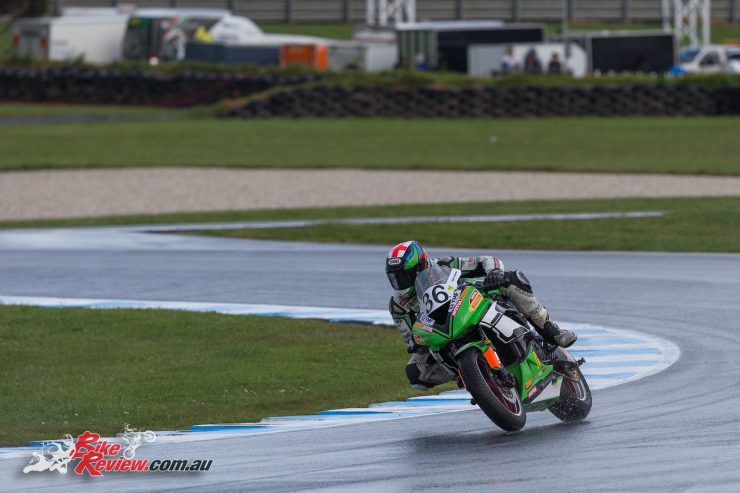 Australia’s Supersport competitors entertained crowds of thousands in the wet this morning after a hard charging Sam Clarke battled his way from the back of the pack to eventually claim victory in race one at the 2016 Michelin Australian Motorcycle Grand Prix.

Forced to cancel their race yesterday, competitors this morning only had one sighting lap to familiarise themselves with the internationally renowned Phillip Island Grand Prix circuit before the lights went out and bikes launched off the grid.

It was an interesting start to the first race for the Supersport competitors as they made their way from pit lane on to a drying track. However, as they rolled around the back section of Phillip Island Grand Prix circuit gearing up for race start, a downpour of rain interrupted things, diminishing any chance of a dry race this morning.

Riders including pole position’s Banhams Racing’s Sam Clarke, JNL Racing’s Luke Mitchell and Cube Racing’s Callum Spriggs made the quick decision pulling in to pit lane and jumping on to their wet bike, resulting in a start from pit lane as the red lights went out. 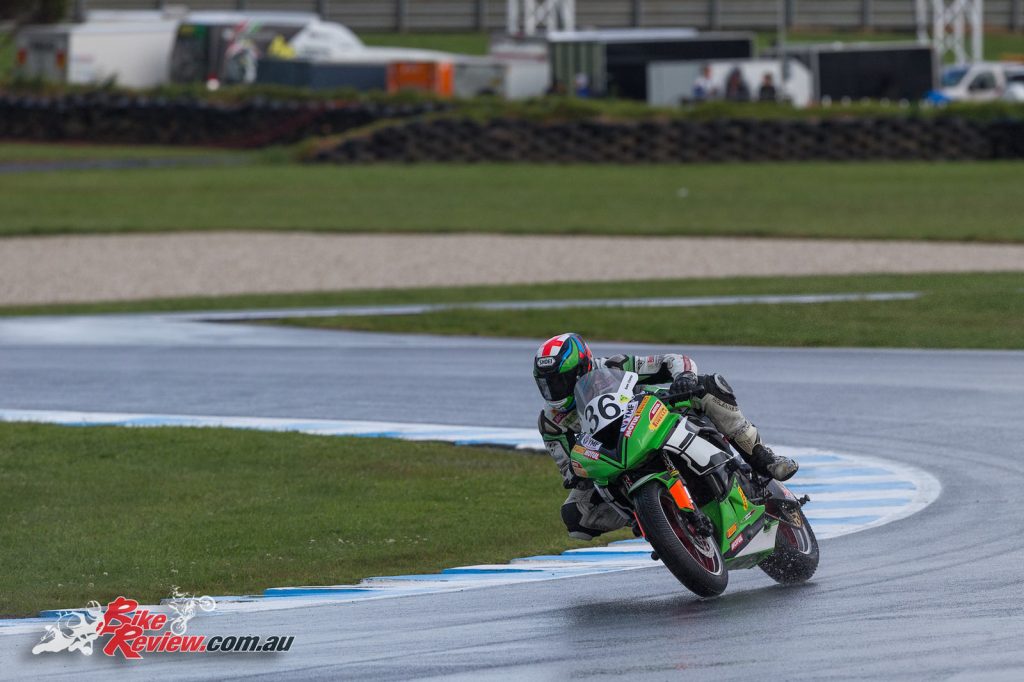 Those who already had wet tyres on and were starting the race on track got the jump leading in to the first corners of race one. With Supersport hopefuls including Clarke at the back of the pack it was the female on track Stephanie Redman who led from second placed JLT’s Jack Gallagher and third placed Next Gen Motorsports’ Ted Collins.

After only two laps the wet weather got the best of Collins, with a crash at turn four seeing his podium position dwindle, but a hard charging Clarke had already fought his way to seventh by the first lap and with the absence of Collins he quickly charged to third, over taking the field with swift moves.

Redman and Gallagher remained in a tight battle from race commencement and although the number 47 machine of Gallagher had the pace to overtake Redman, he couldn’t make a move that would stick and she fought her way back around the JLT rider all in the third lap.

With the pair battling in front, Clarke was gaining momentum from third position to cement a move eventually, but with only five laps to go Clarke was still seven seconds behind.

As the battle for first second and third played out in front, Callum Spriggs had been working his way through the pack and by the end of the third lap he was sitting fourth, 15.002 seconds behind first place, although continually gaining speed behind Clarke.

An interference with a back marker hindered Gallagher’s winning charge dropping back from first placed Redman by 3.287 seconds by the halfway point in the race. Clarke catching the tail of Gallagher still third, while Spriggs and Brendan Wilson rounded out fourth and fifth respectively as they made their way around the circuit.

Clarke wasn’t going to settle for third and unfortunately for Gallagher the gap had diminished and eventually Clarke made his move on Gallagher down the front straight, his eyes now plastered on the leader, Redman.

With only three laps to go Redman’s hopes of winning the first race of the event dwindled as turn five got the better of the young female and a slide off the track cost her first place allowing Sam to slip right in to the familiar race lead.

With Redman out of the running and Clarke pulling a significant gap in the first turns of Phillip Island Grand Prix circuit the top three now – Clarke, Gallagher and Spriggs, were all spaced riding their own race for the remaining two laps.

Clarke looked comfortable crossing the start/finish line to commence the last lap of the race and with positions remaining the same anticipation was in the air for all riders to bring it home in a podium position. And that is exactly what Clarke did, crossing the finish line with a wave of the chequered flag, 4.931 seconds in front.

In his rookie season on board his 600cc machine Gallagher finished race one in second position after a hard fought battle with both Redman and Clarke in front of an international crowd.

Callum Spriggs rounded out the final podium position in the Supersport class. Spriggs was followed across the line by Mark Chiodo, who in the final stages of the race made his way from the back, to seventh, and then moved himself in to fourth for a top five finish. Rounding out the fifth spot was Knight.

Hayden Spinks, Wilson and Mitchell rounded out positions sixth, seventh and eighth, while Peter Brighton and Glenn Nankervis rounded out the remaining top ten positions for race one.

After his race one victory Clarke recapped on the battle sharing that it was difficult with the rain but was happy managing to bring his Kawasaki machine across the line in first.

“It was very difficult, we went out on the warm up lap and then it started bucketing down with rain,” Clarke shared.

“The next plan was to come in and grab the wet bike. Me and a few of the other riders started from pit lane.

“I got out of pit lane at the very back of the field and had to pick my way through. I managed to get to third, and then the next aim was to close down the gap from third to second.

“I got in to second and then it was all eyes on first. Steph unfortunately crashed in front of me, which gave me the lead and then from there it was time to stay consistent. Luckily we crossed the finish line first. I am happy with the result today,” he concluded.

Unfortunately, with the cancellation of racing yesterday due to nasty weather conditions, the Supersport competitors only have one race left tomorrow which is set to commence at 9:05am AEST.

Tomorrow competitors will have one last chance to compete in front of an international crowed at the 2016 Michelin Australian Motorcycle Grand Prix at Phillip Island Grand Prix circuit.