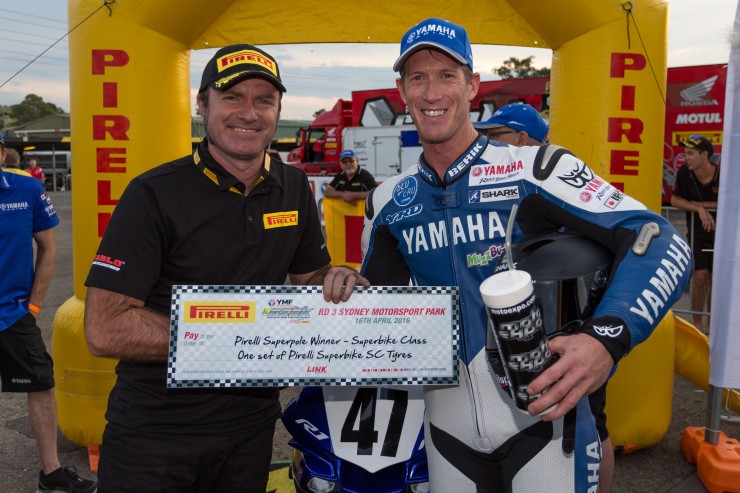 Sydney Motorsport Park today hosted some intense battles between the Yamaha Motorcycle Insurance Superbikes and the Motul Supersport competitors. The dangling carrot of the Pirelli Superpole Award fuelled the fields to put rubber to the track at Round 3 of the 2016 Yamaha Motor Finance Australian Superbike Championship presented by Motul Pirelli.

With the notion to record the fastest qualifying lap it was left up to the competitors and their machines who on a performance for the crowds, all going toe to toe for pole position. 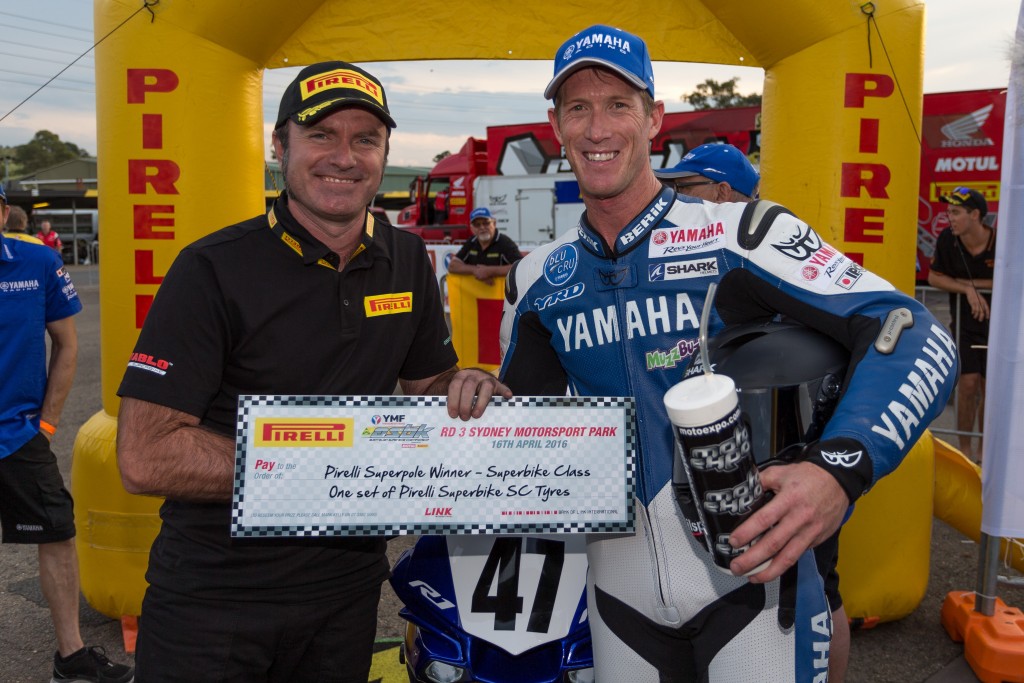 The Yamaha Motorcycle Insurance Superbikes hit the Sydney Motorsport Park circuit for the first time this morning for their opening practice session at Round 3 of the 2016 Yamaha Motor Finance Australian Superbike Championship presented by Motul Pirelli. At the conclusion of the 20-minute session, Yamaha Racing Team’s Glenn Allerton emerged as the man to beat, setting the pace in practice with a 1:30.777 lap time.

The first qualifying session for the YMI Superbike class was held just ahead of the lunch break, where competitors were provided with 20 minutes to put down their fastest times. And when the Superbike class exited pit lane, spectators were left questioning who the fastest man of the moment would be.

The battle for top position was heated from the start; DesmoSport Ducati’s Mike Jones made it evident early on that he was the man to chase. However at the half way mark in the session, the Yamaha Racing Team trio Wayne Maxwell, Allerton and Cru Halliday emerged from their respective garages with one clear mission in mind.

At the conclusion of the session it was Yamaha’s Maxwell who managed to lay down the fastest lap for the session, with a time of 1:30.503, relegating Jones to second in Q1 with a 1:30.856 lap time. This morning’s fastest rider in practice, Allerton (1:30.891) was just a fraction off the pace of Ducati mounted Jones, by only .035 seconds, eventually wrapping up the session in third position.

In the second qualifying session for the YMI Superbike class, the top 10 riders were all within one second of each other. However it was Maxwell (1:30.293) who simply couldn’t be caught, remaining at the top of the time sheets at the conclusion of the second session. The Yamaha dominance continued with Allerton posting the second quickest time with a 1:30.732 lap time with only six minutes remaining, while Ducati mounted Jones wrapped up Q2 in third with a 1:31.060 lap time.

Falzon however, was missing from group opting out of the 10-minute Pirelli Superpole session, preserving his tyres for racing tomorrow.

There was no denying the power of the Yamaha R1 as Maxwell manoeuvred his machine around Sydney Motorsport Park flawlessly, taking almost half a second off his previous qualifying time, concluding the session with a 1:29.905 lap – the only Superbike to reach under 1:30 seconds today.

Maxwell had plenty of reason to celebrate at the conclusion of day one of round three of the ASBK, sharing his excitement in taking out his second pole for 2016.

“I am really happy to be able to claim my second pole of the year. It’s probably better than the first pole really, it’s not only that we have pole position but we have reasonably consistent pace,” said Maxwell.

“The bike has been holding up reasonably well, we have been changing stuff each session over the last few days, we changed a lot of stuff that didn’t work which is frustrating, but I have better rear and front feeling, so I think we are in a good position for tomorrow.

“I am heading into tomorrow reasonably confident, just as confident as I was at Wakefield, but I ended up on the ground, so you just have to remember that and just keep going,” concluded Maxwell.

Practice this morning for the Motul Supersport competitors showcased the depth of talent in the Supersport field. At the conclusion of the 20-minute session, Luke Mitchell managed to hold off 25 fighting competitors, and set the pace for Round 3.

When the Motul Supersport machines headed out for their first qualifying session, it was anyone’s guess who was going to top the times.  With a pole position and the Pirelli Superpole award up for grabs, Cambridge Olivier managed to lay down the fastest time of the session with a 1:43.176 lap.

When the Motul Supersport class headed out for their second and final qualifying session, all eyes were on Olivier. With another 20 minutes on the clock to post the fastest time, the pressure was on. However it was Mitchell who managed to post a time of 1:34.489 followed by Spriggs with a lap time of 1:34.551. Rounding out the top three times for the second session saw Sam Clarke finish with a 1:34.705 lap time.

When the times were combined it was Olivier who remained fastest for the day with a 1:34.176 lap time and claiming the Pirelli Superpole Award at the conclusion of both  sessions, while Guenther took second and Spriggs was just behind with a 1:34.405 lap time in third.

Olivier shared his thoughts, moments after stepping off his bike.

“We went into Q1 and we were quite fast, and coming into Q2 the track wasn’t as grippy, and I saw that no one was improving on their times from the first session,” he said.

“I didn’t want to push too hard if I didn’t have to, and I especially didn’t want to throw the bike down the track, so I am very happy with first position.

“It’s a great feeling heading into tomorrow’s racing in P1. Tomorrow’s weather looks like there may be some rain, I have had good results in the past in the wet and hopefully we can back it up tomorrow,” Olivier concluded.

Both the Motul Supersport and Yamaha Motorcycle Insurance Superbike classes will once again battle it out tomorrow, when racing commences for Round 3 of the Yamaha Motor Finance Australian Superbike Championship presented by Motul Pirelli at Sydney Motorsport Park.

For more information on the Yamaha Motor Finance Australian Superbike Championship presented by Motul Pirelli, head to www.asbk.com.au or like the ASBK on Facebook for live race results and to keep up do date with all the latest racing news this weekend.