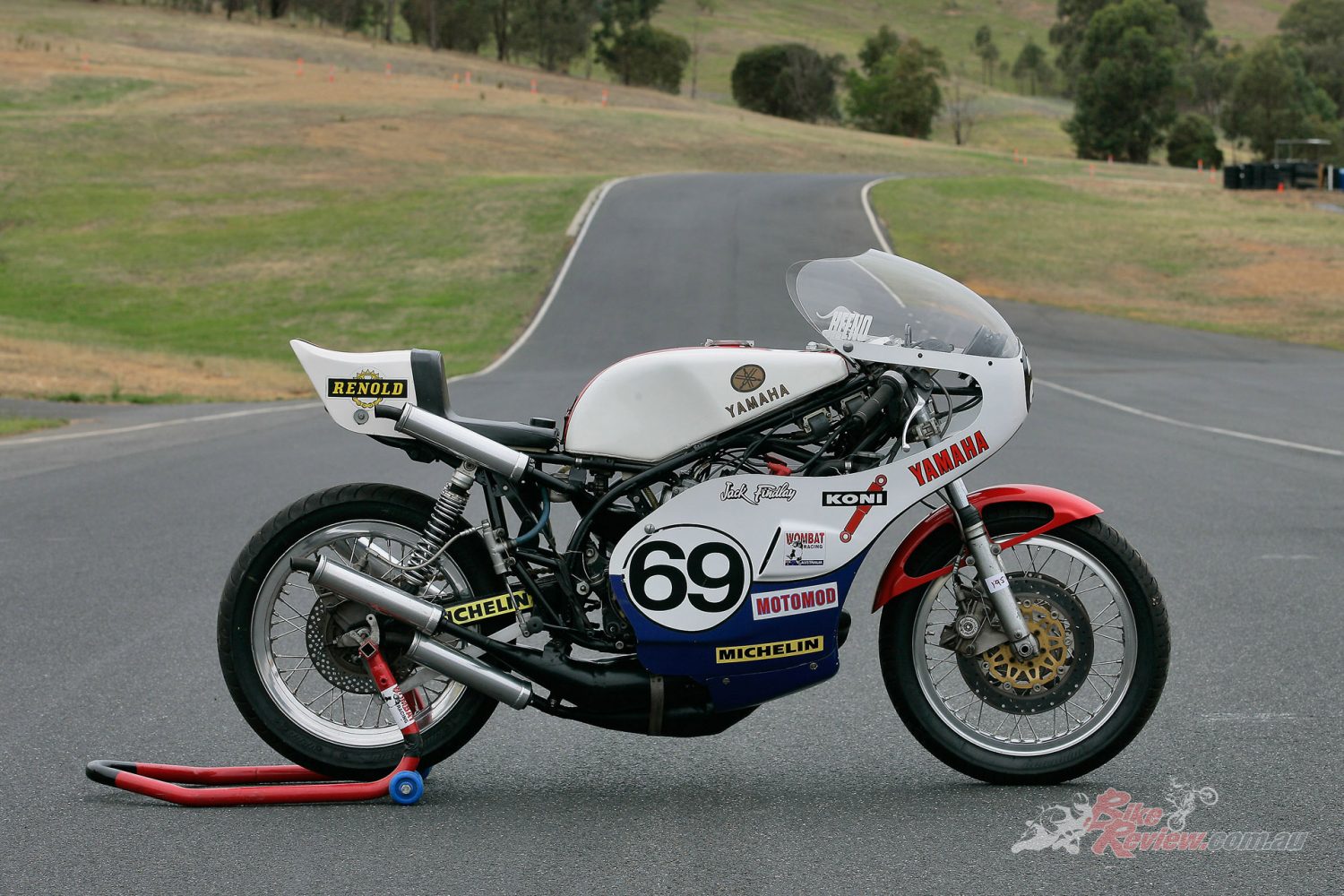 If you've just read about the Jack Findlay TZ750B, here is some background on the amazing TZ750 to help further understand the machine... Words: Alan Cathcart.

The TZ750 represented the most performance for the least money that the motorcycle world is ever likely to see. It dominated the Formula 750 class (see the test on Jack Findlay’s winner), and became a much-loved and cost-effective privateer for over a decade… 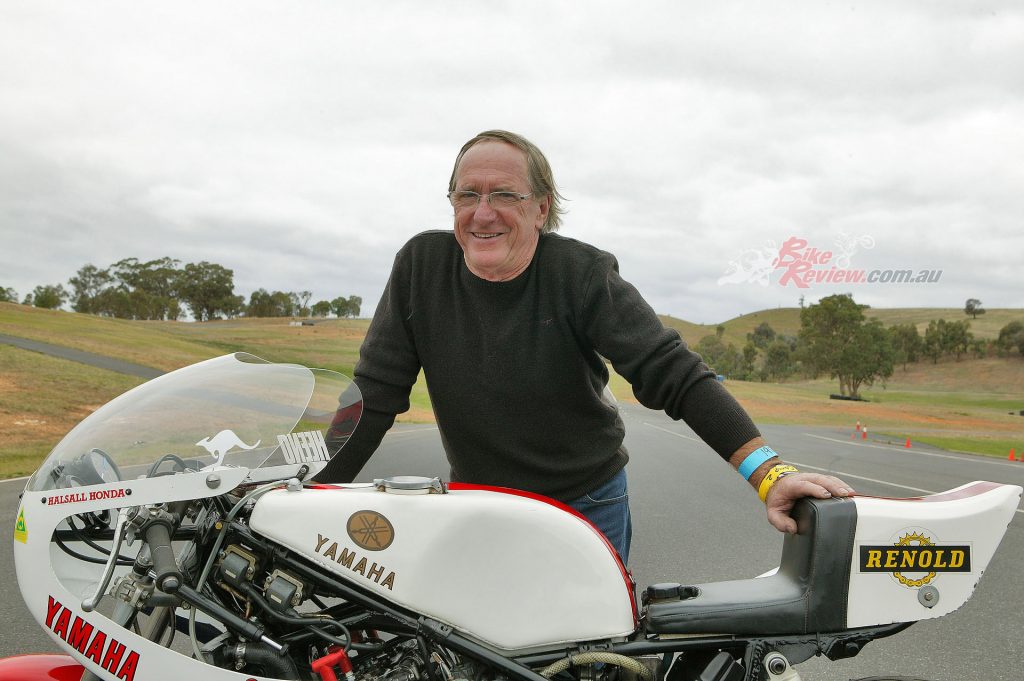 Noel Heenan and wife Victoria brought the bike back to the track for all to hear, smell and enjoy!

Yet for a bike which was to become so popular and so competitive, for so long, the TZ750’s debut could hardly have been more controversial: there was even talk at one time of having it banned. Its genesis was the GL750 prototype road bike unveiled at the Tokyo Show in October 1971, an in-line four-cylinder two-stroke Superbike claimed to produce 70hp@7000rpm – a lot back then, when the much heavier 900cc Z-1 Kawasaki gave out 82 bhp.

This clearly represented Yamaha’s chest-thumping corporate response to Suzuki’s TR750 two-stroke triple introduced one year earlier – but unlike the Suzuki, which duly entered production in 1972 and formed the basis of the XR11 factory racer with which Barry Sheene won the inaugural FIM Formula 750 Prize in 1973, the prototype Yamaha disappeared after the show, and was never seen again – and certainly never reached production. 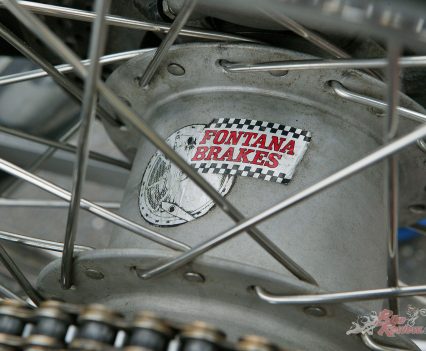 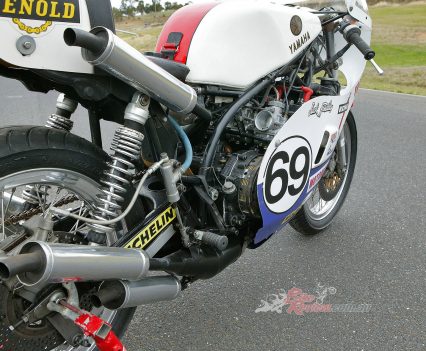 But when in the spring of 1973 Yamaha engineer Naito and designer Matsui produced what initially seemed to be a 700cc version of that year’s factory 500GP bike, as raced with success by the great Jarno Saarinen before his untimely death at Monza in May, the category they were aiming at was the production-derived Formula 750 class.

With a minimum run of 200 machines required to meet F750 regulations this category had hitherto been reserved for racers that, however distantly, were recognisably derived from road models. But the new four-cylinder Yamaha racer changed all that, and though the competition protested mightily that F750 was meant to be for road-based machines, the FIM rules didn’t actually SAY that, which therefore meant, said Yamaha and their lawyers, that they could be out-and-out racers, too.

Indeed, by the time the Yamaha TZ750 made its victorious race debut in the hands of Kiwi rider John Boote at an NZ Championship round at Ruapuna in January 1974, the first of the 213 examples of the first-year crop of TZ750A machines were already in the hands of paying customers.

Though often incorrectly termed a TZ700, that first TZ750A was indeed only a 694cc machine, achieved in essence by bolting two pairs of watercooled TZ350 cylinders to the magnesium crankcase of the works OW20 YZR500 GP bike – which itself had effectively comprised a pair of TZ250 cylinders and cranks joined together on a common crankcase. The TZ750A and the earlier TZ750B models had the same 64 x 54mm dimensions as the 350 twin, but subtly revised porting with five transfers and a 1.5mm lower exhaust, in order to tame what had reportedly been more than 130bhp in derestricted form – a huge amount of power for the era, especially with the available tyres, and good for a top speed in testing of over 290km/h. Yamaha’s quoted 90bhp@10,500rpm for the TZ750A was still impressive, but unlike the early piston-port TZ350, the TZ750 family featured reed valve induction from the very start, a four-petal format derived from Yamaha’s successful off-road singles. But the extra performance over anything previously available to privateers, coupled with a rather flimsy tubular steel chassis with twin-shock rear suspension, made the handling somewhat lurid at times. 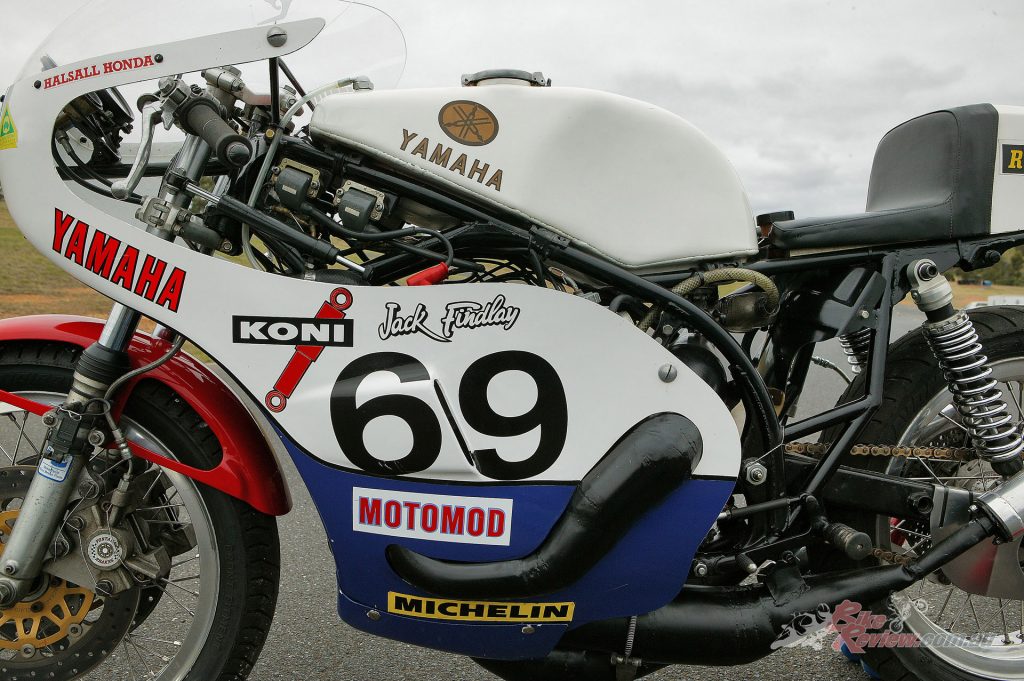 The TZ350-inspired ancestry of the across-the-frame in-line four-cylinder motor is evidenced by the use of twin 180-degree crankshafts (resulting in cylinders 1 and 4, then 2 and 3, firing simultaneously), which sit side by side within the vertically-split crankcases, and are coupled together via a 10mm gear on the inboard end of each crank. These engage a double-width rear-mounted 20mm central pinion, which transmits drive to the six-speed gearbox via a massive 13-plate dry clutch mounted on the right, with this same primary gear also driving the water pump and Hitachi CDI generator, as well as a transmission oil pump.

Engine lubrication is however provided by petroil mix, with four 34mm Mikuni CV carbs mounted behind the cylinders. Although the format of the engine didn’t change throughout its life, this early version in the Findlay TZ750B originally had the four expansion chamber exhausts mounted directly beneath the engine, to allow the motor to be raised in the frame to give extra ground clearance, though at the cost of flattening the mid-section of the two inner pipes.

Barry Sheene had won the first FIM F750 Cup in 1973 on the XR11 Suzuki TR750 works triple, before the advent of the TZ750A – but the new Yamaha made its rivals’ triples seem obsolete. The 213 examples of this 694cc version built in 1974 completely dominated F750 racing in the TZ750’s debut season, Australian privateer customer John Dodds winning the three-race FIM World Cup title on a production bike, ahead of Patrick Pons on a similar TZ750 entered by the French importer Sonauto,  with fellow-Aussie Jack Findlay third on a Suzuki triple. But at the end of the year Yamaha tried to wipe out any chance Suzuki or Kawasaki might have had of catching up by producing the TZ750B for 1975.

For this was a full 748cc in capacity, thanks to cylinders bored out to 66.4mm from 64mm, producing an extra 15 bhp – so, 105bhp still at 10,500 revs – and especially more torque, making the bike good for a top speed of 280km/h. These bikes were otherwise virtually identical to the A model, except for improvements in clutch-plate material, and gussets welded to the outside of the pipes to delay them cracking. However, rather confusingly, a further 46 examples of the 694cc version were made under the TZ750B label from October ’74 onwards, before Yamaha switched mid-winter to building the full-size variants, still designated as B-models.

The initial batch of such bikes numbered 65 in total, but it was on one of the slightly earlier 694cc TZ750B models that Jack Findlay duly clinched that year’s F750 title. Regular maintenance was rewarded with reliability – fitting new pistons and rings for each race was cheap insurance, and crank life between rebuilds was 1,000km. But you had to keep an eye on the reeds, which had a tendency to crack, and chain stretch was always an issue – several DNFs came when a chain jumped off the rear sprocket… 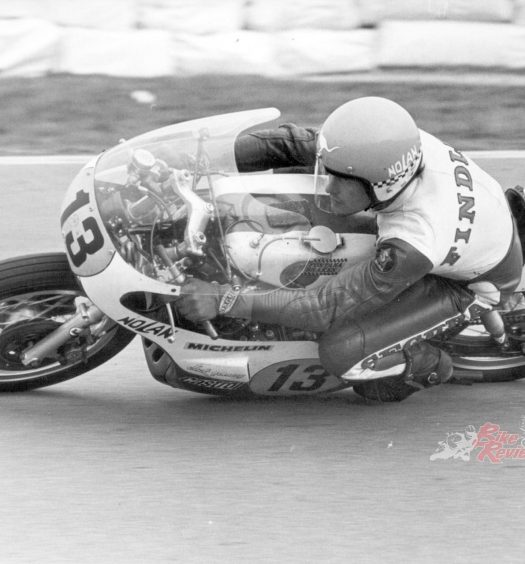 Jack Findlay: A history lesson on the legend and his TZ750

Read More
Jack Findlay: A history lesson on the legend and his TZ750