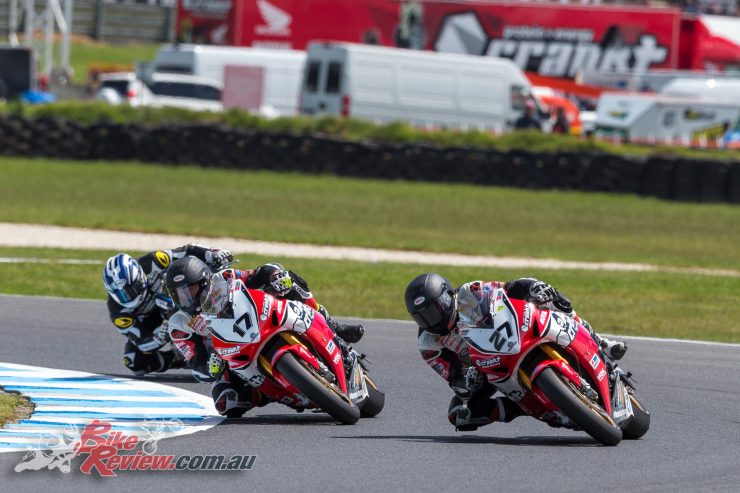 Signalling the commencement of their second race for the weekend it was second on the grid Knobby Underwear Suzuki’s Brayden Elliott who got the jump off the start, however a determined Crankt Protein Honda Racing Team’s Troy Herfoss was eager to start the race off well, quickly relegated the Suzuki rider taking the lead.

Crankt Protein Honda Racing Team rider Jamie Stauffer slotted behind in third, painting the picture for the battle ahead. Team Apex Motorsports’ Josh Waters made his way to fourth off the line, while Michael Blaire moved in to fifth, after only one lap in the books. 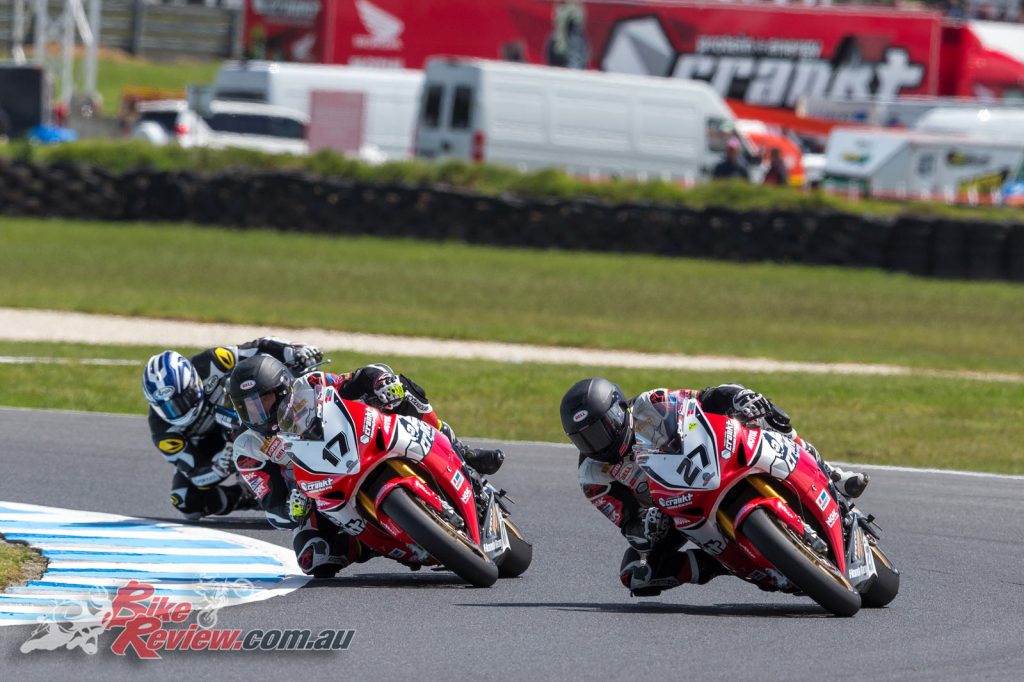 Herfoss eager to remain in front for the next seven laps lengthened his gap on team mate Stauffer who also made a move in to second over Elliott around the opening corners of lap two. Elliott third, was now under fire from fourth placed Waters biding his time before making a pass on lap three, relegating the Elliott another position.

The battle playing out on track was for the top four positions as they had significantly lengthened their lead from fifth place rider Blaire by lap three. Waters now eyeing the rear wheels of Herfoss and Stauffer who had pulled a gap and were locked in an intense battle.

Stauffer had nothing to lose this weekend challenging his team mate over the start/finish line on lap four excelling at the passing manoeuvre to take the lead. Now steering his team mate Herfoss around Phillip Island Grand Prix circuit Stauffer was on his feet with consistent pressure from his fellow Honda mounted rider.

Reeling in the front pair, Waters had marginally closed the gap on the battling Stauffer and Herfoss who each stole the lead multiple times throughout the remaining lap. Waters was now in contention to bump up his position on the podium.

With only two laps to go Stauffer hit the gas and across the straight had developed a three second gap over Herfoss and Waters, however coming out of Honda corner a wrong move saw him run wide diminished his gap instantly now once again under fire from his team mate.

At the showing of the last lap board Stauffer had the lead by only .377 seconds and as the chequered flag waved the comfortable looking Honda mounted rider sped across the finish line in the number one position.

Waters still not ready to give up made the trying last move on this year’s Australian Superbike Champion Herfoss and with one last twist of the throttle, he stole second position seeing Herfoss relegated to third.

Despite a fantastic start off the line Elliott finished race fourth allowing Blaire to take fifth.

Stauffer spoke post-race sharing his struggles to get on the podium all year and despite the tricky conditions, he was happy to get a win.

“It has been quite good to win here. I have struggled all year, this has been my worst year I have had,” Stauffer shared.

“It was good to get out there and get a win. It was tricky conditions; we haven’t had any dry time really this weekend. We ended up coming away with the win and hopefully we can do it again tomorrow.

“I haven’t had anything to lose all year and I have been struggling to get on the podium. The bike was working for me in that race, after a couple of changes. The bike felt good,” Stauffer concluded.

For a full list of results head to www.computime.com.au.