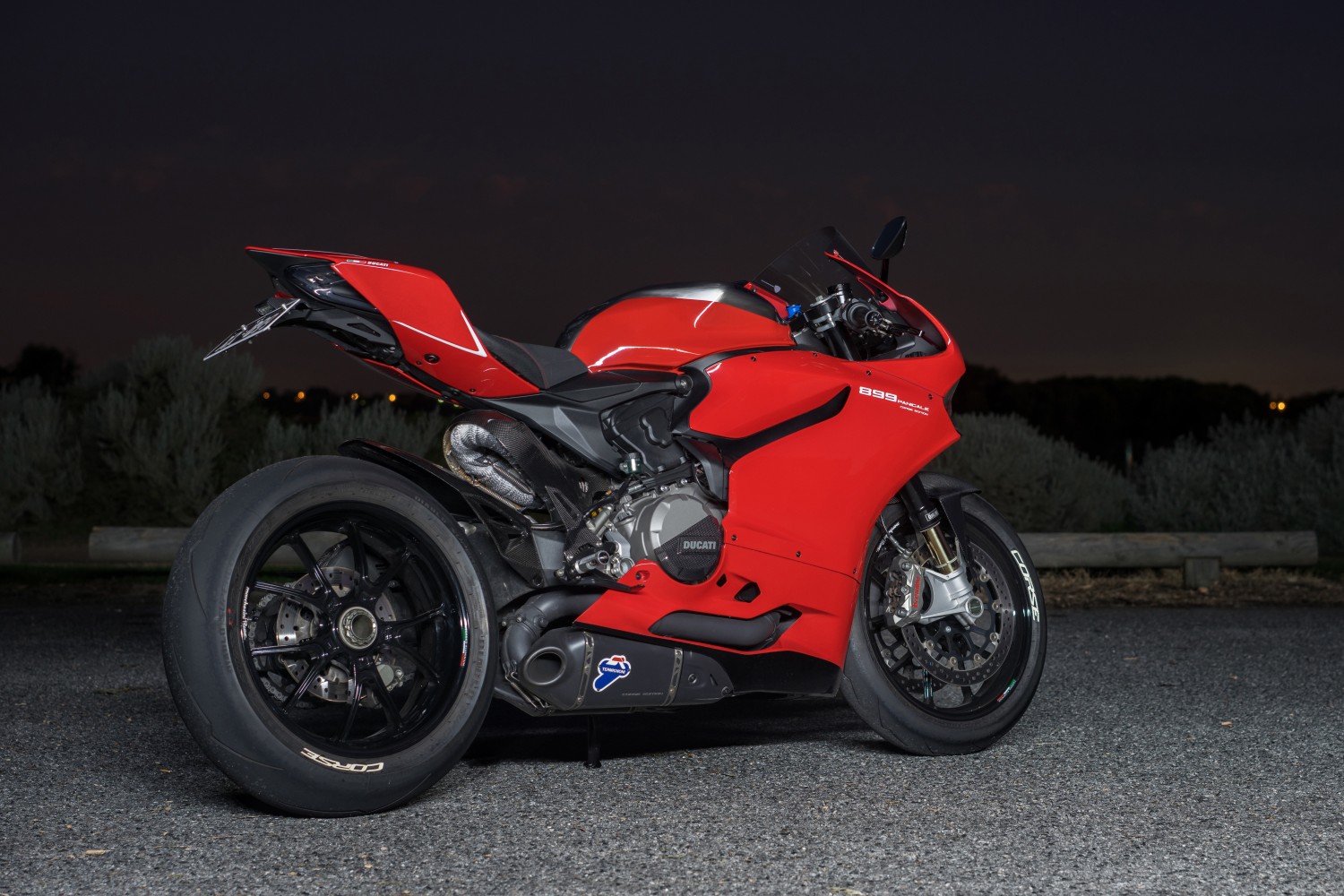 Ducati’s 899 Panigale was a machine that was launched to great success, with the iconic brand taking a more road centric approach in designing the machine, with a price tag that was very competitive for an Italian steed.

The 899 Panigale is still an impressive race derived machine – make no mistake, power is staggering, with the bike’s light weight and monocoque chassis borrowed directly from the 1199, however this was a motorcycle that unlike its larger sibling made for a great road bike. 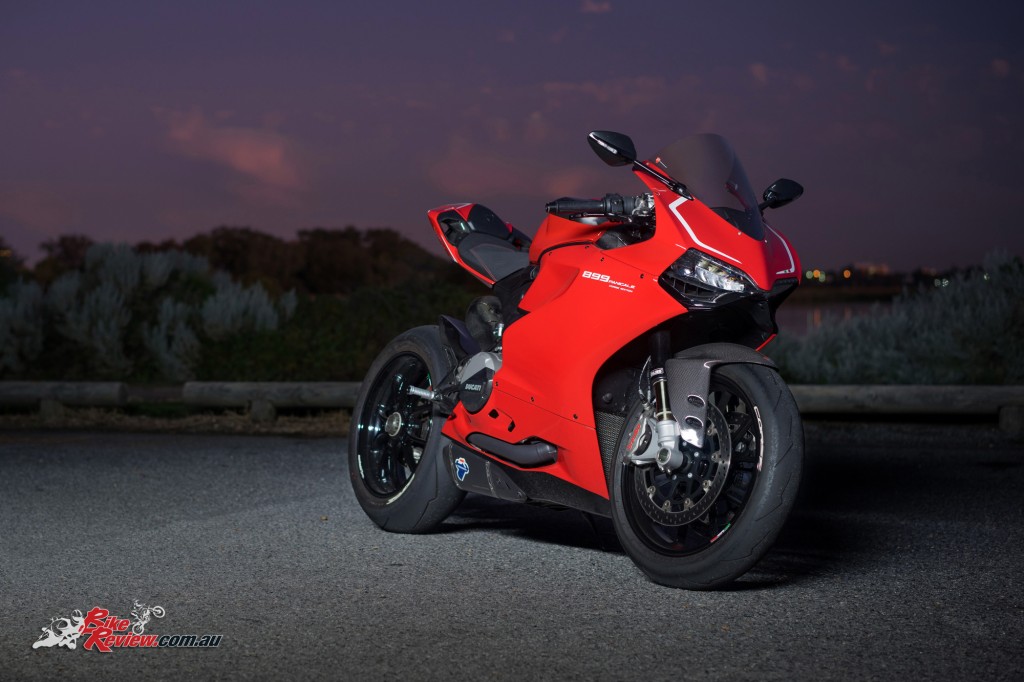 The 899 Panigale may be a relatively inexpensive road-going superbike from Ducati, but that hasn’t stopped Chris from upgrading it to full Panigale spec. Or a ‘Corse Edition’ as he calls it.

The 899 Panigale is built around the 898cc Desmodromic 90° L-twin using a bore and stroke of 100mm x 57.2mm, with power a claimed 148hp, and known as the 899 Superquadro. The reasoning behind the engine was maintaining the explosive Ducati power while offering a broad spread of usable torque and drive, where the 1199 – particularly on the road – could be a real handful, especially where road conditions were questionable.

The 899 Superquadro retains the many typical Ducati performance features however, including the Desmodromic valve system, oval throttle-bodies, RbW and the 1199’s secondary air system, not to mention the full electronics package including ride modes, three level ABS, eight level traction control, a quick shifter as standard and Electronic Braking Control. Even the gearbox was brought over from the 1199, with final gearing more suited to the road. 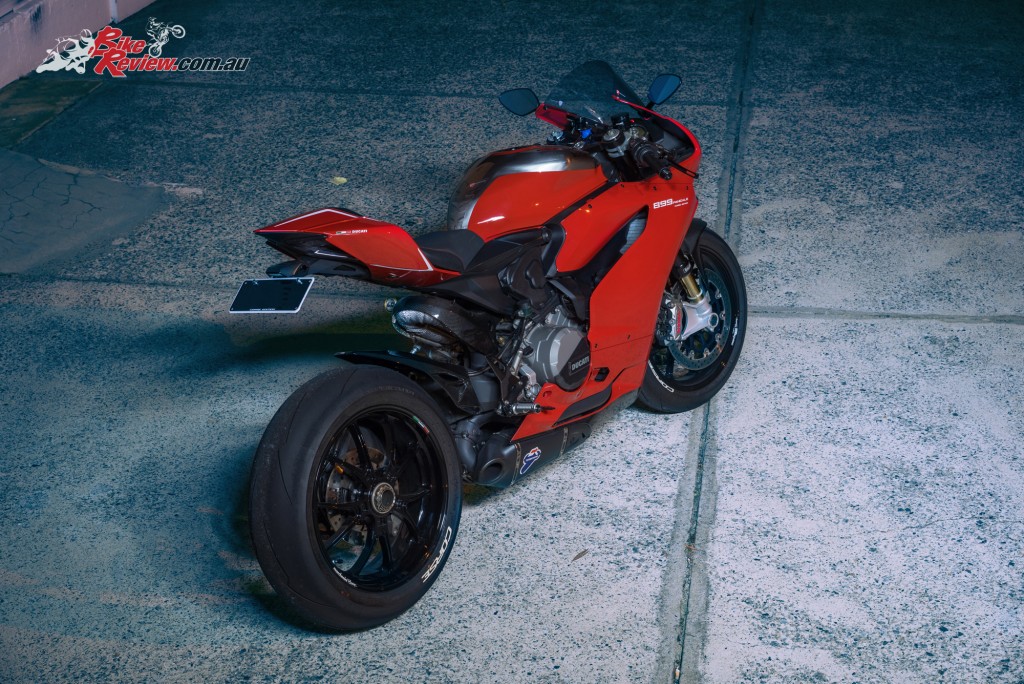 The tail has been greatly tidied with the Ducati Performance tail tidy and an integrated taillight.

While the 899 Panigale did share the monocoque chassis, incorporating the airbox and using the Superquadro as a fully stressed member, the forks are as standard a set of 43mm Showa Big Piston forks, albeit fully adjustable, with a Sachs rear suspension unit.

Brakes were of course full Brembo offerings with Bosch ABS, but perhaps the most noticeable feature when compared to the 1199 was the 899’s dual sided swingarm – no doubt a feature helping with the 899’s competitive pricing, along with the bike’s Mitsubishi EFI system.

For the owner of this stunning custom Ducati 899 Panigale, the fact this bike was for him quickly became obvious, shortly after its initial release.

“When the first reviews came out, it was clear this was the bike for me,” Chris explained, adding, “I always wanted a Duke and your first Duke has to be red and a super sport.”

“I’m not a white-knuckle rider either, so the 899 Panigale was plenty big enough for my first superbike!”

Definitely a wise choice, with the 899 Panigale offering exceptional performance, with much better road manners to boot.

With the choice made Chris pulled the trigger, and didn’t have long to wait, “I ordered mine a few months after the first release and only had to wait about a month for it to arrive at my local Ducati dealer.” 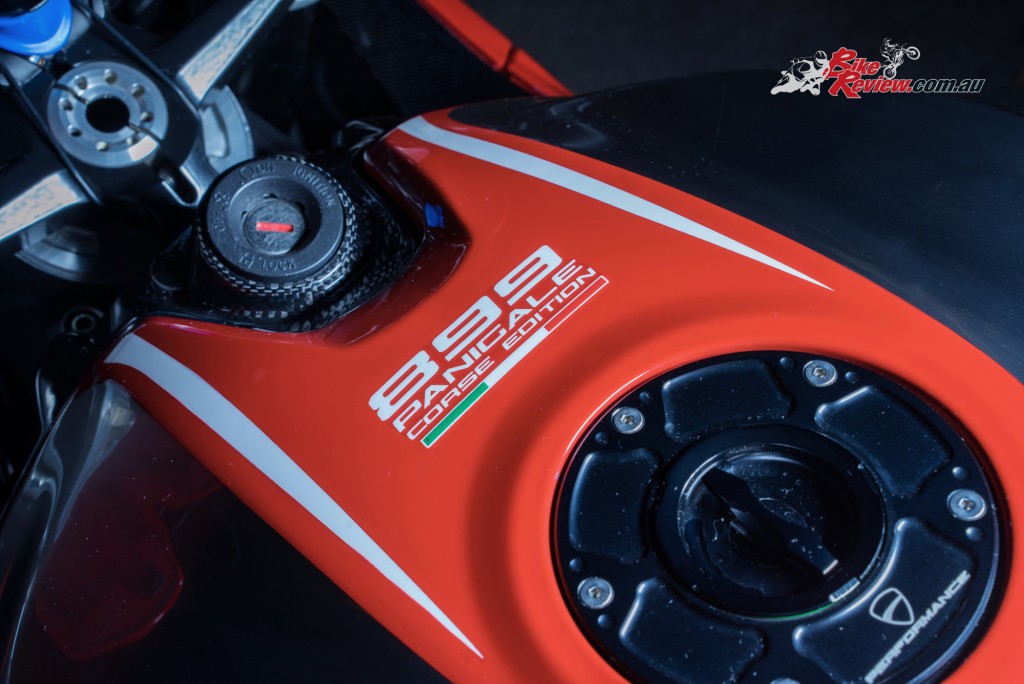 No doubt the first thing you’ll notice with this custom 899 Panigale is the paint scheme, which Chris settled on after discussion with his mechanic, Anthony from Corse Motorcycles, and Nat, taking inspiration from their favourite Ducatis, such as the Tri-colour, Type R and Superleggera.

As with the entire build the paint scheme is subtle, with white detailing on the nose and tail adding definition to the traditional Ducati red, while the tank has seen a bit more attention.

“I had the original metal tank soda blasted and custom painted,” explains Chris, “With the custom decals all painted into the clear coat – similar to a 1199 R.”

The brushed metal effect on the top of the tank is certainly eye-catching, especially on the bike’s mainly Ducati red and blacked-out colour scheme, which includes under the lights being painted in gloss black, as well as the lower fairing – in line with the exhaust and the tail, behind the rider’s seat. 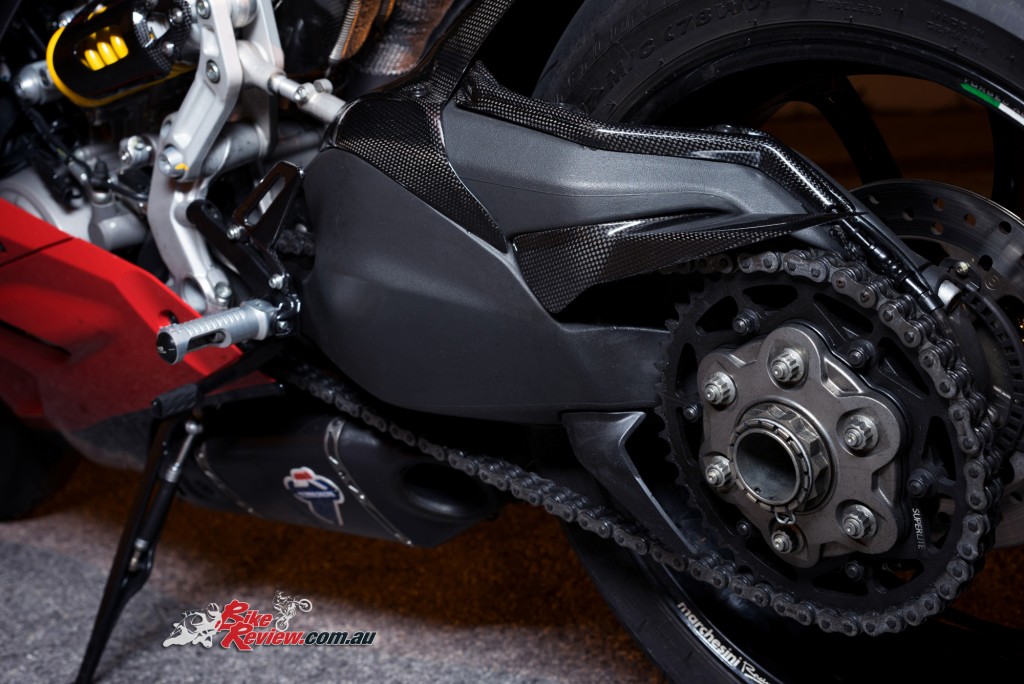 A 1199 Panigale swingarm now adorns this 899, with fitment relatively easy, but requiring a new front sprocket and chain to suit the 1199 rear sprocket pitch.

For the true Ducatisti the most iconic feature on this build will no doubt be the swingarm though, which is a single-sided item, more in keeping with the 899 Panigale’s larger siblings, and does in fact come from a Ducati 1199 Panigale.

Chris sourced the swingarm from eBay, and admitted that fitment wasn’t all that difficult with the main modifications required being a new chain and sprocket to match the pitch of the 1199 swingarm sprocket. 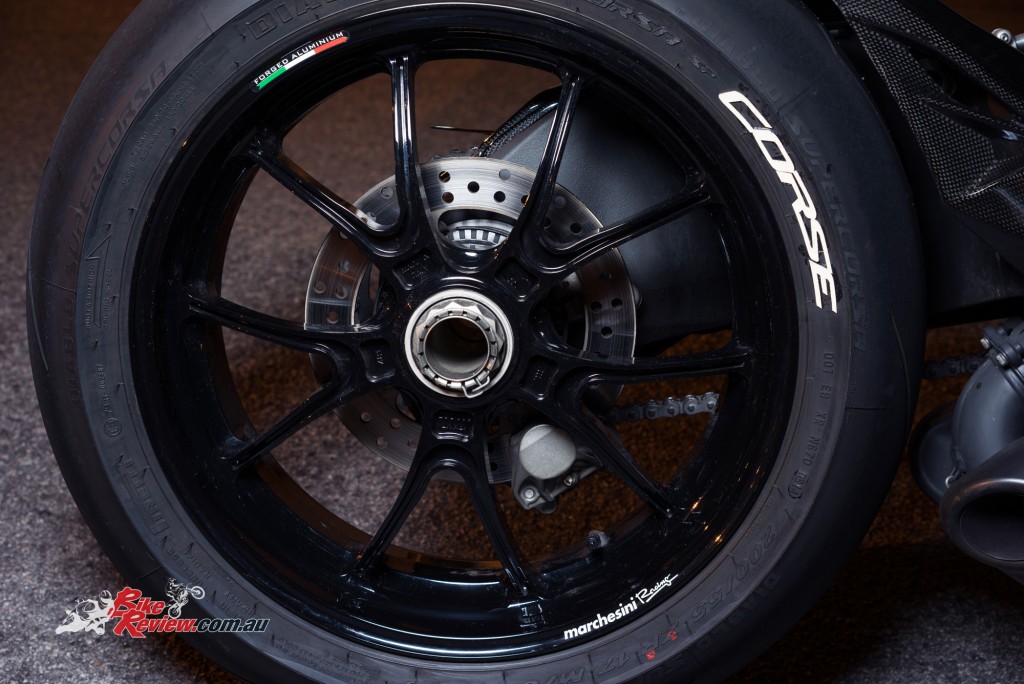 With the new swingarm proudly displaying the rear wheel, Chris also swapped out the standard 10-spoke lightweight wheels for a stunning set of Marchesini forged aluminium wheels in black, while adding Corse stickers to his Pirelli Diablo Supercorsa tyres.

The standard Brembo braking package including three-mode Bosch ABS was retained, with the dual Brembo Monobloc M4.32 four-piston calipers on 320mm rotors on the front and a 245mm rear rotor grasped by a two-piston Brembo caliper on the rear. 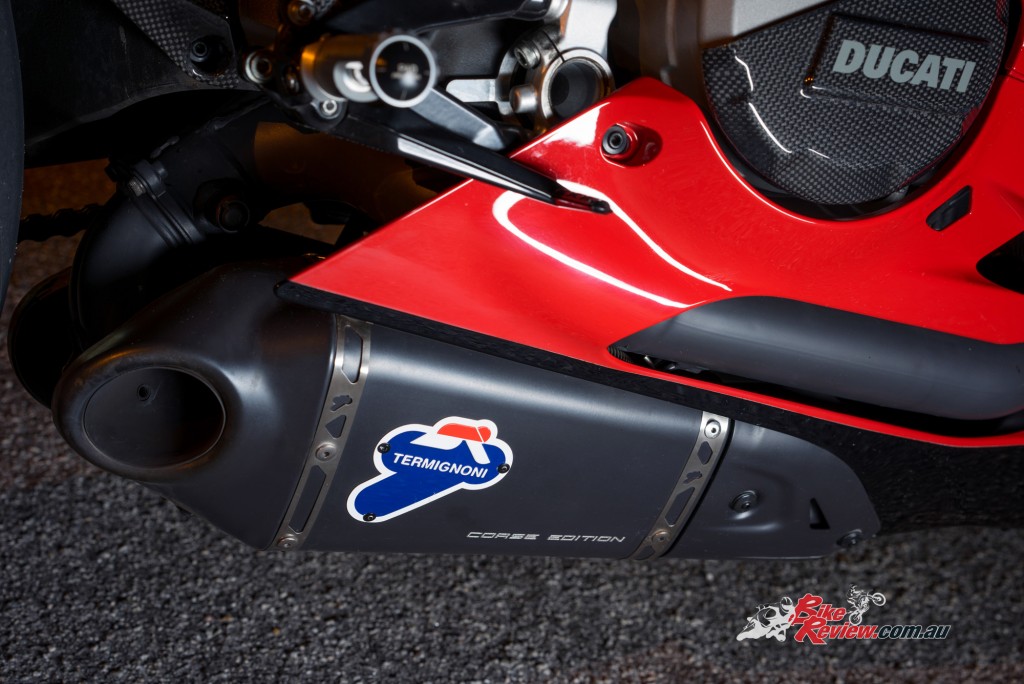 Termignoni cans add plenty of bark to go with the 899’s standard bite. It’s a crazy fast machine and one that could easily land you in trouble with the law, for a simple twist of the wrist.

This provides plenty of stopping performance, while the engine has been left alone, apart from the addition of a set of stunning Termignoni cans, anodised black and laser etched with ‘Corse Edition’, as well as a tune to suit.

What helps set apart this custom build is of course the plethora of small details, with a swathe of Ducati Performance accessories, which include levers, reservoirs, a tinted windscreen, fuel cap, integrated tail lights and tail tidy, plus the carbon-fibre exhaust cover and mud guards. 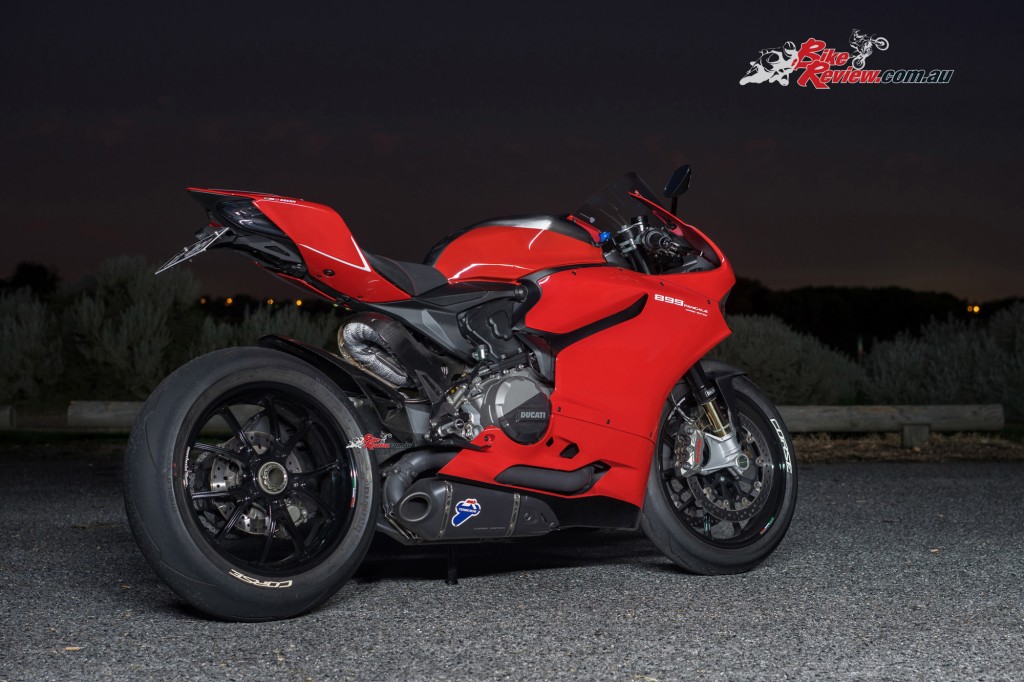 The exhaust under the tail and exhaust guard has also been wrapped to help reduce the amount of heat transferred towards the rider and into the nearby carbon-fibre guard, while a 1199 clutch cover was modified to suit the 899 and lacquered for a pristine finish, before being fitted.

The final modifications are the addition of 1199 R LED headlights, carbon-fibre swingarm covers and a set of Rizoma pegs on the standard rearsets, with the end result a stunning but understated custom 899 Panigale, with a level of detail that any obsessed motorcyclist can appreciate.

Subtle details have made this 899 Panigale into an even more impressive looker than the original, which is a true compliment.

“Anthony, my mechanic, has put months and months into the bike and it was a labour of love,” explains Chris, with no further modifications planned and an estimated $20k spent on the bike so far.

We couldn’t draw Chris on what he thinks it would be worth – which is always a contentious issue with custom builds, but that the end result was worth it is obvious from his pride in the bike. 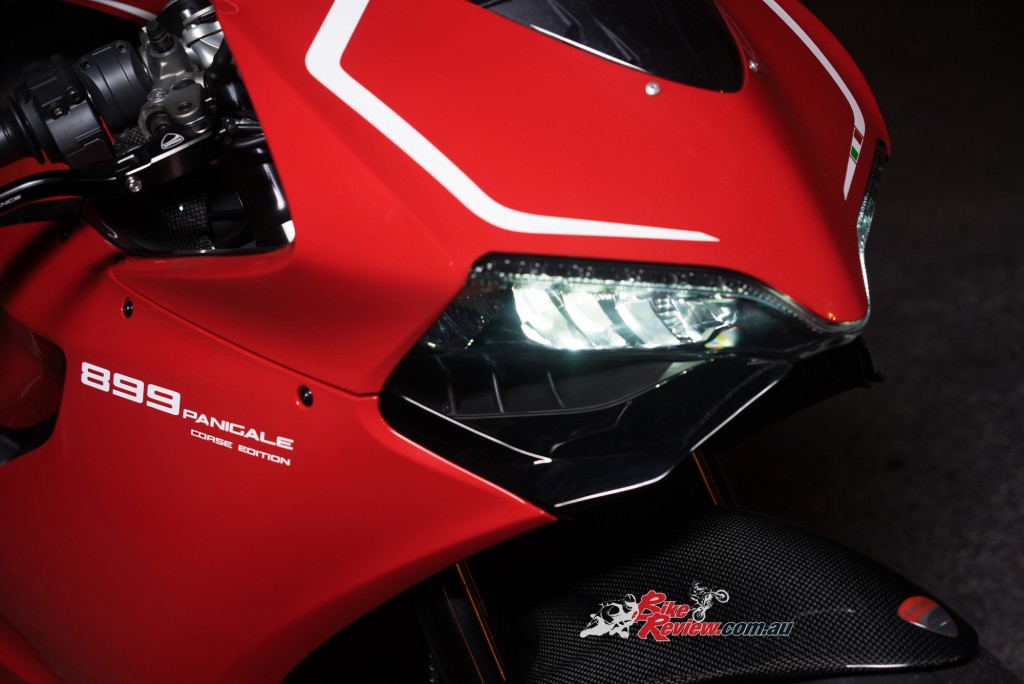 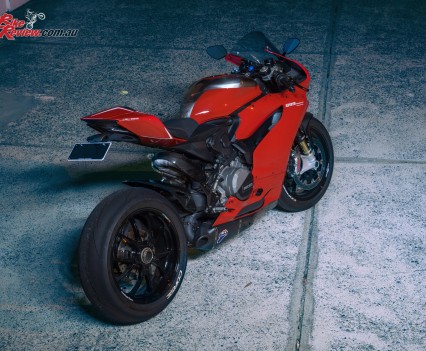 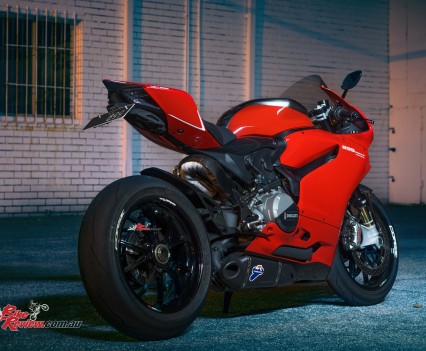 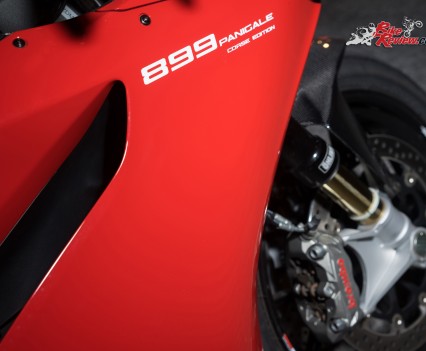 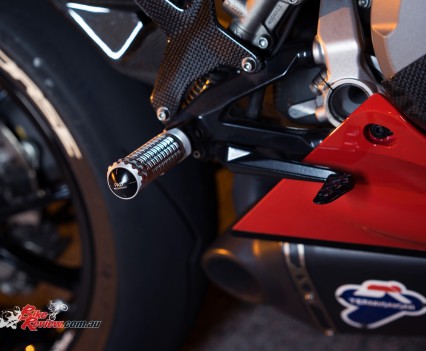 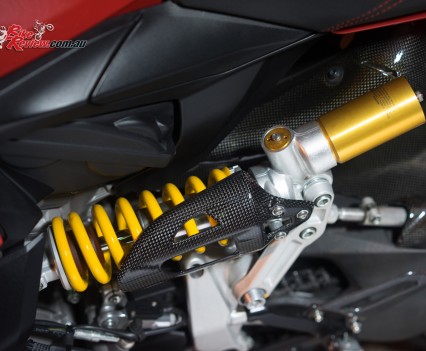 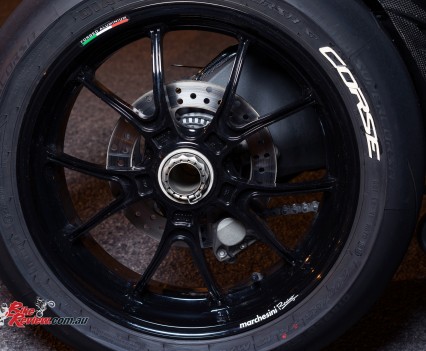 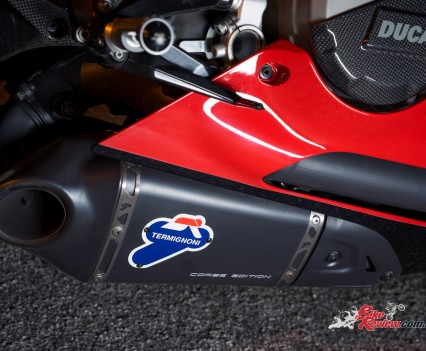 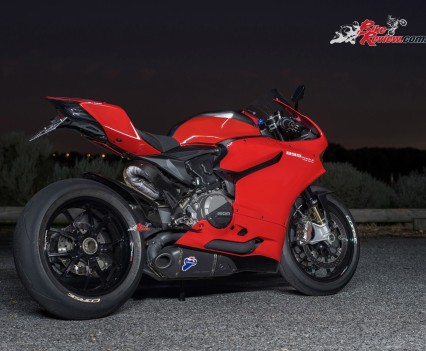 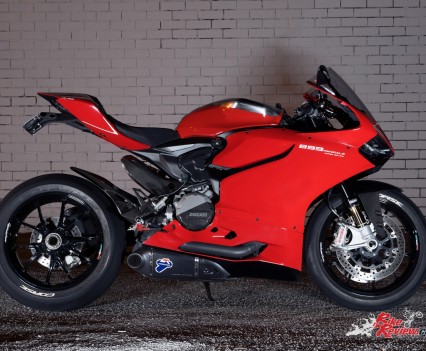 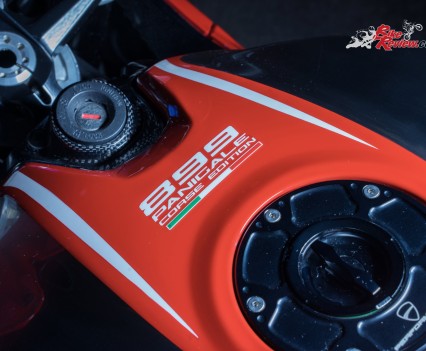 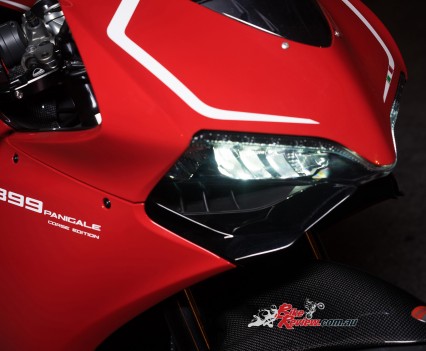 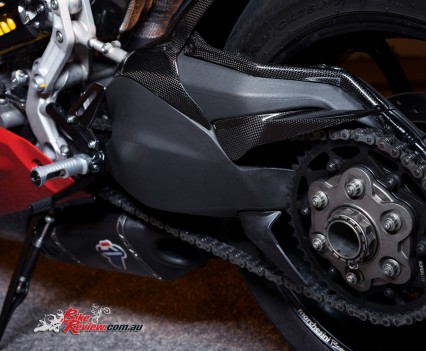 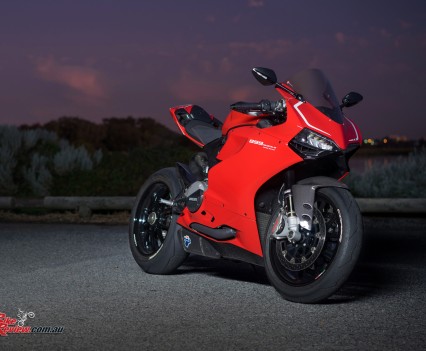 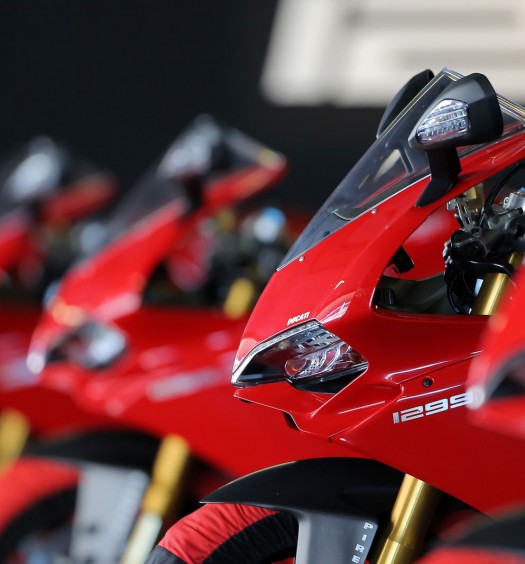 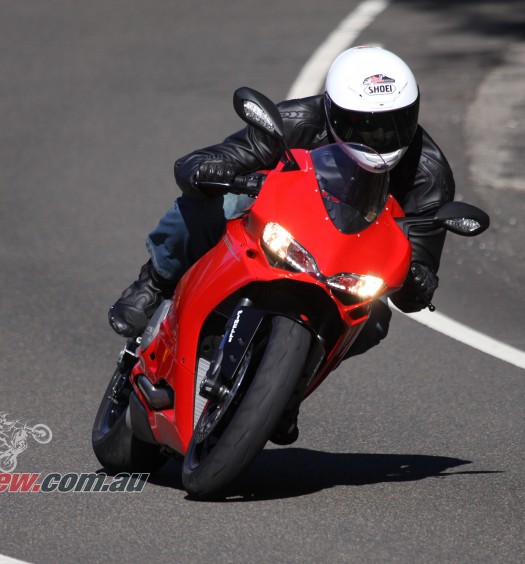 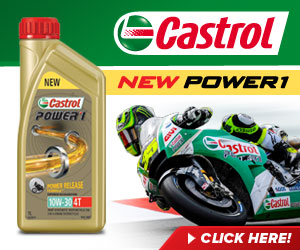