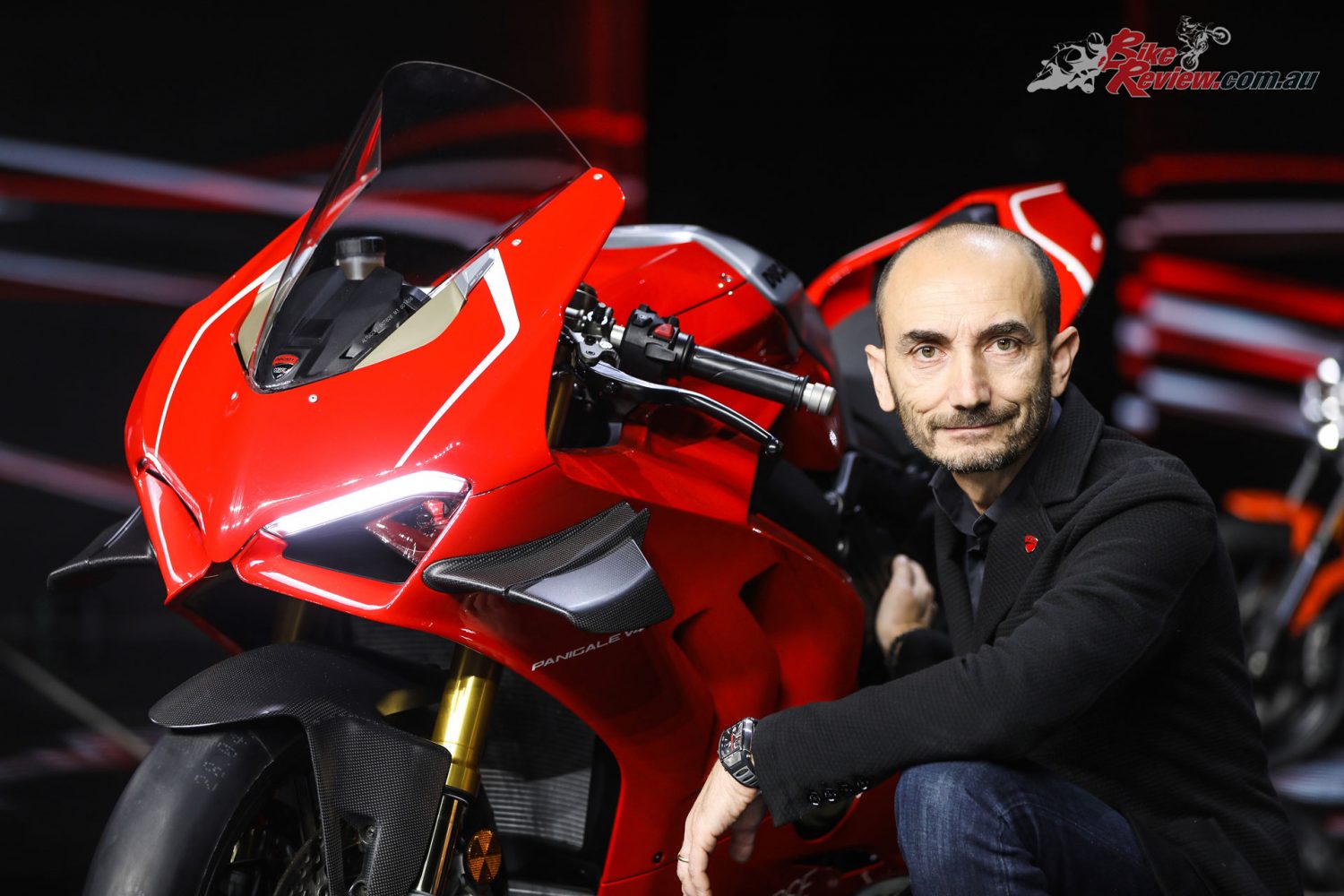 Ducati headline their Ducati World Première 2019 with their all new Panigale V4 R WorldSBK machinery ahead of EICMA, alongside the new Hypermotard 950, Diavel 1260 & Multistrada 950 S

The Ducati World Première 2019 was the final act of the Global Dealer Conference,held at Milan’s Linear Ciak theatre, a few days prior to EICMA launching. Claudio Domenicali, CEO of Ducati Motor Holding, unveiled the new 2019 range personally, while reflecting on the 2018 year. 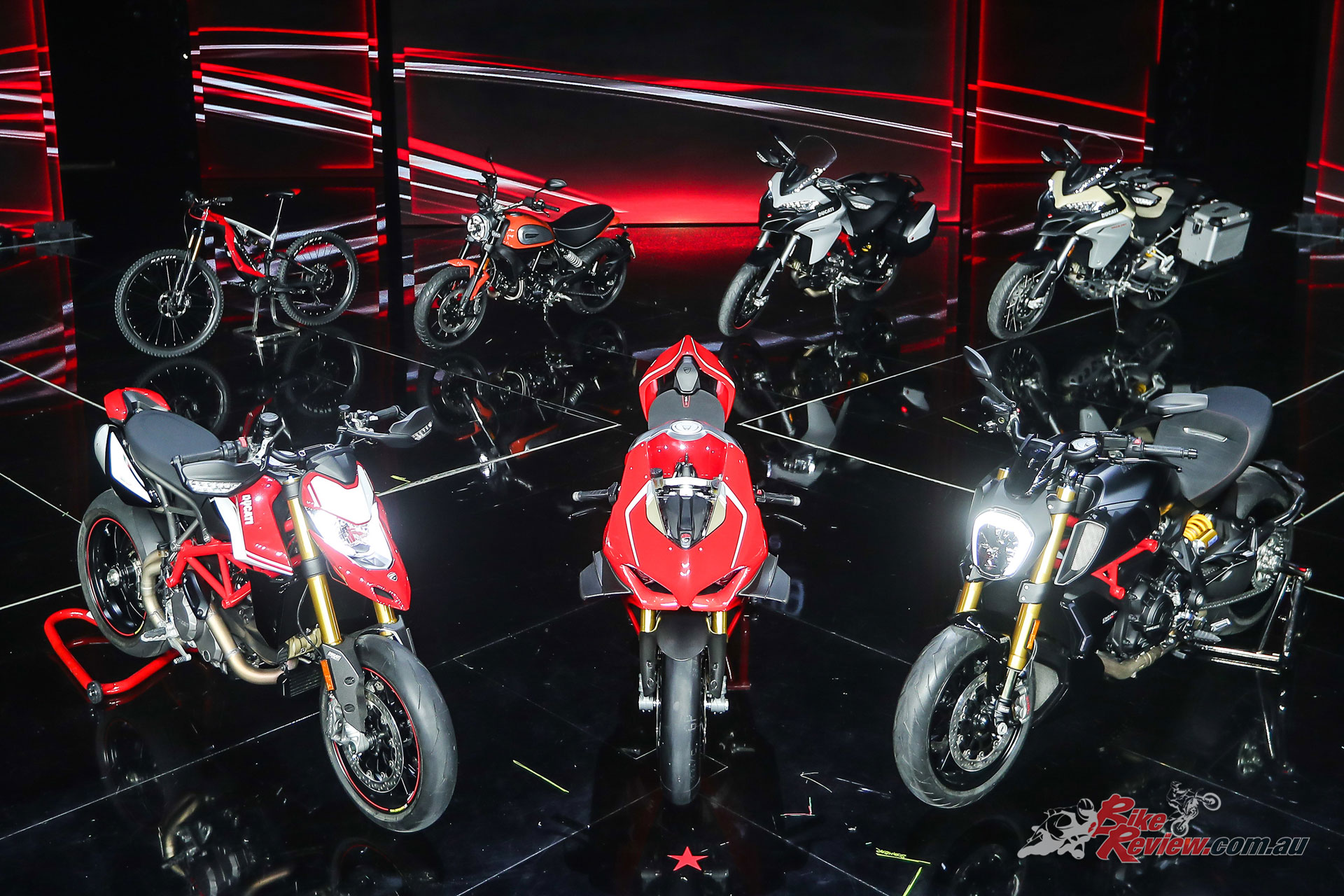 “Ducati has achieved a striking degree of maturity”, stated Claudio Domenicali. “It is a global flag bearer of some of the best aspects of Made in Italy excellence. Based on core values of Style, Sophistication and Performance, our company now offers a range as broad as it is state-of-the-art. This year sees the first major overhaul of the entire Scrambler range since its inception, plus a complete renewal of the Diavel and Hypermotard, two bikes that are firm favourites with Ducatisti. Today, safety and rider-friendliness have hit new heights, yet the brand’s sporting soul is as evident as it has ever been. The Panigale V4 R, in fact, is the most powerful factory motorcycle ever built by Ducati. We’re also delighted with our on-line presence, an area that has enjoyed excellent growth, thus confirming the extraordinary appeal of the entire Ducati product range.” 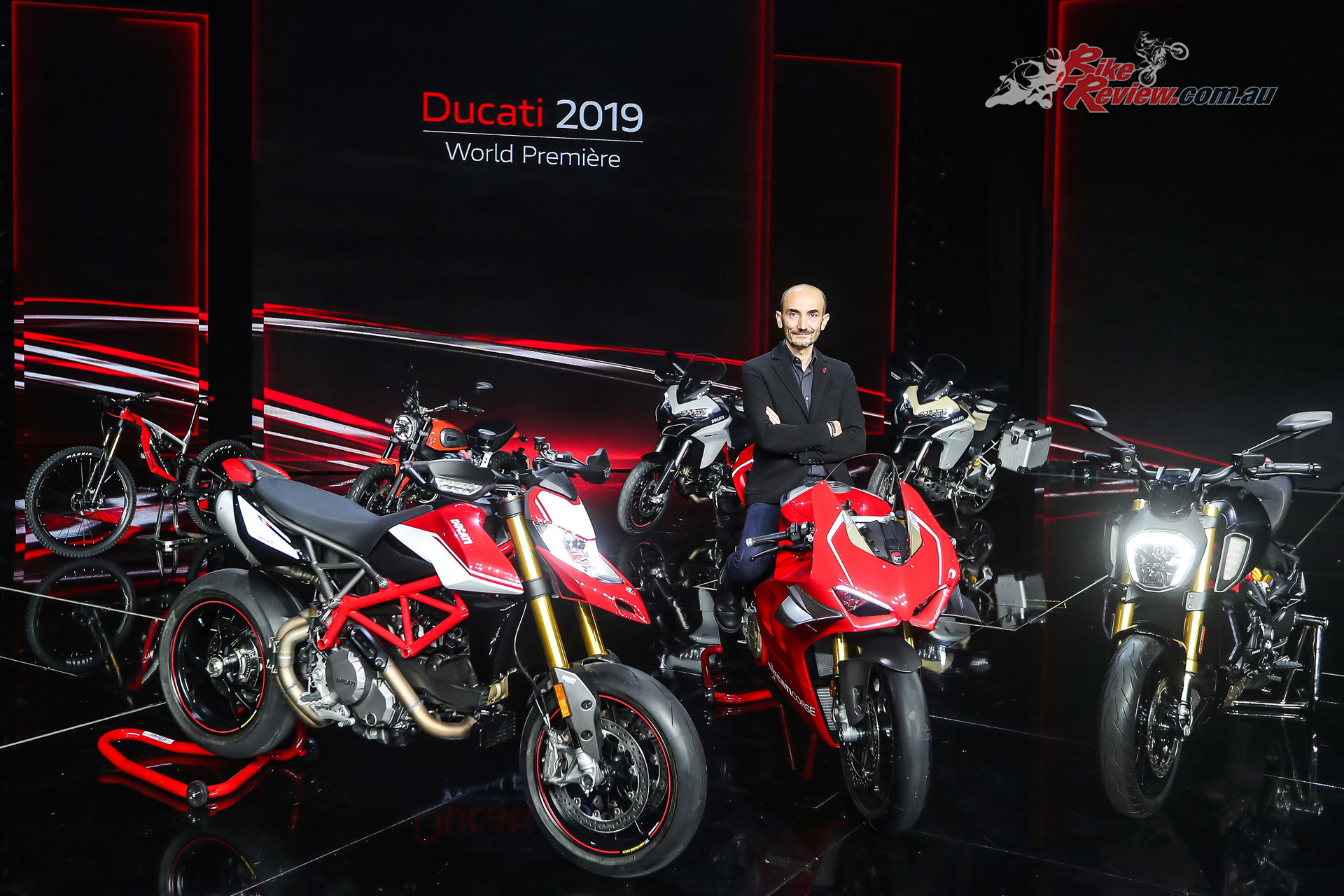 To get the show under way, bikes already presented ahead of the Milan fair were illustrated – the new Ducati Scrambler range, with 4 new motorcycles from the Icon to the more distinctive Cafè Racer, Full Throttle and Desert Sled, and the Multistrada 1260 Enduro. 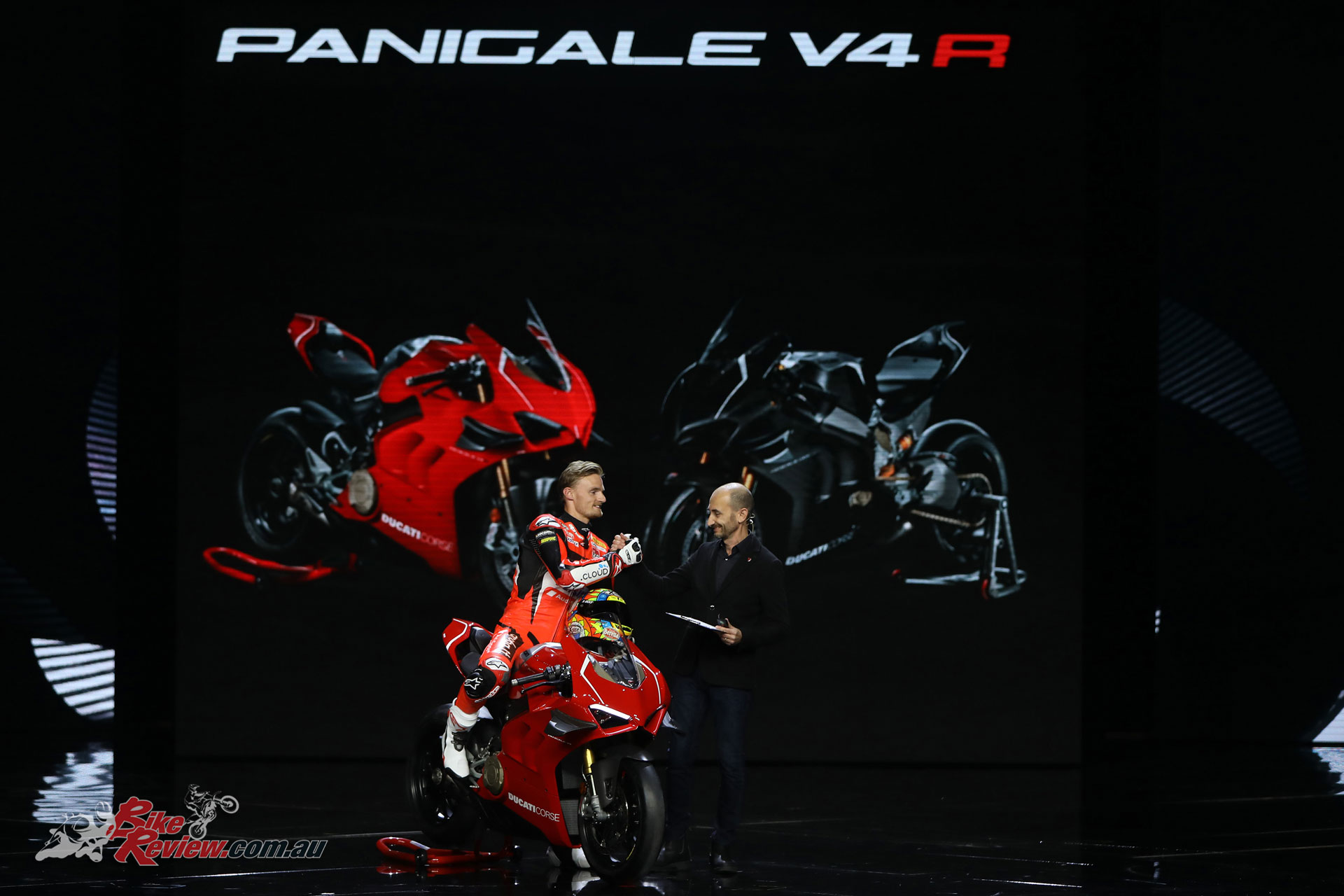 Ahead of the unveiling of the all-new motorcycles, the Première also saw presentations of new versions that will join the 2019 range. These include the Monster 25th Anniversary, first seen at WDW2018, and the new Monster 821 stealth that features matt black livery and red graphics, quick shift system, adjustable fork and nose fairing. 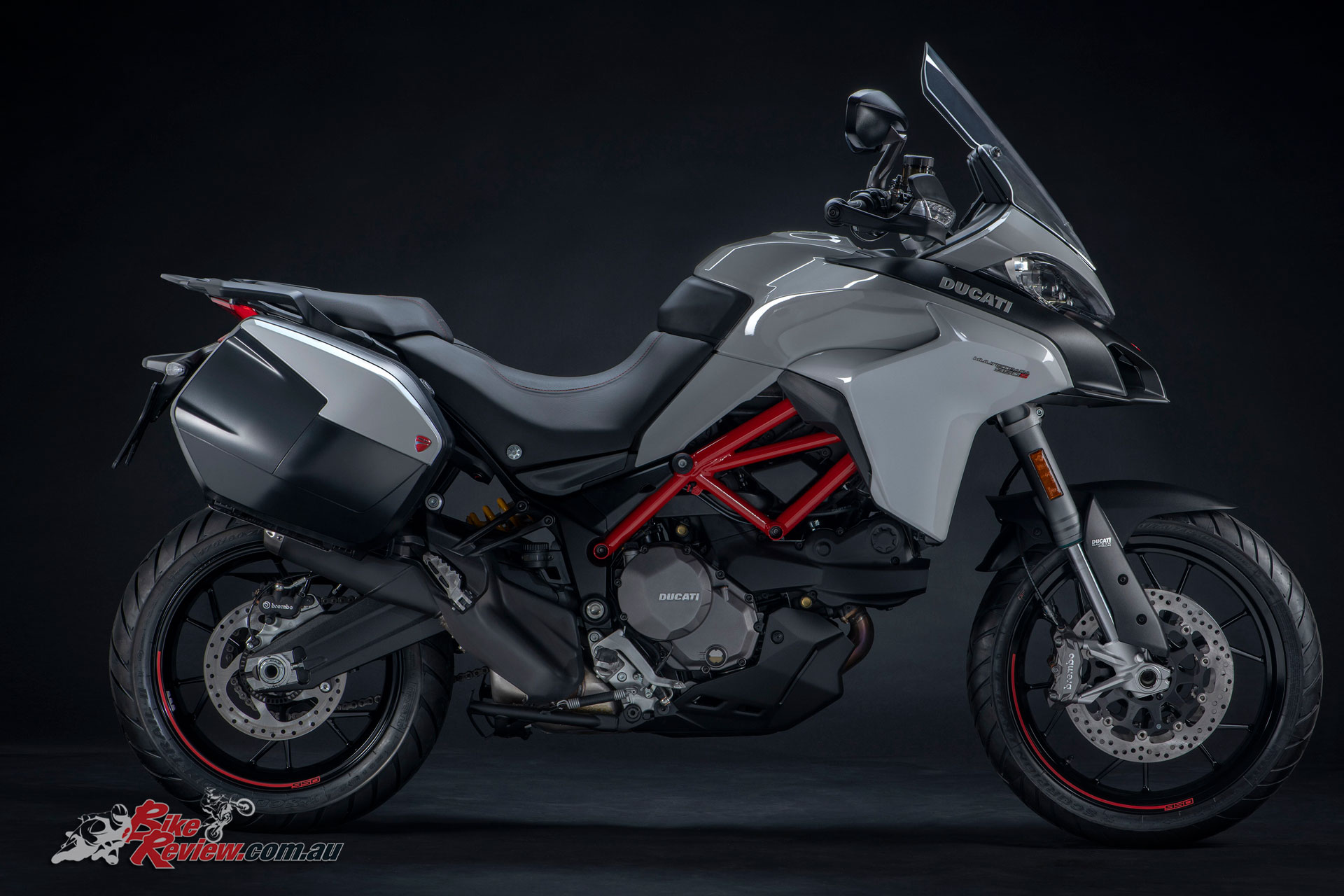 From a styling viewpoint, the new Multistrada 950 inherits the side ‘wings’ from its bigger 1260 counterpart, making the front even cleaner and more streamlined. It also features hydraulic control and, above all, Bosch ABS Cornering, which increases active safety. 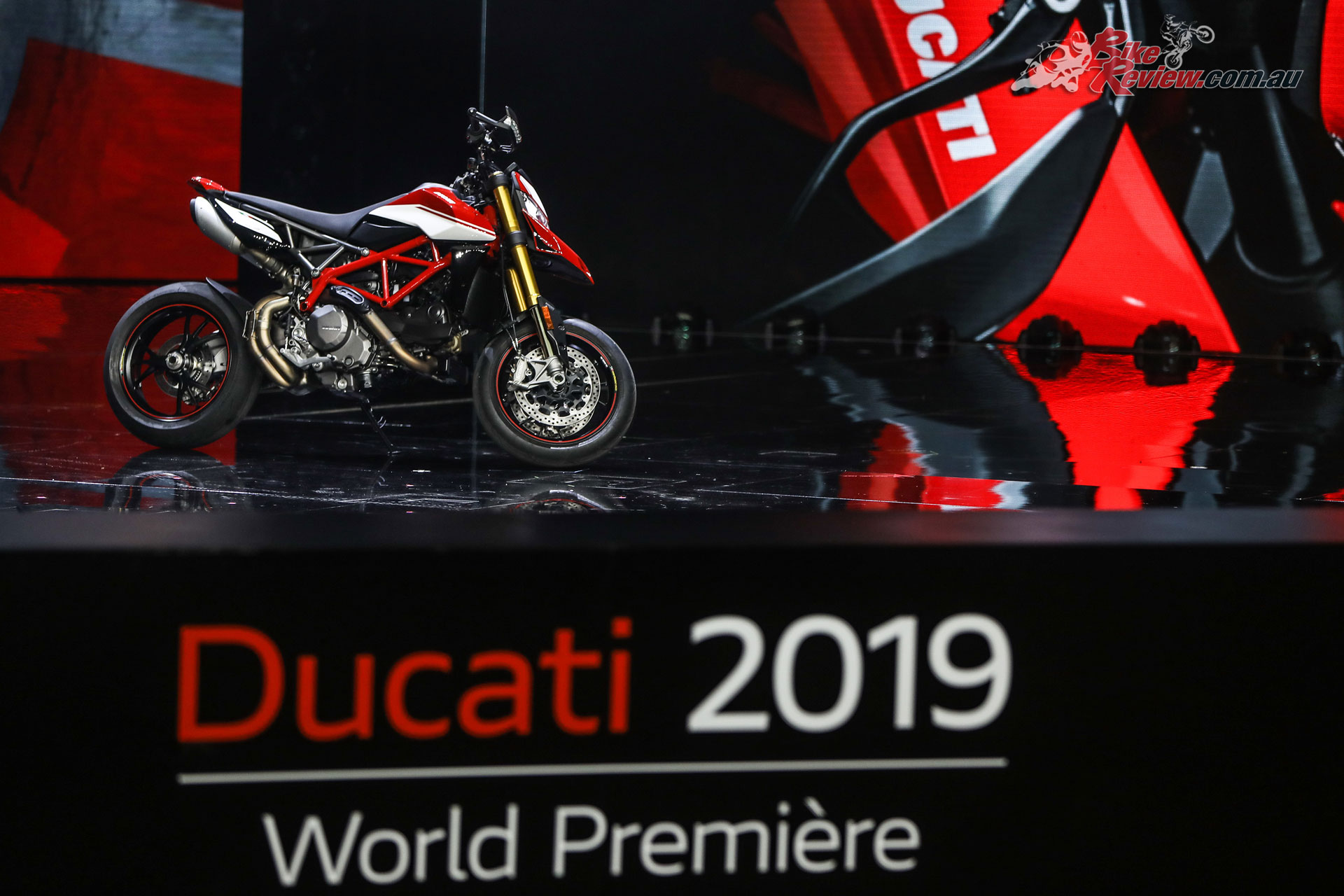 The first of the all-new motorcycles in the Ducati 2019 range is the Hypermotard 950, having received a full-blown makeover, with the new look taking its cue from the supermotard race world, the completely overhauled ergonomics aim to ramp up the fun, alongside an advanced chassis set-up and electronics package. 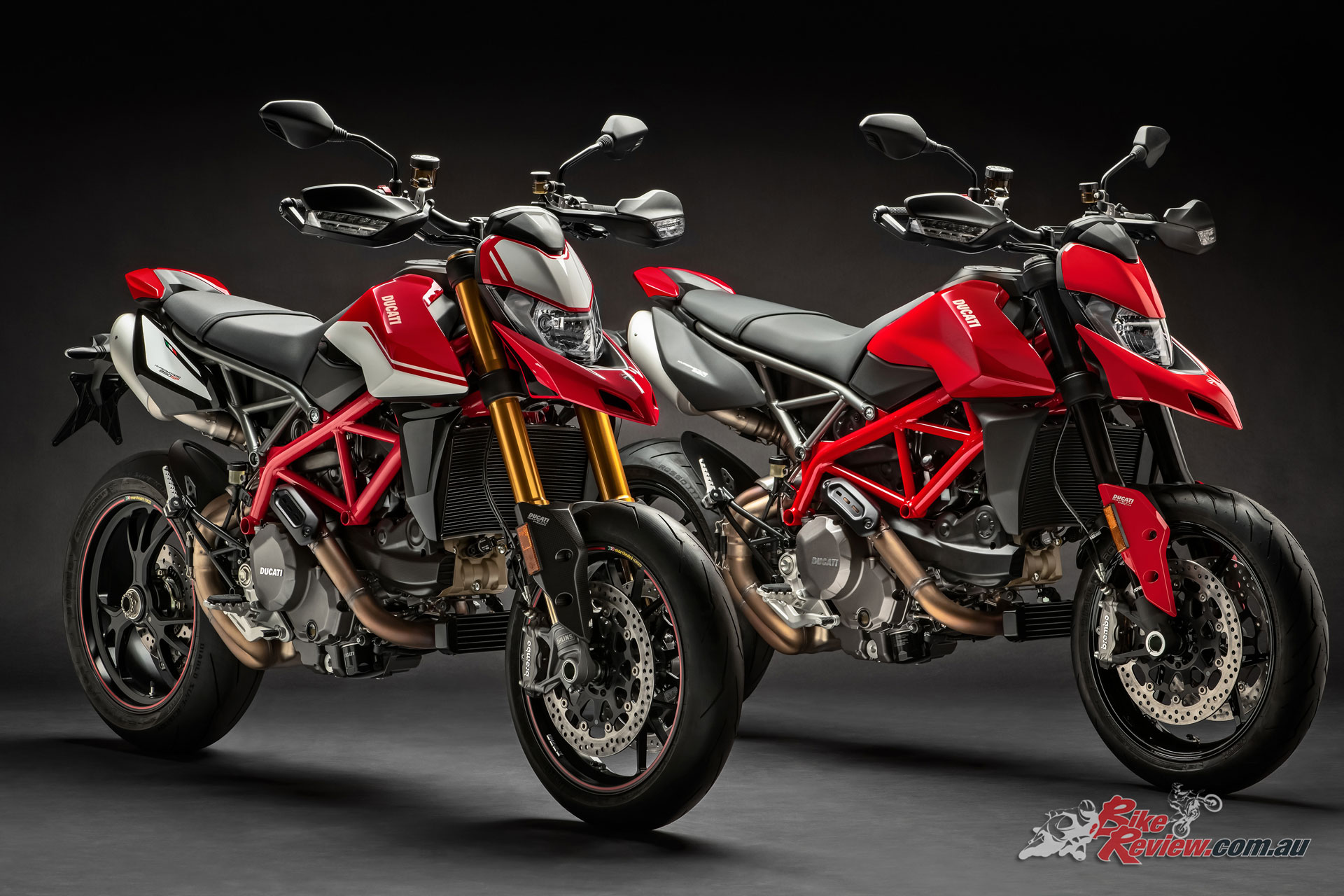 The Hypermotard 950 electronics package includes Bosch Cornering ABS with the Slide by Brake function, Ducati Traction Control EVO (DTC EVO), Ducati Wheelie Control (DWC) EVO and Ducati Quick Shift (DQS) Up and Down EVO (as standard on the 950 SP version and available as an accessory on the 950). 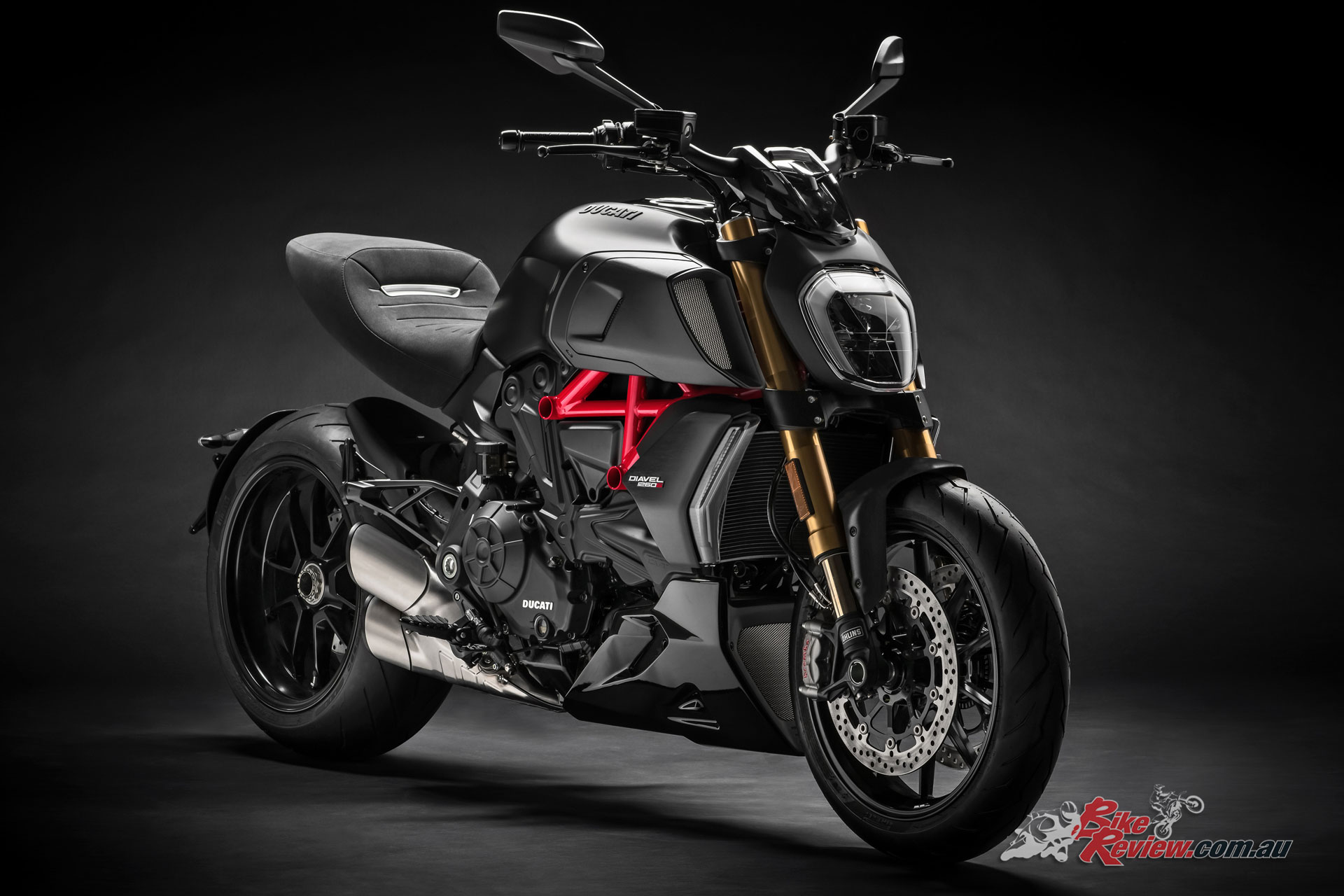 Another major development is the new Diavel 1260, which as soon as it was launched at EICMA 2010 stunned with its personality, design, sport naked handling and performance.

The second-generation Diavel 1260 remains faithful to the original spirit of the bike, drawing on its key styling elements and putting a decidedly more contemporary slant on them: it now offers higher performance, is more fun on mixed-road routes and offers greater comfort for rider and passenger alike.

Its sport naked soul is evident in the Testastretta DVT 1262 engine, capable of delivering 159 hp (117 kW) at 9500rpm and 129Nm at 7500 rpm.The torque curve ensures the duality of breath-taking acceleration and a low-rev smoothness that’s ideal for everyday riding or touring. 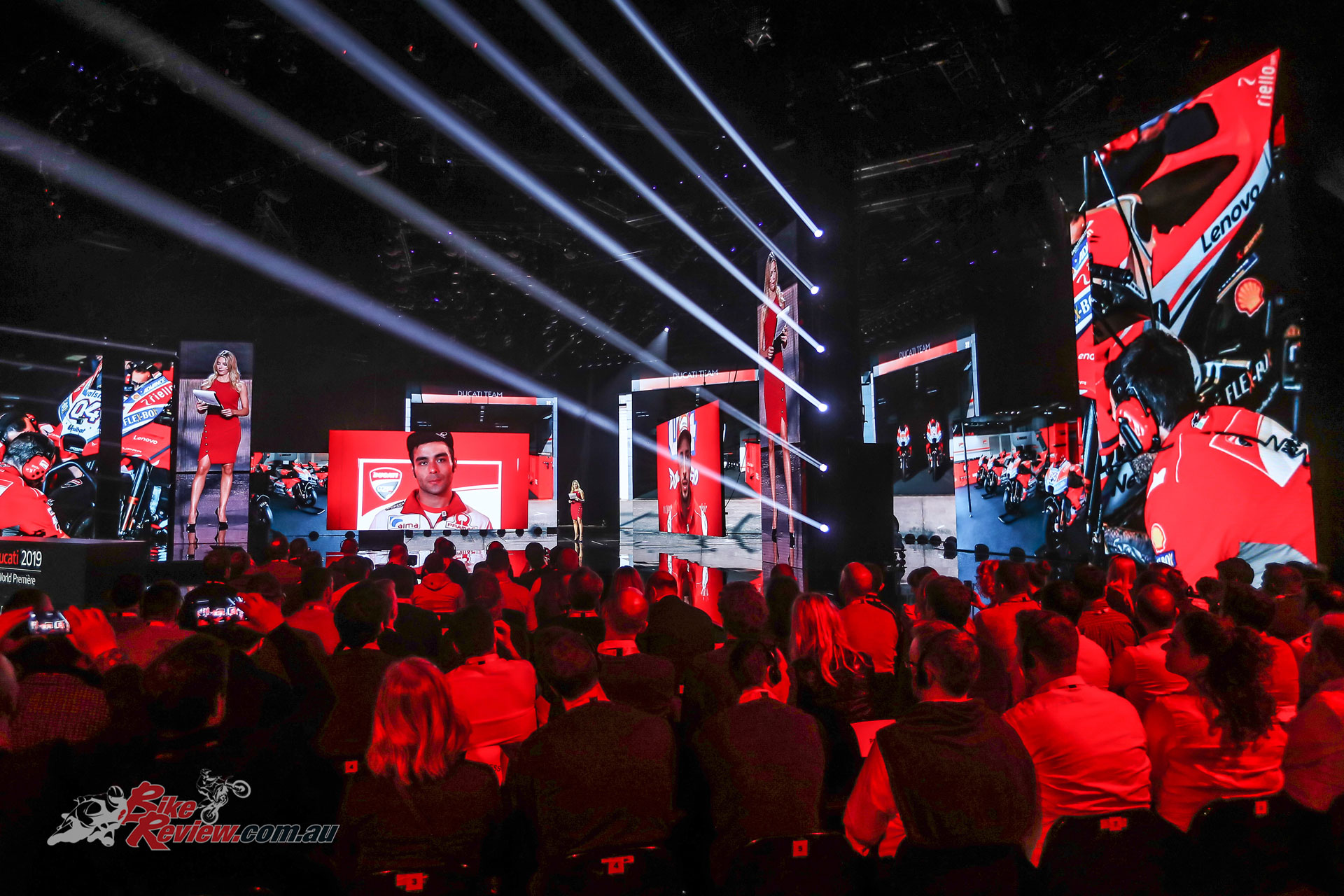 An upgraded chassis set-up makes the Diavel 1260 more responsive on mixed-road routes while top-drawer technology and electronics provide braking performance on a par with that of a sport bike (and does so safely, thanks to Bosch Cornering ABS) and user-friendly engine performance control.

The riding position and ‘power cruiser’ ergonomics that helped make this motorcycle so successful remain unaltered: what has changed is the chassis set-up, characterised by a new tubular steel Trellis frame and the 17″ inch rear wheel with its 240 mm wide tyre.

A sportier S version of the Diavel 1260 is also available: features include fully adjustable Öhlins suspension at both front and rear, dedicated wheels and an even higher-performance braking system. Moreover, the S version mounts Ducati Quick Shift up & down Evo (DQS) as standard to allow clutchless shifting. 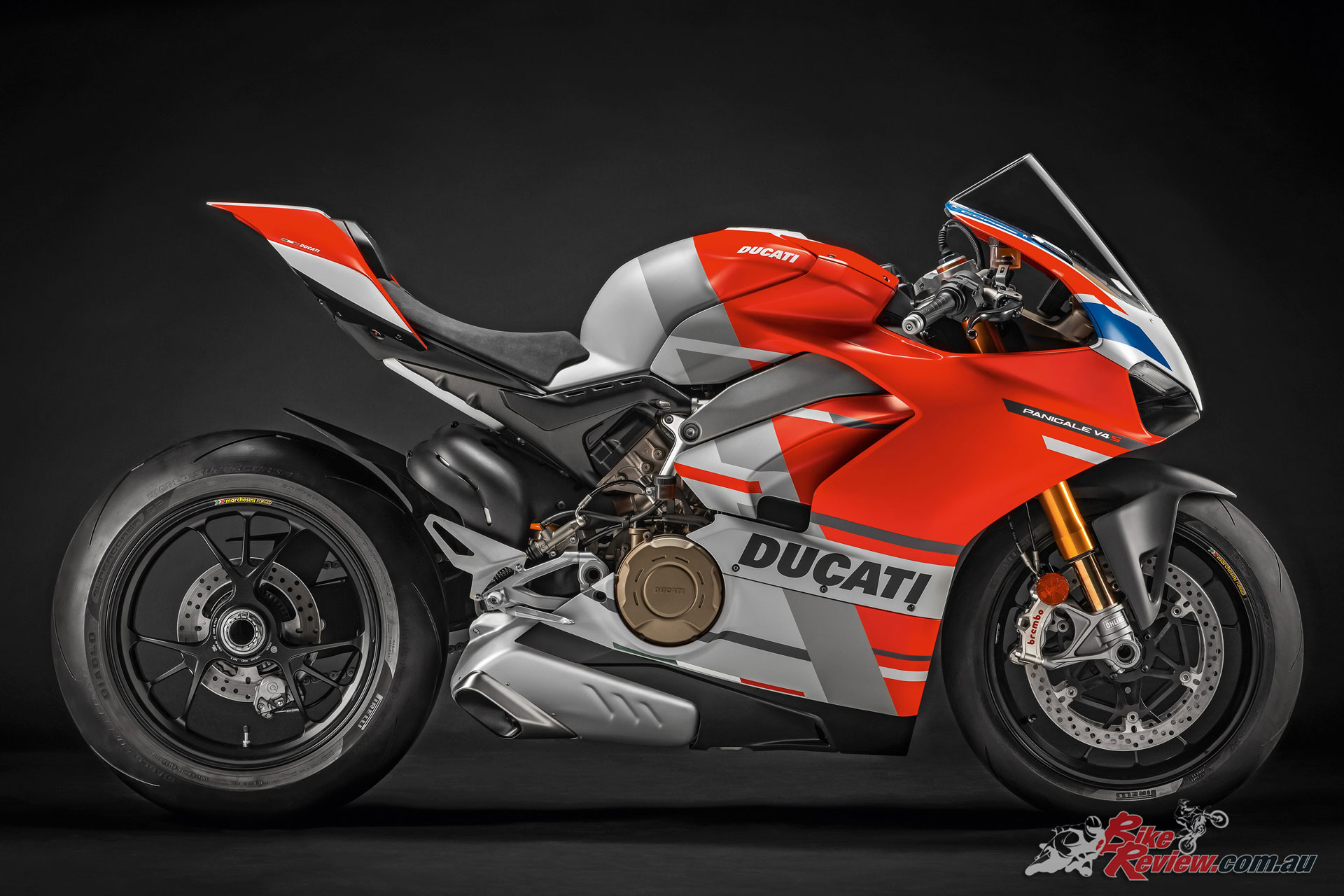 A new livery on the Panigale V4 S Corse was also unveiled, and has been created using official Ducati MotoGP team colours, mirroring the special version with the same colour scheme that Michele Pirro rode to victory in the Race of Champions at WDW2018. 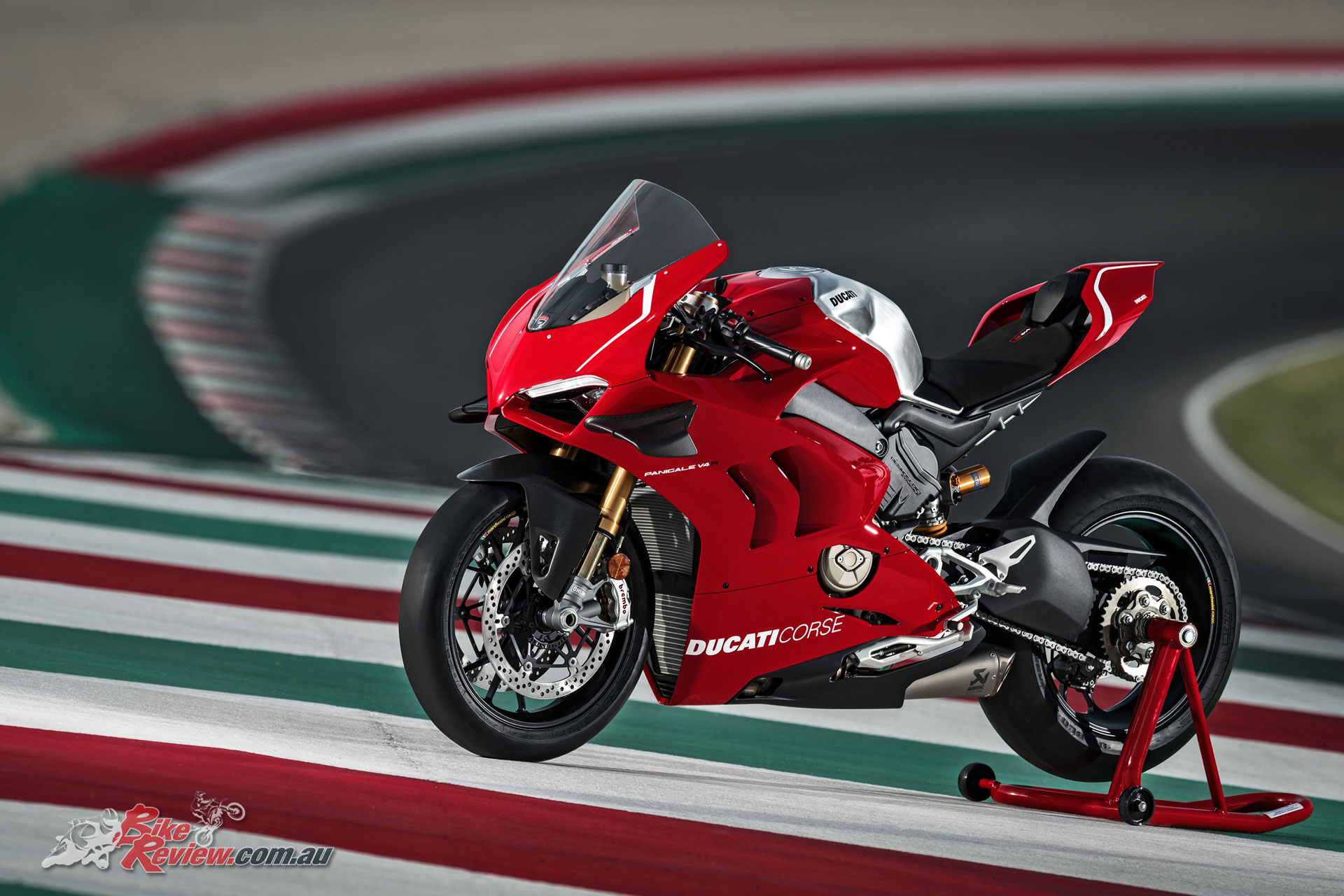 The undisputed star of the Ducati World Première 2019 – and aspiring candidate for the title of ‘best-looking bike of EICMA 2018’ – was the Panigale V4 R.Compared to previous R versions, the Panigale V4 R is now even more specialised and features technology taken directly from MotoGP.

The modifications extend beyond the engine and suspension set-up: they also include the fairing, designed and developed by Ducati Corse in close collaboration with the Ducati Style Centre to improve aerodynamic efficiency. The new fairing also incorporates the aerofoil appendages developed for the MotoGP prototypes and are made of carbon fibre. 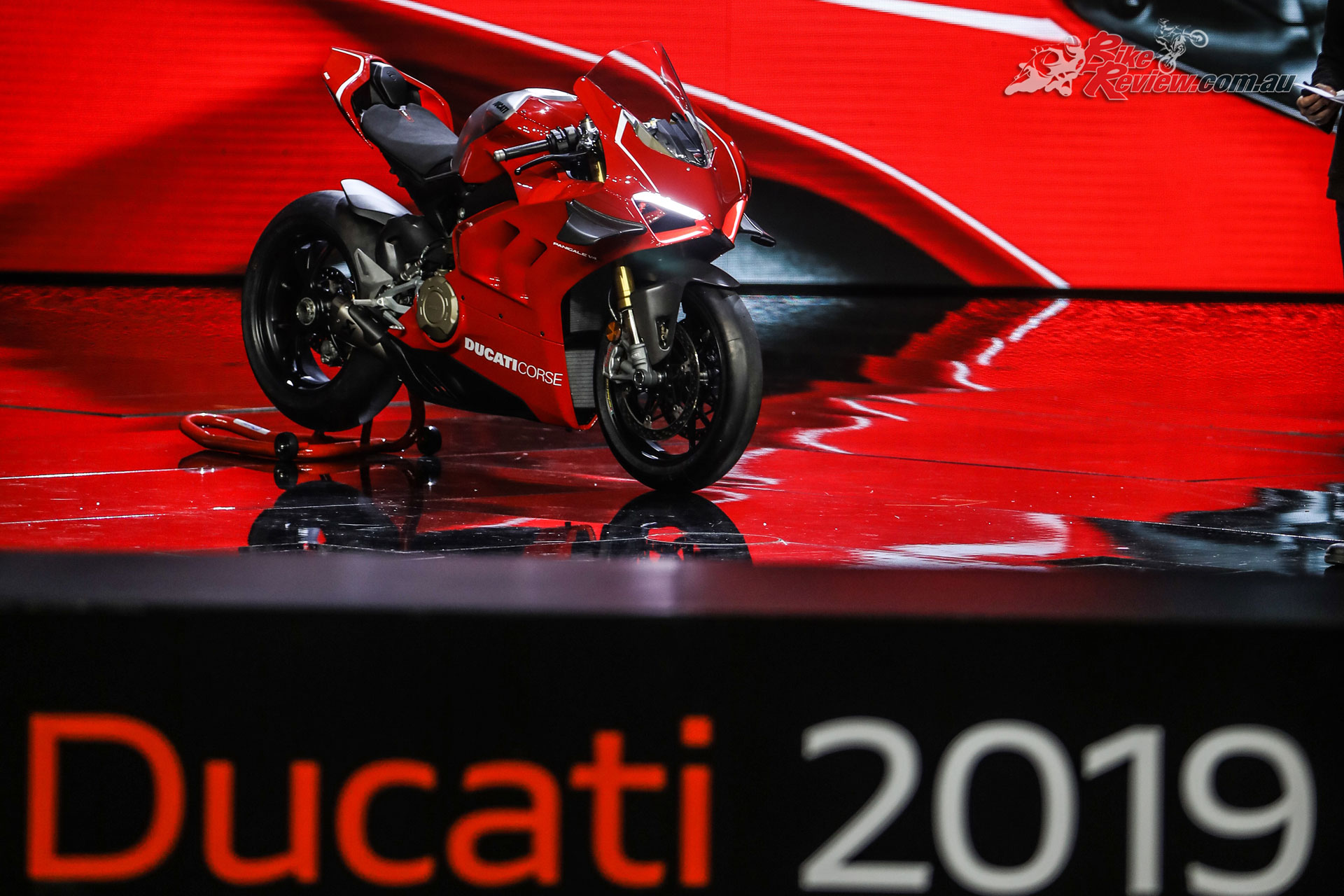 The Panigale V4 R is, to all intents and purposes, a road-legal WSBK category competition bike and constitutes the technical foundation for the official Ducati Superbikes that will compete in the World Championship from the 2019 season. 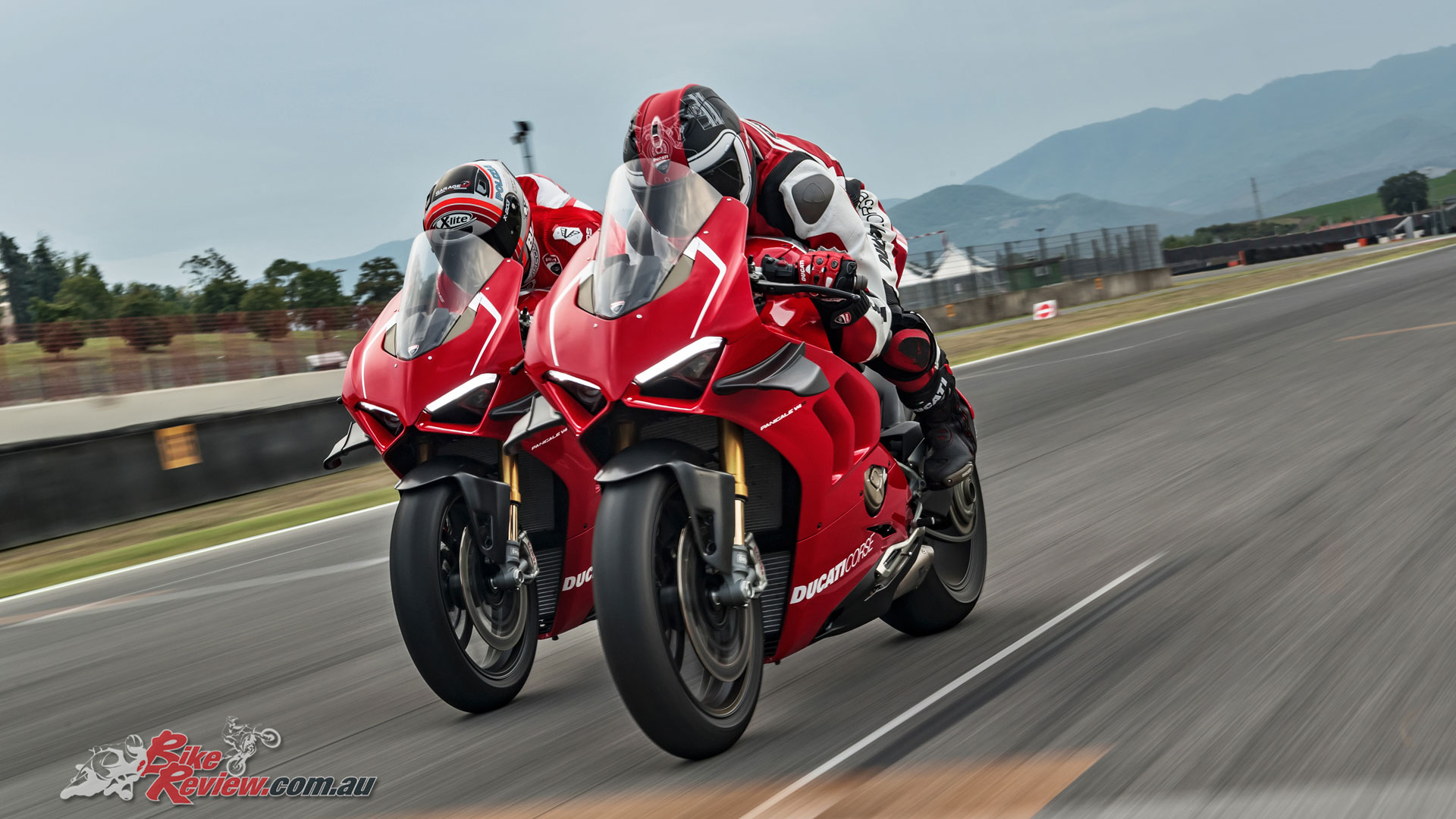 The end result is 221hp (162kW) of power at 15,250rpm, 2250rpm higher than the point of peak power on the 1103cc V4. These impressive figures can be taken even higher by fitting the full-racing Ducati Performance exhaust by Akrapovič, which boosts maximum power to 234hp (172kW) at 15,500rpm. In short: the most powerful Ducati factory motorcycle ever!

Solid and successful – with dream bikes of unparalleled design and eye-catching accessories and apparel that faithfully reflect their style and originality – Ducati looks forward to welcoming the public to the 76th edition of EICMA (Hall 15 Stand N06) and continuing the pivotal role this iconic brand plays in the international motorcycle industry.

Stay tuned for a run down on each of the new and significantly updated models. 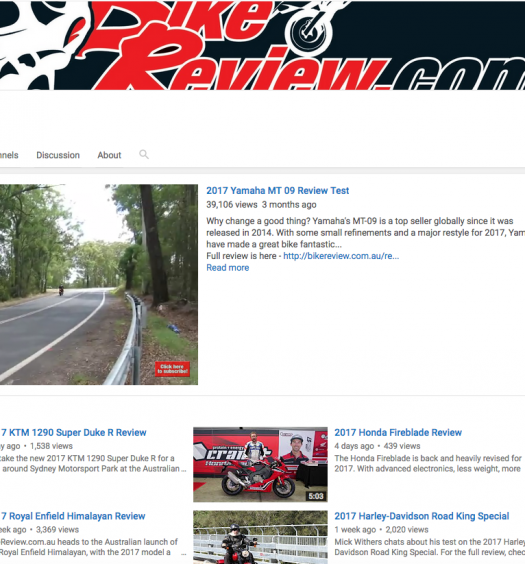 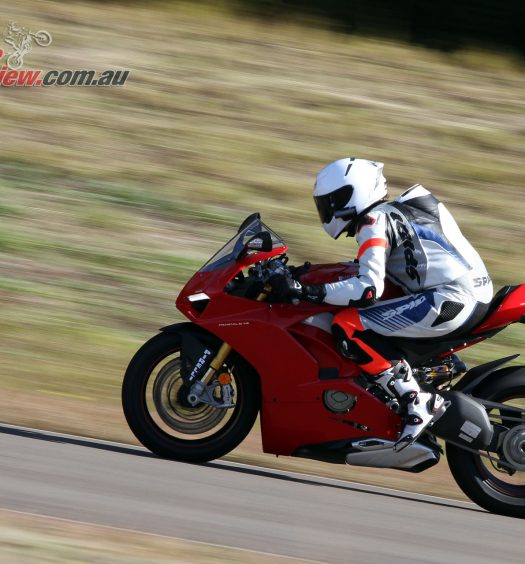