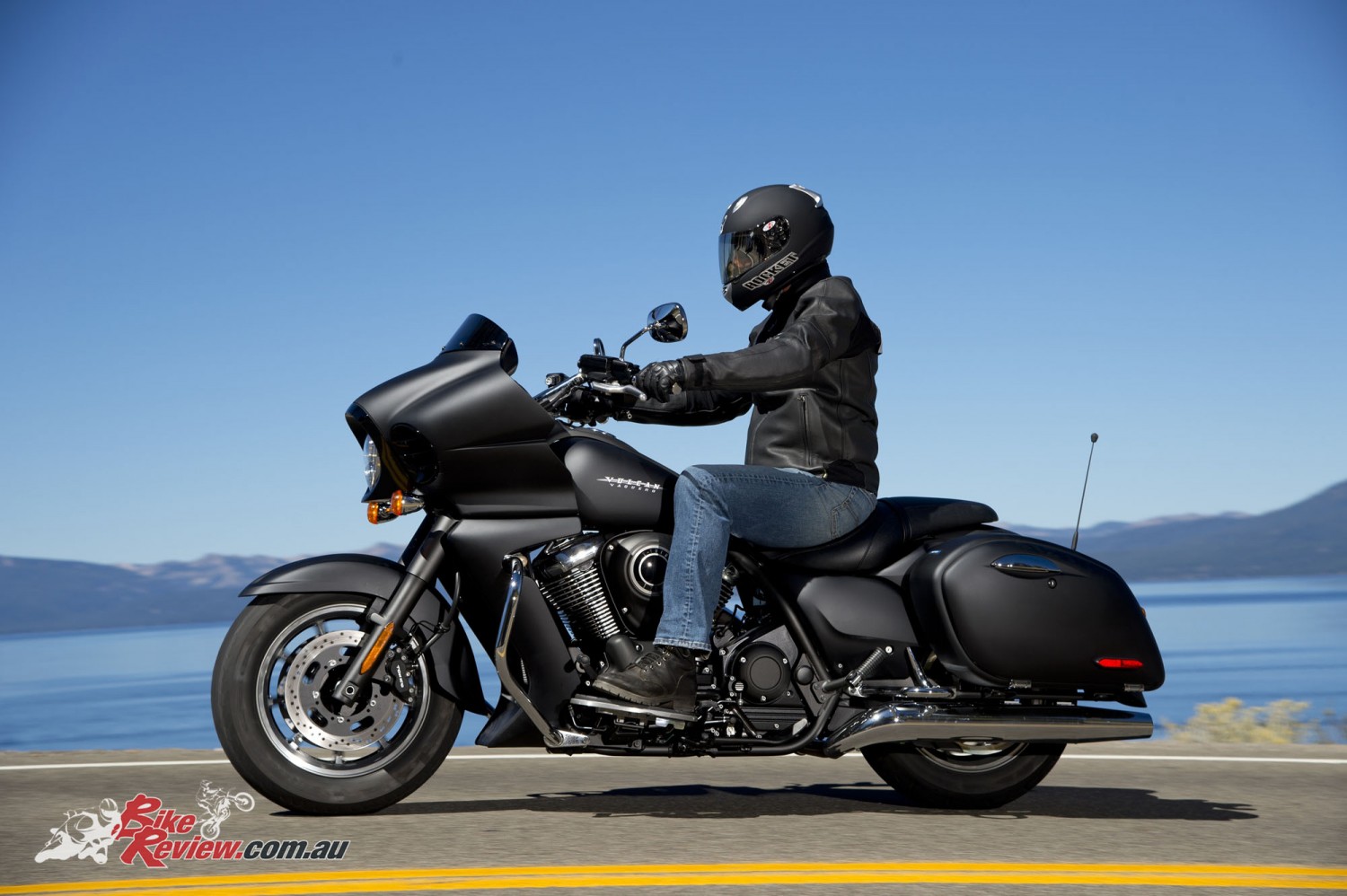 The Kawasaki Vulcan 1700 Vaquero offers plenty of technology for those after a sporty modern cruiser. Here's our Vulcan 1700 Vacquero review. Test by Mick Withers, Photography by Kawasaki

The first word to come to mind was unusual, strange and I don’t know where the hell it came from. Nimble. Bit of a funny word but as I headed north through peak hour traffic to Pie in the Sky, that one word kept rolling and tumbling through my headspace. Nimble is a word that sounds more suitable for just about anything other than a half tonne of man and bagger.

That trip north was my first taste of Kawasaki’s entrée into the world of baggers. It arrived the previous day, delivered by a pair of men wearing green who were obviously rather taken by the new model. Can’t blame them for that. There is lots to like. 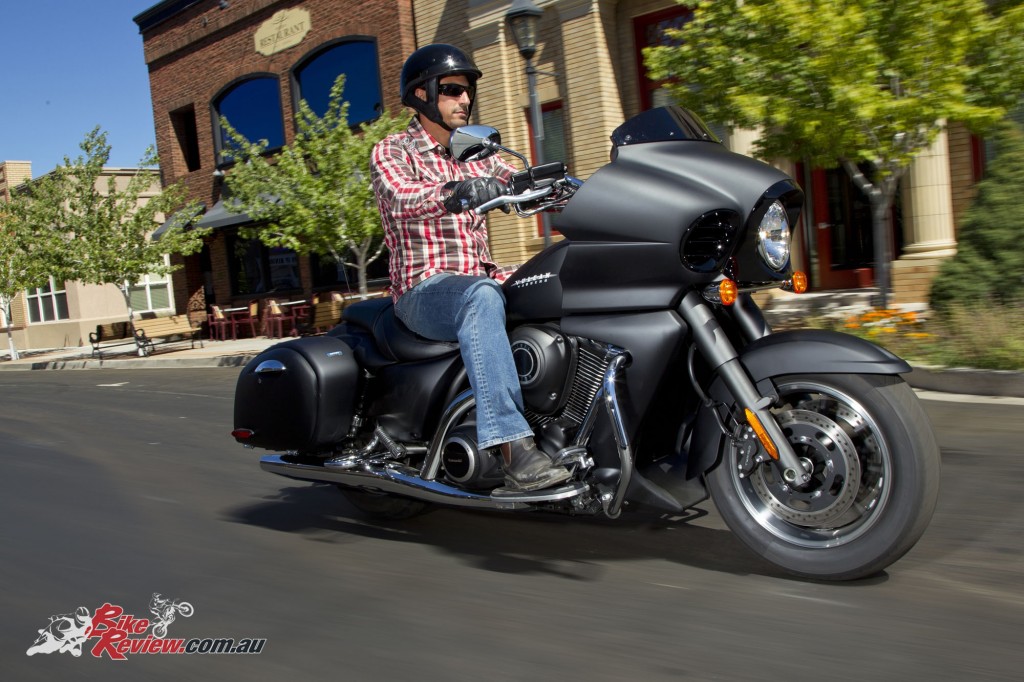 After they left, I rode it a short distance down my street before pulling a feet-up U-turn and riding it up the driveway. The U-turn is something I do with every new test bike. It’s a quick way of feeling the clutch, torque, rear brake and balance. Not every bike passes this little manoeuver but the Vaquero flew through it with ease.

As it was still the middle of the day, I braced myself with coffee and did the poke and prod thing while circling the Vaquero. Having only seen pics, I was happy to see that the bodywork flows very nicely from one end to the other. Not one piece failed to match with the next. The pics I had seen were of a Vaquero fitted with a chrome headlight surround. The black surround fitted to the Australian-delivered model looks much better.

Visually, the Vaquero is a departure from traditional Kawasaki styling even though there are a few hints at other models. From the side, the front fairing and bodywork is very minimal but if you walk to the front, it’s a vastly different story! Yeah, it’s wide at handlebar height but slimmer further down towards the ground. The side-opening hard bags each offer 35 litres of storage space and add to the rear width and are actually the widest part at 970mm but I doubt that anyone is going to be trying to squeeze through too many gaps in peak hour traffic aboard a Vaquero. It’s not that sort of bike. 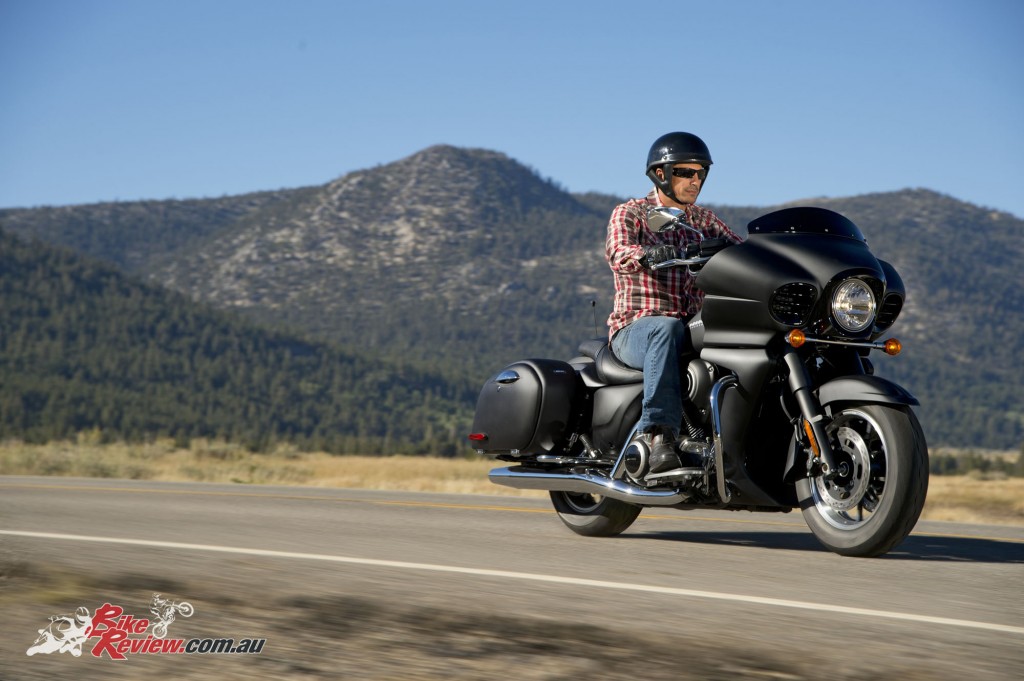 Sitting on the Vaquero was comfortable for my 183cm frame. The floorboards offer a wide variety of spots for your feet and the reach to the bars was no stretch at all. In fact, the bars seemed very close but adjusting the mirrors so that they sat further forward made a difference. Little touches can make a big difference. The short wind deflector atop the fairing looks cool and actually works well at deflecting airflow at helmet height. Sadly I didn’t get to try it with an open face helmet but my Kabuto was copping a bit of buffeting.

The dashboard is certainly that: A complete board full of things. From the left there’s a fuel gauge, then a speedo screen full of things to tinker with, tacho and temp gauge. Below that is the entertainment precinct with 40 watts of power driving the speakers in the outer edges of the fairing. As we didn’t have the iPod-connector or charger, my music-laden iPhone stayed in my jacket pocket rather than the left side glovebox. With those two bits, you can connect your own music source for when the stock report from the local radio station gets a bit too much.

With a full face helmet, I could still hear the stereo at legal highway speeds. The controls were all on the lower front of the left switchblock and making changes was soon second nature. The screen in the centre of the dash offer an odometer and two tripmeters that I never worked out how to reset. I should have asked for the owners’ handbook, but I forgot.

The screen also shows gear position down the left and range left in tank or average consumption in the units of your choice. All of the normal lights are arrayed across the top with ABS and cruise control indicators across the bottom with an oil light. 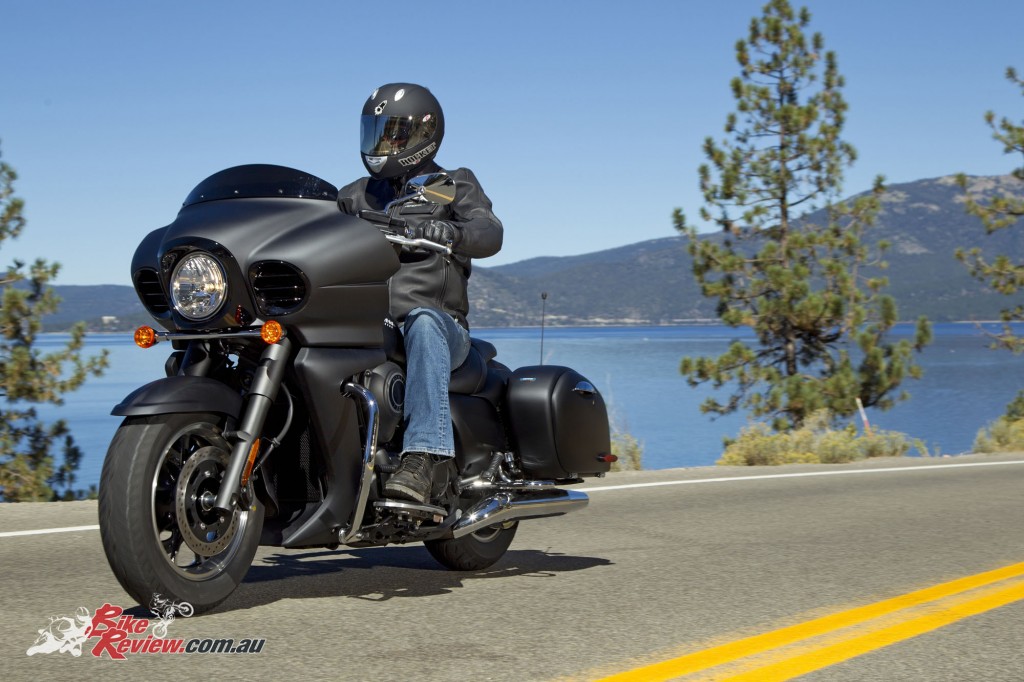 Normally night time riding is an important part of our testing but this time it was restricted to just a single half-hour that presented no frights around suburbia. The red glow from the gauges on the dash was neat. One word of caution about the speedo. The needle is quite fat in relation to the marked increments on the speedo’s face and you could easily be doing 105 or 115km/h. On a trip down the Hume from Sydney to Melbourne, I kept the needle between the 1 and the 2 of 120. A cop pointed a radar at me and didn’t even flinch.

The trip to Melbourne came up unexpectedly and I had to be down and back in just three days. Southbound was knocked over from the Caltex on Mamre Road to Craigieburn in exactly 8.5 hours. Stops at Yass, Wodonga and Euroa for fuel for the bike and water for me was it. According to my notes, the Vaquero managed 17.48km/l southbound but northbound via much more interesting roads, it dropped to 16.10km/l. Average theoretical fuel range is 331.4km from the 20L tank. If you’re brave.

Overtaking was a thing of joy on the expressway. Line ’em up and out and around with minimal time out of your lane. I know it was a freeway but you get the idea. Kawasaki engineers put effort into engine tuning and overtaking between 80 and 113km/h (provided you’re in third gear or above) was made easy by the extra urge they programmed in.

The long stroke, liquid-cooled 1700cc engine was based on the Vulcan 1700 series but uses a SOHC rather than pushrods for greater efficiency.  Either side of the engine are large airboxes to feed the twin-throat ETV (Electronic Throttle Valve) System. Two throttle cables transmit motion to an Accelerator Position Sensor that feeds data to the ECU and then an electronic motor provides rotary motion to control the opening and closing of the two 42mm butterflies. It’s not fly-by-wire and definitely feels just like any twin-cable throttle assembly. 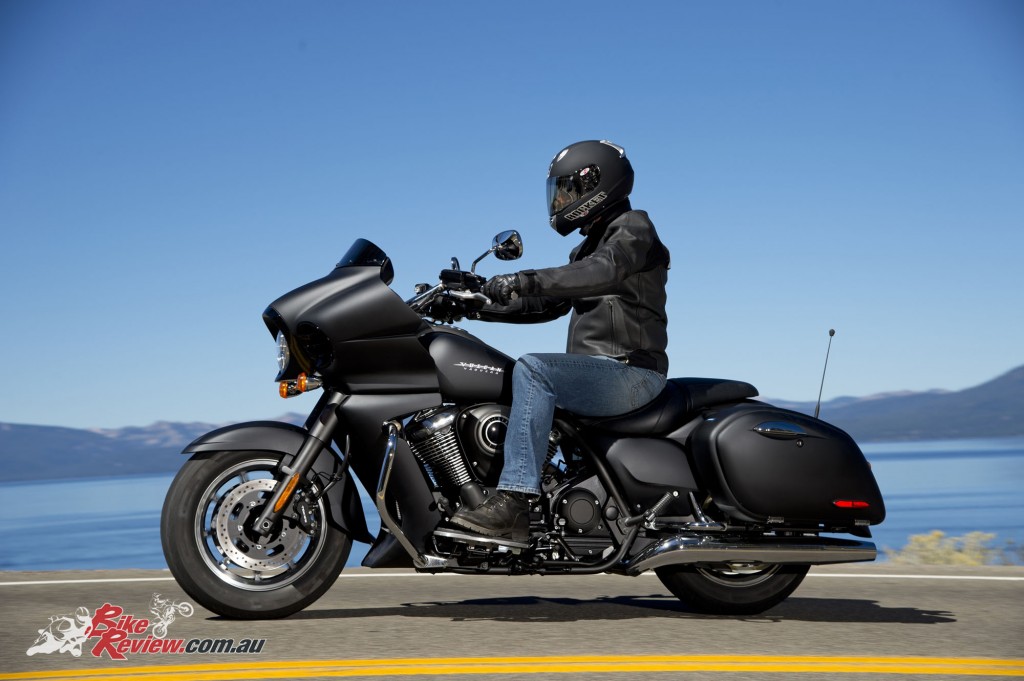 The bottom-end of the Vaquero’s engine is a semi-dry sump that allowed the crankshaft to be mounted lower enabling the longer stroke without increasing engine height. A single crankpin carries both conrods and primary balance is capably handled by a pair of counter-balance shafts. Belt final drive is both quiet and efficient with much lower maintenance than a chain.

Using carbon-fibre instead of Kevlar as a tensile material, the 26mm-wide belt offers high strength (tensile strength is 40 per cent greater with a Kevlar belt of the same size) with a slim size and light weight. Backing the engine is a hydraulically-activated wet multi-plate clutch and six-speed transmission with the top two gears being overdrives. The driveline worked well and I don’t have a single outstanding memory of it. Normally something stands out but in the case of the Vaquero, everything worked without requiring undue attention.

One of the things that I have noticed over the years of riding bikes with floorboards is the wide variance in the efficiency of the gear lever and brake pedal.  The men from Kobe got it right on the Vaquero. My size 12 feet fitted the heel/toe shifter perfectly and the brake pedal could be used without having to lift the whole foot off the floorboard. Being able to operate the foot brake accurately is a good thing as it also operates one front caliper and rotor.

When I was taking delivery of the Vaquero, Murray Sayle pointed out that the brake pedal is linked and said words to the effect that in an emergency braking situation, stomping on the foot pedal would bring the whole bike to a quick and efficient stop. 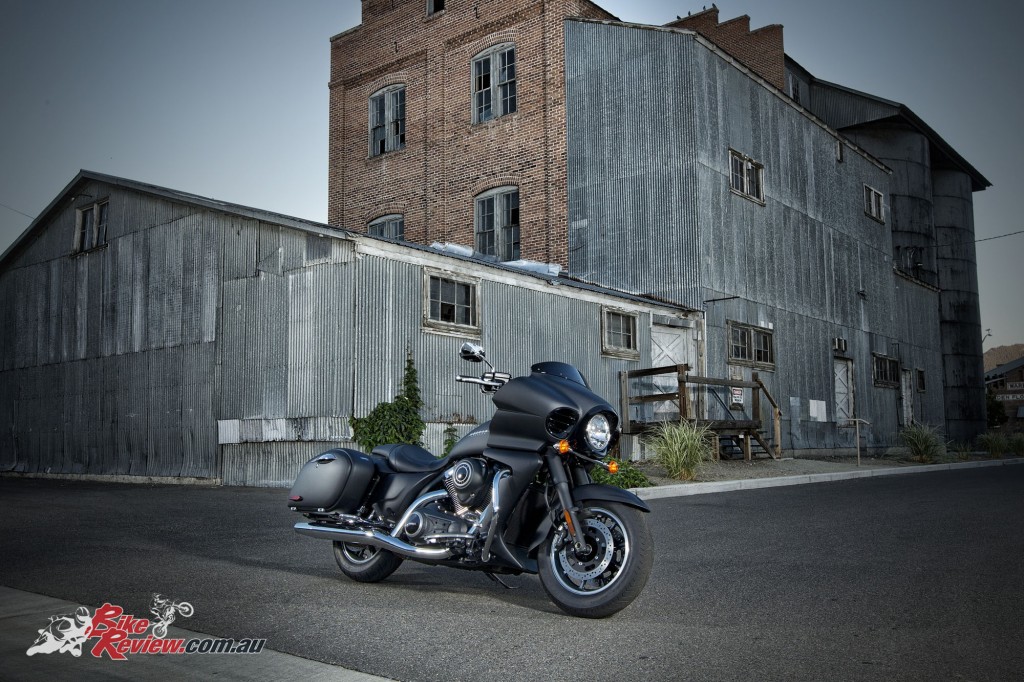 In a quiet place far from prying eyes, I tried stopping from highway speed by stomping on the pedal and the ABS and K-ACT (Kawasaki Advanced Co-active-braking Technology) both did their respective things and the Vaquero stopped in a short space with no sign of lockup from either end. Good fun.

By making a conscious effort, I was able to travel most of the way from Mansfield to Whitfield just using the brake pedal. Weird but it worked well.

Now that I’ve mentioned the Mansfield – Whitfield Road, this is a good time to discuss the clearance limitations when cornering on a Vaquero. Apparently it’s a popular road for riders in multi-coloured leathers who enjoy travelling slightly faster than most of us do on cruisers. Granted, my body mass would have been compressing the suspension a tad more than a smaller rider would but within the first couple of slower and tighter corners I had to reduce my speed and lean angles.

There’s nothing wrong with the handling or ground clearance of the Vaquero if it’s ridden within its design criteria but if you forget and try to play boy racer on it, you are going to reduce the sacrificial blocks under the floorboards and then start re-shaping the floorboard’s mounting bracket on the right-hand side. Allegedly. 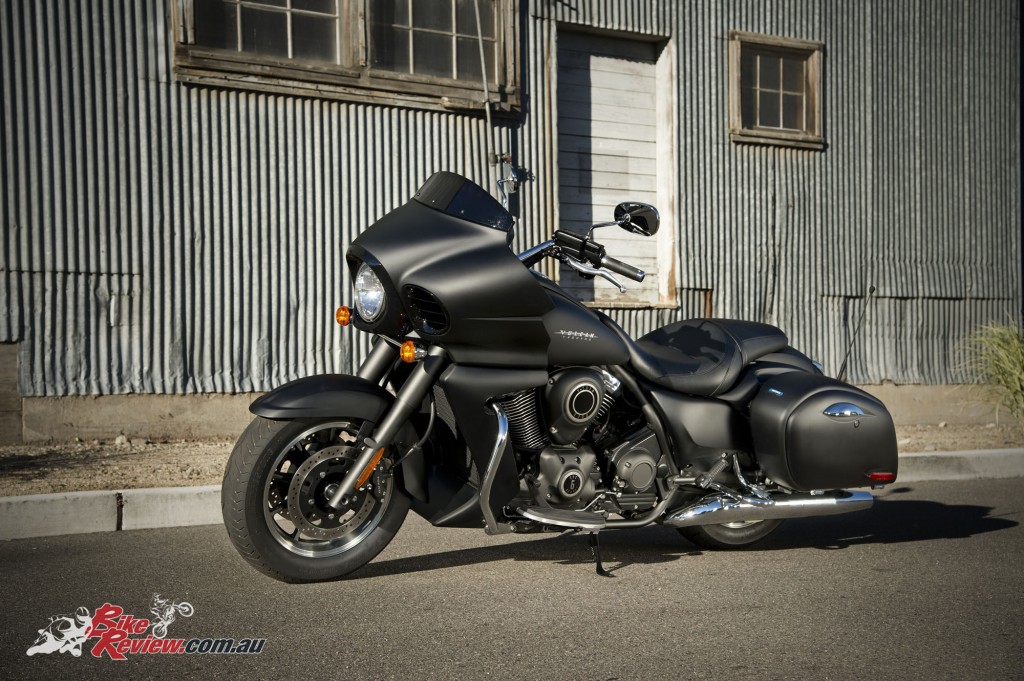 After backing off on the aggression and relaxing, the ride through that part of the Victorian high country was very enjoyable. The light and nimble handling from such a big bike makes it very easy to ride through the fun roads.

Out on the straighter roads it was time to re-activate the cruise control. On the trip south, I’d used it the whole way with the needle pegged in the same spot up and down hill. When cresting hills, you could actually feel the engine braking slowing you down.

The northbound day was more interesting than the southbound day but there you go. If you’ve been thinking about throwing a leg over the Vaquero, go and do it. Try and talk the dealer into letting you take it more than just around the block. To do it justice, highways and roads with bends need to be found during the ride. – Mick Withers 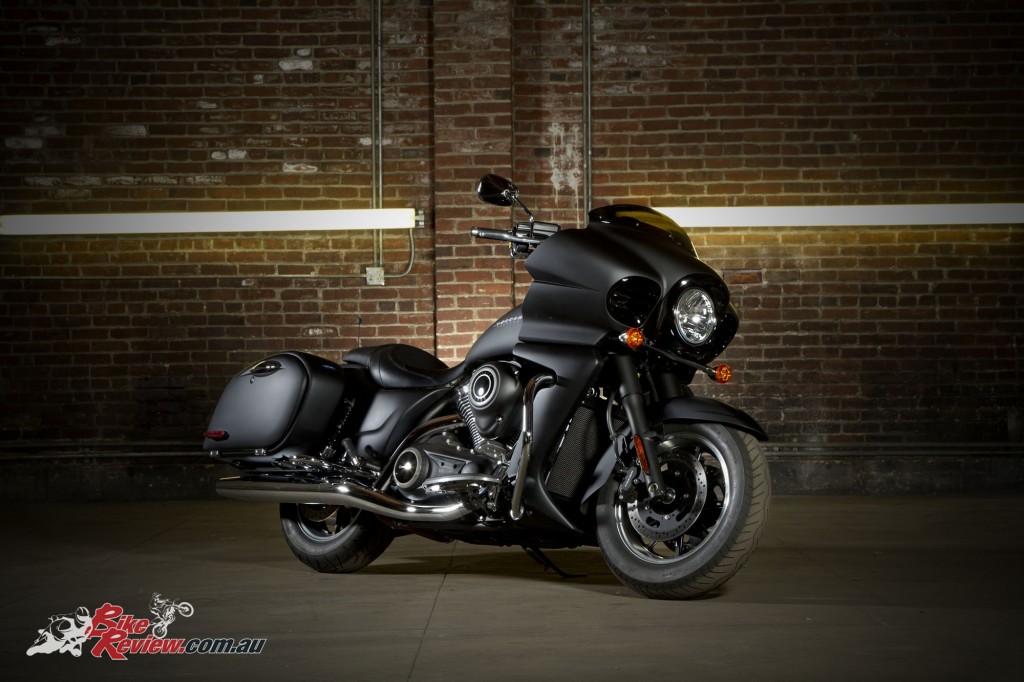 The Vulcan 1700 makes use of a long-stroke 1700cc liquid-cooled four-stroke V-twin, based on the VN2000 and delivery plenty of torque. Bore and stroke are 102 x 104mm, with a SOHC arrangement and dual large capacity airboxes. 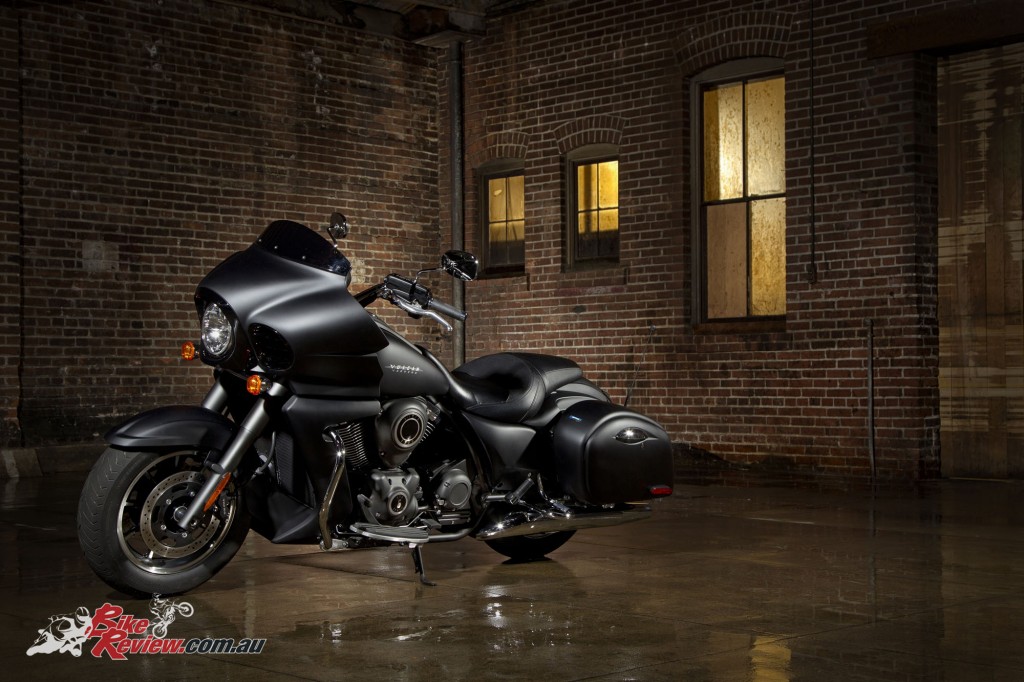 The Vulcan 1700 benefits from a shorter wheelbase than the VN2000 and VN1600 models for lighter and more agile handling, with the front cowl mounted to the frame, which is a double-cradle steel item.

45mm forks on the front end provide a plush ride, with the rear twin air-assisted shocks have four-way rebound damping. Suspension travel front and rear is 140 and 80mm respectively.

This system doesn’t work below 20km/h in order to allow low speed U-turns and maneuverability. 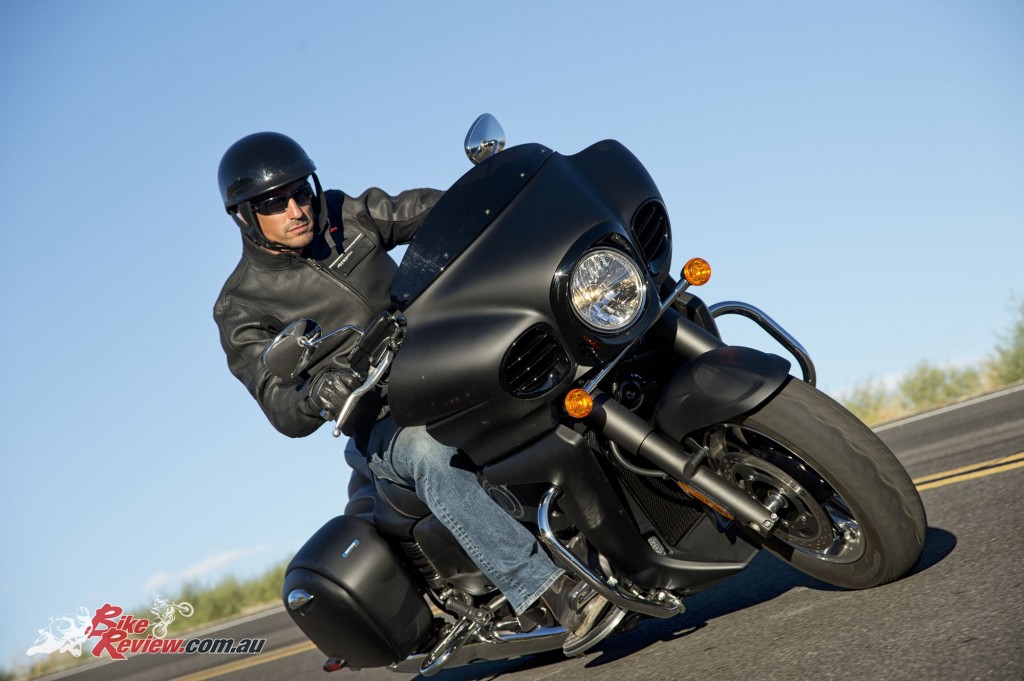 The dash offers plenty of information at a glance, with analogue tachometer and speedometers and a central multi-function LCD screen, with a lower audio LCD screen, which is connected to the high spec audio system, with two 40W speakers, radio and iPod compatibility. This can be controlled by the left switches. 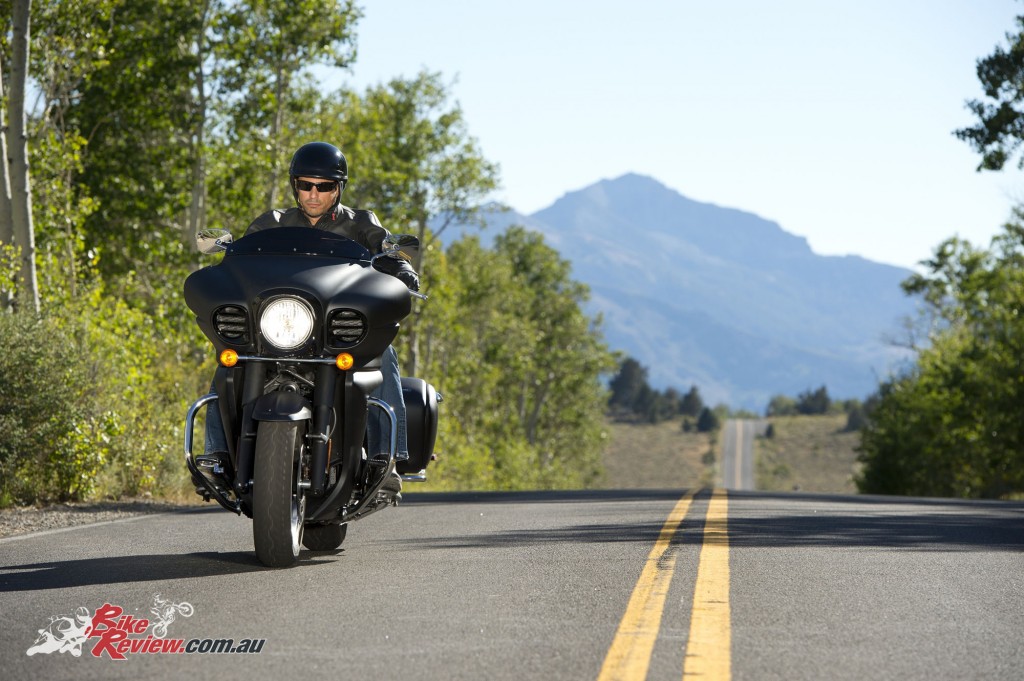 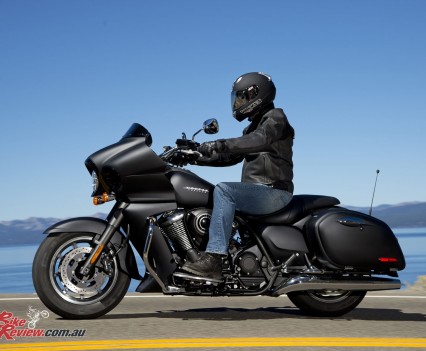 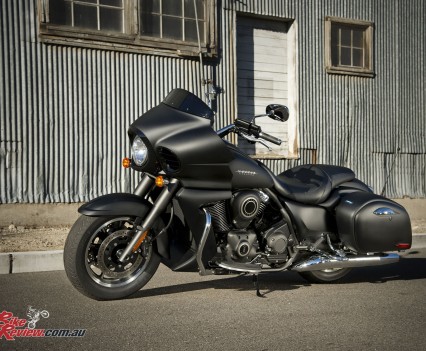 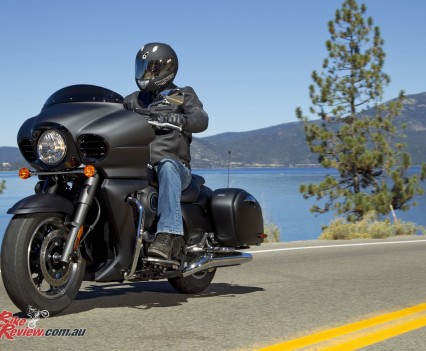 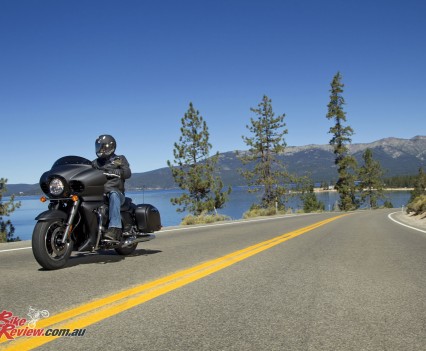 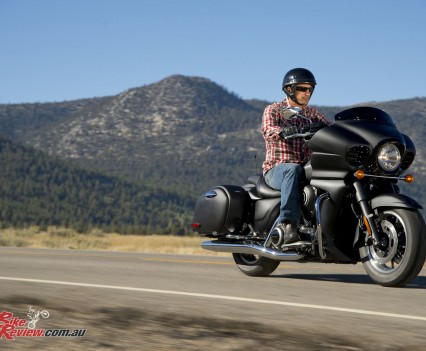 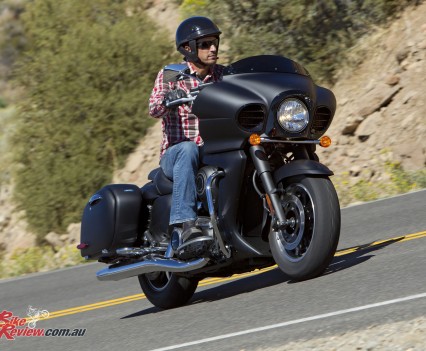 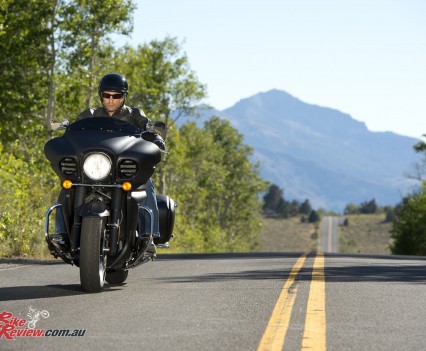 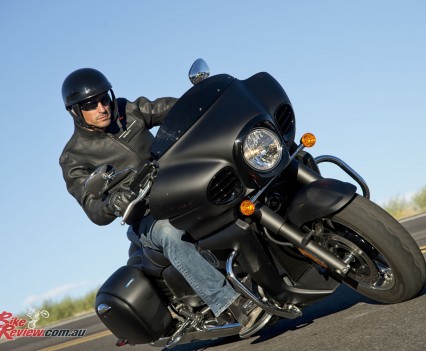 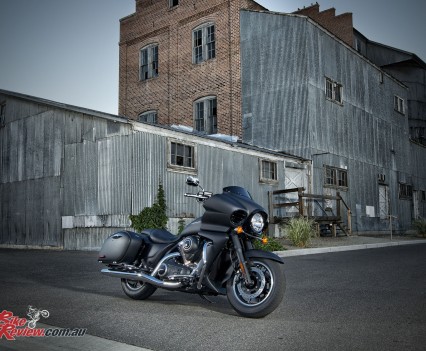 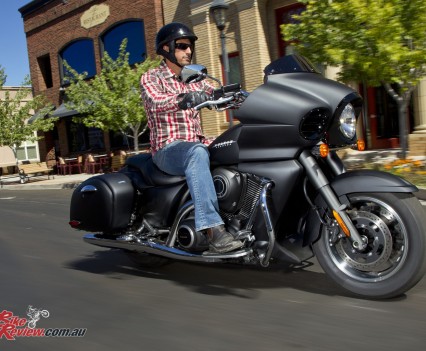 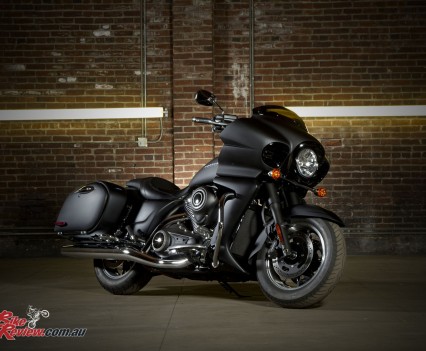 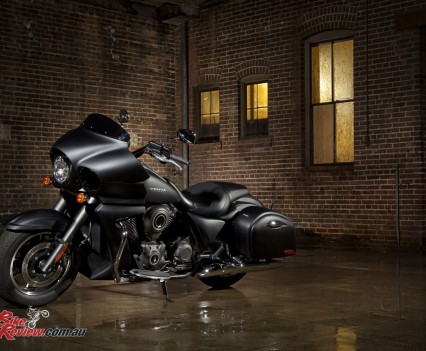 Top end tourer with all the bits… 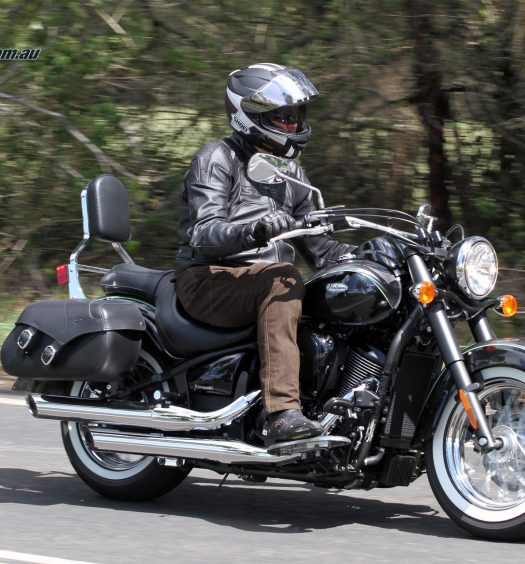