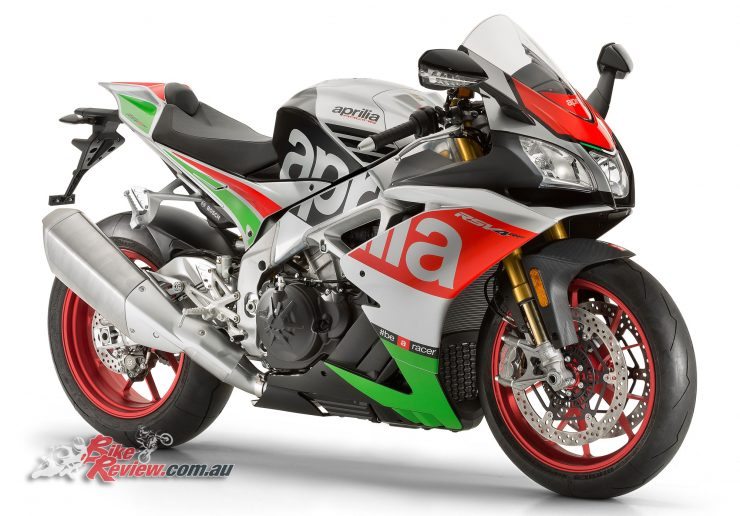 The updated for 2017 Aprilia RSV4 RR and RSV4 RF models have been revealed at Intermot!

The Aprilia RSV4 is the natural evolution of an innovative project, capable in just a few years of dominating World SBK, earning seven world titles in six years and winning in its début in the FIM Superstock Cup, the championship dedicated to bikes that are closely derived from their factory versions. 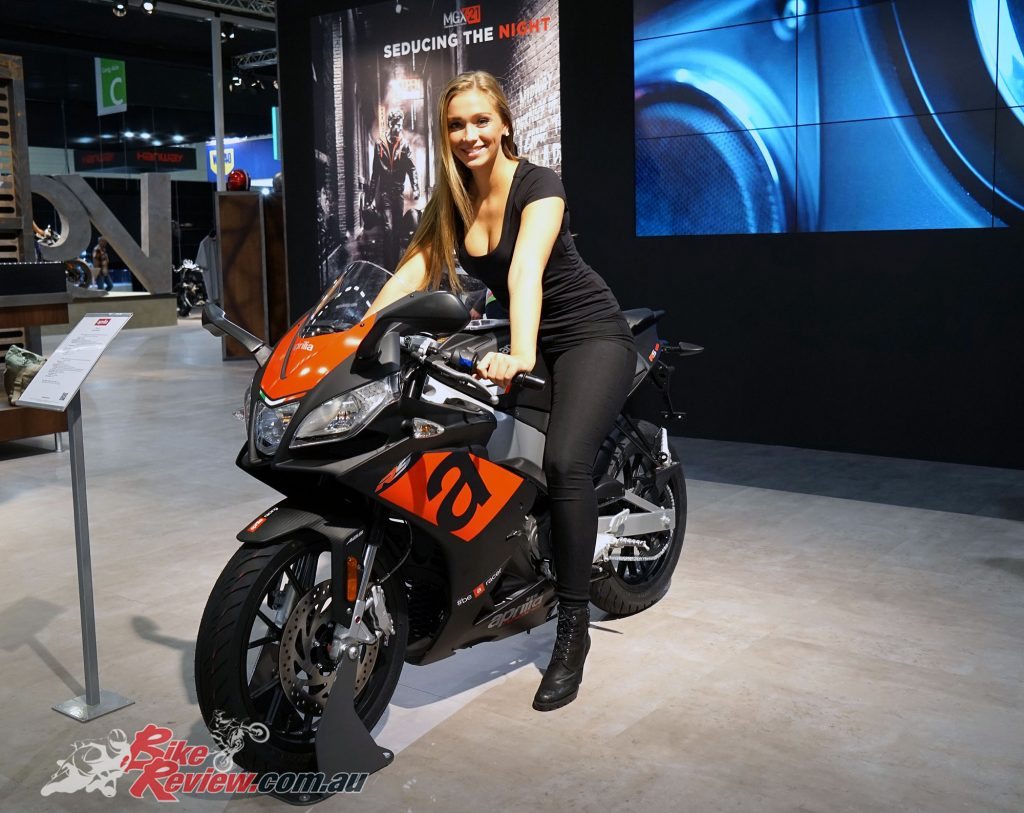 Acclaimed by critics and sought after by bikers from every corner of the globe, the RSV4 has always been the undisputed segment representative, the reference point for sportiness and performance, an example of what can be achieved by exploiting the valuable experience of a victorious Racing Department like Aprilia’s which, in its brief history has taken 54 championship titles.

Skills honed on the track and transferred to the factory product to provide everyone with the same excitement that the motorbikes prepared by Aprilia Racing do. 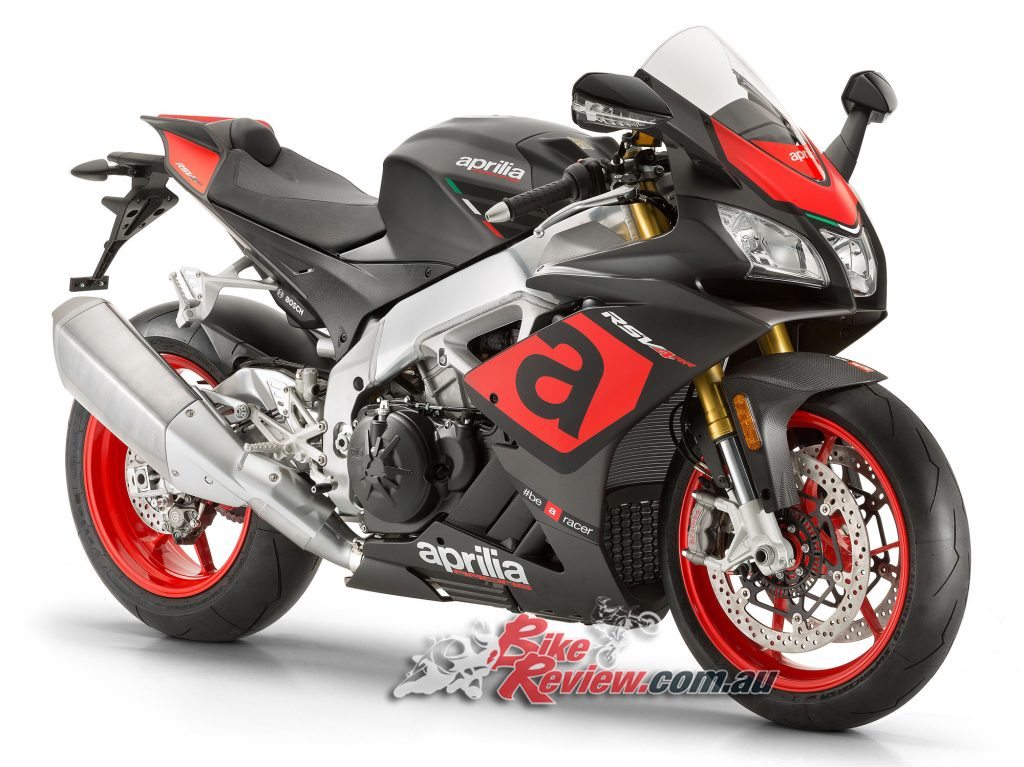 The RSV4 is conceived around a 65° V4 engine never before seen on a factory sport bike, a frame which is the heir to a dynasty that has won 18 titles and 143 Grand Prix races in the 250 GP class, enhanced by the most modern applied electronics systems to manage the engine and the bike’s dynamic performance.

This is a true vocation of Aprilia, which was the first manufacturer to adopt the Ride-By-Wire multimap accelerator as standard equipment, but above all the first to patent the APRC dynamic control system, with the exclusive features of self-calibration and wheelie control, the system that now reaches new levels of effectiveness at the service of top performance.

The primary goal in creating the new RSV4 was the same one that has set this model apart from its birth in 2009: to be the absolute best uncompromising superbike, the one that comes the closest to the current Aprilia racing bikes in terms of performance and effectiveness.

Thanks to the experience acquired in the most selective speed championships such as WSBK and MotoGP, Aprilia is able to transfer technologies to their factory products like the new full Ride-by-wire throttle and the dynamic controls package, APRC, further advanced. 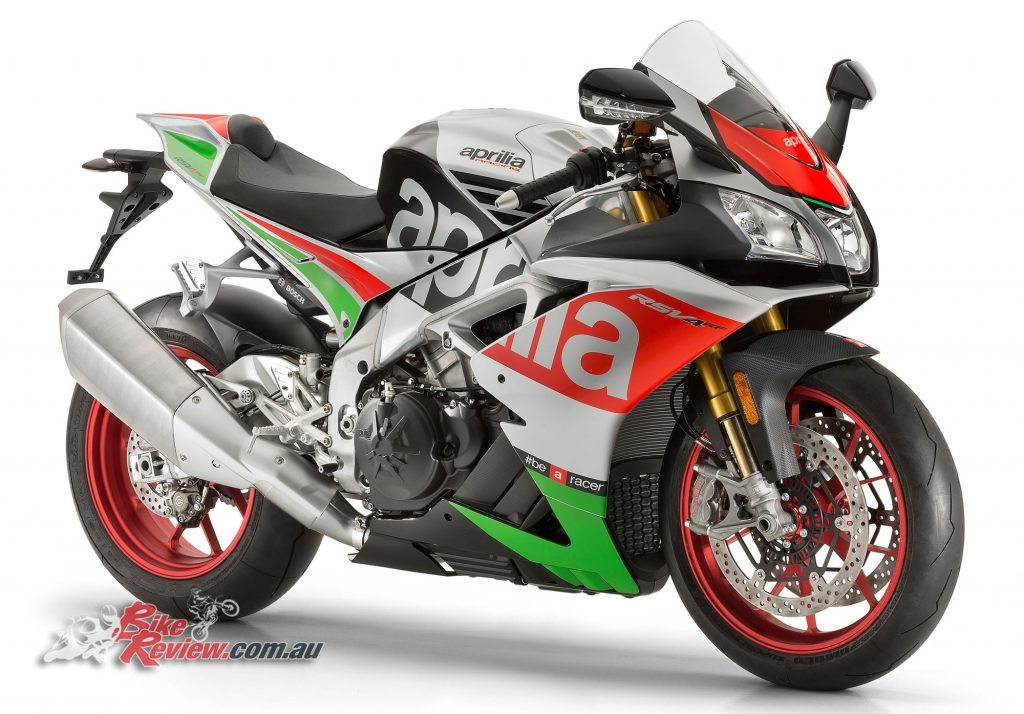 More than one second faster than before

The primary goal followed during development of the new Aprilia RSV4 (in both available versions, RSV4 RR and RSV4 RF) is, as always, only one: to be the fastest superbike in the segment.

In order to achieve this, Aprilia drew from the best Aprilia Racing technology, refining the already exceptional RSV4 in many aspects, such as electronics, suspension and brakes.

Thanks in part to the work done on the powerplant, now compliant with the Euro 4 regulation, without sacrificing anything in terms of power and range of use, the new RSV4 is one second faster than the previous version on average. 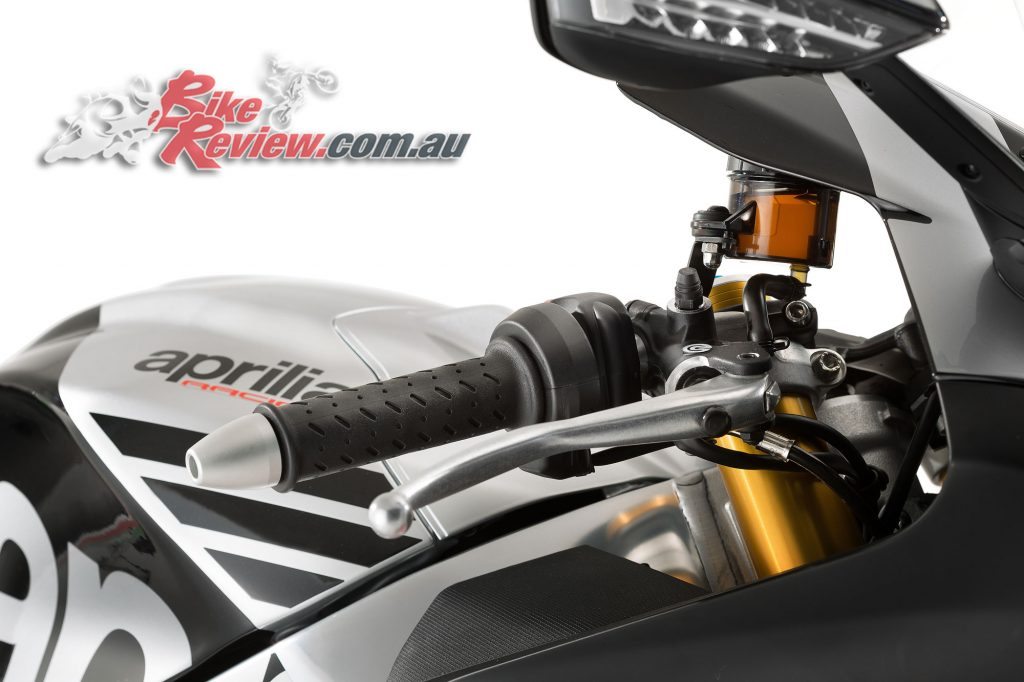 The new APRC: from Aprilia, the cutting-edge in electronics

The Aprilia RSV4 RR and RF make perfect what was already top shelf in the previous versions thanks to a significant improvement to its already exceptional dynamic controls package designed and patented by Aprilia.

The APRC (Aprilia Performance Ride Control) is the well known dynamic control suite derived directly from the winning technology in world Superbike, the most complete and refined of those currently available on the market.

This progress was possible mainly thanks to the repositioning of the inertial platform that governs the operation, improving accurate detection of the dynamic conditions of the bike, resulting in more efficient electronic control strategies. 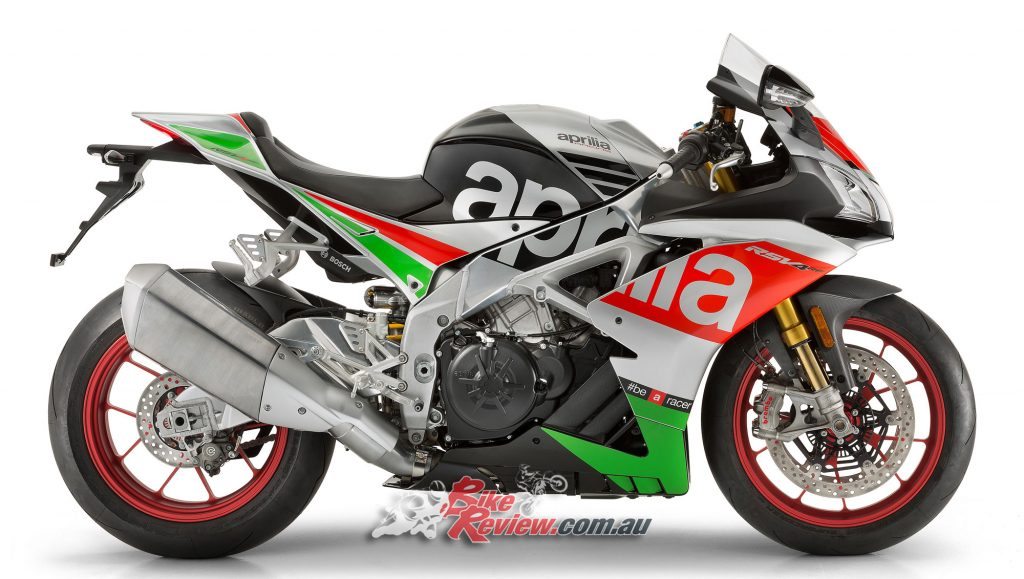 APRC, which comes as standard equipment on the Aprilia RSV4 RR and RF, includes: 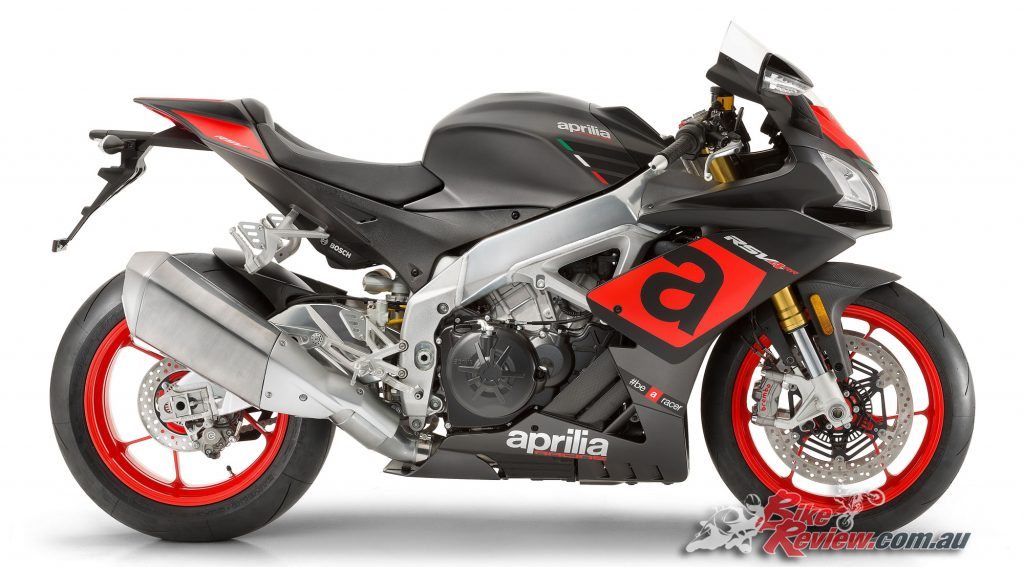 In addition to the fourth generation APRC system, RSV4 RR and RF come from the factory standard with advanced multimap Cornering ABS, developed in collaboration with Bosch to guarantee not only extreme safety on the road, but also the best possible performance at the circuit.

The 9.1 MP system, with truly contained weight and dimensions, is able to optimize braking and the ABS intervention in corners, thanks to a specific algorithm that constantly monitors various parameters such as lateral acceleration, the pressure applied to the front brake lever, the lean, pitch and yaw angle, modulating the braking action in order to better guarantee the ratio between deceleration and stability. 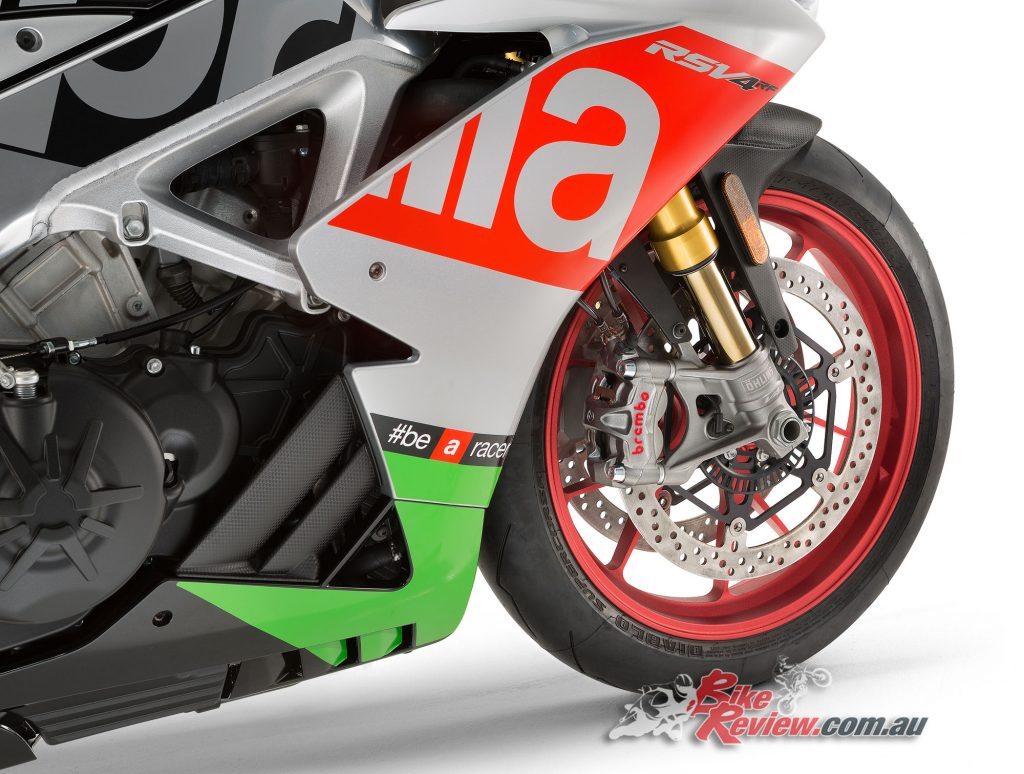 The new ABS system works in unison with the Aprilia RLM (Rear Liftup Mitigation) system that limits the lift of the rear wheel during more abrupt braking. Cornering ABS, fine tuned in accordance with Aprilia’s specific indications, is adjustable to 3 levels of sensibility and can be switched off.

Each of the three Cornering ABS maps can be combined with any of the three new engine maps (Sport, Track, Race), allowing riders with different experience and skill levels to find the best possible combination for their style.

The three maps are “full power” and differ in the way they unload the 201 HP of which the Aprilia V4 is capable onto the asphalt, in addition to the percentage of engine brake dedicated to them.

The total revamping of the RSV4’s electronics management is completed by the new colour TFT instrumentation, a true digital computer with exceptional display options. The two selectable screen pages (Road and Race, both with night and day backlighting) correspond to as many represented indexes. 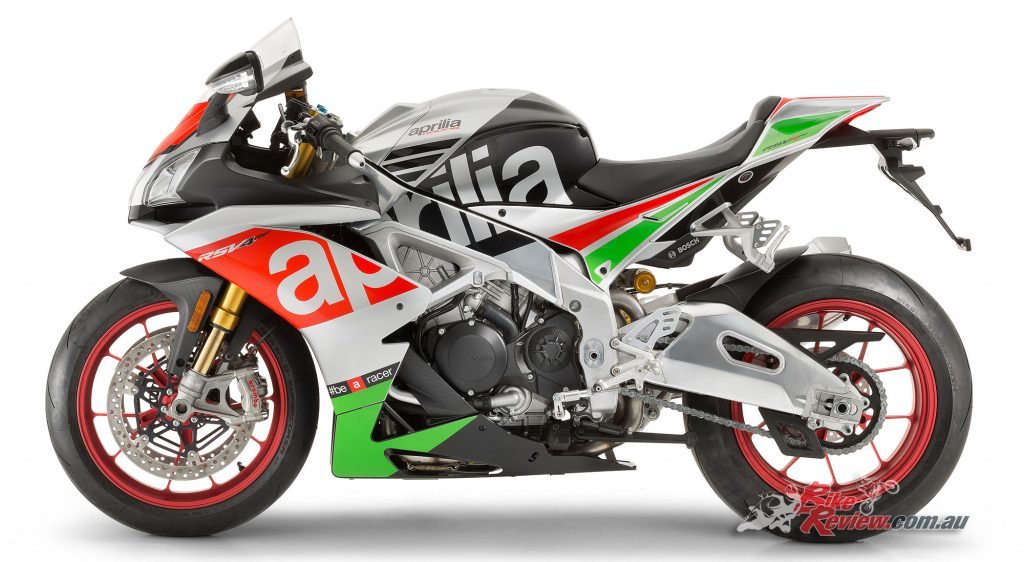 Standard equipment for the RSV4 RF (and optional for the RSV4 RR), there is a new version of the V4-MP, the Aprilia multimedia platform that lets you connect your smartphone to the vehicle via Bluetooth, introducing for the first time a true corner by corner electronic settings calibration system with data that can subsequently be downloaded to your laptop (or displayed directly on the smartphone) for analysis, just like they do at the races.

The new V4-MP adds a new connection protocol that reduces smartphone battery consumption to a minimum, in addition to providing a larger range of circuits already mapped in which you can manage the electronic settings corner by corner, as well as user acquisition of a new circuit that is not in the list Aprilia has provided.

The V4-MP also includes the infotainment system, introduced by Aprilia for the first time on the new RSV4, to manage voice commands and incoming/outgoing telephone calls with your smartphone. These activities are also displayed and managed by the digital instrumentation. 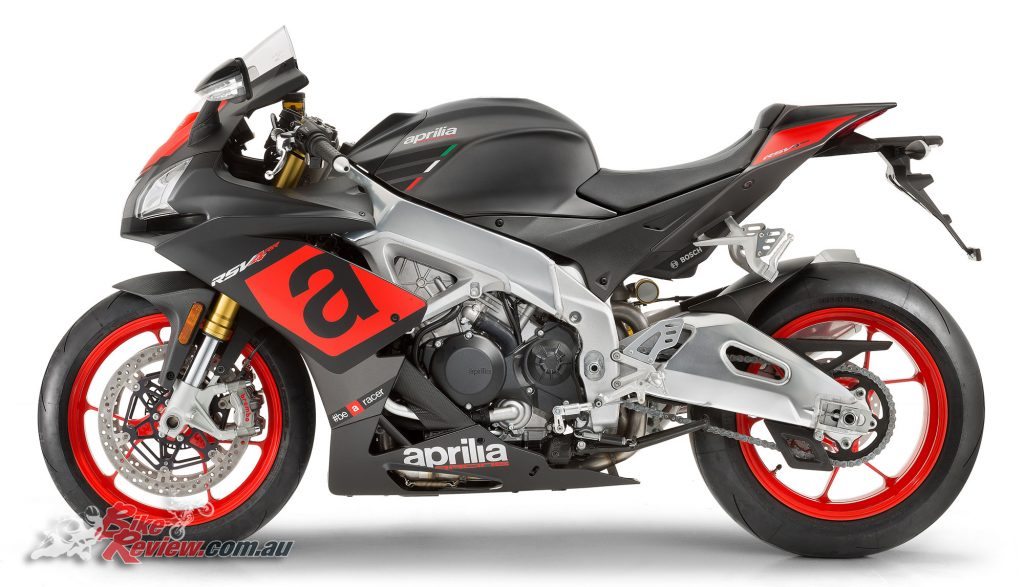 The primary and unique characteristics of this gem of Italian technology, the ones that led to the creation of the best superbike of all times, remain unchanged. This is the world’s first full scale production motorcycle with a high performance narrow V4 engine, the most revolutionary and powerful engine ever built by Aprilia.

An engine that has been made unmistakeable because of the use of “total” electronics, because of its extremely compact size and light weight.

The changes implemented in this evolution of the Italian V4 not only resulted in achieving the goals of Euro 4 approval, but also increasing overall reliability and performance, without sacrificing power and maximum torque (which remain respectively at 201 HP at 13,000 rpm and 115 Nm at 10,500 rpm), and not even that inimitable sound that has always been a true soundtrack of the Aprilia V4 engines.

The powerplant earns a new exhaust system with a silencer that has a double oxygen sensor and a built in valve. The engine ECU is new, with superior calculating capacity able to manage the rise in maximum revs, now 300 rpm higher.

The engine now boasts an increased extension capacity and it was also for this reason that the variable timing intake ducts were eliminated, no longer deemed necessary. This decision contributed to reducing the weight of the fuel system parts by 500 grams.

In order to increase performance and reliability, new and lighter pistons were introduced with brand new segments that reduce the blow-by effect. Furthermore, a honing treatment was added for the connecting rod heads, further reducing friction.

The valve recall springs are also new in order to guarantee reliability during the heaviest operating loads, whereas the valves have benefited from optimized timing, capable of increasing performance and reliability. Last, but not least, the gearbox now has a linear sensor that guarantees impeccable gearshift operation. 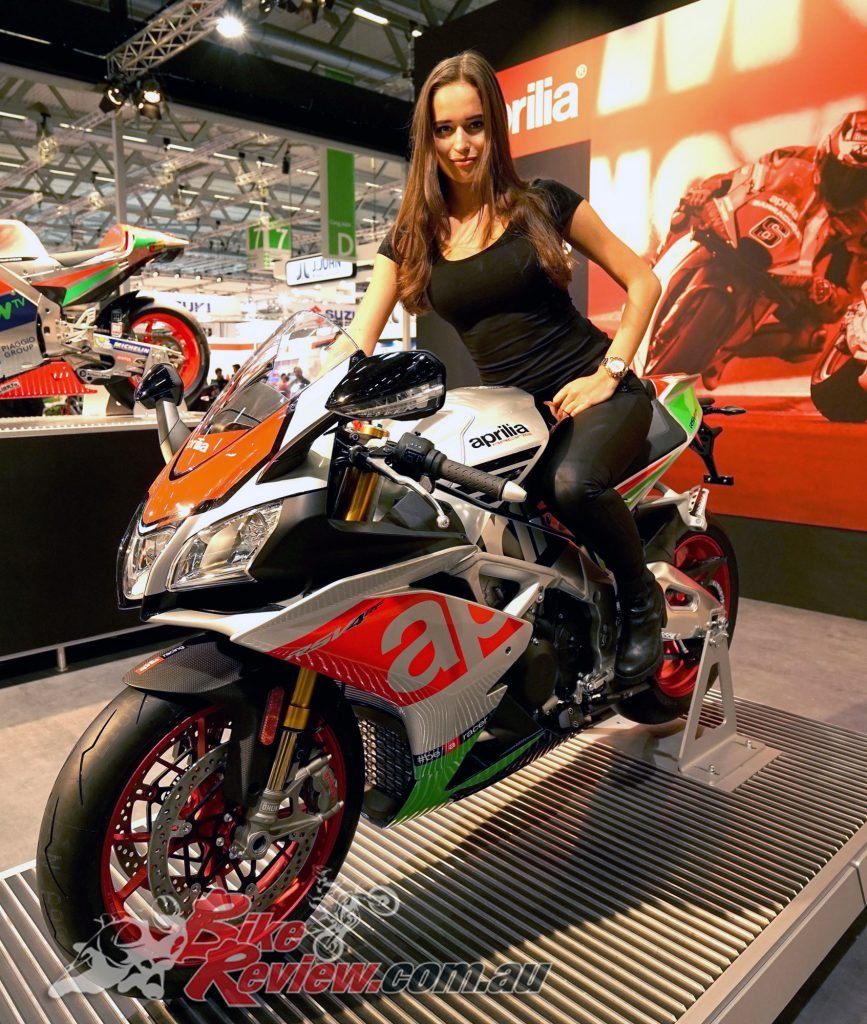 The chassis: new brakes and suspension

Aprilia is known as one of the best chassis manufacturers in the world and the RSV4 represents the synthesis of the technical prowess Aprilia has acquired in top level world championships. A particularity which is still exclusive to the RSV4 RR and RF (and which has always been a characteristic of the previous generation RSV4 models) is the exceptional possibility of adjustments that the standard equipment chassis is able to offer.

In fact, the Aprilia is the only superbike that allows the rider to adjust the engine position in the frame, the headstock angle, the swingarm pivot and the rear end height, naturally in addition to the fully adjustable suspension. Just like a real racing bike.

The RF version of the RSV4 earns new and more sophisticated suspension systems with fine adjustments both in hydraulics and spring preload: the fork is a latest generation Öhlins NIX unit, as is the TTX shock absorber; the latter is operated by new progressive linkage that increases the reaction time of the shock absorber itself.

There is also an adjustable steering damper, also supplied by Öhlins. On the new RSV4, Aprilia introduces important changes in the Brembo braking system: the front relies on a pair of new 5 mm thick steel discs with diameter increased to 330 mm, gripped by the monobloc M50 callipers fitted with new superior friction coefficient brake pads.

Aprilia RSV4 RR represents a top shelf technical platform, ready to provide the rider with a “race replica” performance and feeling. The RSV4 RR incorporates all the electronic, engine and brake innovations introduced on the RSV4 RF.

As standard equipment, it also has features which were once exclusive to the Factory version, such as magnesium external housings, oil sump and head covers and a wide range of chassis adjustments. Aprilia RSV4 RR is available in two new attractive colour schemes, both matt, on a black and grey base (grigio Bucine and nero Ascari) with red wheel rims.

Aprilia RSV4 RF is the exclusive version that uses new Öhlins suspension systems and lightweight aluminium forged rims as standard equipment. It stands out for the dedicated graphic that maintains the evocative name of the previous “Superpole” version, but it has a different graphic pattern.

Aprilia has designed and developed a wide range of accessories so you can personalise your RSV4 RR and RF. High quality selected items to increase performance, make them more attractive or more comfortable.