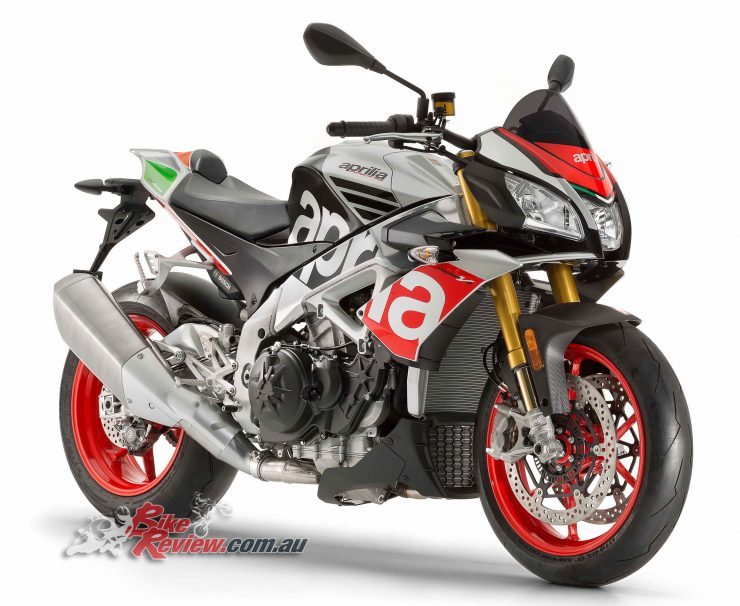 Aprilia have revealed the 2017 Tuono V4 1100 RR and Factory machines at Intermot, with the Tuono receiving completely revamped electronics for the coming year. 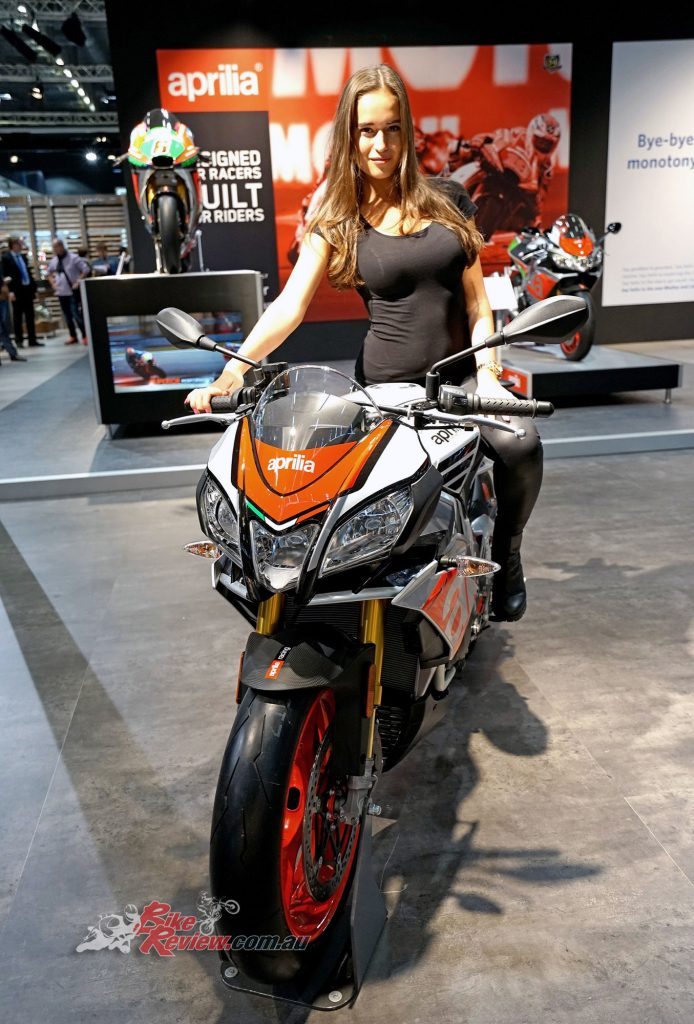 The Aprilia naked range which has been voted over time as one of the most adrenaline pumping and efficient bikes ever, achieves absolute performance levels and sophistication, thanks to Aprilia’s know-how acquired over years of winning premier level competitions and the experience of the Tuono history.

The Tuono V4 family of motorbikes is made up of two distinctly outfitted models. Tuono V4 1100 RR represents an exceptional thrill machine, the heir to a dynasty of naked sport bikes acclaimed by critics as the most effective and fastest bike in its segment. 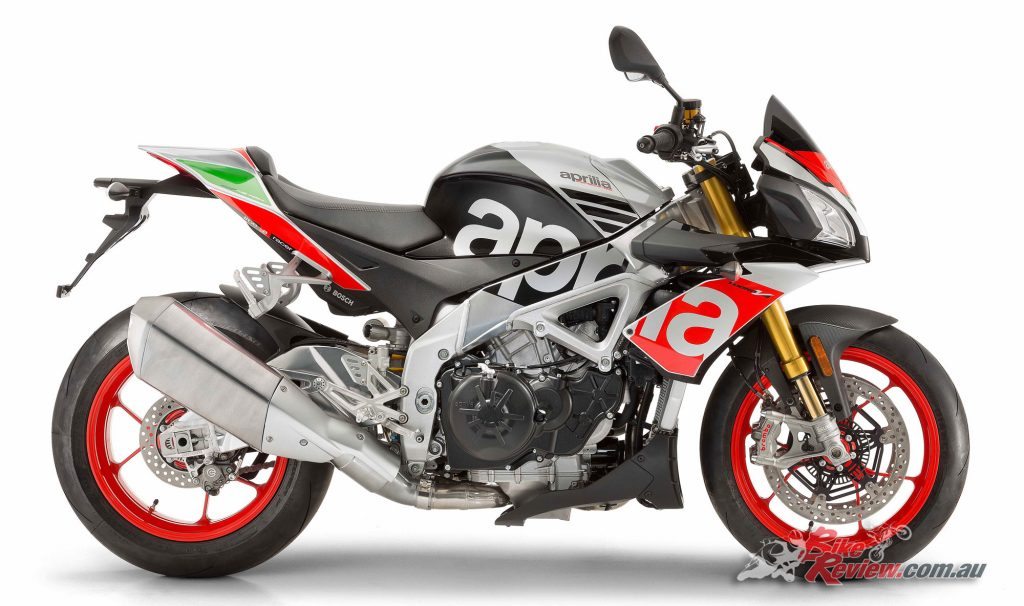 Tuono V4 1100 Factory is the more exclusive version, dedicated to an extremely demanding public; this bike is equipped with components which are largely derived from the Aprilia RSV4 RF superbike.

The evolutionary step that Aprilia presents for 2017 involves both models that, as before, therefore continue to stand out for their factory outfitting and the graphics. 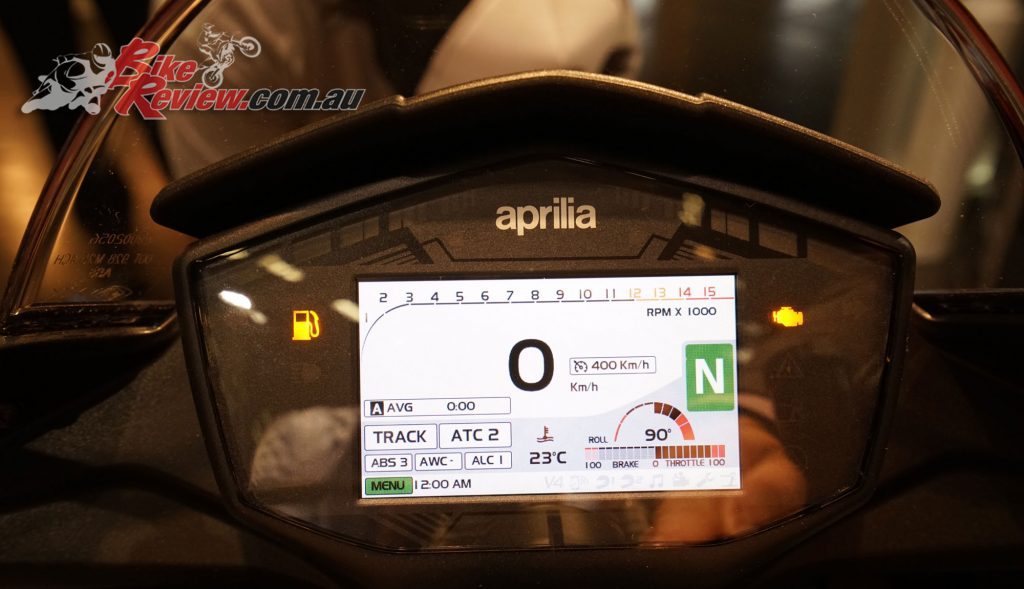 The greatest innovations have to do with the Aprilia Tuono V4’s on board electronics, that has always been considered as the “best in class”, where the APRC system stands out. Aprilia Performance Ride Control is the patented control suite derived directly from the winning technology in world Superbike.

The repositioning of the inertial platform that allows APRC operation has improved accurate detection of the dynamic conditions of the bike, resulting in more efficient electronic control strategies. 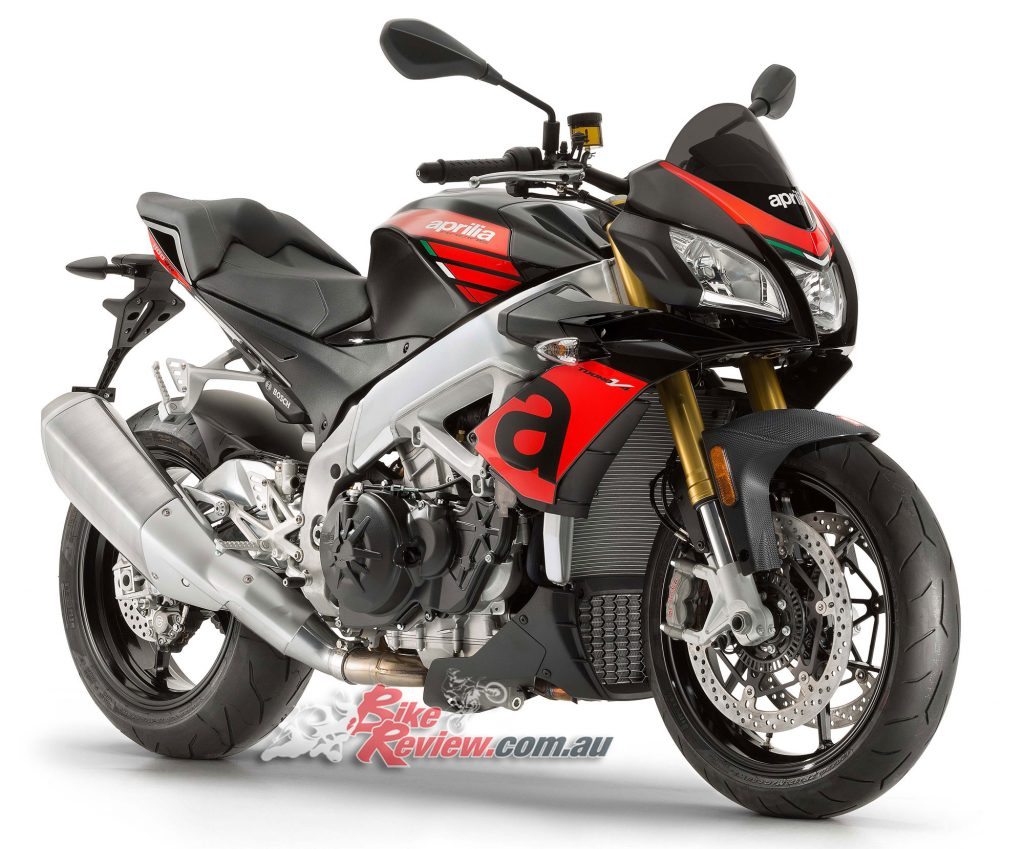 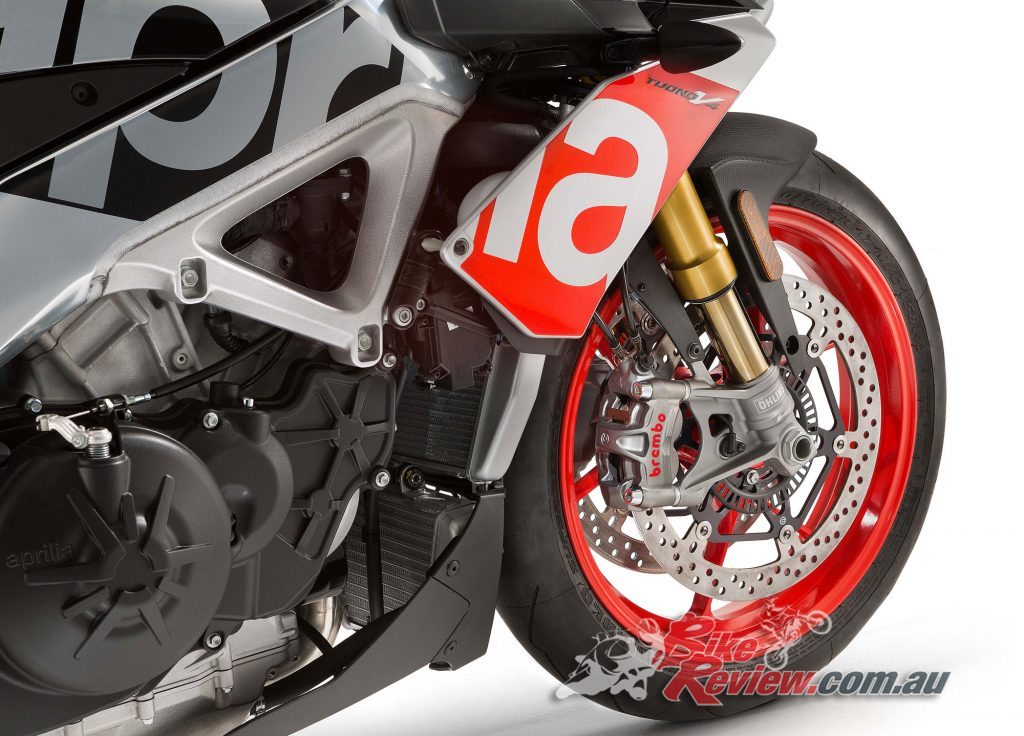 The new Tuono V4 1100 range is fitted with the advanced multimap Cornering ABS system, developed in collaboration with Bosch to guarantee maximum safety on the road, without sacrificing any performance on the track.

The 9.1 MP system, with truly contained weight and dimensions, is able to optimize braking and the ABS intervention in corners, thanks to a specific algorithm that constantly monitors various parameters such as lateral acceleration, the pressure applied to the front brake lever, the lean, pitch and yaw angle, modulating the braking action in order to better guarantee the ratio between deceleration and stability.

The new ABS system works in unison with the Aprilia RLM (Rear Liftup Mitigation) system that limits the lift of the rear wheel during more abrupt braking. Cornering ABS, fine tuned in accordance with Aprilia’s specific indications, is adjustable to 3 levels of sensibility and can be switched off. 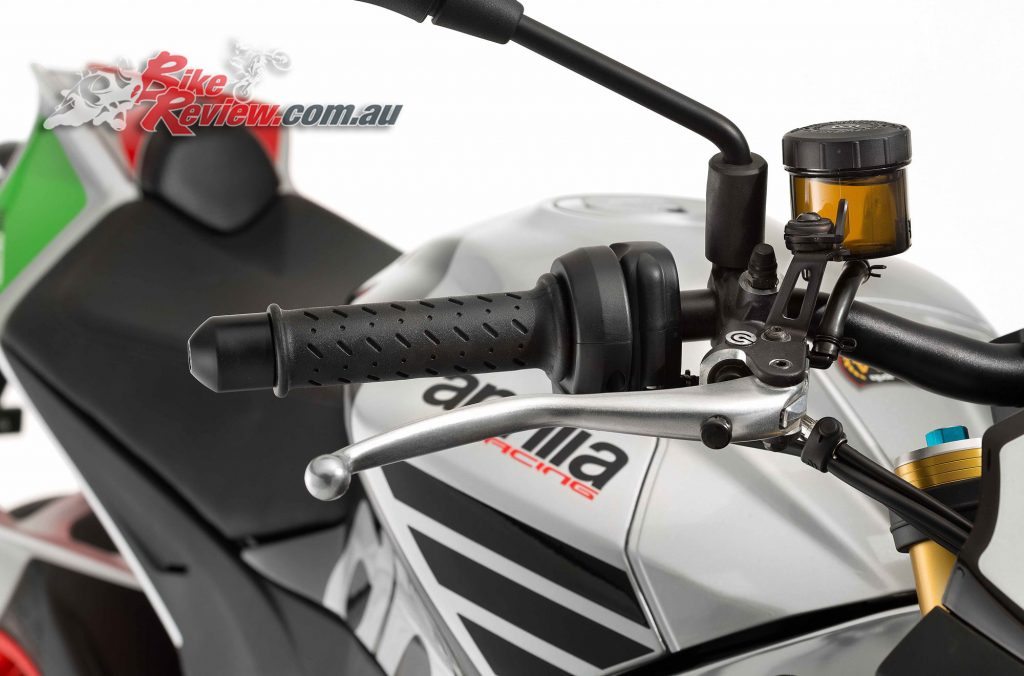 In order to allow riders with various levels of experience to find the best possible combination, each of the three Cornering ABS maps can be combined with any of the three new engine maps (Sport, Track, Race). The latter are all three “full power” and differ in the way they dole out the 175 HP of which the Aprilia V4 is capable, in addition to the percentage of engine brake dedicated to them.

The colour TFT digital instrumentation is also entirely new, with exceptional display options. The two selectable screen pages (Road and Race, both with night and day backlighting) correspond to as many represented indexes.

There is an optional new version of the V4-MP, the Aprilia multimedia platform that lets you connect your smartphone to the vehicle, introducing a true corner by corner electronic settings calibration system with data that can subsequently be downloaded to your laptop (or displayed directly on the smartphone screen) for analysis, just like they do at the races.

The new V4-MP adds a new connection protocol that reduces smartphone battery consumption to a minimum, in addition to providing a larger range of circuits already mapped in which you can manage the electronic settings corner by corner, as well as user acquisition of a new circuit that is not in the list Aprilia has provided. 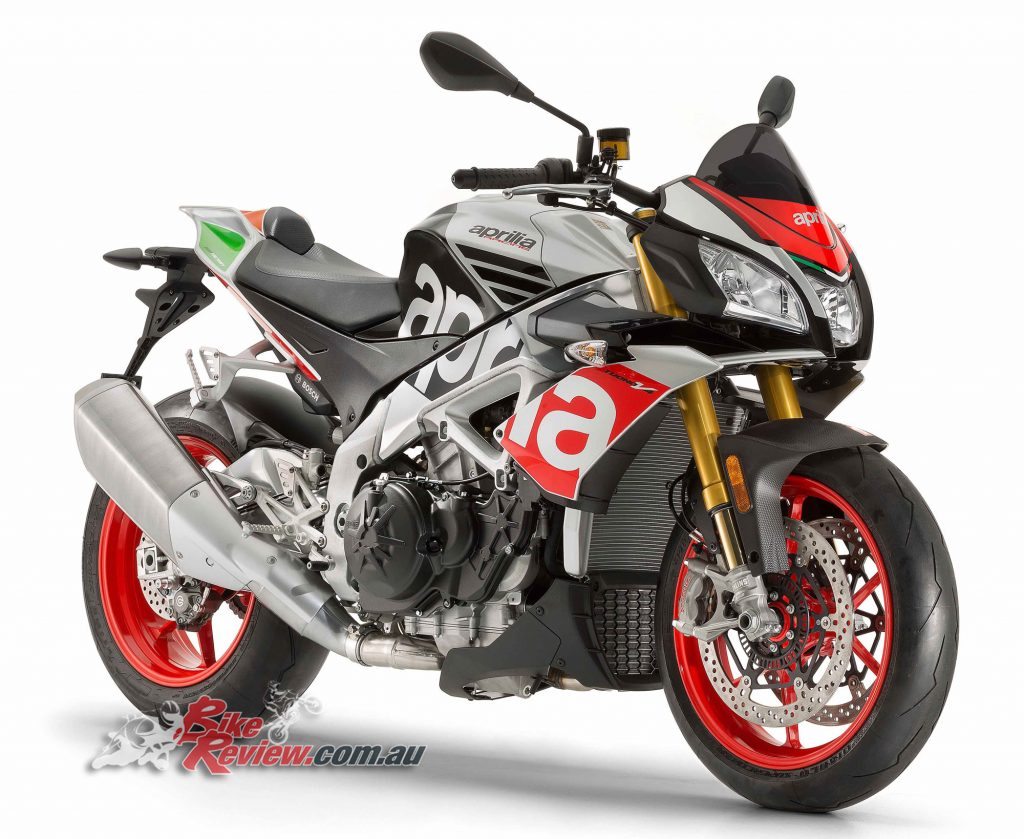 The Tuono V4 1100 is the only naked powered by a 65° V4 engine with unique characteristics. The narrow V architecture has made it possible to make an engine that is extremely compact lengthways which helps to centralise weights and to have a compact chassis.

The changes made in this evolution of the Italian V4 not only resulted in earning Euro 4 approval, but also in increasing overall reliability and performance, without sacrificing any of the great character and marvellous sound that bikers love so much. 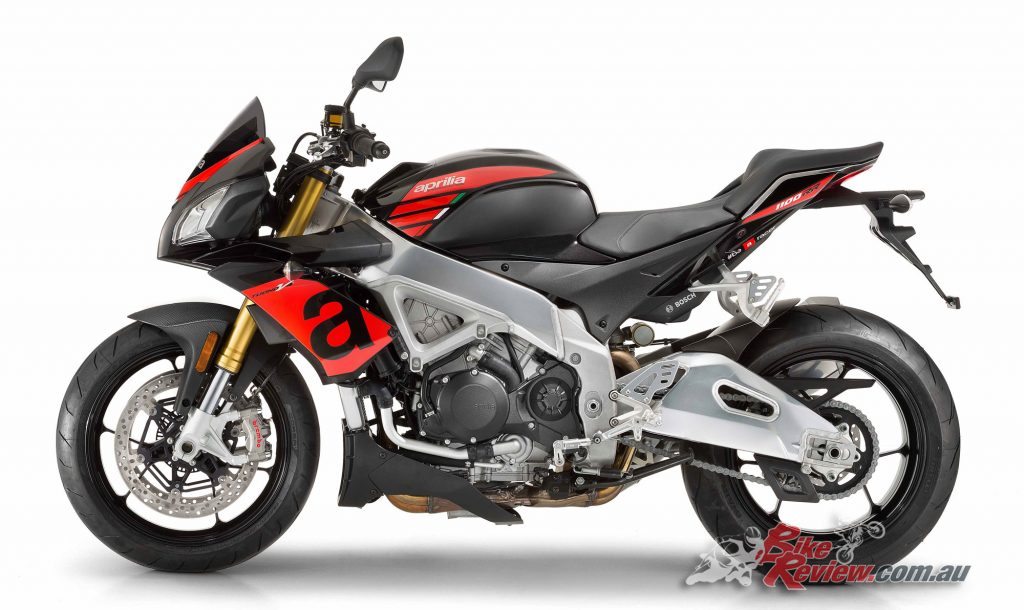 The powerplant earns a new exhaust system with a silencer that has a double oxygen sensor and a built in valve. The engine ECU is new, with superior calculating capacity able to manage the rise in maximum revs, now 500 rpm higher. In order to guarantee maximum reliability, decreasing friction at the same time, the piston pins have DLC surface treatment, whereas the connecting rod heads boast a surface honing treatment.

The combustion chambers are no longer obtained through a fusion process, but by a finer, numerically controlled mechanical process, whereas the gearbox now has a linear sensor that guarantees impeccable gearshift operation. 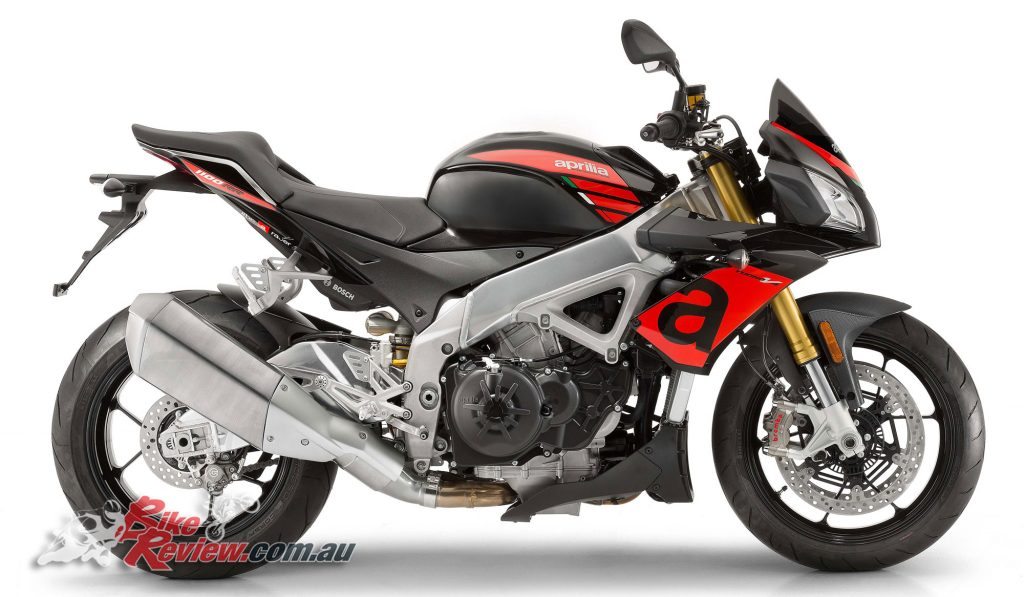 Suspension and brakes directly from the new RSV4

If, on one hand, the new Tuono V4 range fully confirms all the proverbial qualities of handling and stability stemming from a frame that is closely derived from that of the Aprilia RSV4, seven-time World Superbike champion, on the other, it introduces important news in the brakes and suspension department.

The front Brembo braking system comes directly from the one on the new RSV4 and relies on a pair of new steel discs that have been increased to 330 mm, gripped by the new monobloc M50 callipers and activated by a radial master cylinder on the handlebar.

The Aprilia Tuono V4 1100 Factory also has a prestigious Öhlins NIX, with fully adjustable hydraulics and spring preload. This unit saves about 400 grams compared with the previous one and is combined with the same brand rear shock absorber and steering damper (also adjustable). 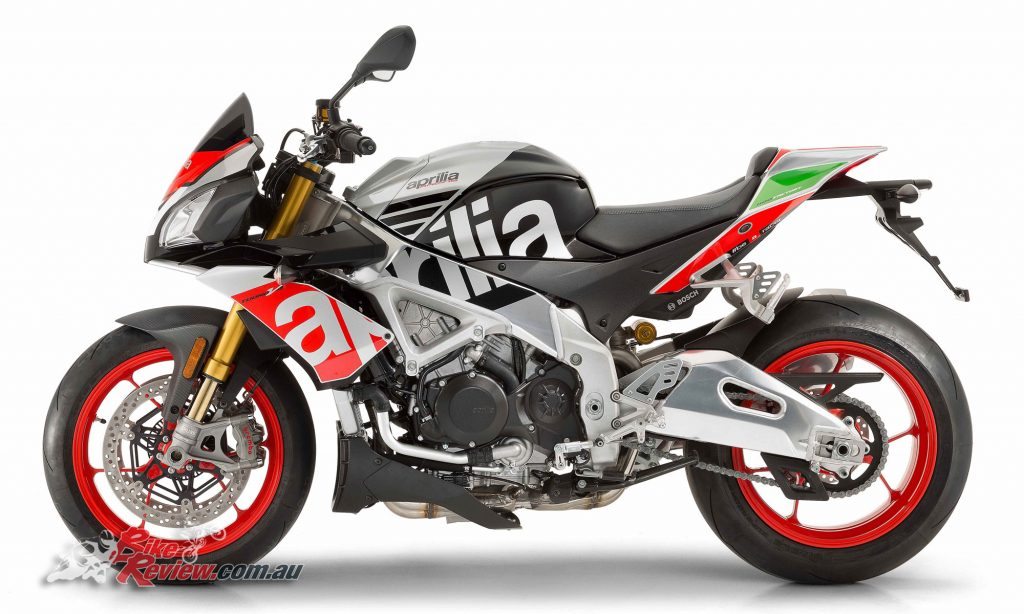 Tuono V4 1100 Factory stands out technically because of the most refined trio of Öhlins suspension systems and stylistically because of its magnificent tail fairing (approved for two-up) derived from the RSV4. The cast aluminium wheel rims are the same for both models: their lightweight quality contributes to a maximum reduction of the gyroscopic effect, all to the advantage of great handling.

Tuono V4 1100 Factory is shod with the more sporty Pirelli Diablo Supercorsa, with a wider 200/55 on the rear, in any case approved for street use and available for the Tuono V4 RR as well which, on the other hand, comes standard with 190/55 on the rear and new Pirelli Diablo Rosso III tyres.

Aprilia has designed and developed a wide range of accessories so you can personalise your Tuono V4 1100. These are select high quality items that you can use to increase the performance of your Aprilia Tuono V4, make it more attractive or more comfortable.