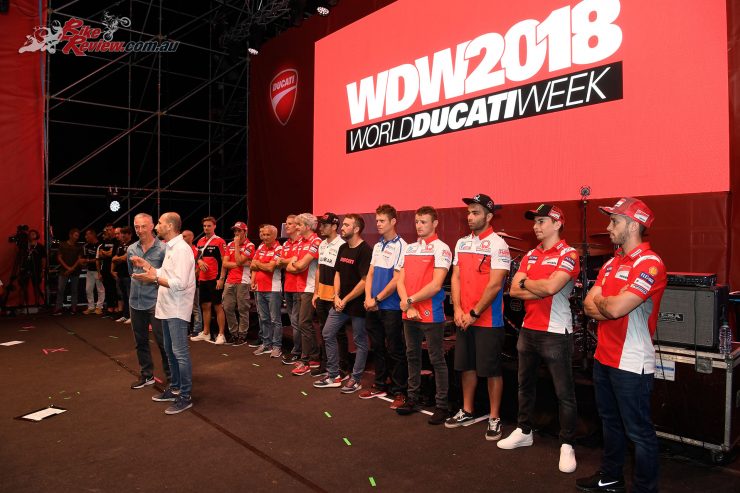 The 10th edition of World Ducati Week ended with a record turnout, as the event engaged and excited tens of thousands of motorcyclists coming from all over the world, meeting at the Misano World Circuit “Marco Simoncelli” to celebrate and share their enthusiasm for Ducati. 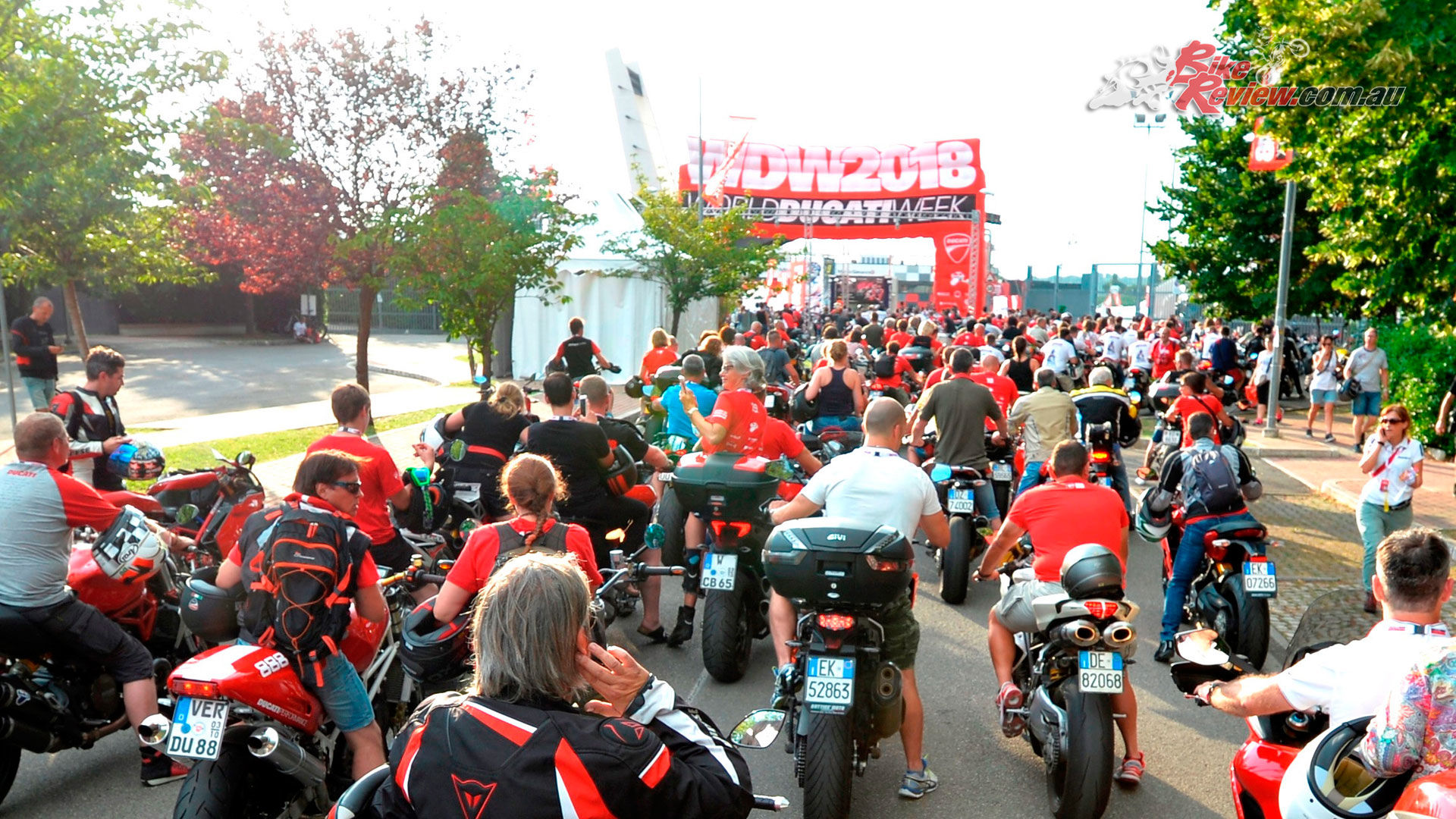 An incredible number of people and lots of motorcycles made this unique celebration even greater. In three days there were 91,596 attendees at the Misano World Circuit, exceeding the previous record of 81,000 attendees set in 2016. The participants travelled to the Adriatic Riviera from five continents, representing 73 countries. 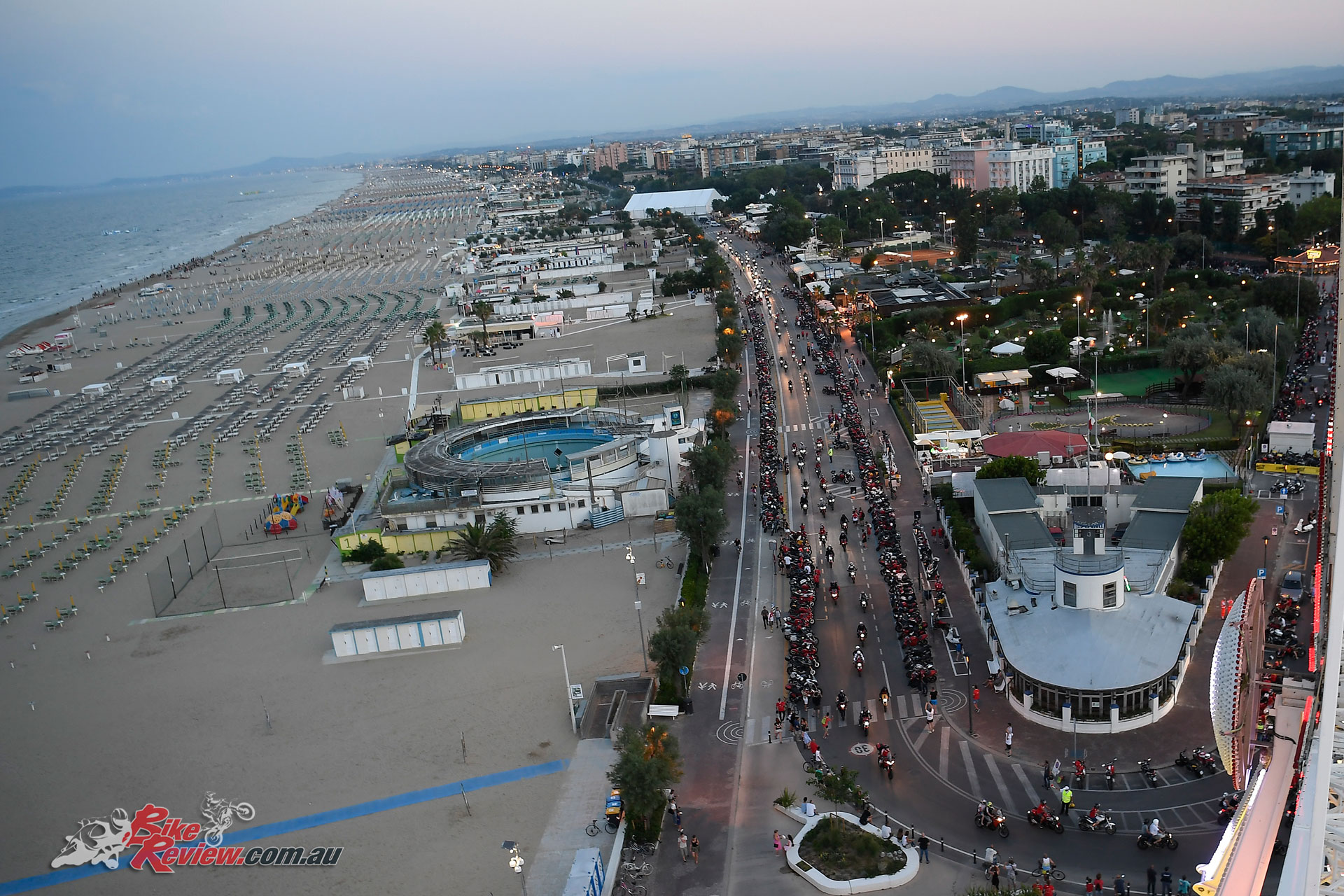 While 60 per cent of the riders were Italian, the remaining 40 per cent are evidence of the power and appeal of the Ducati brand around the world. Of particular note were Ken Lu and Lv Fei, the two Chinese riders who rode their Multistrada 1200 Enduro from Xinjiang (China) to Bologna in only seven days. The journey across continents was an extraordinary undertaking which saw them travel 7575 km through 10 countries to arrive at Misano Adriatico. 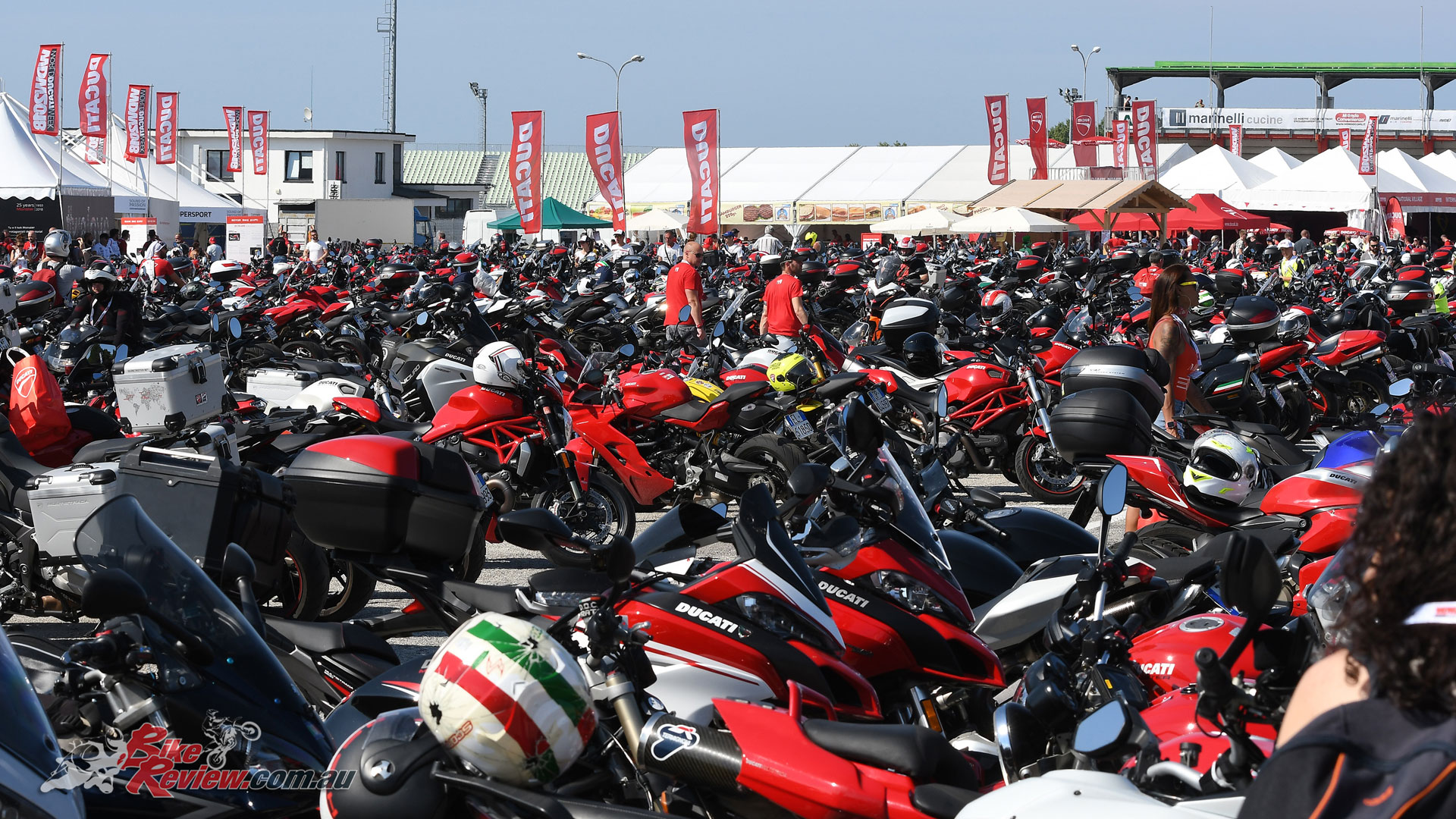 Many activities and opportunities made WDW2018 a unique event. Meetings and autograph sessions with Ducati riders, riding courses and test rides of new motorcycles, taxi drives on the track with high performance Lamborghini, Audi and Seat cars, technical courses at Ducati University, performances by stuntmen and laps on the track all take place. 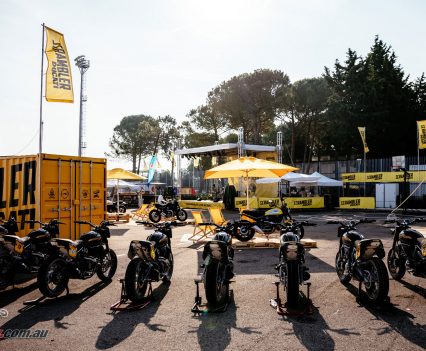 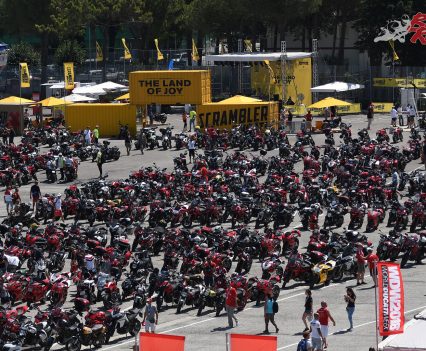 Many thematic areas, each with different activities and atmospheres, include the colourful “Land of Joy” of the Ducati Scrambler world, the Monster Village (celebrating the iconic bike’s 25th anniversary), an area dedicated to the Panigale and the Multistrada Experience featuring Carlin Dunne’s Multistrada 1260 Pikes Peak, winner of Pikes Peak 2018 race. 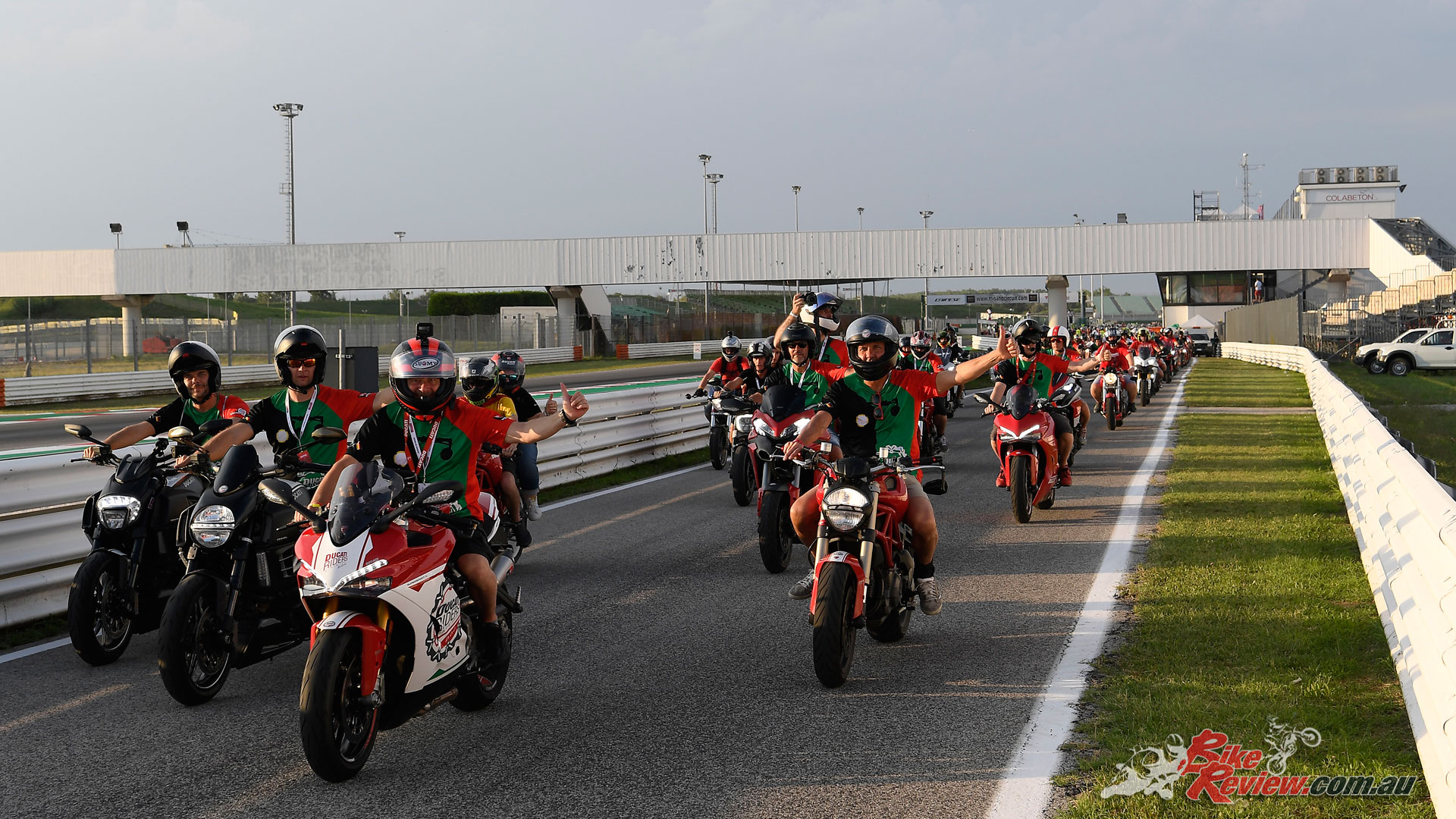 The event surface area was impressive, including a total of about 90,000 square metres inside the Misano World Circuit “Marco Simoncelli”, 75,000 in the paddock and more than 15,000 dedicated to the off-road area and Ducati Scrambler Flat Race & School and DRE Safety. 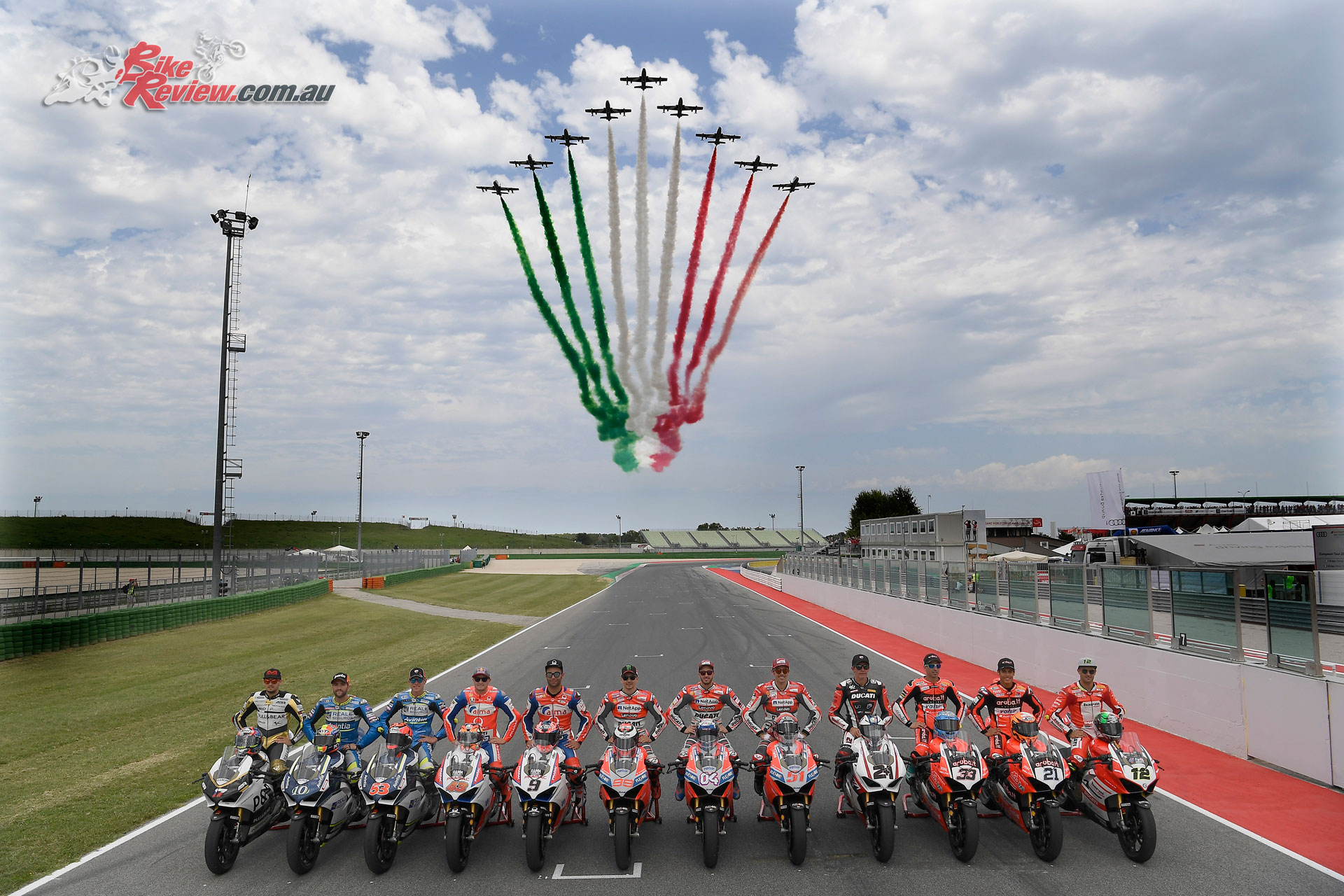 One of the most exciting moments of this edition of WDW took place at 1 pm on Saturday, 21 July when the “Race of Champions” started, preceded by a spectacular flyover of the Frecce Tricolori aerobatic team. The race featured 12 Ducati MotoGP and SBK Champions competing on the Misano circuit riding the Panigale V4 S, specially prepared with racing configuration and customised liveries. 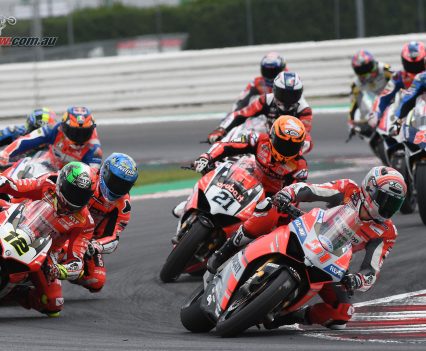 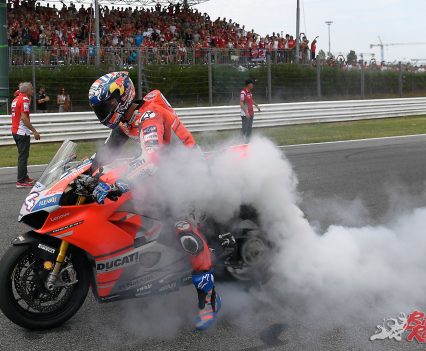 A real race that was won by Michele Pirro, followed by Rabat, Forés, Miller, Melandri, Rinaldi, then Dovizioso, Siméon, Petrucci, Lorenzo, Abraham and Bayliss to complete the exceptional line-up of the “Race of Champions”. 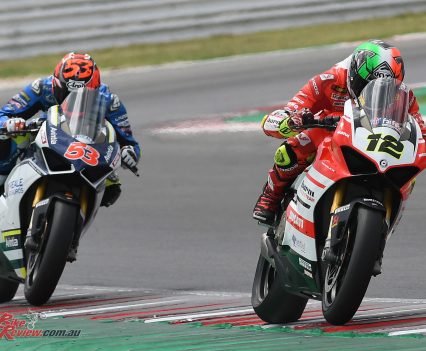 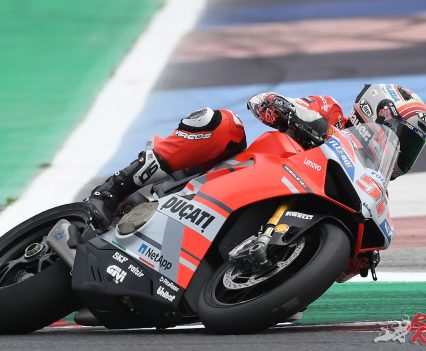 Ducati also decided to give to fans all over the world the chance to buy the 13 Panigale V4 S bikes from the “Race Of Champions” (including the one prepared for Chaz Davies, unable to participate due to an accident during training, and therefore replaced by Xavier Siméon) through a public auction on eBay. A dream that becomes reality for the fans of the brand starting at 6 pm on Saturday afternoon, an incredible number of bids being made on the motorcycles before the auctions end on Saturday, 28 July at 6 pm. 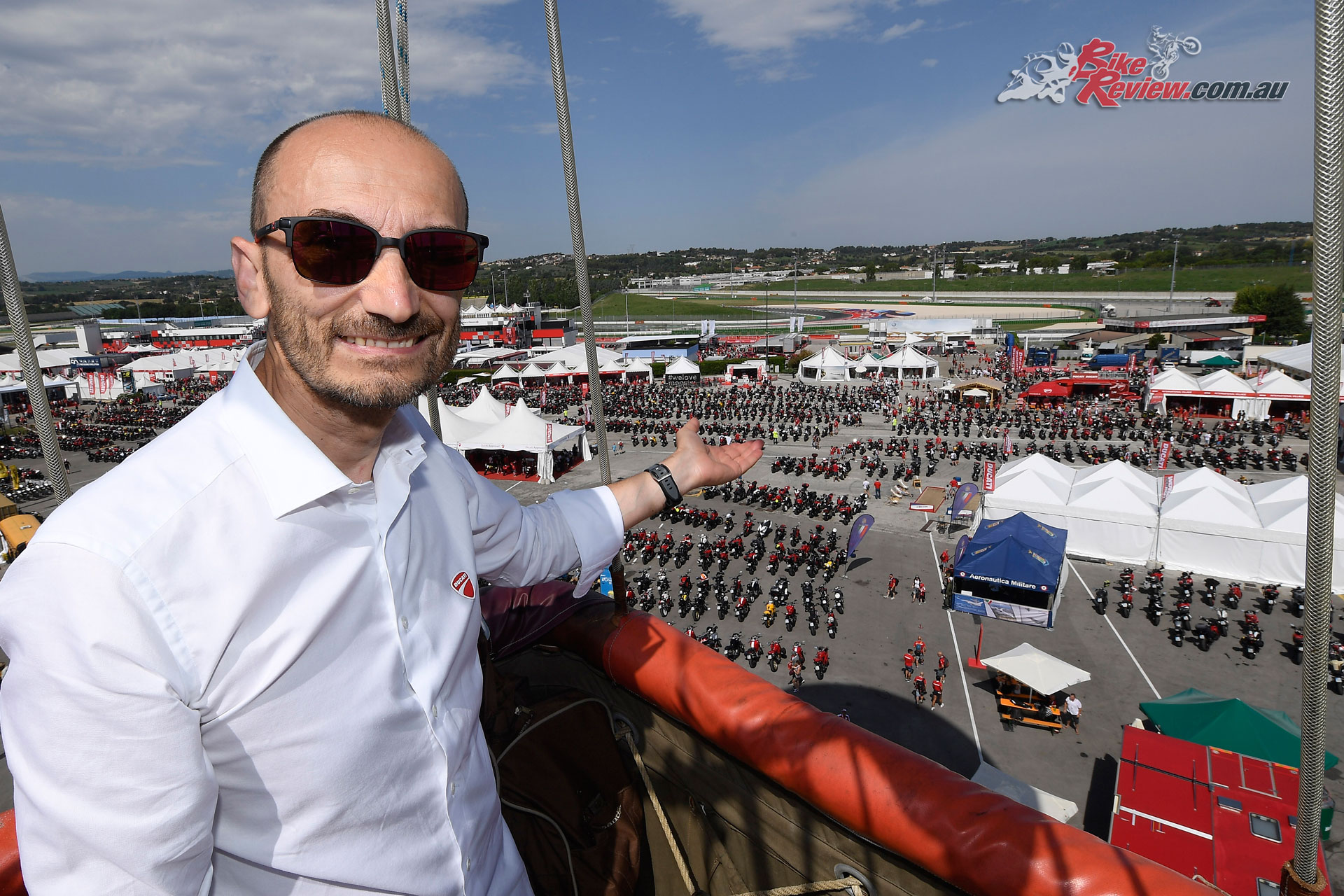 Saturday night the music of Radio Deejay and the Street Clerks band provided an entertaining and engaging evening on the stage set up in Piazzale Roma in Riccione. Claudio Domenicali and the Ducati riders greeted all the Ducatisti, receiving in turn tributes of affection and esteem from the large audience. The stage was then left to Nina Zilli and her music, another gift for the participants of World Ducati Week and for the large audience in Riccione, all engaged in a weekend dedicated to “desmodromic sound”. 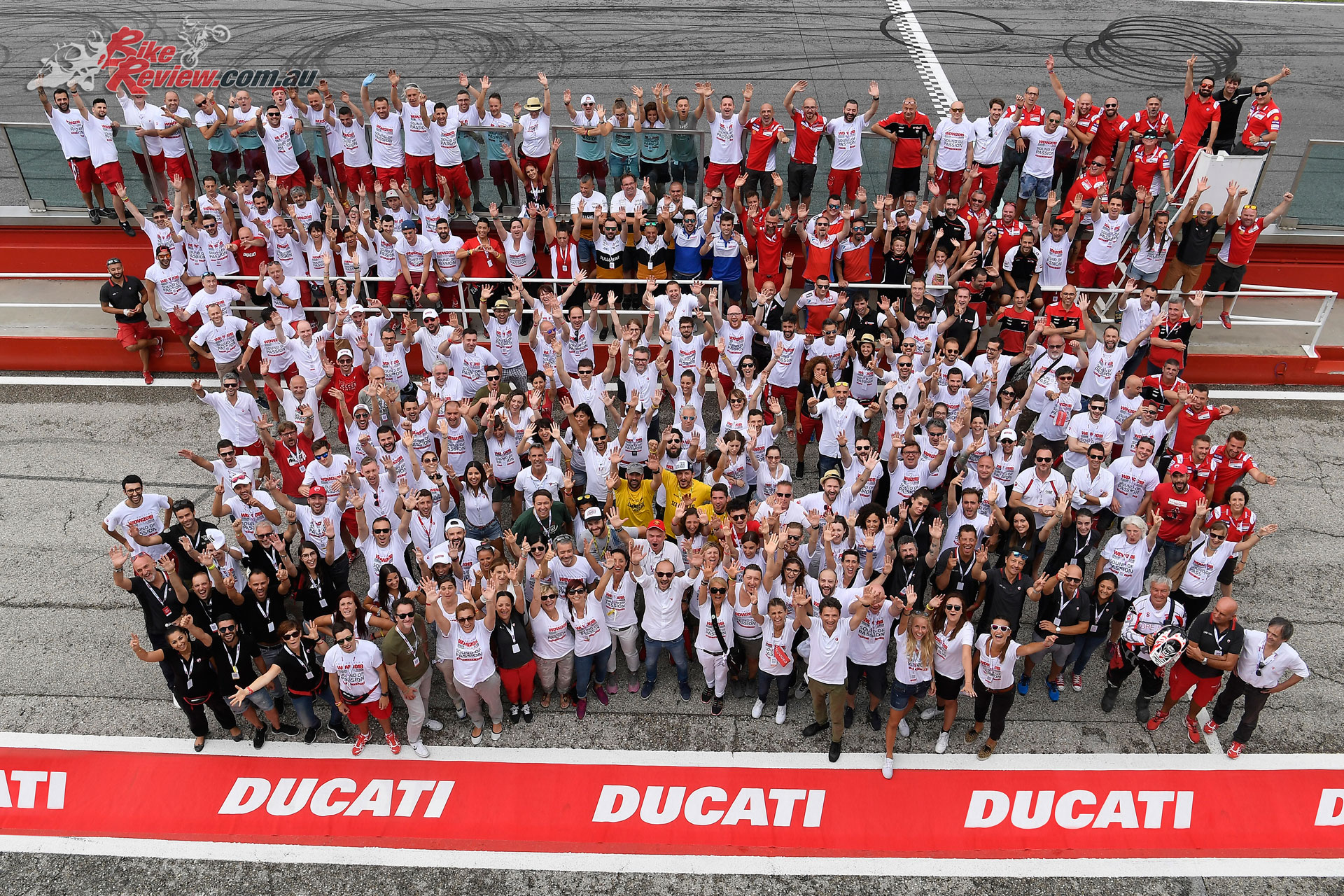 All Ducati employees were actively involved in planning the event, and during the weekend of the WDW, which this year included more than 250 people from the company (managers, engineers, technicians and employees) as part of the organisational staff. 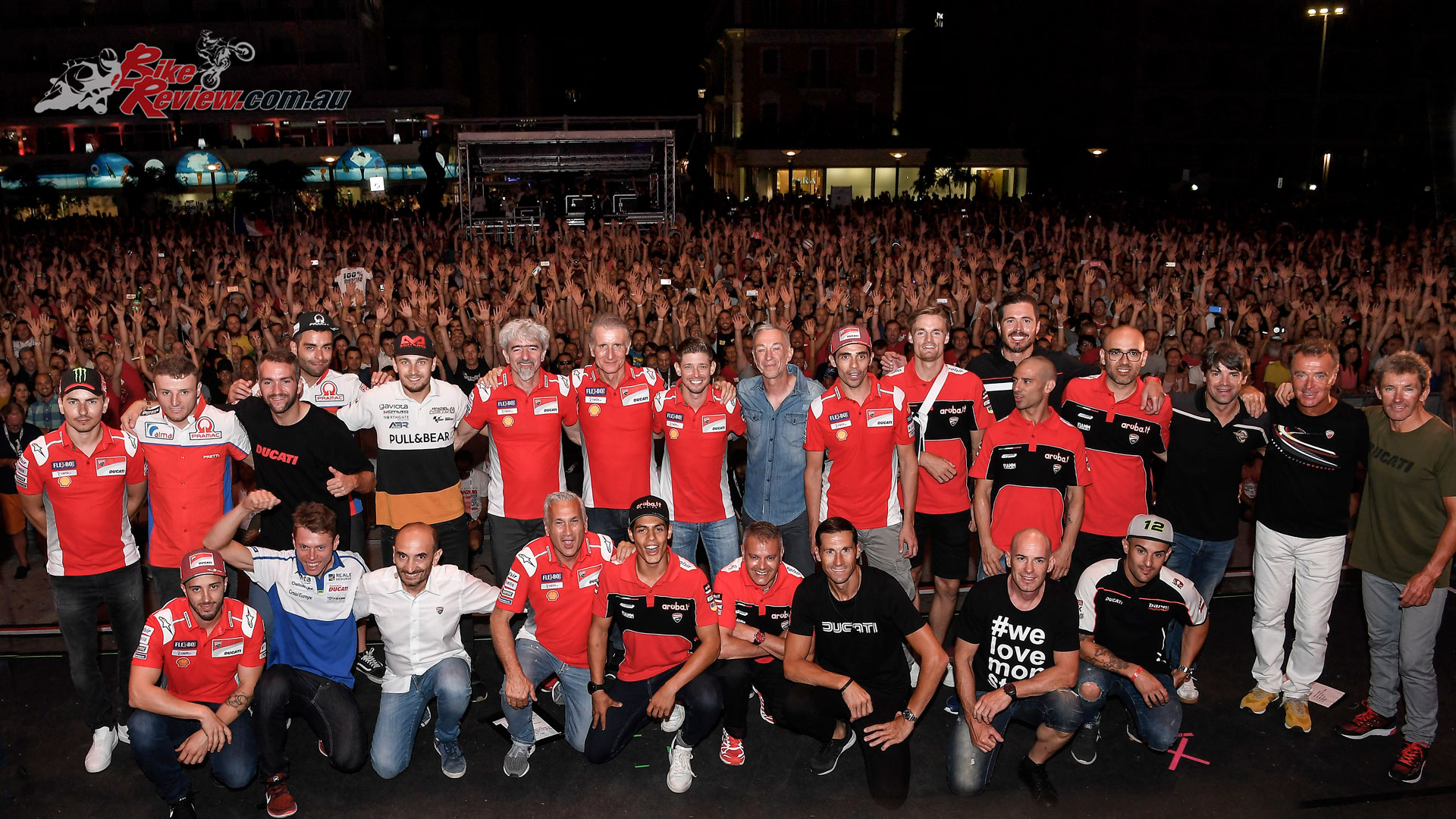 Ducati was able to count on the collaboration of the Municipality of Misano, as well as the Municipalities of Rimini, Cattolica and Riccione, not to mention the government of the Republic of San Marino, which organised and supported the evening events. Last, but certainly not least given its key role, the Marco Simoncelli Misano World Circuit which has hosted all editions of the WDW right from the start. 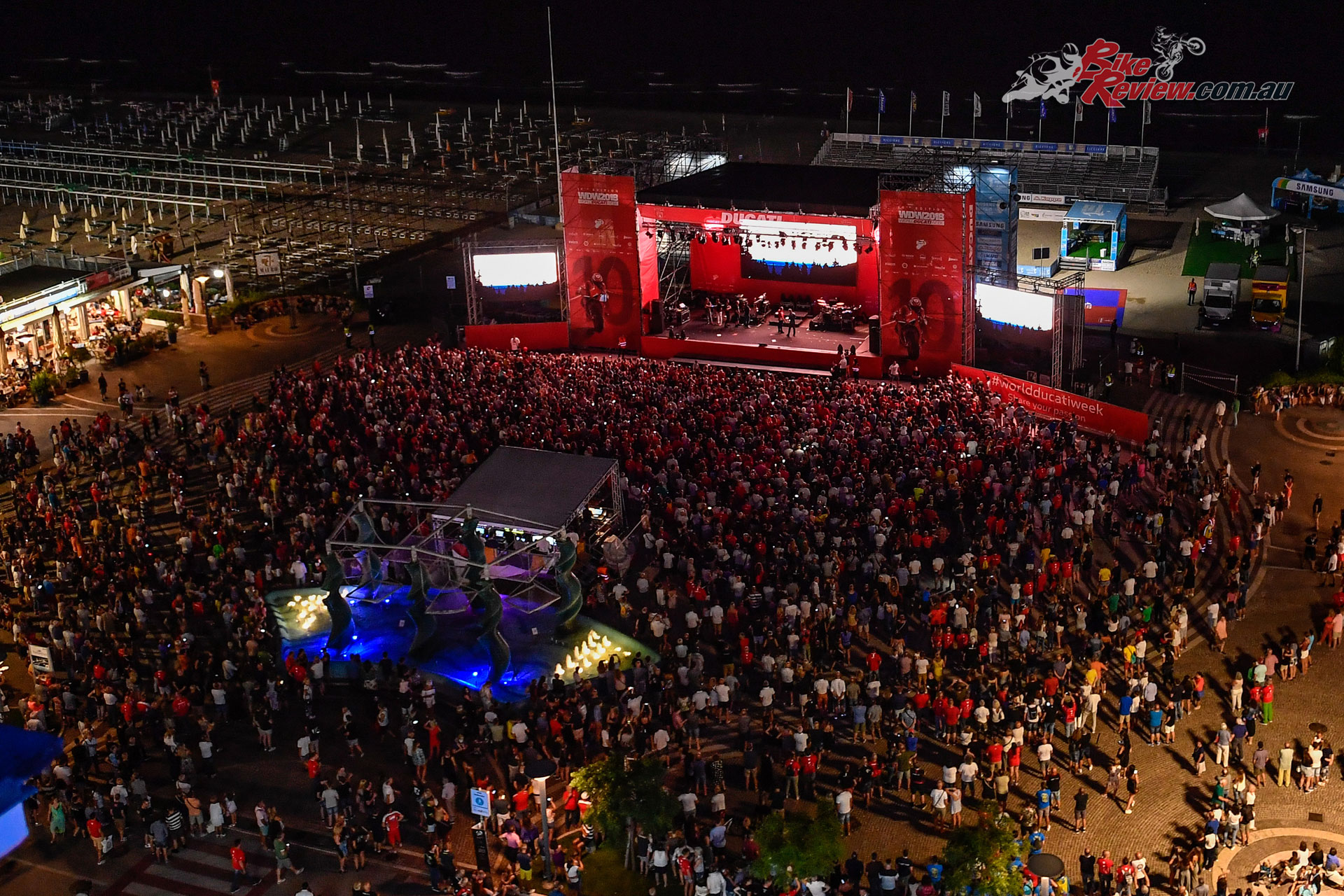 These are the numbers of WDW2018 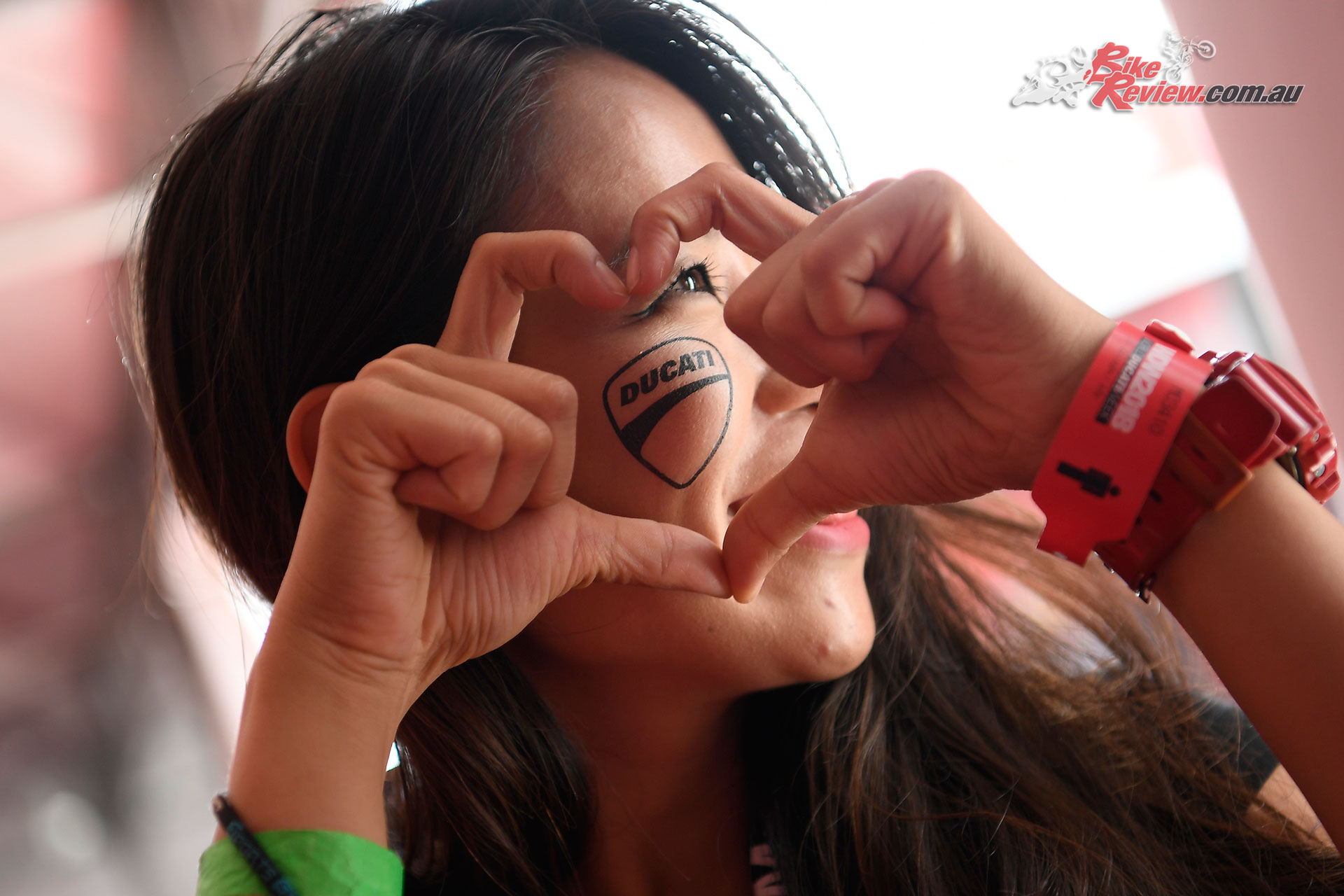