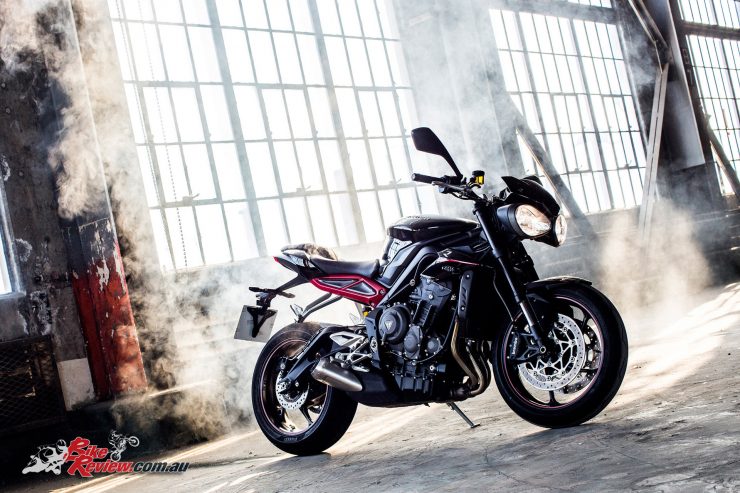 “The most explosive, agile and intuitive performance street motorcycles Triumph has ever made.” Claims Triumph when it comes to the 2017 Street Triple model line-up, which boasts three significantly different variants. 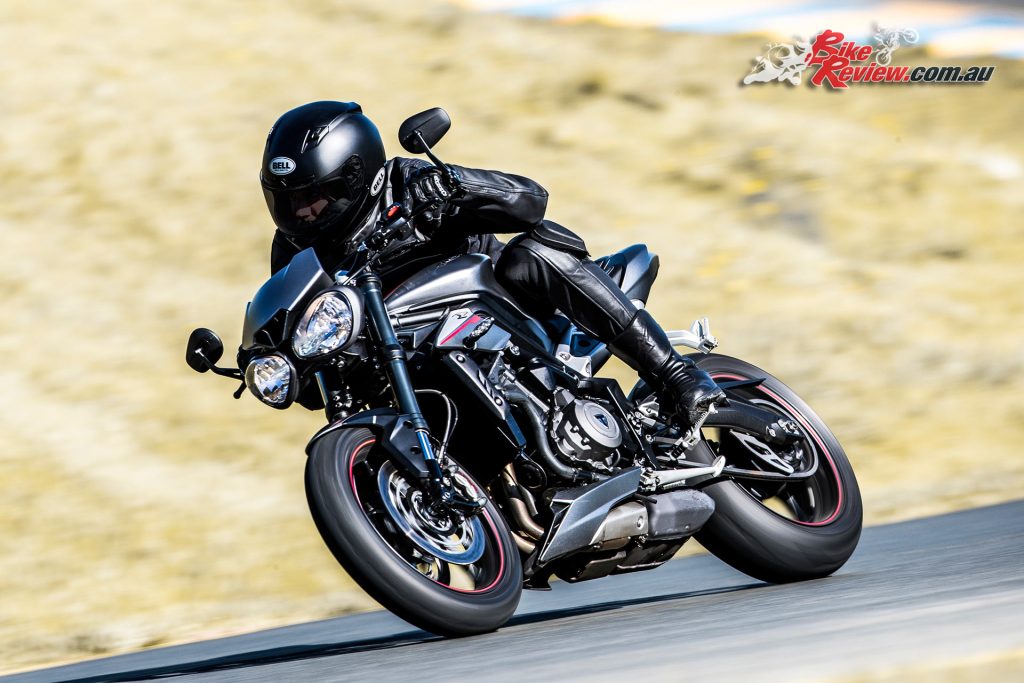 In 2007 Triumph launched the game changing original Street Triple, light, fast, fun, agile and stylish. With its thrilling triple engine, aggressive looks and intuitive handling it set the benchmark, redefined the roadster market and went on to become a favourite for riders worldwide.

Today with the launch of the all-new 2017 Street Triple family Triumph have torn up the rule book up all over again – with the most explosive, exhilarating, agile and intuitive performance street motorcycles the brand has ever made. 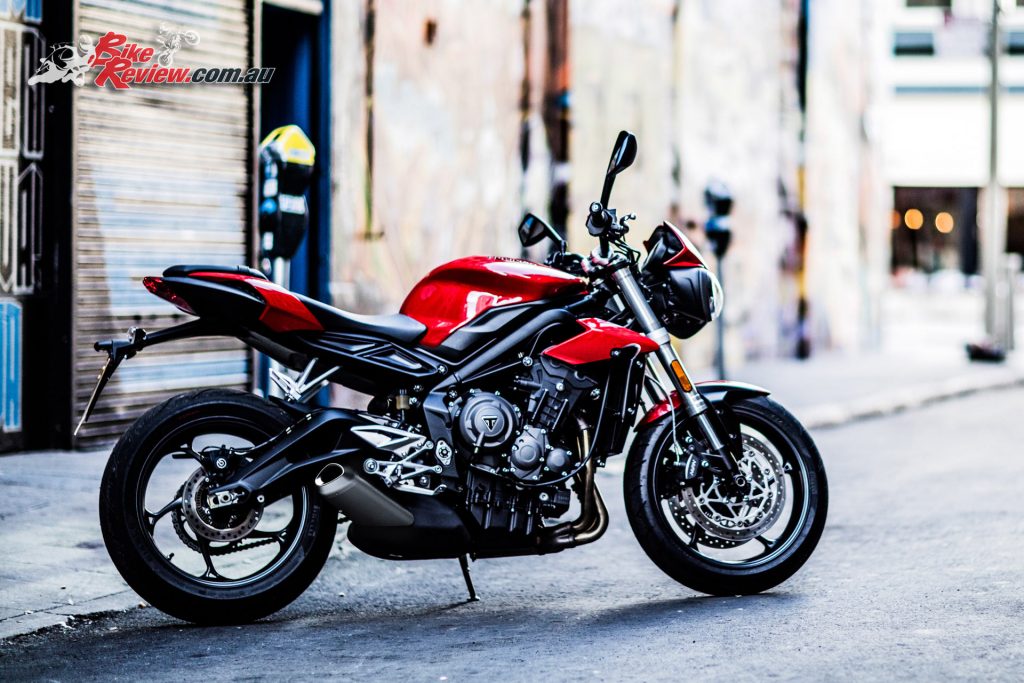 With three distinct all new options, a race bred new 765cc engine with three levels of power and torque, new state of the art technology, the highest ever level of suspension, brakes and tyres, aggressive new looks and class leading weight – the Street Triple family sets a whole new benchmark. 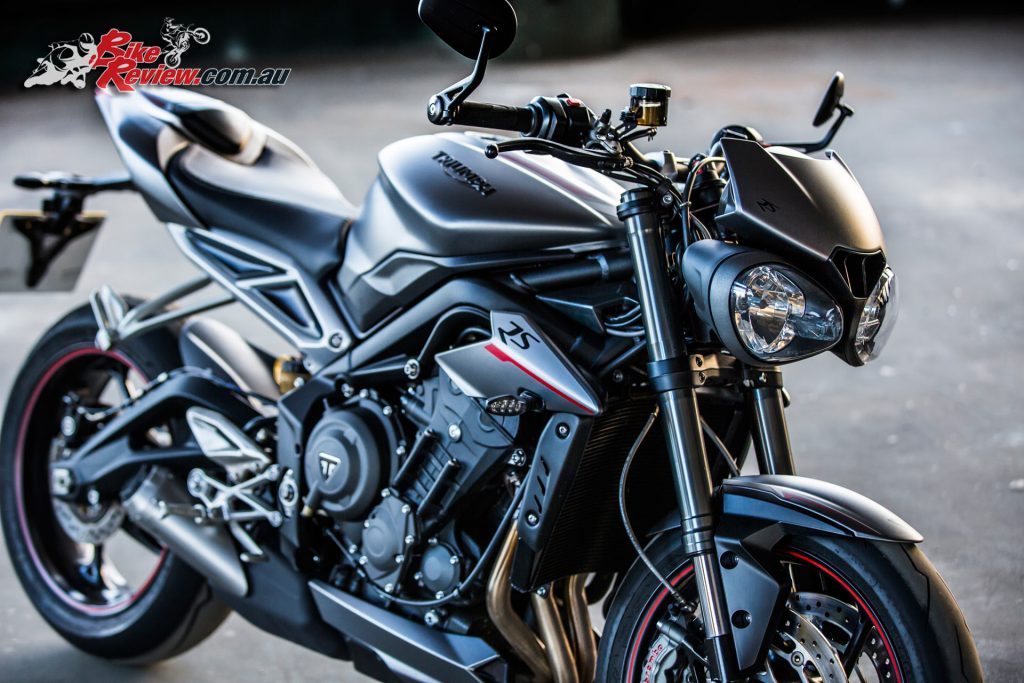 Developed from the celebrated race bred ‘Daytona’ engine, the new 765cc Street Triple engine delivers a major step up in power and torque. With more than 80 new parts including new crank, pistons and Nikasil plated aluminium barrels and an increased bore and stroke. The result is a significant advance in performance, particularly low-down and in the mid-range.

Each of the new models come with their own unique engine set-up, ECU and tune, each tailored to deliver the character, power and performance best suited to the bike’s style of ride and rider. 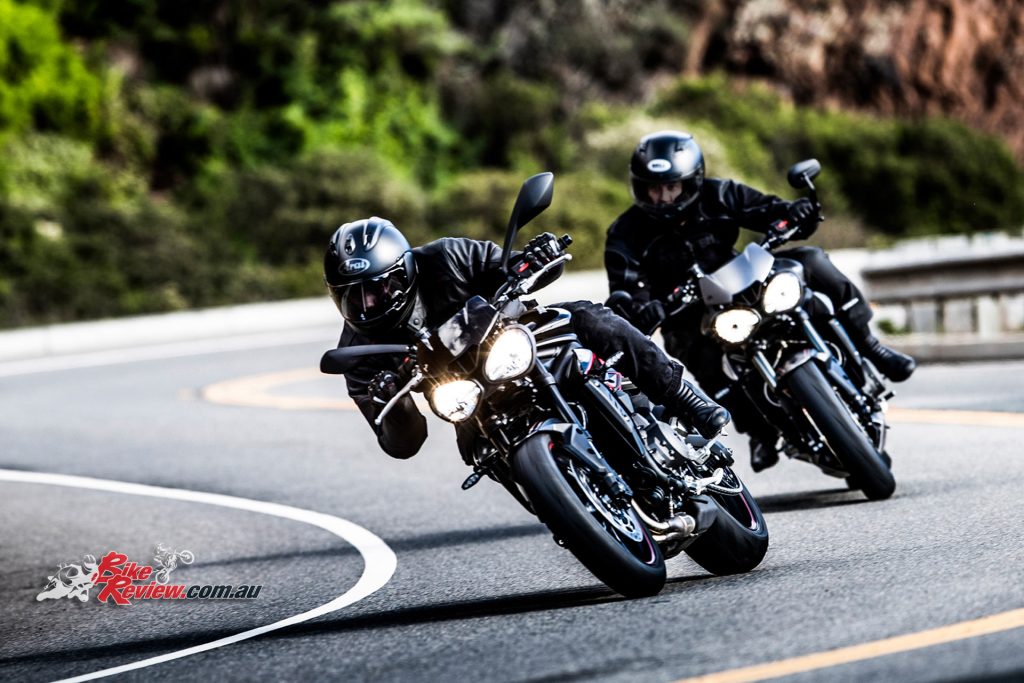 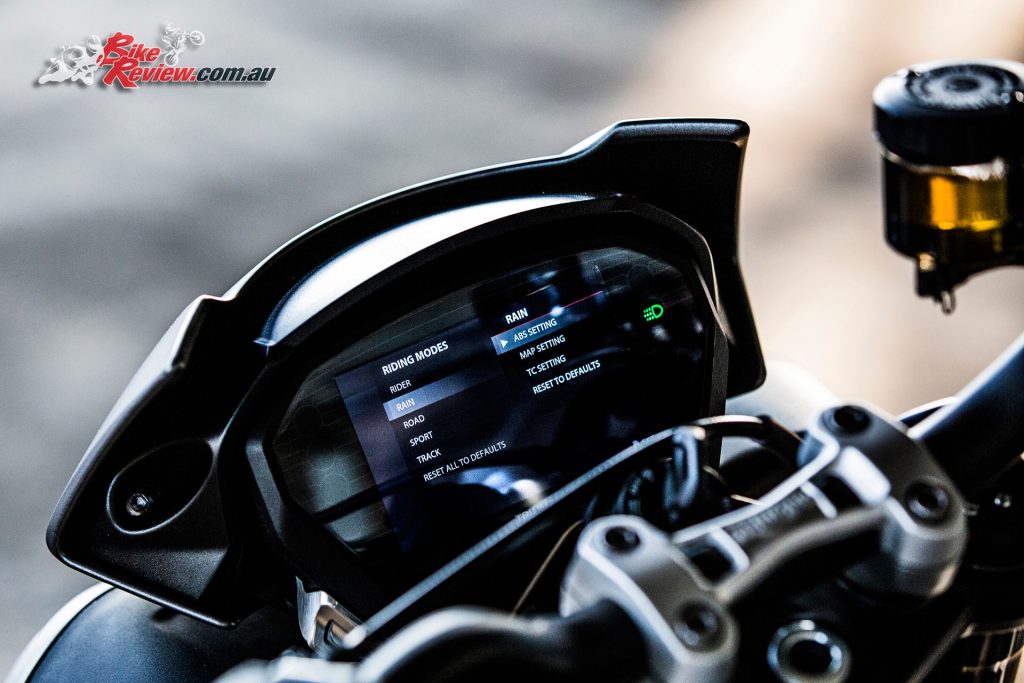 There are riding modes on all models to help the rider better harness the increased power and torque in every riding condition. A richer sound track, from a lighter, free flowing exhaust and revised airbox delivers an intoxicating and more distinctive induction howl.

Stronger than ever acceleration and slicker gear changes are achieved through a combination of revised gearbox geometry and shorter 1st and 2nd gear ratios. In addition, on the R and RS models, a new slip and assist clutch set up delivers lighter clutch action and reduced lever effort for more control and riding comfort. 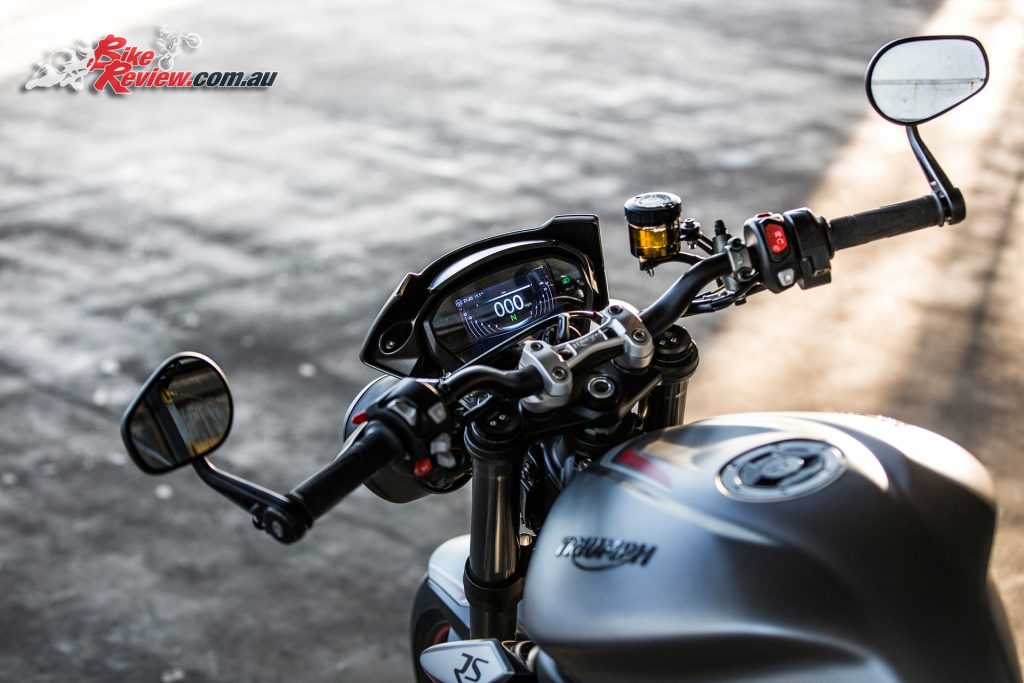 The new Street Triple line up also represents a major evolution in state of the art rider focussed technology for maximum control and safety.

Ride-by-wire For a crisper, more precise and more accurate throttle response, with improved on/off throttle transition. Enabling different throttle maps, which combined with the ABS and traction control settings give up to 5 riding modes. 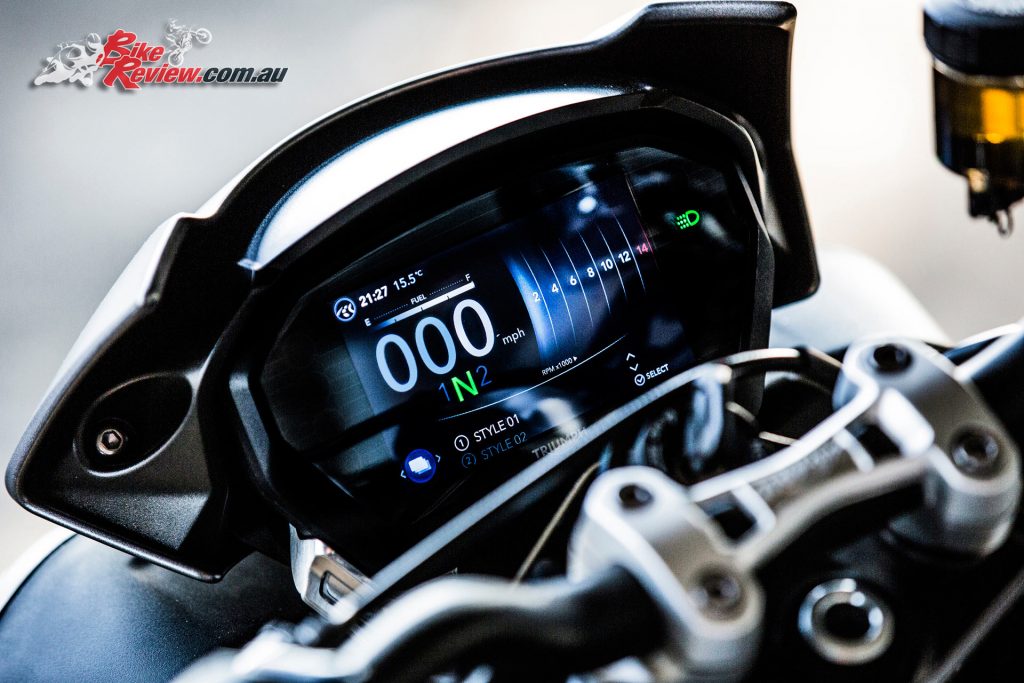 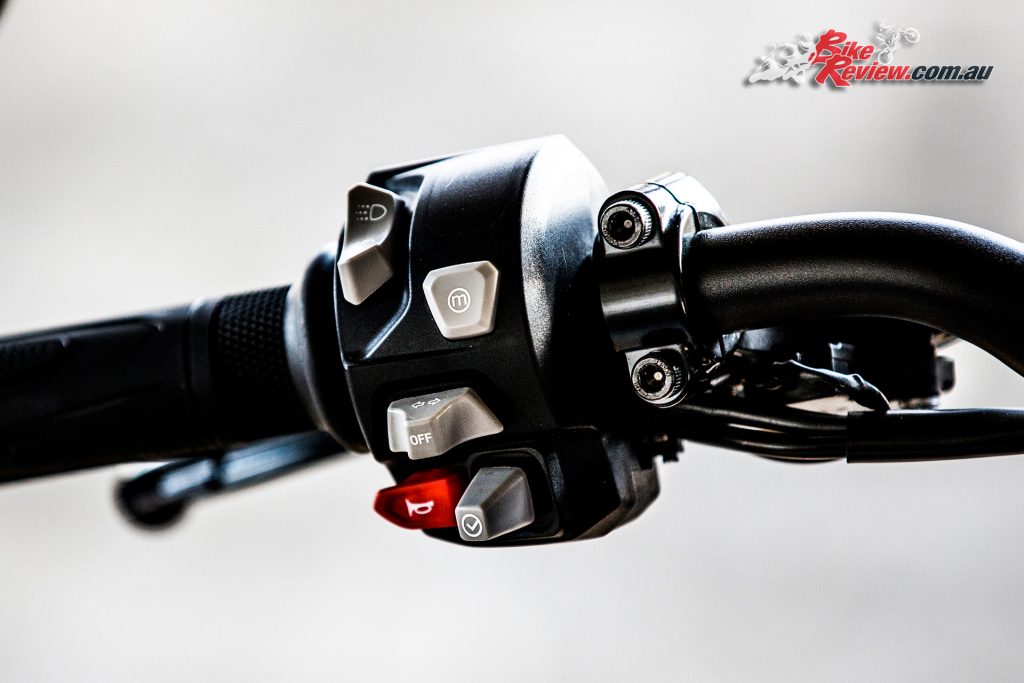 The Ride-by-wire offers a crisper, more precise and more accurate throttle response, with improved on/off throttle transition. Enabling different throttle maps, which combined with the ABS and traction control settings give up to 5 riding modes.

Riding modes are linked to the ride-by-wire system and all models have new riding modes, which adjust throttle response, ABS and traction control settings 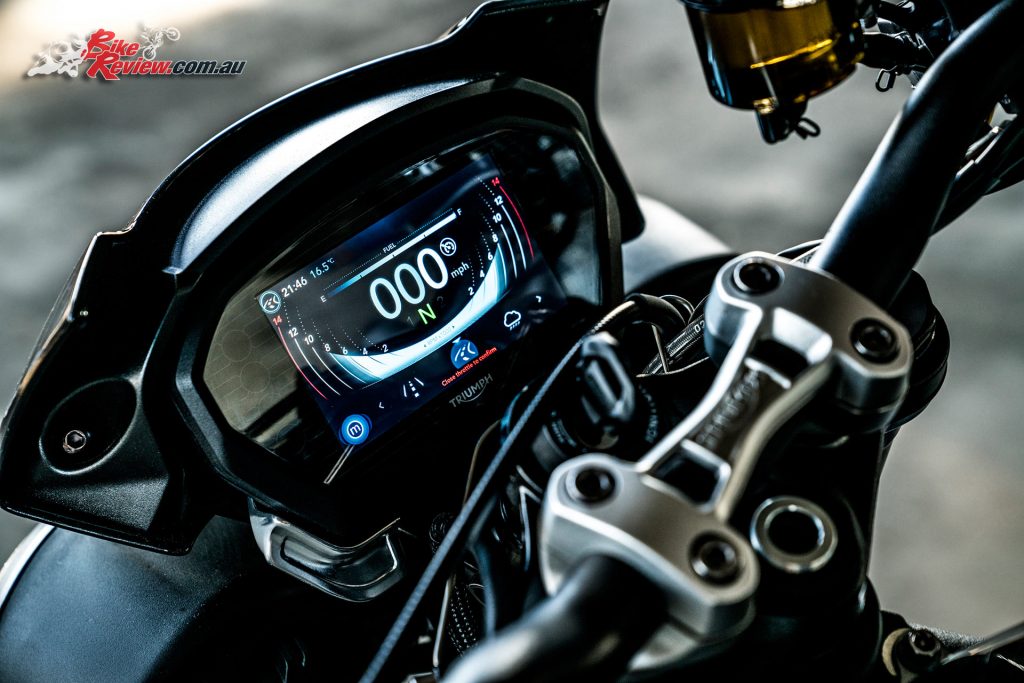 ABS is switchable on the Street Triple R and RS through the ‘rider programmable’ riding mode, which can be adjusted to suit (with road and track ABS settings) or can be turned off completely if desired. 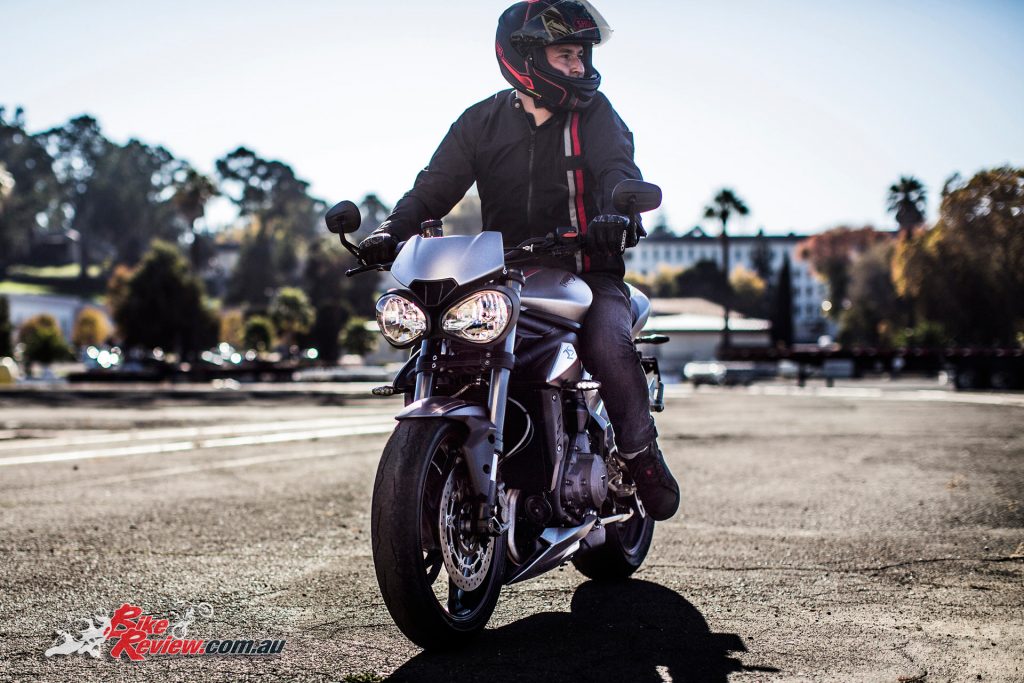 On the Street Triple R and RS traction control is managed through the ‘rider programmable’ riding mode, by selecting the desired traction control setting either ‘road’, ‘rain’, ‘track’ or ‘off’.

The new Street Triple RS is fitted with a quickshifter allowing for clutchless upshifts that are up to 2.5 times quicker than a skilled rider using a standard clutch upshift. This can be added as an accessory option on the Street Triple S and R.

The Street Triple R and RS featuring new distinctive LED Daytime Running Lights (DRL). These bring an eye catching new light profile that makes the bike more easy to see out on the road and a lower energy consumption for greater long term durability. The DRL is an amazing 28x brighter than the previous generation bulb sidelight. 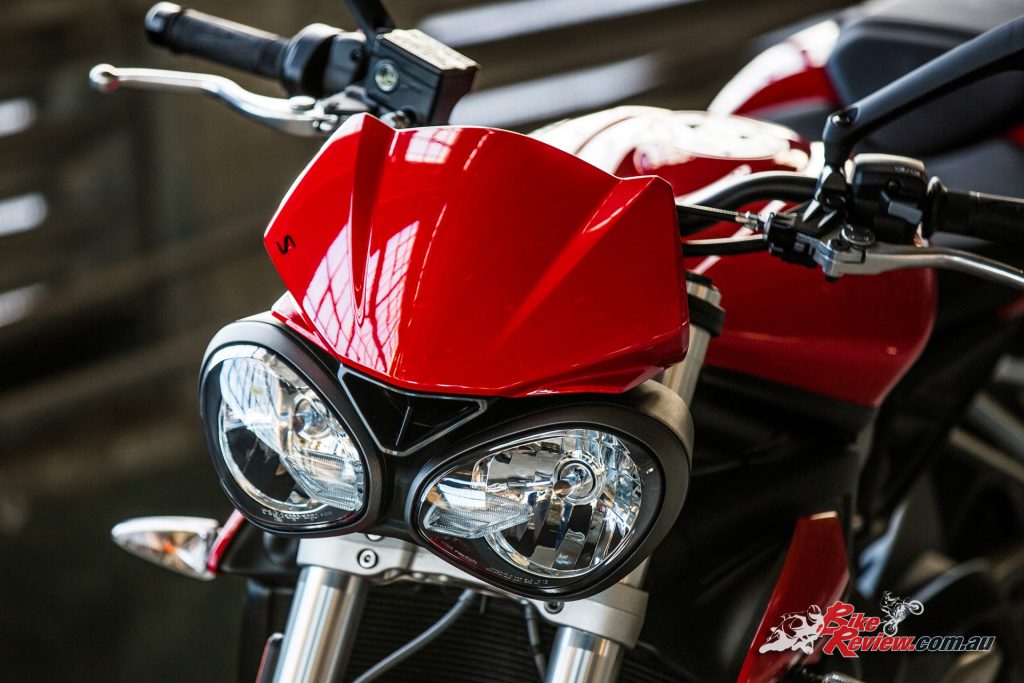 There are three different screen display styles to choose from, pre-set to the riding modes and changeable easily on the move. To ensure that the screen is readable in all weather and light conditions, each of the three styles can be selected with ‘High’ or ‘Low’ contrast. 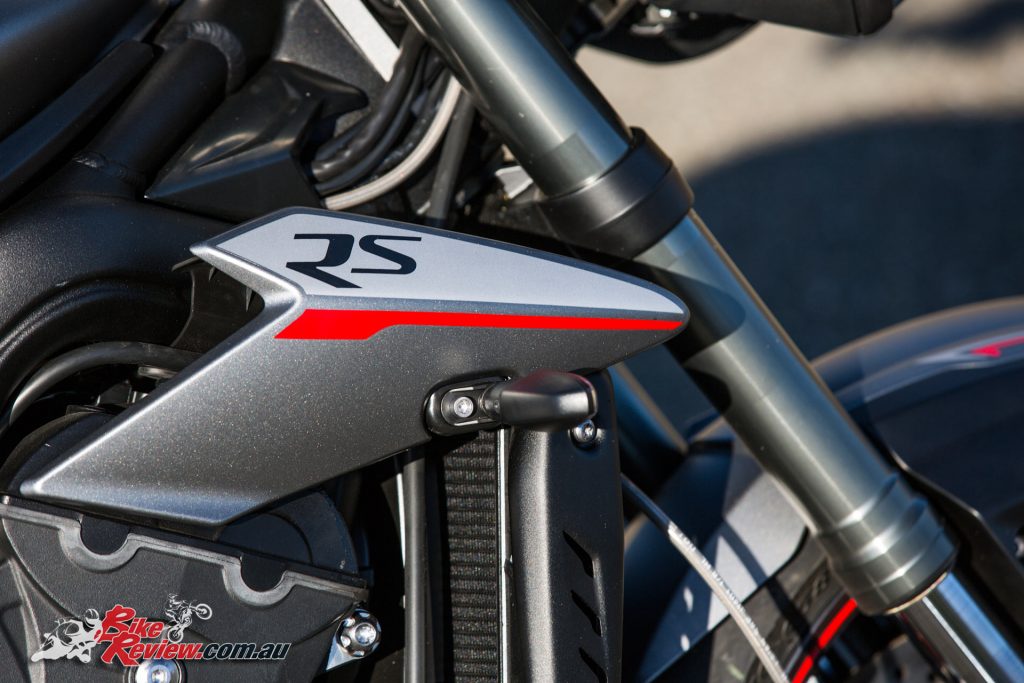 The Street Triple RS comes with an additional set of 3 more screen display styles. The second set presenting a more dynamic display theme and includes a lap timer that is exclusive to the ‘RS’.

On the Street Triple S there is a fully revised LCD instrument pack, as featured on the latest generation Speed Triple. This allows the rider to select the riding modes, on the move or at a standstill, and access key information from the on-board computer, including odometer, fuel gauge, trip meter and journey distance. 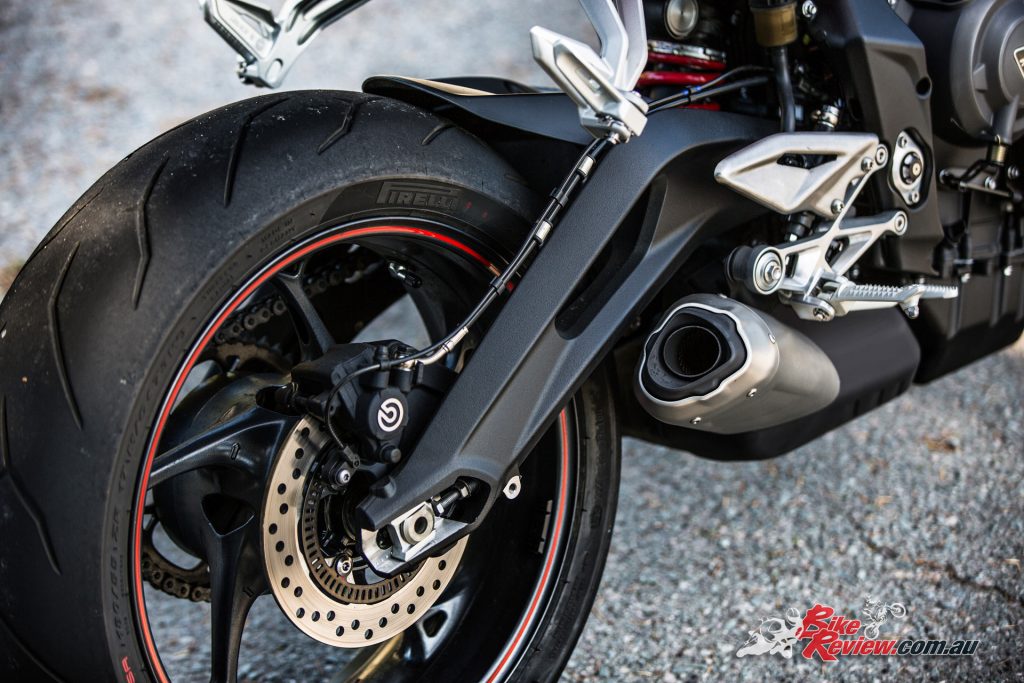 Leaner and meaner than ever the new Street Triple models are lighter than the previous generation, holding their position as the lightest bikes in class.

This weight reduction combined with the new higher power 765cc engine delivers an amazing power to weight ratio that is key to the game changing performance of the new ‘Streets’ delivering a truly explosive and agile ride.

An all-new gullwing rear swingarm has been specifically designed for the new Street Triple range, resulting in increased longitudinal torsional stiffness, combined with an engineered reduction in lateral stiffness. 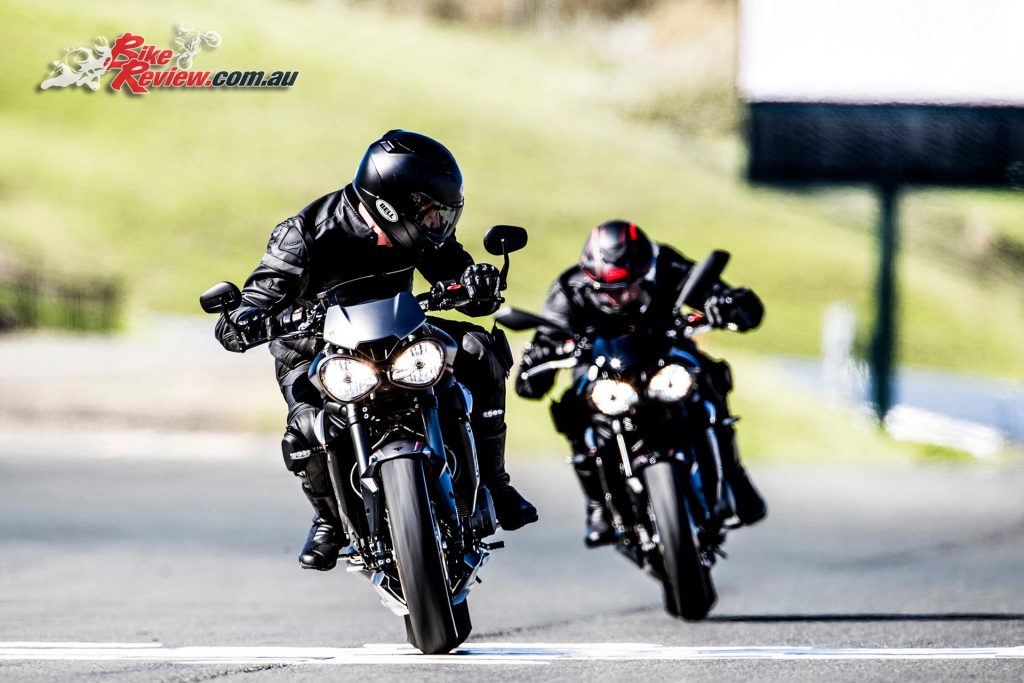 This maximises stability at the higher speeds achieved by the new Street Triple, for greater rider confidence, with an optimised swingarm pivot position providing more natural resistance to compression of the rear suspension unit under hard acceleration. This brings a tighter corner exit capability and a more precise chassis behaviour, which can be felt on both road and track. 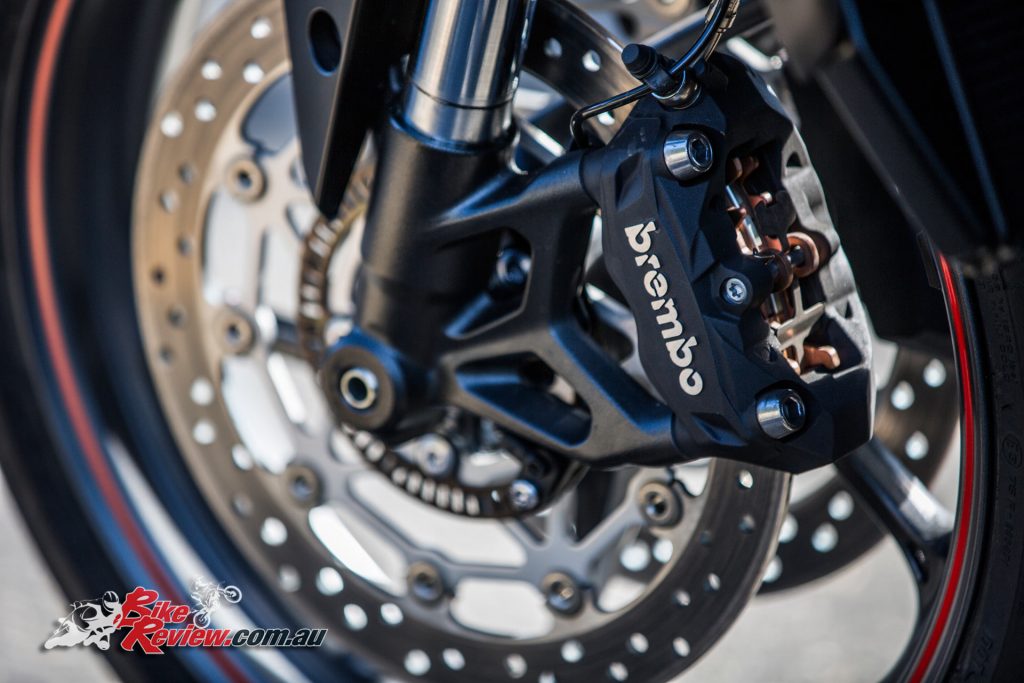 The Street Triple R has Brembo M4.32 4-piston radial monobloc calipers that deliver greatly improved stopping power over the previous Street Triple R and a Brembo single piston sliding caliper on the back. 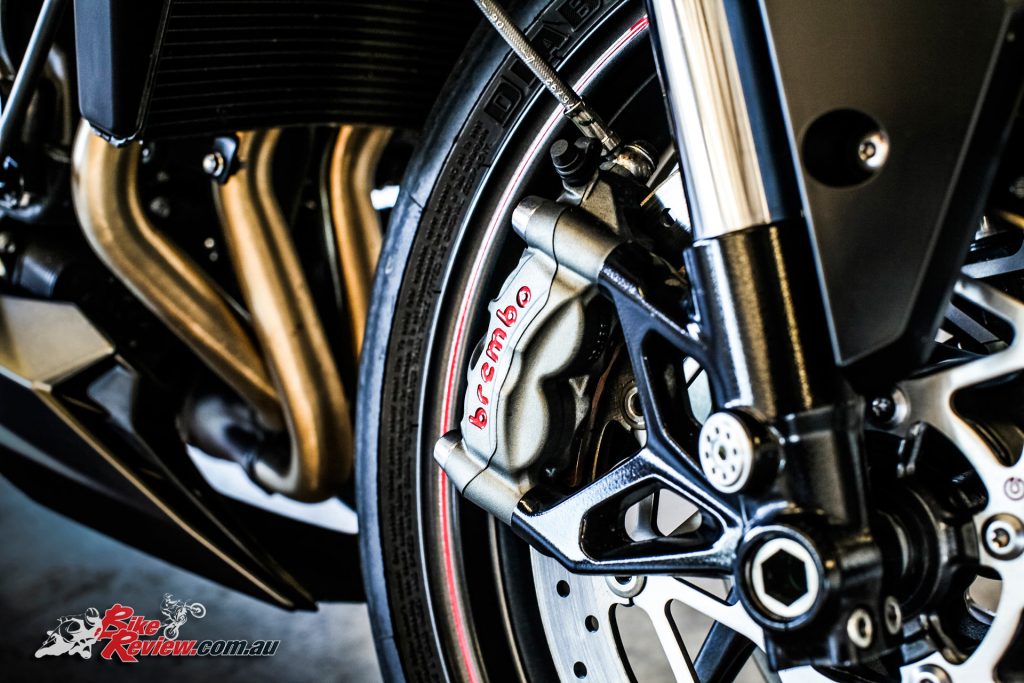 The Street Triple S and R models are fitted with premium Pirelli Diablo Rosso Corsa tyres which deliver sharp and precise handling as well as excellent stability and grip on the road. 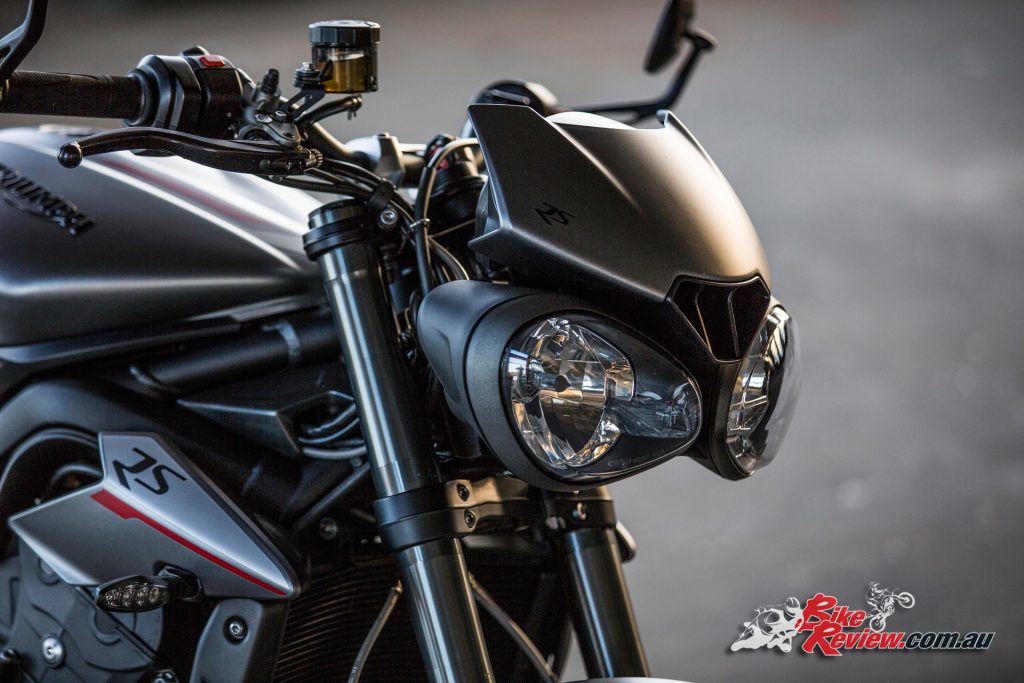 The new line-up all feature a significant styling evolution to deliver more attitude and a sharper more athletic poise, inspired by the ‘nose-down’ focussed attitude of the latest generation Speed Triples.

More contemporary and aggressive lines have been created with all new bodywork, flyscreen, radiator, cowls and new integrated air intake. In addition, the seat has been redesigned and restyled to deliver a sharper, sportier separate twin seat set-up without sacrificing rider or passenger comfort.

With an incredible attention to detail there is a higher level of finish across the entire motorcycle with many high quality details, including individual colour coded rear sub-frames for each model, re-designed rider heel guards and forged pillion footrest hangers. 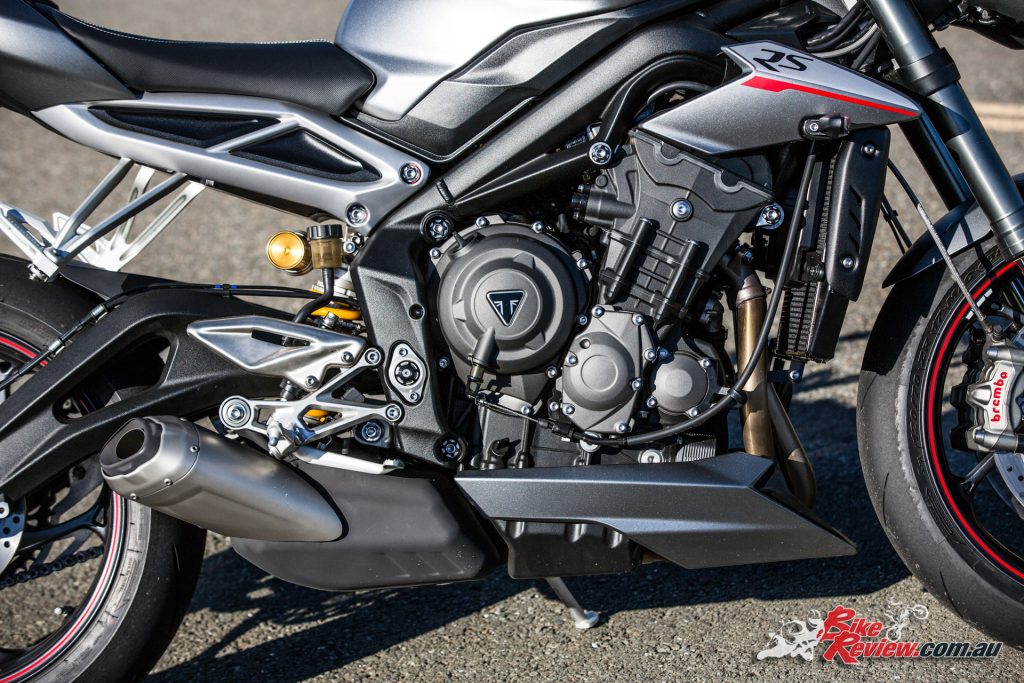 Street Triple S Built to deliver a thrilling, agile and addictive everyday ride. With its new street fighter looks, the highest level of finish ever, lighter than its predecessor with higher spec brakes, tyres, suspension and all-new gullwing swingarm.

Street Triple RS The most explosive and adrenaline charged Street Triple ever, built to be at home on the track, and a weapon on the road. 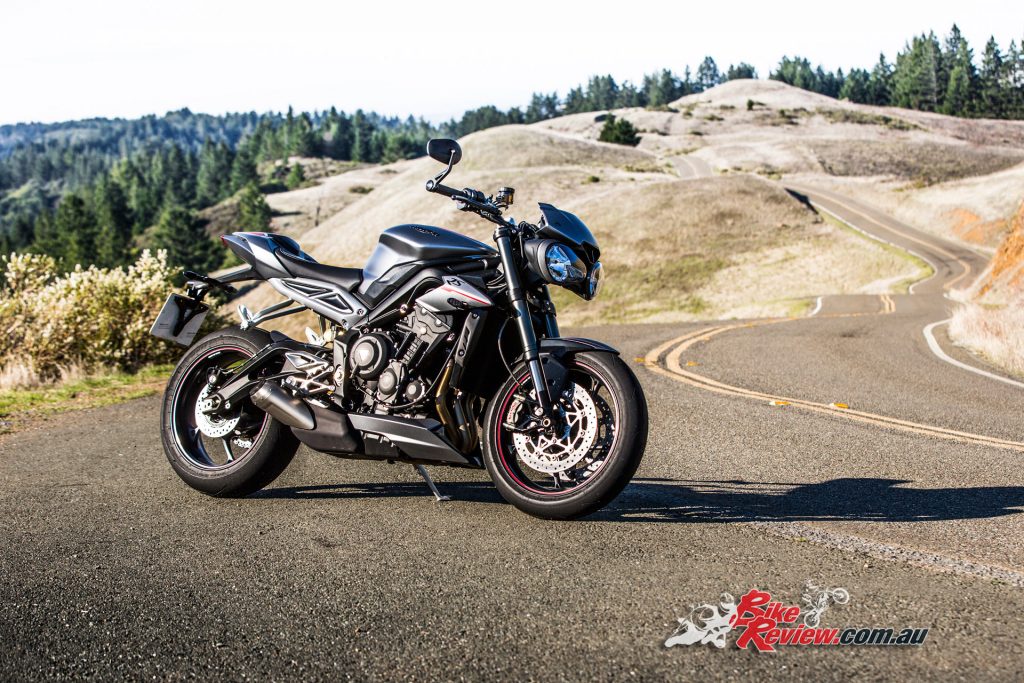 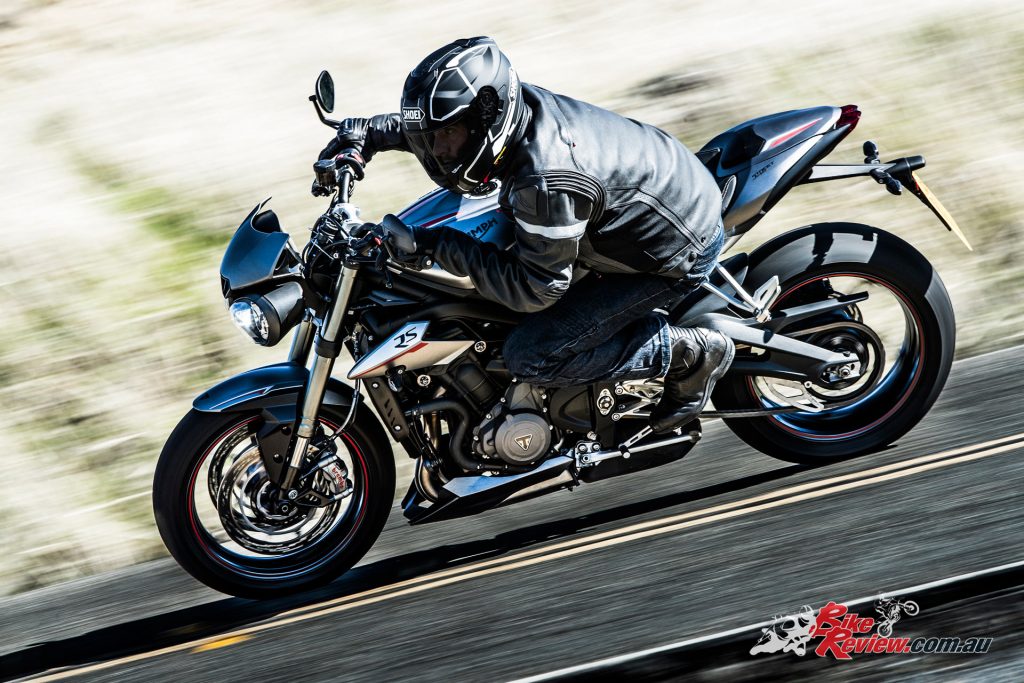 With over 60 accessories available, selectable via Triumph’s online configurator, riders can take their Street Triple to an even higher level of specification and capability with accessories including Arrow exhausts*, colour coded seat cowl and swing arm protector kit.

*Availability of Arrow silencers is governed by local market legislation – please check with your Triumph market representative for availability.