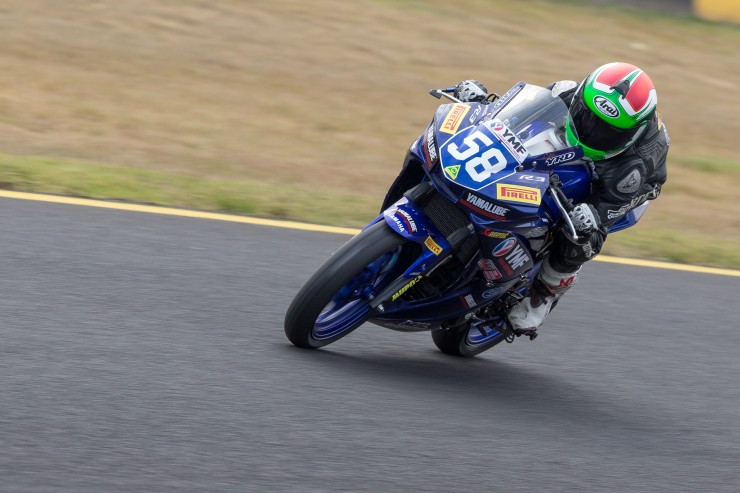 Callum Alderson had plenty of reason to celebrate yesterday, battling across two action packed races to wrap up Round 3 of the Yamaha Motor Finance Australian Superbike Championship presented by Motul Pirell on the top step of the YMF R3 Cup podium.

After a brief warm up session it’s was straight into racing for the R3 Cup competitors at SMP, and it was Alderson who got the jump off the start, and moved into the race two lead. Hunter Ford, Ty Lynch, Aiden Hayes and Mitch Levy followed closely behind to round out the top five. 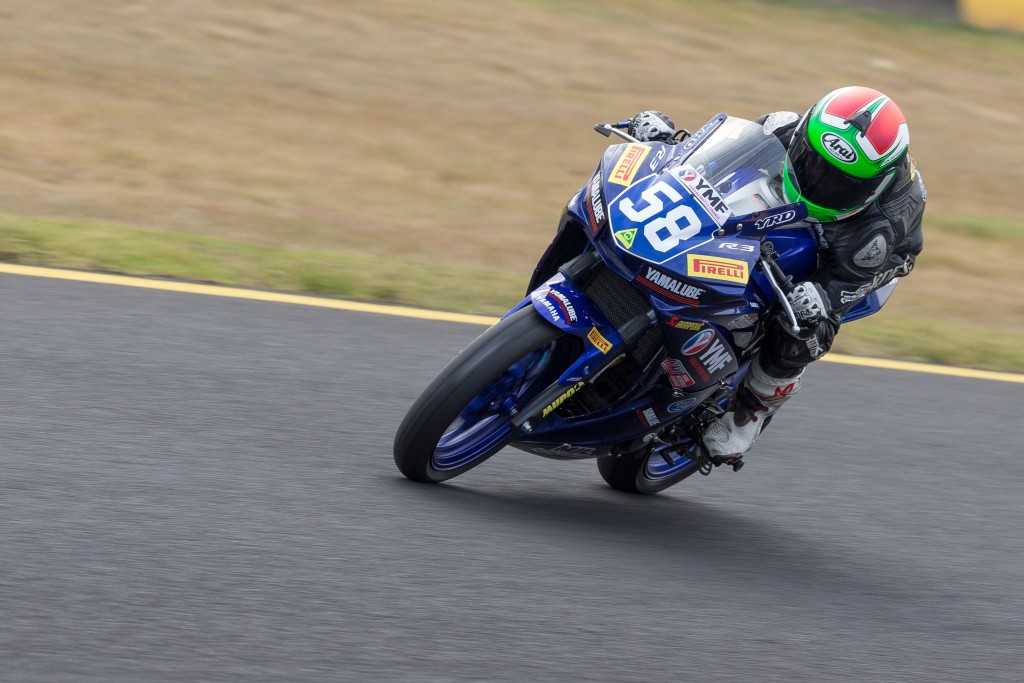 But before one lap had even been completed, a crash at turn nine forced the race to be red-flagged.

When the R3 Cup machines lined up on the grid for a second time, the race was reduced to six laps, but it didn’t deter the likes of Alderson, who after a brief battle with Yamaha mounted Levy, took control of the race once again.

By the second lap Alderson made an ever so slight gap on second place holder Levy, and from there the battle for second and third positions heated up. Ford making the move on Levy to snatch away second position going in to turn one on lap three.

With Ford on a charge the Ford Brothers Racing rider then set his sights on race leader Alderson, and it wasn’t long before Ford made use of the the slip stream to make the pass for first position.

Despite Ford looking strong out in front, Alderson and Levy continued to apply the pressure, but it was Alderson who proved that he had the pace once again, over taking Ford for the lead with only three laps remaining.

In the closing stages, the top six had almost a 25 second lead on the remainder of the YMF R3 Cup field, and with a flash of the last lap board, Alderson and Ford were once again neck in neck.

However, when the chequered flag flew, Alderson held on to take the race two victory, while Ford and Levy finished in second and third places respectively.

With rain falling in the early afternoon yesterday, the YMF R3 Cup competitors were forced to prepared their bikes for a wet track, and with time constraints also against them, the third race was reduced to six laps.

When race three got underway, the battle for the lead was between Alderson and Hayes, as the pair managed the wet conditions.

By the half way point in the race, Alderson remained out in front, followed by Hayes in second place. With only marginal gaps developing in the field, there were limited changes, however with only two laps remaining on the board, Hayes crashed marking the end to his battle with Alderson.

Alderson was then in a lonely first place, and the battle then shifted to second and third positions between Lynch and Michael King, with under a second separating the pair.

And when the chequered flag flew for the final time for the YMF R3 Cup competitors, Alderson crossed the line undefeated, marking a positive weekend for the teenager.

With a successful weekend under his belt, Alderson walked away holding the overall trophy for Round 3 of the ASBK, and shared his thoughts on the win after being showered in champagne on the podium.

“The thought of being showered in champagne is probably not something a lot of people want, but after a great round like we have just had it’s awesome! Even if it means I have to go home sticky in the car for the eight-hour trip,” Alderson chuckled.

“The suspension along with the Yamaha bike were really great. The Pirelli tyres were working great out on track too especially with the tricky conditions.

“I am really happy with how we finished the round,” he concluded.

For a full list of results from Round 3 of the Yamaha Motor Finance Australian Superbike Championship presented by Motul Pirelli, head to www.computime.com.au