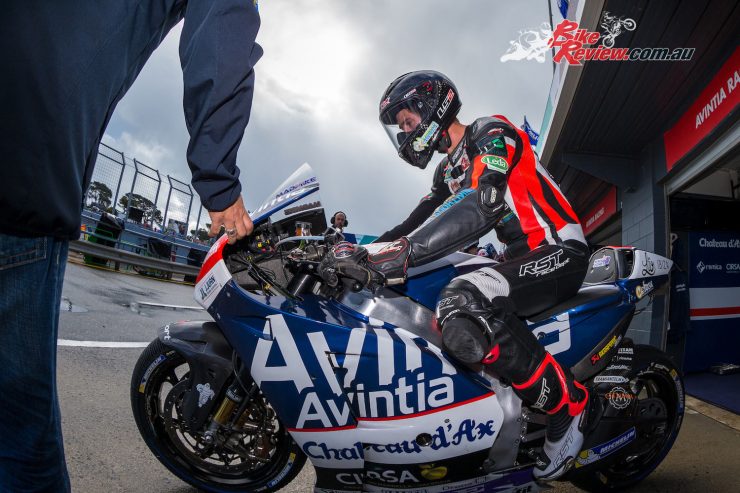 Aussie heroes perform in front of home crowd in qualifying

Some of Australia’s finest road racers shined in front of the Australian crowed at day two of the 2016 Michelin Australian Motorcycle Grand Prix throughout three premier classes, Moto GP, Moto 3 and Moto 2 in what were patchy and unpredictable conditions.

Each class had their final practice sessions this morning, making significant improvements with every lap. The day concluded with each rider cementing their grid positions ahead of racing tomorrow.

Moto 3 competitor Suus’ Matt Barton was more than equipped today to take on the patchy conditions in both his last free practice with the Moto 3 competitors, before it was in to a 40 –minute qualifying session early in the afternoon.

A wet practice session saw all 34 riders hit the track one last time including wild card Barton however, only completing three laps in the wet due to engine problems Barton finished in 34th position.

Unfortunately for Barton his engine problems continued on in to the qualifying session, with unpredictable weather conditions adding to the challenges. Barton producing a fastest time of 1 minute 45.537 seconds after riding around the issues.

Tomorrow will see Barton start from 34th position on the grid in the hope to stay with the pack and get in to the 1 minute 30’s as he shared.

“In qualifying it was just a very, very mixed session the sun was out and then just as we were pulling out of pit lane there was a downpour,” Barton shared.

“Not long after changing tyres the track started to dry again. The session was red flagged in the end and it was down to a five-minute dash which was basically the first dry time we have had on track this weekend.

“The engine just expired, just something inside of it. Nothing that could have been helped but it was just something we are going to have to investigate further.

“We have a second engine and we will slot that in there for tomorrow and go from there. I am feeling reasonably positive about tomorrow’s racing, and my goal here for the weekend is to get past the 1 minute 40’s,” he concluded. 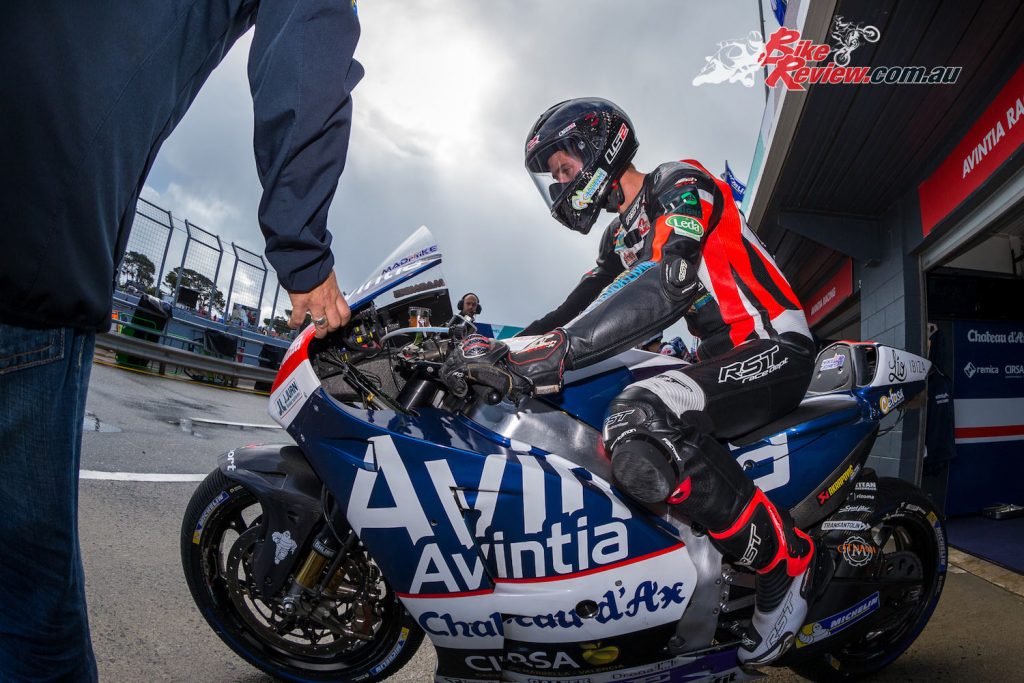 Australia’s Moto GP rookie Mike Jones put on another impressive performance today across two practice sessions and a qualifying session in front of a home crowed.

The 2015 Australian Superbike champ today had another two wet practice sessions before qualifying and managing to put in some quality time, Jones used these sessions to set up his bike and gain feeling before it was time to post his fastest lap.

In Free Practice 3 this morning Jones posted a quickest time of 1:36.756, while Free Practice 4 saw times drop as conditions got significantly worse forcing the practice session to be red flagged. When the session finally resumed Jones secured a time of 1:43.048 around Phillip Island Grand Prix circuit.

In Jones’ second ever qualifying session amongst the Moto GP stars the Aussie rider produced 8 laps on his Avintia Ducati machine, posting his fastest time on the sixth lap with a 1 minute 42.261 seconds. Jones cemented himself a 19th place start in tomorrow’s 27 lap race qualifying one position ahead of team mate Loris Baz in 20th.

The crowd was a sea of orange Jack Miller hats as the fellow Australian made his way around Phillip Island Grand Prix circuit. With not a single spot left on the fence during Moto GP qualifying Miller put on a performance in front of home crowd cementing a 5th place start in tomorrow’s race.

Australian Moto2 rider Remy Gardner was blessed with a dry qualifying session this afternoon allowing ample opportunity to post the fastest time and secure his grid position for tomorrow’s race. And that is exactly what Gardiner did cementing 23rd position on the grid with a lap time of 1 minute 35.804 seconds.