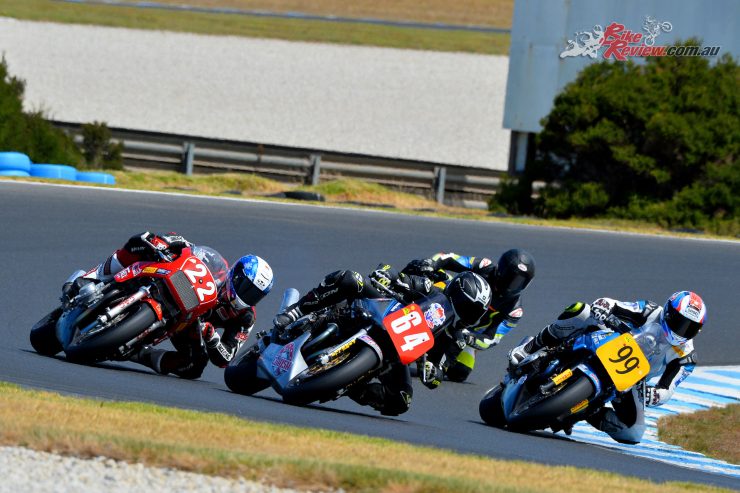 Team USA’s Josh Hayes went to bed last night convinced he could get an International Challenge win, but after finishing 15th in the morning’s race three his dream looked dashed. But the American did not give up, and showed why he is a four-time AMA Superbike champion with a resounding win in the fourth and final six-lapper at the Phillip Island Grand Prix circuit.

The outstanding Hayes on his first visit to the Australian high-speed circuit, led race four from the get-go and finished more than 4 seconds in front of Australia’s Steve Martin in 2nd , ahead of New Zealand’s Alex Phillis – with the final International Challenge podium representing all three nations competing. 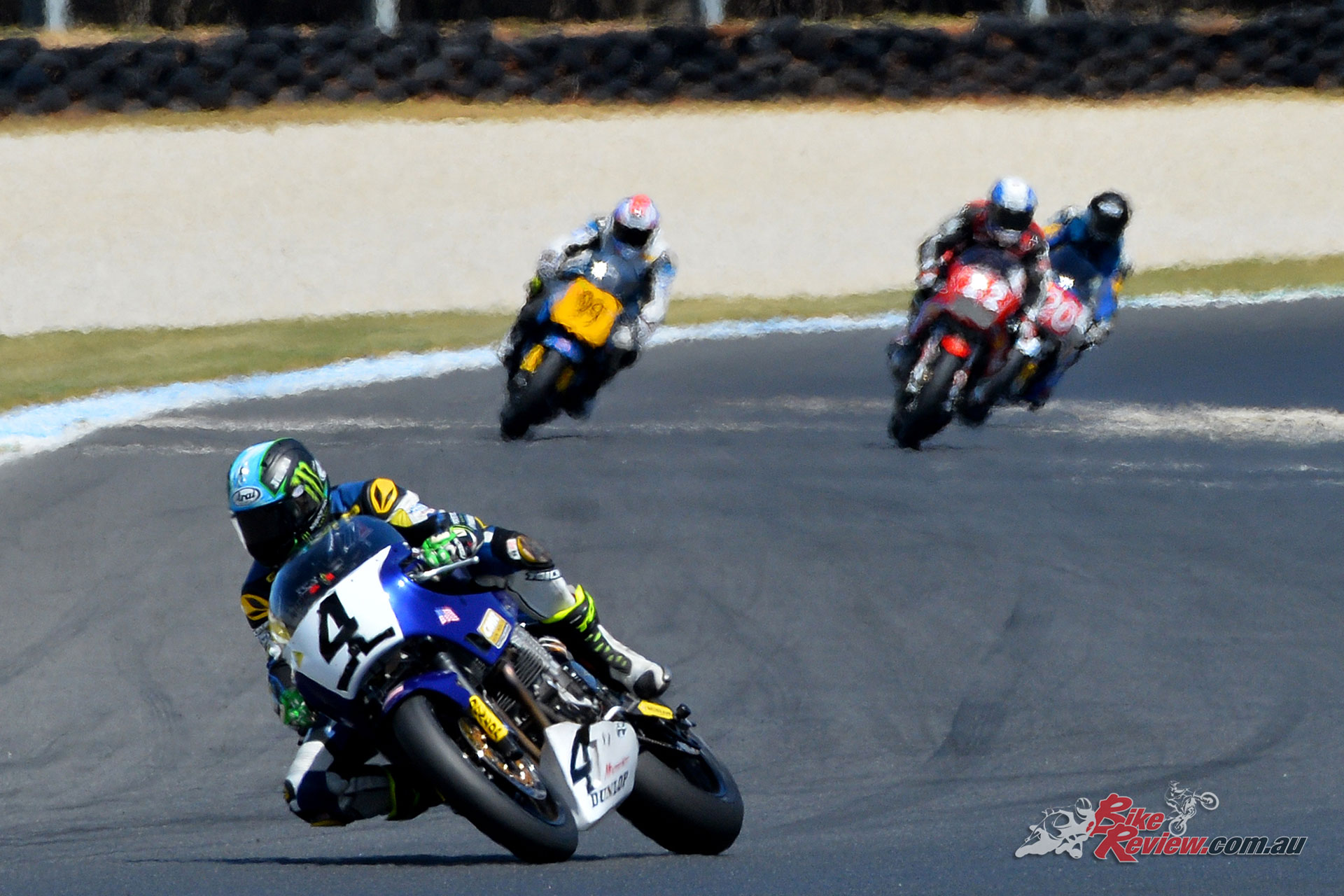 With three race wins to the Australians over the four six lap battles, the defending champions walk away with the title once again finishing on 676 points, ahead of America on 634 points and NZ on 460 points.    The International Challenge is the headline event if the Island Classic, presented by Visit Phillip Island, and one of the leading historic bike events in the world today.

In individual standings, it was experience over youth in the end, when Melbourne‘s Steve Martin – a former world endurance champion back in 2008 – took out the Ken Wootton Perpetual Trophy.

The race three winner took the title on 152 points, just two ahead of  26-year-old Novocastrian Aaron Morris who had his day on Saturday with a perfect score from two wins. Today was difficult for Morris with gear box problems pushing him back to 3rd in race three, and then for the final race, he rode with just three gears and only managed a 9th place. 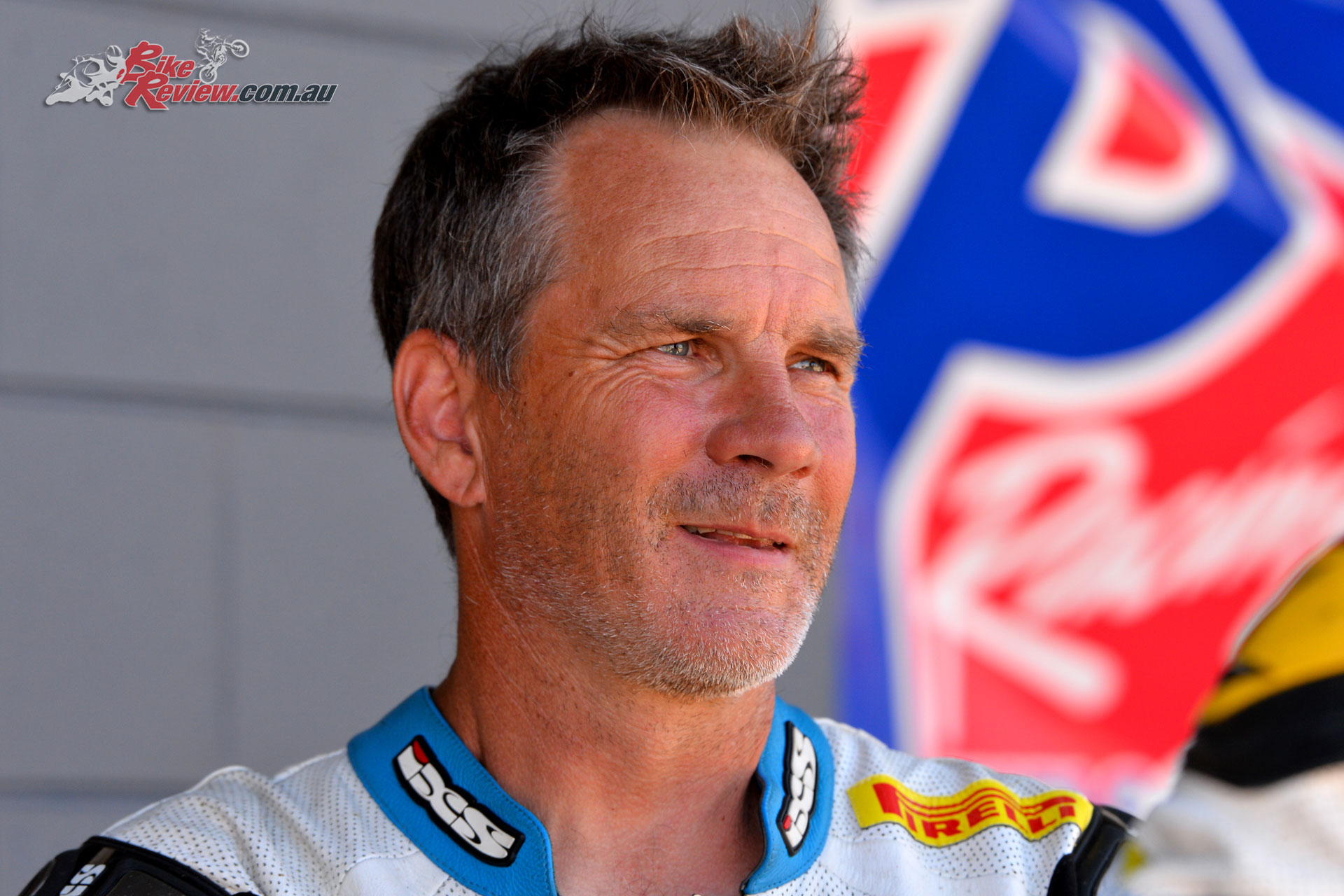 “It is unbelievable, I’ve won this (Ken Wootton Perpetual Trophy) before, but that’s a long long time ago now, so to win it today with guys like Josh Hayes, Jason Pridmore and all of the young chargers that we have got from Australia, it means a lot to me,” said Martin. “This game is all about a bit of luck, and I’ve had my bad luck in years gone by. Aaron was definitely very very fast all weekend. He should have won it if his bike had of stayed together, he had a little problem and it allowed me to sneak through.” 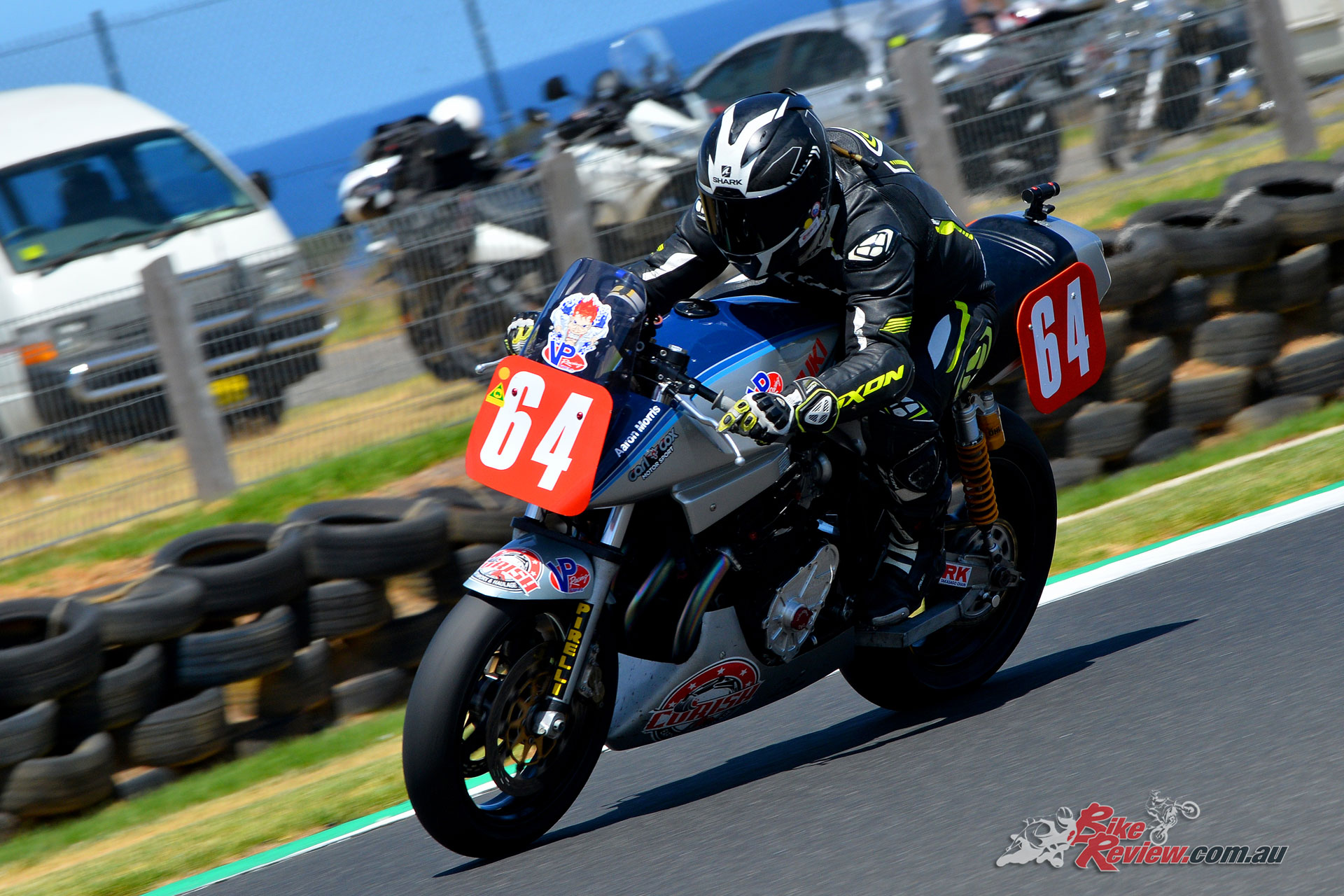 Hayes was elated after his race four win, but his excitement was tempered with concern for his team-mate Jason Pridmore, who had invited him to join the US squad –  but spent the last 36 hours in Melbourne’s Alfred Hospital with a broken leg after a nasty high-side in race one. 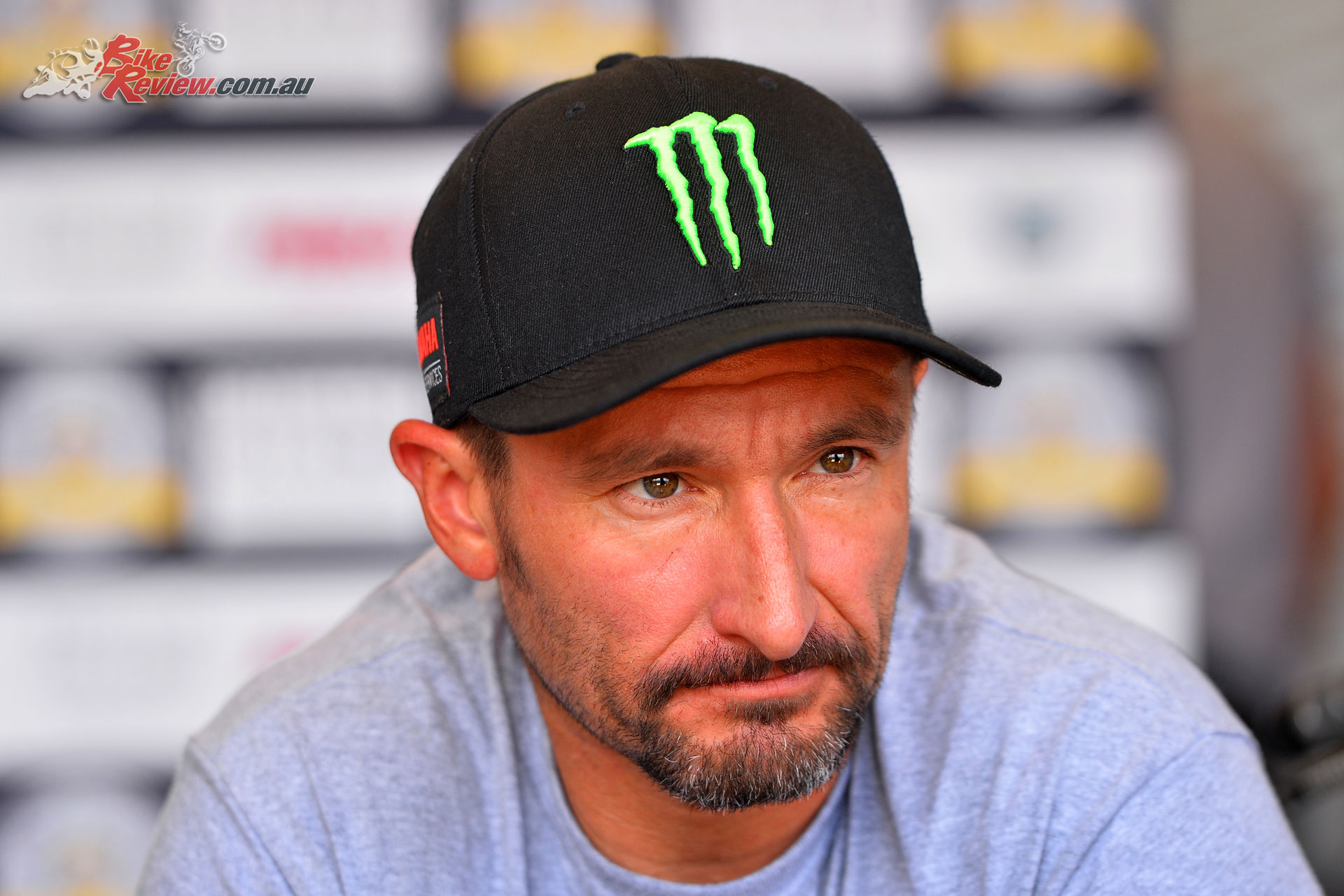 “I don’t necessarily feel like the first, I feel like Jason (Pridmore) was going to beat me to it, but with him being gone I am glad we were able to pull that off,” said Hayes of his race four win. “I’m glad he (Jason) invited me and I hope he’s proud of what we were able to accomplish. We had our snafu’s in the second two races and stole some hearts and actually that’s the first time the right bike had run proper all weekend. We’re a lot more pleased with where the bikes at and it gives us a lot of hope that we can make this thing a bit better in the future and that was just our first shot at it. Everyone has been real nice to me, I’m hoping I’ve done enough that Dave and the boys ask me to come back,” said a modest Hayes of his achievements in the Dave Crussell captained Team USA. 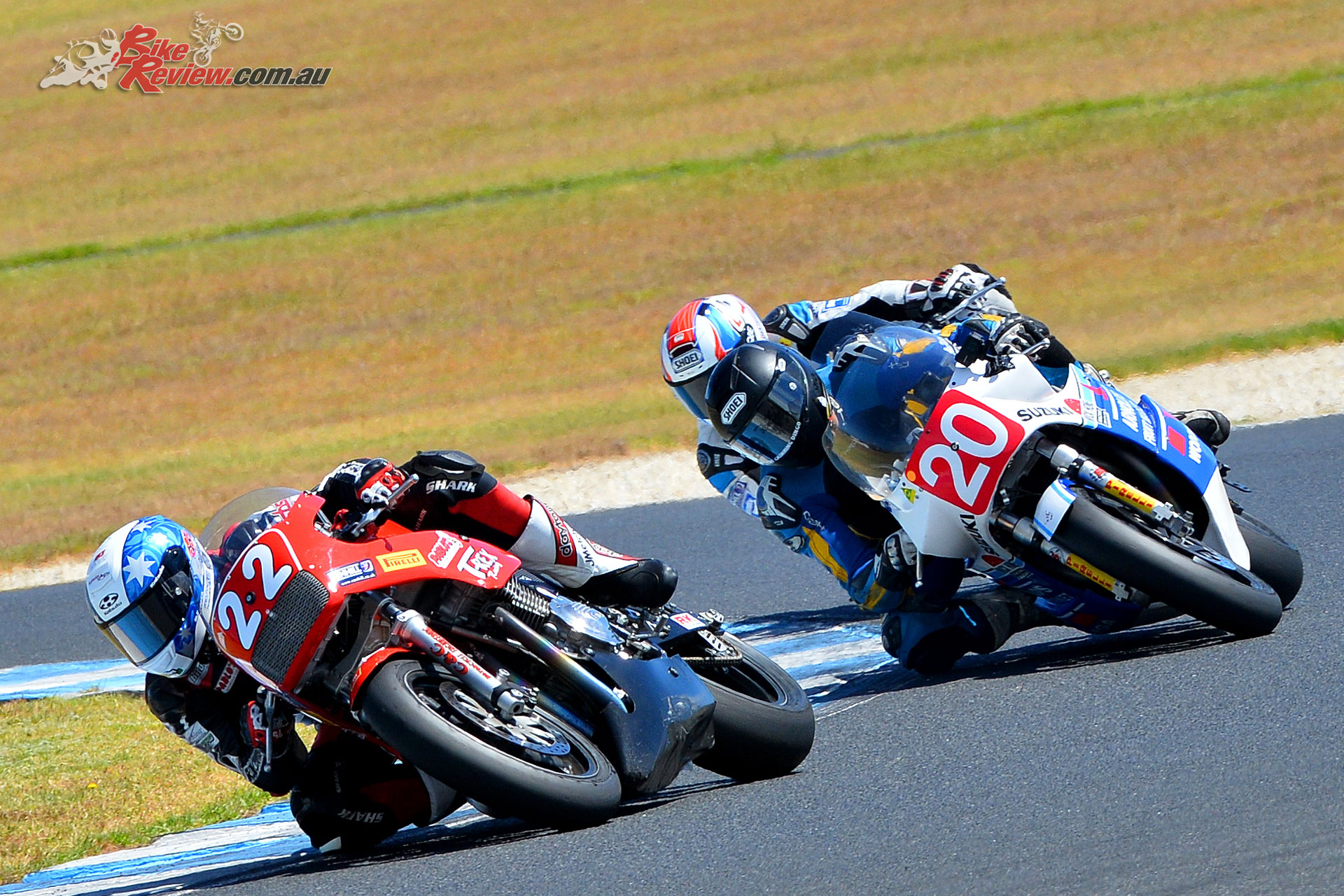 Carl Cox spoke for Team NZ, with the international DJ bringing his Taupo based team to the Kiwi outfit and with a star roster of riders.

“Unbelievable! We got to see some really good battles, Phillip Island is always so emotional by the end of the day; the wins and losses, and things that do break down. It’s been an historic day with the Americans winning for the first time which is amazing, they’ve flown all the way over here and with all their efforts and passion to get to the top, they finally did it!” said Cox post race. “We’ll have to step up, the Americans are here now, their laying their flag down, it’s happening.” 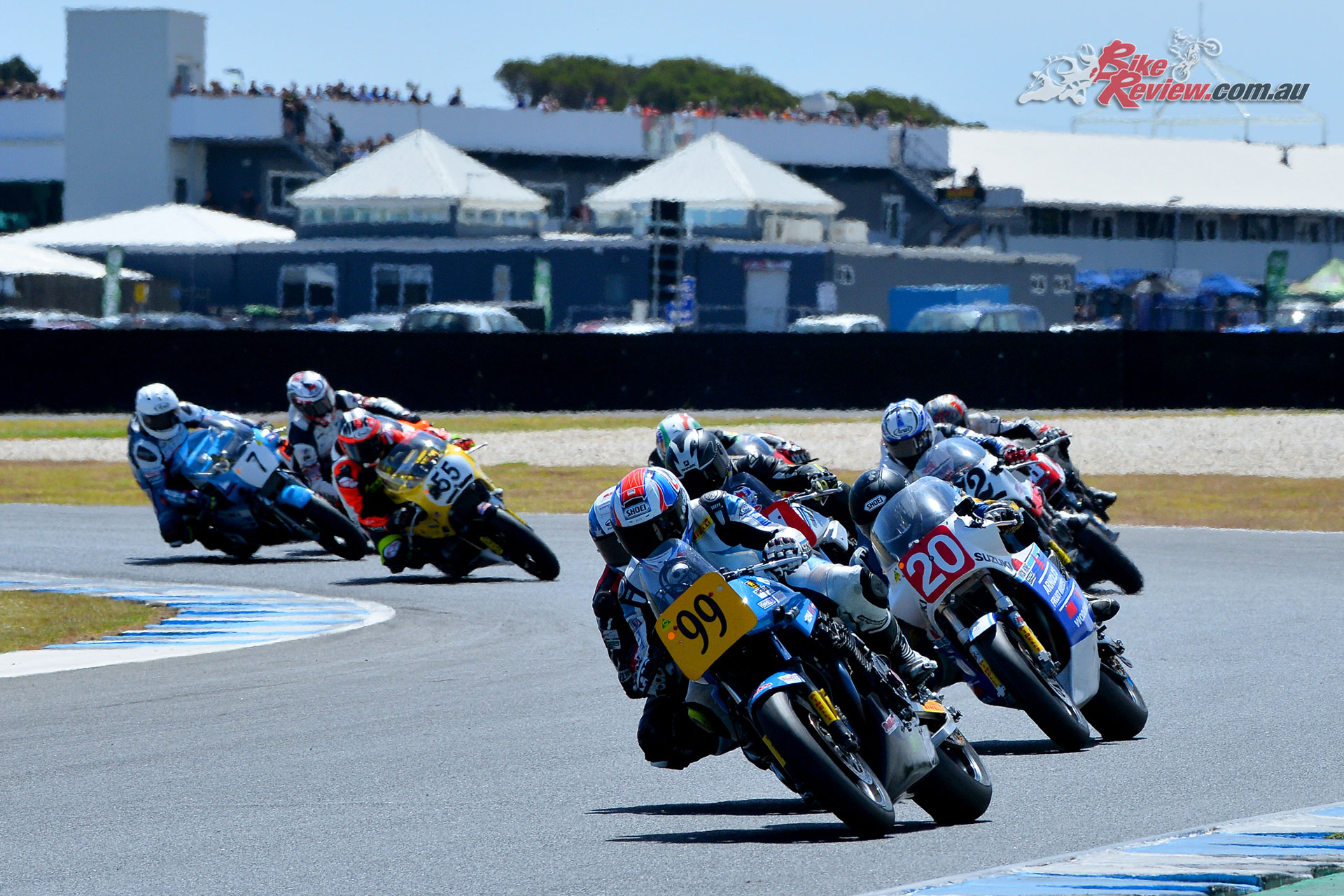 Steve Martin in the lead – Image by Russell Colvin

Australian riders finished at the pointy end in this morning’s International Challenge six-lapper, with experience coming to the fore in the shape of elder ‘statesmen’ Steve Martin and Shawn Giles, who finished first and second ahead of day one hero and fellow Suzuki Katana rider Aaron Morris.

The local domination allowed Australia to build its buffer ahead of Team USA and New Zealand heading into the fourth and final race.

Martin, the former world endurance champion and soon-to-be 51-year-old, showed he still has what it takes in race three, finishing a whisker in front of three-time Aussie superbike champion, 46-year-old Giles, also on the Katana.  Giles also set the fastest time of the race, a 1m37.425 flyer on lap four. 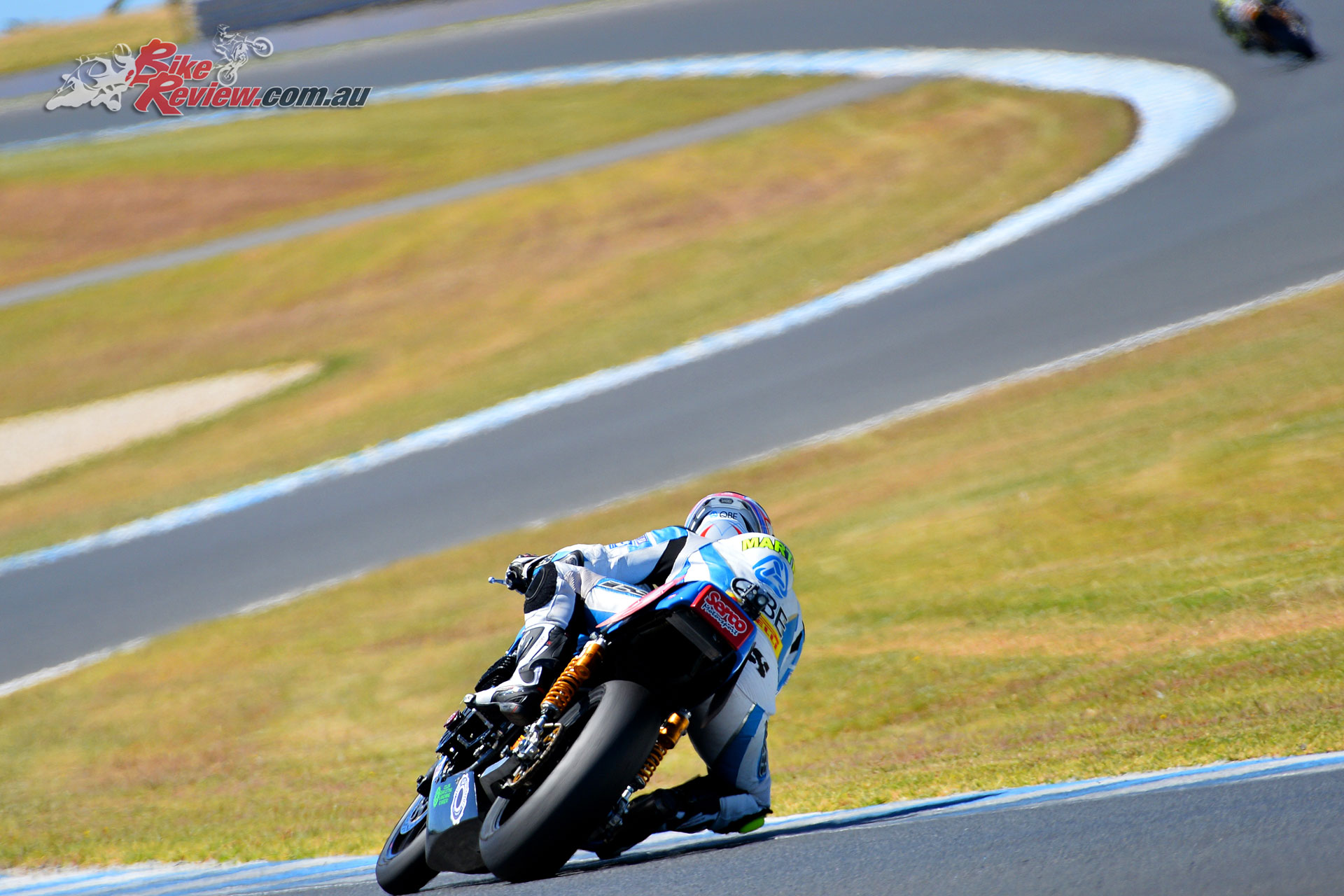 Twenty-six-year-old Morris, who hails from Newcastle, looked set for another victory before he erred on his final run to the line, allowing Martin and Giles the opportunity to fly past. Morris struggled with his machine today, with the Katana jumping out of fourth gear.

Melbourne’s Jed Metcher on the T-Rex Honda came in fourth to complete a quadrella for the Aussies.

It was a good effort from the Australians, with the only real disappointment the DNF of last year’s individual winner, David Johnson. He has struggled with his No. 3 Suzuki all weekend, plagued by mechanical problems. 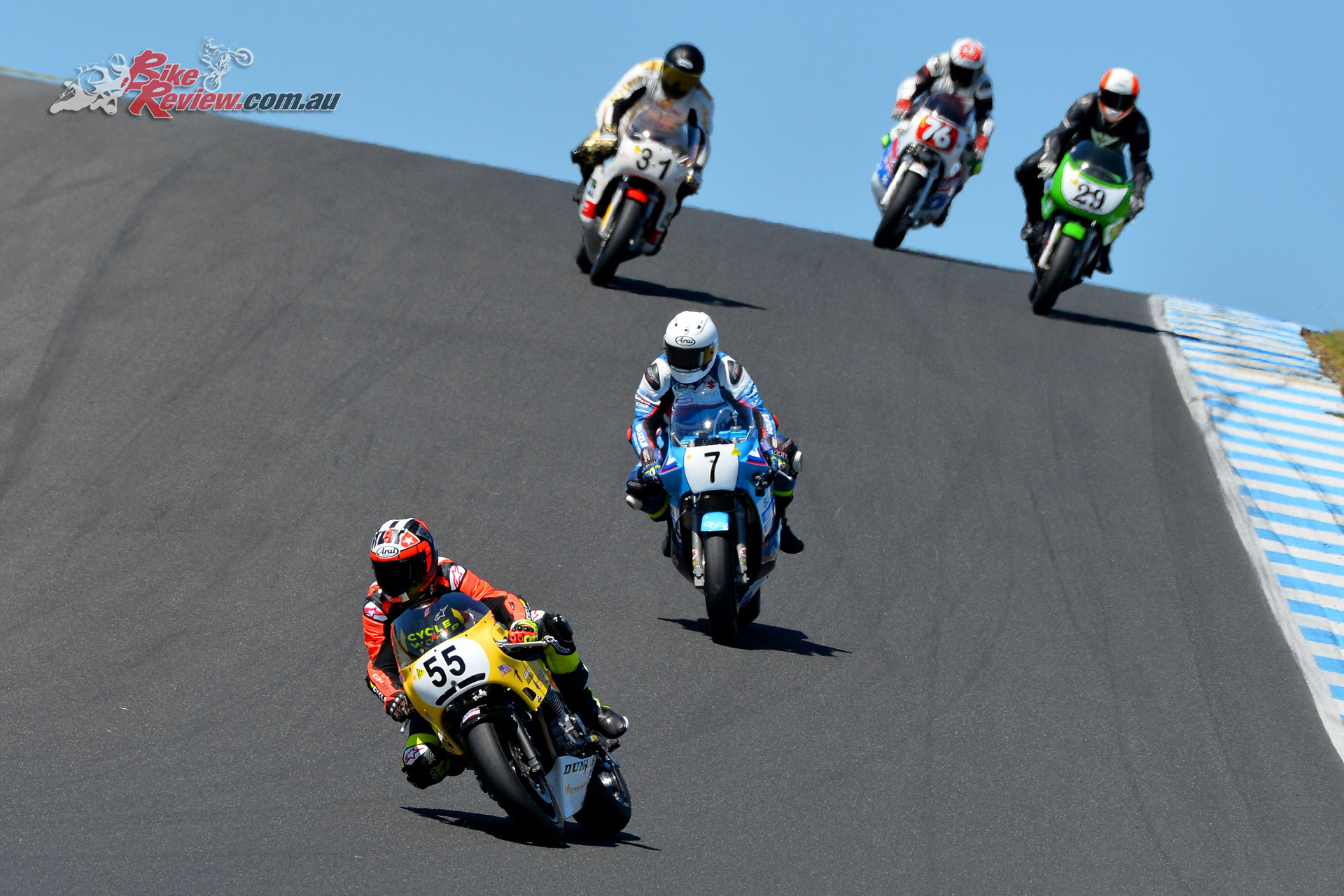 Team USA took the next three spots on a fleet of Yamahas, with fast-starter Larry Pegram fifth across the line – before a jump start penalty pushed him back to seventh.  Teammates Michael Gilbert and Steve Rapp then moved up the tally to take fifth and sixth.

Craig Ditchburn and Dean Oughtred took eighth and ninth, with first across the line for the Kiwis, John Reynolds in the 1985 Suzuki Katana.  Alex Phillis, who was the best performer for the Team NZ on Saturday, sat out race three due to a problems with the cam chain.

For Team USA’s Josh Hayes, race three did not go as well as Saturday’s outings where he scored 3-4 results. He made an error that saw him drop back from the race leaders early and ended the bout in 15th place.

FROM THE MEDICAL WARD UPDATE

Team USA’s Jason Pridmore and Australia’s Beau Beaton didn’t have the world’s greatest weekend after being injured in yesterday’s big crash at turn 11, early in race one.

Pridmore high-sided in his pursuit of Morris and Metcher, and Beaton crashed hard into the American’s Yamaha as it lay on the track.  Transported to Melbourne, they are both in the hands of medics at the Alfred Hospital with Pridmore nursing a broken leg and Beaton with a fractured L5 vertebrae and small fractures to his pelvis and sacrum.

Both took to social media overnight to post updates, thanking the Racesafe medical staff at the circuit and the Alfred Hospital and wishing their teams good luck today.

“We wish both Jason and Beau a speedy recovery. I’m thankful for our medical staff here and at the Alfred and it’s good to know they are in such good hands.  We look forward to welcoming them back to the Island next year bigger, better and less painful for both of them! ” said circuit general manager, David Bennett. 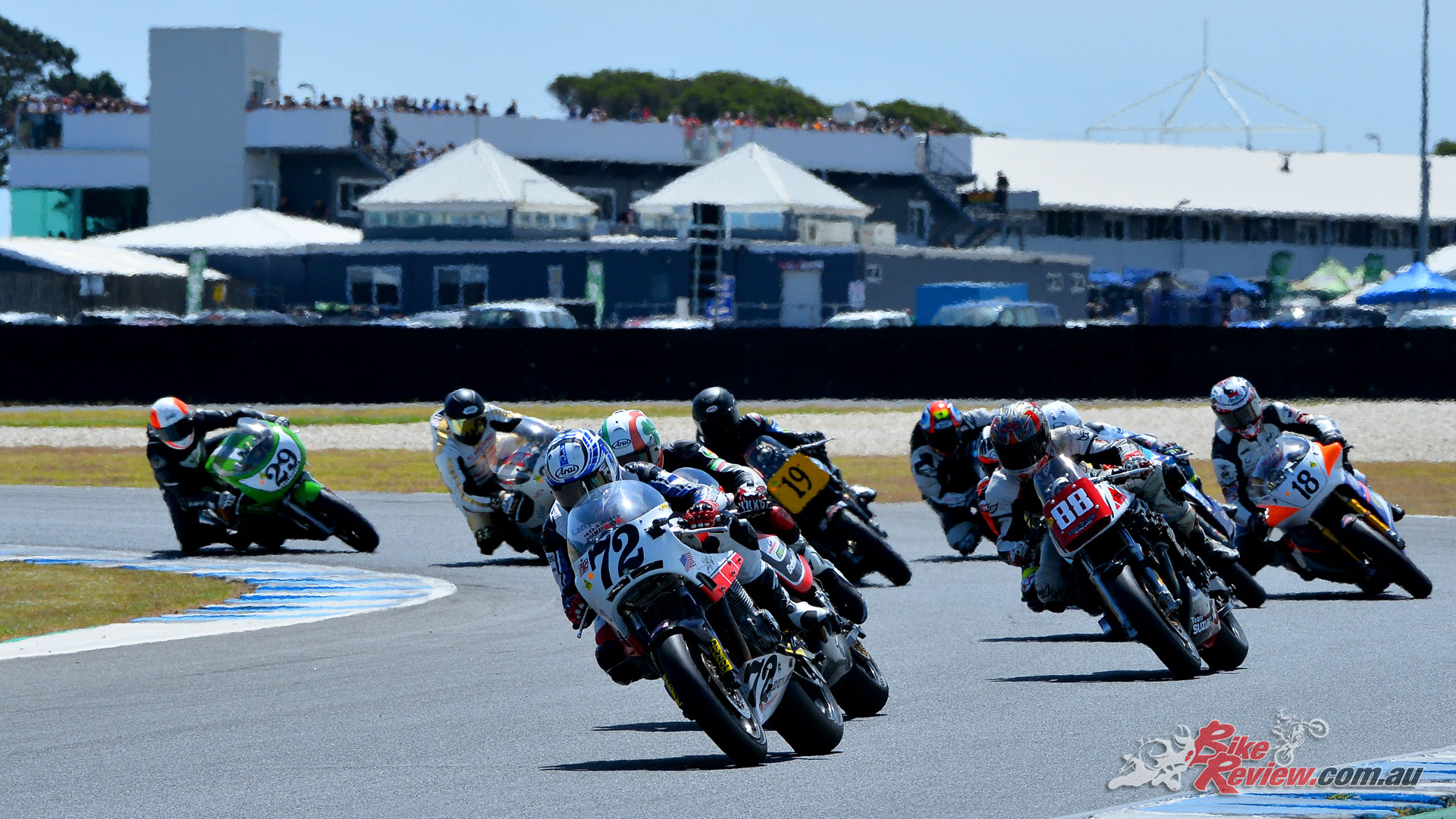