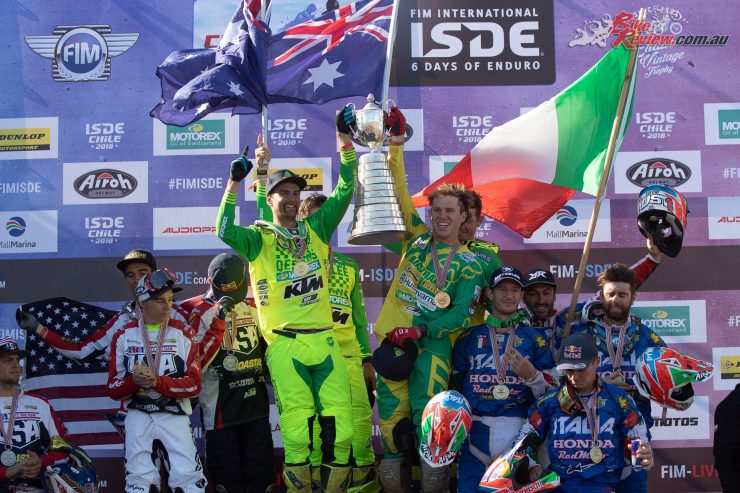 Upon the close of the 93rd edition of the FIM International Six Days Enduro (ISDE), hosted by Chile in the sunny city of Vina del Mar, the results are in and Australia’s World Trophy Team has claimed the 2018 world title ahead of USA!

The Australian Junior World Trophy Team have also secured their place in the top five, remaining in fifth place overall for the 2018 title. 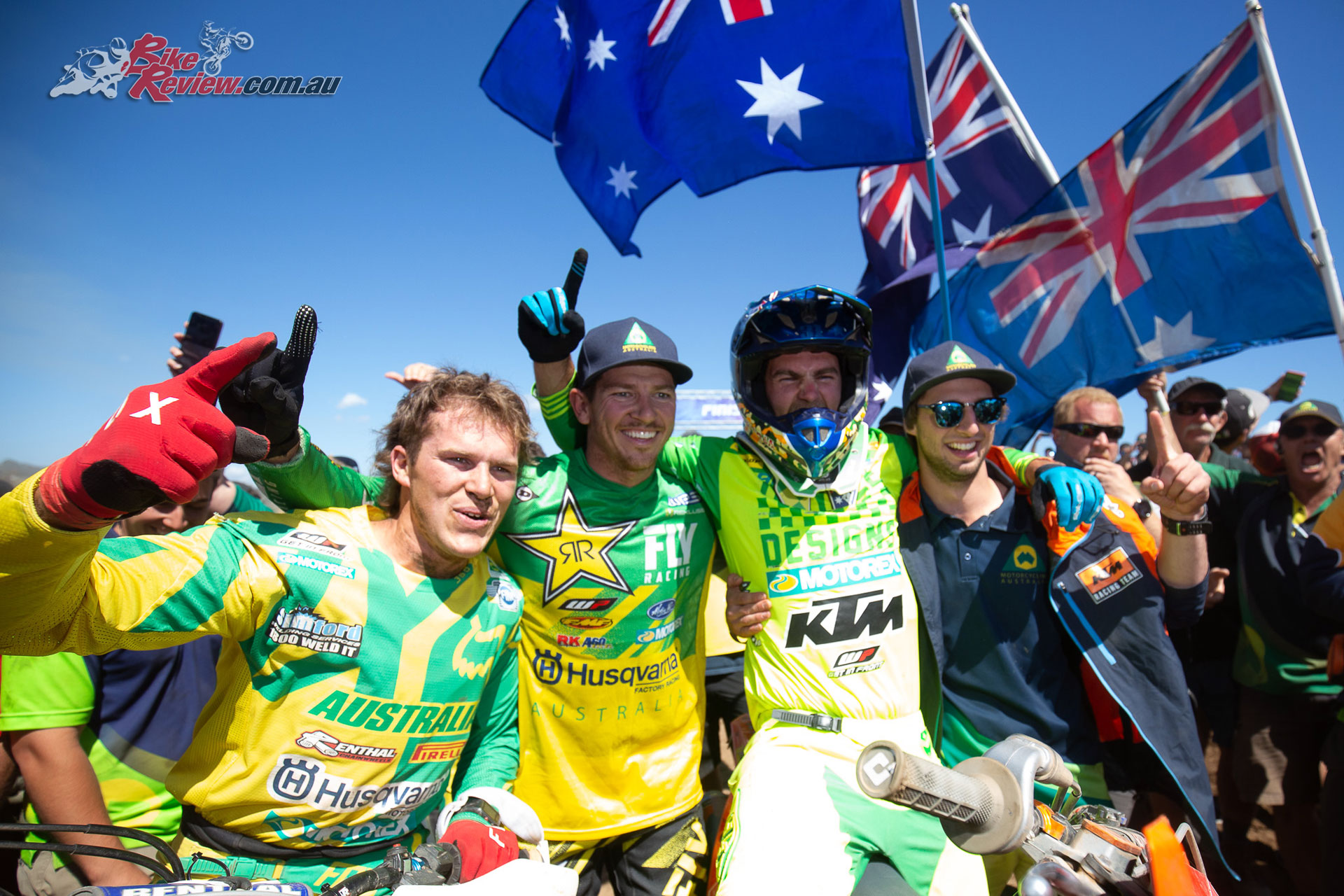 After a gruelling five days in the punishing heat and dust, travelling more than 200 kilometres per day, everything came to a head in the sixth and final day, with a short and fast Motocross circuit race. The aim of day six was to remain mistake free, with the fastest times becoming critical to clinching your nation’s position on the podium.

In front of a packed-out circuit in Vina del Mar, the Australian World Trophy Team once again brought the fire to their international rivals, producing world class riding to remain well ahead of Team USA by just over seven minutes. 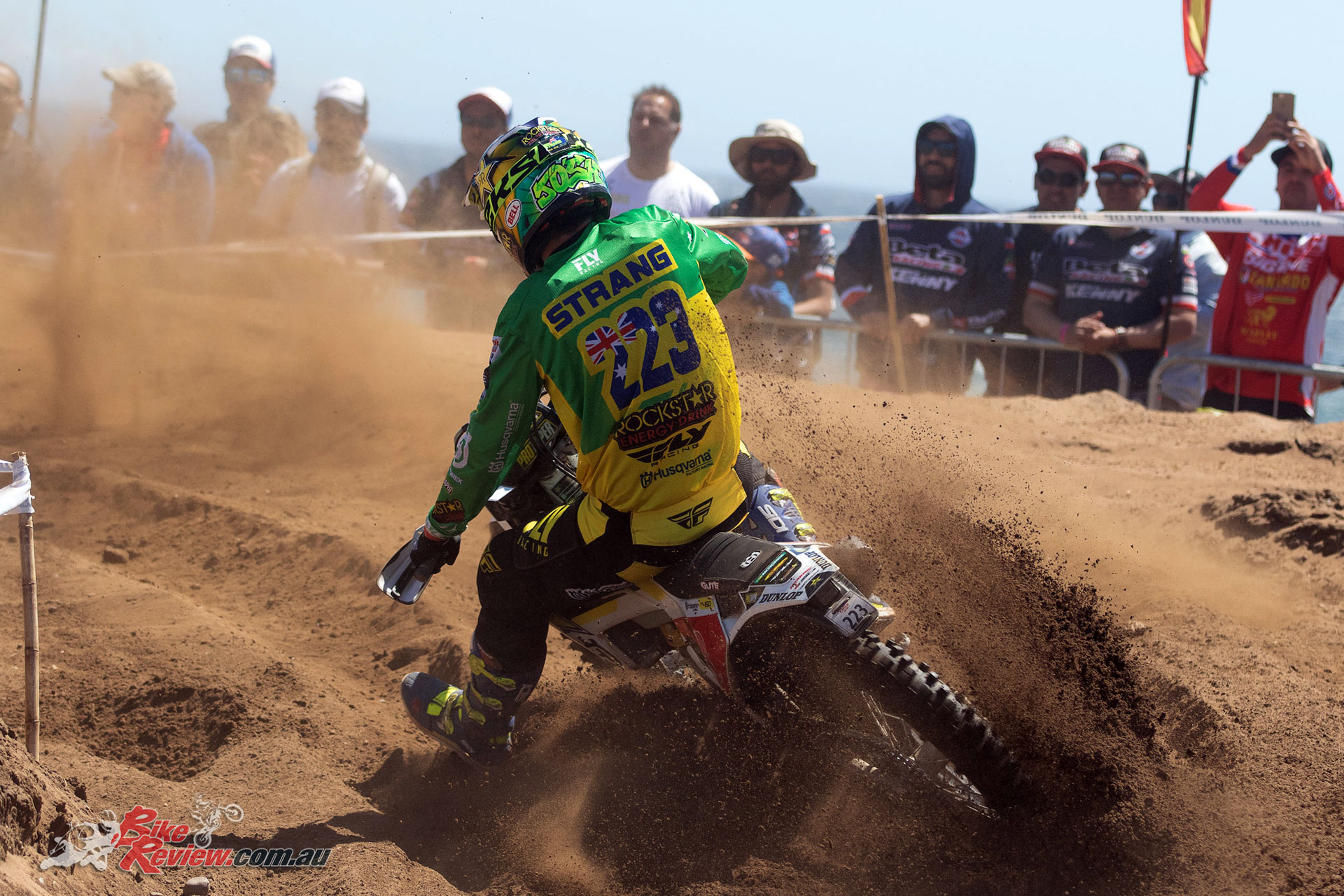 Trailing behind USA was Italy, France and Spain, with Spain following behind Australia by just over 21 minutes. After five days of performing a tango with his USA counterpart, Taylor Robert, Daniel Milner maintained his first-place position overall for 2018 by nearly two minutes whilst also being awarded the title as the 2018 E3 Champion! France took out fastest time for day six in the World Trophy Class but could not impact the domination of Team Australia in its bid for the 2018 title.

Milner scored the fastest time for Australia in day six of 13:18.84, followed shortly afterward by Daniel Sanders, who clocked in a fastest time of 13:20.73. Based on Sanders’ world class efforts throughout the past six days, he has successfully secured his place on the podium as second place overall, sitting eight seconds behind Team USA’s Taylor Robert, and second place in the E3 category behind Milner.

Rounding out the 2018 World Trophy Champions was Joshua Strang, who finished day six with a fastest time of 13:35.47. Strang’s commitment throughout the 2018 ISDE has seen him support his two teammates on the path to victory and based on his results across the past six days he has taken out 10th place overall and fourth place in the E2 category! In an unfortunate turn of events, Lyndon Snodgrass fell from the race back in day two due to a bike malfunction. In the face of adversity however, Team Australia rallied together in the remaining four days to take out the world title! 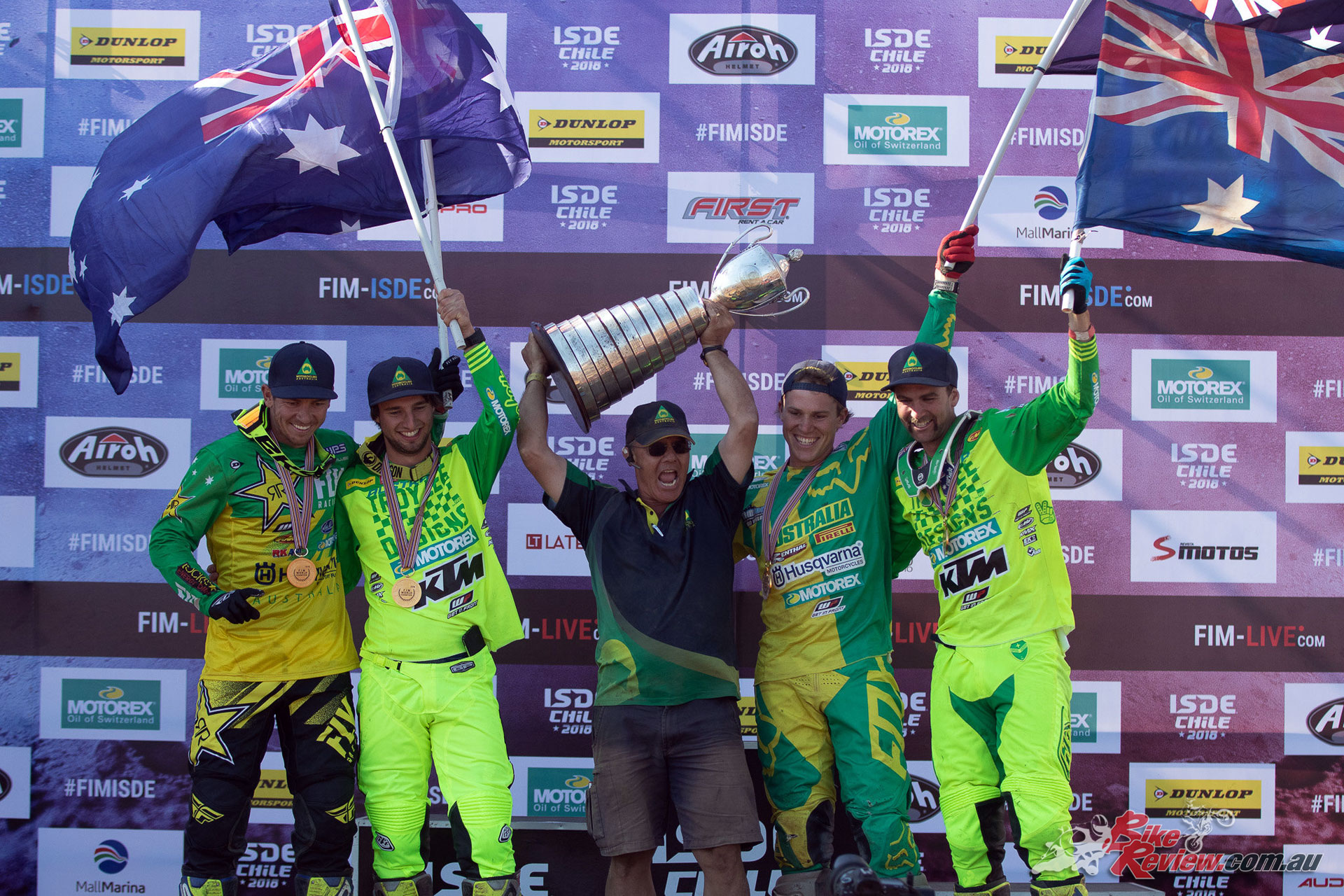 Riding an undeniable high after finishing the home-stretch and taking out the 2018 World Trophy title, Daniel Milner couldn’t be happier with the final results sharing, “The past six days have been dry and dusty, but today on the beach was awesome! It felt like a little slice of home, and it was a real highlight to see and smell the gumtrees, remembering life back home in Australia! We won in the World Trophy title back in 2015, but this year we were the fastest team and no one could touch us, so it was fantastic to win fair and square! Our team was so strong, and in the end, it really was a team effort and we couldn’t have done with without everyone’s support.

“The team complimented each other really well. I have been riding with Sanders all year in AORC and we’ve been pushing each other along. Strang has been riding overseas, doing really well in the sprint series of the GNCC’s. In conditions that may not have suited him well, Strang rode really well and helped get the team to where they are now. Although Lyndon had an unfortunate bike malfunction, he was here every day helping us out.” 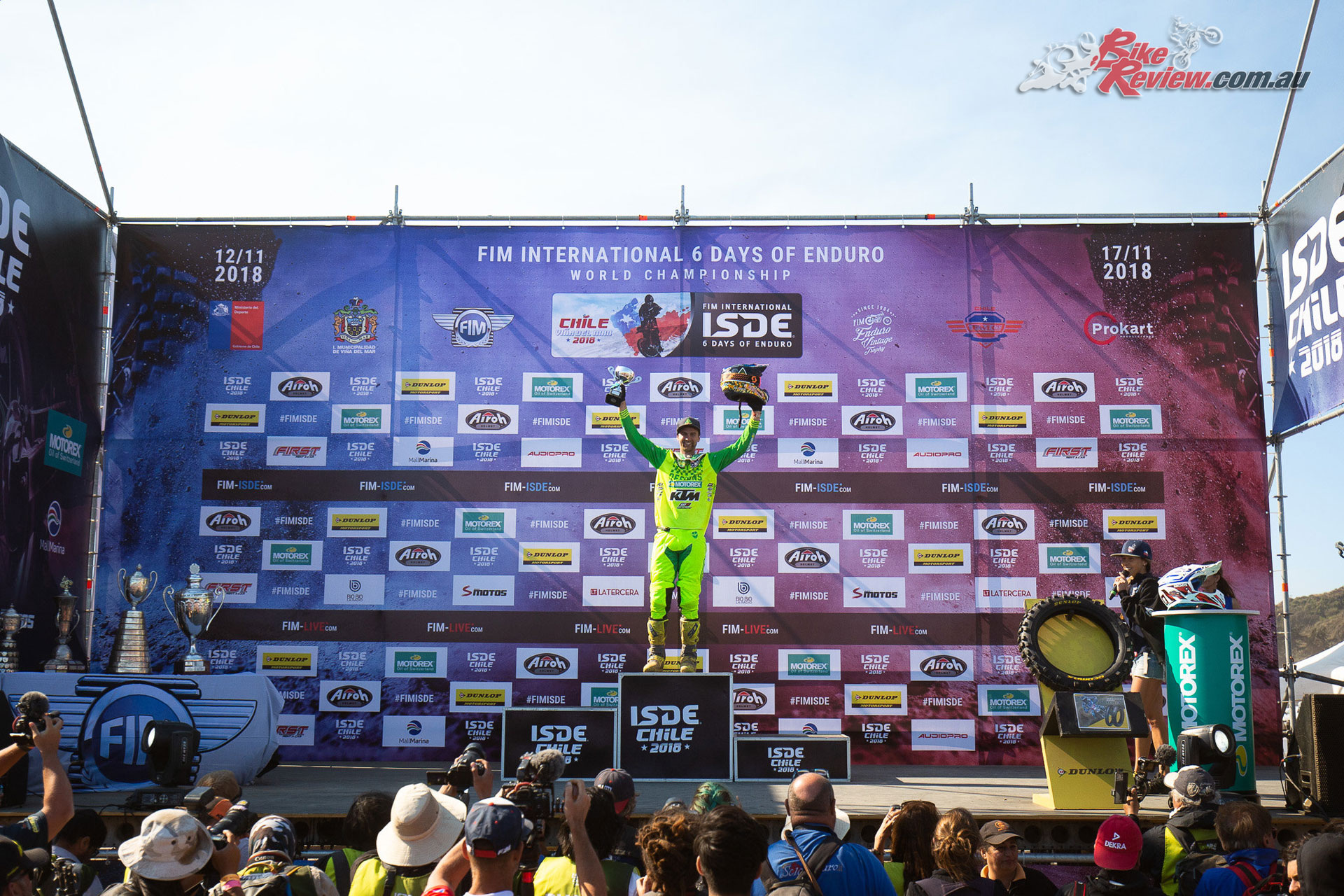 Reflecting on an enormous week and an even bigger end result, Daniel Sanders was elated with the team’s efforts from day one, noting; “it’s day six and we’ve wrapped it all up! It is unbelievably good to get my first World Trophy win with the boys, and it’s simply been an awesome week. Personally and as a team, we couldn’t have done it without all our supporters, volunteers, and Motorcycling Australia staff.”

Reflecting on a trip that didn’t go the way he planned, Snodgrass noted; “it’s been a bit of an up and down trip. My race didn’t go the way I wanted it to with a mechanical issue in day two, but luckily the other boys were able to bring home the win which was a pretty incredible effort. After I retired I just tried to help them bring home the win any way that I could.”

Third rider for the Australian World Trophy Team, Strang was humbled by the success of the team and support from volunteers, highlighting; “I think all we had to do was finish today to win the title. Sanders scared us a little in toward the end of the race but thankfully everything ended up ok. Milner and Sanders rode well all week which scored us the win in the end I think.

“You see all these people supporting us, calling it a holiday but I think they work harder here than in their normal jobs, that’s what makes it all worth it. We couldn’t have done it without them. 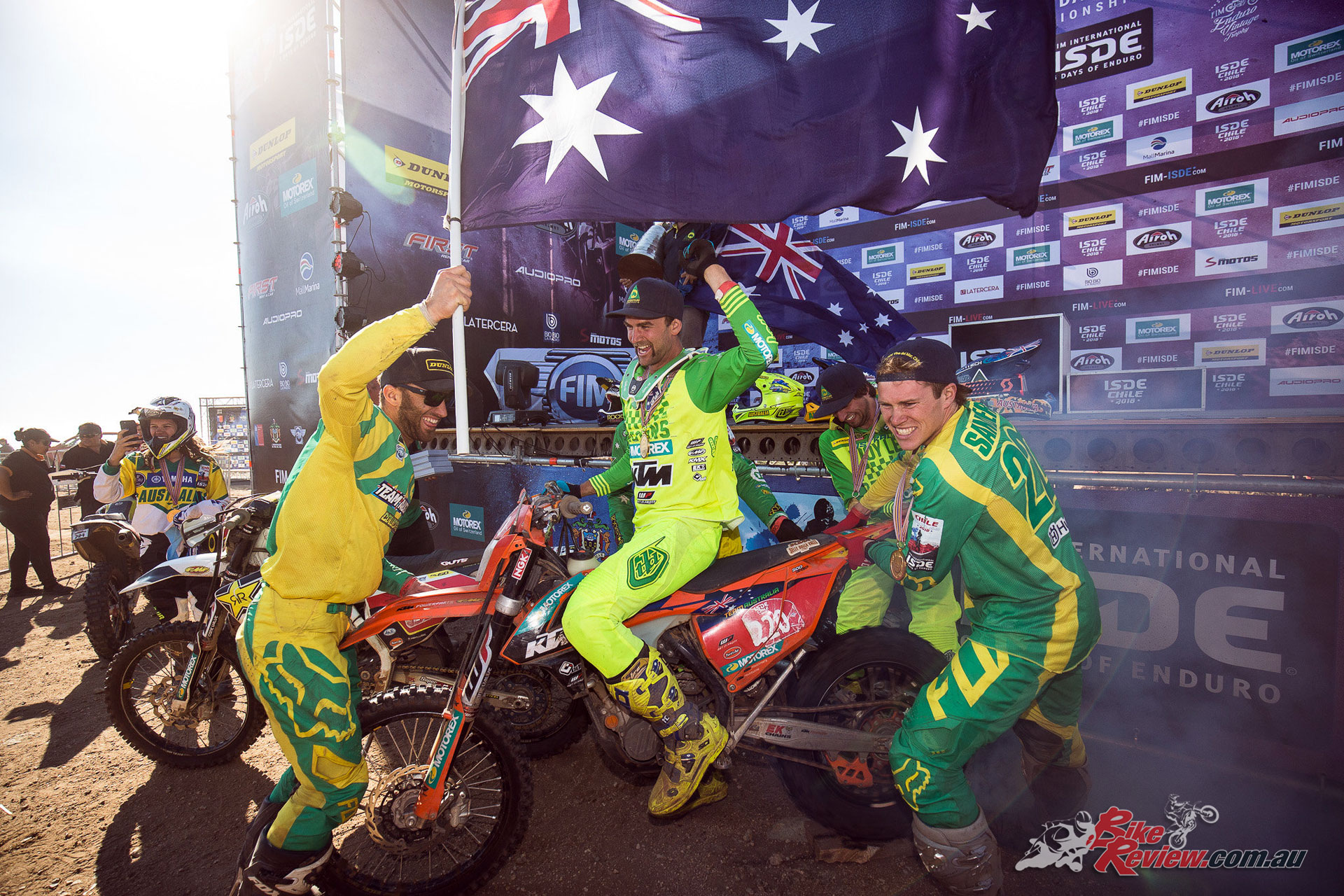 “Its been a long time coming. Australia’s been breeding really strong riders in its AORC series like Milner and Sanders, plus supporting junior riders as they rise through the ranks. I think Motorcycling Australia and all Australian’s should be really proud of what Australia has achieved today!”

Turning to the Junior World Trophy, the 2018 title has been awarded to Italy, with second and third place nabbed by USA and France respectively. The Australian Junior Trophy Team has finished the tough and challenging six days with a fantastic result of fifth place, sitting behind Chile by just over 14 minutes.

As Team Australia rounds out the top five in the junior class, our three riders, Fraser Higlett, Thomas Mason and Andrew Wilksch have no doubt shown nations near and far that the emerging talent from Australia is world class. Clocking in the fastest time for day six was Mason of 14:18.01, who seemed at home on the Motocross circuit. Mason’s excellent efforts in day six has seen him move up to 51st position overall and 16th position in the E3 category!

Coming in hot after Mason was Wilksch, with a fastest time of 14:40.17. Due to the immense pressure from international counterparts, Wilksch has moved down to 49th position overall and has ended the six days in 15th position in the E3 category.

Rounding out the Australian Junior World Trophy Team in day six was Higlett, who clocked in a fastest time of 19:54.96. In a dramatic final day, Higlett ran into an issue in the final race and had to push his bike across the line after two laps! Higlett’s sheer determination over the course of the past six days has seen him take out an impressive ninth place in the E1 category, and 38th overall.