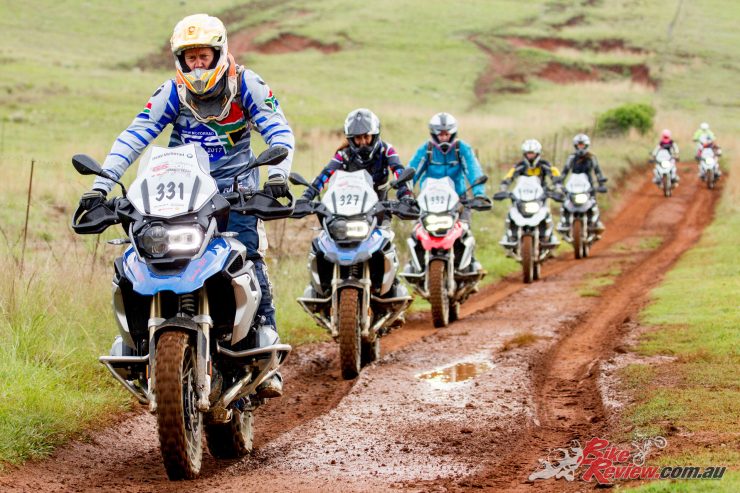 The BMW Motorrad International GS Trophy Female Team Qualifying 2017 has concluded with something of a surprise outcome. After four days of competition at the Country Trax Off Road Riding Academy near Amersfoort in South Africa not one but two teams have qualified for the sixth BMW Motorrad International GS Trophy that will be held in Mongolia in June 2018.

Such has been the high standard of riding at this event, the BMW Motorrad team decided, in a spontaneous act, to ‘double up’ and take six women GS riders to Mongolia. 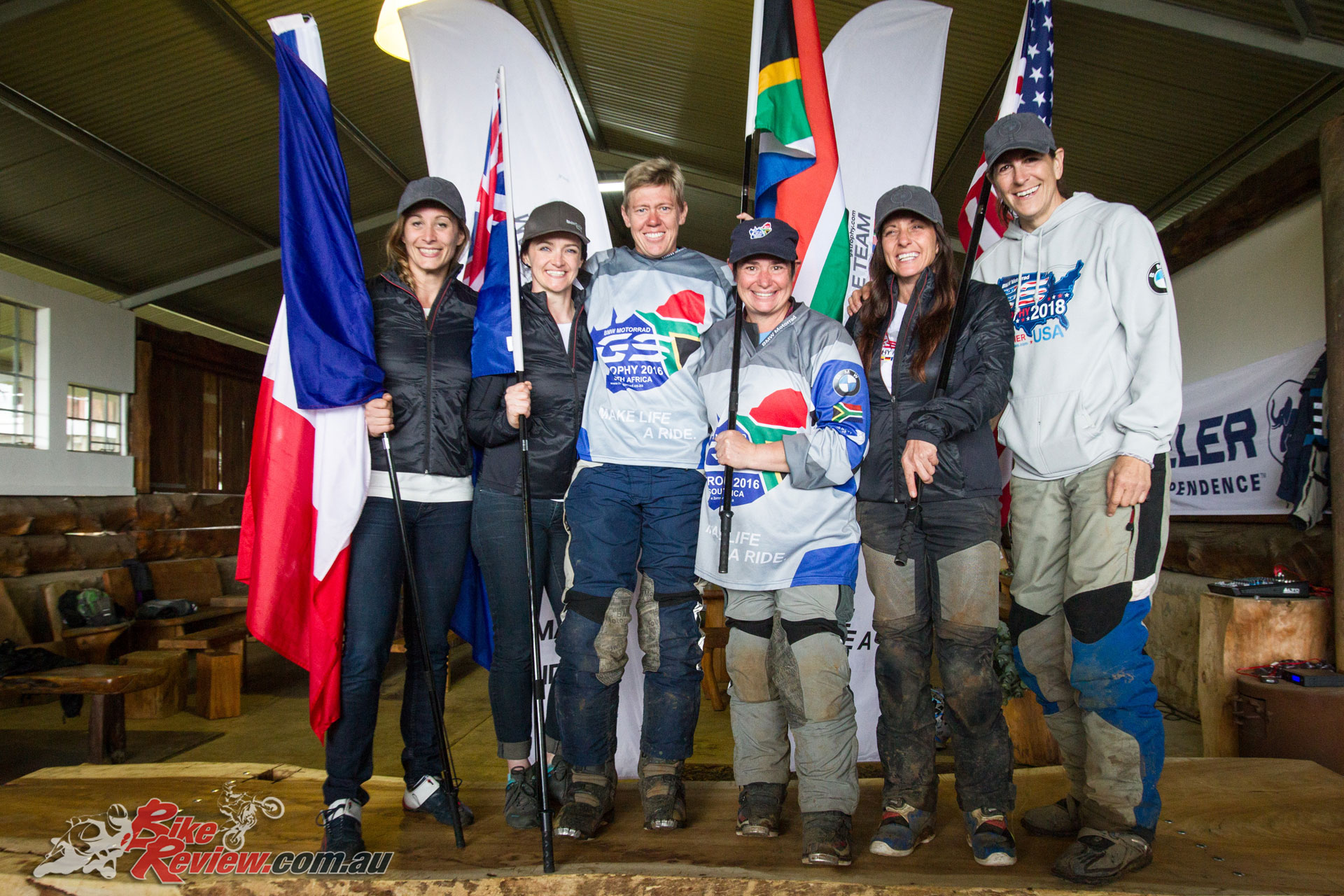 The path to qualification hasn’t been easy. After their national qualifiers 23 women from 13 countries (South Africa, Australia, France, USA, Germany, UK, Malaysia, Japan, Canada, Mexico, Colombia, China, Thailand) won their way through to the BMW Motorrad International GS Trophy Female Team Qualifying in South Africa, no doubt expecting a tough competition, conducted in the toughest conditions, all under a hot African sun. They certainly found tough conditions, but not the expected as huge thunderstorms rolled across the veldt on all four days (and nights). The sun made only fleeting visits when the clouds reluctantly allowed.

Day 1 saw the participants’ arrival and immediate immersion into the competition. As is the nature of the GS Trophy anything and everything can be a challenge, and so the organising team set the women immediately onto their first challenge: to get their tents pitched and changed into riding gear – against the clock, of course. 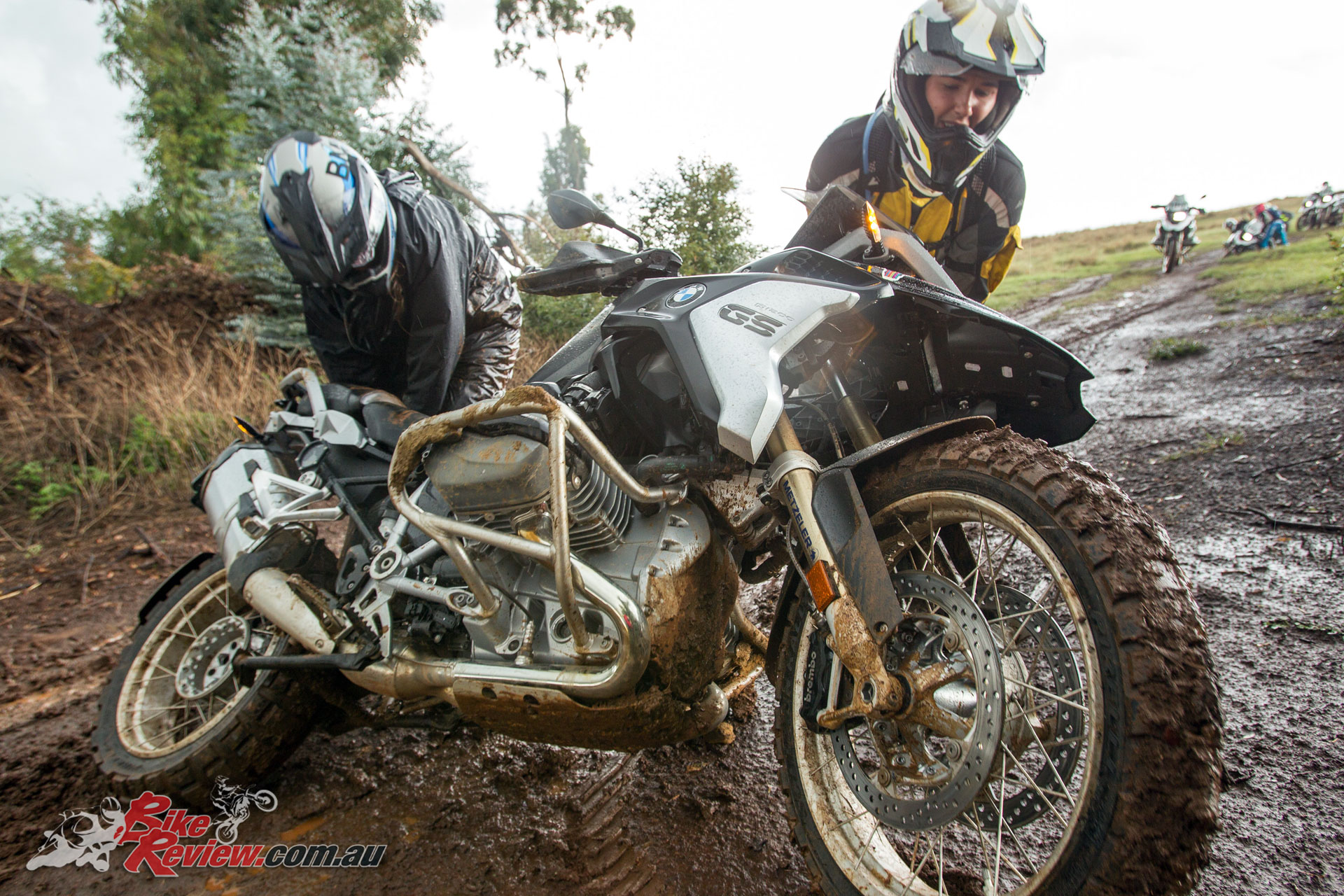 Now ready for adventure action, three back-to-back challenges were set: a 50 metre run followed by a dash on the GS up a hill to a stop box; a test of balancing a GS while walking around it – one handed, and repeated twice; and third, a riding-blindfolded test, where the women had to try to reach a target set at the far end of the field (much harder than it sounds). Two out of the three tests were completed before a huge thunderstorm rolled menacingly in, forcing the organisers to postpone the balance until the morning.

Day 2 proved to be a marathon day. Started at 7am, so as to complete the challenges from day one, but then followed by no less than six more challenges. These included a speed test riding a slalom course in deep sand and a time-trial (cross-country course) complete with Le Mans start to again assess the women’s higher-speed riding capability. 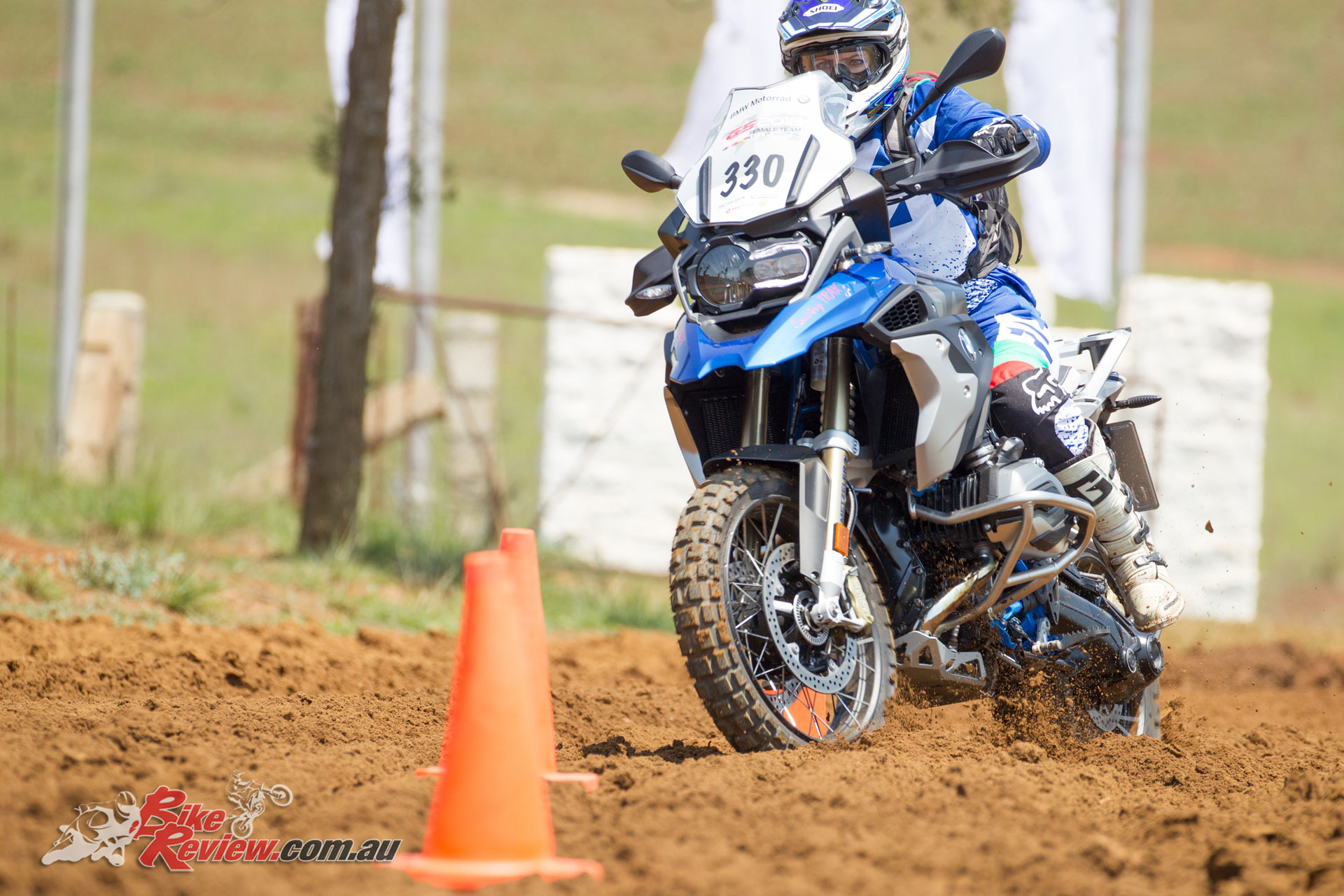 After dinner that night the participants received a nasty surprise when the nine-lowest scoring participants were eliminated from the competition, or ‘promoted to spectator status’ as event manager Stefan Boshoff described it. The day wasn’t over, though, as the remaining 14 participants were sent out at 10pm for a 25km night-navigation challenge (in three teams) complete with a further challenge of repairing a puncture at the mid-point. The teams rolled back at just before midnight, successful but exhausted after a 17 hour day.

Day 3 started with another mechanical aptitude test as the participants were challenged to remove the rear wheel from their GS then run with it for 50 metres then refit it – all within four minutes. Not easy with five torqued wheel studs to loosen, realign and tighten with only a modest sized T-bar.

Then followed a slow race, made all the more difficult as the grass was soaking, making wheel spin a constant worry. Two technical riding challenges followed that proved incredibly tricky as the constant rains had rendered the clay soil ice-like – throttle control and balancing skills have never been more severely tested. 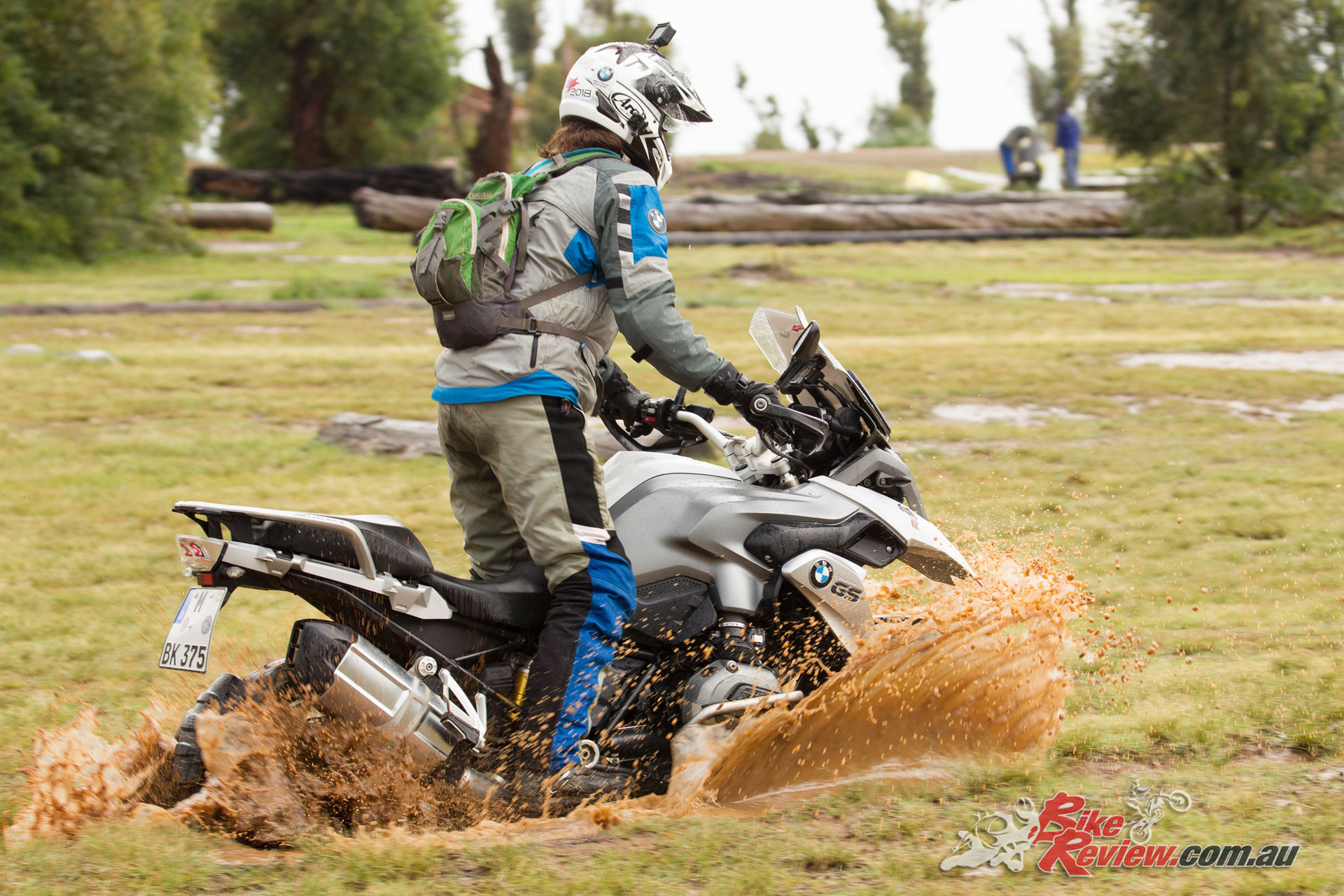 Later the women set off cross-country across the Country Trax 600 acres to find two more tough riding challenges that tested their ability to ride steep off-cambers and to make fast weaving progress over slick terrain. Tough technical challenges that trials riders revel in, much harder on a near 250-kilo GS.

Again the women shone – until yet another thunderstorm forced another retreat as pelting rain and lightning strikes rendered the exposed hillsides a dangerous place to be. That night came another unexpected elimination and five more participants found themselves out of the running. The final day would be a battle of the best nine for the three finalists’ positions – or so they thought. 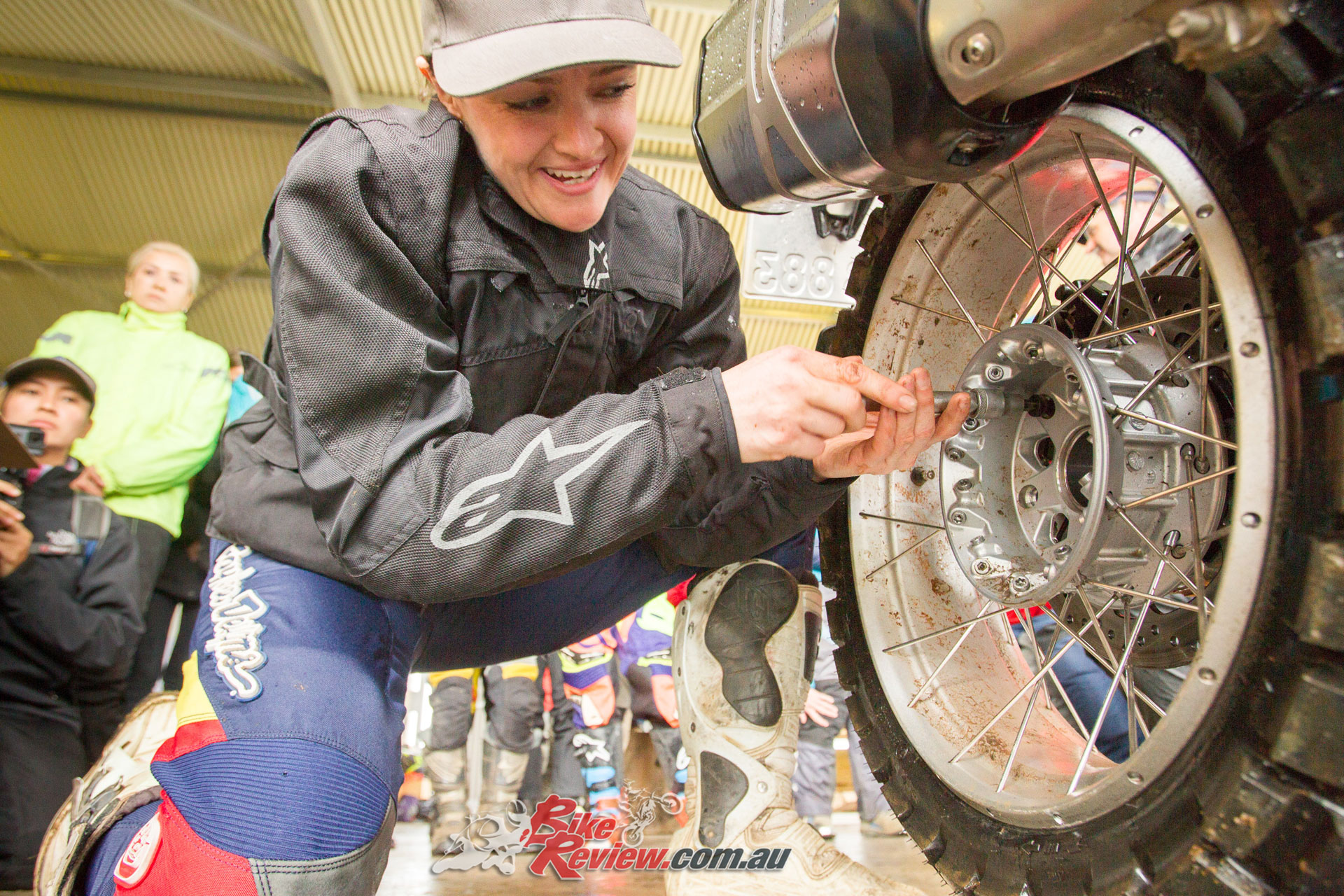 Day 4 – the last day – started under the same leaden skies as the three previous. The remaining nine tried to calm their nerves; those in the top positions contemplating defense strategies while the other six were coming with a win-or- bust attitude. In the end all simply had to do their best.

The first challenge combined a fairly straightforward ride through a straw bale maze with an energy- draining fractionally uphill backwards push of their GS to the finish line. Each competitor at least had the moral and vocal support of the other 22. It was a case of digging deep, and then digging some more.

Raising the GS onto a huge fallen tree trunk was the next challenge. Obviously too much for any one participant this was a three-person team challenge. 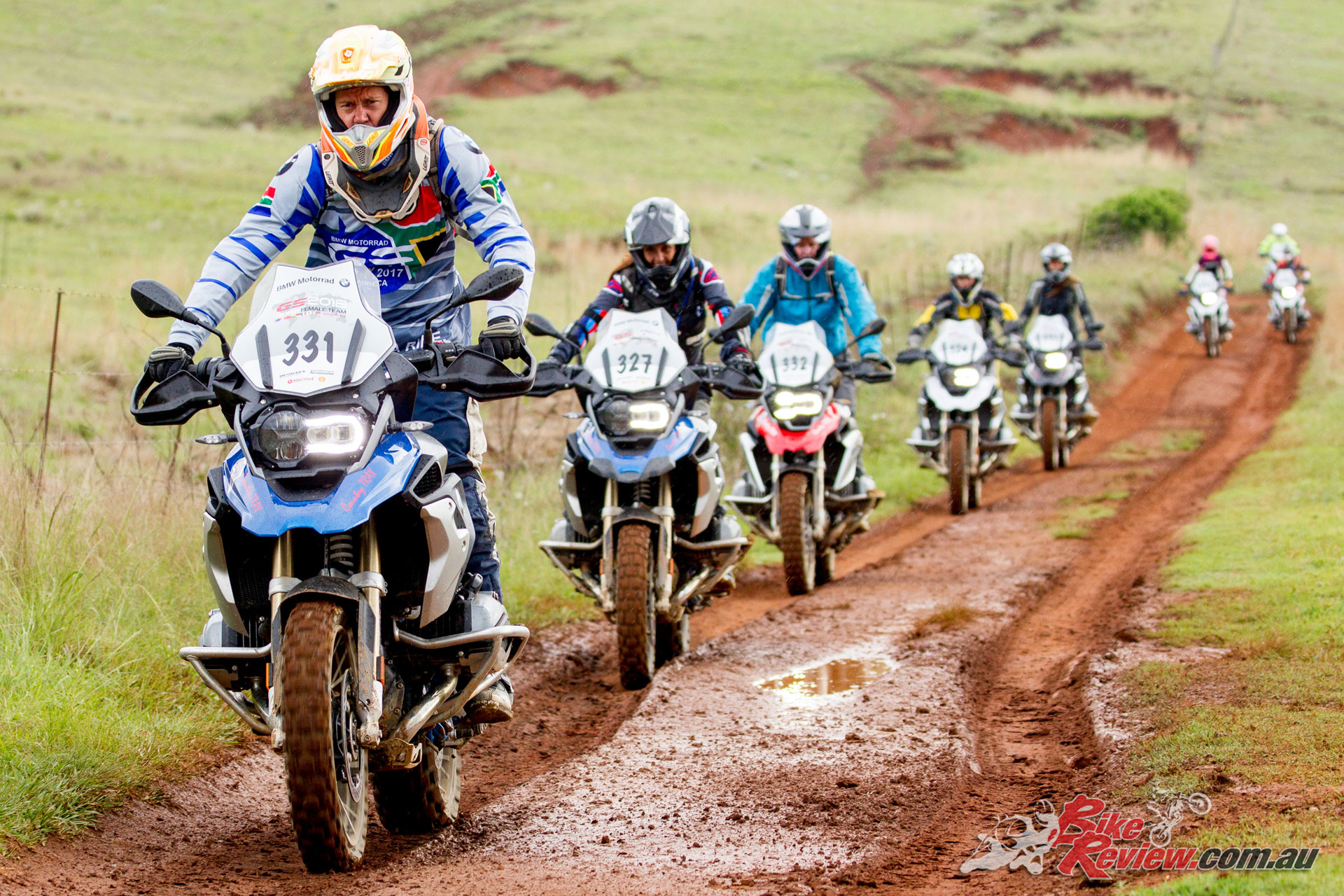 Despite some of the women being of diminutive stature, all three teams managed this in fine style. Then came the finale: a lap of a parcours course, calling for a broad spectrum of skills to deal with a see-saw, balance beams, 180º ‘elephant turns’ and the tricky matter of straddling their GS along a fallen telegraph pole and riding it along in a manoeuvre called a ‘log grind’. It was a long lap that called for sustained concentration, endurance and skills – a fine all- encapsulating challenge to end the competition.

All that could follow was the totalling of the scores and announcement of the winners. A tense occasion. The emotional release as the three winners – Ezelda van Jaarsveld (South Africa), Julia Maguire (Australia) and Sonia Barbot (France) – were called was huge with tears of joy, congratulations and commiserations. 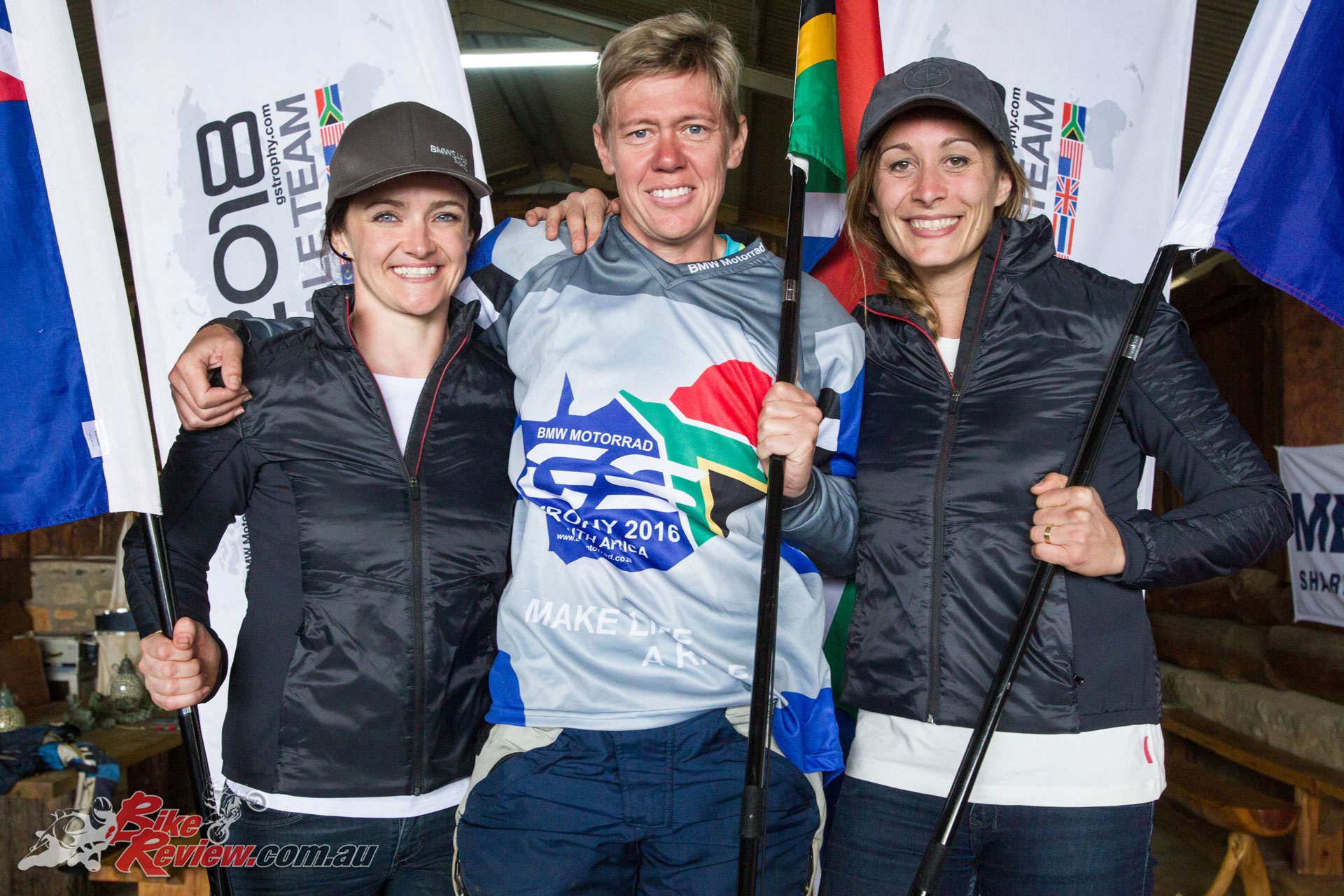 Julia Maguire of Australia, saying, “I’m so excited, very-very excited. Relieved! It’s been an emotional few days, although I think you always get that with a bunch of women! But so, so pumped to be going to Mongolia. I believed I could do it, and here we are! I didn’t know what level of riders would be coming, and the girls have been amazing, so it was challenging to keep it together through the whole thing, it was intense. Telling yourself, ‘you’ve done this a million times’ – I’ve been riding so many years – but then suddenly the pressure is on, everyone is watching, it’s a lot harder than doing it in the paddock at my parents’ place back at home! The pressure was tough, but I just had to believe, to do it. What is it they say? ‘Smooth is fast and fast is smooth!'”

But then, for another three – Jocelin Snow (USA), Linda Steyn (South Africa) and Bettina Nedel (USA) – came the sudden news that they too would be going to Mongolia. As you often hear said, but rarely believe, there wasn’t a dry eye in the house – and there wasn’t.

The second BMW Motorrad International GS Trophy Female Team Qualifying 2017 has been a resounding success and the resilience of the organisers, let alone the participants, to keep the competition going in the face of extreme weather has said much for the GS Spirit.

Mongolia beckons, an adventure into a magical, remote region. These six women have all shown they have the skills, the physical capability and that explorational inspirational GS mindset to indeed make their lives a ride.

The above all go to the BMW Motorrad International GS Trophy in Mongolia in June 2018, forming two Female Teams; the composition of the two teams will be announced at a later stage.