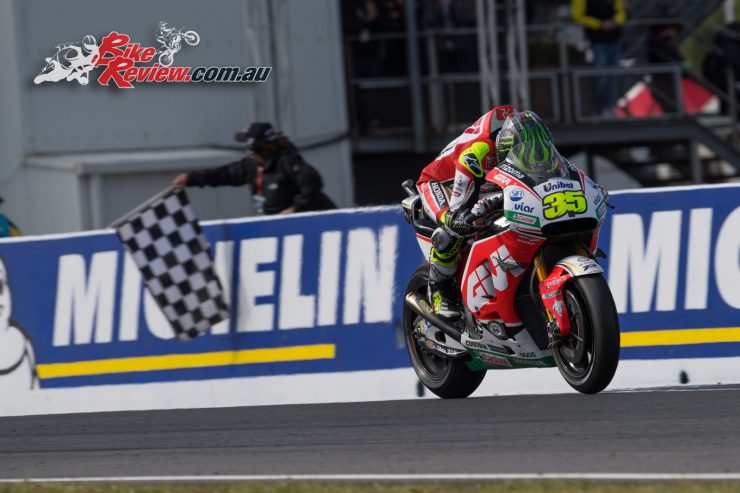 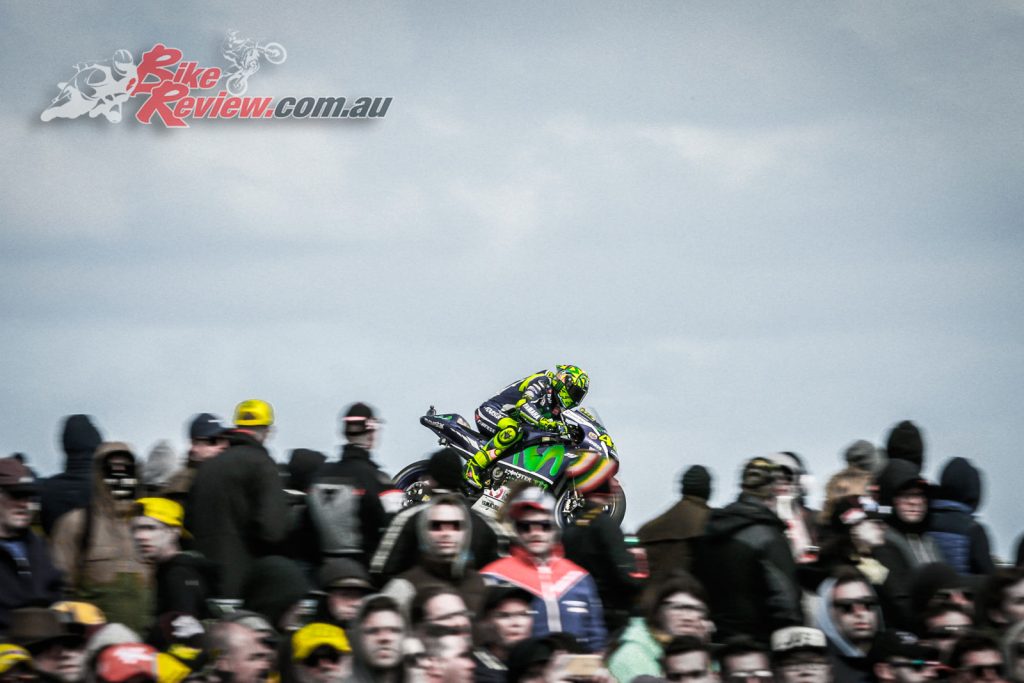 There were no miracle starts for those frontrunners starting further back for the Australian GP, with Jorge Lorenzo (Movistar Yamaha MotoGP) getting the best from P12 to move up to P9, and teammate Valentino Rossi gaining two places to P13 – with Maverick Viñales moving up only one.

It was Pol Espargaro (Monster Yamaha Tech 3) who got the holeshot from P3 on the front row, with polesitter Marquez the biggest loser off the line – before the 2016 MotoGP World Champion swept back around the outside of Doohan Corner to take back P2 and then fight off Espargaro through Lukey Heights and down into T10. Once at the front, the Motegi and Aragon winner set off in his rhythm, soon seconds clear. 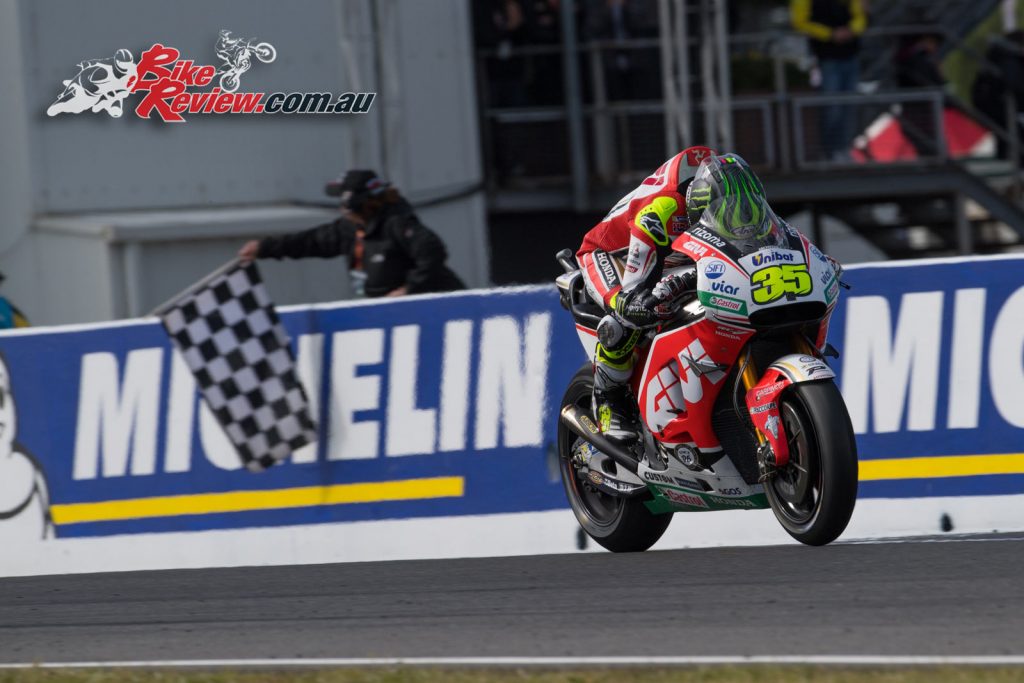 The fight for P2 between Crutchlow and Aleix Espargaro (Team Suzuki Ecstar) saw the Brit emerge on top, as Rossi was charging through the field – picking off Pol Espargaro and Andrea Dovizioso (Ducati Team) as the rider from Tavullia entered podium contention, then setting his sights on Aleix Espargaro and soon getting past. 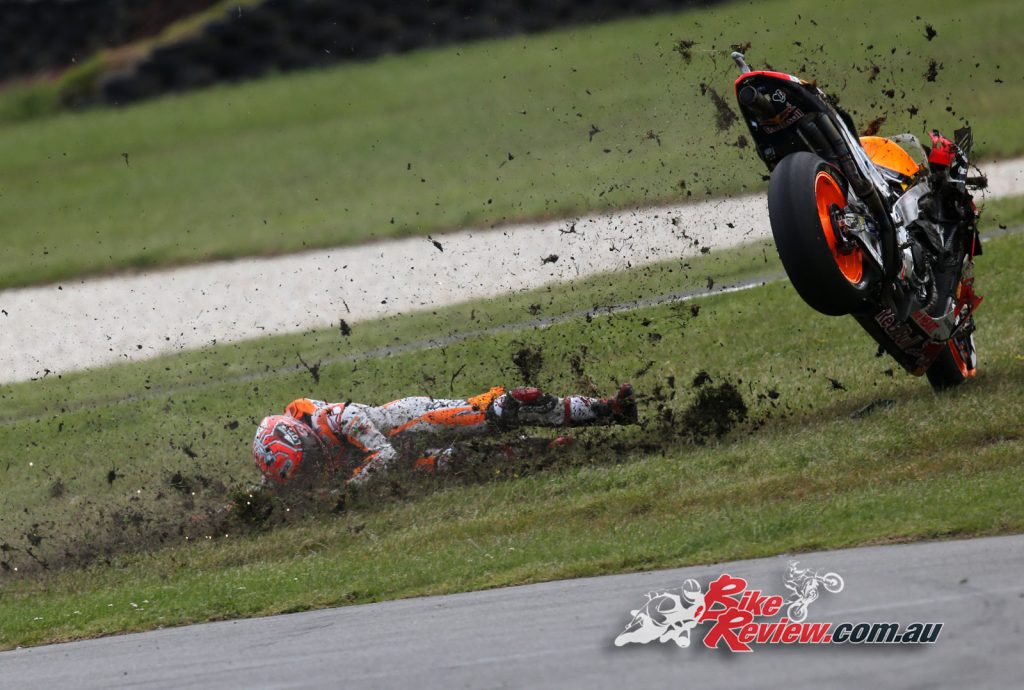 Nearly three seconds clear at the front, there was suddenly a Repsol Honda sliding through the gravel at Turn 4 – and Marc Marquez was out of the Michelin® Australian Motorcycle Grand Prix.

Crutchlow then found himself in the lead, hoping the 2014 flashback for Marquez wouldn’t touch him after a last lap crash two years ago – as Rossi began his hunt for the LCR machine, over two seconds back but on an amazing roll from P15 on the grid.

As the British rider continued pulling away, Rossi then got a warning shot at Turn 4 that saw him run deep and lose ground, as the new fight for the final podium spot saw Aleix Espargaro locked in battle with Dovizioso – and Viñales soon getting involved. 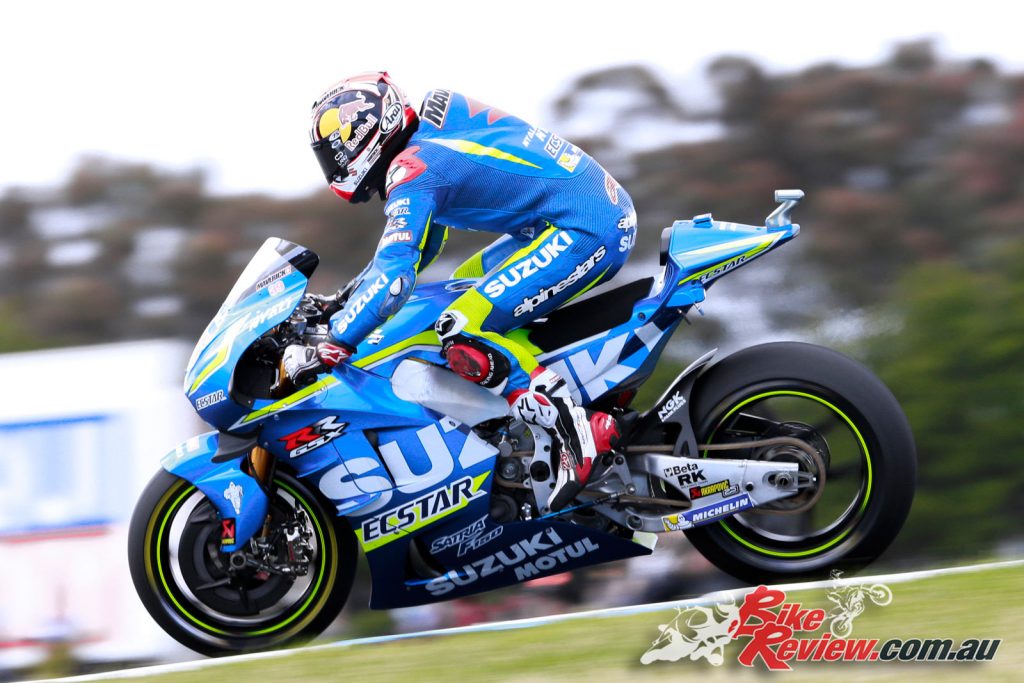 After swapping positions in a three-way fight, Turn 4 then claimed another victim as Aleix Espargaro lost his Suzuki machine with 5 laps to go, and teammate Viñales broke the resolve of Dovizioso to take the final place on the podium and head the Italian home.

After his storming start, Pol Espargaro took a solid result as he crossed the line in P5, ahead of a struggling Jorge Lorenzo – who was unable to make up big ground after his good launch off the line.

‘Kentucky Kid’ Hayden, standing in for injured Dani Pedrosa at Repsol Honda, put in an impressive one-off return to his 2006 championship winning colours as he battled well within the points, before Miller took Turn 4 a little overenthusiastically and Hayden was the casualty, sliding out.

Hector Barbera was another crasher, leaving Redding to lead compatriot Bradley Smith over the line for P7, with the top ten completed by Petrucci and Miller. As well as the solid result for Miller, fellow Australian Mike Jones scored a point on his Avintia Racing machine, impressing once again.

Another Independent Team win in 2016, another win for Cal Crutchlow, and a little glimpse of the old Marquez. A fight back from outside the top ten to make the podium – for both the bikes who crossed the line behind the Brit – and some spectacular racing at Phillip Island once again. Next up is he penultimate round – and another chapter of an incredible 2016.

The pitlane opens in Malaysia at 9:00 local time (GMT +8) on Friday as the grids gear up for a fresh clash at Sepang International Circuit. 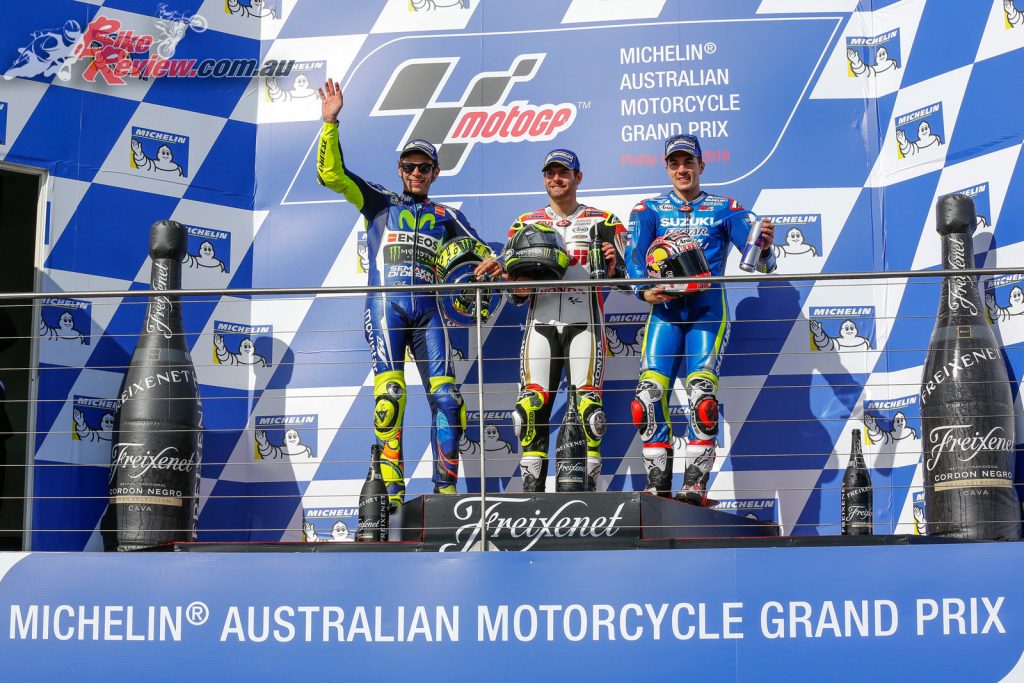 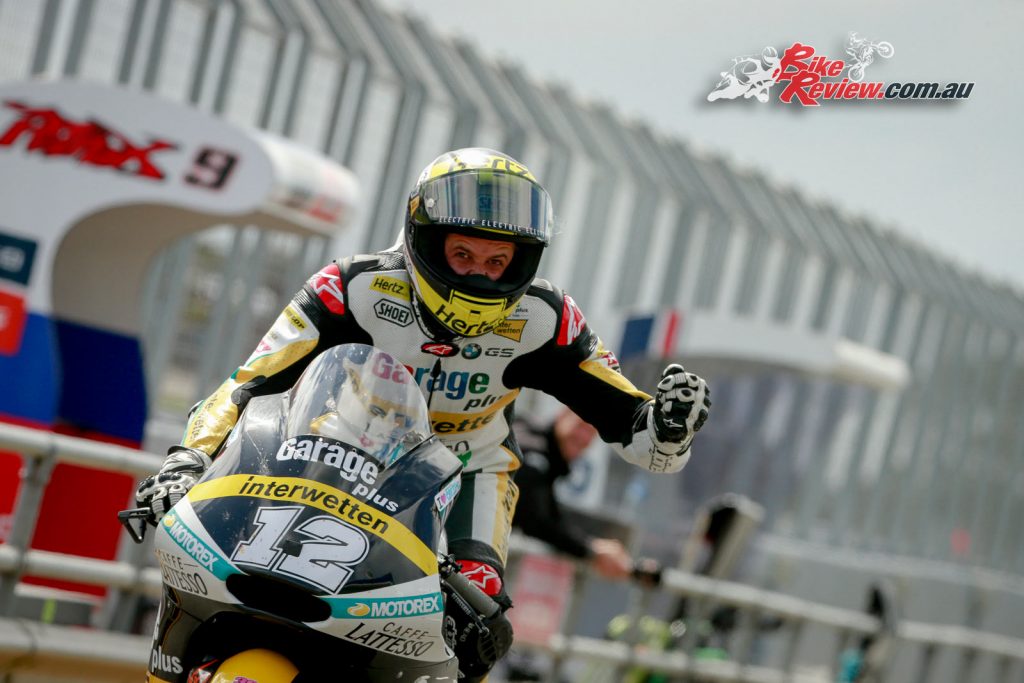 He who dares: Lüthi takes a stunning photo finish

Rins out, Lowes out, and Zarco in P12? Swiss rider sweeps up in Phillip Island to take over P2 in the title fight

Tom Lüthi (Garage Plus Interwetten) has taken his first ever back-to-back victories in the world championship, as he slipstreamed Estrella Galicia 0,0 Marc VDS rider Franco Morbidelli to the line in Australia – overtaking the Italian in a stunning photo finish only a week after his victory at the Twin Ring Motegi.

Dynavolt Intact GP’s Sandro Cortese completed the podium for his first rostrum in over a year, bouncing back from a tough season marred by injury.

Blue skies, good weather and finally a completely dry track at Phillip Island saw Moto2 line up a little late after a dramatic Moto3 race, with Lüthi getting the holeshot from pole and as you were at the front – with a key loser off the line proving Championship leader and reigning Champion Johann Zarco (Ajo Motorsport). As Lüthi then had a big moment, Morbidelli then struck for the lead – but the Swiss rider hit back and the front row set off at the head of the race.

From a tough starting position of P15 for Championship contender Alex Rins (Paginas Amarillas HP40), the Spaniard was up into P6 with 20 laps to go – with Zarco back in P13 – as he attempted to cut the Frenchman’s 21 point lead ahead of the Australian GP.

Then Sam Lowes (Federal Oil Gresini Moto2) was the first big name to crash out – rider ok – as the Brit suffered his fifth fall of the weekend early on, before Rins saw his title chances take another big hit as he ended up in the gravel soon after.

The front group of Lüthi, Morbidelli and Pasini remained clear in the lead, with the three keeping pace with each other – and Lüthi, P3 in the Championship, seeing his “Rins – out” pit board. As the three remained in the 1:34 laptimes, Zarco began to drop back through the field – in P14 by 11 laps to go.

After a strong turn of pace at the start, Jonas Folger (Dynavolt Intact GP) fell back into the clutches of Misano winner Lorenzo Baldassarri (Forward Racing), with the Italian taking over in P4 and Folger holding on in the top five – until Takaaki Nakagami (Idemitsu Honda Team Asia) and Folger’s teammate Sandro Cortese overhauled the Brno winner.

Cortese continued his stunning pace and ride through the field to take the podium, with Nakagami fading slightly as he felt the effects of his highside crash in Qualifying – and Pasini falling out of contention at Turn 4.

Baldassarri finished P4, ahead of Nakagami by the flag as Folger held on to P6. Simone Corsi (Speed Up Racing) had a solid ride to P7, with Axel Pons (AGR Team) taking eighth ahead of an impressive performance from Xavi Vierge (Tech 3 Racing), who came home in ninth. Marcel Schrotter (AGR Team) completed the top ten.

With Lowes and Rins both crashing out, and Zarco down in P12, Lüthi was the big winner in Phillip Island – cutting his deficit in the title fight significantly as the penultimate round of the year at Sepang International Circuit approaches. He took over in P2 in the title, now only 22 points down, and showed the adage can be true – he who dares really can sometimes win. 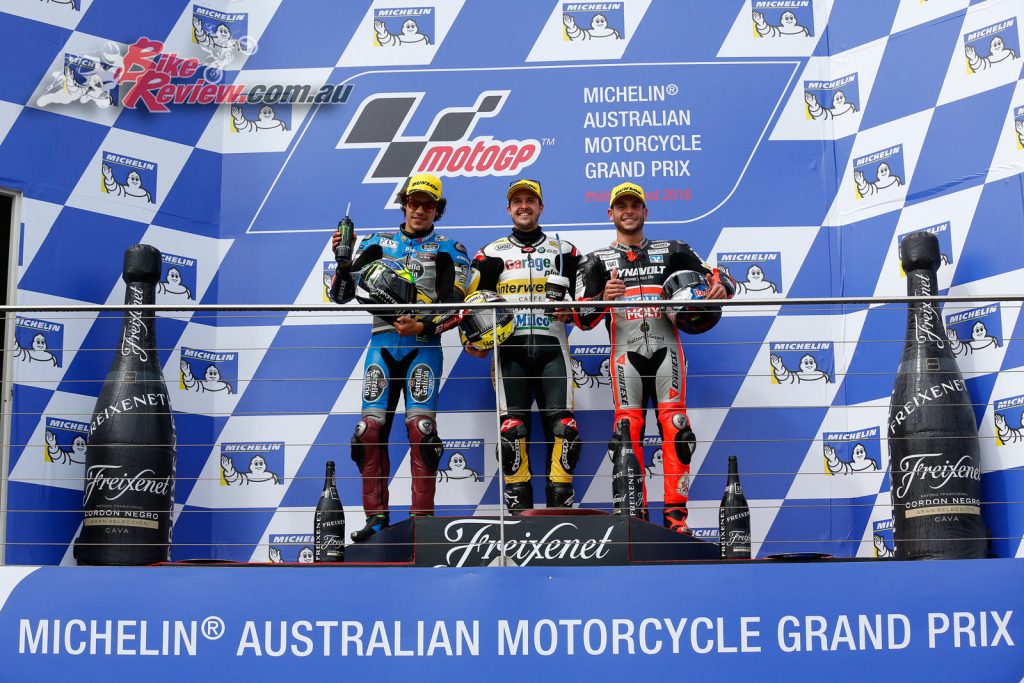 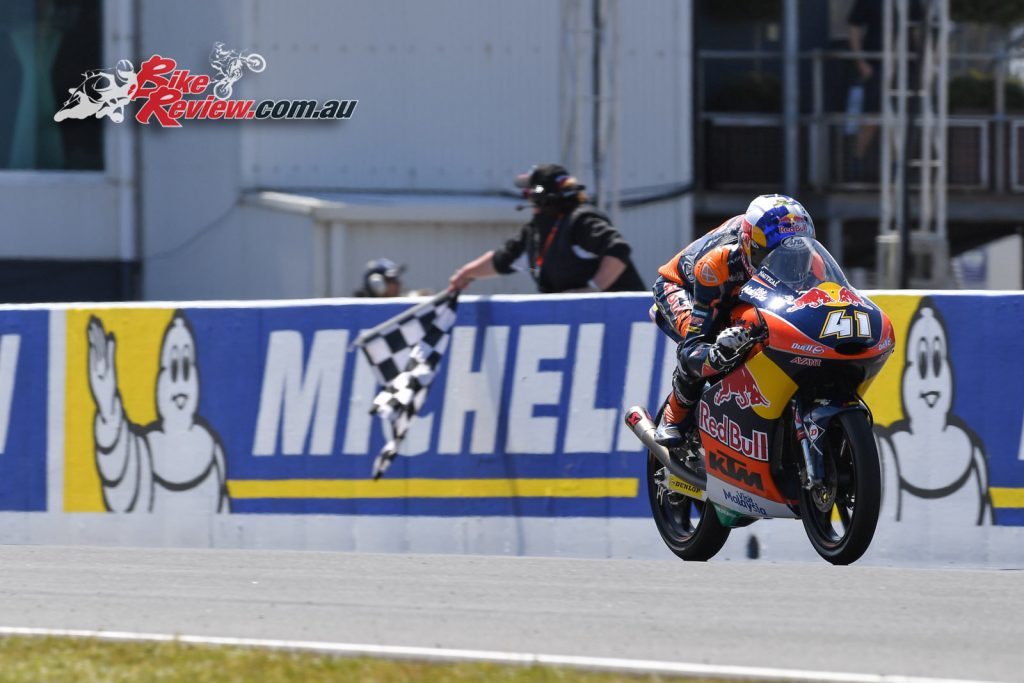 Binder wins a battle of attrition at Phillip Island

After a weekend of rain, wind and grey skies, Sunday finally dawned bright at Phillip Island, and Warm Up saw laptimes lower for the majority after a mixed Saturday – as the skies remained perfect blue above the Moto3™ grid lining up to race.

An original race saw crashes early on for some of the frontrunners – including key protagonists of the Rookie of the Year battle Joan Mir (Leopard Racing) and Nicolo Bulega (Sky Racing Team VR46) – with a crash at Lukey Heights then seeing John McPhee (Peugeot MC Saxoprint) crash out and collect a number of other riders – including Jorge Navarro (Estrella Galicia 0,0) and Enea Bastianini (Gresini Racing Moto3). The red flag came out, with a re-started race set for a distance of ten laps.

Bastianini was unable to make the restart, but Navarro lined up once again for the new race – as did Fabio Quartararo, with the Frenchman once again starting form the back after having been disqualified from his P2 qualifying position due to a technical infringement. Having fought up into second before the red flag, the Leopard Racing rider then faced the prospect of doing the task all over again.

The restart saw Binder and Locatelli escaping at the front, before the South African 2016 Moto3™ World Champion began to pull away, leaving Locatelli in a lonely P2. Further back, the battle for third saw riders heading into Doohan Corner eight wide, with the classic Moto3™ freight train creating a 16 rider battle to complete the podium.

Quartararo was unable to repeat his heroics from before the race start, and there were further crashers who then were out of podium contention – including Jorge Navarro after a touch from Bo Bendsneyder (Red Bull KTM Ajo), and Turn 4 casualty Niccolo Antonelli (Ongetta-Rivacold).

Brad Binder’s younger brother Darryn (Platinum Bay Real Estate) then saw the penultimate lap of the race become a duel for the podium with Aron Canet as the two broke free from the group slightly. Canet just took the honour with a slipstream over the line, with Darryn Binder nevertheless taking his career best finish in P4.

Third down to tenth was covered by just over seven tenths of a second in the incredible battle – with Fabio Quartararo in P12 still within a second of the podium.

With DNFs for so many of those in the top echelons of the points standings, Binder stretched his lead in the Championship – although already crowned Champion – with Bastianini and Navarro not scoring in the fight over P2, and all three riders locked in the battle for Rookie of the Year – Mir, Fabio Di Giannantonio (Gresini Racing Moto3) and Bulega – were also all unable to see the flag.

Another incredible battle will see Moto3 take over Sepang International Circuit next weekend, as the slipstream specialists take on the incredible final straight, Turn 15 and main straight combination – with a new track surface and some new cambers. 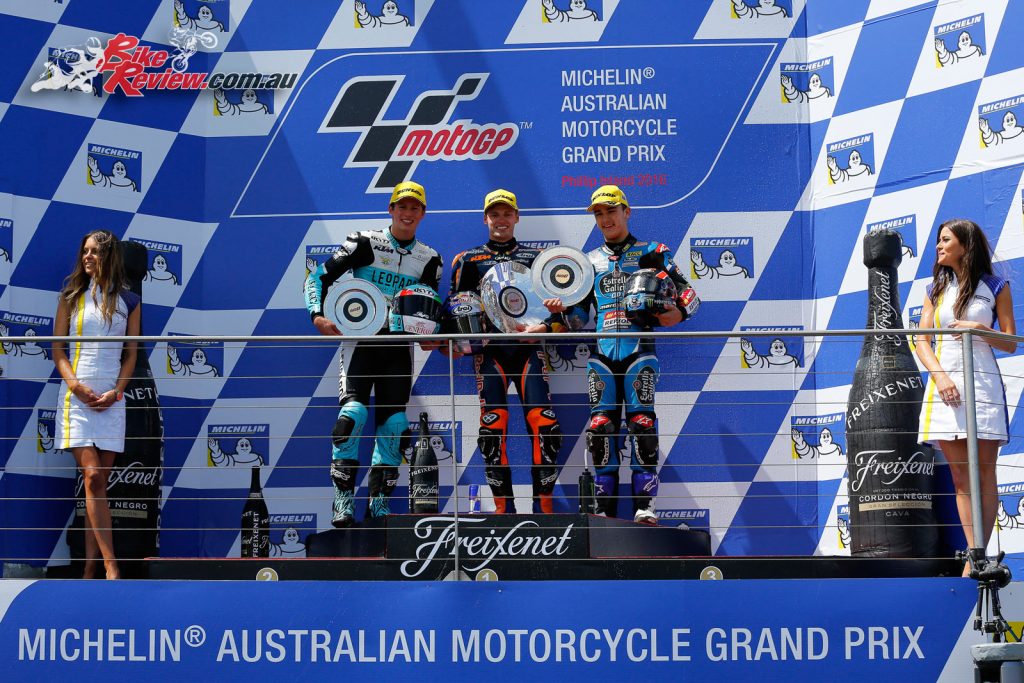