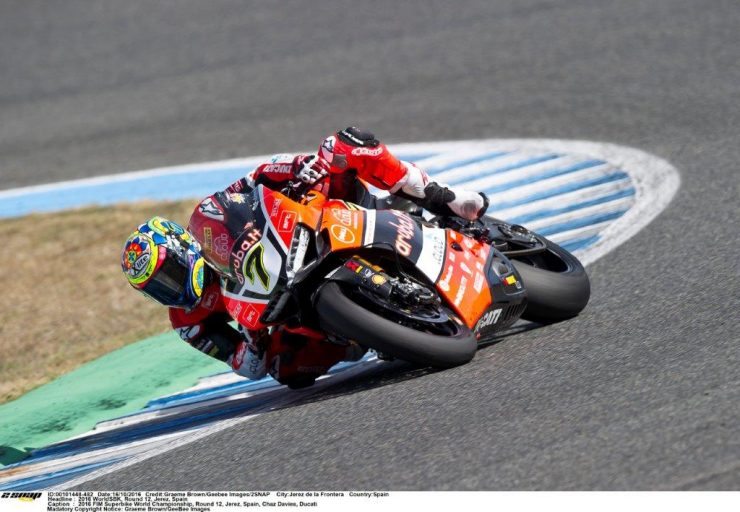 Davies makes it a double for Ducati at Jerez 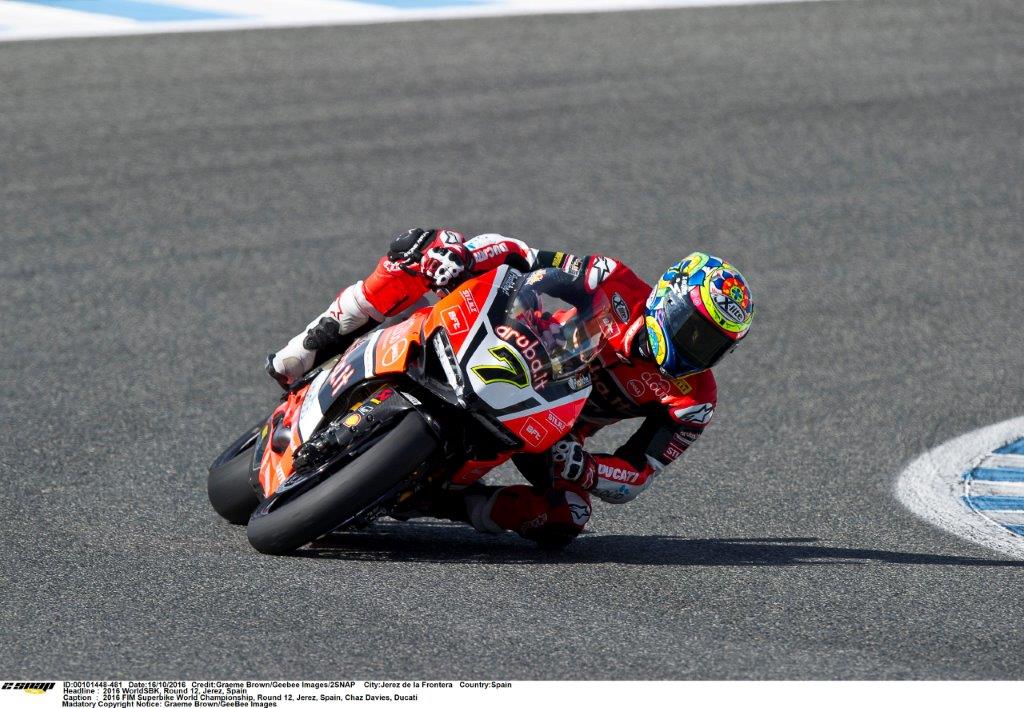 The Davies domination also prevented foe, Rea, from sealing another WorldSBK title victory with the North Irishman to continue his charge in Qatar in two weeks.

Welshman Davies had an incredible start storming straight through to fourth by the first corner, but it was Sykes who led with Rea close behind in second. By the end of the first lap, the Ducati rider had already shot to the front and began to build his lead.

The Kawasakis then battled it out for the remainder of the race together, with Rea trying to hunt down his second world title. The lead swapped and changed between the championship contenders but the reigning world champion couldn’t shake off Sykes to take the crown, which he still leads by 48 points.

By the end of the race, fourth-placed Nicky Hayden (Honda World Superbike Team) had caught up to the KRT duo to fight it out for the podium, but he narrowly missed out as Sykes took third behind his teammate Rea in second. As a result, the 2016 championship could not be won at the Jerez and the Northern Irishman will need to wait until the last round at Qatar as he works to add another title to his belt.

Alex Lowes (Pata Yamaha Official WorldSBK Team) finished in seventh ahead of Jordi Torres (Althea BMW Racing Team) who was the first Spaniard home in eighth. Torres battled with fellow Spaniard Xavi Fores (Barni Racing Team) earlier on in the race to break into the top ten. Unfortunately for Fores, his race ended early after technical issues forced him to retire.

Davide Giugliano (Aruba.it Racing – Ducati) finished in P13, which was a solid effort considering he struggled with his recovering shoulder throughout the weekend. Althea BMW Racing Team’s Markus Reiterberger finished in P14 with Gianluca Vizziello (Grillini Racing Team) picking up a point in P15.

The 2016 MOTUL FIM World Superbike Championship will now be decided in the final round of the season at Qatar on the 28th to the 30th of October, with Jonathan Rea leading the charge to the 2016 crown. Many of the teams will remain in Jerez Monday for a one day test before machinery is shipped to the UAE. 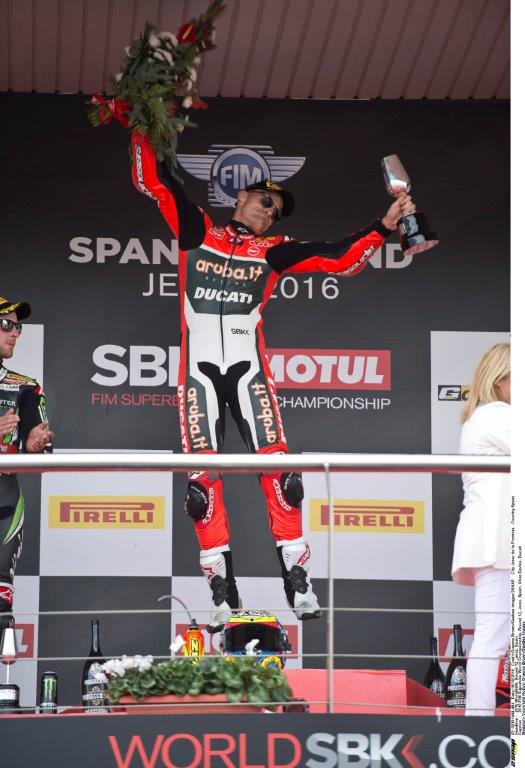 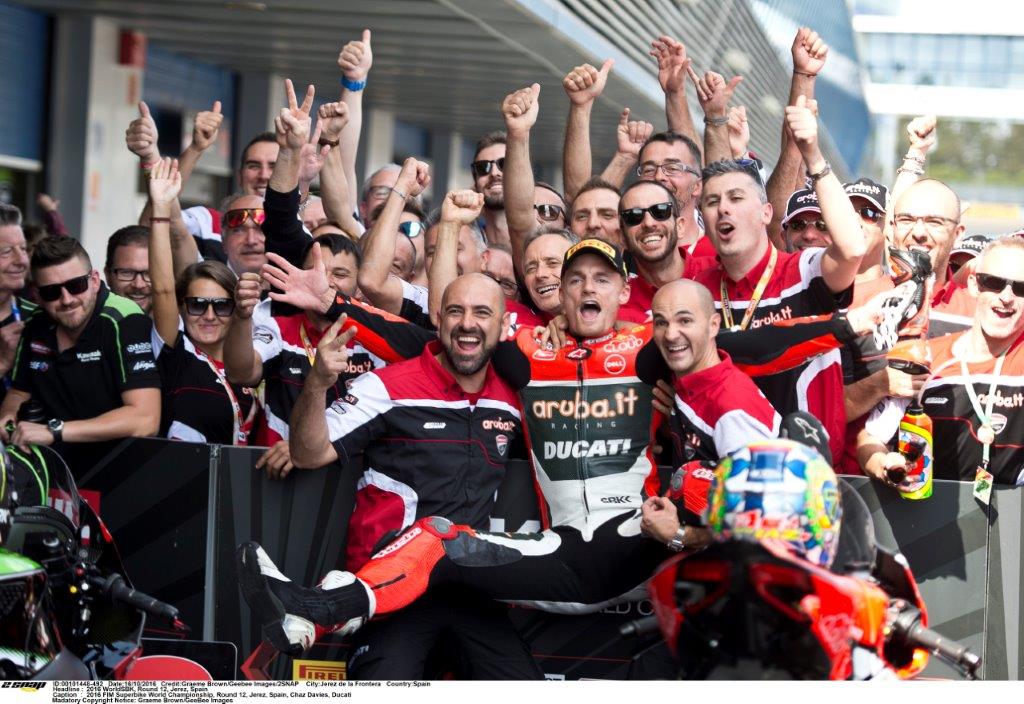 Race 1 at the Gaerne Spanish Round saw Chaz Davies (Aruba.it Racing – Ducati) decimate the field by over three seconds, while a podium for the Kawasaki Racing Team duo was enough for the Japanese marque to secure the Manufacturers Award.

Jonathan Rea (Kawasaki Racing Team) led into the first corner from P2 on the grid, with teammate Tom Sykes and Alex Lowes (Pata Yamaha Official WorldSBK Team) close behind. However it wasn’t long until Davies moved in on Lowes to begin his hunt for the win.

Nicky Hayden (Honda World Superbike Team) didn’t get an ideal start after a wheelie off the line slowed him considerably, however he made up for it by setting a fastest time on lap three as he worked his way up into the top five.

The early laps saw many riders end their races with the first victims of the Circuito de Jerez being Luca Scassa (VFT Racing) and Saeed Al Sulaiti (Pedercini Racing) on the opening lap.

Xavi Fores (Barni Racing Team) and Davide Giugliano (Aruba.it Racing – Ducati) were next when they both crashed out at turn 1 on lap two. On the next lap Lowes crashed out at turn 5, before Ant West (Pedercini Racing) slid out but the Australian was able to rejoin at the next corner.

Once Davies got in front it was impossible for the Kawasakis to match his pace. Sykes, who finished second, gained important championship points to help close in on his title leading teammate Jonathan Rea, who finished third.

The first Spaniard home was Jordi Torres (Althea BMW Racing Team) who finished in eighth ahead of his teammate Markus Reiterberger in ninth.

Eventually, Brookes won the battle to finish in tenth with De Angelis in P11, Ramos in P12 and Savadori in P13. Ant West came home in P14 while Peter Sebestyen (Team Toth) picked up his first point of the season in P15. 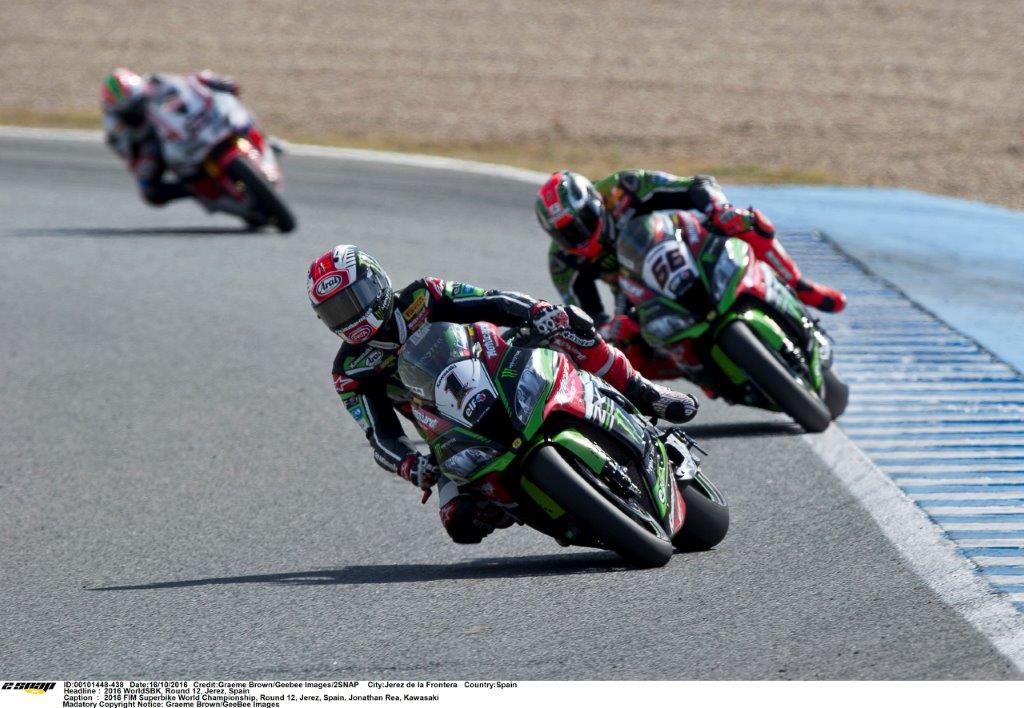 Kawasaki duo in pursuit of Davies 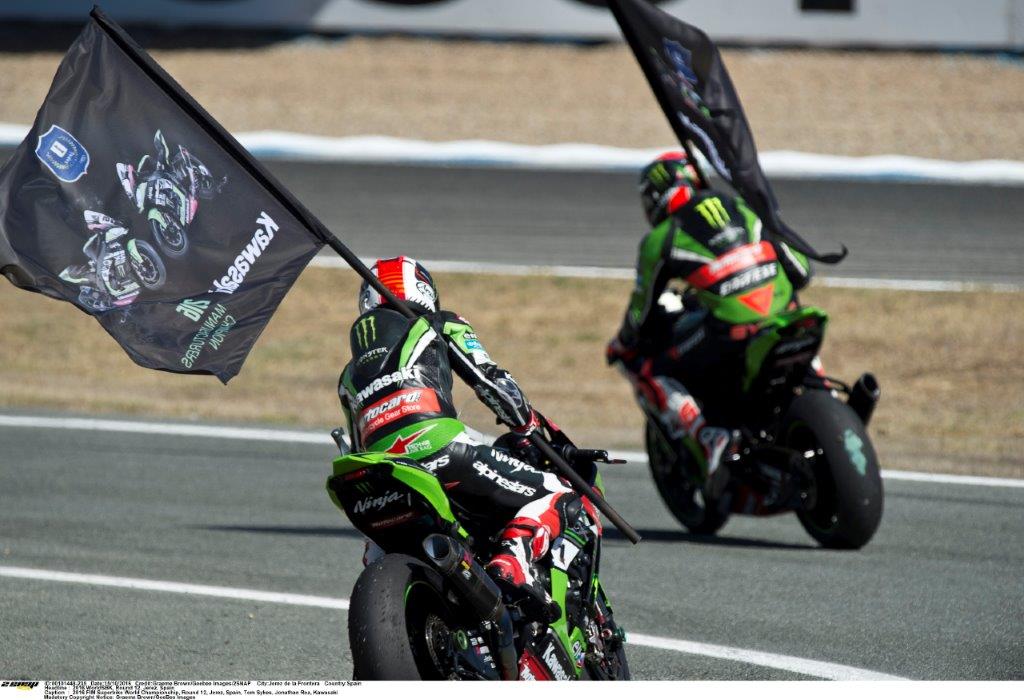 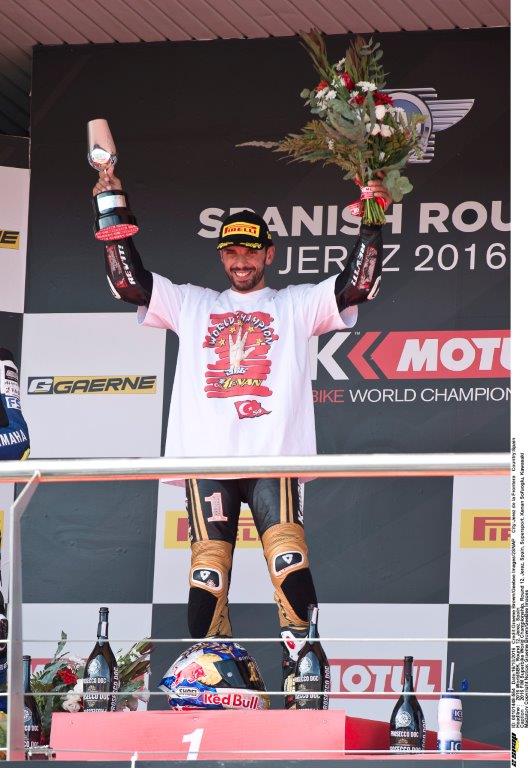 Turkish hero, Kenan Sofuoglu, won the WorldSSP race at Jerez and was crowned the 2016 FIM Supersport World Champion just five laps into Sunday’sbattle at Jerez, after his Kawasaki Puccetti Racing Teammate Randy Krummenacher crashed out of contention for the title.

Thirty-two year old Sofuoglu is the only rider in history to win the WorldSSP Championship five times, with back-to-back titles over the 2015 and 2016 seasons, and earlier title victories in 2007, 2010 and 2012. His fifth title win makes him the most successful WorldSSP rider in history.

Sofuoglu had to fight hard for the victory as Kallio Racing Team’s Niki Tuuli and CIA Landlord Insurance Honda’s Kyle Smith tried everything they could to beat the Kawasaki Rider at his own game. But experience won out and the duo were unable to match his incredible pace. 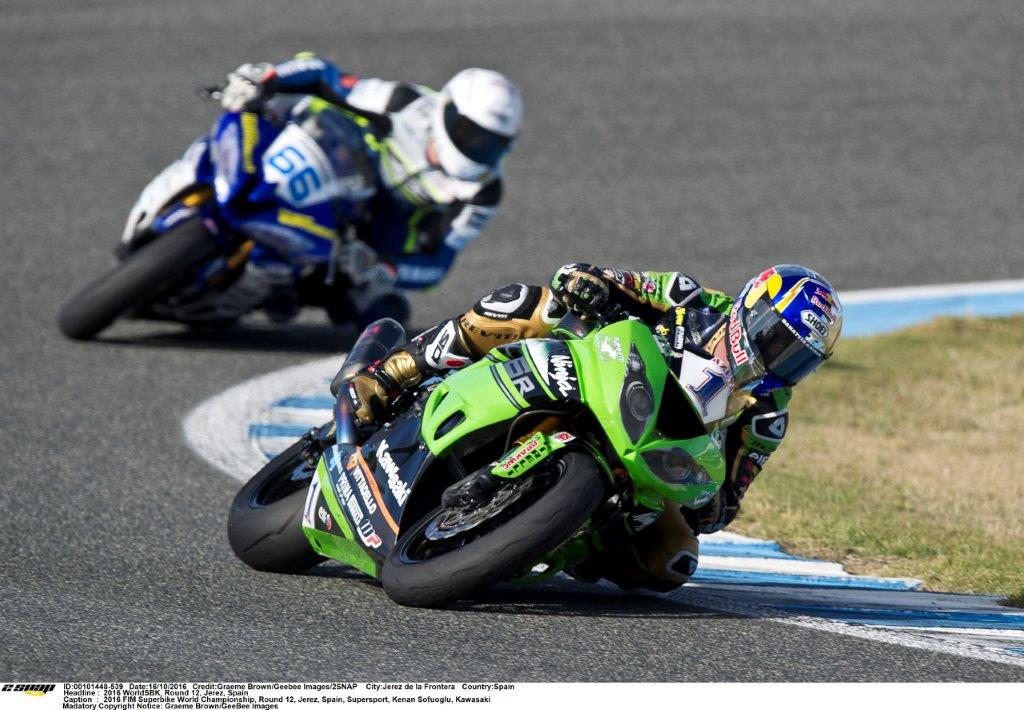 Kenan Sofuoglu on his way to WorldSSP championship win number 5

Sofuoglu had the holeshot and led from the first corner, focused only on winning his fifth title. Krummenacher who was running in second, attacked at every opportunity to get in front of Sofuoglu.

The first few laps saw the lead switch between the two Kawasakis before Krummenacher became undone at turn one and slid out on lap five. He wasn’t able to continue and officially retired from the race on lap nine, with Sofuoglu automatically being declared champion of WorldSSP.

The young Italian was able to hold off his world supersport challengers and was able to finish in fifth, after Federico Caricasulo (BARDHAL Evan Bros. Honda Racing) crashed out in the final laps. By being the first ESS rider home, Bassani won the FIM Europe Supersport Cup.

Thanks to Sofuoglu’s win, Kawasaki were named Manufacturers’ Champions of the WorldSSP category, joining their WorldSBK counterparts who won the award on Saturday at Jerez.

Though the championship has been decided, WorldSSP isn’t over just yet. The field now heads to Qatar for the final round of the 2016 season on the 28th to 30th of October. 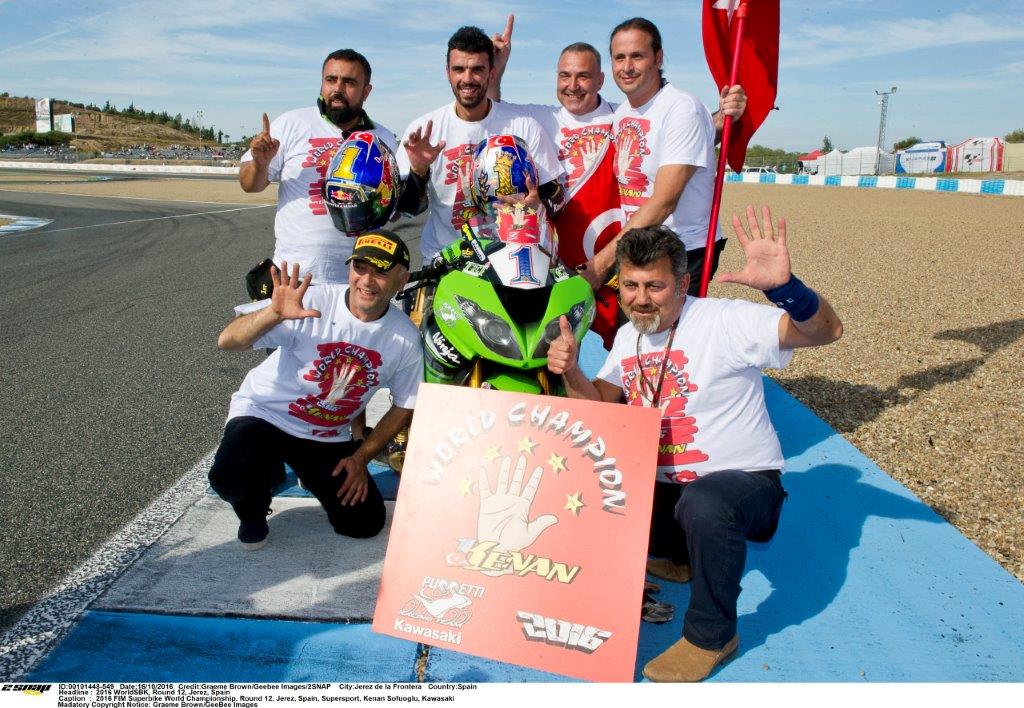