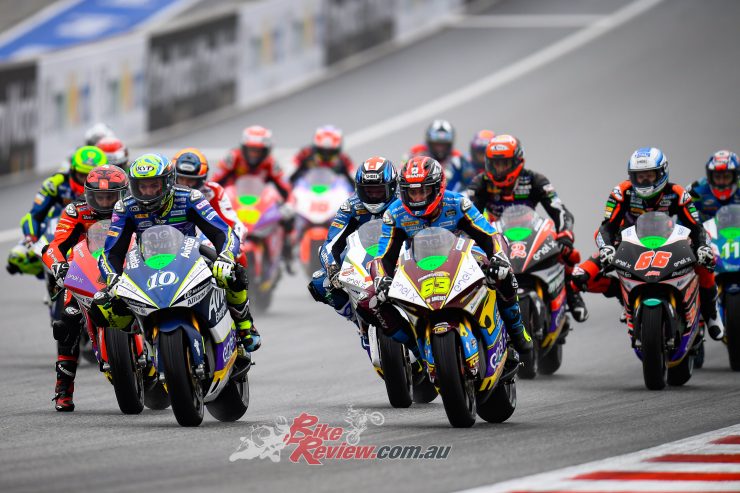 Round two of the FIM Enel MotoE™ World Cup certainly didn’t disappoint with EG 0,0 Marc VDS’ Mike Di Meglio mastering the wet conditions at the myWorld Motorrad Grand Prix von Österreich to take victory, over a decade on from his last triumph in 2008. The Frenchman was joined on the podium by Xavier Simeon (Avintia Esponsorama Racing) and Bradley Smith (One Energy Racing) as a handful of title favourites crashed. 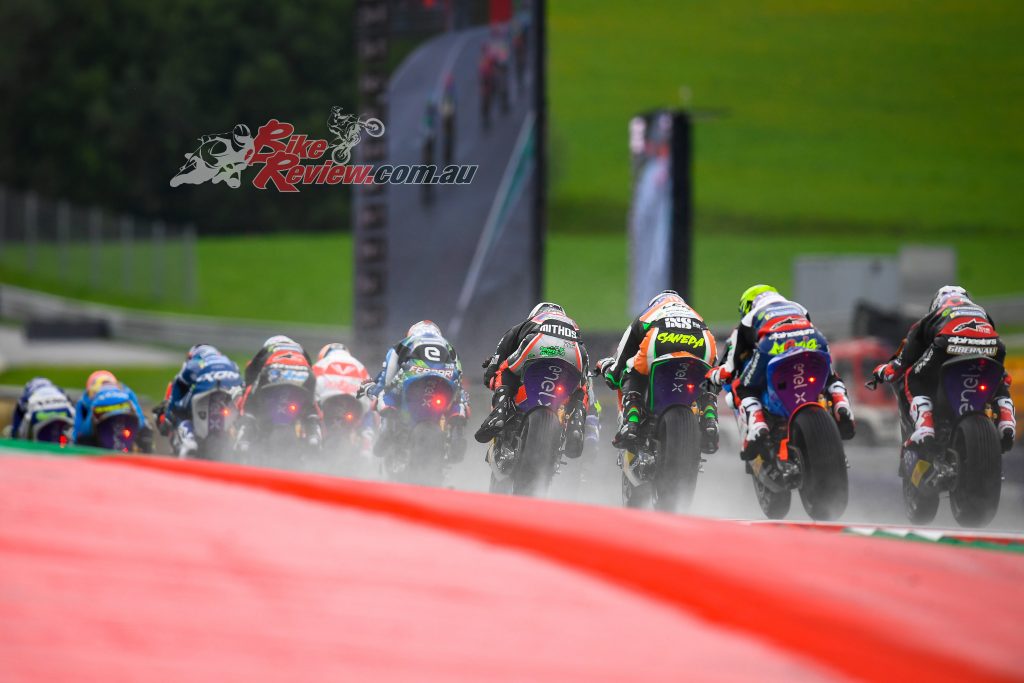 The race was reduced to five laps due to rain falling at the Red Bull Ring and once round two got underway, it was Simeon who took the holeshot from second on the grid. Poleman, Di Meglio, retaliated immediately though, drafting his way past the Belgian on the run into Turn 3.

The fight for third was too close to call, with five riders all aiming for the same bit of track through Turn 3 as Eric Granado (Avintia Esponsorama Racing) came out on top. Then the first bit of drama would unfold as the inaugural MotoE race winner and World Cup leader Niki Tuuli (Ajo MotoE) ran wide into Turn 4 and into the gravel trap. Smith also made an error into Turn 4 and a result slipped down to ninth. 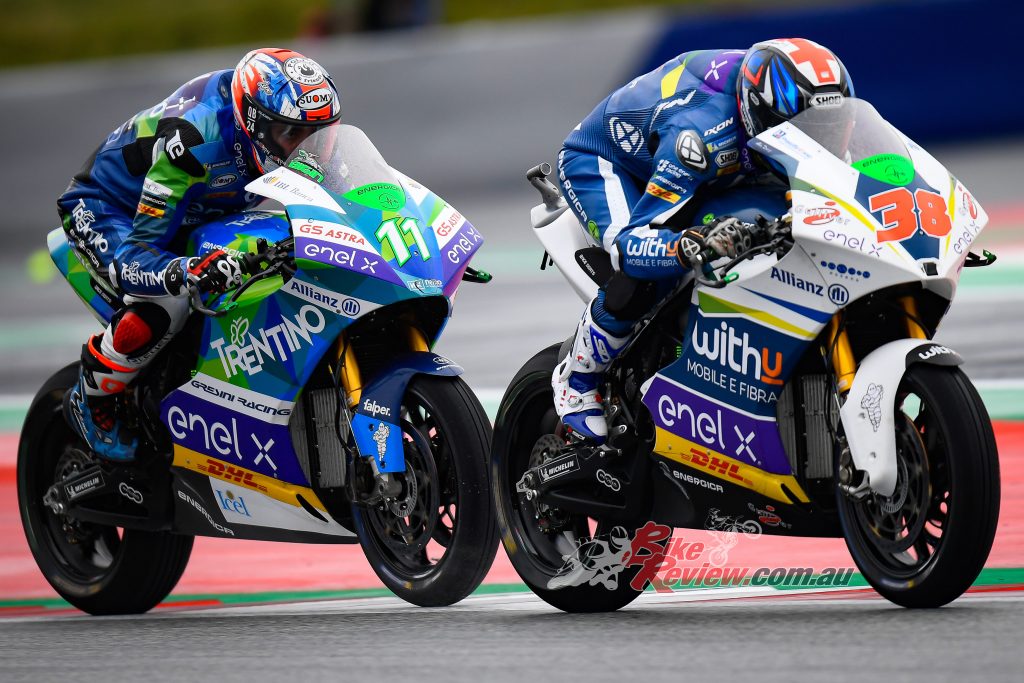 Brazilian Granado continued to make progress through, having started ninth on the grid, and momentarily took second away from teammate Simeon before a big moment allowed the Belgian to retake the position. It wouldn’t be for long though as Granado bounced back, first retaking second and then the lead at the start of the second lap.

He began to break clear, seemingly having the edge on everybody else in the difficult conditions but then disaster struck. On lap three, on the brakes into Turn 3, the front end washed from beneath him and hopes of a first MotoE™ victory ended. 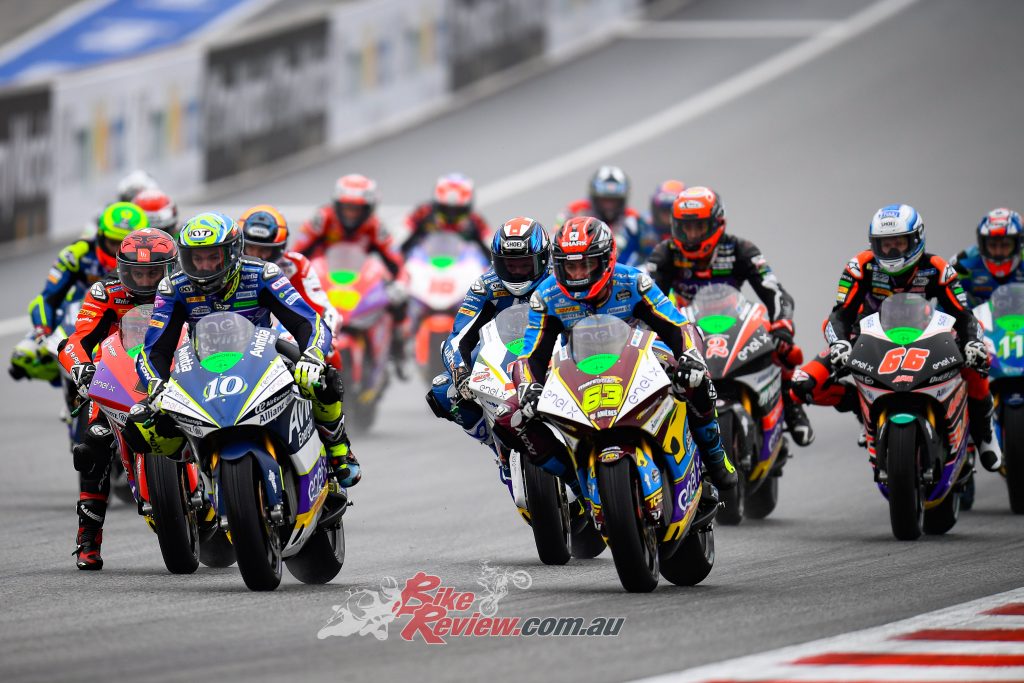 Di Meglio retook the lead as a result, whilst behind Tech 3 E-Racing’s Hector Garzo and Simeon would go elbow to elbow in the fight for second place, with Garzo coming out on top by rolling around the outside into Turn 9. With just two laps left, Garzo set his sights on Di Meglio, who by this stage was a second clear.

Behind, Smith had battled his way through to fourth following his lap one error as he tried to recoup as many valuable points as he possibly could. As the leaders started the final lap, Di Meglio’s lead was cut in half as a last-lap lunge from Garzo began to look increasingly likely. That was, however, until the Spaniard crashed out at Turn 4 and subsequently handed the 25 points and the second-ever MotoE™ victory to 2008 125cc World Champion, Mike Di Meglio. 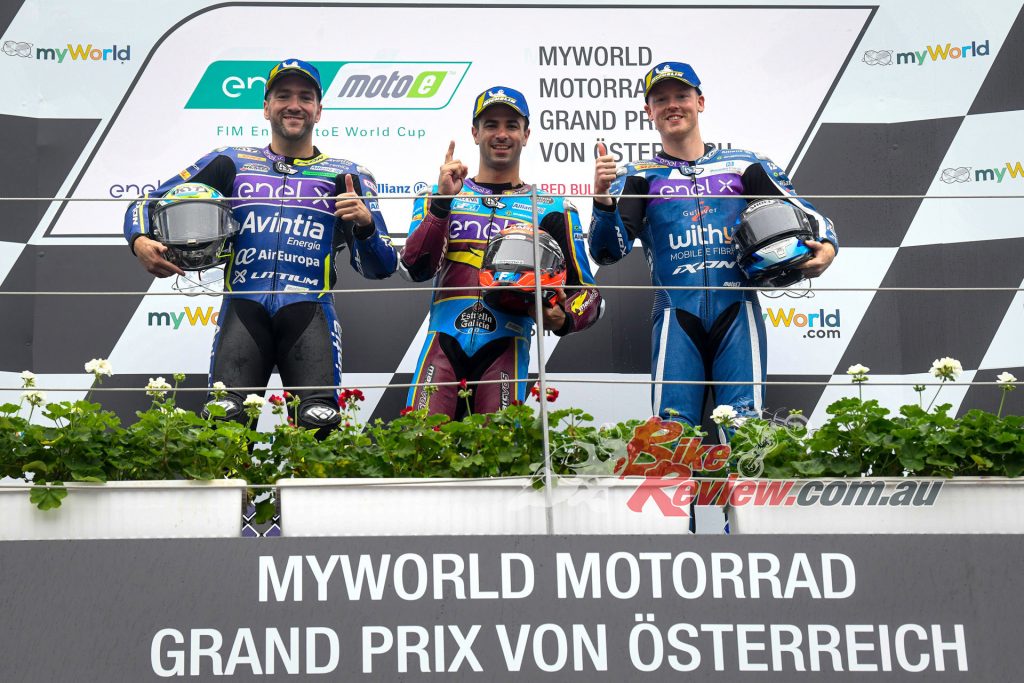 Simeon held on to take second place and a first visit to a Grand Prix podium since 2015, whilst Smith kept himself in title contention after a second podium of the World Cup in third. Frenchman Di Meglio now heads to the third round at the San Marino Grand Prix as the title leader after Tuuli could only manage a solitary point, five points clear of Smith.

Alex De Angelis (OCTO Pramac MotoE) took fourth, a tenth clear of compatriot Matteo Ferrari (Trentino Gresini MotoE). A best ride of the season from Sete Gibernau (Join Contracts Pons 40) saw the former MotoGP™ star battle his way through from twelfth on the grid to sixth. Josh Hook (OCTO Pramac MotoE) ended seventh with Niccolo Canepa (LCR E-Team) in eighth. Jesko Raffin (Dynavolt Intact GP) was given a penalty for passing under yellow flags and was demoted a place to ninth, ahead of Lorenzo Savadori (Trentino Gresini MotoE), who completed the top ten.