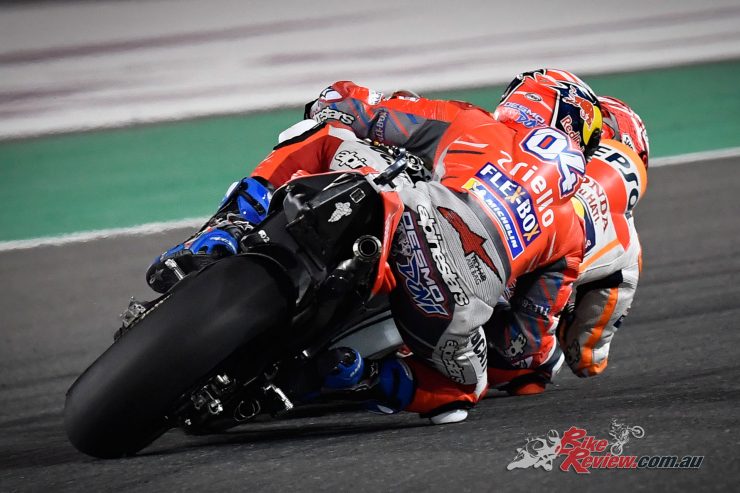 Dovi vs Marquez lights the fuse at Losail

Opening the season with a sensational last lap performance, Andrea Dovizioso (Ducati Team) beat Marc Marquez (Repsol Honda Team) to the line at the Losail International Circuit by just 0.027s, lighting the fuse on 2018 from the very first race. And the ‘Doctor’ Valentino Rossi (Movistar Yamaha MotoGP) completed the podium, putting in another Sunday stunner from Row 3 of the grid.

Frenchman Johann Zarco (Monster Yamaha Tech 3) shot off pole position to take the lead into the first corner but there was nothing to split the top ten riders in the opening laps, and it looked as if any one of them could fight for the victory throughout the 22-lap thriller. With fastest laps flying in on each lap, Zarco was still able to keep hold of the lead. 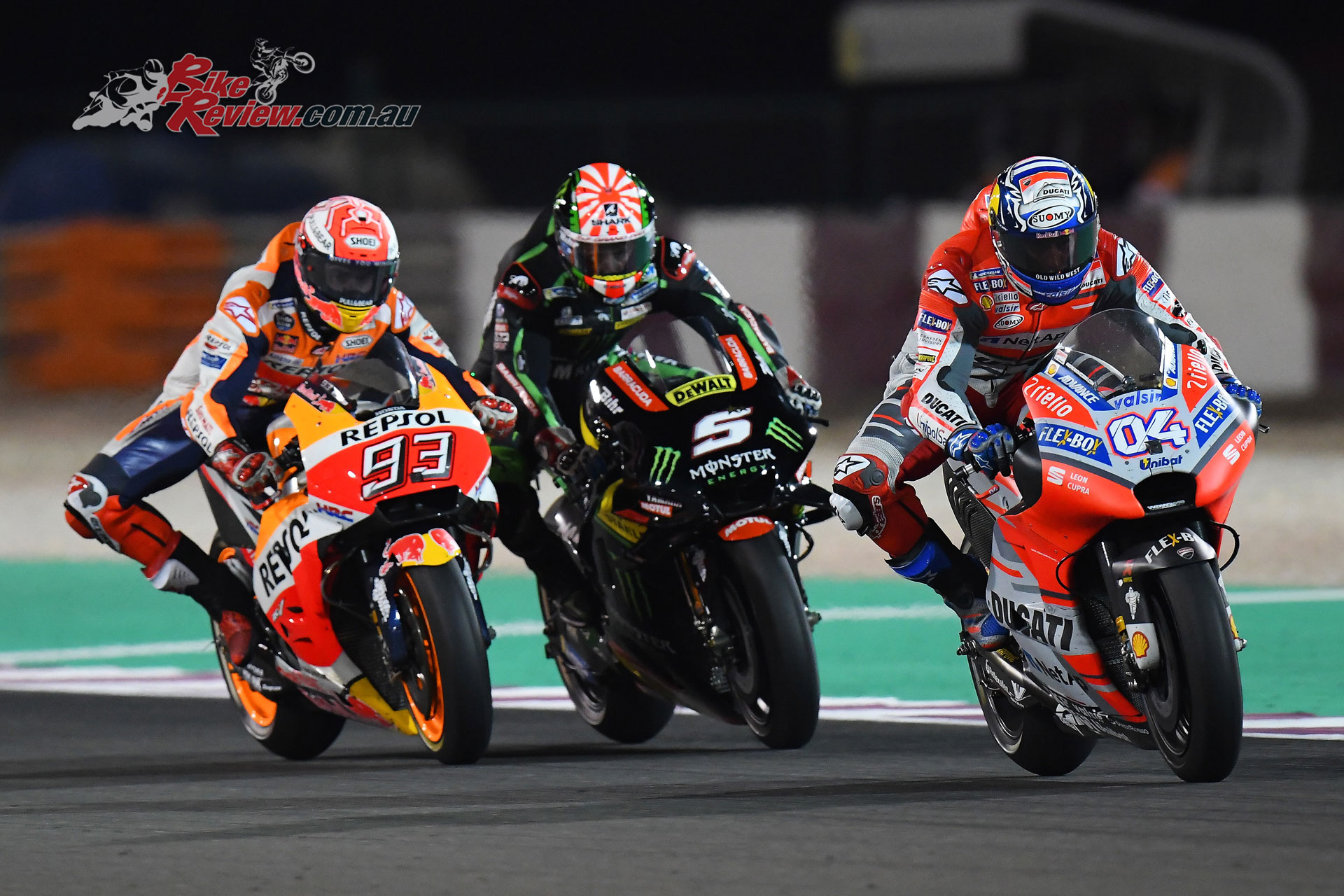 With big battles taking place behind him, the French rider kept calm at the front whilst Rossi made his way through the field to get into podium fighting positions by the third lap, hunting down his fellow Yamaha in the lead. Marquez was never far away from the fight, sitting in the top five as soon as the lights went out. As ten laps had been completed riders were getting into a rhythm, but you could sense action was on the horizon.

Silent assassin Dovizioso moved up to third position on lap 11 as he spent the start of the race working through the field, passing his countryman Rossi who slipped back to the riders fighting for fifth. A clear battled had now developed for the podium, with Dovizioso and Marquez closing in on Zarco and they were able to make their move on the 18th lap, with Zarco losing two positions into the opening corner – as Dovizisoso took the lead. 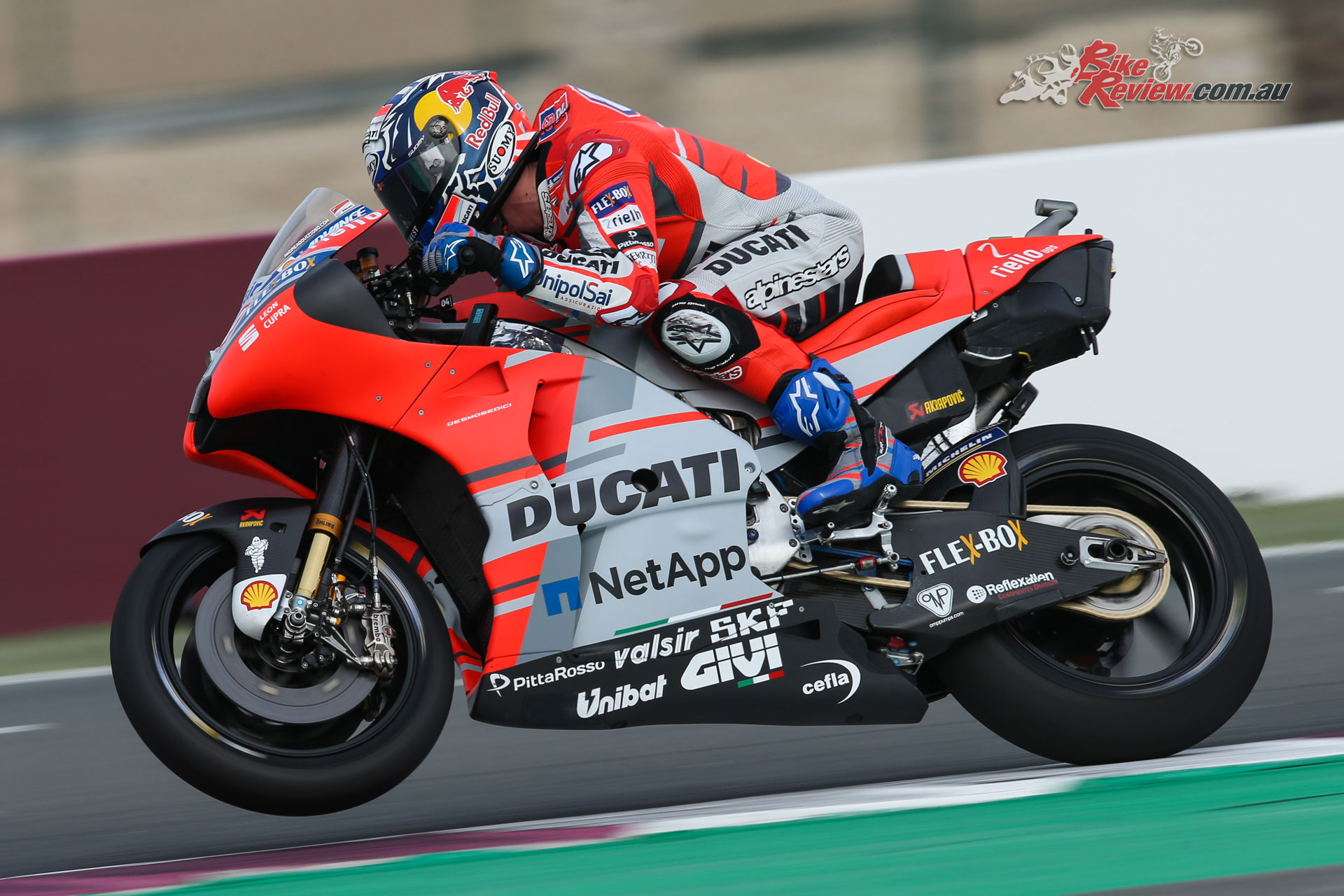 Dovizioso and Marquez then began to break away, pushing themselves to the final corner of the final lap – taking no prisoners. Reigning world champion Marquez made his move through turn 15 but he was unable to make it stick, and Dovizoso led into the final corner meaning he was able to slingshot his Desmosedici over the line, 0.027s ahead. Another last lap showdown, and another Dovizioso victory in style.

Behind the duo, Rossi fought off his rivals to secure a safe third position ahead of top independent rider Cal Crutchlow (LCR Honda Castrol), whilst Danilo Petrucci (Alma Pramac Racing) made some strong moves on the closing laps to complete the top five. 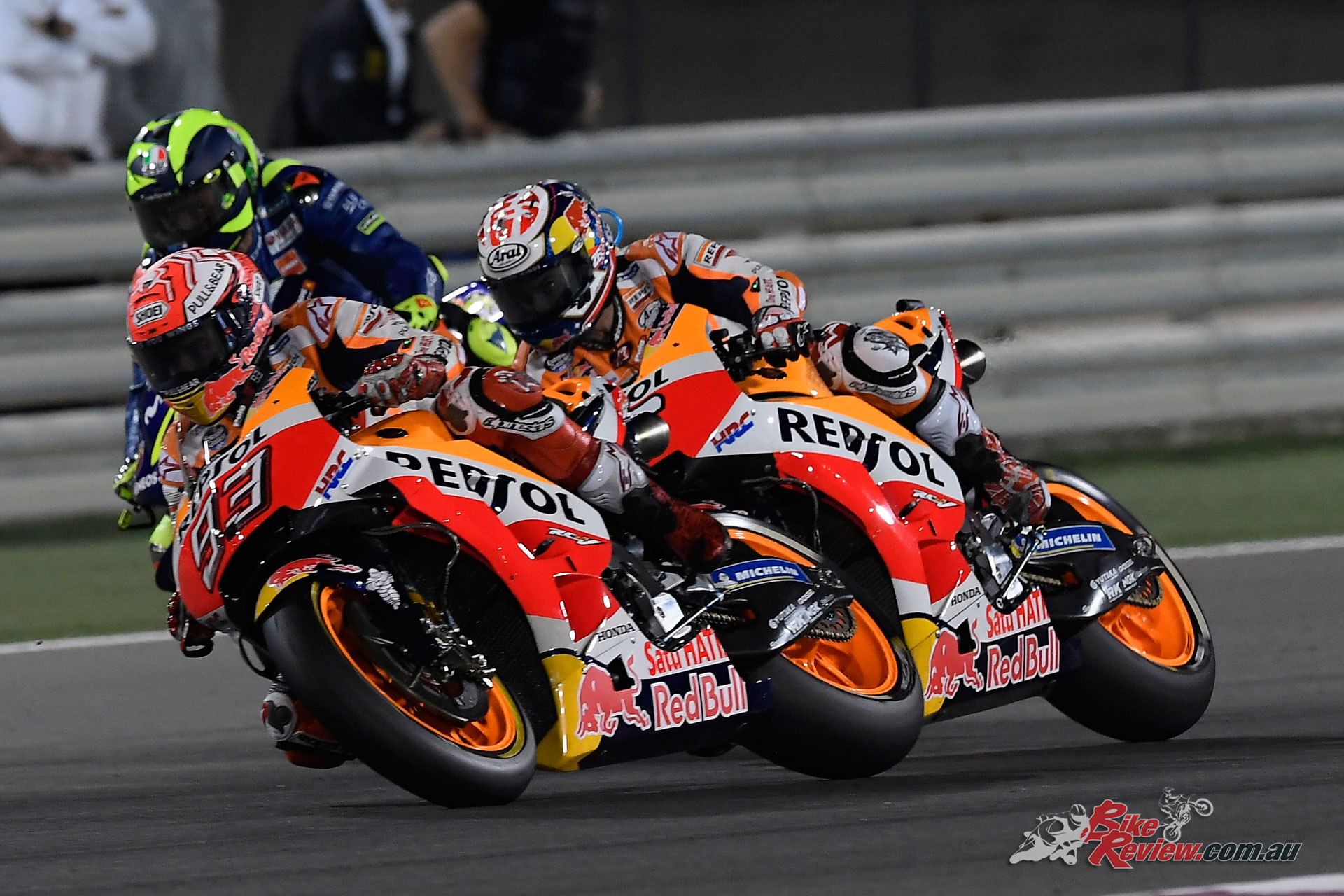 Marquez and Dovizioso battled it out, with Rossi closing the gap at the tail end of the race

Comeback king Maverick Vinales (Movistar Yamaha MotoGP) crossed the line in sixth after being down in 14th on the opening lap, just ahead of Dani Pedrosa (Repsol Honda Team), who made his 200th start in the premier class. Early race leader Johann Zarco (Monster Yamaha Tech 3) crossing the line in eighth after struggling more in the latter stages, with Andrea Iannone (Team Suzuki Ecstar) and Jack Miller (Alma Pramac Racing) completing the top ten. 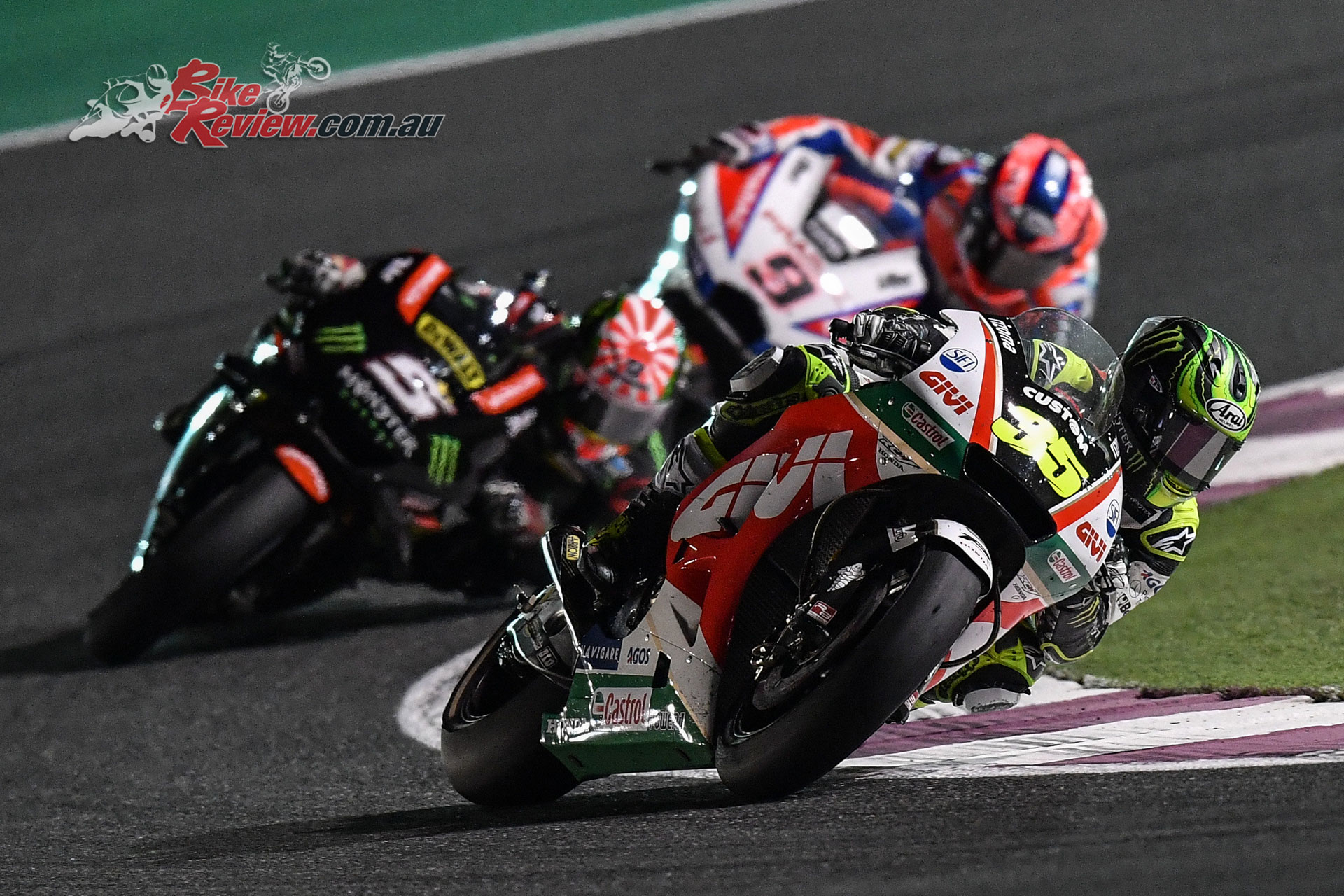 It was a bad start to the season for Alex Rins (Team Suzuki Ecstar), who crashed out of the top six fight on the 13th lap at turn two, whilst Jorge Lorenzo (Ducati Team) had a start to 2018 to forget and the Spaniard crashed out on the same lap – finding his brakes unresponsive at turn 16.

The paddock will now pack up and head to Argentina from 6th – 8th April for the second round of what is set to be a phenomenal MotoGP™ season – and the fuse is already lit.

Francesco Bagnaia (SKY Racing Team VR46) took a sensational maiden victory in the Grand Prix of Qatar, beating his compatriot Lorenzo Baldassarri (Pons HP40) to the line as the victory was decided on the final lap under the floodlights. The 2017 rookie of the year secured his team’s debut victory in the class and began his season in the best possible way, as Alex Marquez (EG 0,0 Marc VDS) rounded out the podium despite some brake issues. 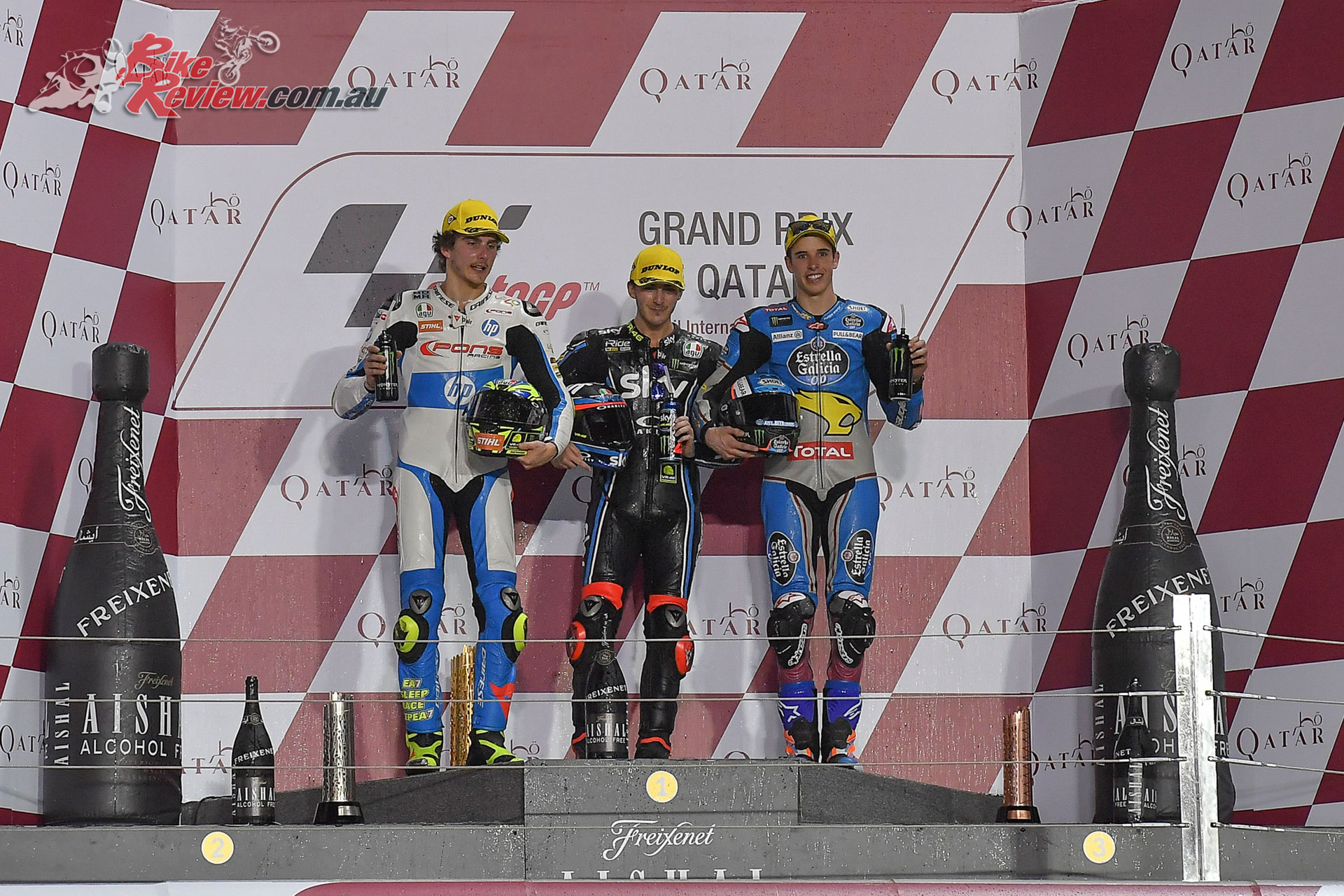 Getting a strong start off the line as the lights went out, Bagnaia took the lead into the first corner as pole position man Marquez had a slight moment with Miguel Oliveira (Red Bull KTM Ajo) in the run up to the opening corner. But it was the Italians making a break in the opening lap, with Bagnaia and Baldassarri leading the way ahead of Marquez, who quickly recovered from the wobble.

It looked like Bagnaia would be able to escape but the two bikes behind then began to close – before Marquez fell into problems as he was close to overtaking the Pons HP40 bike for second, running off track through turn one as his rear brake disc glowed red hot under the night sky. Although then out of the fight for the win, the 2014 lightweight class Champion held onto the final podium spot, holding off Mattia Pasini (Italtrans Racing Team), who took fourth.

The duel for the win began to really light up on the final laps, and the last lap set up a classic showdown. Baldassarri made his move into the penultimate corner and briefly took the lead, but Bagnaia stole it straight back – and was able to hold his advantage on the long run to the line.

Next up was best rookie Joan Mir (EG 0,0 Marc VDS), who took eleventh for a solid debut as he comes back from an injury late in preseason.

Now the paddock moves west to the Americas, with Argentina first on the agenda.

Jorge Martin (Del Conca Gresini Moto3) waited a while to take his maiden win in the final race of 2017, but the Spaniard made it two in a row as he held off compatriot and expected title challenger Aron Canet (Estrella Galicia 0,0) in a tense desert duel to take the first win of the year. Behind the lead duo who escaped in the lead, Lorenzo Dalla Porta (Leopard Racing) took his first ever podium as he beat off a group battling for the rostrum.

Although Niccolo Antonelli (SIC58 Squadra Corse) started from pole position for the fifth time of his career and took the holeshot, it was Martin who got an early lead – pulling a gap of over half a second in the opening four laps. He wasn’t to be left alone for long, however, as the duo of Canet and Italian Enea Bastianini (Leopard Racing) soon caught the Spanish rider at the front.

But the three-way battle for the victory soon became a duel as Bastianini witnessed opening round heartbreak; crashing out of second position on the sixth lap and leaving Martin and Canet at the head of the field.

Martin seemed to take control of the race and secure the lead for the majority of the 18 laps, but Canet certainly hadn’t given up as he stayed on his tail until the closing laps. Coming down to the wire, Martin led over the line for the penultimate lap and began to open up a slight gap over his fellow Honda rider through the first sector. Ultimately Martin held his advantage, sealing the victory by just 0.023 ahead of Canet to take the first honours of 2018 after a drag to the line.

Third position and the final spot on the podium was a sensational battle, as five riders became nine and they began the battle under the sunny skies of Qatar in a bid to take the final trophy, swapping paint on each lap. Dalla Porta, Antonelli, Gabriel Rodrigo (RBA BOE Skull Rider), Fabio di Giannantonio (Del Conca Gresini Moto3), Kaito Toba (Honda Team Asia), Ayumu Sasaki (Petronas Sprinta Racing), John Mcphee (CIP – Green Power) and Marco Bezzecchi (PruestlGP) were locked in the fight, but McPhee fell victim to some late bad luck as he crashed out on the final lap.

As the group thundered towards the line, Dalla Porta took it by thousandths – with pole man Antonelli in fourth, ahead of Argentinean Rodrigo in fifth. And it was a stunning display from Di Giannantonio as he pushed though from 16th position on the grid to take a top six finish.

Next stop Termas de Rio Honda, with the Argentina GP on the horizon.