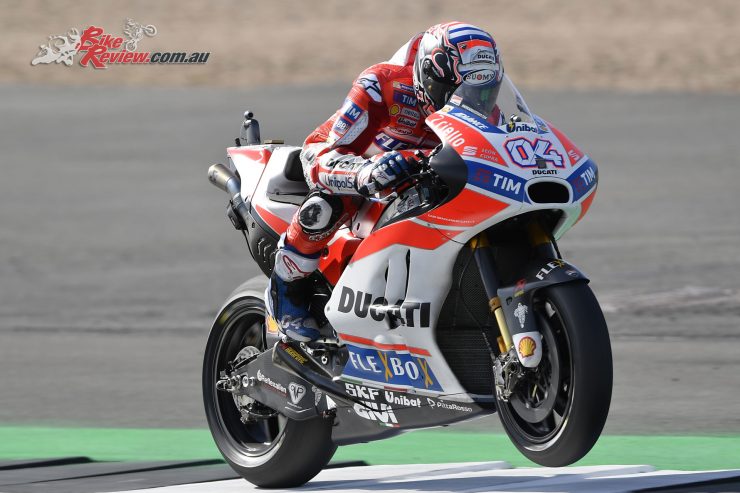 Andrea Dovizioso (Ducati Team) became the first man to win four races this season at the British GP, as the Championship challenger put on a tactical masterclass once again. 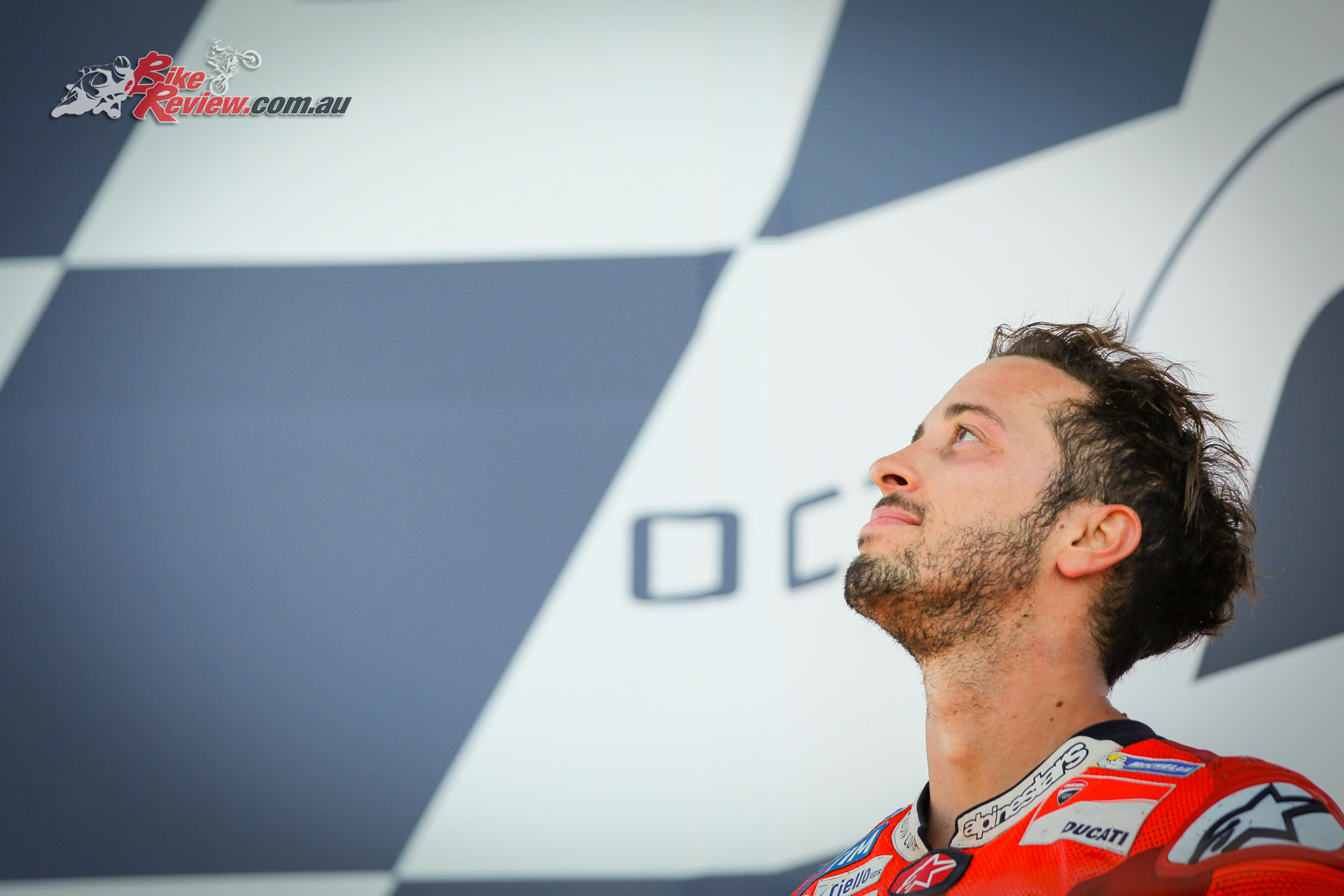 It was Rossi who bolted off the line; the nine-time World Champion getting a lightning start from the middle of the front row and disappearing into the distance in the initial stages.

Behind the ‘Doctor’, Marquez led a close five rider train with Cal Crutchlow (LCR Honda), Viñales, Jorge Lorenzo (Ducati Team) and Dovizioso on the chase. Marquez suffered a huge moment early on, but the rider from Cervera remained in charge of the chasing pack. 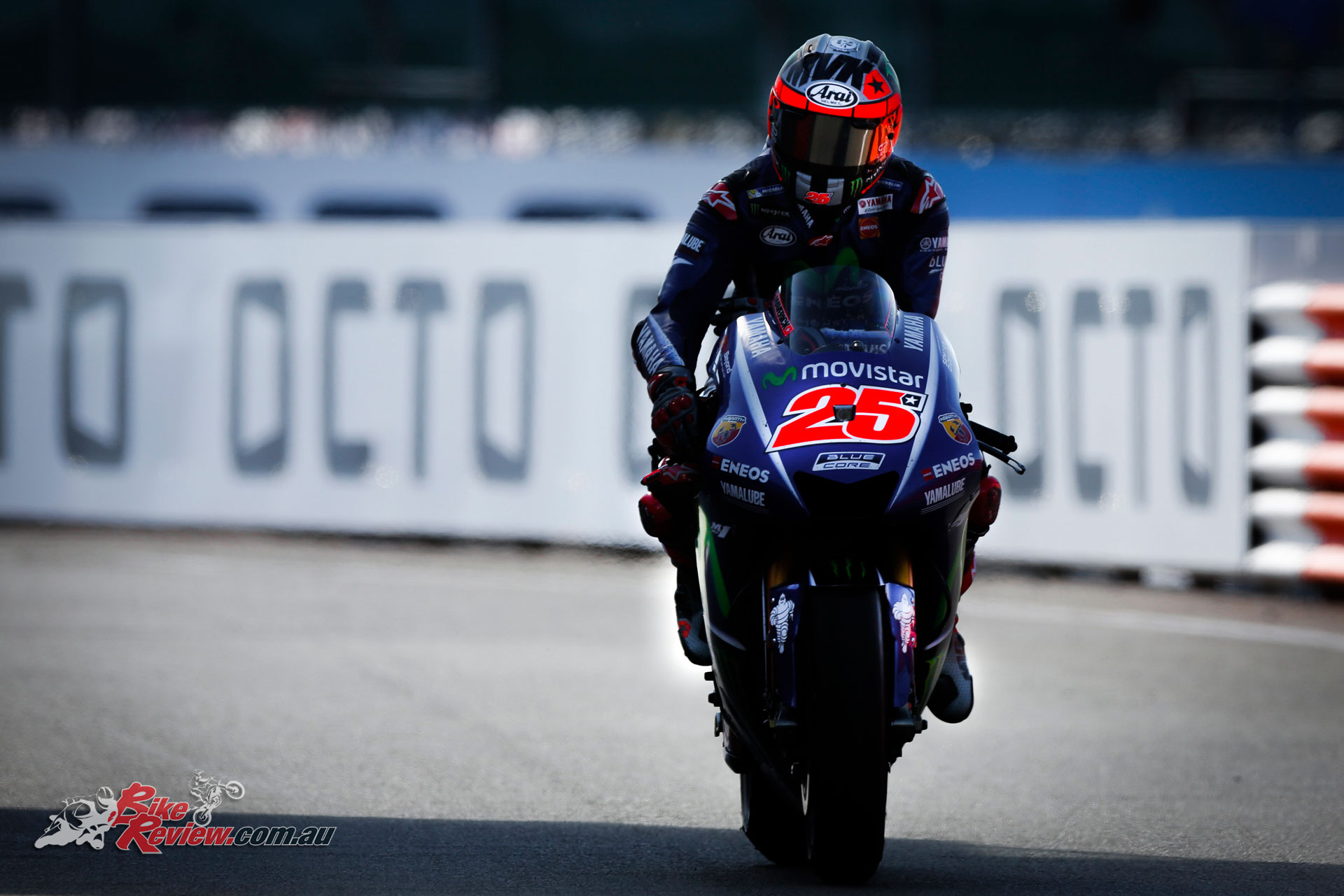 Soon, the Dovizioso struck against Lorenzo and the group began to pull away from the ‘Spartan’, just as Rossi pulled away on his own at the front. The game of high-octane chess continued with the four in line and staying within touching distance of Rossi, until a sudden puff of smoke gave the Championship a serious shake up and Marquez was out of it. 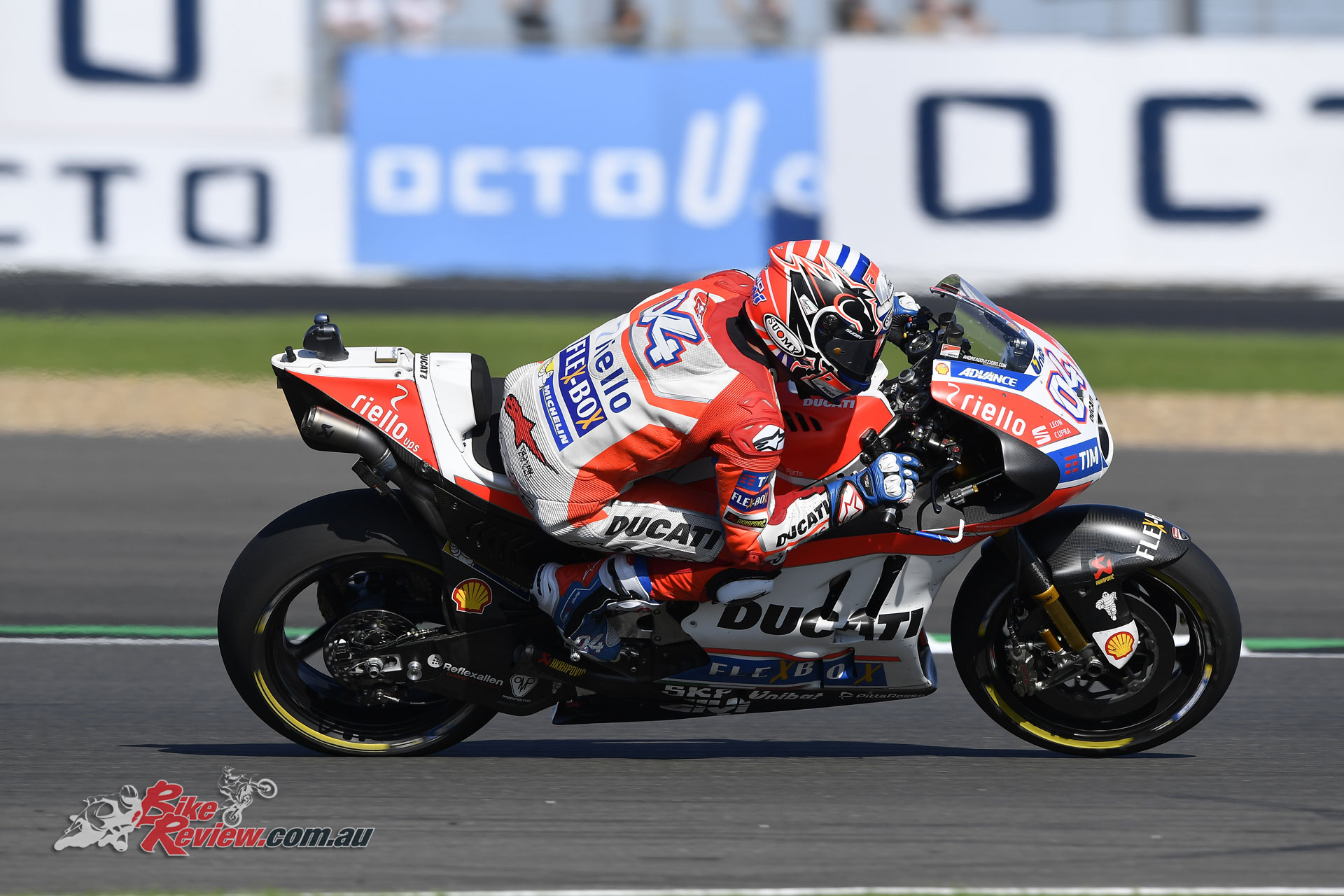 That left four, with Rossi then reeled in and everything looking like it would go down to the wire. And that it did, with Dovizioso able to pounce with three to go and get past his compatriot, swiftly followed by Viñales. The ‘Doctor’ tried to fight back but found the duo able to just stay clear – and the final lap was approaching.

With the concertina effect seeing the Ducati able to pull a gap and then the Yamaha able to close, it was incredibly tight as the two headed around the final 5.9km lap of Silverstone. 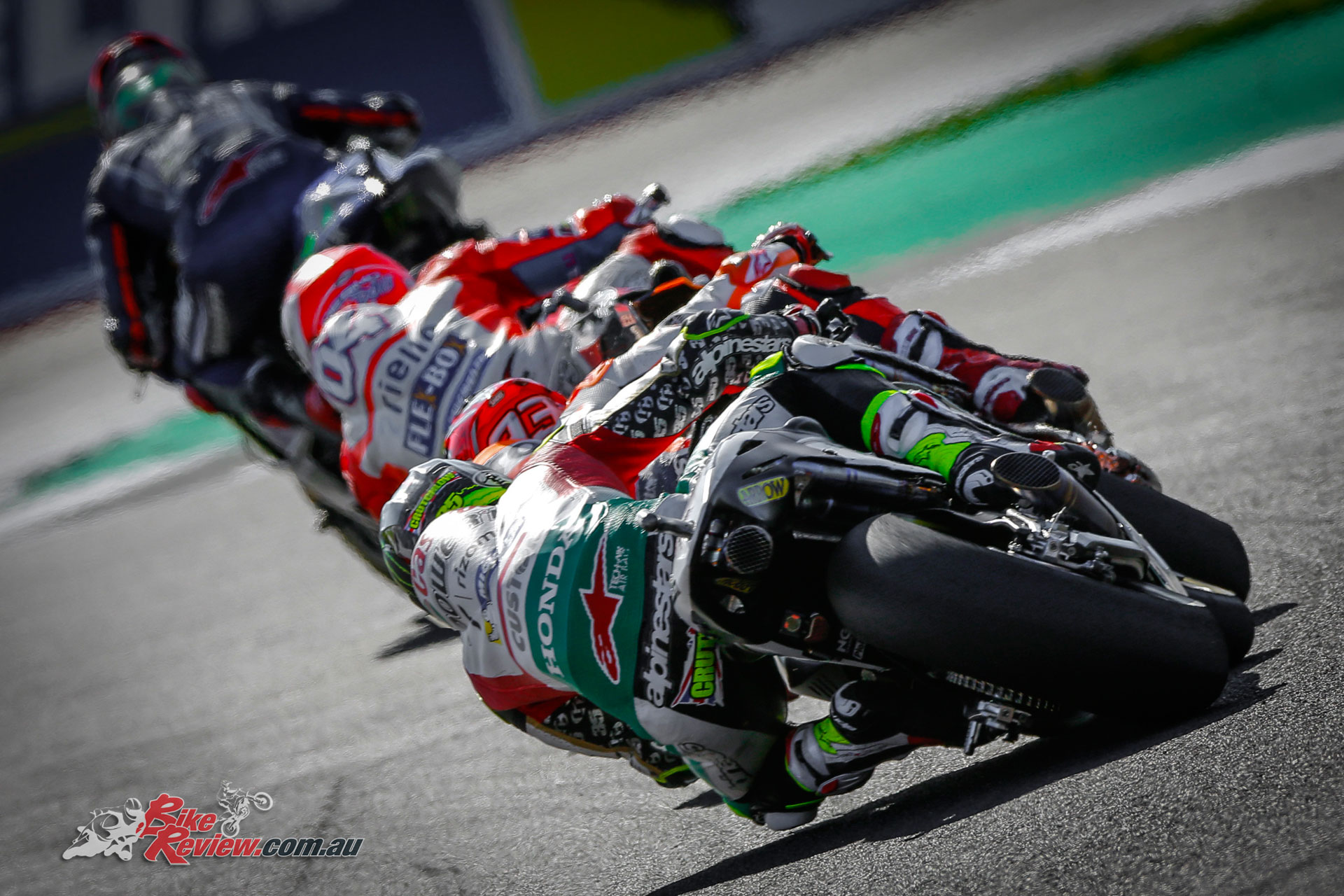 Having played his hand to perfection, Dovizioso was able to keep the advantage to the line – taking his fourth win of the year. Viñales took second, with Rossi completing the podium. Crutchlow, not quite able to get close enough to make his move, took fourth. 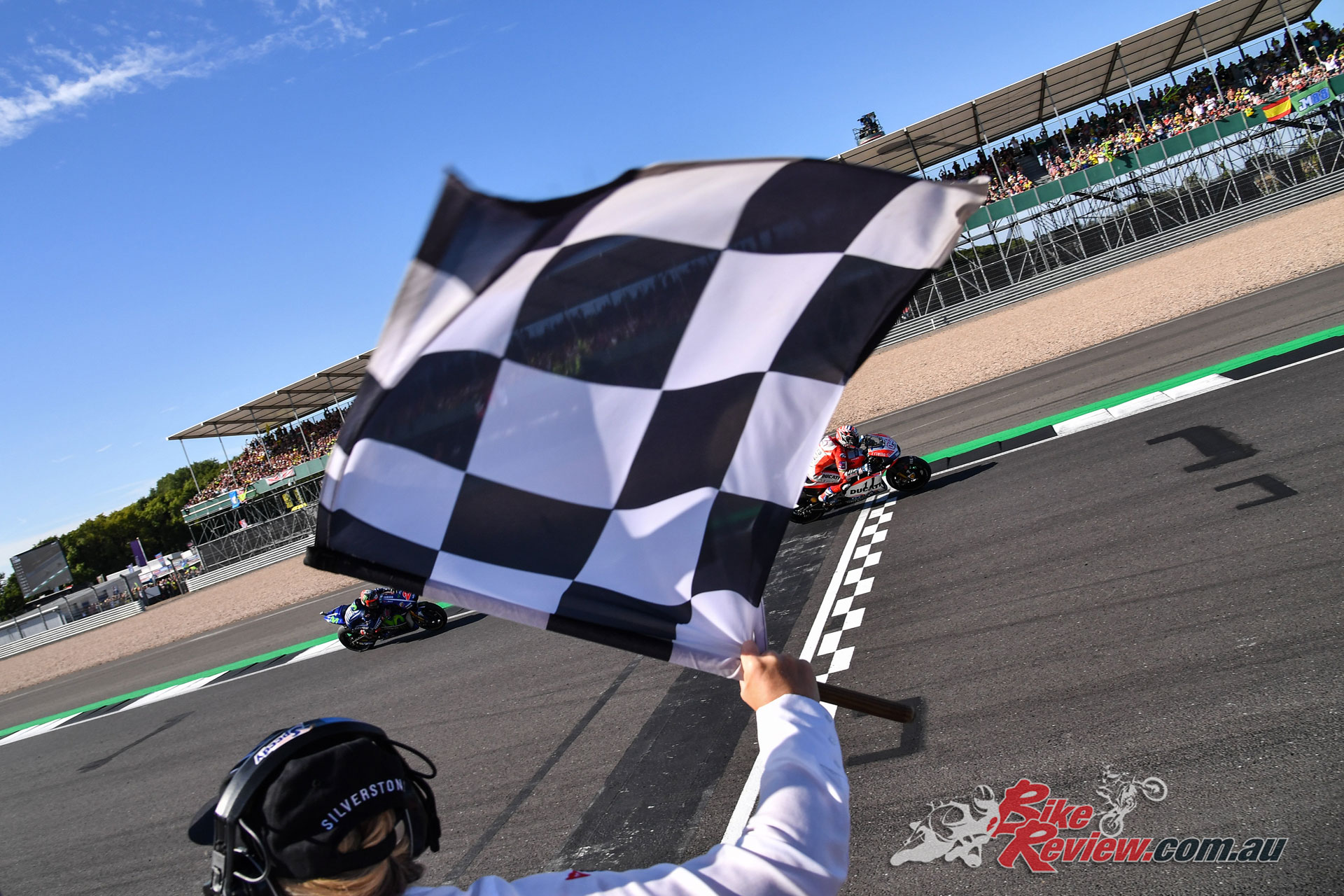 Lorenzo had a great race to cross the line in fifth – and only 3.5 seconds off the race winning time of his teammate. The ‘Spartan’ overcame Johann Zarco (Monster Yamaha Tech 3) in the latter stages to pull a sizeable gap on the Frenchman over the line as he continues to move forward. Zarco took P6, comfortably ahead of a more difficult day at the office for Dani Pedrosa (Repsol Honda Team). 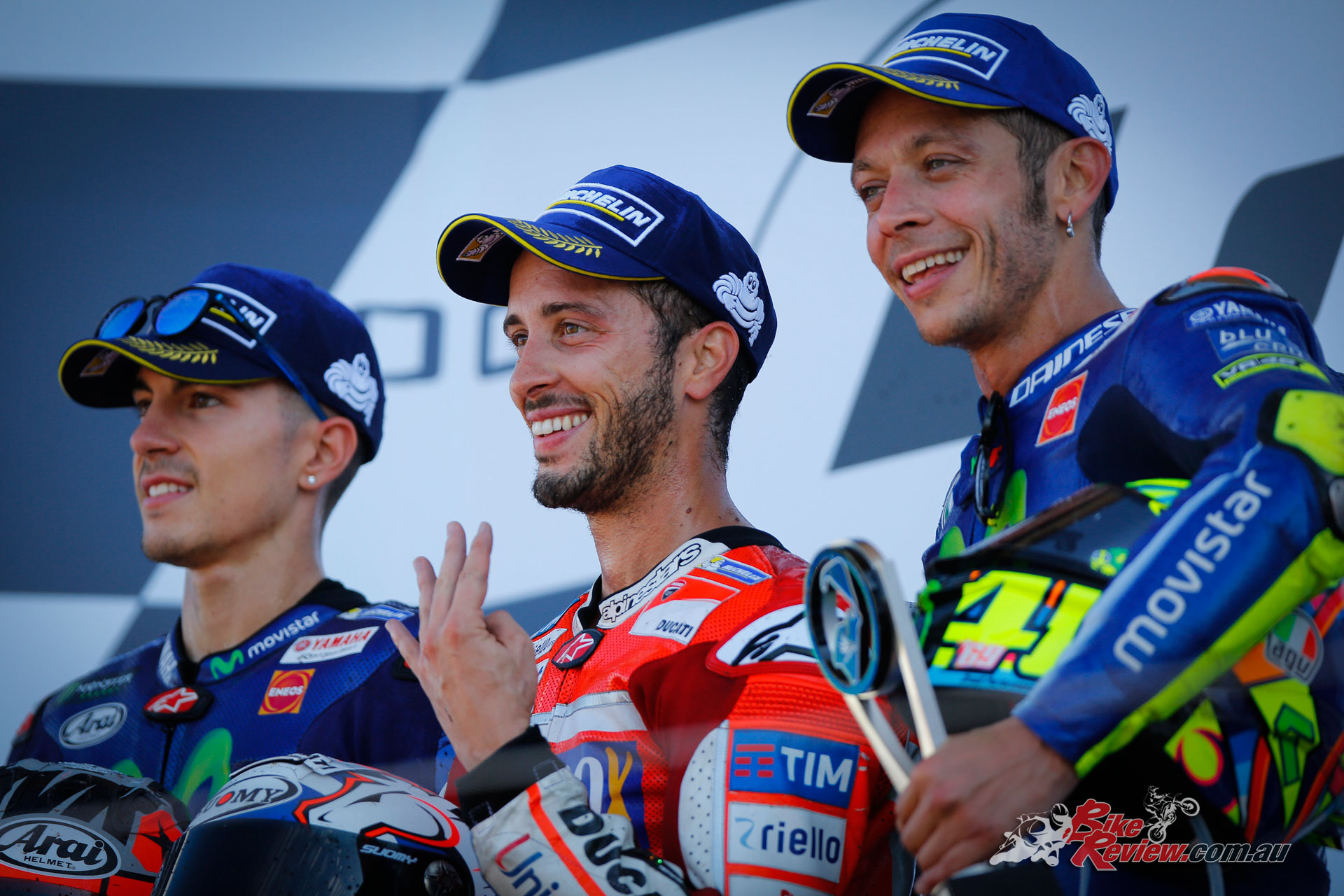 Takaaki Nakagami (Idemitsu Honda Team Asia) took his second ever Moto2 win in the British GP, making a good start from fourth on the grid to chase down Championship leader Franco Morbidelli (EG 0,0 Marc VDS) and take over at the front. Mattia Pasini (Italtrans Racing Team) was also able to charge past his compatriot to take second, with Morbidelli completing the podium in third. 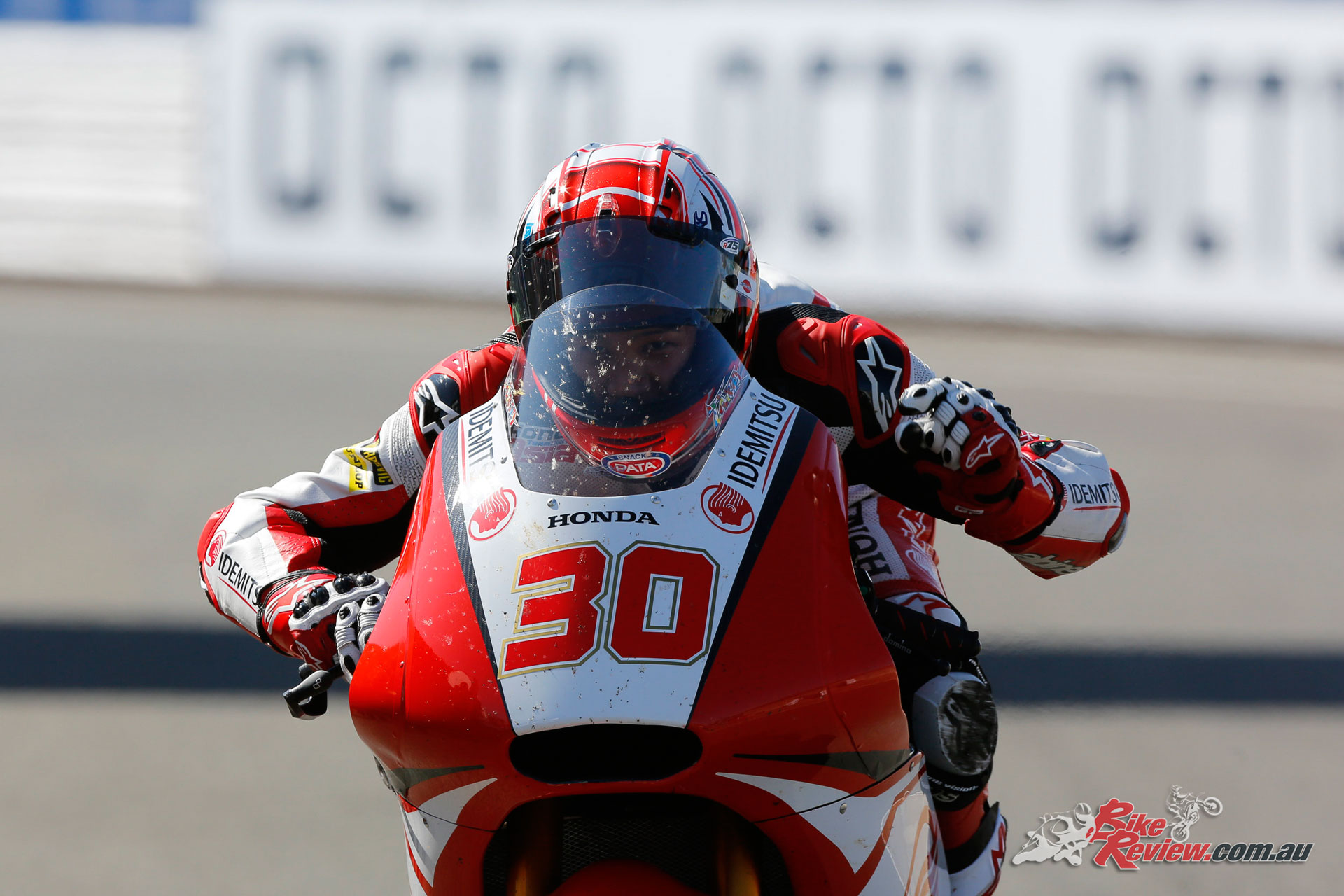 Of the front row it was P2 starter Alex Marquez (EG 0,0 Marc VDS) who bolted off the line, with the rider from Cervera a margin ahead by the end of Lap 1 – and polesitter Pasini dropping back into the clutches of Nakagami. And Morbidelli, soon on the rear wheel of the Japanese rider, was in P2 by the end of the first lap – soon starting to reel his teammate in.

After steadily catching Marquez, the Championship leader pounced and the two EG 0,0 Marc VDS bikes were locked together at the front. Marquez then hit back, before suddenly sliding out at Turn 14 in a dramatic twist to the race. That left Morbidelli in some free air, but not for long – with Nakagami quick to catch and pass the Italian.

After hitting the front, the Japanese rider was uncatchable, initially disappearing into the distance – but the story had another chapter as Pasini went on a late charge, closing up but not able to quite get close enough. Over the line, Nakagami was seven tenths clear to take his second Moto2 win and celebrate his recently-announced move to the premier class in style, with Pasini taking another podium as his run of good form in 2017 continues. Morbidelli completed the podium, and gained another small margin in his Championship lead.

Tom Lüthi (CarXpert Interwetten) – another recently-announced addition to the MotoGP™ grid – took fourth and made a considerable move up from his P9 on the grid, and crucially crossed the line only one place behind key title rival Morbidelli. Top rookie Francesco Bagnaia (Sky Racing Team VR46) completed the top five and was another to gain big after a more difficult Saturday, ahead of compatriot Simone Corsi (Speed Up Racing) in sixth.

Stefano Manzi (Sky Racing Team VR46) had an incredible race for his best result yet in the intermediate class, taking seventh and once again showing serious pace at Silverstone to follow on from his performance in Moto3 at the venue last year. He beat Miguel Oliveira (Red Bull KTM Ajo) over the line by only 0.061, with second Red Bull KTM rider Brad Binder another few tenths back to take another rookie top ten in P9. Dominique Aegerter (Kiefer Racing) completed the top ten as fastest Suter, after also going quickest in FP1 in a solid weekend. 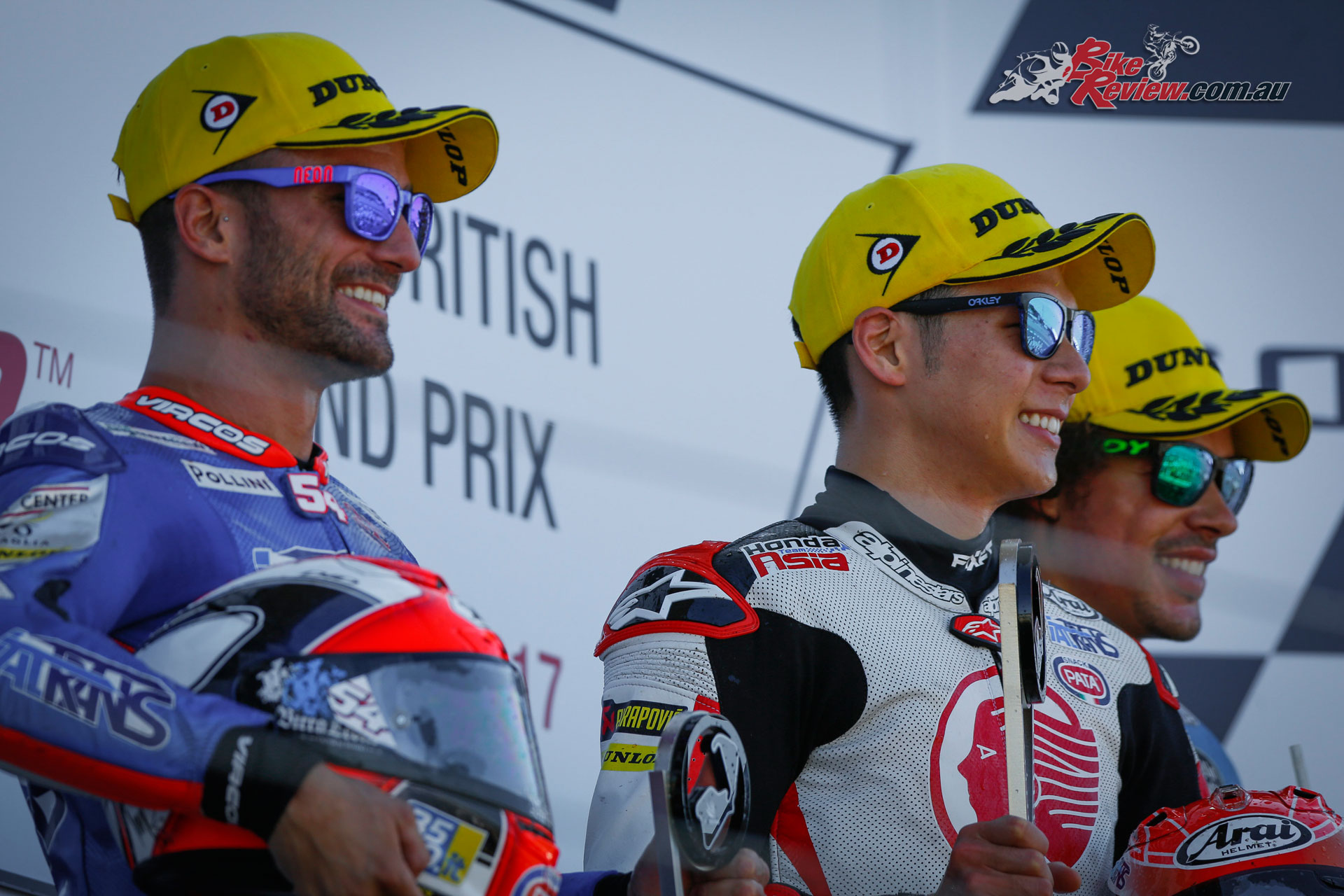 Next up is Misano – home turf for Morbidelli and with the gap giving him a little breathing space. But not much, with the Czech GP already having shown how quickly the tide can turn and 29 points separating the two leaders of the Moto2 pack.

Aron Canet (Estrella Galicia 0,0) came out on top in a clash of the Moto3 titans at Silverstone, with an incredible freight train of frontrunners throughout the race – covering almost the entire field – and the race then Red Flagged on the last lap following an incident on track. 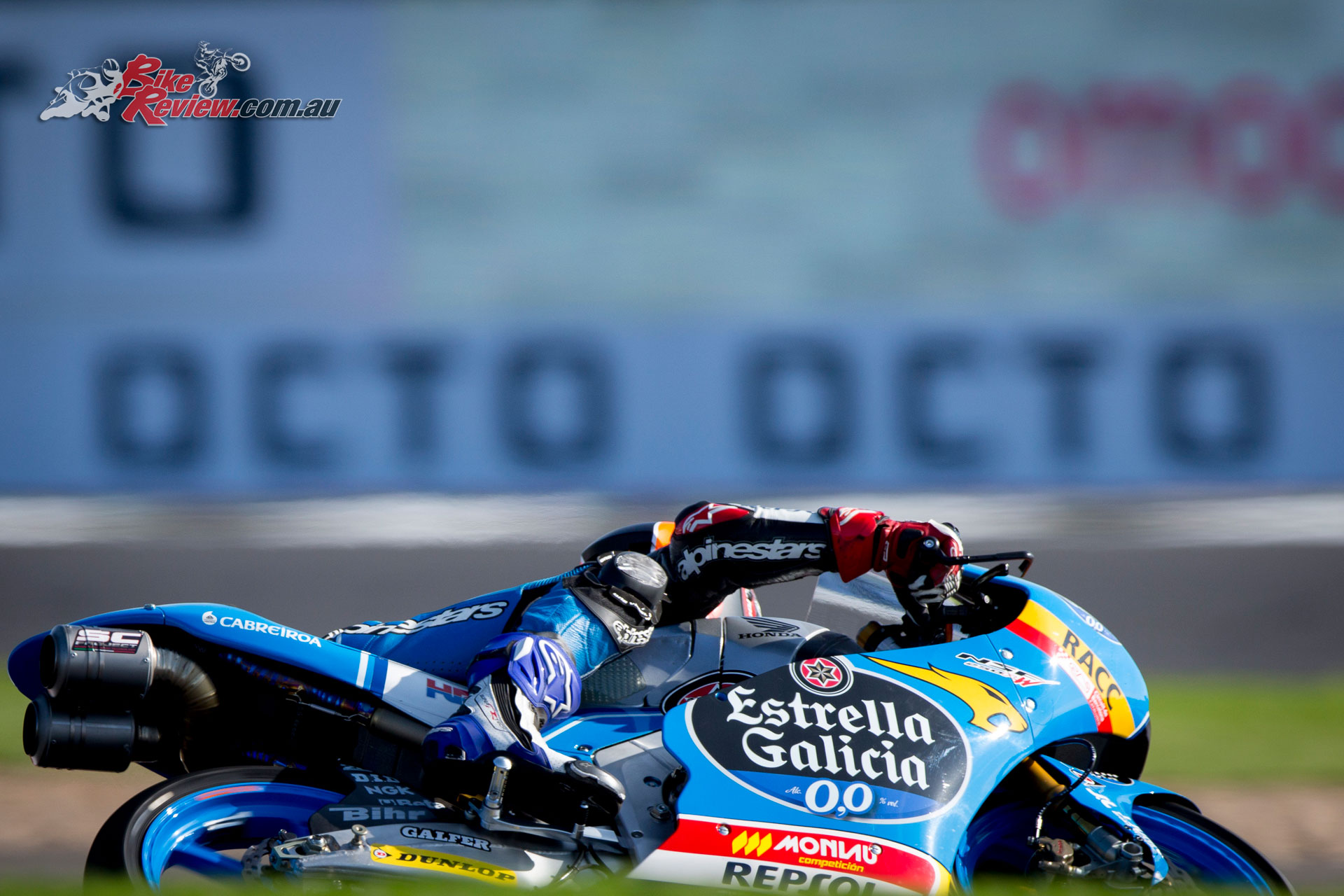 Canet’s teammate Enea Bastianini took second and returned to the podium for the first time this season, ahead of another impressive podium finish for Jorge Martin (Del Conca Gresini Moto3).

The rider taken to the Medical Center following the Red Flag incident was Juanfran Guevara (RBA BOE Racing Team), with the team confirming thereafter that he escaped injury.

Polesitter Romano Fenati (Marinelli Rivacold Snipers) got a good start and led the early stages, with the nature of the Silverstone circuit making sure no one could make a break for it – and almost the whole grid then locked in battle at the front. Switching and changing positions throughout, the lightweight runners redefined the possible in some corners – two or three abreast in a spectacular display of the best of Moto3.

As the last lap dawned, it was Canet across the line first – and that proved critical. An incident further back in the pack on that final lap brought out the Red Flag, meaning positions would ultimately be decided by where the pack crossed the line on Lap 16 of 17. That gave Canet the victory, Bastianini his first podium of the year, and was a cause of frustration for some as their tactics were cut short. 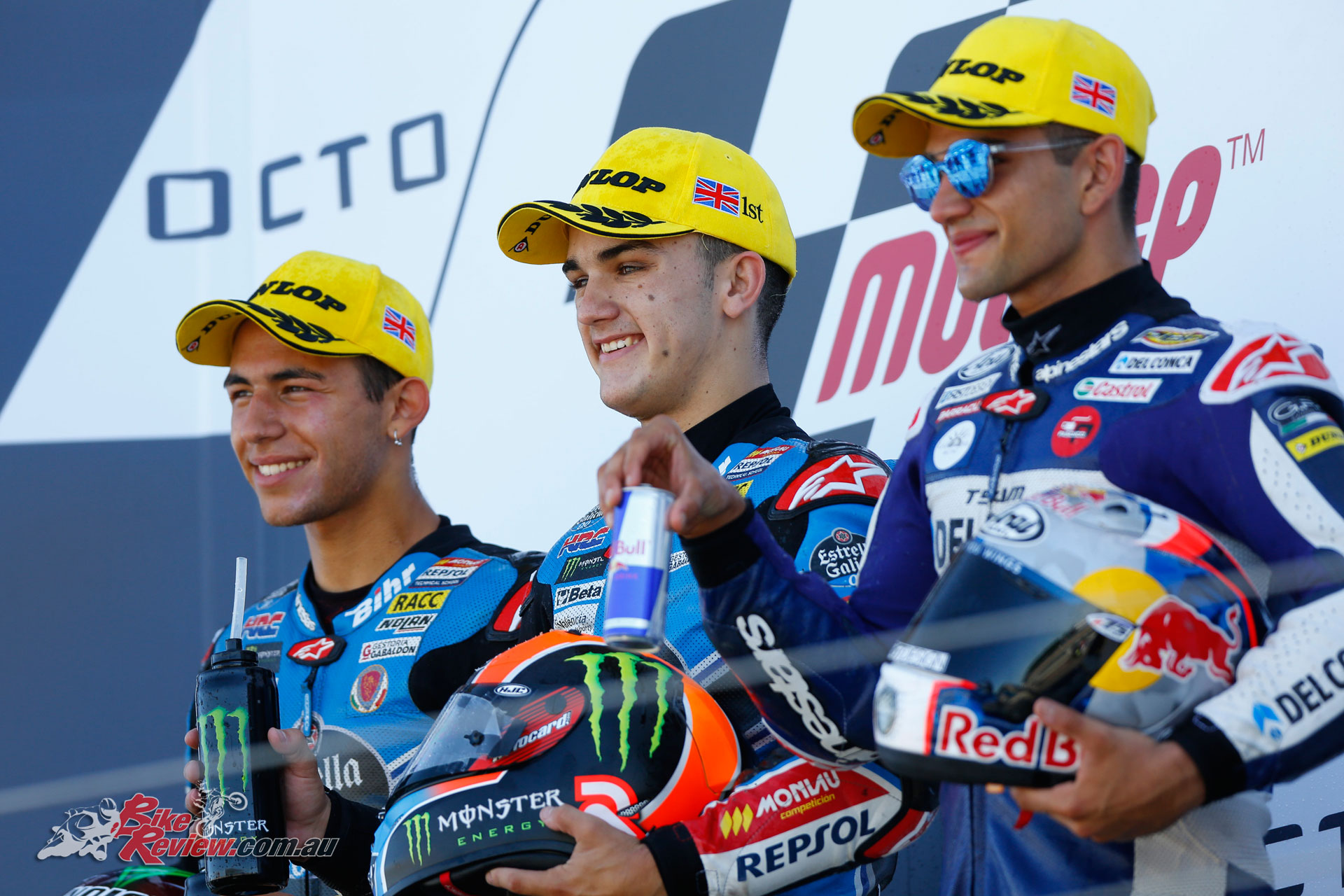 John McPhee (British Talent Team) had a more difficult end to the race in thirteenth after a second row start, losing the chance to slice through on the final lap, with the points scorers completed by rookies Nakarin Atiratphuvapat (Honda Team Asia) and Manuel Pagliani (CIP).