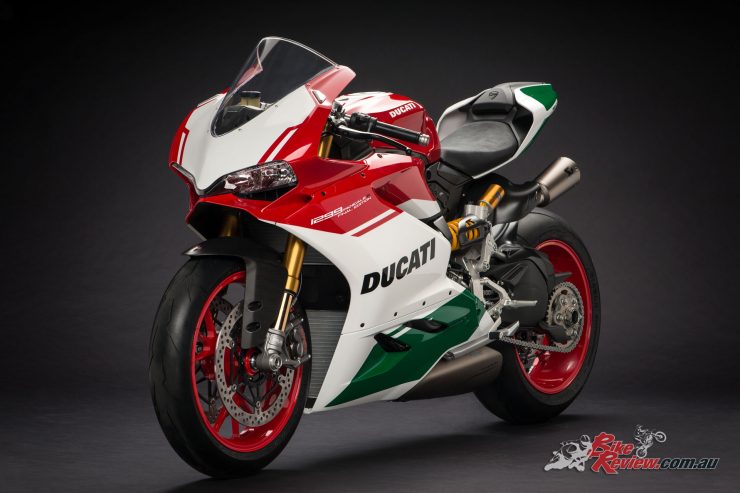 With the 1299 Panigale R Final Edition, Ducati pays tribute to the twin-cylinder engine that has made Superbike World Championship history.

From Marco Lucchinelli’s first victory on 3rd April 1988 with the 851 (in the first-ever world championship for modified production models) to the stunning 2017 wins by Chaz Davies and Marco Melandri on the Panigale R, the Bologna-built twin-cylinder has long been a winner in SBK. 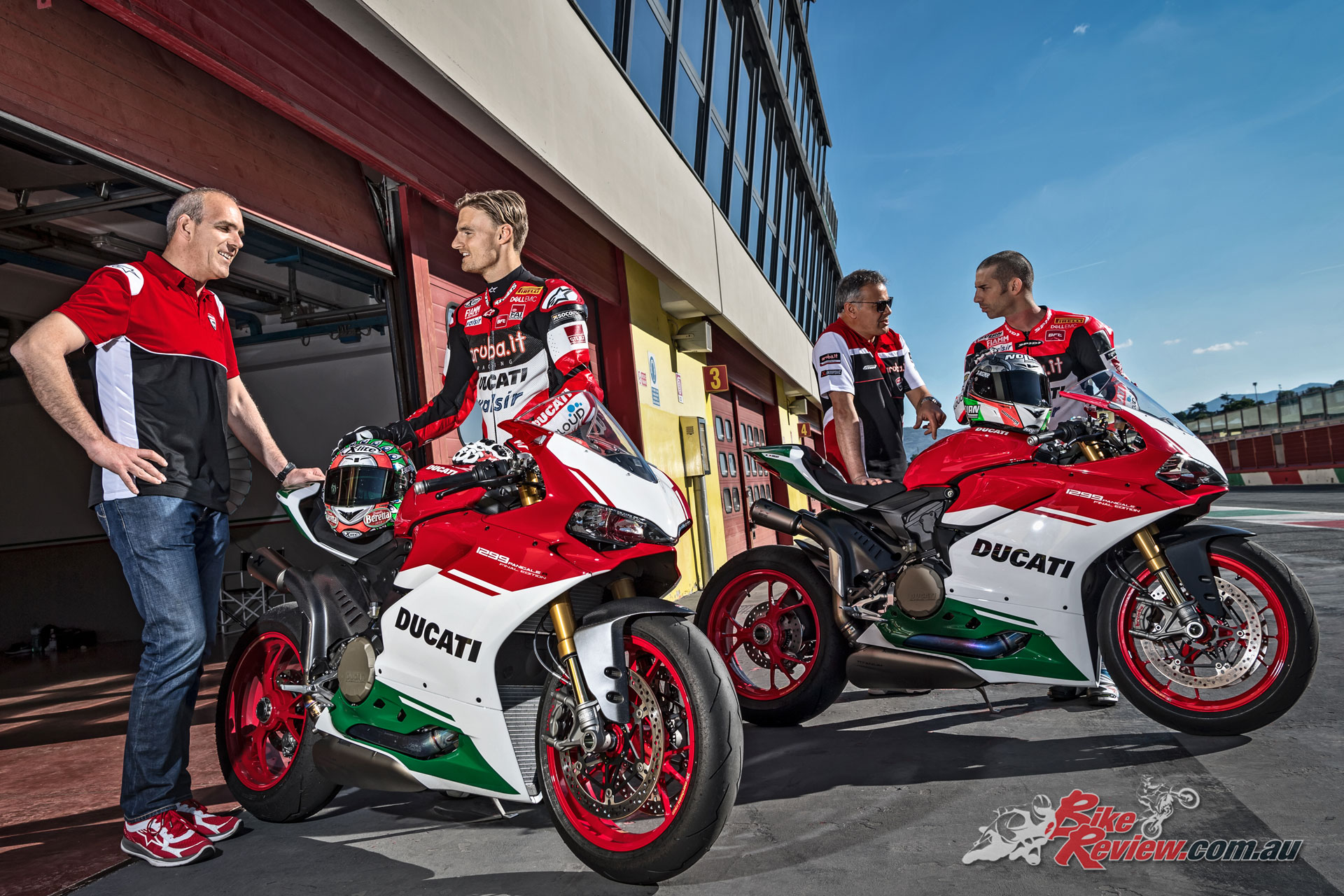 Desmoquattro, Testastretta, Superquadro: over three decades, the Ducati-designed twin-cylinder 4-valve engine with Desmodromic timing has gone from strength to strength, powering bikes that have made Supersport history. Motorcycles that have won no less than 330 World Superbike Championship races.

From the 851 to the Panigale R – and the 888, 916, 996, 998, 999, 1098, 1198 and 1199 in between them – the Bologna-built twin has always been as successful on the track as it has on the supersport market. Now, the 1299 Panigale R Final Edition pays homage to the great Ducati superbike tradition by combining best-ever twin-cylinder engine performance with a racing-derived chassis set-up. 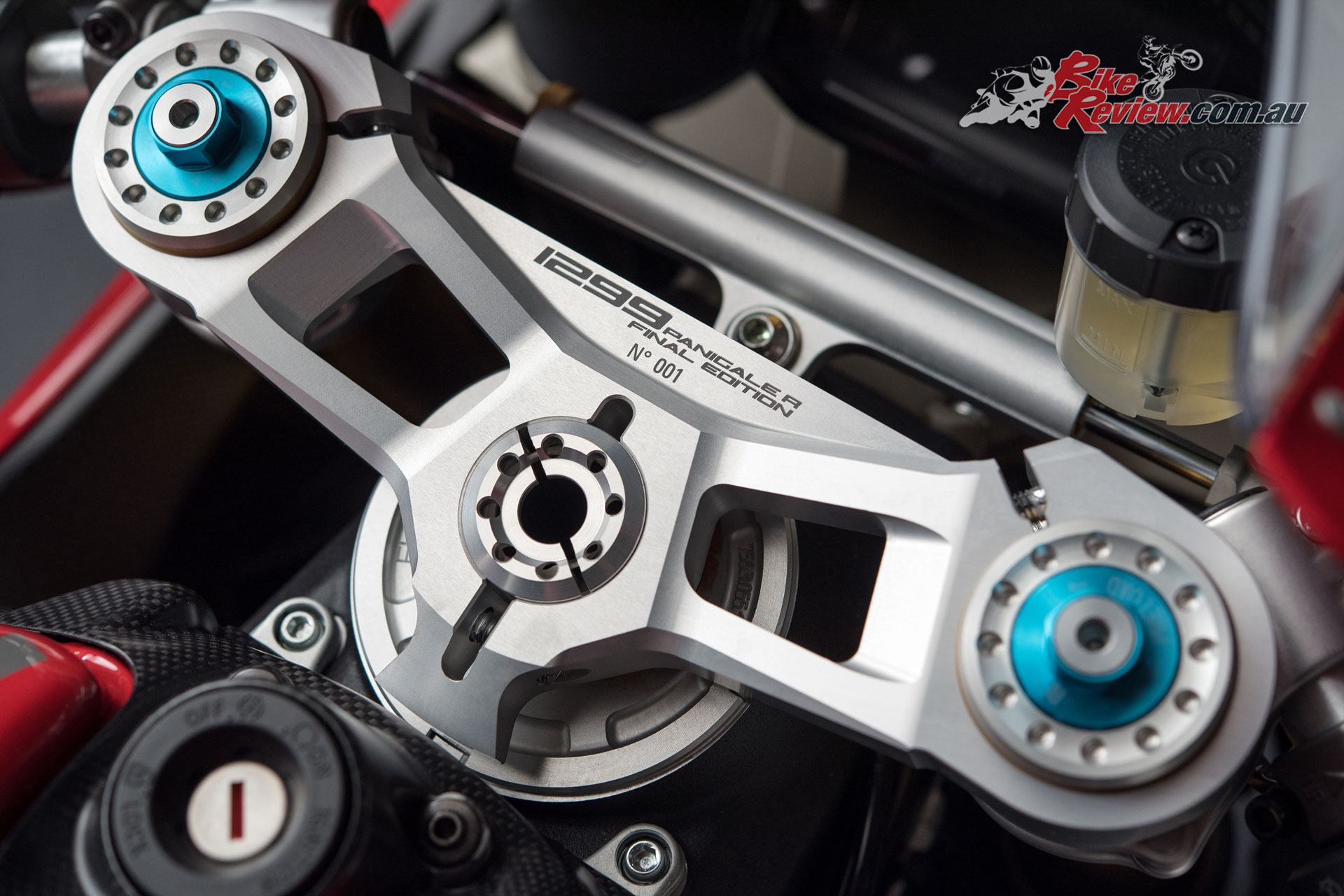 Available as a numbered (but not limited) series, the 1299 Panigale R Final Edition is a Euro 4 compliant road bike with a perfect mix of ultra-high engine performance and spot-on racing suspension.

As for electronics, the 1299 Panigale R Final Edition features the Bosch Inertial Measurement Unit (IMU) and ABS Cornering, Ducati Wheelie Control EVO (DWC EVO), Ducati Traction Control EVO (DTC EVO) and Engine Brake Control (EBC). All these systems are set according to the selected Riding Mode (Race, Sport and Wet) and can be personalised as desired. 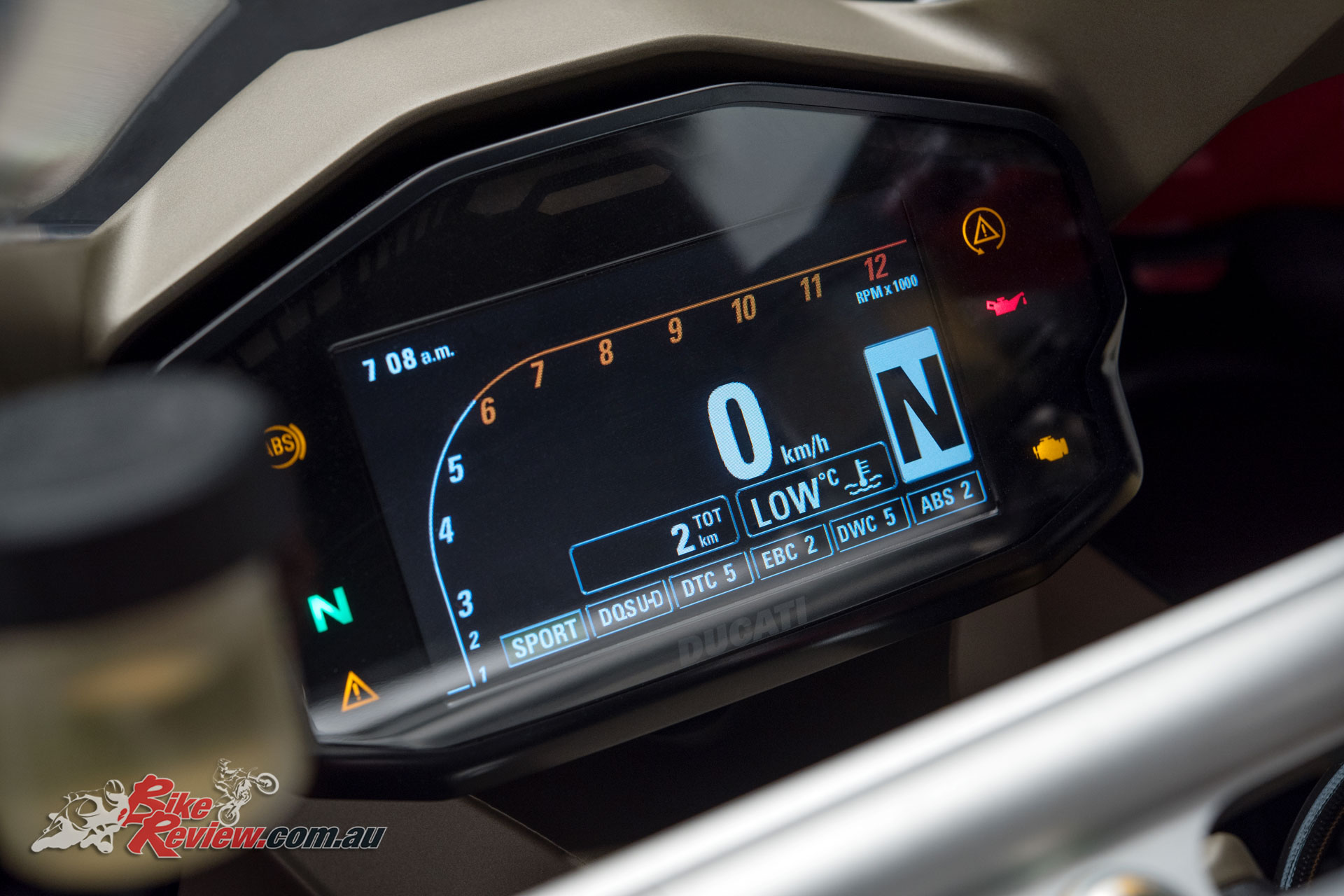 *The power/torque values indicated are measured using an engine dynamometer according to homologation regulation and they correspond to the homologated data, as quoted in the Bike Registration Document.

With 209 hp* at 11,000 rpm and 14.5 kgm* at 9,000 rpm, the 1299 Panigale R Final Edition is, together with the 1299 Superleggera, the most powerful Ducati twin ever. The Euro 4 compliant “Final Edition” Superquadro engine features a lightened crankshaft with a larger crank pin and tungsten balancing pads. Like the intake-exhaust valves, the con-rods are made of titanium. 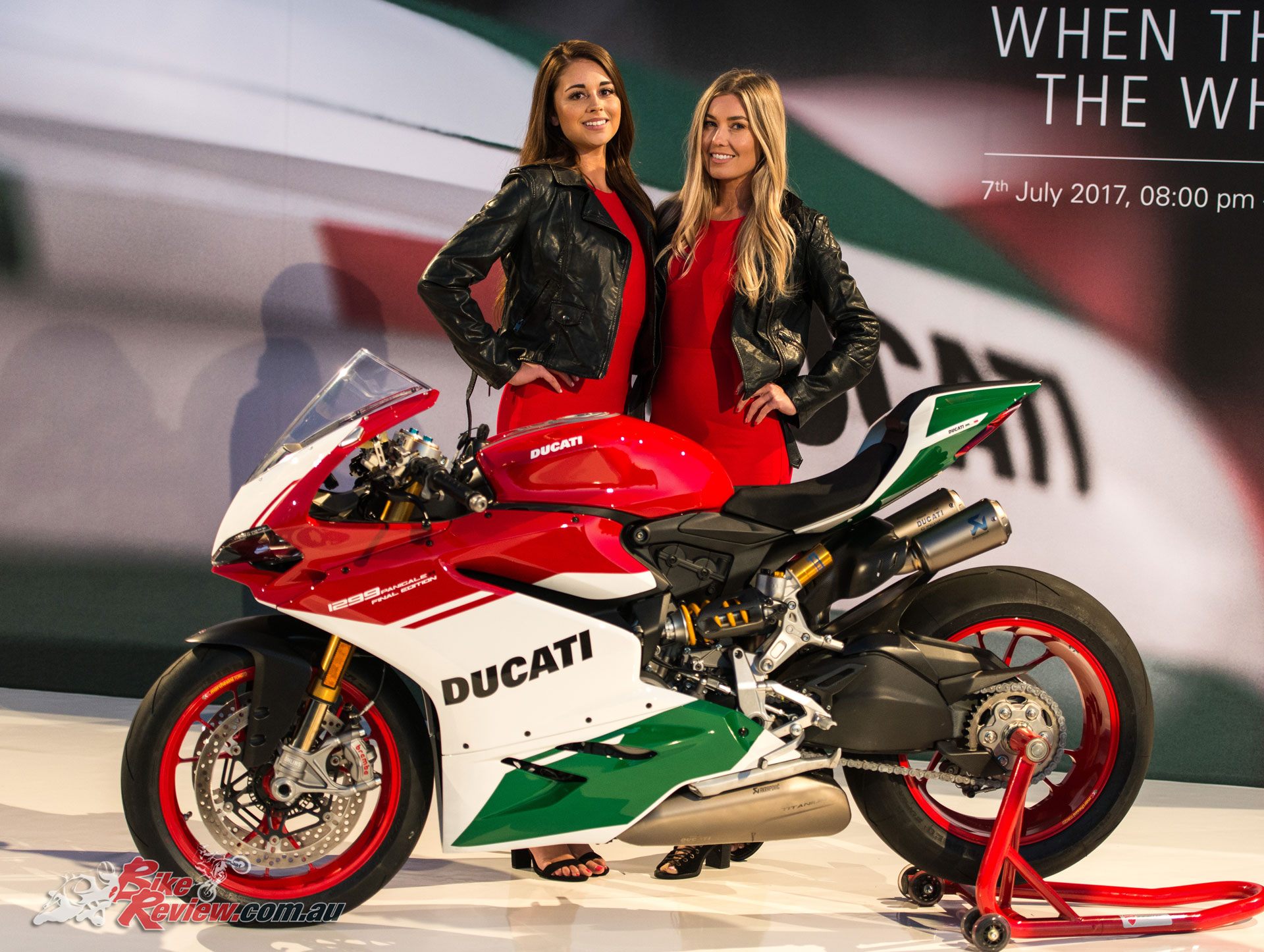 The two 116 mm diameter pistons, instead, as on Superbike engines, have just two segments and slide on steel cylinder liners.

The intake valves have a diameter of 48 mm as opposed to the 46.8 mm on the 1299 Panigale; exhaust valves have a diameter of 39.5 mm (against 38.2 mm on the 1299 Panigale). Intake and exhaust ducts have undergone development accordingly, improving fluid dynamics thanks also to new camshafts that offer both improved profiles and increased valve lift.

The 1299 Panigale R Final Edition features a clutch with new slipper and self-servo system, giving heightened ‘feel’ and ride stability thanks also to the use of a new forged aluminium clutch basket. 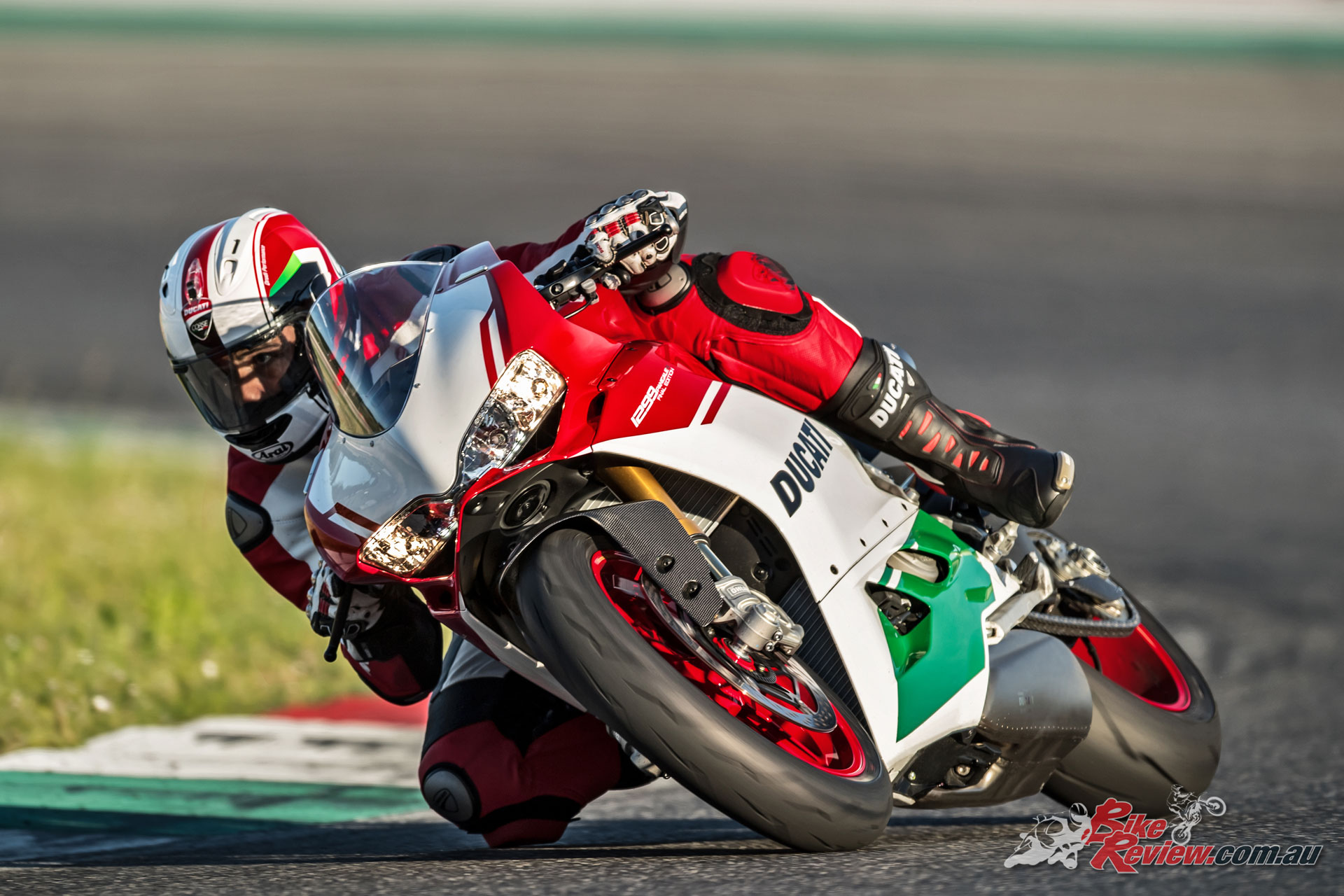 The air intake system uses a high-permeability filter while the throttle body features new aerodynamic throttle openings with a profile designed to improve airflow. Intake horn heights have, instead, been optimised for each cylinder head, unlike the 1299 Panigale which has horns of the same length.

Lastly, the 1299 Panigale R Final Edition has a complete all-titanium Akrapovič exhaust with a high dual silencer (Euro 4 compliant), just like the one on the official Panigale that competes in the World Superbike championship. 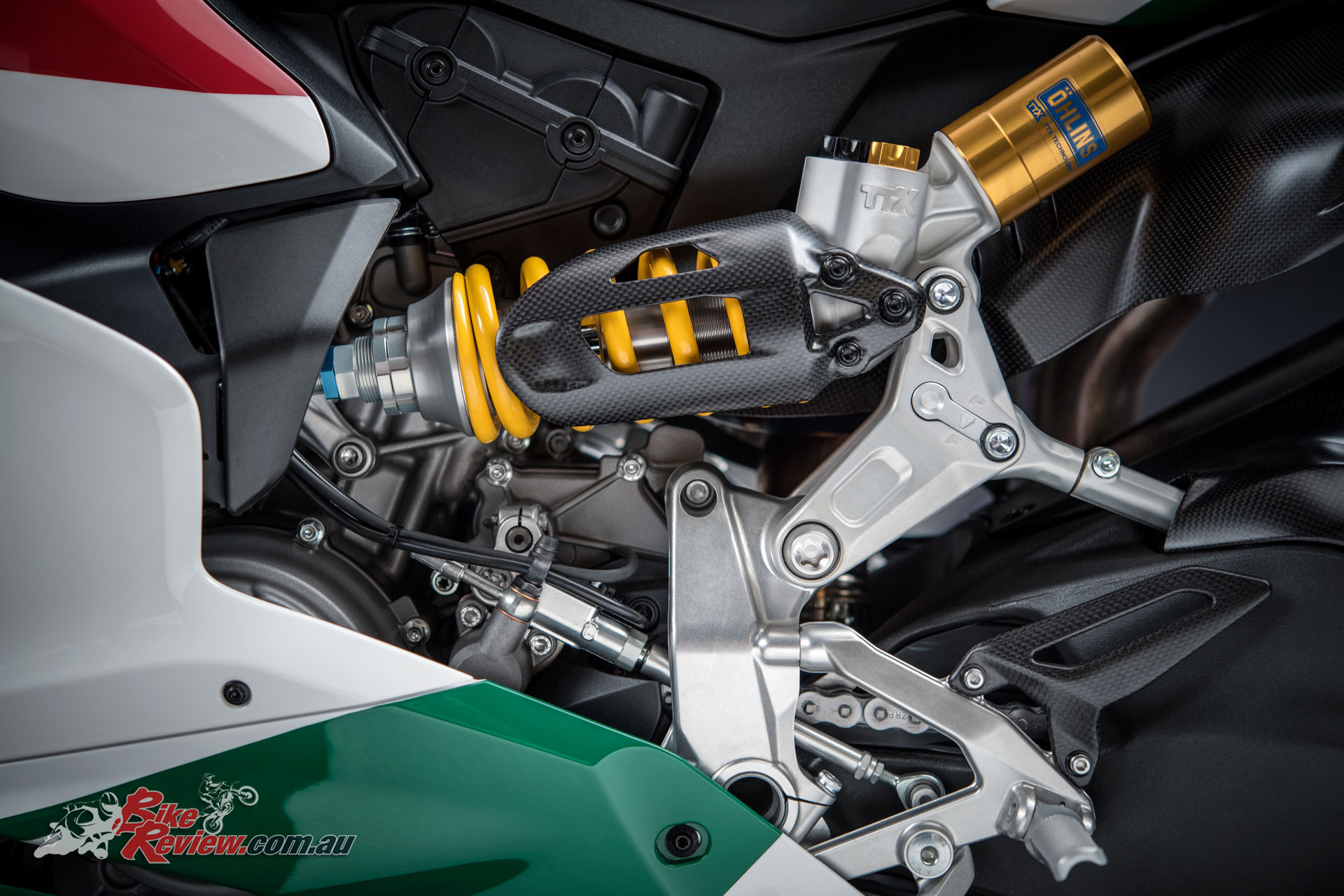 All these systems have several intervention levels, pre-selected according to the Riding Mode (Race, Sport and Wet) and which can be personalised as desired. Moreover, the 1299 Panigale R Final Edition features Ducati Data Analysis+ GPS (DDA+ GPS) and lets the rider record lean angles. 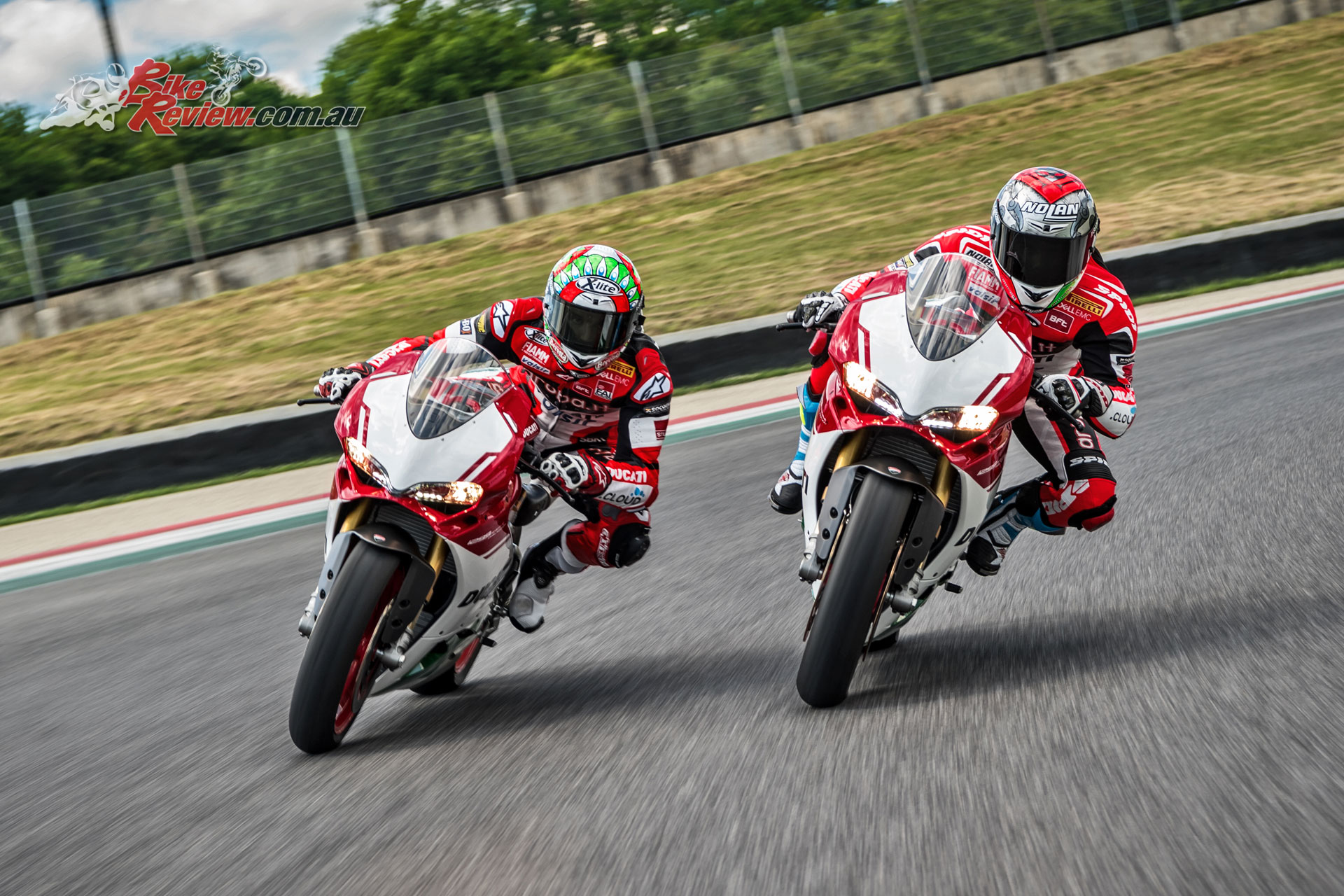 Completing the impressive array of electronic devices are the racing-derived handlebar switchgears that allow fast DTC, DWC or EBC adjustments during track riding.

The DTC EVO on the 1299 Panigale R Final Edition is based on an algorithm that ensures faster, more precise intervention. The DTC EVO interfaces with the Bosch Inertial Measurement Unit (IMU), constantly measuring the lean angle and using it to accurately calculate the degree of intervention needed to ensure suitable rear wheelspin (according to the DTC EVO level setting). 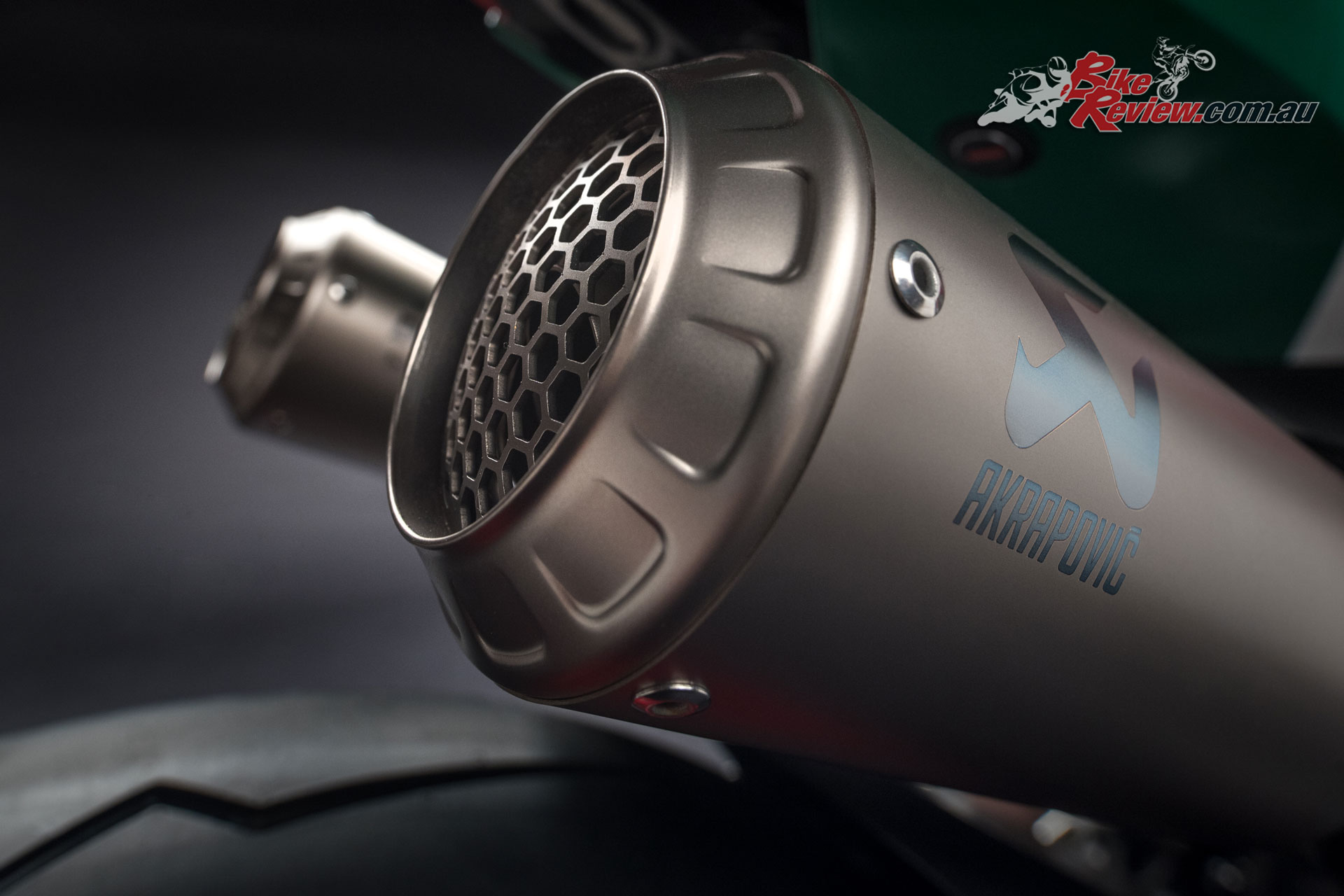 With simpler types of traction control, detection of rear wheelspin sees the system intervene to hold it in check. When optimal grip is re-established the system reduces intervention until spin reoccurs and the cycle repeats.

This produces a graph that shows intervention oscillating around a theoretical “ideal intervention line” that represents the traction limit. DTC EVO reduces the magnitude of those oscillations, making the system operate closer to the perfect intervention line. This is particularly advantageous in situations where grip changes, such as when the rear tyre becomes worn. 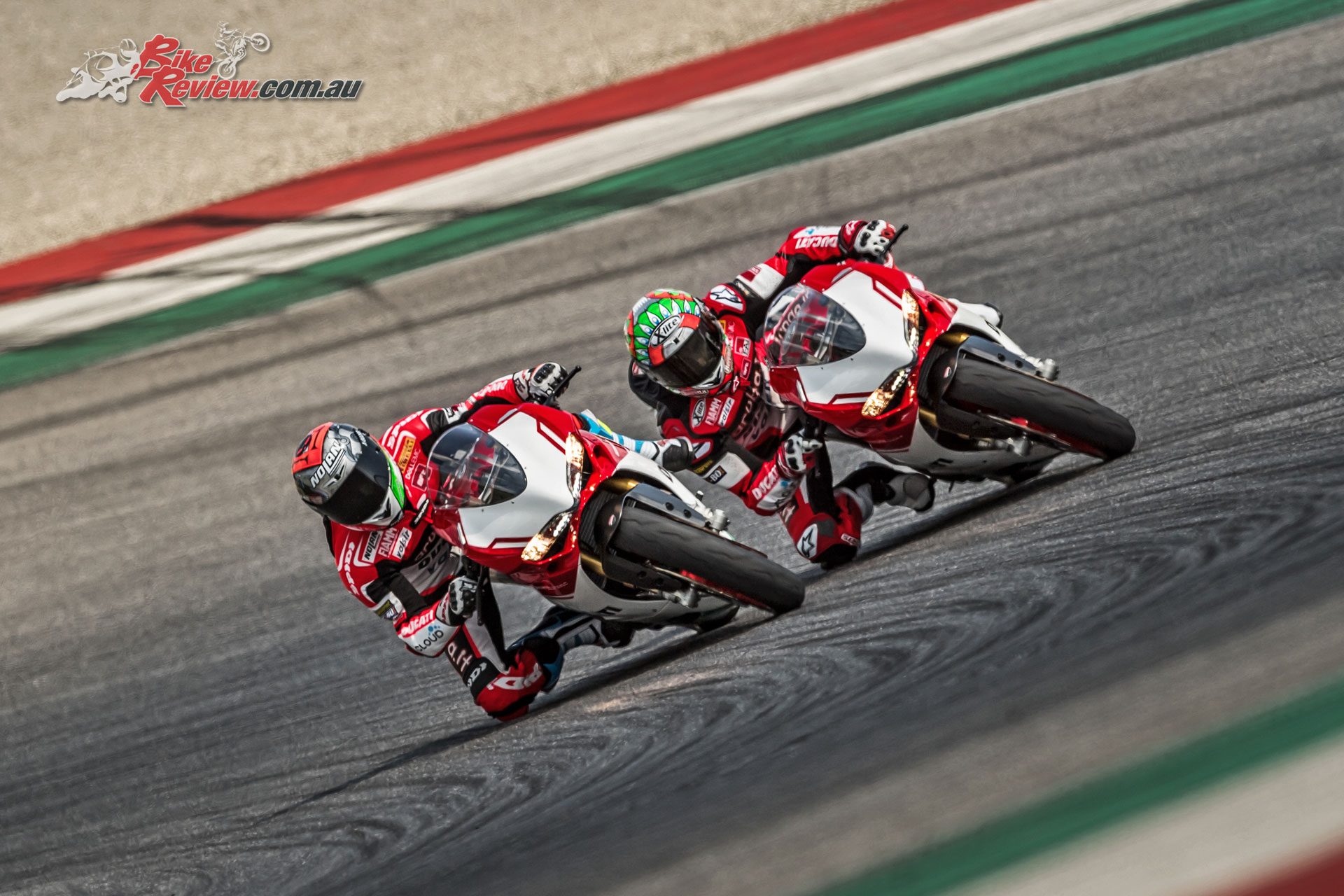 2017 Ducati 1299 Panigale R Final Edition, including all the latest electronics

In addition to this enhanced intervention precision, when set to ‘1’ or ‘2’ the DTC EVO adds a new function that allows the bike to be ridden at a level previously reserved for experts and pros. Now, when the bike is leaned over, the rider can use the throttle to request more wheelspin than would be given by the normal intervention level, allowing the bike to pivot around its front wheel and complete the taken cornering line. DTC EVO lets riders to do this while keeping safety parameters under control, effectively letting then ‘close’ the taken line with the rear wheel.

The 1299 Panigale R Final Edition also comes equipped with the latest version of Ducati Wheelie Control (DWC) EVO. This system has been overhauled in terms of both controller structure and algorithm, ensuring a more accurate response to the rider’s needs. With DWC EVO, wheelie detection is more accurate and the system intervenes to keep it in check more firmly and precisely than ever.
Engine Brake Control (EBC)

The EBC (Engine Brake Control) system was developed to help riders optimise vehicle stability under extreme turn-in conditions in MotoGP and Superbike championship races; it does so by balancing the forces applied to the rear tyre under severe engine-braking conditions. 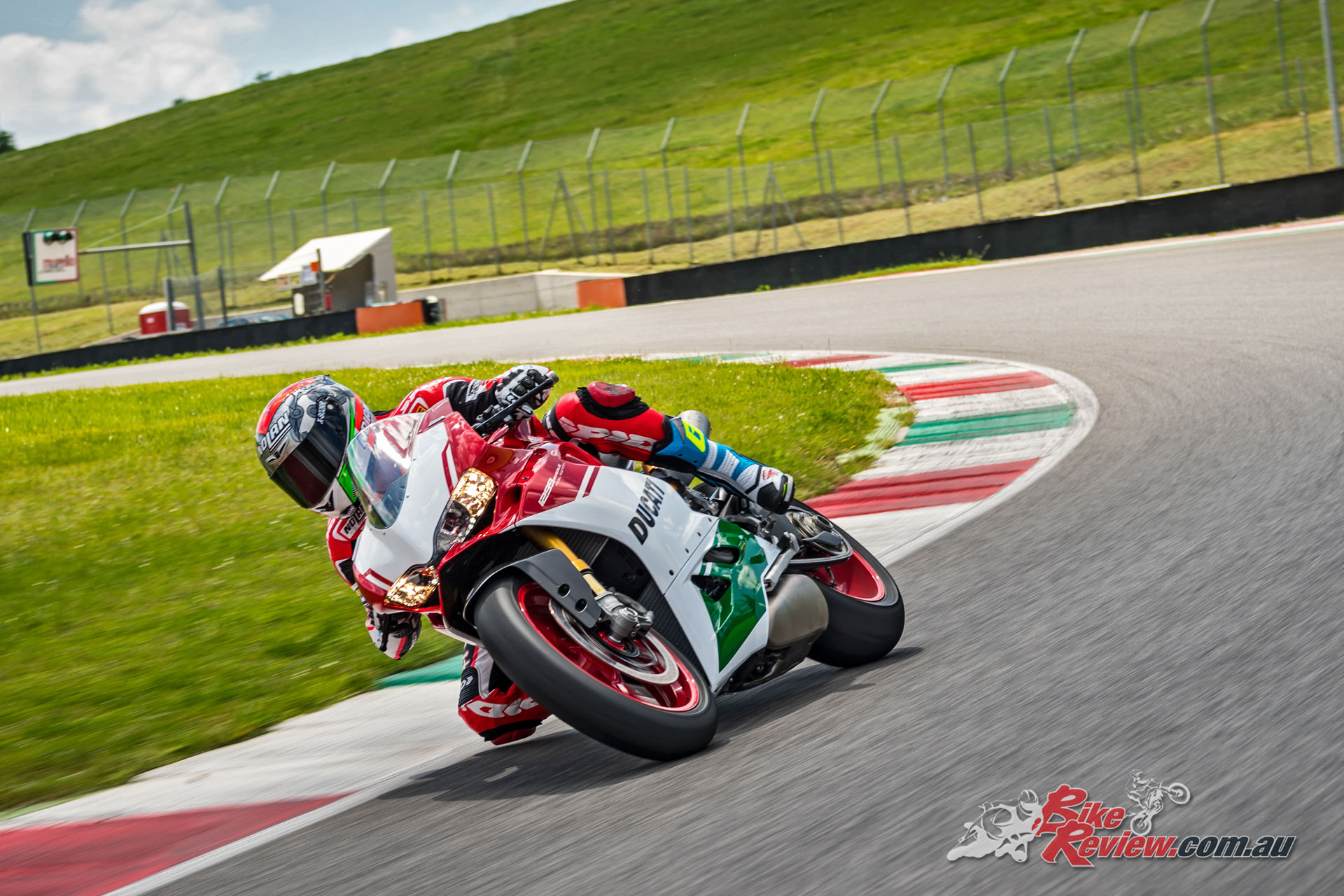 The EBC monitors the throttle position, selected gear and crankshaft deceleration rate under heavy braking and administers precise Ride-by-Wire throttle openings to balance the torque forces acting on the tyre. There are three EBC levels: set via the 1299 Panigale R Final Edition control panel, they are automatically integrated into the three Riding Modes to give riders even more efficient assistance.

In addition to minimising shift times, the DQS with up/down function allows clutchless down-changes, making hard braking more effective than ever. The system includes a two-way microswitch built into the shift lever linkage; when the gear shift is actuated, it sends a signal to the ECU. Thanks to full Ride-by-Wire control, the system works differently for up-changes and down-changes, integrating spark advance and injection adjustment during upshifts with an auto-blipper function during downshifts.

Extent and duration of system operation are designed to ensure seamless shifting even during extreme track riding; during downshifts the system works in concert with the slipper clutch and the EBC.
Monocoque technology 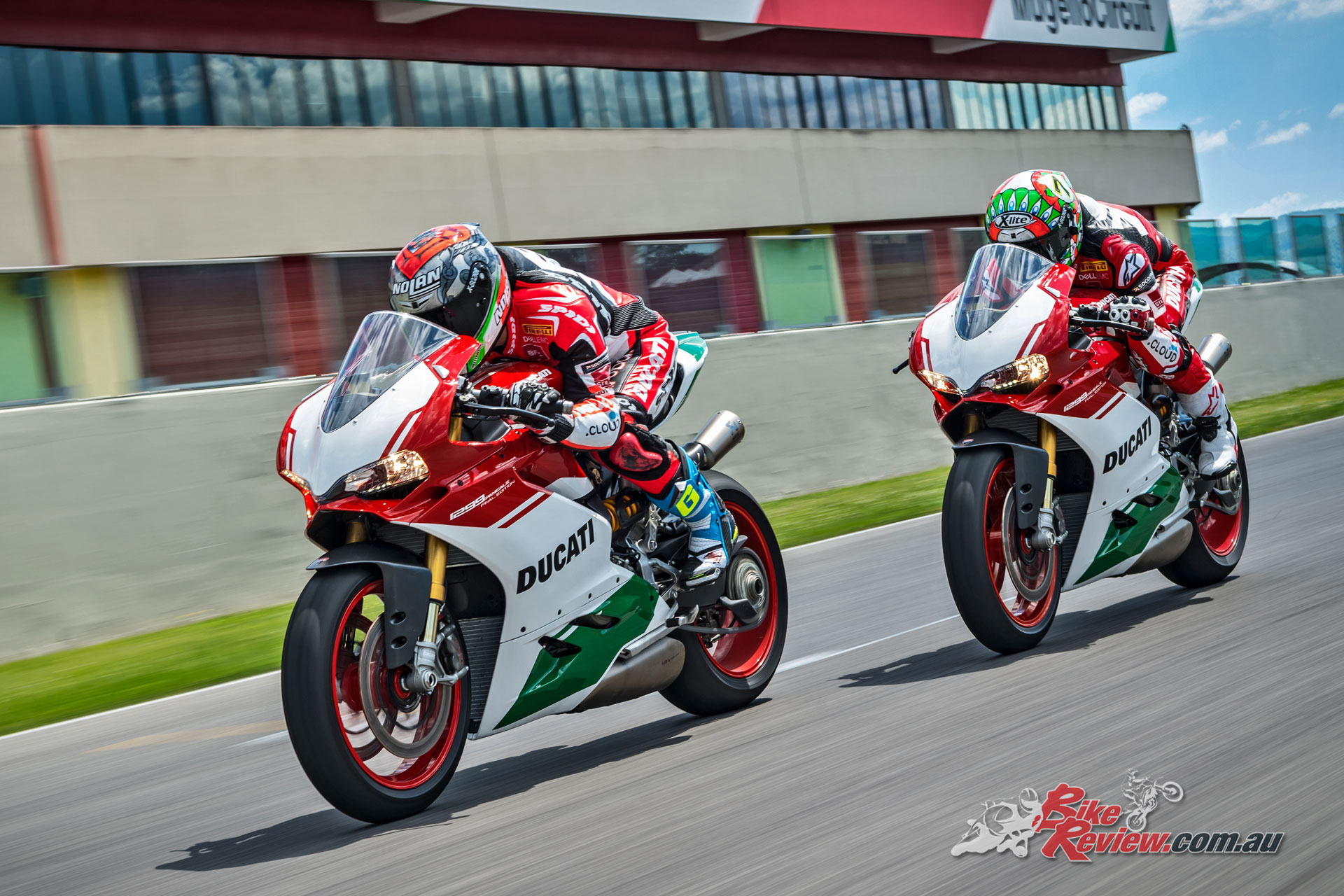 Developed in the hyper-competitive racing world, the ultra-compact monocoque structure has, by incorporating the airbox, played a pivotal role in keeping the dry weight of the 1299 Panigale R Final Edition down to just 179 kg**.

The compact, enhanced-strength die-cast aluminium monocoque structure uses the Superquadro engine as a stressed member of the frame. Attached to the cylinder heads, the monocoque protrudes forward to house the steering head bearings, contained in two aluminium bushes. 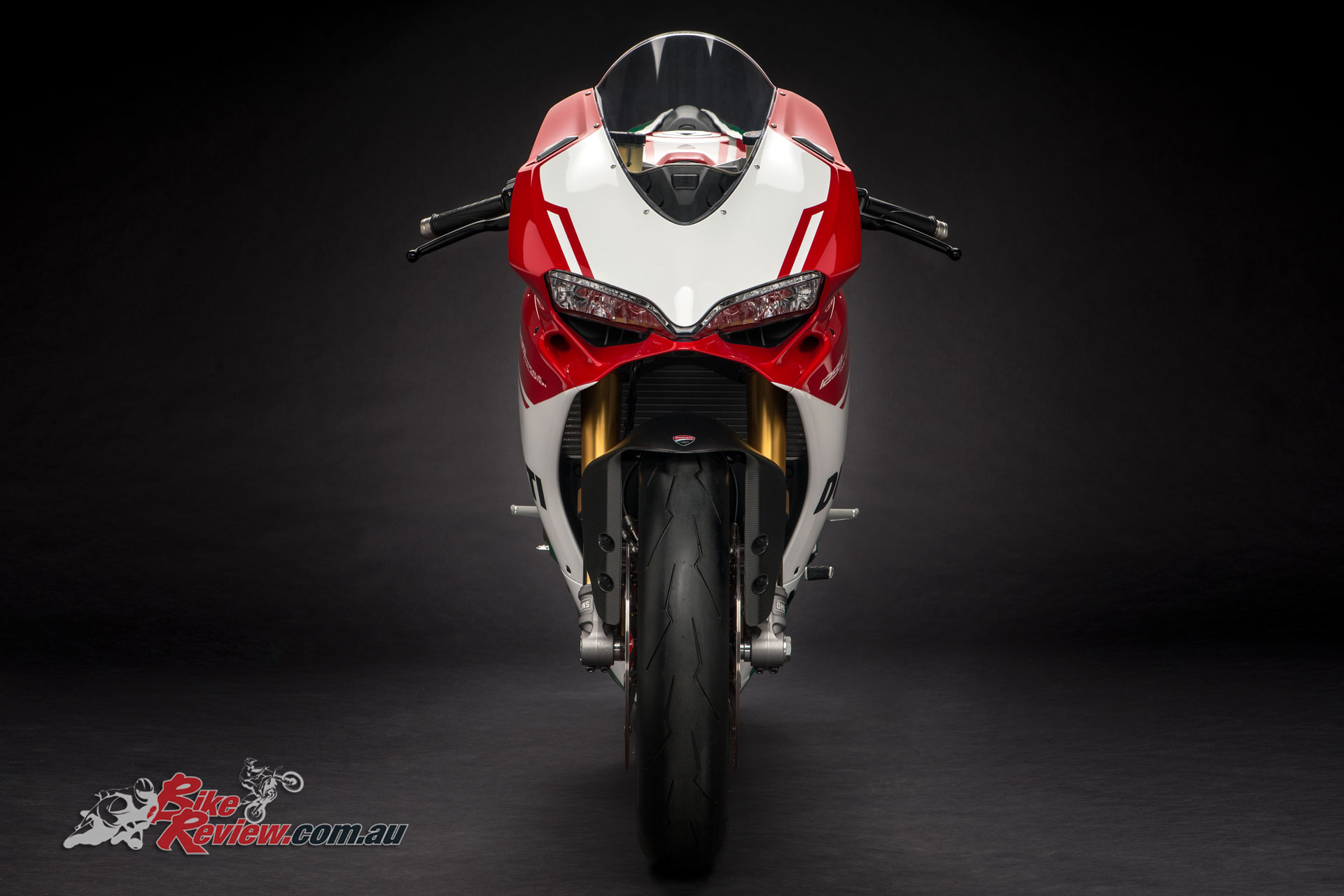 In addition to working as a frame, the monocoque also acts as an air-box. It contains, in fact, not just the air filter but also the throttle bodies and the fuel circuit, complete with injectors, and is sealed off by the aluminium fuel tank bottom. 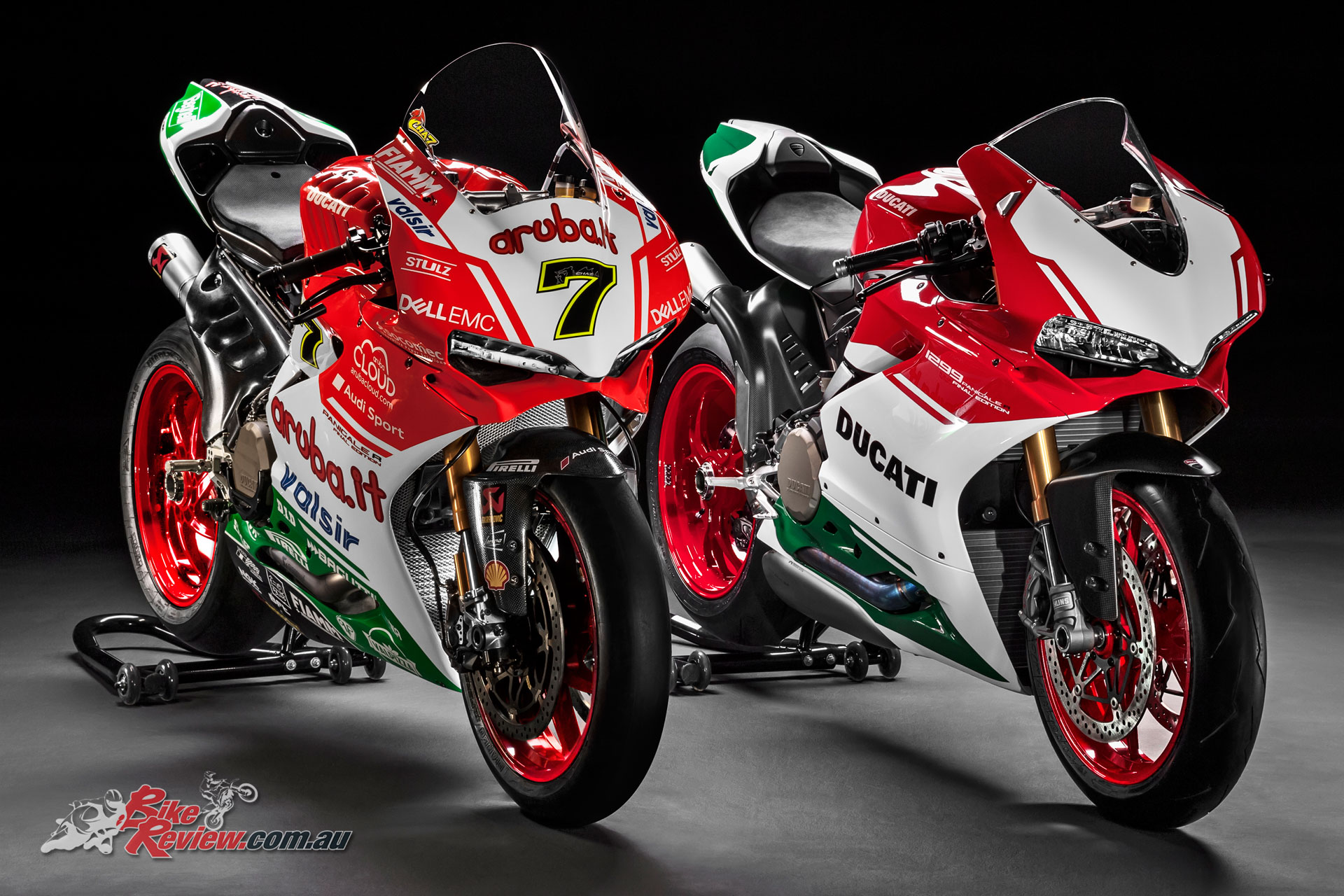 The dual Brembo Monobloc calipers, each mounting four pistons with a diameter of 30 mm, bite down on 330 mm discs to give exceptional braking effectiveness. Last but not least, the 1299 Panigale R Final Edition mounts the ABS Cornering system, managed by the ultra-light Bosch 9.1 MP control unit.
** Wet weight no fuel 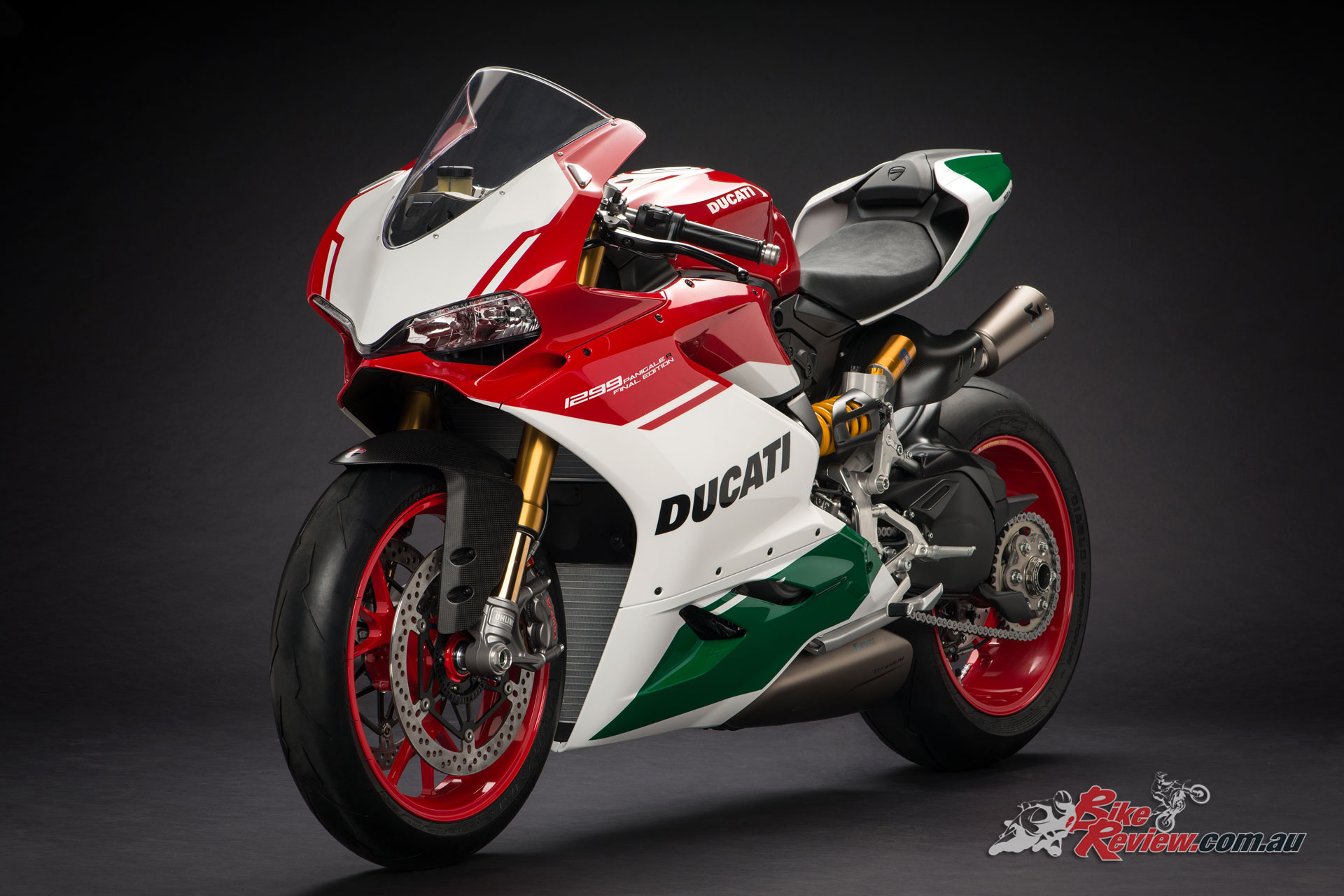 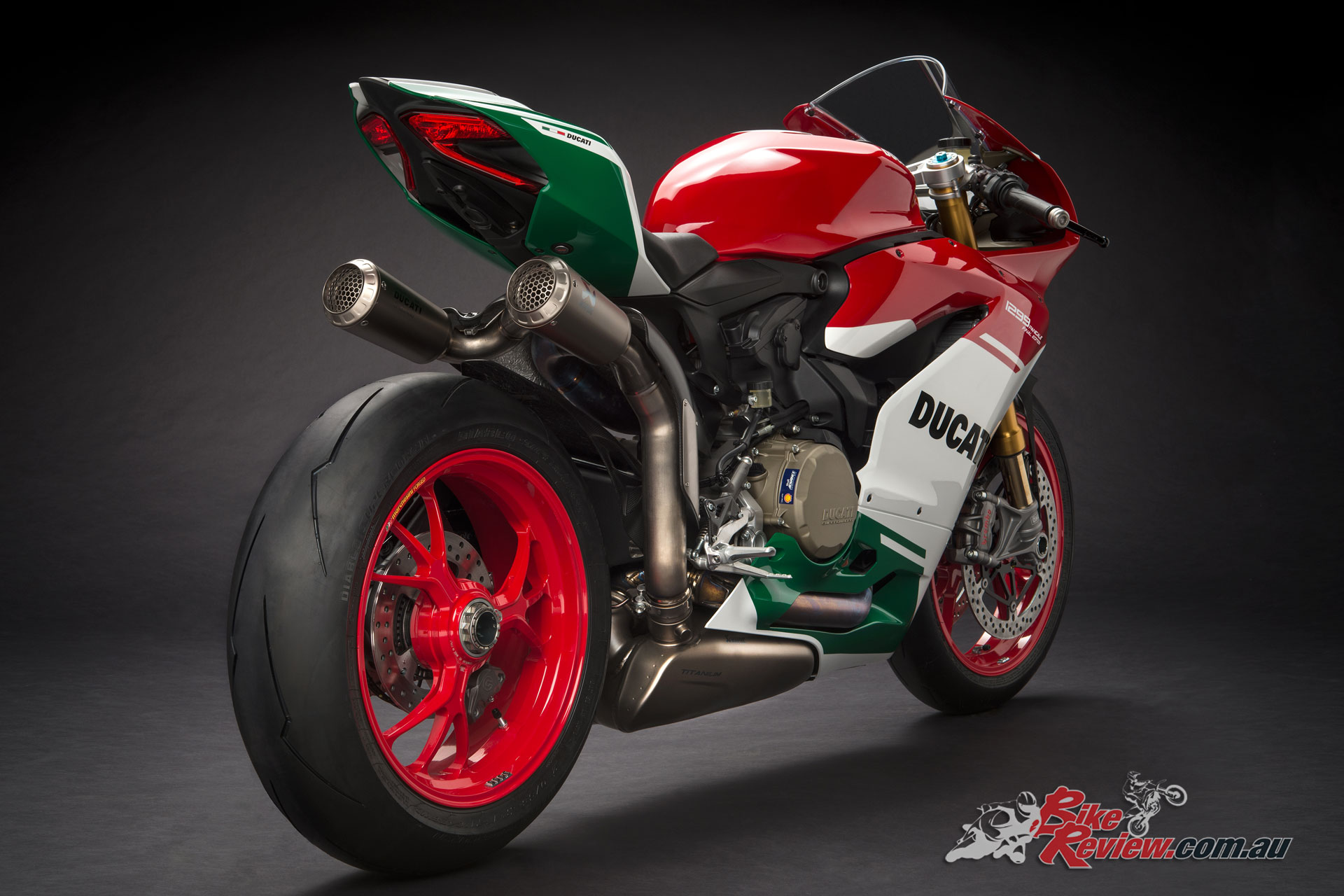