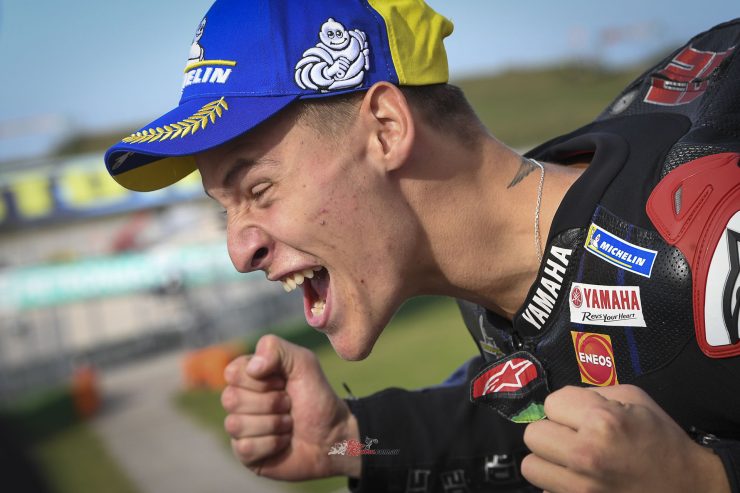 Fabio Quartararo is the 2021 FIM MotoGP™ World Champion! After a dramatic decider at the Gran Premio Nolan del Made in Italy e dell’Emilia Romagna, the Monster Energy Yamaha MotoGP rider sliced from 15th on the grid to fourth as sole rival for the crown, Francesco Bagnaia, crashed out from the lead. 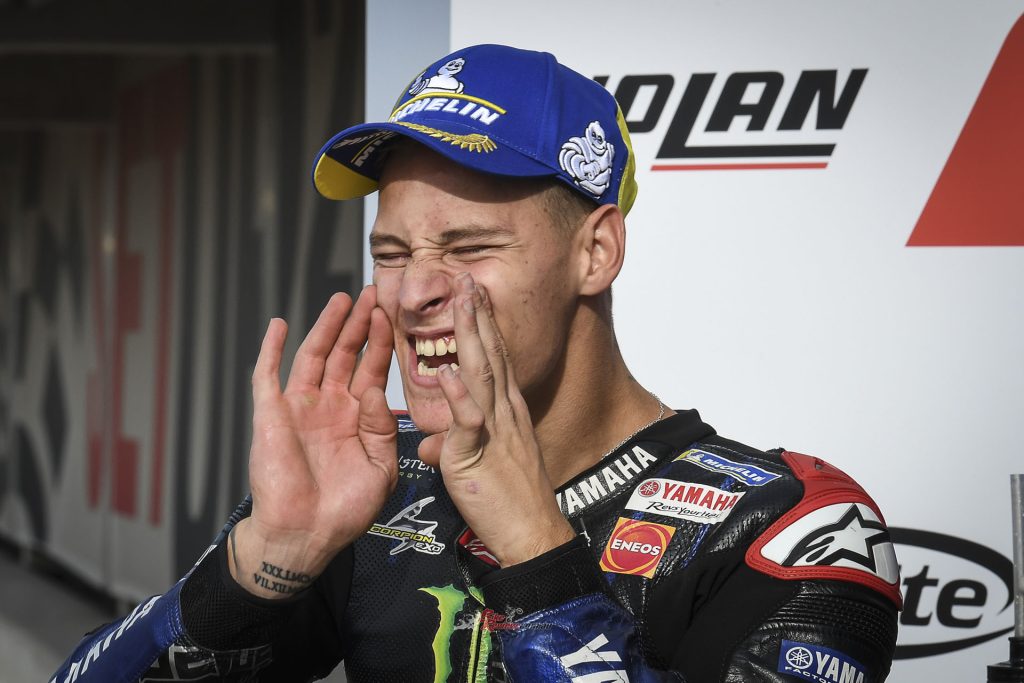 Quartararo is the first French premier class World Champion in history, he is also the first Yamaha rider to lift the crown since 2015.

Quartararo was four years old when his father Étienne – a former French 125cc Champion – gave him a Yamaha PW50. It’s a familiar story for future MotoGP™ riders, and although Quartararo’s rise would prove stratospheric, there were definitely a few challenges and difficult seasons along the way.

After getting that first bike, he began riding at different mini circuits around his home Provence-Alpes-Côte d’Azur region to master the basics before then going racing in Italy and Spain. And the success began early: the 50cc, 70cc and 80cc titles in the Catalan Championship and the pre-Moto3™ title in the Mediterranean Championship showed promise, but once the young Frenchman arrived in the FIM CEV Repsol, or the Spanish Moto3™ Championship as it was then, that promise exploded into something a lot bigger. 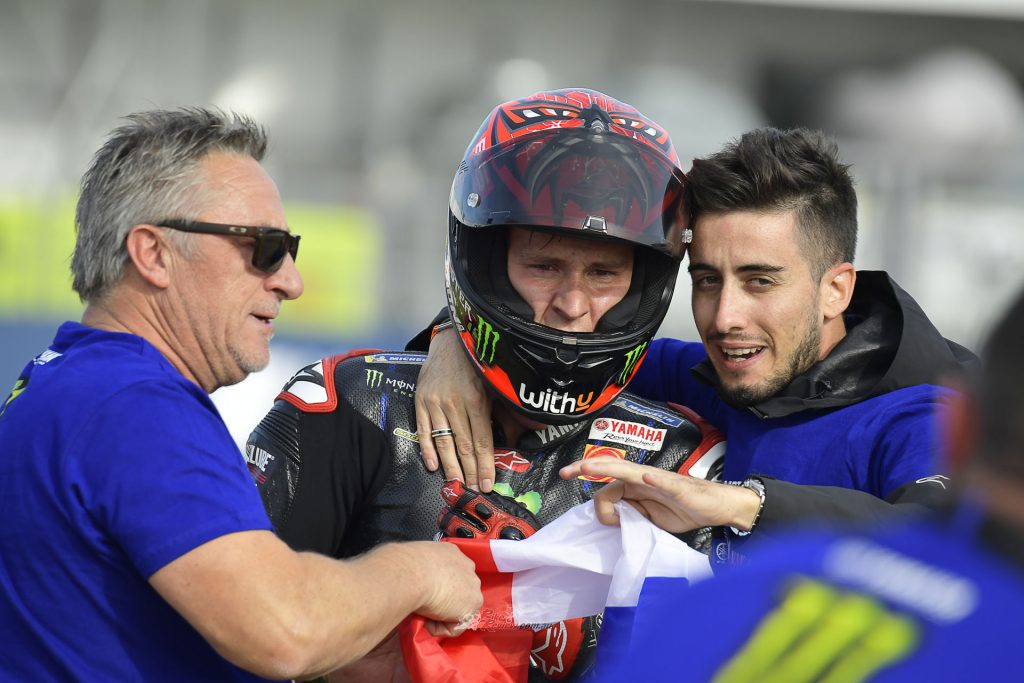 Fabio climbed the ranks quickly, cementing his dreams to become a MotoGP world champion one day.

Winning the series that has now become the FIM Moto3™ Junior World Championship is one of the biggest achievements for a young rider. So becoming the youngest to do it in 2013 and then defending the crown the year after even more so. That allowed the opportunity to move into Moto3 earlier than previously allowed and when he did, remaining in Estrella Galicia 0,0 colours, the momentum for the young Frenchman rolled on.

Quartararo debuted in Moto3™ with 7th in Qatar in 2015, and it took him only one more race to get on the podium as he took second in Texas. Two more top sixes followed, he was on pole at Jerez, and he was back on the podium at the TT Circuit Assen too. The whispers of “the new Marquez” grew into assured articles, ramping up the pressure on a rider who was already, despite the moniker from some corners, very much the first Quartararo. 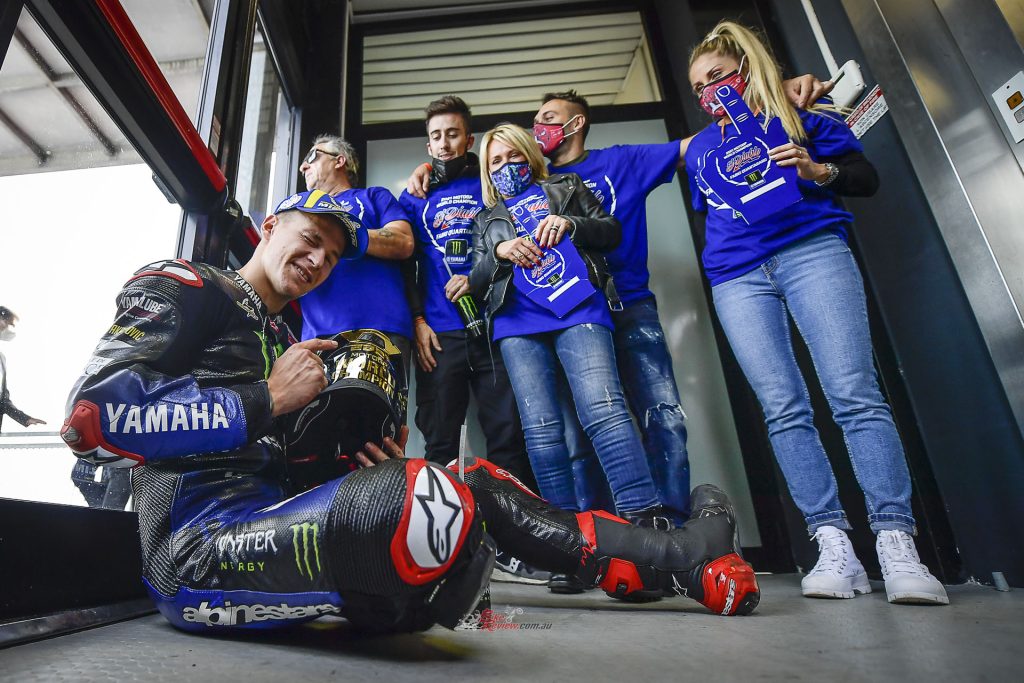 It took him only two races in Moto3 to get on the podium as he took second in Texas back in 2015.

Later that season however, the first key challenge of his Grand Prix career saw El Diablo break his ankle at Misano. That meant he missed most of the final races of the year, only returning at Valencia but not scoring. He ended the year in 10th, making a solid impression but not displaying the domination expected after his searing path to the Championship.

So, for 2016 there was a change as Quartararo moved to Leopard Racing alongside Joan Mir and Andrea Locatelli. However, the team fielded KTMs and that proved an extra challenge to adapt to as the Frenchman arrived from a rookie season contested on a Honda. And the points finishes kept coming, but only six top tens – and no podiums – saw the excitement of his early success give way to a tougher patch as ‘El Diablo’ looked to move forward. 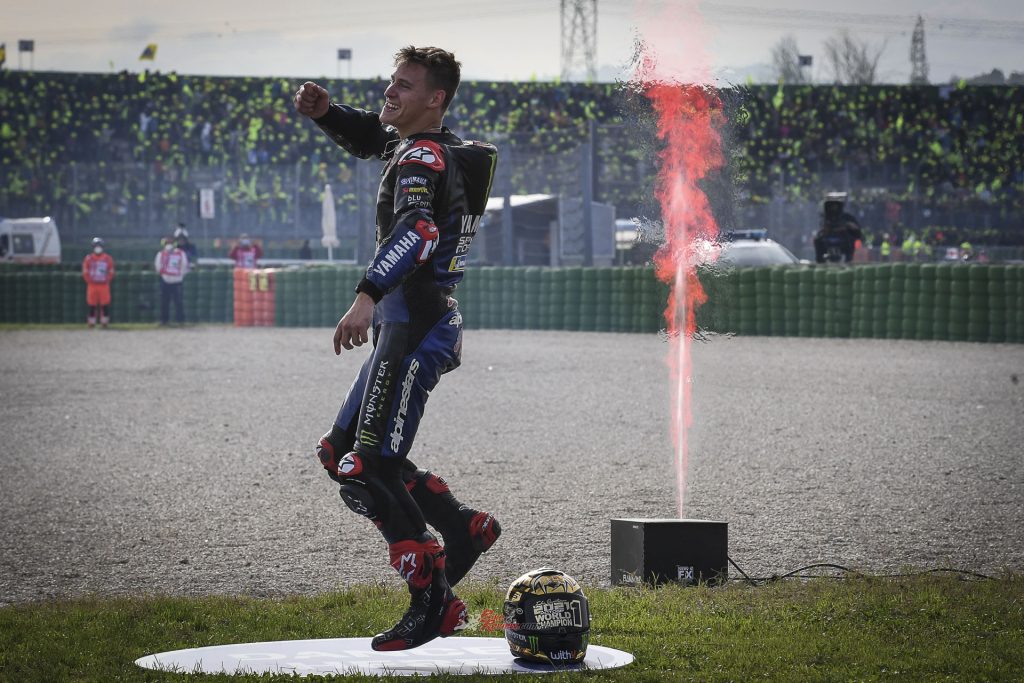 Moving up the ranks quickly again, it wasn’t long before Fabio was on a Moto2 bike.

At that point, under pressure to perform, a bigger change of direction was needed. Enter Éric Mahé, who came on board a Quartararo’s new manager, and a crucial decision that started to build the foundations of the future premier class crown: for 2017, Quartararo would move to Moto2, taking on a new challenge.

It started well, with a seventh place finish on his intermediate class debut in Qatar – the same result that, in Moto3™, had prefaced a first podium soon after. But this time around there was no rostrum around the corner and 2017 swiftly became his toughest season yet, culminating in the Pons team and Quartararo parting ways for 2018. 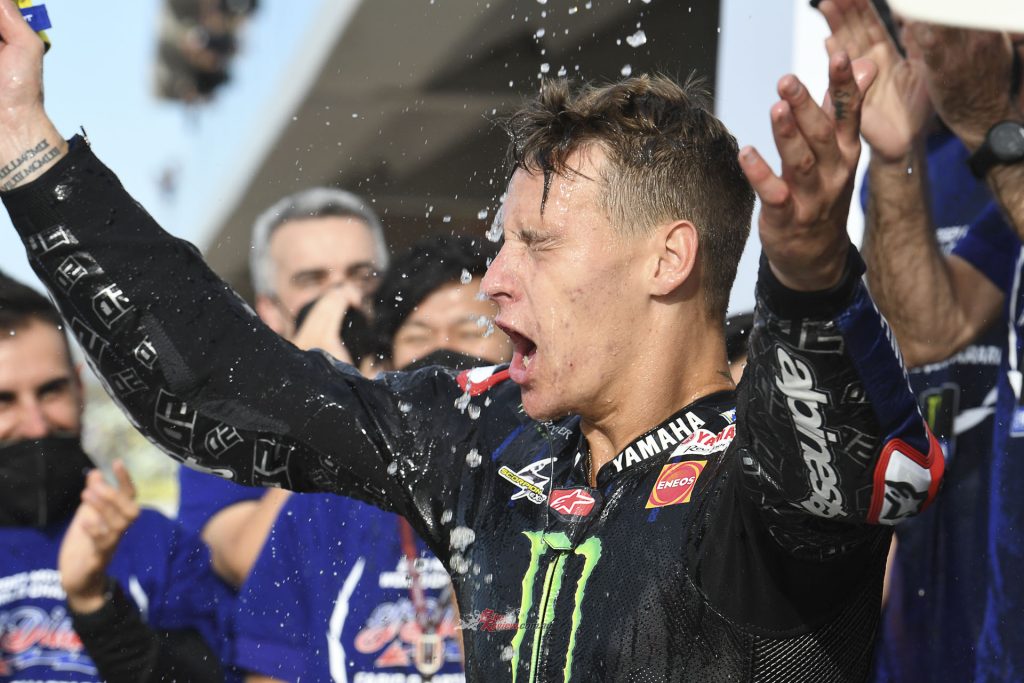 “No one had an answer for the number 20, and he took his first Grand Prix win by nearly two and a half seconds.”

Enter another key figure in the rise of El Diablo: Luca Boscoscuro. El Diablo moved to the Speed Up team with Boscoscuro at the helm for 2018, and on Moto2™ take two it actually started worse: a 20th in Qatar and 22nd in Argentina. But then it started to come together: a 15th at COTA, a 10th at Jerez, an 8th at Le Mans… 11th at Mugello interrupted the pattern, but it was another solid result as Quartararo started to get back in the groove.

At Catalunya, the stars aligned. Saturday saw the Frenchman take his first Moto2™ pole and on Sunday, he unleashed the first truly dominant performance of his Grand Prix career, fastest lap included. No one had an answer for the number 20, and he took his first Grand Prix win by nearly two and a half seconds. Next time out at Assen, it was another podium too. The return to the rostrum and that first victory had seemed a long time coming, but the timing couldn’t have been more perfect. 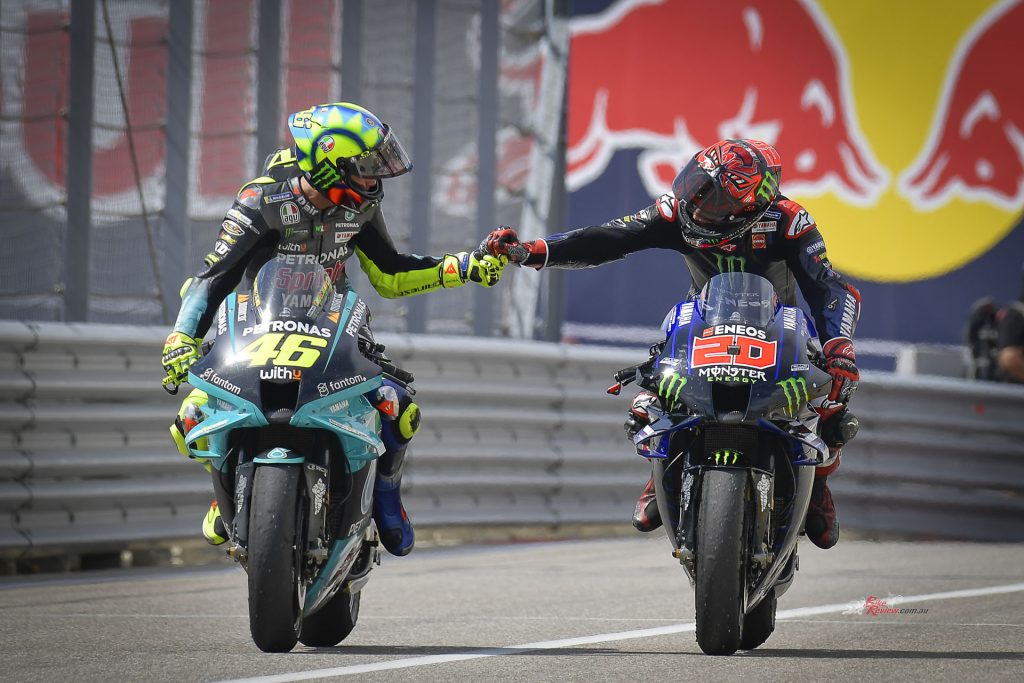 It wasn’t long before he was on a MotoGP bike with Petronas Yamaha SRT, eventually swapping spots with Rossi.

By the time Quartararo took that win, there appeared to be a split between those who’d been waiting for the success they saw as inevitable and those who’d written the Frenchman off. The new Petronas Yamaha SRT outfit, and Yamaha boss Lin Jarvis, were definitely not the latter and at Silverstone it became official: Quartararo would join MotoGP™ in 2019. So he finished the 2018 Moto2™ season with a solid run of form and then left the intermediate class to saddle up in MotoGP™… and the rest is history in the best possible way.

On the pace from the off, Quartararo’s stunning debut season silenced the doubters. Fast and consistently so, and somehow making it look easy, it wasn’t long until the number 20 was an  established, expected presence at the front. Jerez saw him become the youngest polesitter in the premier class, and he took five more that season. He also came up against then seven-time World Champion Marc Marquez in some incredible last lap duels – not quite defeating the number 93, but making life impressively difficult. Seven podiums saw Quartararo end the year fifth overall, take Rookie of the Year and the overall top Independent Team rider title. Fabio Quartararo had arrived. 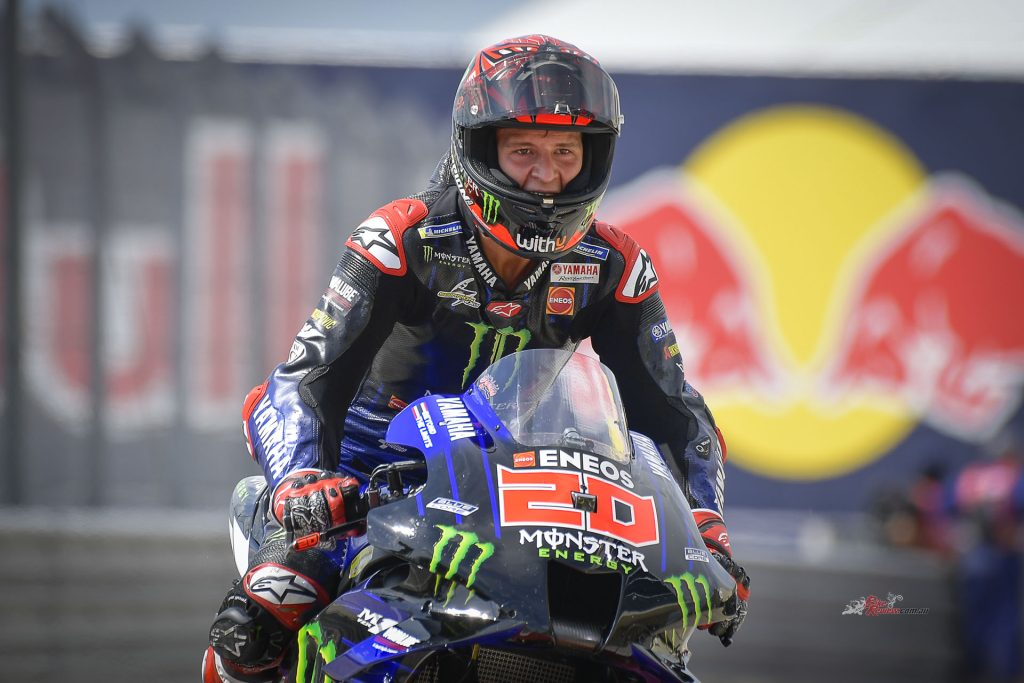 “In 2020, it started with a dream double win at Jerez and the Yamaha rider seemed the man to beat.”

In 2020, it started with a dream double win at Jerez and the Yamaha rider seemed the man to beat. But after some twists and turns, it wasn’t until Barcelona that El Diablo got back on top. Some more struggles later, the crown was instead nabbed by Joan Mir at Valencia and Quartararo went into winter pushing to reset and reload, vowing to iron out the kinks and fight for the crown again.

That he did, and he did it in Monster Energy Yamaha MotoGP colours as he took on a new chapter with the factory Yamaha outfit. Off the podium in Qatar to start the season, he hit back in Doha to take his first victory of the year. At Portimão he was in a league of his own for another win, but then a speed bump appeared at Jerez as the Frenchman suffered with serious arm pump, taking only a handful of points. Surgery ahead of his home Grand Prix wasn’t the best run up to the event, but still El Diablo took a podium at Le Mans and then another win at Mugello. 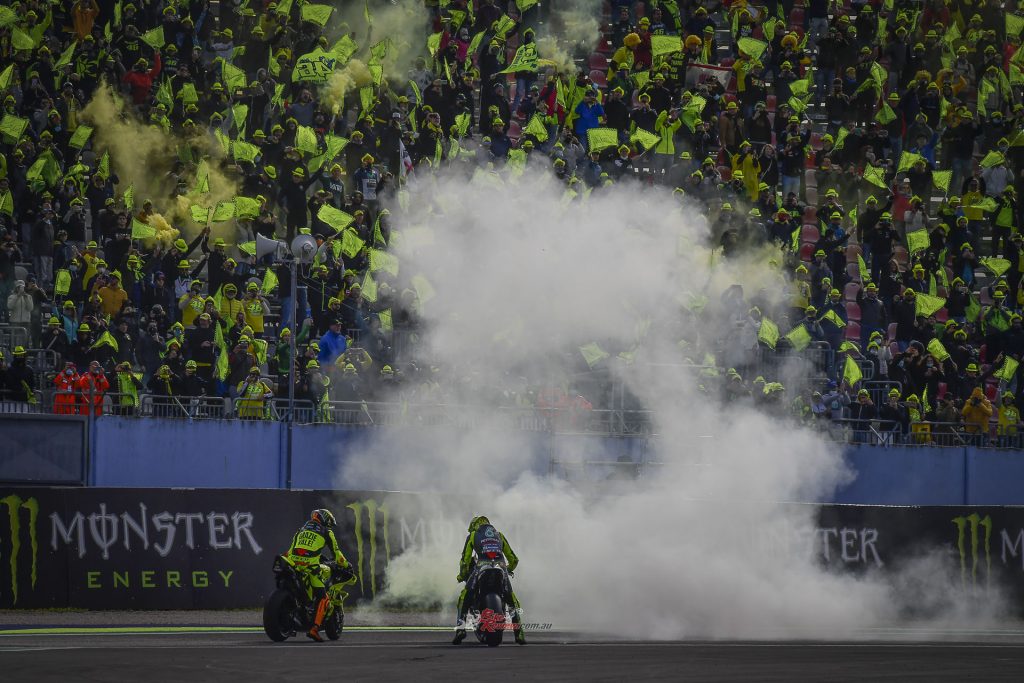 With five victories, ten podiums and a sublime season of speed, Fabio Quartararo is the history-making 2021 MotoGP™ World Champion!

Barcelona saw a little drama unzipped, but a solid 10 points and another rostrum in Germany prefaced victory at Assen, sending the number 20 flying high into the summer break. He was a man on a mission, although next up was Styria – Ducati and KTM territory. But still, one podium and then a salvage job of seventh in a crazy Austrian GP later, Quartararo remained firmly holding the cards as the paddock returned to Silverstone.

It had been a while since MotoGP™ had raced the British behemoth and not the best event for Quartararo when they did, but 2021 was a different story: one of domination. Another 25 points in the bag saw him increase his lead again, and after a tougher Aragon, the Frenchman took a little more risk to push key rival Bagnaia at Misano but ultimately settled for second as crunch time approached. Second in Texas, behind Marquez but ahead of Bagnaia, turned crunch time into match point at the Emilia-Romagna GP. 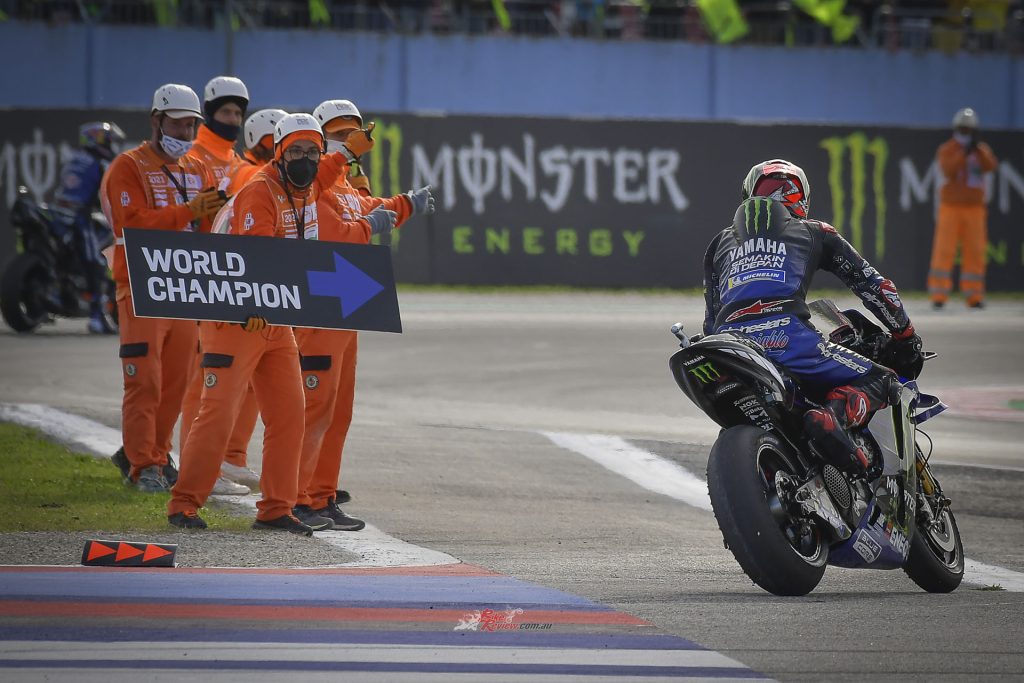 With a 52-point advantage, starting 15th and seeing Bagnaia on pole wasn’t ideal, but El Diablo kept calm and carried on, slicing back through the pack to fourth. It wouldn’t have been enough had Bagnaia not crashed, but the Ducati rider’s final stand was ultimately just over the limit – guaranteeing Quartararo the crown with two races spare. 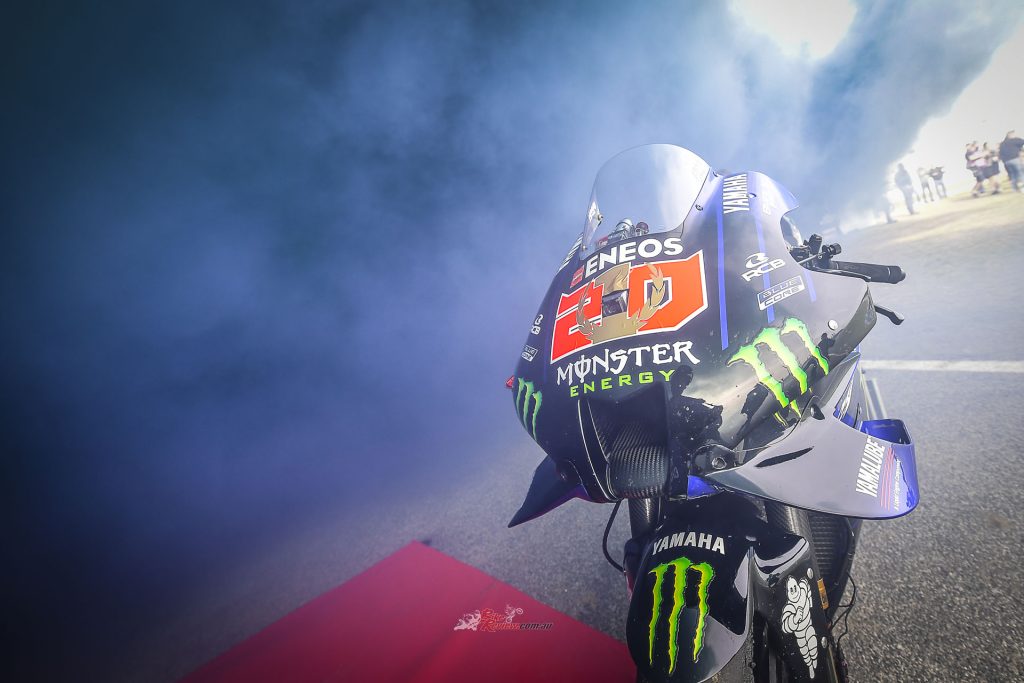 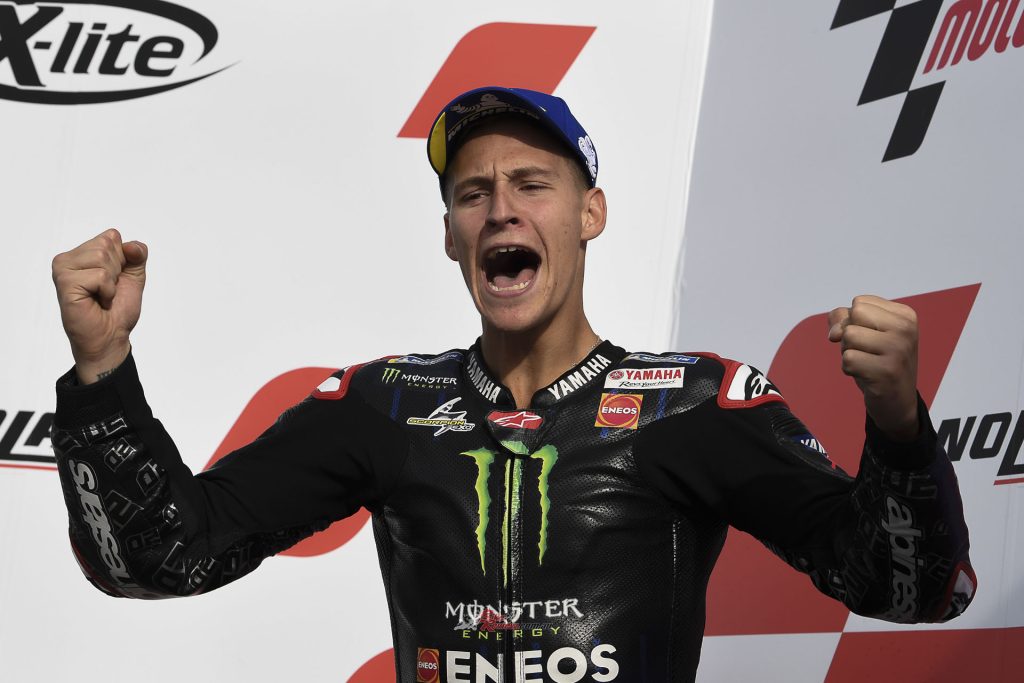 Fabio Quartararo: “I already don’t have my normal voice just a few hours after, I’ve cried a lot an screamed a lot! It feels amazing. When I crossed the finish line I thought about all the tough moments I had, and to be World Champion in MotoGP is something I never expected when I was in bad situations only a few years ago. So right now I feel like I’m in a dream and I don’t realise what’s happening to me right now!

“Of course I had extra nerves, I never started further back than P11 in MotoGP, and I’m starting P15 in one of the most important races of my career! We chose the safe, let’s say, tyres but for us the hard would have been better and I think the podium was there with the hard. I didn’t have stability when I was with the group, I couldn’t overtake. But I’m really happy with my race, even if I hadn’t won the Championship it’s great to finish P4. Super happy about the race and of course with the Championship it’s something extra. 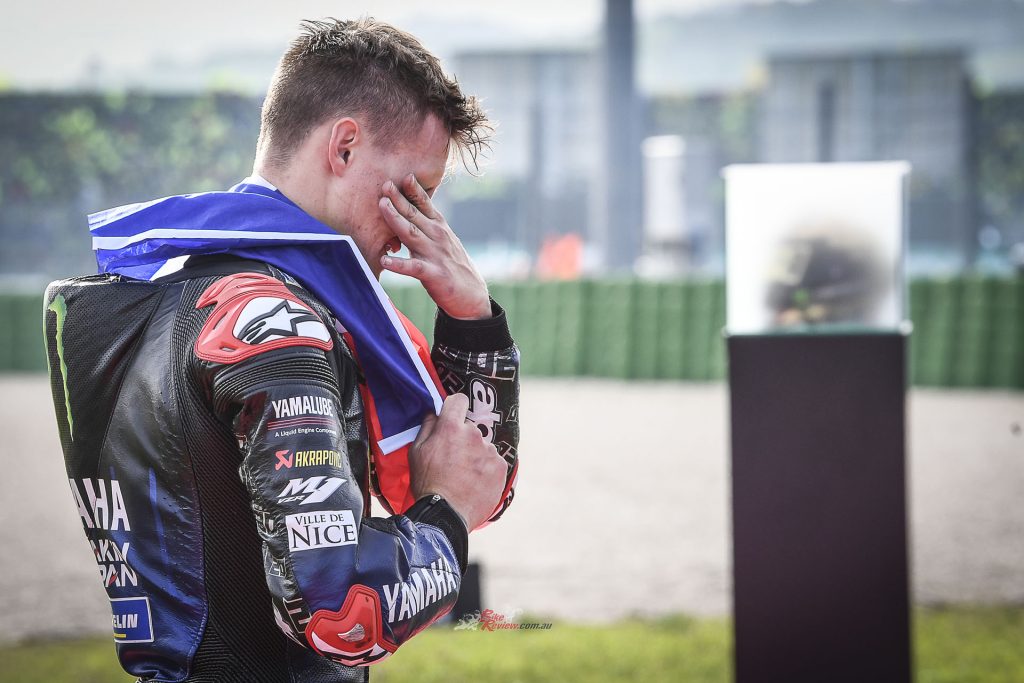 An emotional victory for the Frenchman, as he takes home the championship with two rounds to spare.

“Just before starting the race I was with Tom in the office and I was nervous, feeling stressed and he said, ‘just think about the last three races you had last year’. They were a total disaster and I just wanted to finish the Championship whatever the position was. And today I started the race that made me World Champion. I think everything that happened last year helped me a lot to win the title today. Thanks to the people for supporting me in these tough moments, I think I learned a lot during these years in MotoGP and still have a lot to learn to achieve more results like that.

“To be honest, last year we fought to have the factory bike but with Covid and everything, the 2019 bike was better. But with the 2021 bike I felt much better, the feeling with the front is what has made me win this year, I think. The feeling I had. We know the power is something we have to work on, but the feeling on the braking to overtake – not this race but in general – has been much higher than 2019 and 2020. Yamaha has worked a lot, we still have a lot to improve for next year because we know that power is something important, but right now with the bike I was feeling like on, I’m enjoying riding. Also today I had a lot of struggles with the front but I still enjoyed it a lot, and that was the most important thing of the day.”