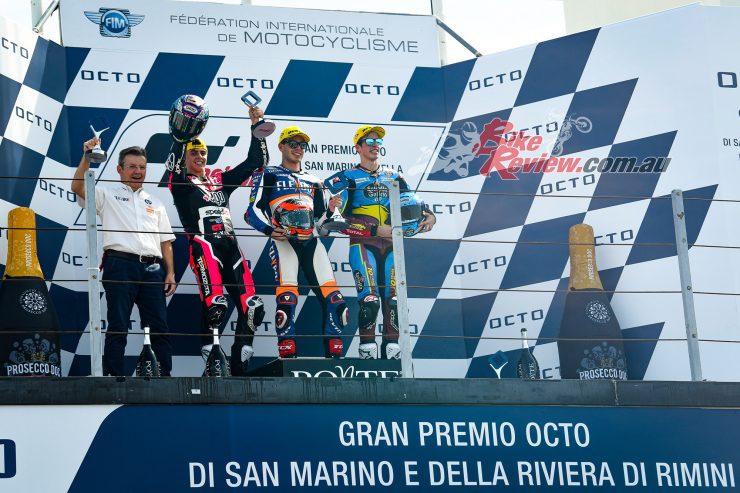 Fast pace and a wild race as Fernandez wins Moto2

Augusto Fernandez (FlexBox HP 40) secured his third win of the season as the Moto2 race at the GP Octo di San Marino e della Riviera di Rimini came down to the wire, with the Spaniard going toe to toe with Fabio Di Giannantonio (+Ego Speed Up) on the final lap to deny the home hero. Championship leader Alex Marquez (EG 0,0 Marc VDS) completed the podium, a little back from the controversy. 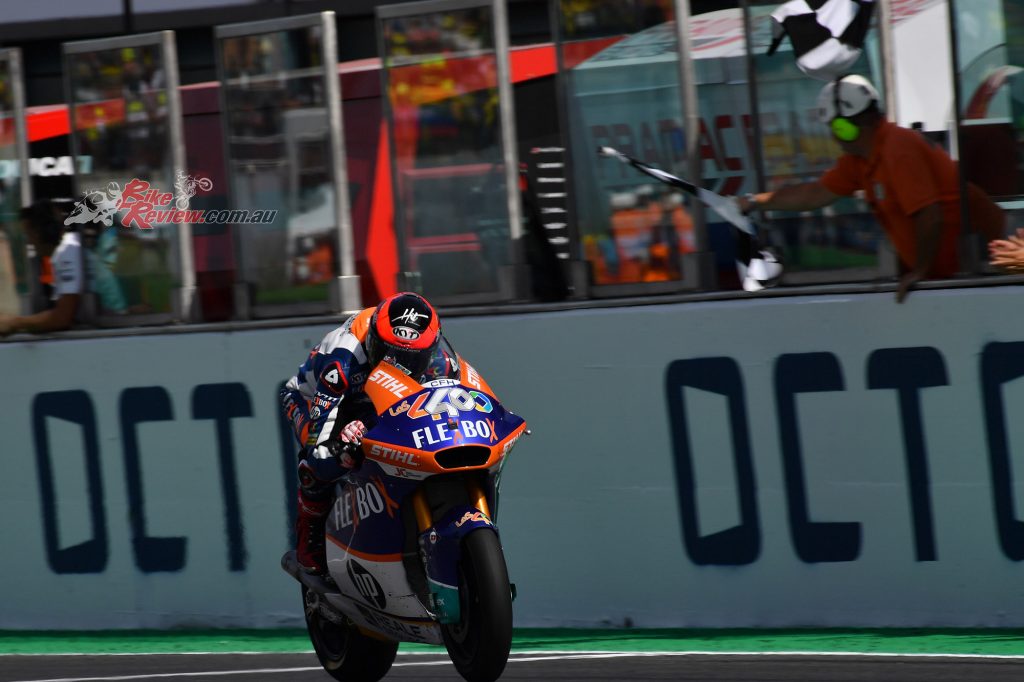 Di Giannantonio held position off the line as the Italian grabbed the holeshot from pole position, with Marquez losing out slightly as the lights went out as the Spaniard initially dropped to P6. Fernandez slotted into second behind ‘Diggia’, with Tom Lüthi (Dynavolt Intact GP) getting a lightning start from P7 to climb to P3.

Home hero Di Giannantonio had Fernandez glued to the back of him and was pushing in the early stages, the Italian out the seat coming out of Turn 2 on Lap 2 in a lucky close call for the race leader. Despite that, the rookie set the fastest lap of the race as the top two started to stretch away…

Meanwhile, Marquez had recovered to get himself up to third after passing Lüthi, with Remy Gardner (ONEXOX TKKR SAG Team) losing the front at Turn 10 to allow the duo through – the Australian just staying on board his Kalex. Marquez was then chasing Di Giannantonio and Fernandez, with the gap over half a second and Lüthi going with him.

On Lap 6, the top four were nearly two seconds clear of Gardner and Xavi Vierge (EG 0,0 Marc VDS), with Di Giannantonio keeping his cool at the front. However, Lap 9 saw Fernandez make a first move. The Spaniard swooped around the outside at Turn 1 to have the inside line at Turn 2 – a classic Misano move – but Di Giannantonio didn’t let P1 go without a fight. The Speed Up rider had the inside line for Turn 3 and although Fernandez would get him back to lead, ‘Diggia’ fought back at Turn 8 and Marquez pounced on his title rival, too. Fernandez was down to P3, with Di Giannantonio then holding a half-second advantage over the Championship leader.

With 13 laps to go, Fernandez was back into P2 as Di Giannantonio held a 0.7 lead. But the Kalex rider had the bit between his teeth as he hunted the Speed Up, clawing back Di Giannantonio’s advantage to half a second on the next lap. The gap then stayed fairly constant between the top two, with Marquez just losing touch to sit around a second off the lead. But with seven laps left, Fernandez was closer, seemingly having an advantage in the latter half of the lap, with Di Giannantonio holding the edge in the first half. But then the Spaniard had a huge front-end scare at Turn 10…and ‘Diggia’ was handed a track limits warning.

Five to go, four to go, three to go. Di Giannantonio was holding firm with Fernandez swarming behind: a dream debut home win vs vital points in the Championship. Who would prevail? Fernandez was piling on the pressure with two laps remaining and heading onto the final lap there was nothing between them. Fernandez then pounced, taking the outside line around Turn 1 to grab the inside at Turn 2 – but he was in hot and Di Giannantonio got the switchback once again. 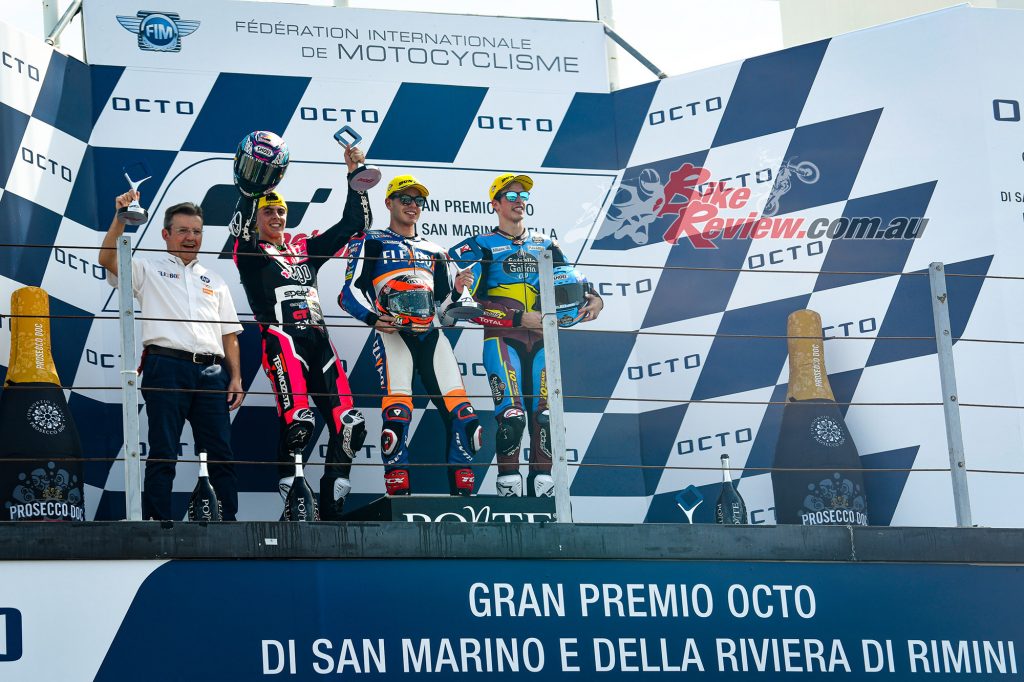 The latter then made a small mistake on the exit of Turn 4 to give Fernandez – not that he needed it – that little extra scent of the win. Turn 8 passed by, as did Turn 10. But, with a good run out of the tight right-hander onto the back straight, Fernandez was in the tow. The Spaniard ran out a little wide at Turn 11 but then, the number 40 went for it. Slight contact and elbows out, Fernandez sat Di Giannantonio up and that was all she wrote, with the Spaniard’s aggression moving him to within 26 points of Marquez’ lead.

Marquez takes a podium away from Misano and heads to his home GP at MotorLand Aragon still in control, with Lüthi not quite keep tabs on the number 73 as the Swiss rider picked up his best result since Assen in P4. Sam Lowes (Federal Oil Gresini Moto2) took his best finish of the season in fifth after a solid ride at his team’s home race, the British rider finishing just ahead of Red Bull KTM Ajo’s Brad Binder after an impressive ride saw the South African coming from P16 on the grid. +Ego Speed Up’s Jorge Navarro crossed the line eighth after starting from 15th, another who made progress through the field.

Xavi Vierge (EG 0,0 Marc VDS) made a good start but eventually slipped down to eighth place, the Spaniard beating home rider Enea Bastianini (Italtrans Racing Team) by just over a second – although the rookie returning from injury took a top ten on his 100th GP start. Said duo were able to capitalise on Lorenzo Baldassarri’s (FlexBox HP 40) late long lap penalty for exceeding track limits as he closed out the top 10 at his home GP.

“If it was an aggressive move, I’m sorry. I don’t think so. It’s the last lap and we’re fighting for the win. I touched the green but it’s because I was really close to his rear tyre at Turn 11 where it’s really fast. I thought about going inside or outside, but inside was impossible because of the lean angle so I went outside and touched the green. We have three times on the green before a warning and I didn’t do it three times.”