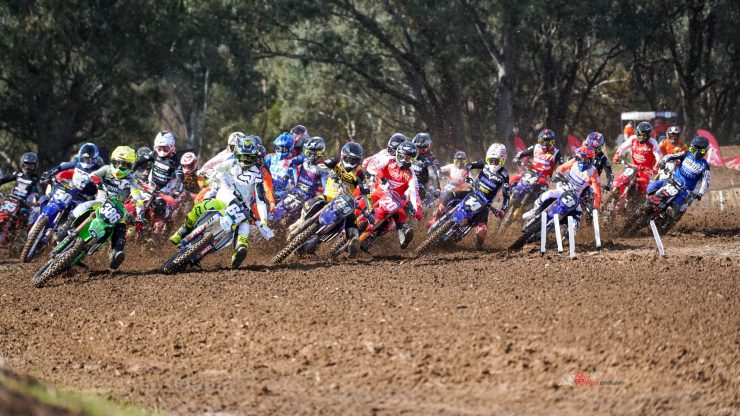 Ferris, Malkiewicz and Williams Top The Podium At ProMX, Wodonga

The Wodonga track in Victoria played host to Round 3 of the ProMX Championship. Riders and teams were presented with a contrasting race track that as fast as it was treacherous, providing race fans with intense racing action and mistakes from many of the elite ProMX riders across the day.

Wodonga in Victoria played host to Round 3 of the Penrite ProMX Championship presented by AMX Superstores.

THOR MX1
In the opening THOR MX1 moto, HRC Honda Racing Australia’s Dean Ferris would assert himself early on lap 1 to the front of the field. The first lap would also see Kirk Gibbs crash out of contention with Aaron Tanti colliding with the downed KTM rider’s bike, leaving both riders on the floor and at the back of the pack. Husqvarna Racing Australia’s Todd Waters latched onto the back of Ferris and the pair ran in their all too familiar 1st and 2nd positions that we have seen so many times before. To make things even more interesting, GO24 KTM’s Brett Metcalfe joined the veteran freight train out front, the trio sprinting away from the rest of the field.

Waters would pass Ferris temporarily 8 minutes in, however Ferris would return the favour in exactly the same spot 5 minutes later. Ferris would lead the trio of Australian Motocross legends to the chequered flag in an epic last lap battle, with Todd Waters in 2nd, Brett Metcalfe in 3rd, GAS GAS Australia’s Hayden Mellross 4th and Aaron Tanti in 5th. 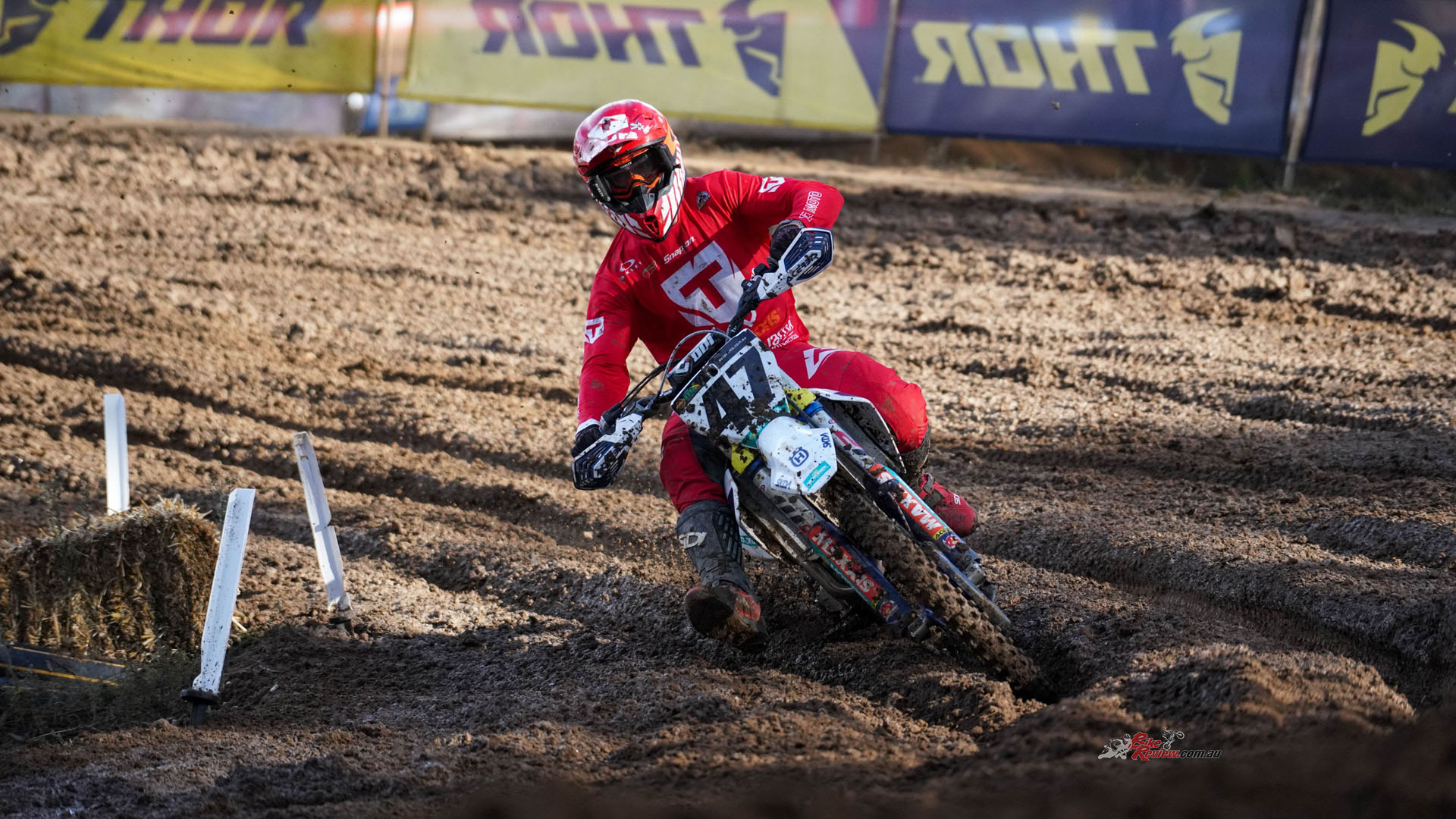 For the first time in the 2022 ProMX Championship, the back to back motos factored into race day proceedings for THOR MX1 in the afternoon.

For the first time in the 2022 ProMX Championship, the back to back motos factored into race day proceedings for THOR MX1 in the afternoon. In back to back part 1, Ferris would execute the holeshot with Metcalfe in 2nd, Tanti in 3rd and Gibbs in 4th. The short moto format would see the riders stay in this formation until late in the moto when Metcalfe would cross rut and crash following the first turn area, leaving the door open for Tanti and Gibbs to move forward. At the chequered flag it was Ferris taking the win from Tanti in 2nd and Gibbs in 3rd. Todd Waters put on an incredible charge from a first turn crash all the way back to 5th in the short back to back moto format.

In the 2nd back to back moto, it was again Ferris who executed a perfect holeshot. Aaron Tanti pushed his way to the lead spot for the majority of the moto, however down the stretch Ferris was too strong, passing Tanti back with a few minutes to go. At the chequered flag it was Ferris claiming a perfect day with another 1st, with Tanti in 2nd, Waters in 3rd, Metcalfe 4th and Mellross 5th. Dean Ferris would close up a huge points margin to just 11 points out of the Championship lead with the THOR MX1 overall victory at Wodonga. New Red Plate holder Todd Waters was 2nd overall and Aaron Tanti was 3rd overall, sitting just 1 point out of the Red Plate.

PIRELLI MX2
In Pirelli MX2, it appeared to be business as usual after HRC Honda Racing Australia’s Wilson Todd jumped to the front of the field early in lap 1, passing holeshot winner Husqvarna Australia’s Dylan Wills. However on lap 3, Todd would uncharacteristically crash out of the lead, passing the number 1 spot to Serco Yamaha’s Jesse Dobson. 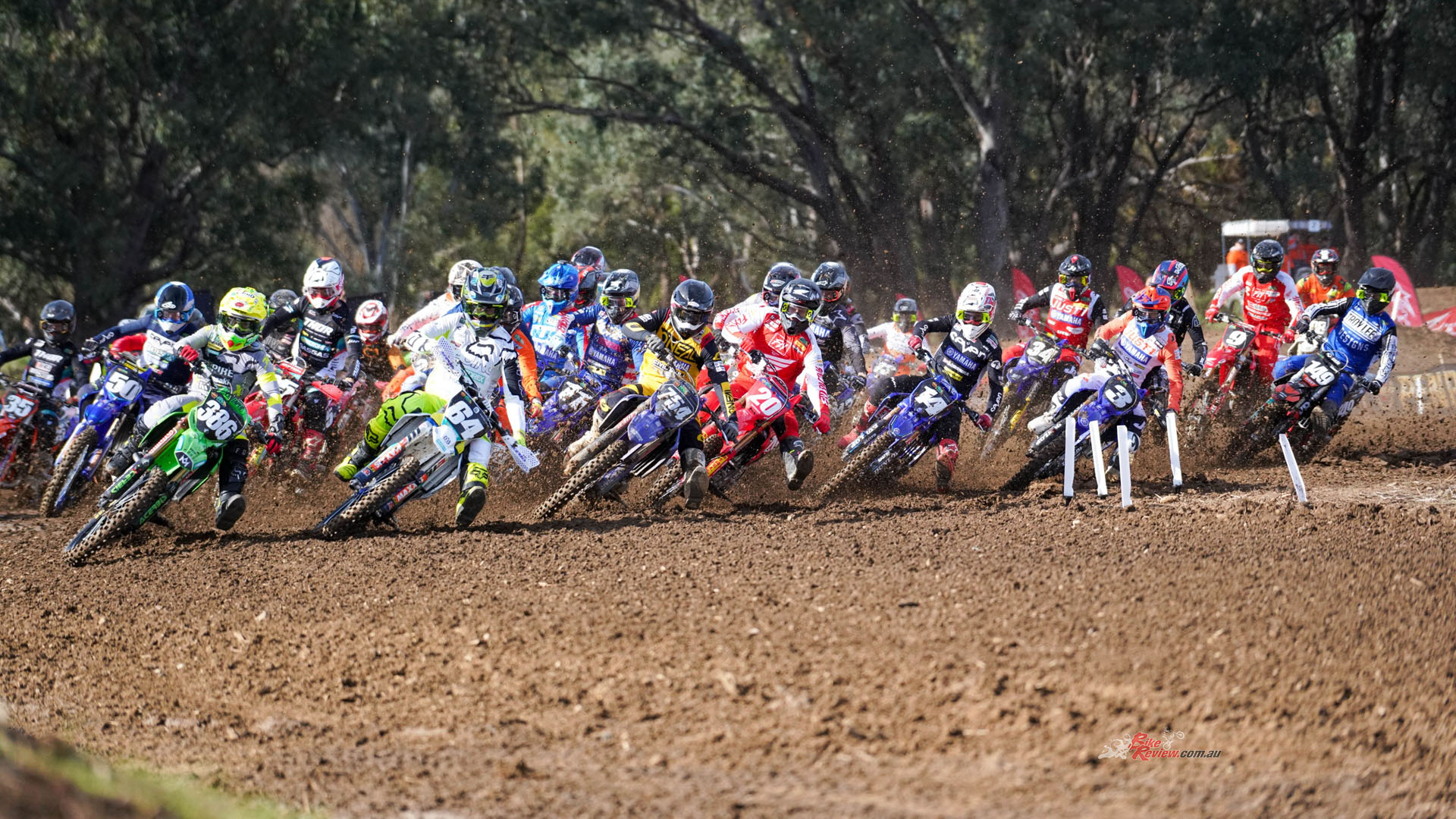 A procession of Yamaha’s battled for the podium placings throughout the moto with Yamalube Yamaha’s Rhys Budd, Serco Yamaha’s Bailey Malkiewicz and WBR Yamaha’s Ryder Kingsford all in tow. At the end of moto 1, it was Malkiewicz who emerged victorious, ahead of Ryder Kingsford and Rhys Budd. Wilson Todd would charge from 14th back to 4th and Jesse Dobson would crash out sustaining a dislocated shoulder at the mid point of the race.

Moto 2 was more of a familiar affair, with Todd holeshotting and after a brief battle with GAS GAS Australia’s Noah Ferguson, beginning his trademark inching away from the field of Pirelli MX2 riders. Malkiewicz and Larwood would battle for 2nd position with Larwood eventually pulling away from his bLU cRU counterpart. At the chequered flag, it was Todd taking 1st with Larwood in 2nd and Malkiewicz in 3rd. Liam Andrews on the Ride Red Honda would place a season best 4th with Ryder Kingsford placing 6th. 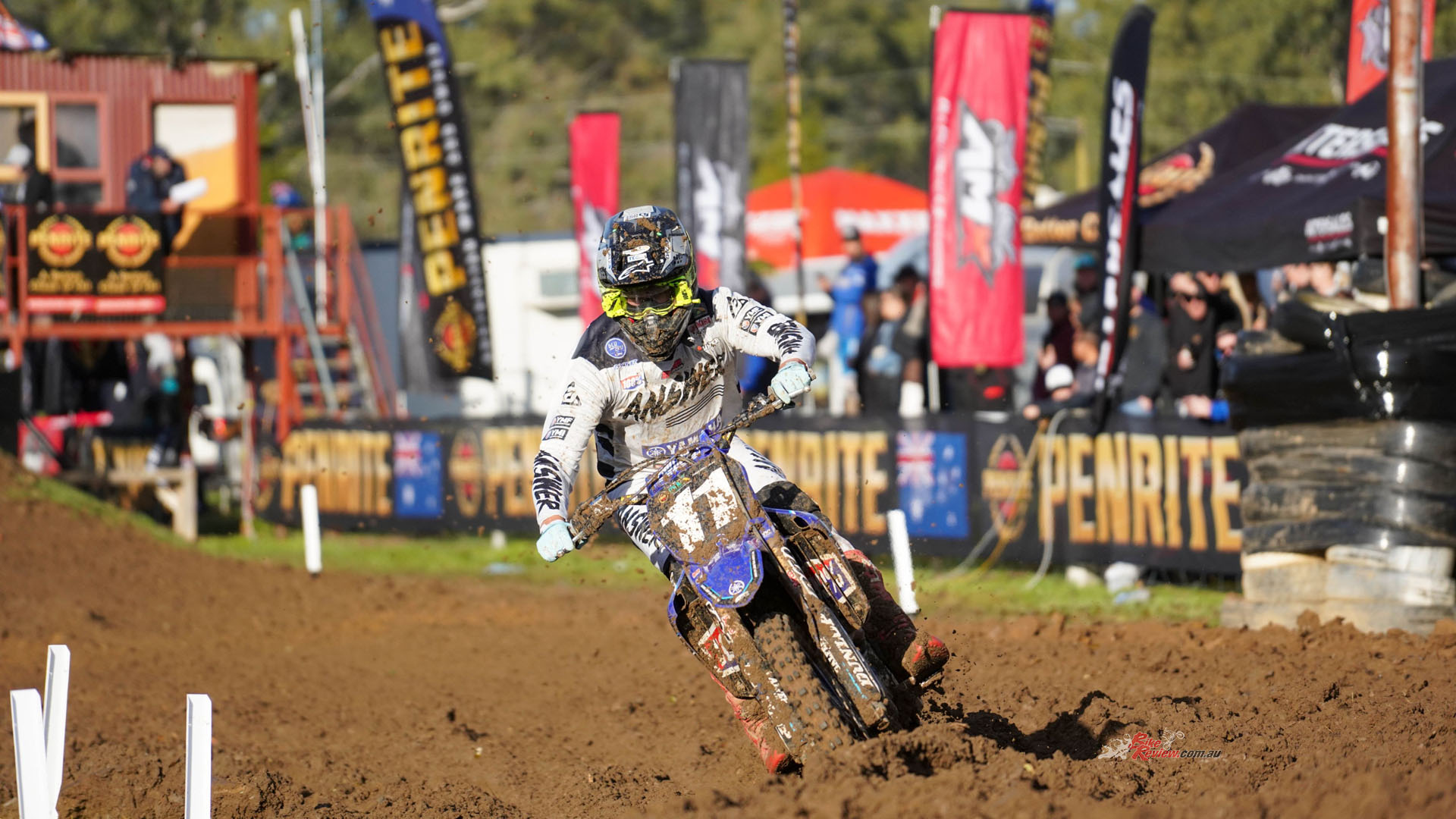 With 1-3 Moto scores, Malkiewicz would claim his first career Pirelli MX2 overall win, with Wilson Todd in 2nd and Ryder Kingsford in 3rd.

With 1-3 Moto scores, Malkiewicz would claim his first career Pirelli MX2 overall win, with Wilson Todd in 2nd and Ryder Kingsford in 3rd. In the Championship points, Wilson Todd maintains a healthy points lead as Red Plate holder ahead of Bailey Malkiewicz in 2nd and Alex Larwood in 3rd.

Maxxis MX3
In Maxxis MX3, youngster Cooper Holroyd took the holeshot on his Yamaha and would lead solid laps early in moto 1. At the half way point, KTM mounted Ryan Alexanderson would pass Holroyd for the lead, with HRC Honda Racing Australia’s Cambell Williams and Jack Mather in tow. 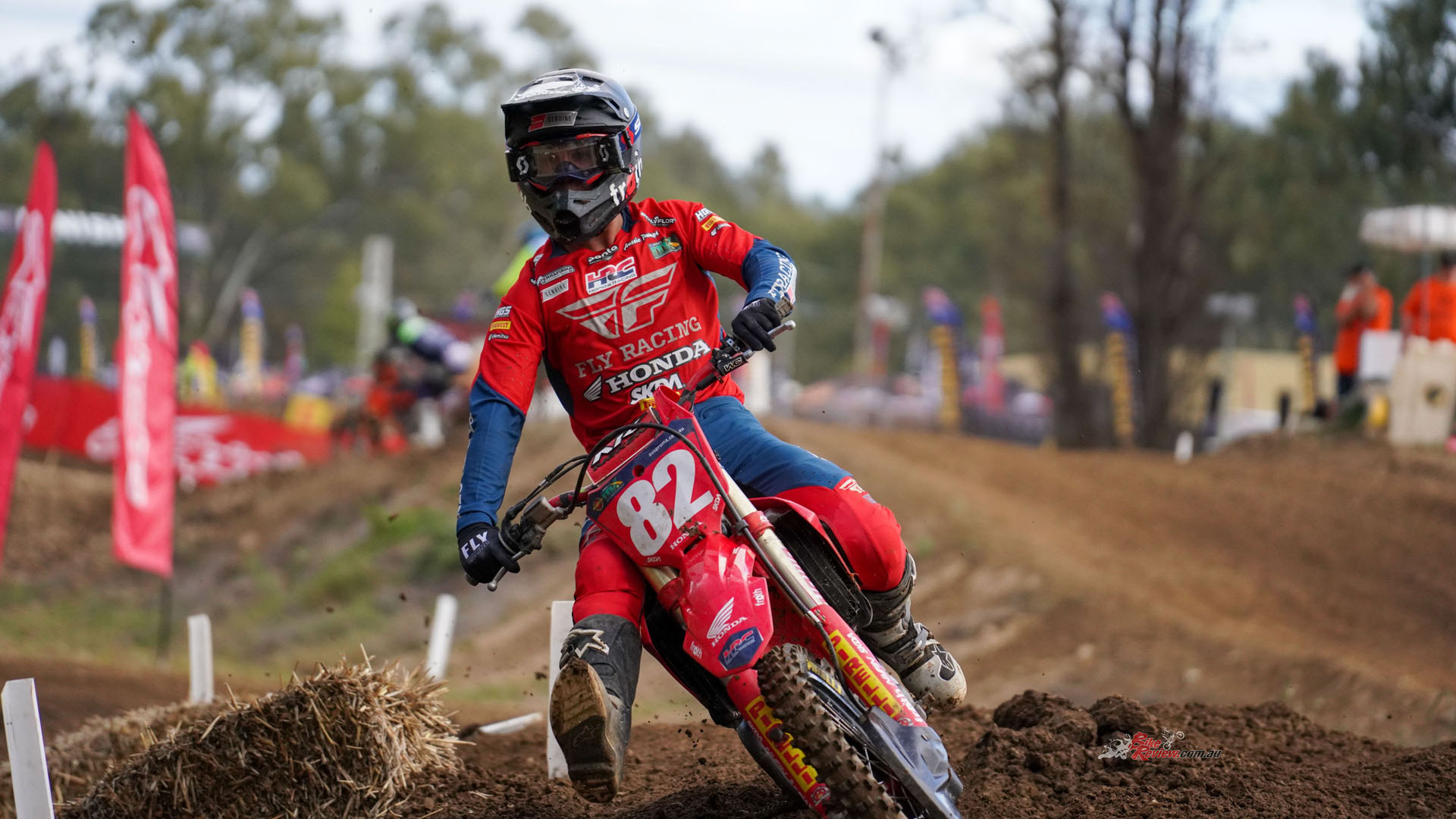 In the Championship, Williams extends his points lead with the Red plate, ahead of Alexanderson in 2nd and KTM Racing Australia’s Kayden Minear in 3rd.

At the chequered flag of Maxxis MX3 Moto 1, it was Ryan Alexanderson taking the Victory, ahead of Williams in 2nd and Mather in 3rd. Moto 2 would see KTM Newcastle mounted youngster Connor Towill holeshot and lead early.

At the halfway mark, Campbell Williams would mount his attack to take 1st position. Ryan Alexanderson mounted a huge charge from outside the top 5 to challenge Alexanderson down the stretch of the moto, culminating in a last lap battle for the top spot. At the finish, Williams would take the moto win ahead of Alexanderson in 2nd and Jack Mather in 3rd. 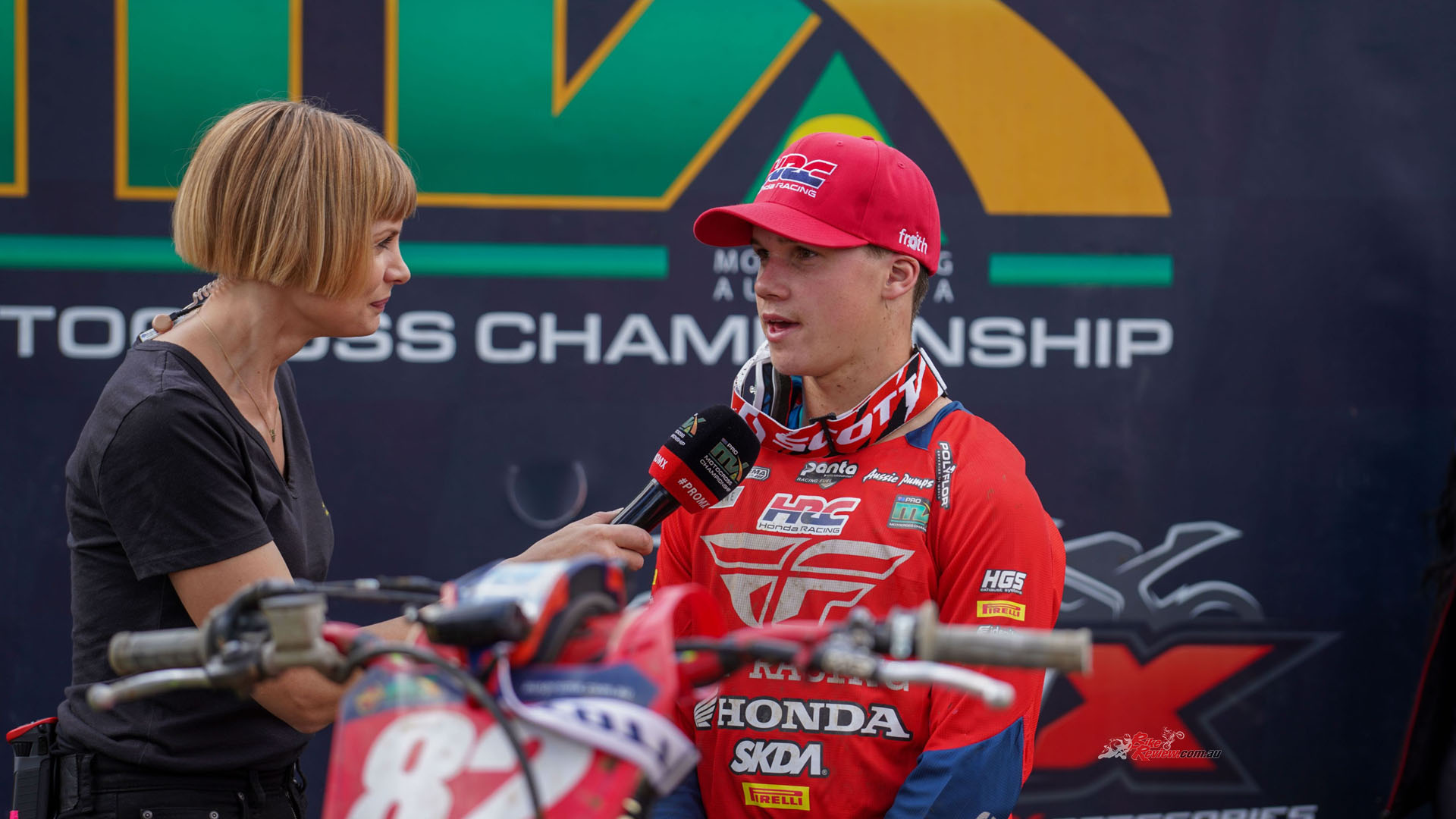 Riders now head to Gillman, SA on the 29th May for round four of the ProMX 2022 championship.

In the Championship, Williams extends his points lead with the Red plate, ahead of Alexanderson in 2nd and KTM Racing Australia’s Kayden Minear in 3rd.