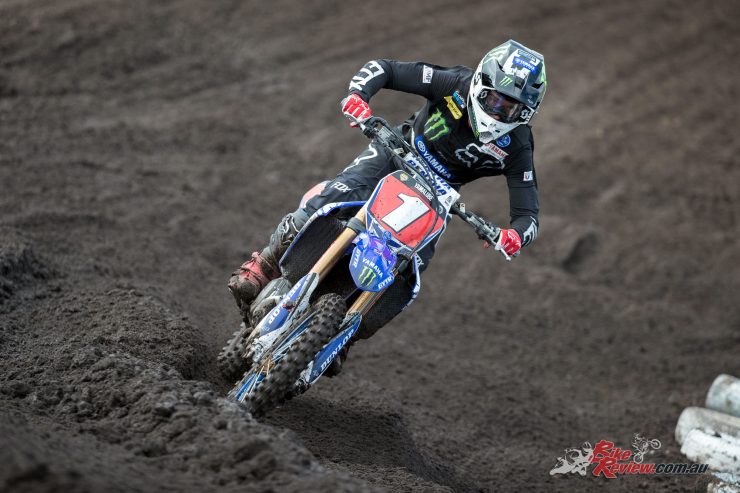 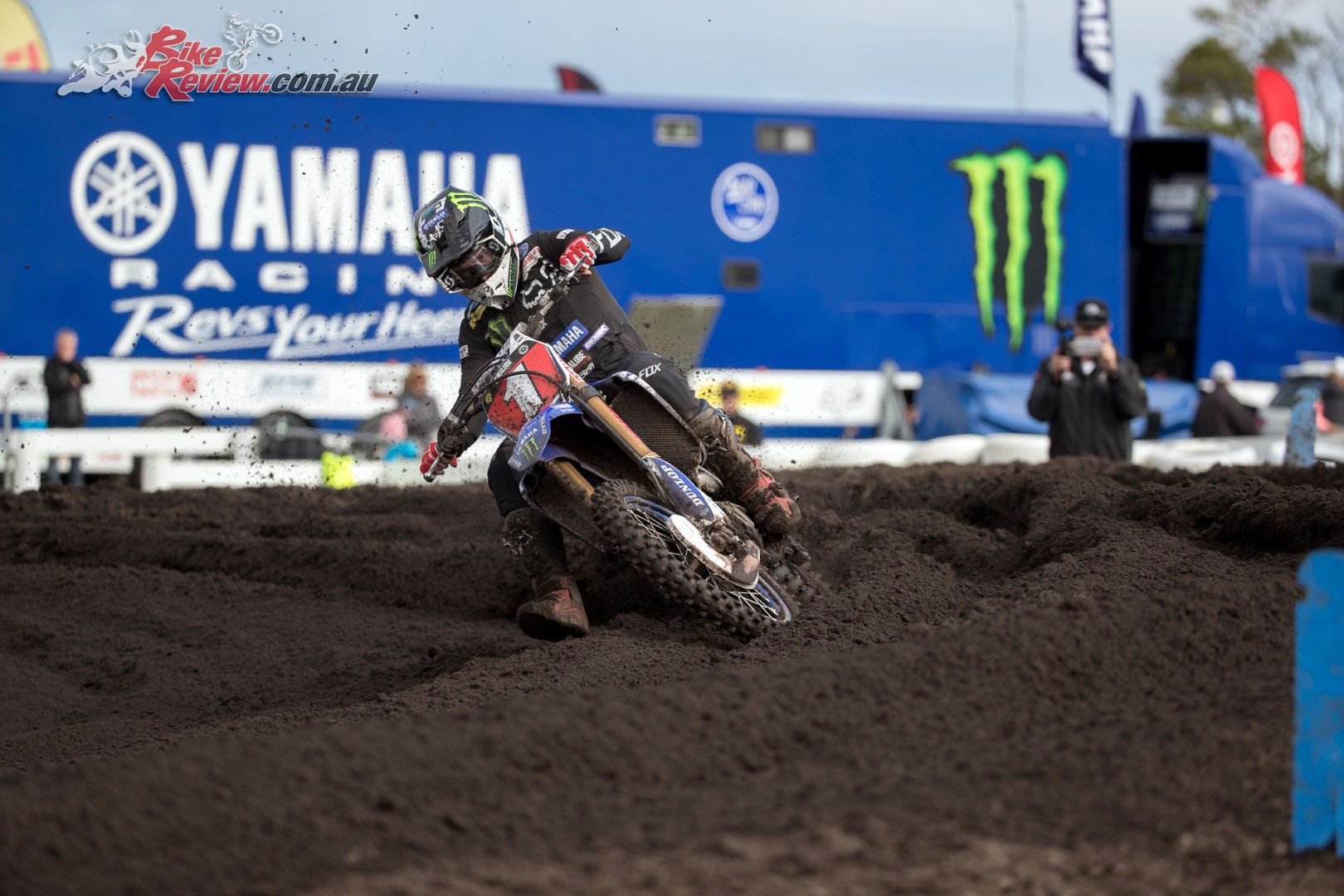 In the first of two rounds to be hosted this weekend, Ferris convincingly won both races, while Raceline Pirelli KTM rookie Mitch Evans finished an impressive second overall, ahead of KTM Motocross Racing Team’s Luke Clout.

In the opening race of the weekend Ferris leapt to the front and quickly showed the rest of the pack a clean pair of heels, extending his eventual victory lead to more than 35 seconds. Behind him, KTM Racing Team’s former MX Nationals champion Kirk Gibbs claimed second ahead of his teammate Clout, who scraped onto the podium after Penrite Honda Racing’s Brett Metcalfe experienced a mechanical problem on the final lap. Rhys Carter (Complete Parts Kawasaki Racing) finished fourth and Evans fifth. 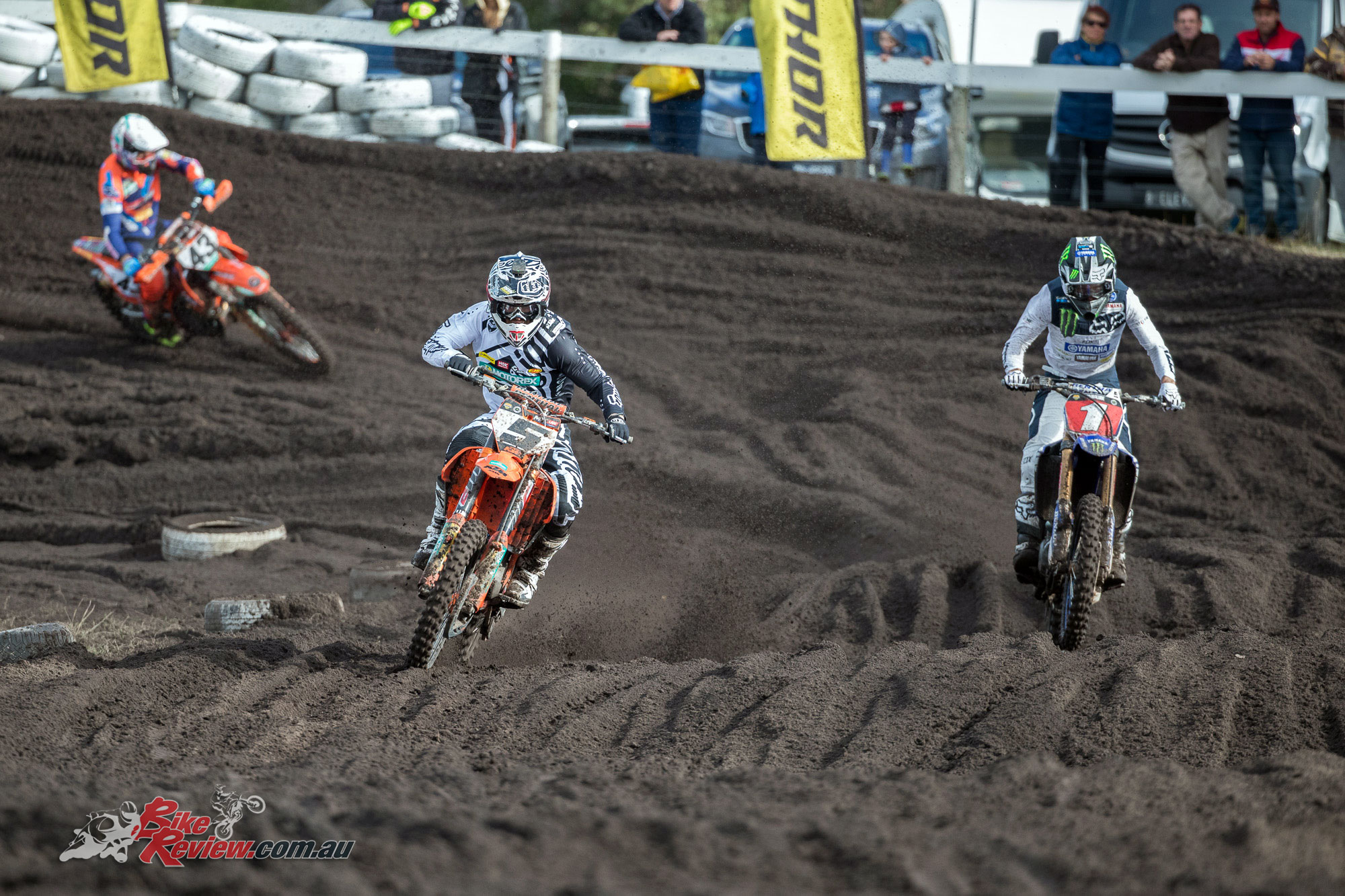 In the MX1’s second outing, Gibbs grabbed the hole-shot and pulled a small lead before crashing out of contention on the second lap. Gibbs’ misfortune granted Ferris the lead, which he held unchallenged to the chequered flag. Evans finished a remarkable second ahead of fellow rookie, Davey Motorsports Husqvarna’s Caleb Ward, while Clout and Metcalfe rounded out the top five. 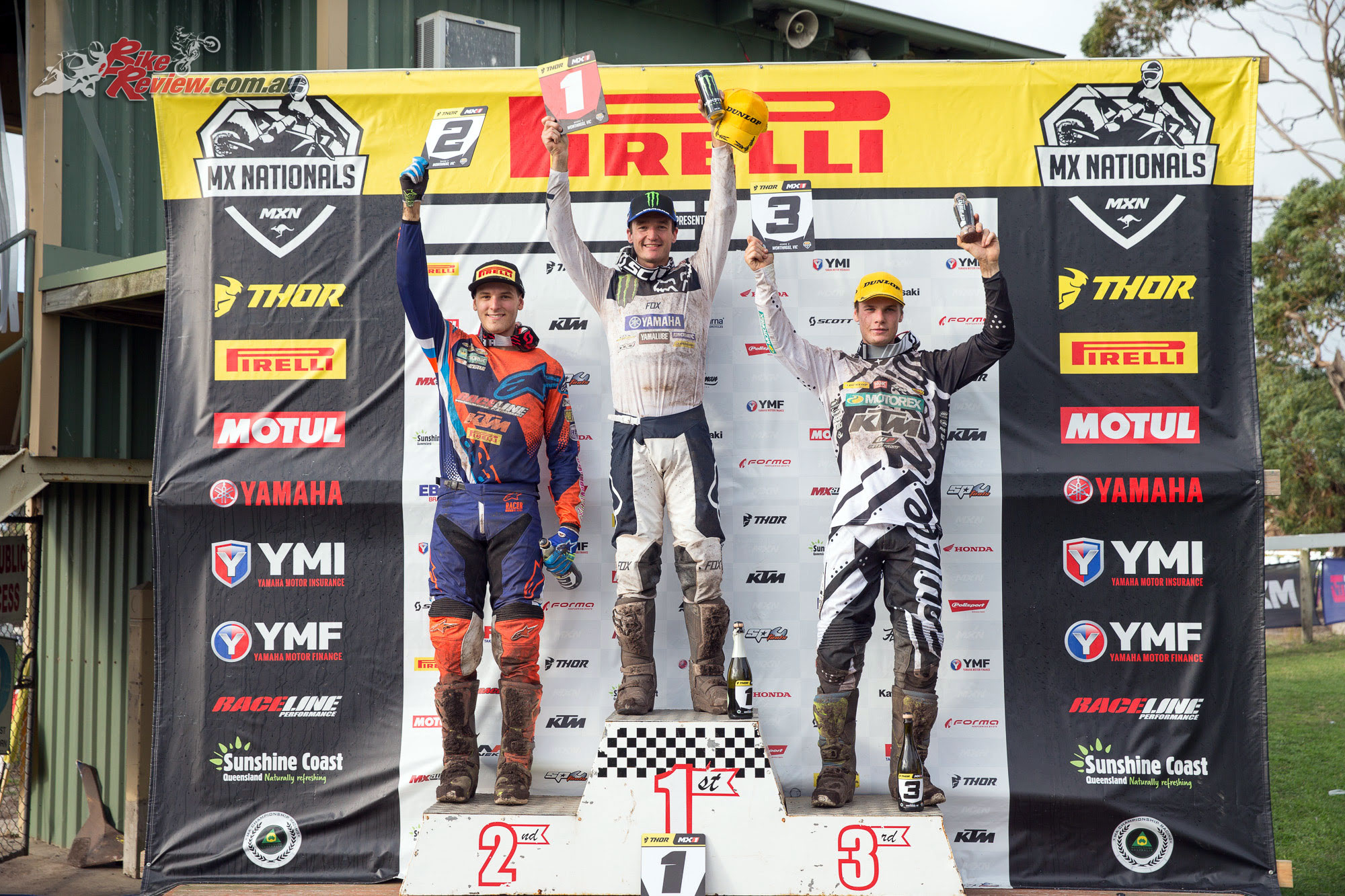 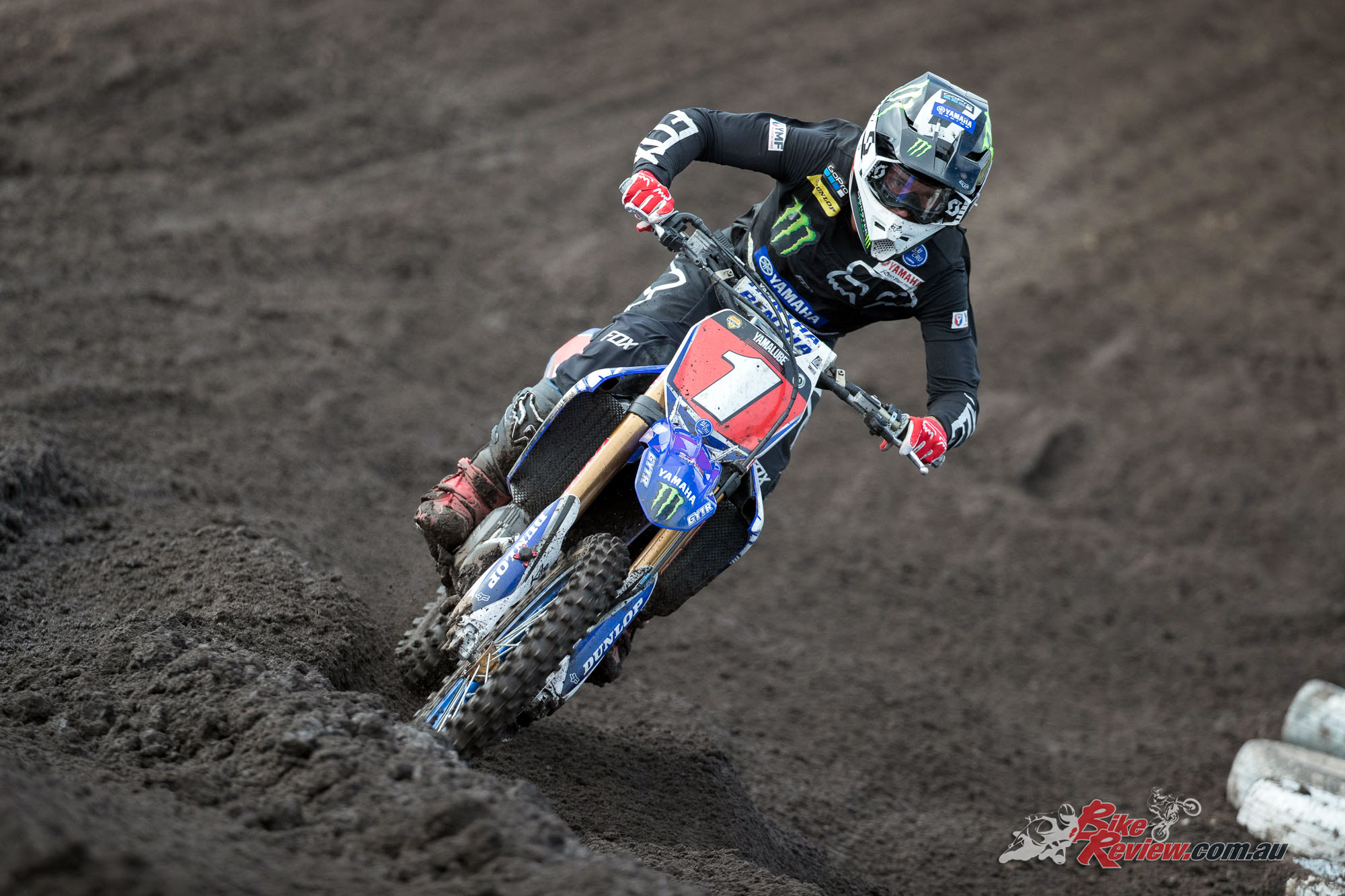 During the second day of back-to-back rounds, Ferris maintained his perfect win streak with a pair of first places, while Raceline Pirelli KTM rookie Mitch Evans continued to impress with another strong second overall, and hometown hero Kade Mosig (DPH Motorsports Husqvarna) claimed his first round podium of 2018.

The two-time defending champion Ferris claimed the Super Pole qualifying points, then quickly took command of the opening Thor MX1 race, lapping all the way up to 10th place before taking the victory with a 16-second lead. Behind him, Evans moved past KTM Motocross Racing Team’s Kirk Gibbs mid-way through the race as the pair of KTMs placed second and third. Mosig rode solidly to fourth place, while fellow Victorian Dylan Long (CDR Yamaha Monster Energy Team) rounded out the top five. 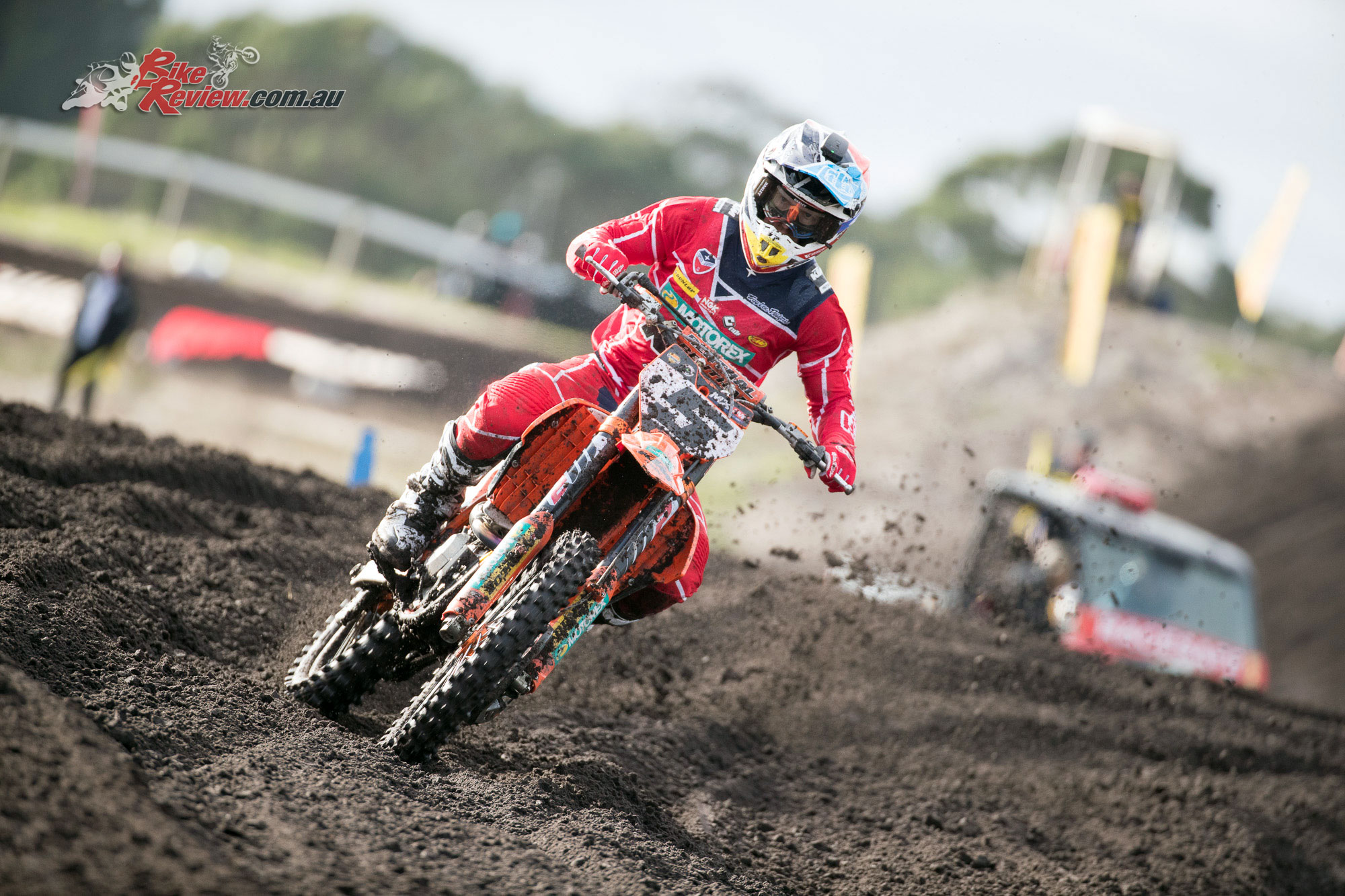 Evans scored the holeshot of the second Thor MX1 moto, with Ferris giving chase, waiting patiently before pulling the trigger and finishing 13 seconds ahead of the rookie. Mosig enjoyed a consistent race on his way to third, while Long and Gibbs placed fourth and fifth respectively. 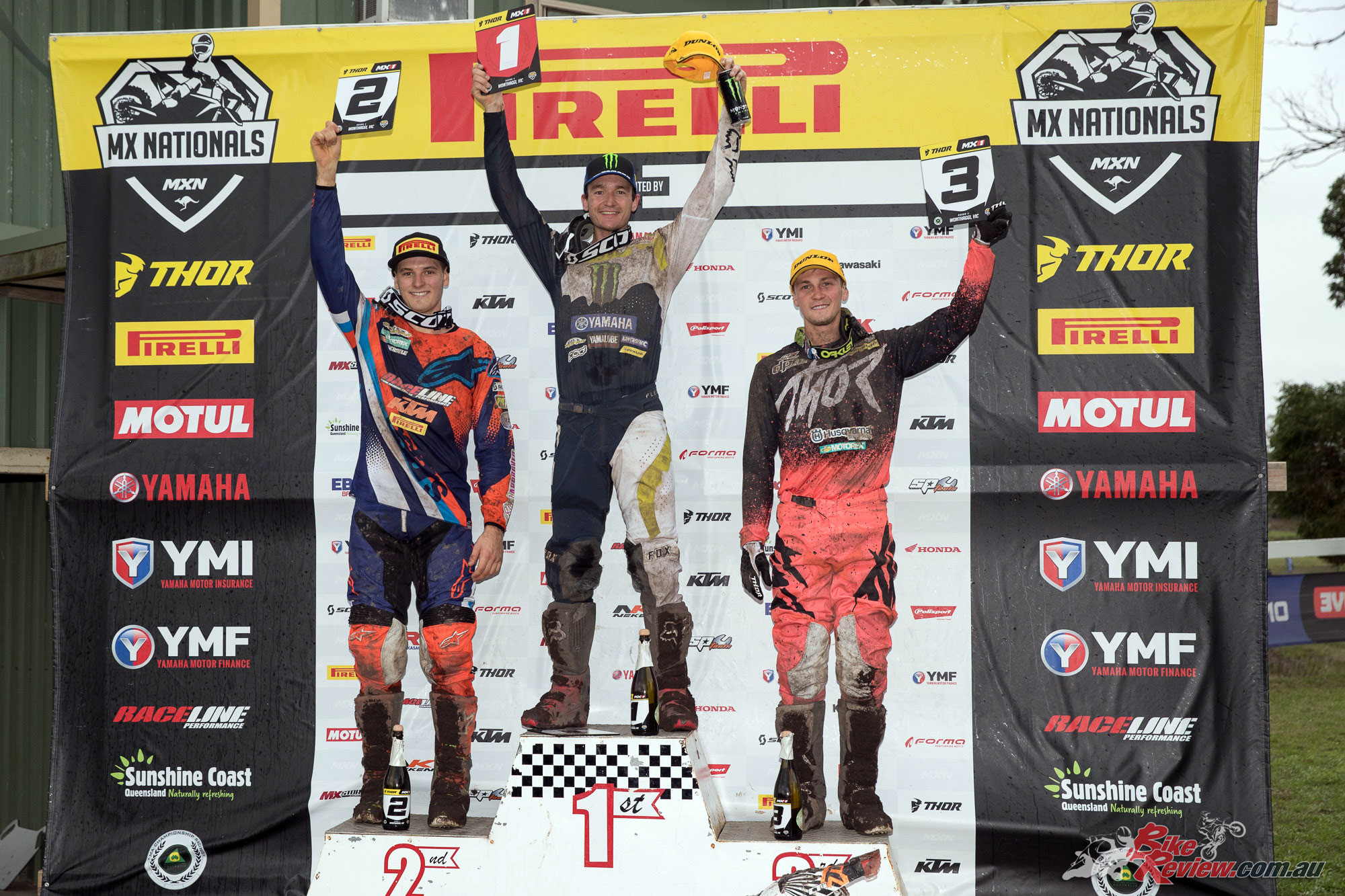 Webster secures first-ever Pirelli MX2 round win at Round 3

Webster won the opening race and backed it up with a third in the second outing to secure his maiden win. Serco Yamaha pairing Nathan Crawford and Wilson Todd filled the remaining positions on the podium with second and third overall respectively. 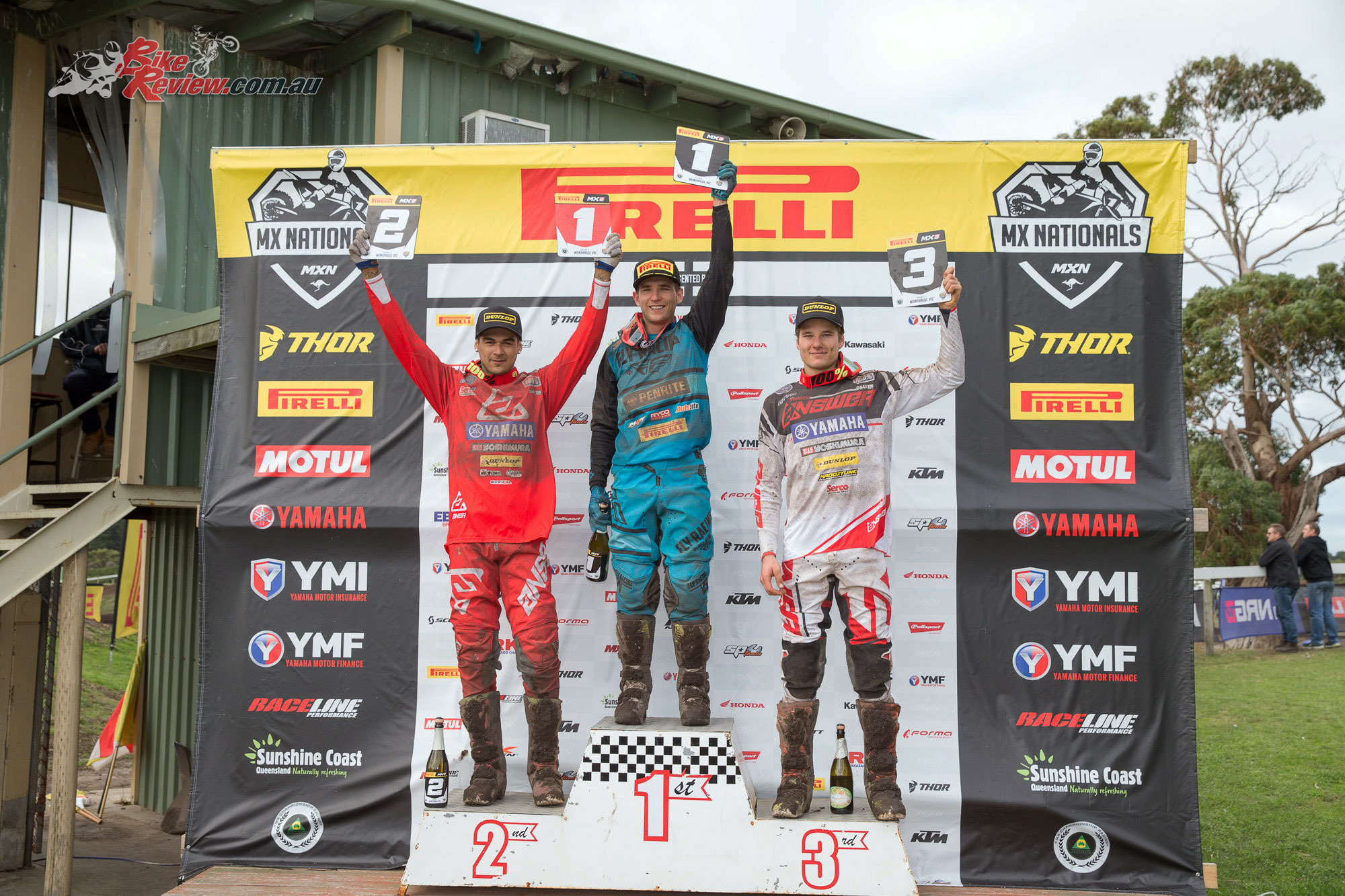 The Western Australian Webster started his day perfectly with a wire-to-wire 14-second victory in the opening moto, ahead of series leader Crawford, who fought through the pack after a mediocre start, and Jay Wilson (Yamalube Yamaha Racing). Penrite Pirelli CRF Honda Racing’s Jackson Richardson finished fourth after running as high as second, narrowly ahead of Davey Motorsport KTM’s Hamish Harwood in fifth.

Todd broke through for his first race win of the year in the second MX2 race, more than 17 seconds ahead of Crawford, who again had to push hard through the pack all race. Webster finished a hard-fought third after leading the race earlier. Wilson put in another solid ride to finish fourth, ahead of 2017 MX2 champion and early race leader Egan Mastin (KTM Motocross Racing Team).

A dream day in dreary conditions saw Serco Yamaha’s Wilson Todd not only chalk up a brace of race wins, but take control of the Pirelli MX2 championship points chase as well. 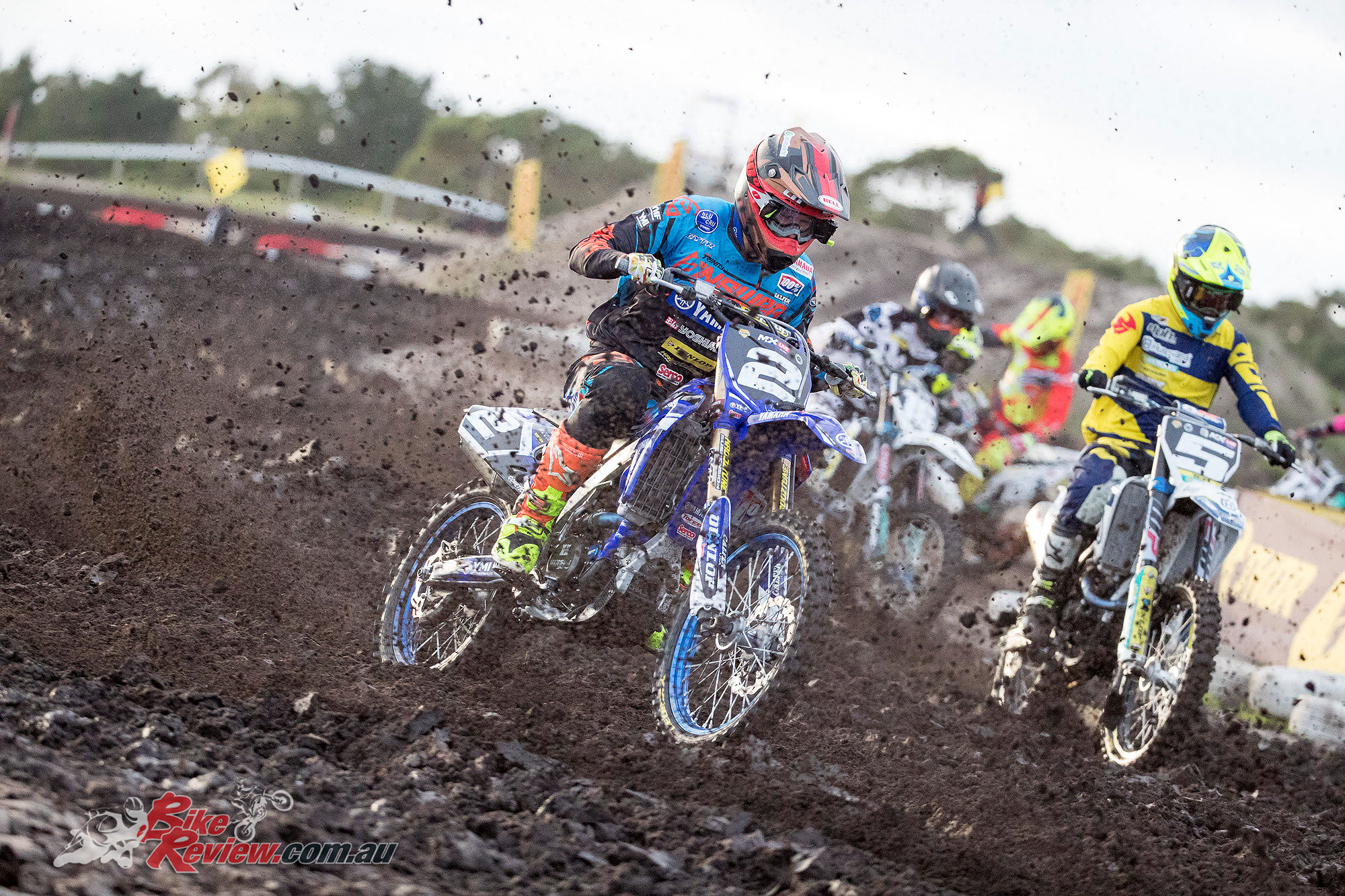 Todd made the most of a heavy track that threw up multiple surprises throughout the day, while defending MX2 champion Egan Mastin (KTM Motocross Racing Team) and New Zealand two-stroke racer Hamish Harwood (Davey Motorsports KTM) enjoyed their best days of the year as they completed the podium. Former red plate holder Nathan Crawford had a disastrous outing on his way to 16th overall, after failing to finish the second moto.

When the gate dropped on the Pirelli MX2’s first outing, Todd quickly set himself at the front of the pack and was never headed on his way to a five-second win, while MX Nationals Round 1 winner Aaron Tanti (Complete Parts Kawasaki) experienced a return to form with a well-earned second place. Harwood fought through the pack on his way to third, with Mastin fourth and Jay Wilson (Yamalube Yamaha Racing) fifth. 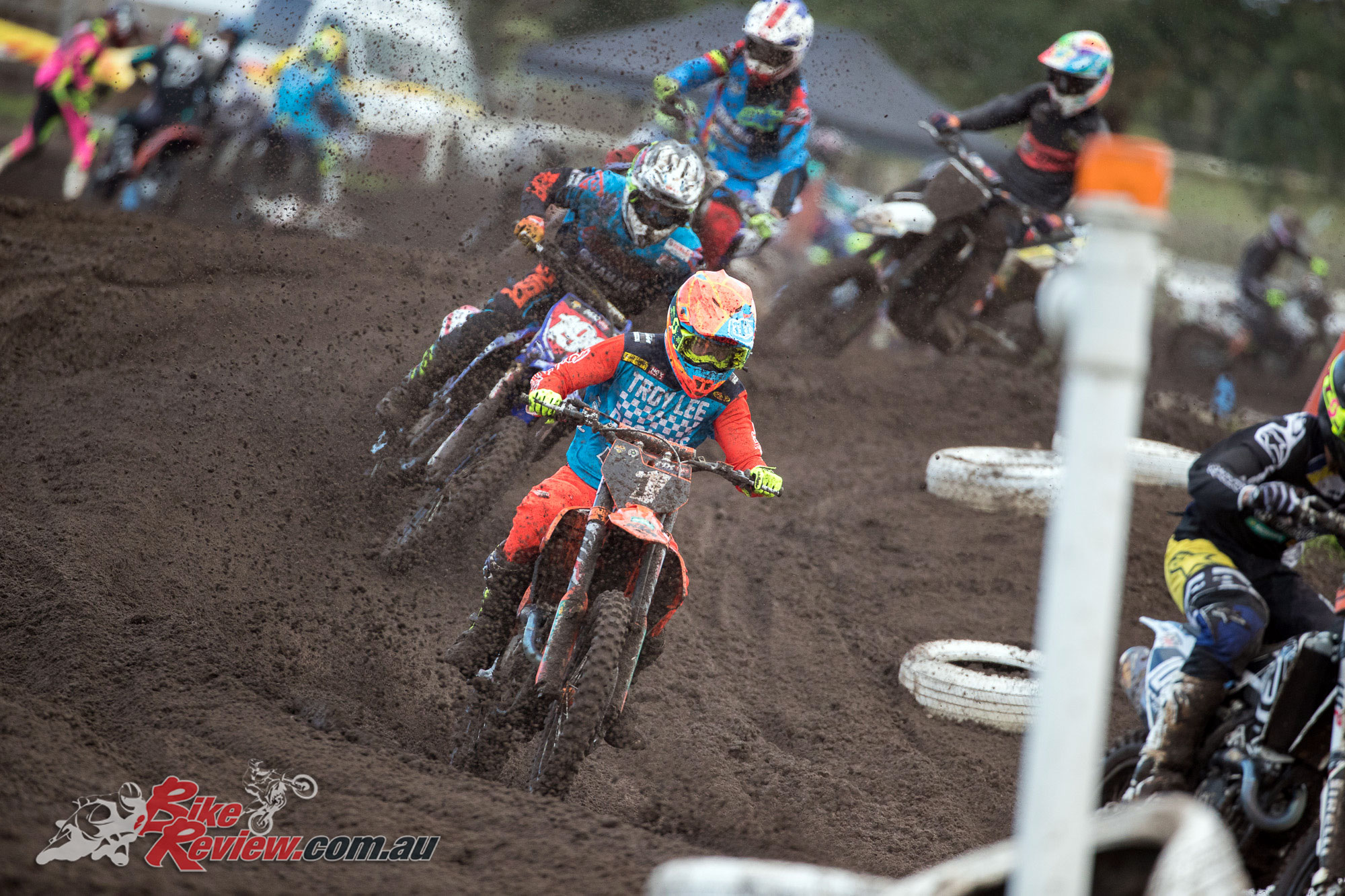 When the MX2 pack hit the track again, Todd again snatched the holeshot and tore out to a commanding 18-second lead over his 2017 rival Egan Mastin, who scored his posted result so far this year. Filling the top three was privateer Jy Roberts (Husqvarna), with a break-out performance. Harwood rode a solid race on his way to fourth, with Tanti fifth. 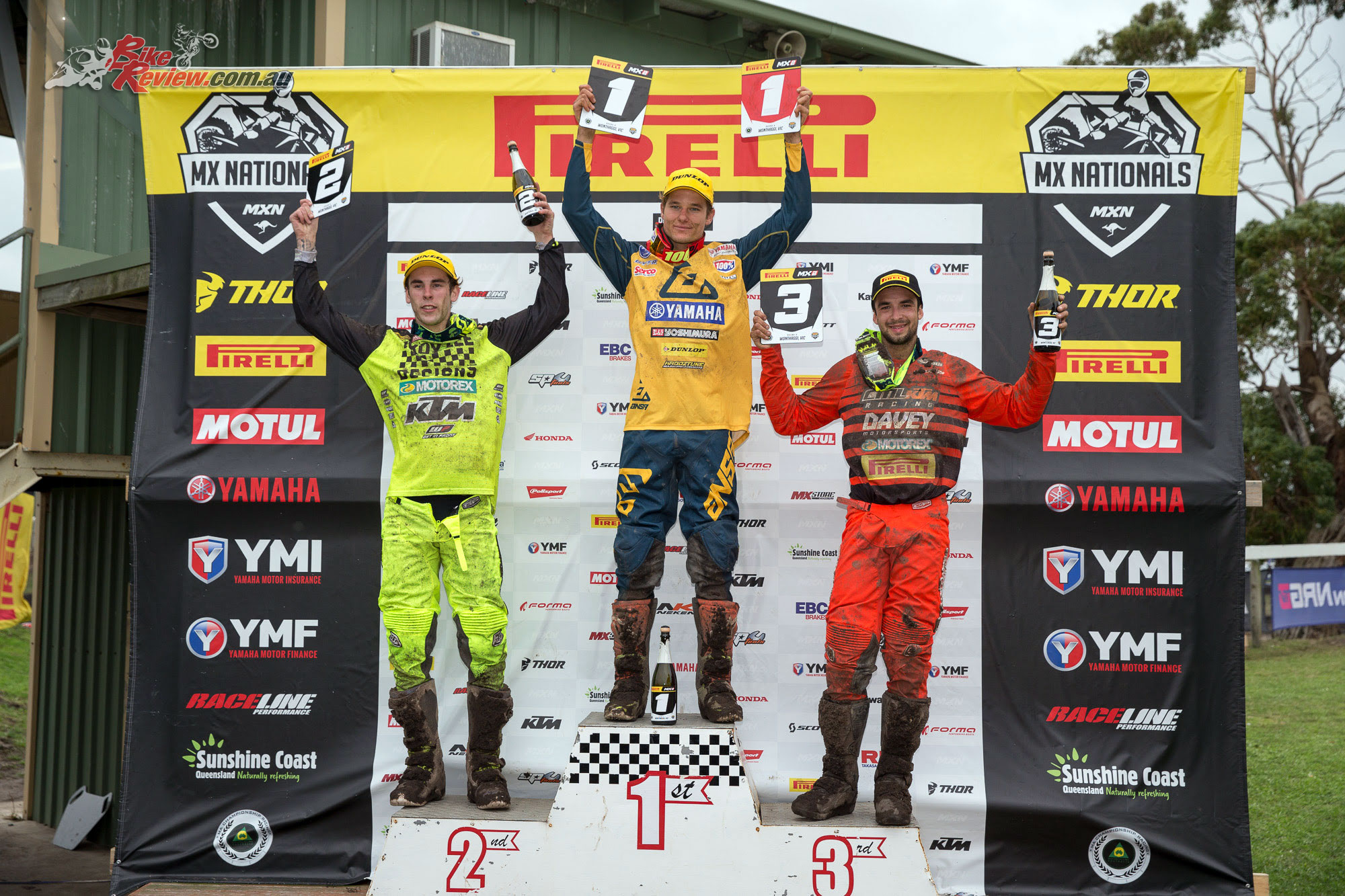 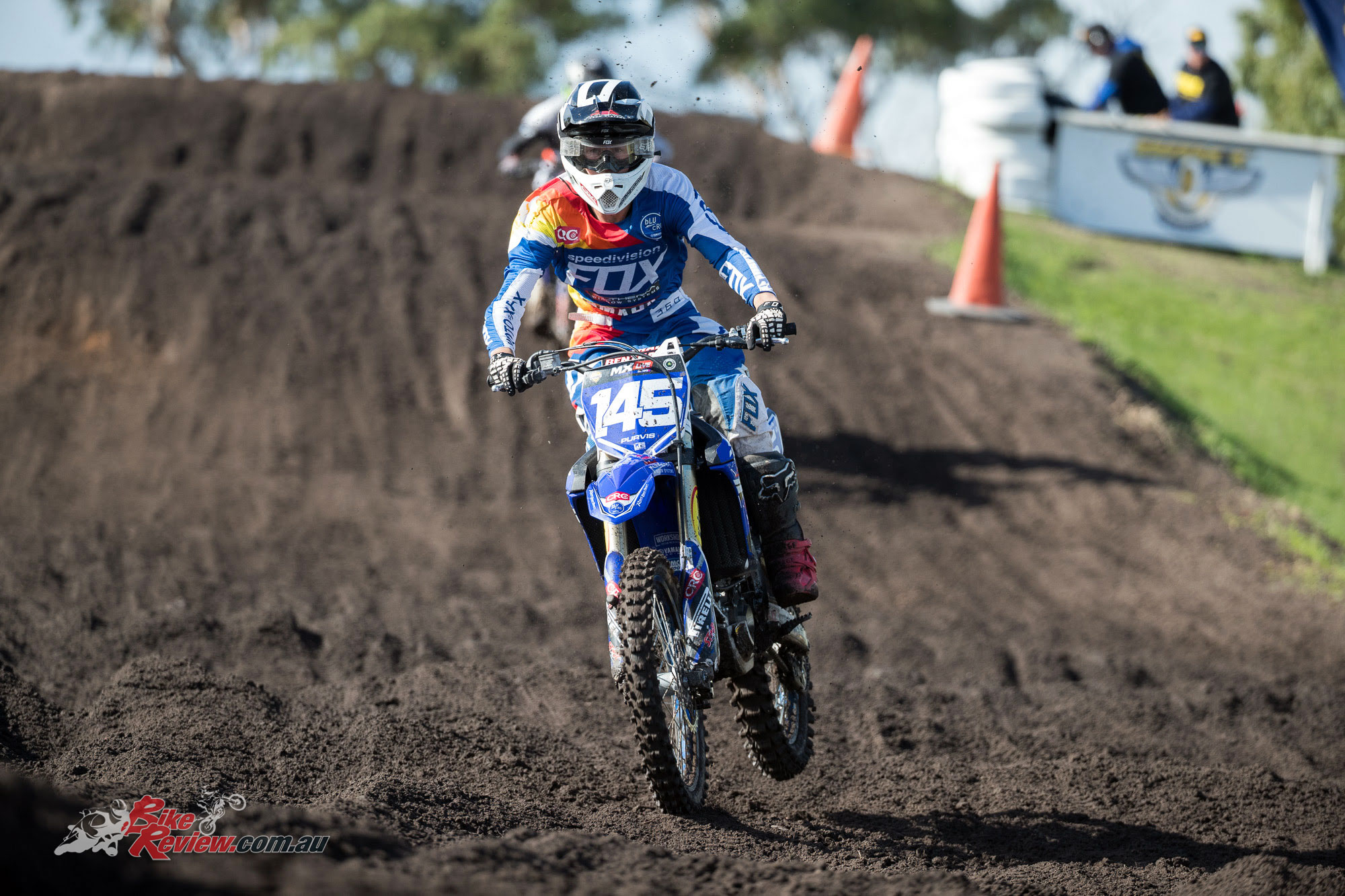 Purvis won the day on count-back from Malkiewicz, while Davey Motorsports KTM’s Morgan Fogarty rounded out the podium.

Malkiewicz took the race honours in the opening MXD race, with Purvis shadowing him across the line just two seconds behind. The pair were in a league of their own all race, with third-placed Jye Dickson (Raceline Performance KTM) finishing 53 seconds adrift, while Callum Norton (Penrite Honda Racing) and Mat Fabry (Bee Firm NRG Yamaha) placed fourth and fifth respectively.

Purvis took the bit between his teeth in the second moto and pulled out a 10-second victory over Malkiewicz, while Fogarty, Hugh Mackay (Bulk Nutrients WBR Yamaha) and Norton rounded out the top five. 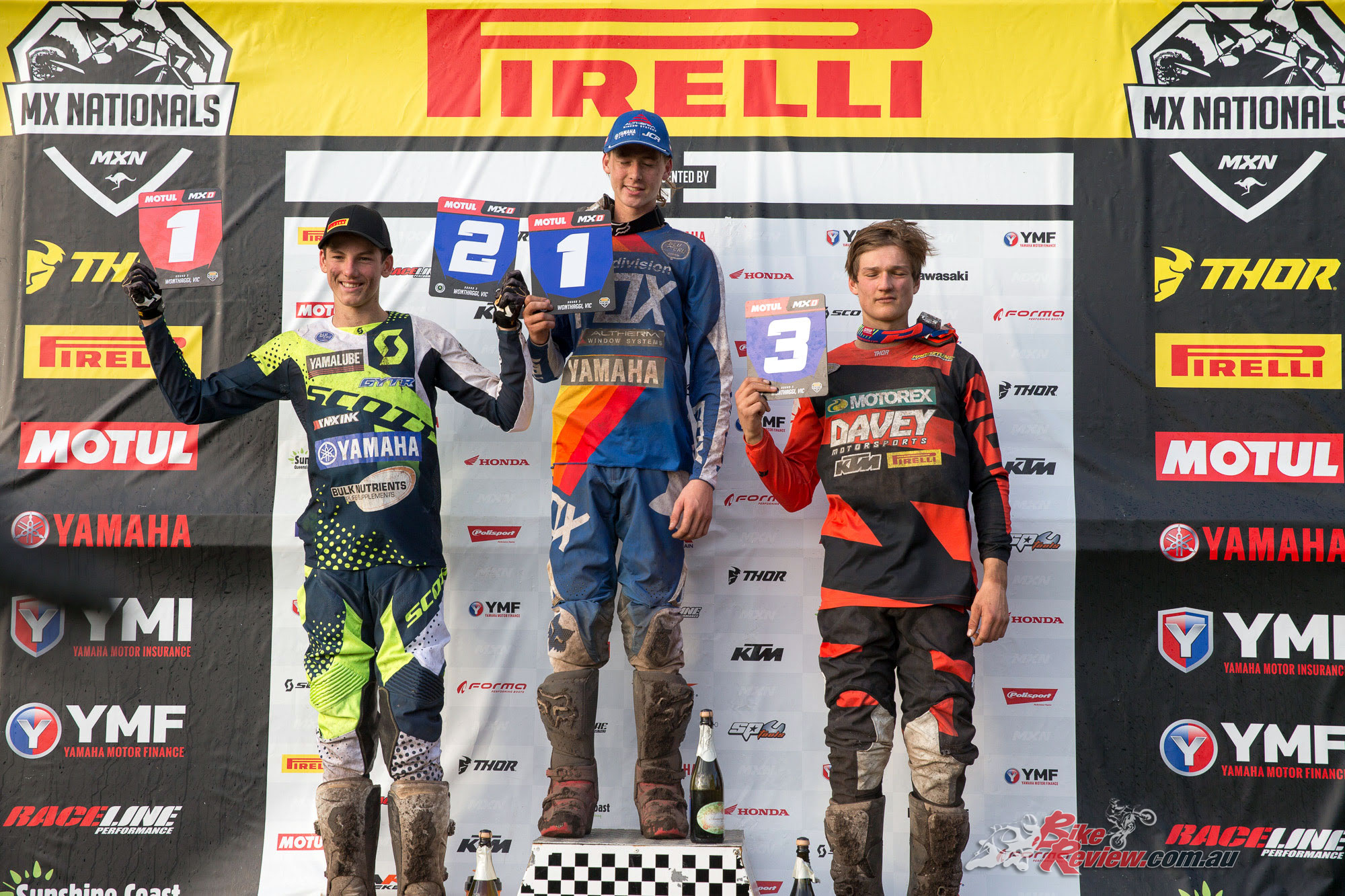 Similar to Round 3 on Saturday, both Purvis and Malkiewicz traded race wins in the two MXD outings, while Davey Motorsports KTM’s Morgan Fogarty again rounded out the podium.

In deteriorating weather and track conditions, Purvis took control of the final Motul MXD race to register his second race and round win in as many days, seven seconds ahead of Malkiewicz. Penrite Honda’s Callum Norton finished the moto in third, chased by Fogarty in fourth and KTM racer Mason Rowe in fifth. 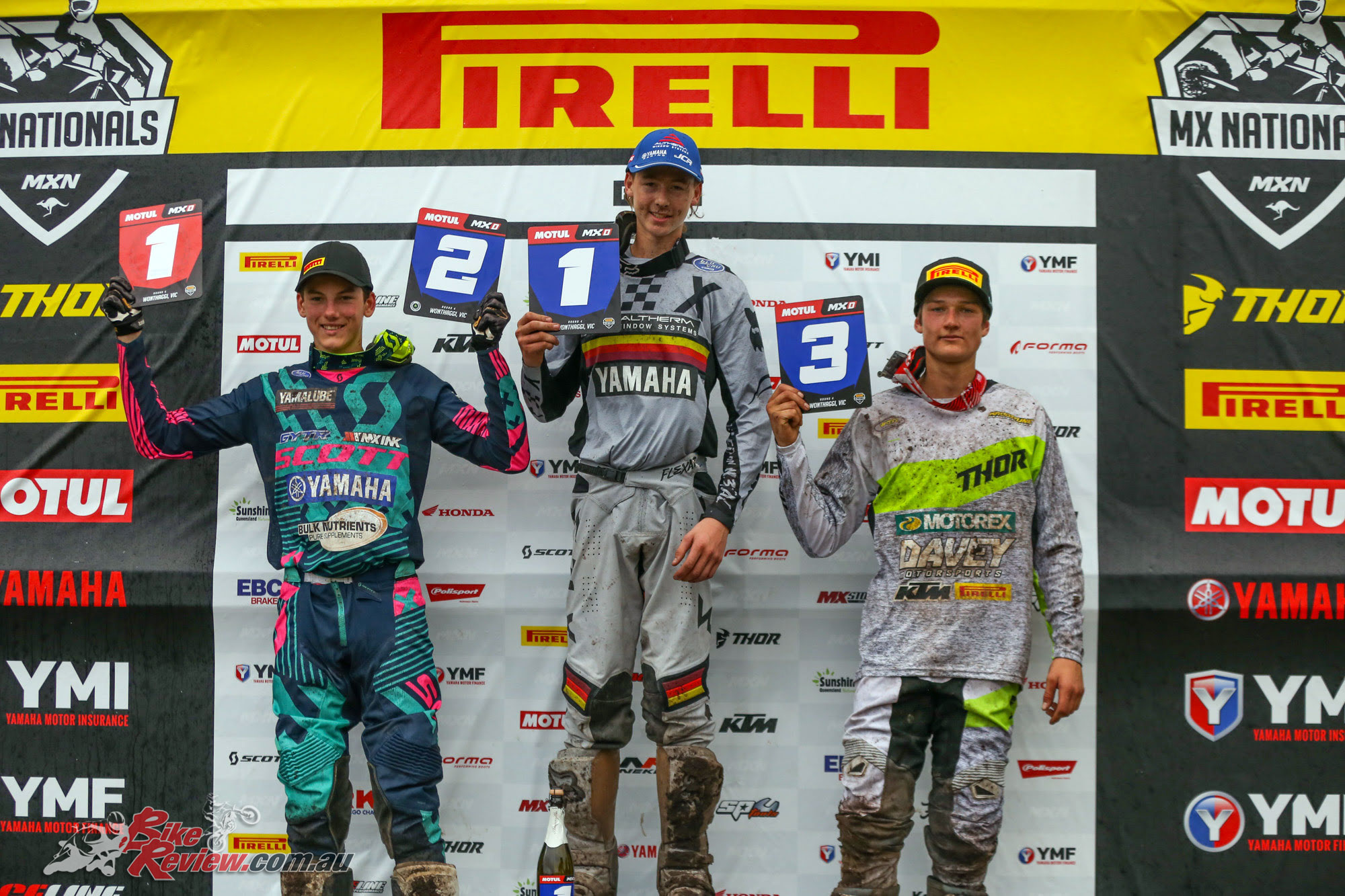 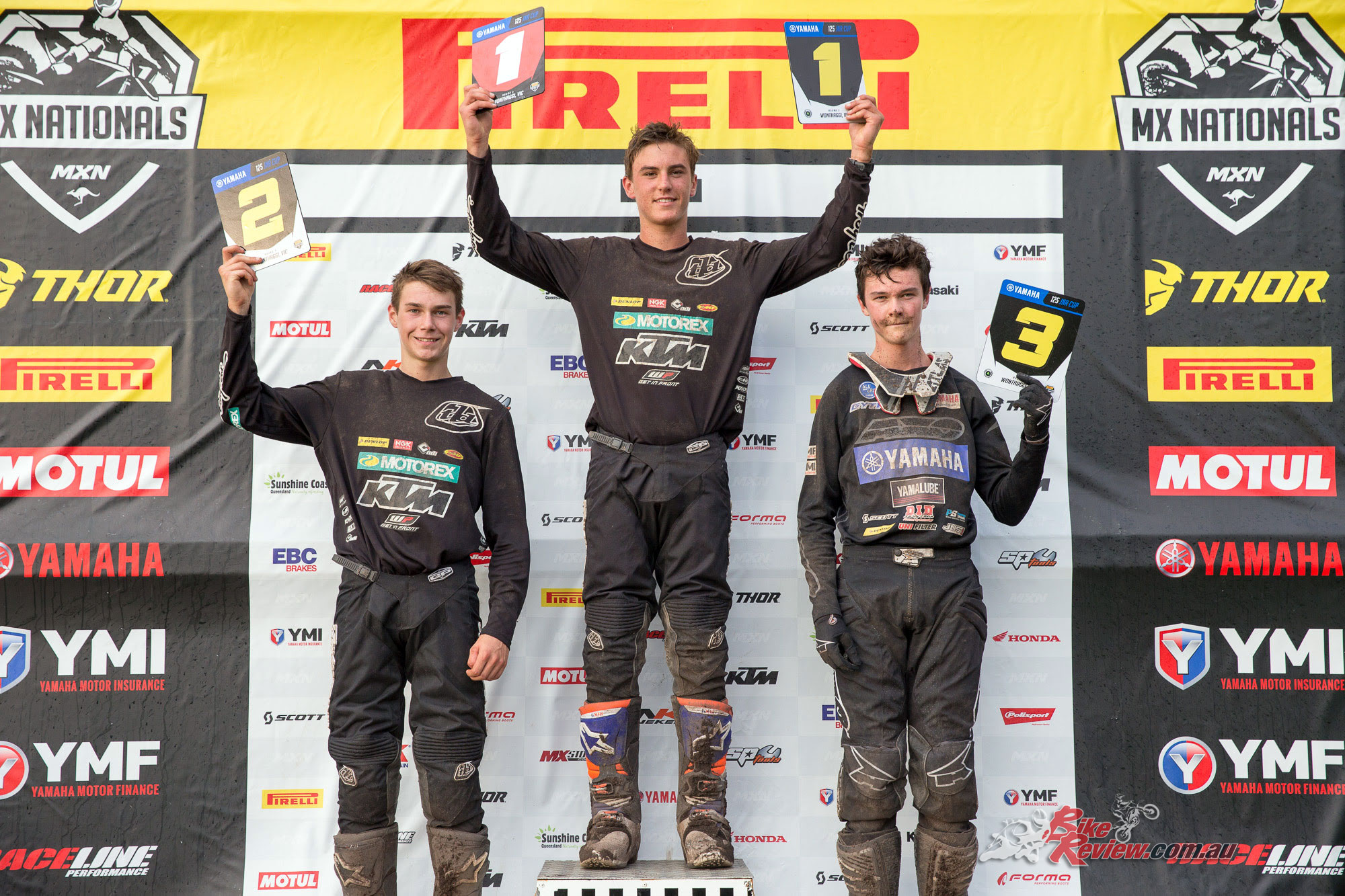 Right from the outset Duffy proved he was going to be the one to beat, qualifying a massive seven seconds quicker than anyone. He brought that same pace into both races, stretching out leads of 32 seconds and 29 seconds in his two outings to easily take the day’s overall.

In the first Yamaha 125cc Juniors moto behind Duffy at the head of the pack, Andrews got the better of KTM’s Noah Ferguson, with Fox and Jai Walker (Husqvarna) rounding out the top five.

The 2018 Pirelli MX Nationals will continue at Murray Bridge, South Australia on Sunday, 27 May before the series heads into its mid-season break.