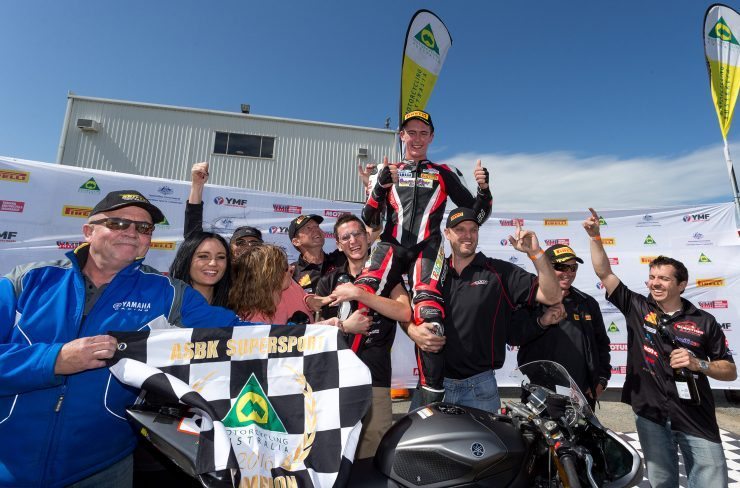 Graffiti Alley Racing’s Troy Guenther has narrowly clinched the 2016 Motul Supersport Championship, with the title coming down to an epic last lap of the final race, at the deciding round of the Yamaha Motor Finance Australian Superbike Championship presented by Motul Pirelli at Winton Motor Raceway.

In what were close to perfect track conditions, the Motul Supersport competitors chased down the 2016 title across two races, keeping the crowds guessing as to who would be crowned champ from the minute bikes hit the track.

With Cube Racing’s Callum Spriggs qualifying fastest in qualifying and starting from pole position, Championship points leader Sam Clarke (Banham’s WA Racing) had his work cut out for him in race one after starting from the second row.

And when racing got underway, from the minute bikes headed in to the first turn there was drama on track, with Mark Chiodo, Oliver Cambridge, and Rhys Belling all going down which then forced the race to be red flagged.

When bikes returned to the grid, the first Motul Supersport race was reduced to 13 laps, and Clarke was provided yet another opportunity to wrap up the 2016 championship. But it was pole position setter Spriggs who got the jump off the start and moved in to the early race lead ahead of JNL Racing’s Luke Mitchell and Troy Guenther.

From there, the top three riders separated separated themselves from the field, leaving Clarke and Cube Racing’s Robbie Menzies to go at it in fourth and fifth positions.

With eight laps to go, Spriggs increased his lead to more than two seconds, keeping a healthy distance between himself and second placed Guenther who had just made the pass on Yamaha’s Mitchell.

But it was Clarke’s form in fourth position which continued to capture the crowd’s attention – the Kawasaki rider keeping a number of riders such as Chiodo, Nic Liminton, and Menzies at bay, who had all had a chance to ride in fifth position.

But the excitement didn’t stop there, as riders headed in to the closing stages of the race, Guenther closed in on Spriggs’ rear wheel, and made the move for the lead as the pair headed in to turn one. Unfortunately for Spriggs, Mitchell also made the pass on the Kawasaki rider relegating him to third. 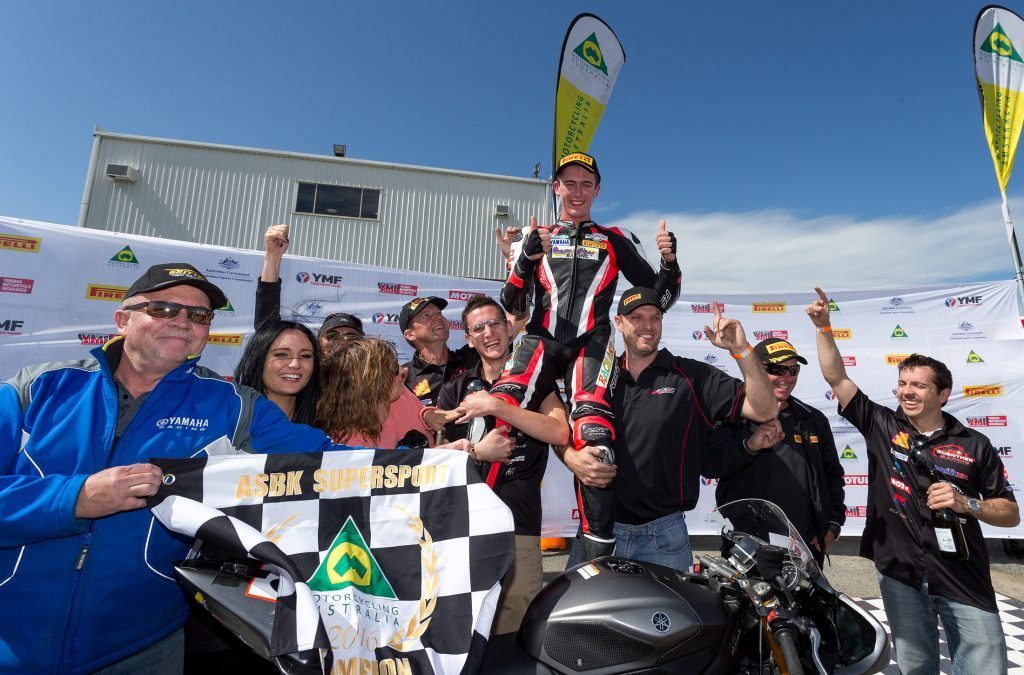 And when the chequered flag flew, Guenther collected his first race win for the weekend, followed by Mitchell in second, while Spriggs who led for the majority of the race crossed the line in third.

Race Centre’s Liminton finished in fourth place ahead of Clarke who wrapped up race one for the Motul Supersport competitors in fifth. Unfortunately, with a fifth in race one, Clarke handed the championship lead over to Guenther by a single point, ensuring the second race this afternoon was nothing short of a nail biter.

With only one point separating points leader Guenther from Clarke at the beginning of race two, one thing was certain, and that was the final Supersport outing was going to be one serious show stopper.

After two laps on track, Spriggs once again showed that he was in fine form this weekend, launching off in to the race lead 2.120 seconds ahead of Clarke who also got to a fantastic start.

But unfortunately for Clarke, Mitchell was another rider showing impressive speed this weekend, and as riders headed into turn one on lap four, the Yamaha rider relegated Clarke to third position, just ahead of closest rival Guenther.

From there, Guenther capitalised on the opportunity to make what could be a championship deciding pass happen, slotting up to the final podium position behind Alderson and Mitchell.

With only six laps remaining, Guenther showed that he means business, and to put more distance between himself and Clarke, he made the pass on Mitchell for second, putting immense pressure on the Western Australian championship hopeful Clarke in fourth position. But just as quickly as Guenther had gotten by Mitchell, Clarke retaliated and also passed Mitchell to move in to third position, setting up the final laps as the ultimate dash to the finish line.

When the last lap board was shown, Clarke knew he only had a single rotation to make something happen, but it all turned pear shaped in turn 11 for the Kawasaki rider, crashing with the finish line in his sights.

Despite getting to his feet and resuming, the last race win was taken by Cube Racing’s Callum Spriggs, while Guenther crossed the line in second position ahead of Mitchell in third. Ted Collins, and Liminton completed the top five.

But it was a fairytale ending for Guenther in race two – second place being just enough to secure him the 2016 Motul Supersport Championship by eight points. Despite crashing in the final race and finishing in eighth, Clarke held on to finish as the 2016 runner up, while Yamaha’s Mitchell completed the Supersport podium.

“Coming in to this weekend eight points down we knew had a bit of a task, but the Graffiti Alley Racing Yamaha Team worked really hard through testing and throughout this weekend, and provided me with a championship winning bike, which I can’t thank them enough for.

“I am not going to lie, in that last race I felt a bit of pressure seeing point five and then point two on my pit board. I just kept thinking in my head take it lap by lap and a big hats off to Sam he put in a great fight.

“It was a really, really fun race and definitely wasn’t an easy championship win,”

For a complete list of results from today, head to www.computime.com.au