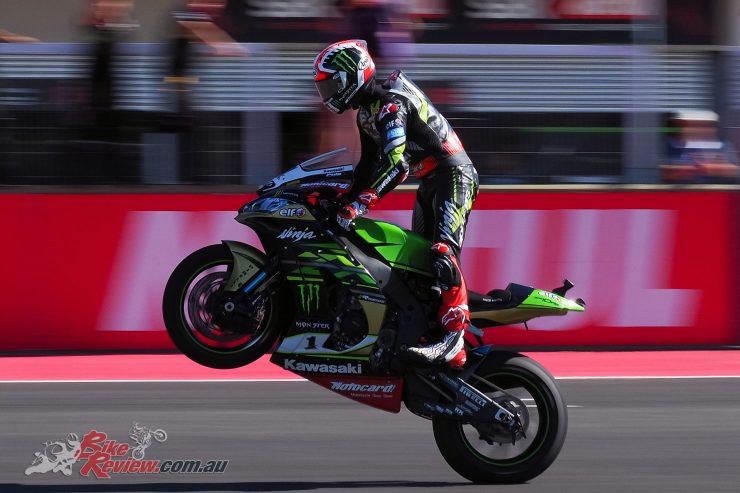 Jonathan Rea has proven unbeatable at the new Argentinian WorlSBK round, held at the Circuito San Juan Villicum, with the new location proving a great success, as Jules Cluzel also took the World Supersport win. 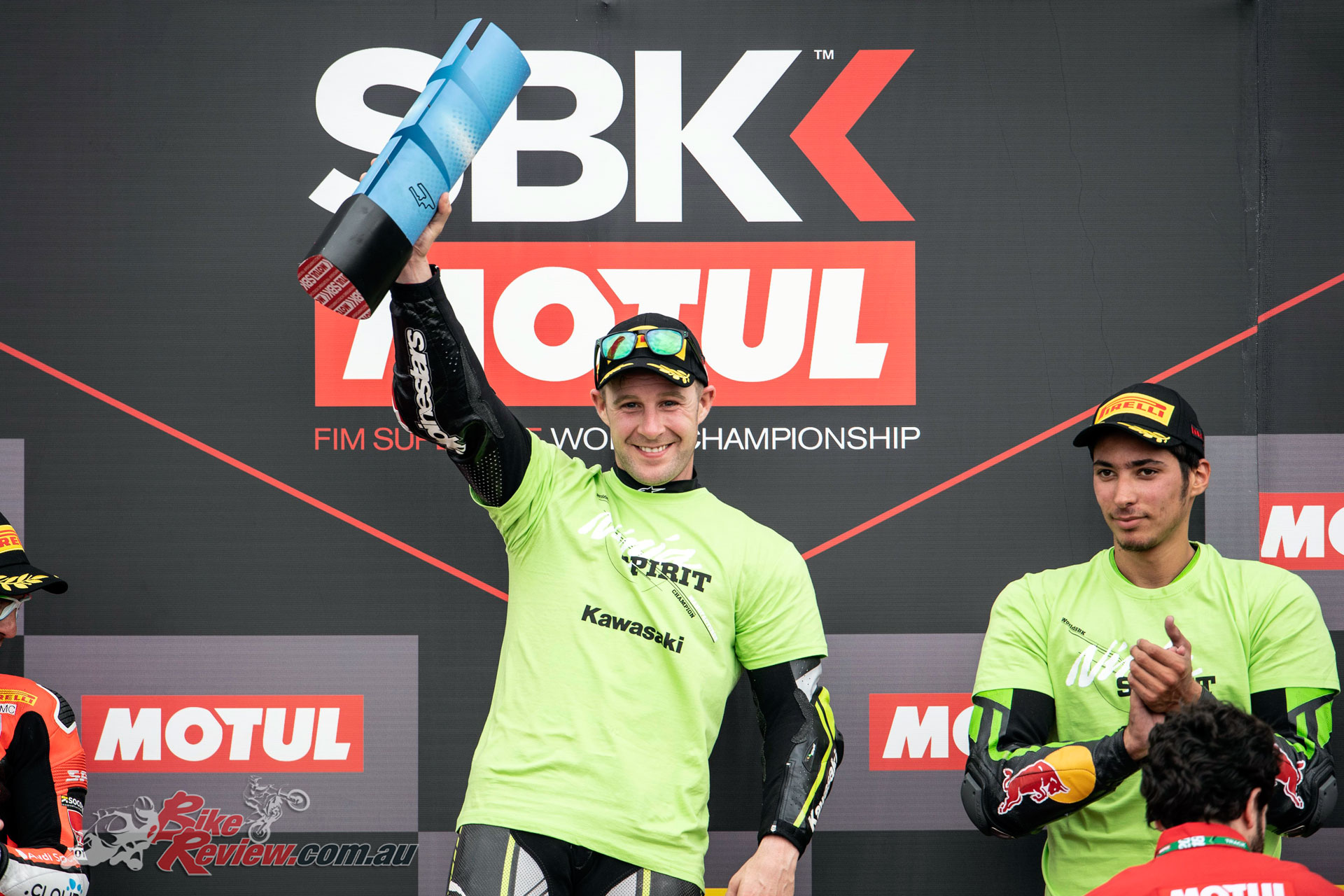 Jonathan Rea (Kawasaki Racing Team WorldSBK) has made history once again at the Argentine’s Circuito San Juan Villicum, winning the first ever race of the MOTUL FIM Superbike World Championship on South American soil in authoritative fashion. Marco Melandri (Aruba.it Racing – Ducati) and a scintillating Toprak Razgatlioglu (Kawasaki Puccetti Racing) completed the race one podium. With Rea’s win, Kawasaki have now officially won the manufacturers title for the fourth year in a row. 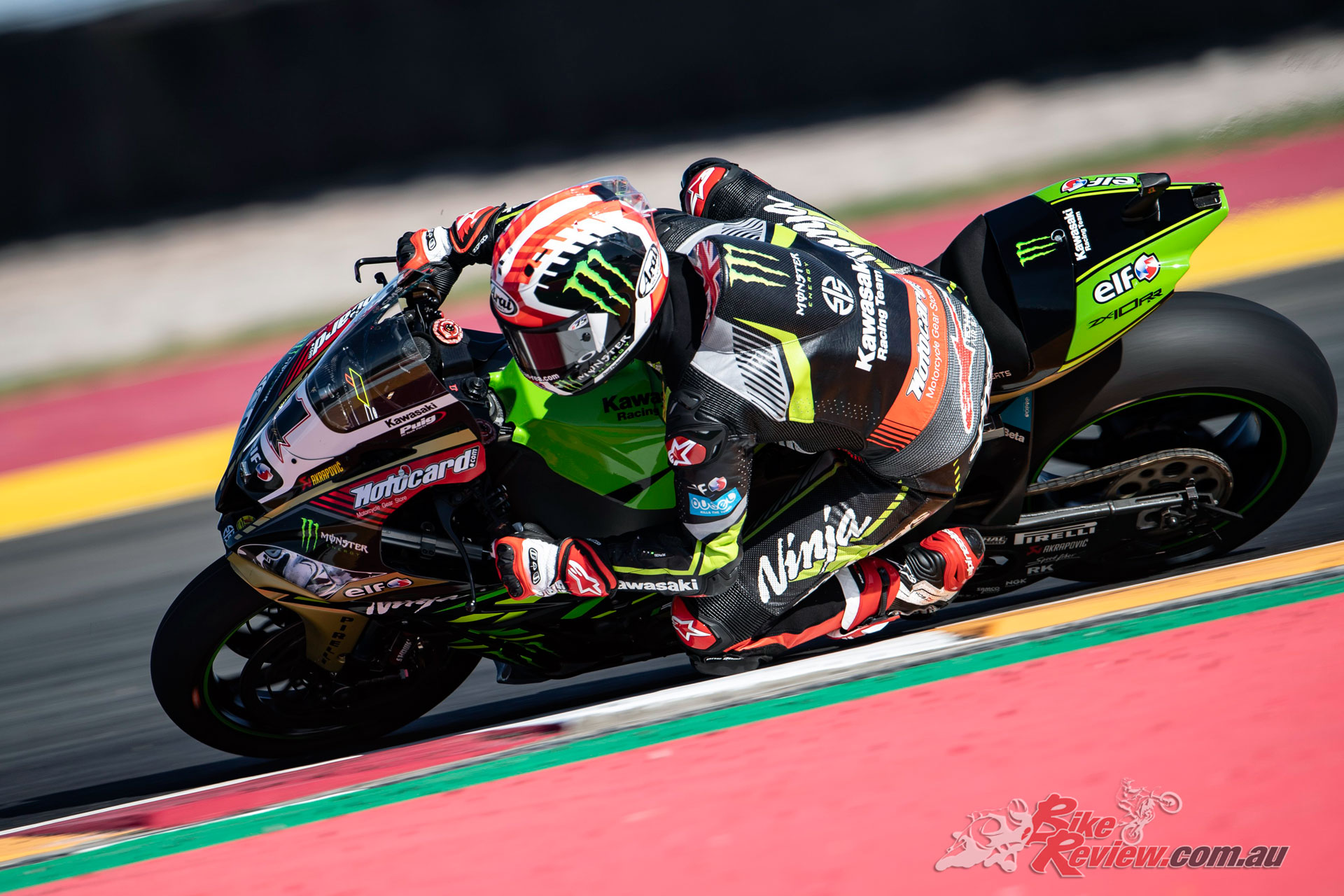 After being clearly outpaced in qualifying by the veteran Italian rider, Rea shot out with a vengeance at the lights, taking the clean line through turns 1 and 2 and quickly opening a gap with the riders behind. Tom Sykes (Kawasaki Racing Team WorldSBK) quickly moved into third, with good starts from Alex Lowes (Pata Yamaha Official WorldSBK Team and Chaz Davies (Aruba.it Racing – Ducati) also pushing them up the ranks. There was disappointment for the home fans however, as Leandro Mercado (Orelac Racing VerdNatura) crashed out whilst riding inside the top ten.

Rea’s prediction on Friday was that the race would be decided inside the last 3-4 laps, with big questions marks over how the world superbike machines would respond to 21 laps around the pristine Argentinian track. But if anything, the champion was more dominant than ever here, riding at a breathtakingly consistent pace with barely any laps above the 1’40 benchmark, even in the final laps of the race. 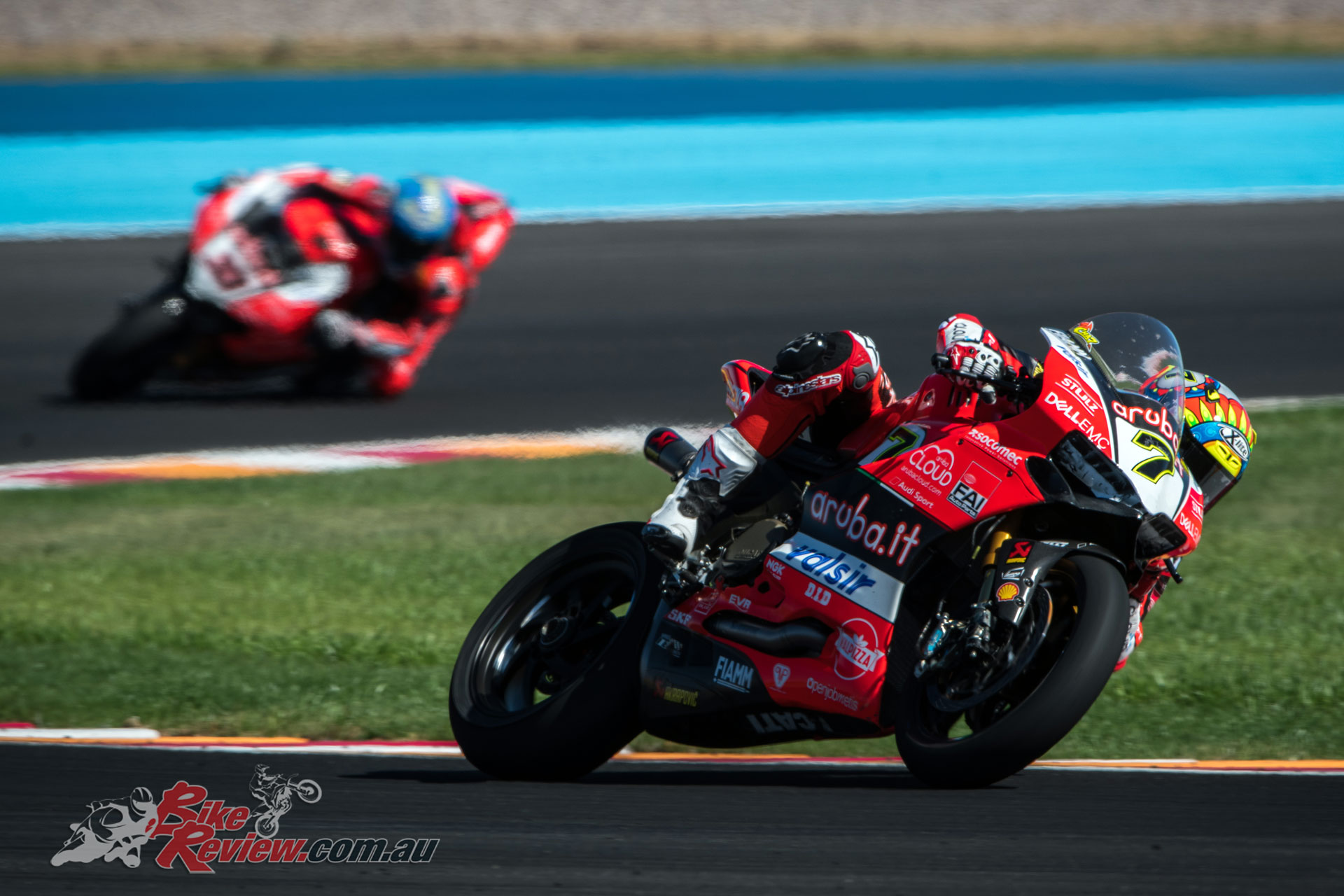 With Rea untouchable and Melandri sitting comfortably in second, all eyes were set on the scrap for third position. There’s no lack of overtaking spots at the stunning Argentinian circuit, and that showed in the first race held here: Laverty moved past Sykes in lap 5 on the back straight, whilst a four-way tussle behind for fifth saw Lowes fall back behind Razgatlioglu, Davies and Xavi Fores (Barni Racing Team) in short succession.

The four caught up to Laverty and Sykes shortly after: the Turkish rookie bested Sykes in lap 13 and the Aprilia man one lap later, with Davies crashing and skidding out as he also attempted to pass Sykes, with raindrops making an appearance at the midway point of race one.

With Rea crossing the line a full nine seconds ahead of Melandri, a fantastic Razgatlioglu managed to keep hold of third and clinch his second world superbike podium position, with Fores climbing to fourth in the penultimate lap. Laverty was fifth at the flag, with Sykes behind in sixth and Lowes crossing the line in seventh. 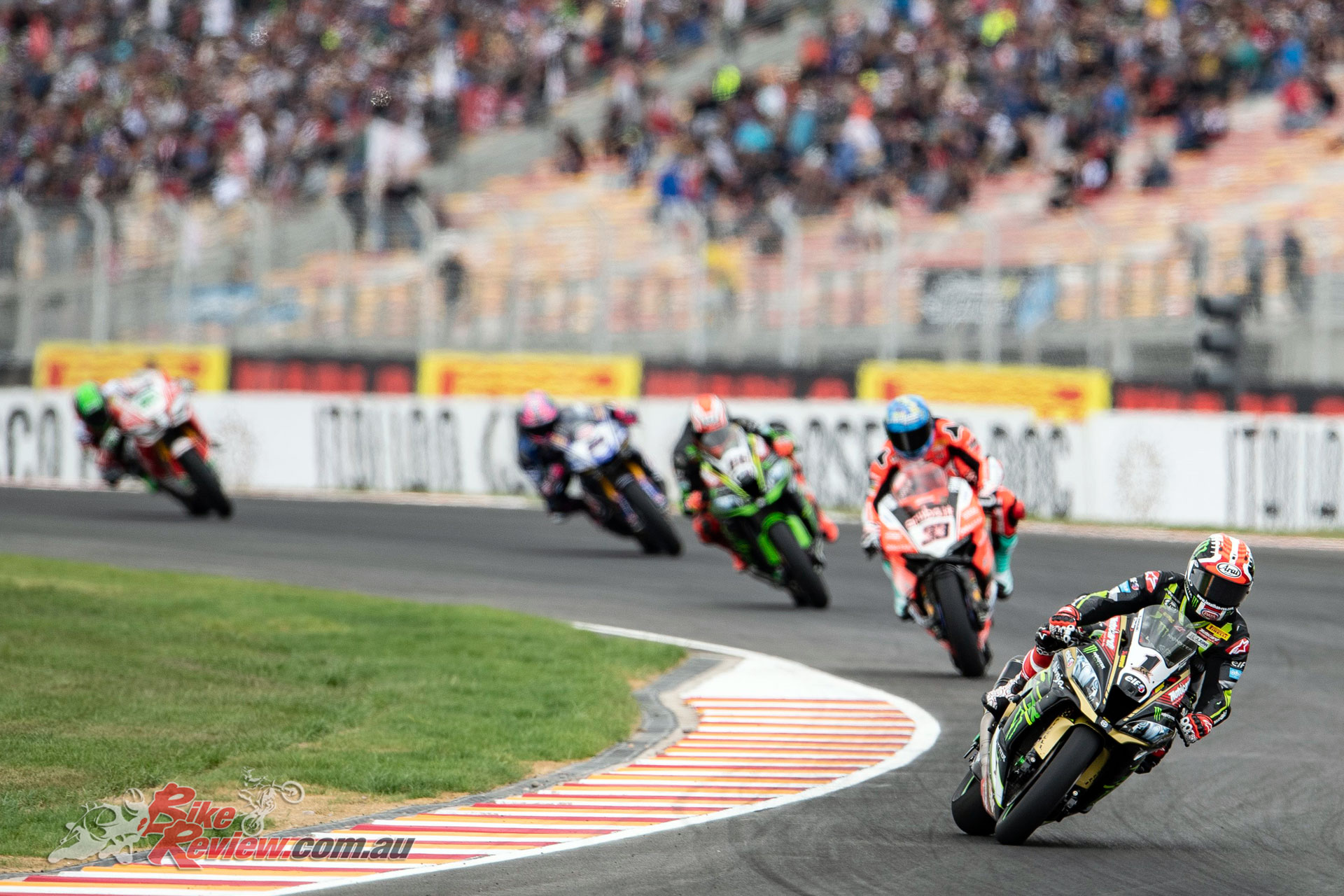 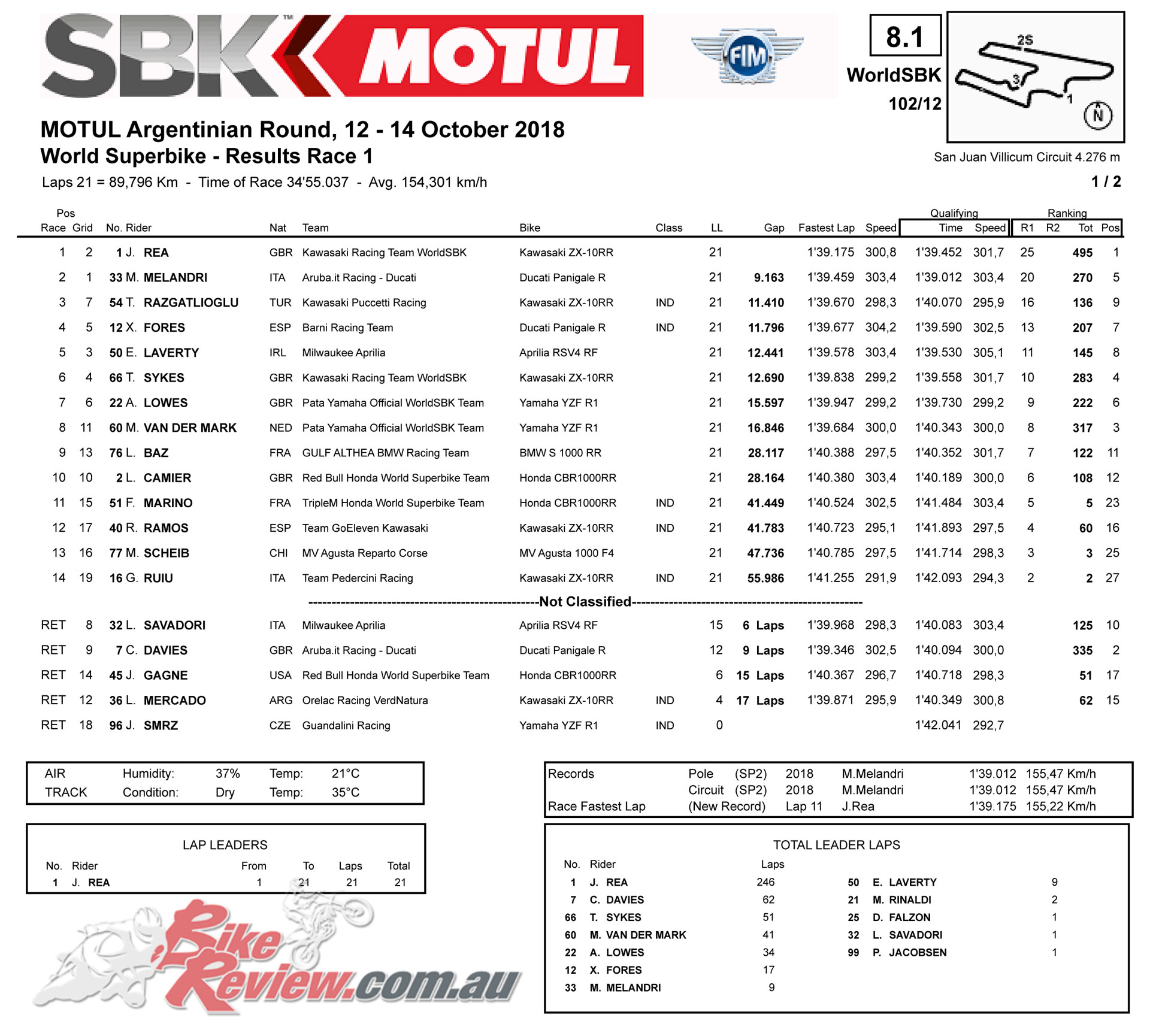 It’s a ten in a row for the world superbike champion, Jonathan Rea, as he claimed his fifth consecutive double of the 2018 MOTUL FIM Superbike World Championship at the new Argentinian track, Circuito San Juan Villicum. The Kawasaki champion was forced to dig deep to take the Argentine double ahead of Xavi Fores (Barni Racing Team), but now holds another record to his name for the most consecutive wins in a world superbike season, beating Colin Edwards and Neil Hodgson’s previous streak of nine victories. 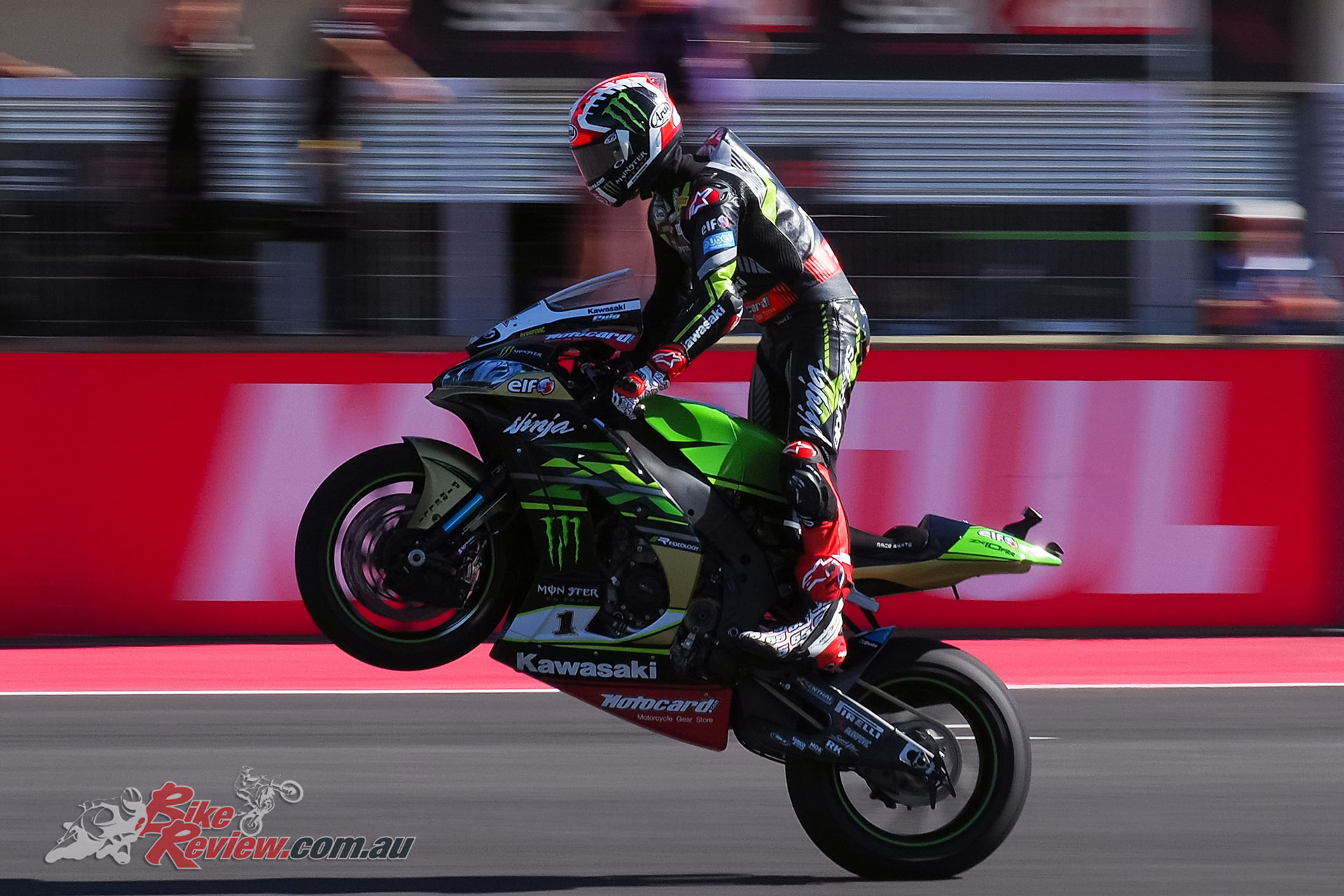 Race two’s opening laps at the Circuito San Juan Villicum were amongst the most chaotic of the entire 2018 season. Fores was quick off the mark from pole, but his partners on the race two front row suffered much worse fates: Tom Sykes (Kawasaki Racing Team WorldSBK) immediately fell to the fringes of the top ten, while Eugene Laverty (Milwaukee Aprilia) crashed out unopposed in lap three whilst riding in second place.

Rea’s race start was far from perfect. A strong start pushed him up into the top five at the lights, but a succession of mistakes through the end of lap one and the first half of lap two saw him lose positions to Alex Lowes (Pata Yamaha Official WorldSBK Team) and Chaz Davies (Aruba.it Racing – Ducati), nearly falling one further under pressure from Marco Melandri (Aruba.it Racing – Ducati). 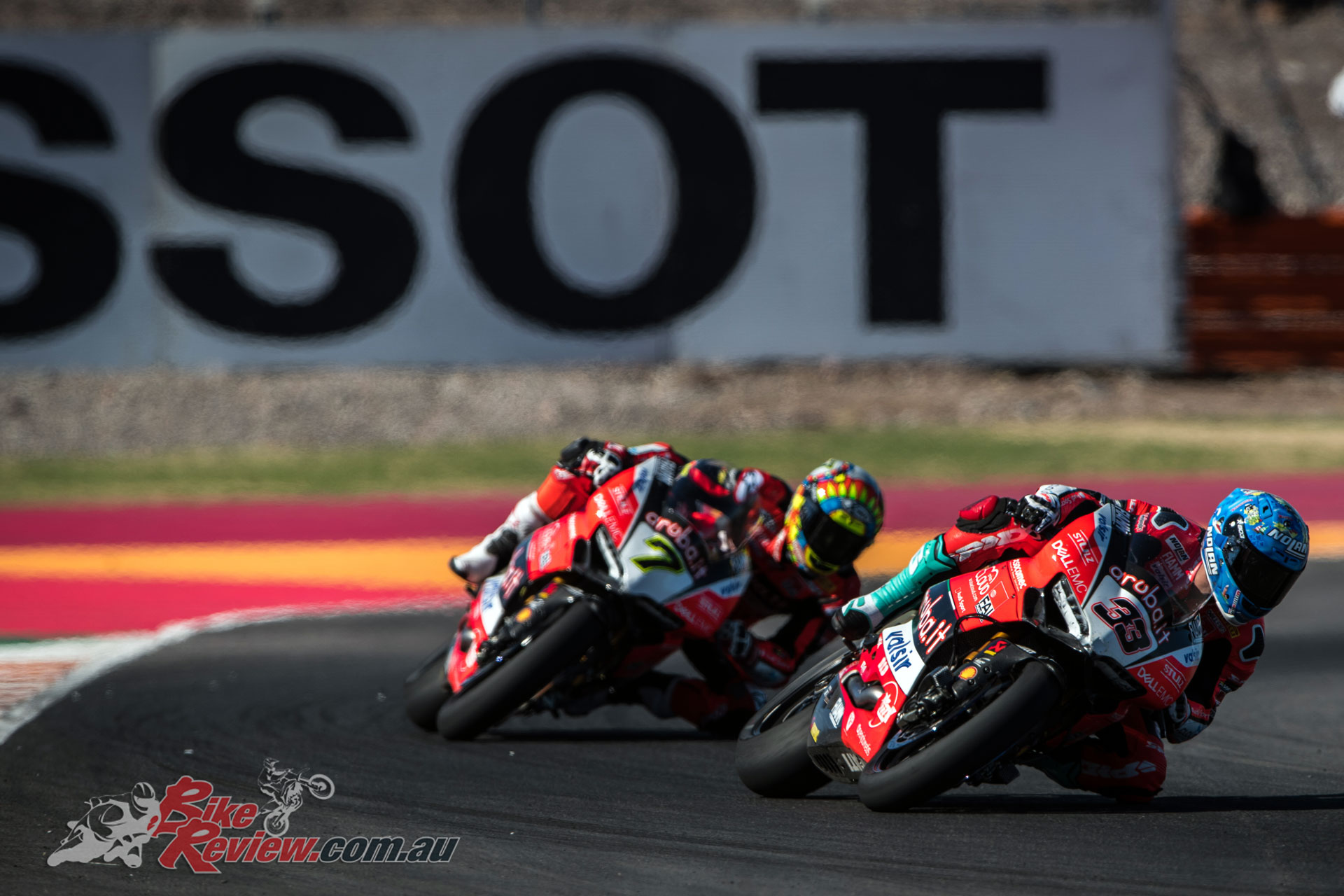 The Argentinian fans would not have to wait long for the comeback. Rea saw himself past Davies after the Welshman went in too hot at turn one, then made good use of the back straight slipstream to edge smoothly past Lowes. A mistake from Razgatlioglu also left the Turkish rookie in the Northern Irishman’s wake. Meanwhile, a bruising battle for fourth saw Davies, Melandri and Lowes exchange places turn after turn.

At the four-lap mark, Fores had already opened a huge three-second gap taking advantage of Rea’s troubled start. This didn’t last: at a rate of nearly a second per lap, Rea caught up with the Spaniard and fought his way through to the front inside lap eight. Fores immediately pounced back at the back straight, but the Kawasaki’s pace was too much on the day and the weekend and, after moving back into the front half a lap later, Rea blasted into the lead and head-first into his tenth consecutive win, unchallenged from that point forwards. 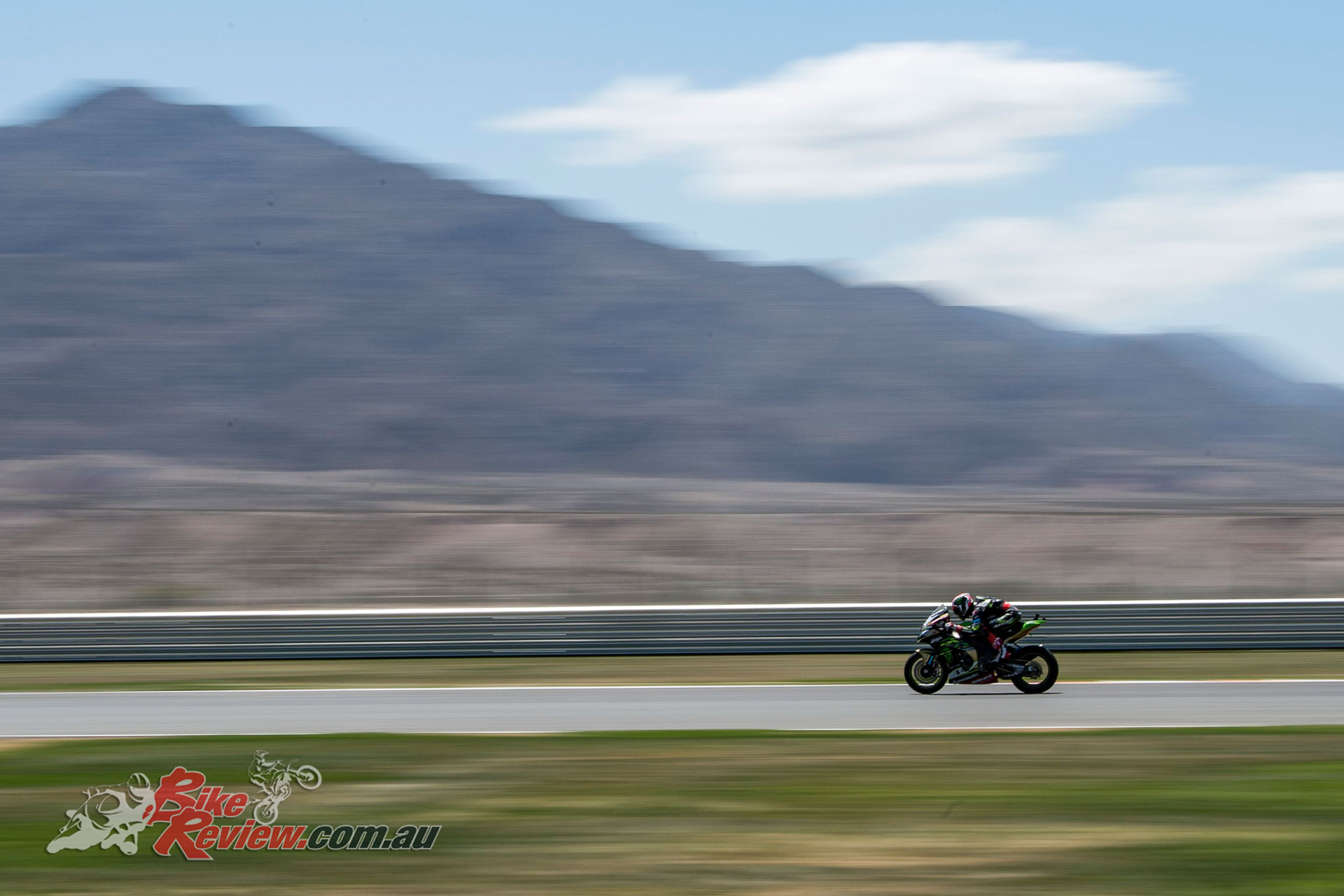 A cool second for Fores means that he is now the official independent rider’s champion, thanks to his fifth podium of the year. Marco Melandri managed to return to the rostrum after a fantastic race-long duel with Davies, who finished fourth and again increases his gap with Michael van der Mark (Pata Yamaha Official WorldSBK Team) to 24 points, after the Dutchman ended race two in ninth.

Tom Sykes managed to climb back to fifth following a strong second half to his race, with Lowes in sixth and Razgatlioglu back in seventh, after fading in the late stages. An anticlimactic ending to the rookie’s Argentinian round, but he still manages to claim the best points haul of his WorldSBK career over a race weekend. 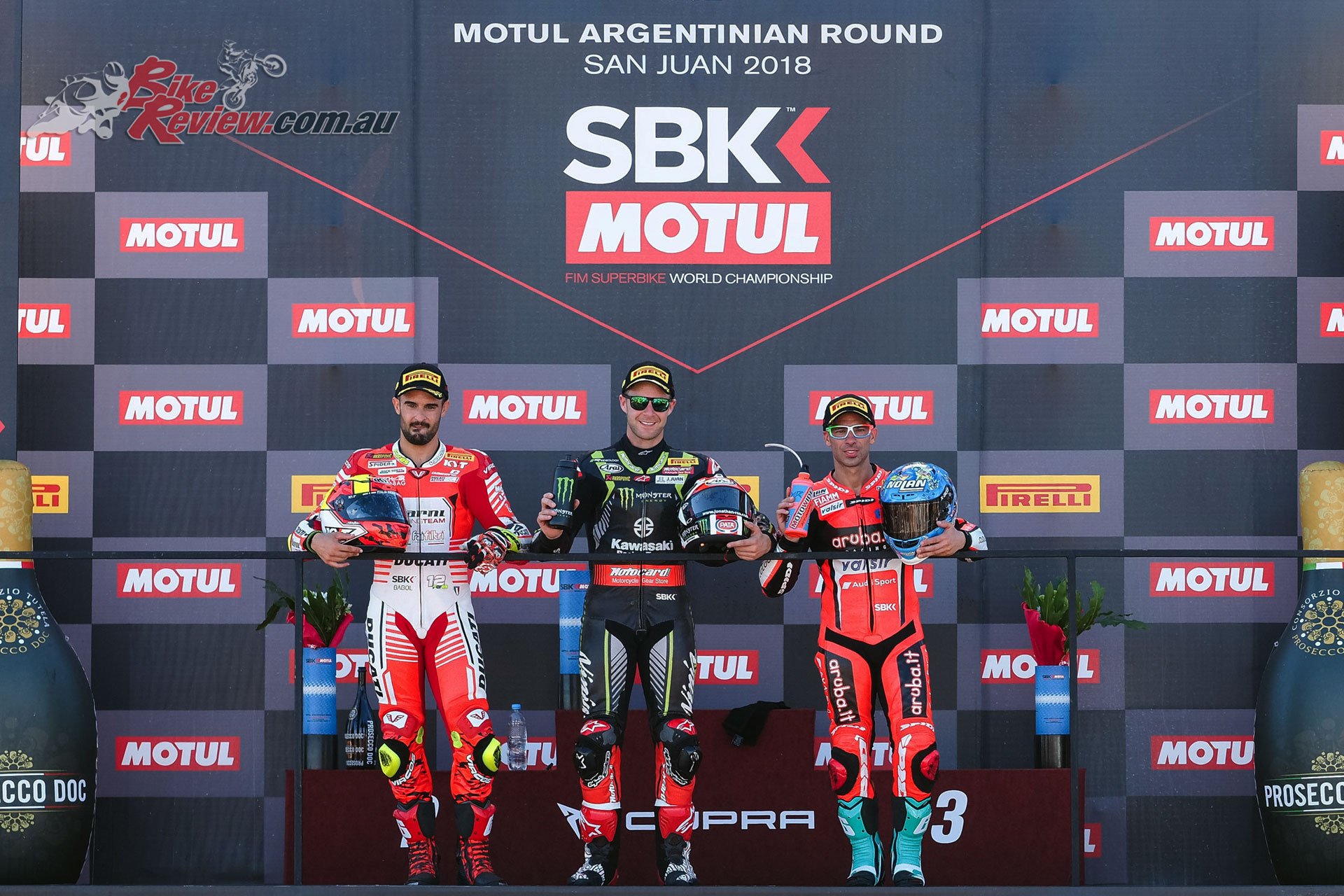 Lorenzo Savadori (Milwaukee Aprilia) finished race two in eighth, whilst Jake Gagne (Red Bull Honda World Superbike Team) made it into the top ten for only the third time this season. Local hero Leandro Mercado managed to finish in twelfth, after crashing in race one. 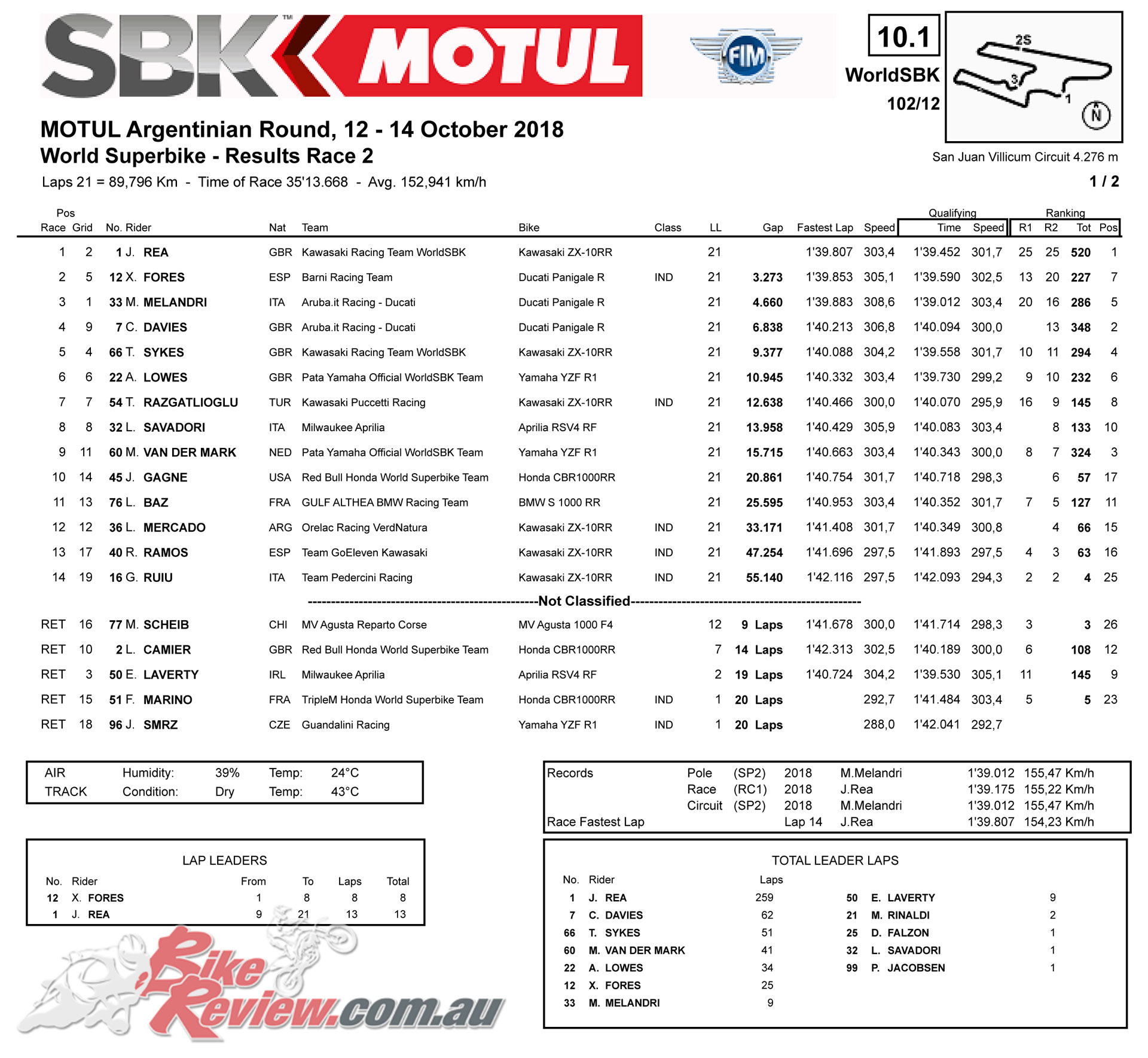 With the flag down after a nerve-wrenching first contest at the Circuito San Juan Villicum, it is now official: the new champion will be crowned at the final race of the season. Jules Cluzel (NRT) did everything he could to keep the battle alive for Qatar, taking his fifth win of the 2018 FIM Supersport World Championship and forcing Sandro Cortese (Kallio Racing) to settle for second, with 2017 champion Lucas Mahias (GRT Yamaha Official WorldSSP Team). 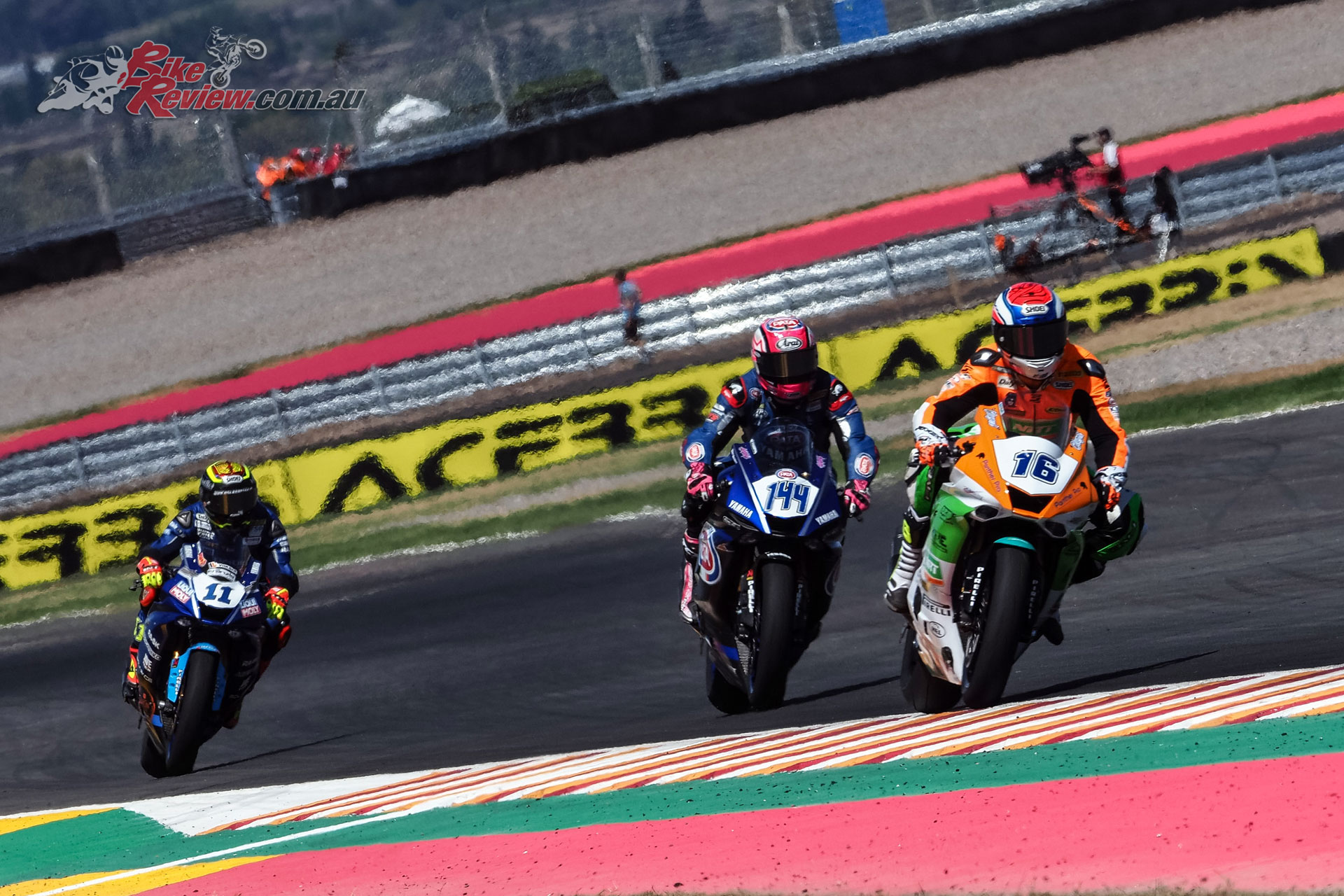 Cluzel grabbed the holeshot at the start, moving ahead of Mahias from fourth on the grid inside lap one. The leading pair soon became an all-French trio, as Corentin Perolari (GMT94 Yamaha) flew up the ranks from seventh on the grid to third. It came at the expense of Federico Caricasulo (GRT Yamaha WorldSSP Team), however – Perolari jetted down the inside line at turn two, the pair clashed, and Caricasulo found himself on the floor, any remaining title options evaporated in the blink of an eye.

The championship leader suffered a disappointing start, slipping down to fourth behind the leading trio. Far from fearing for his lead in the standings, Cortese chose to play the long game. The German slowly chiselled away at the gap with Perolari, eventually finding a comfortable slipstream down the back straight to go into third. Same strategy to move past Mahias: down the kilometre-plus straight at San Juan, taking good advantage of the slipstream with less than five laps to go. 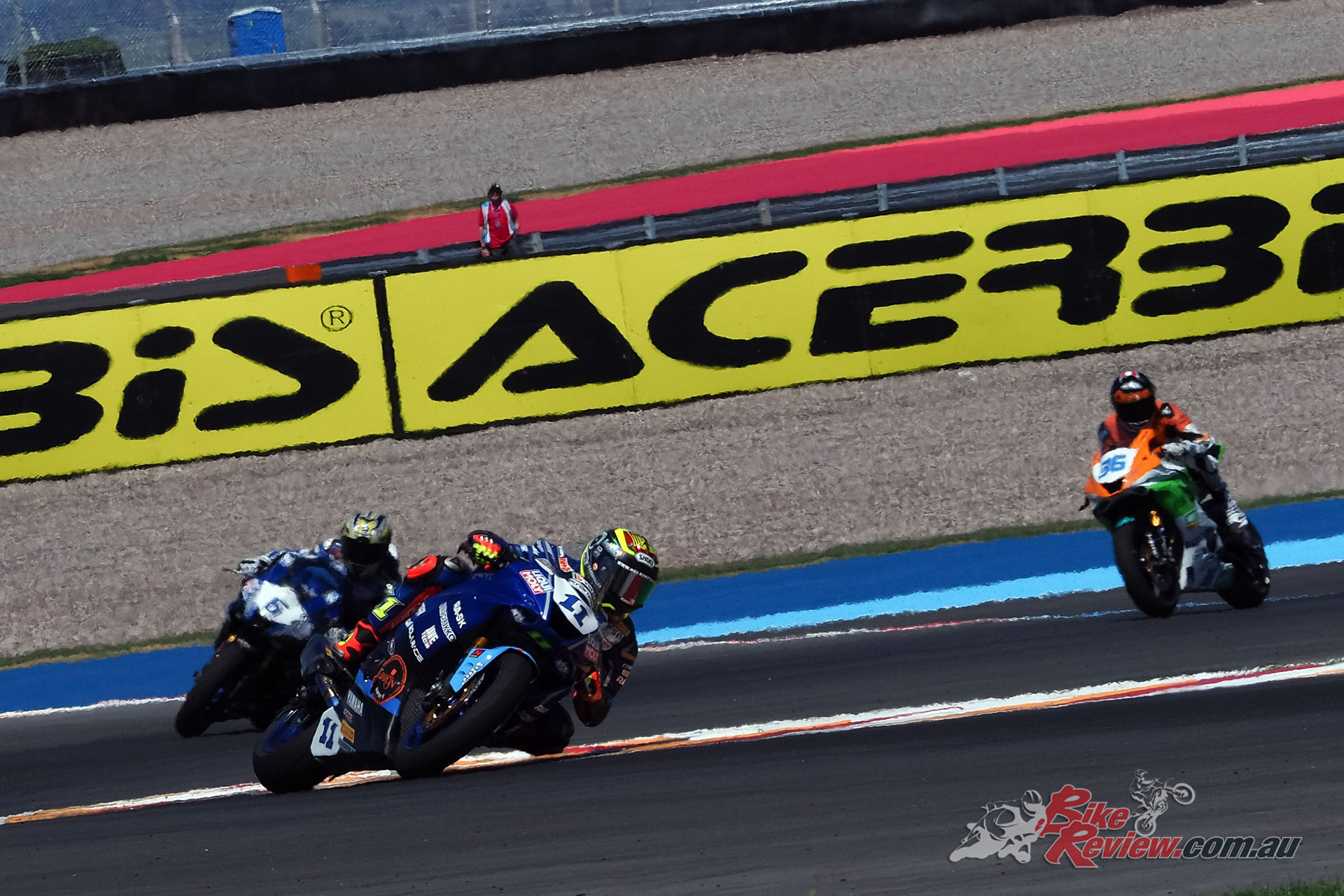 Then came the much-awaited showdown. Record laps tumbled one after the other, both men left in the championship battle pushing harder than ever before – but Cortese finding that extra inch, cutting tenth after tenth off Cluzel’s lead. The German set his eyes on the final lap and that extraordinary back straight, barely a couple of tenths behind at that point. But he found the extra speed just too late: Cluzel defended his line masterfully, and with the Frenchman marginally stronger in the final sector all race he managed to meet the chequered flag ahead. Cortese’s lead is now down to six points: a repeat of this result in Qatar would grant him the world title – but the pressure is on.

Mahias crossed the line in third for a repeat of the Magny-Cours podium, with Thomas Gradinger (NRT) also repeating his fourth position from France. Perolari got a nose ahead of Randy Krummenacher (BARDAHL Evan Bros WorldSSP Team) in a rip-roaring sprint to the line, defeating the Swiss rider for fifth. 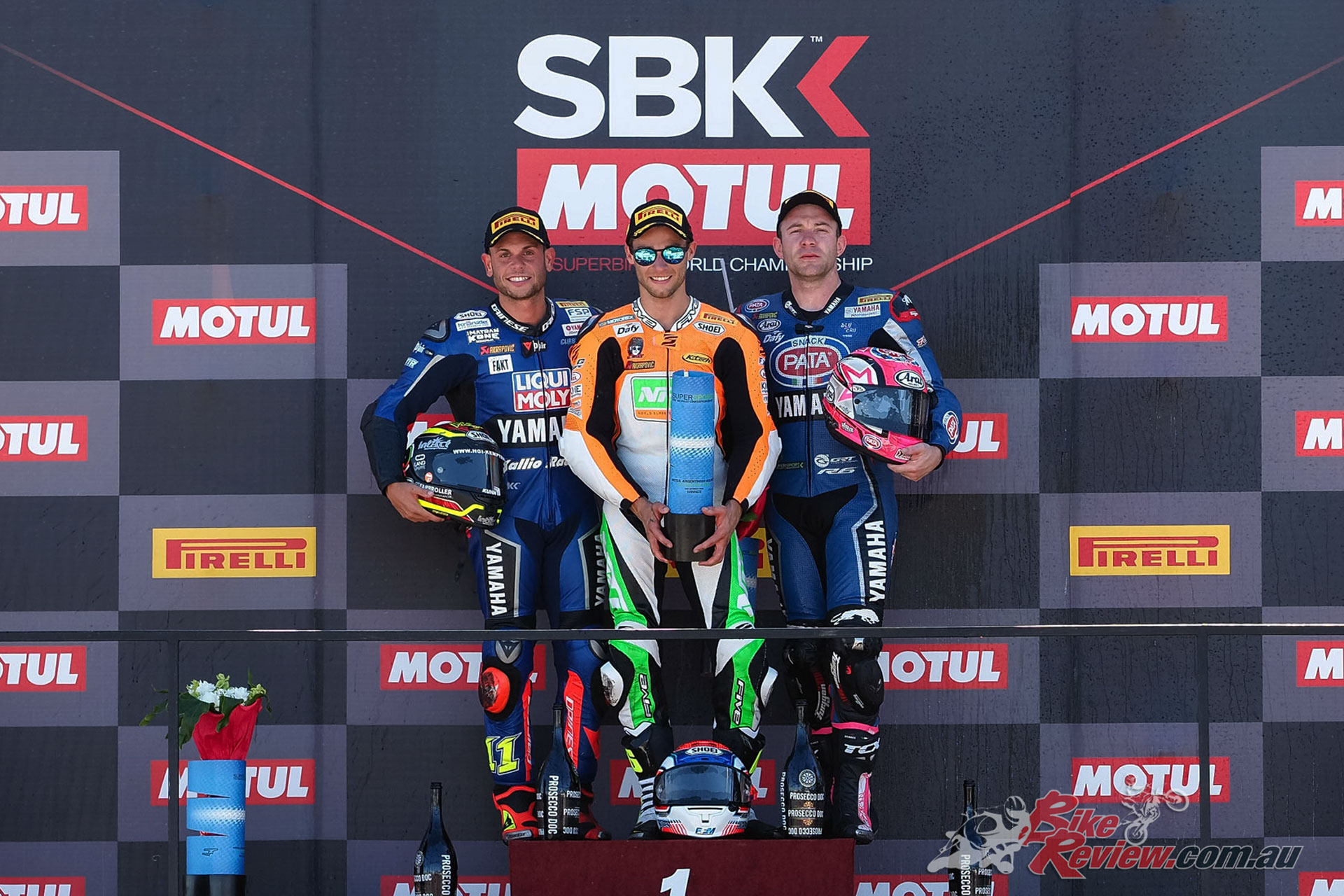 Kyle Smith (CIA Landlord Insurance Honda) was the first non-Yamaha rider in Argentina, leading a professional yet solitary race to seventh, followed over twelve seconds behind by the Kawasaki pair of Hikari Okubo and Héctor Barberà (Kawasaki Pucccett Racing) in eighth and ninth. Loris Cresson (Kallio Racing) returned to the top ten for the first time since Brno, while Raffaele De Rosa (MV Agusta Reparto Corse by Vamag) was forced to retire after a mechanical issue. 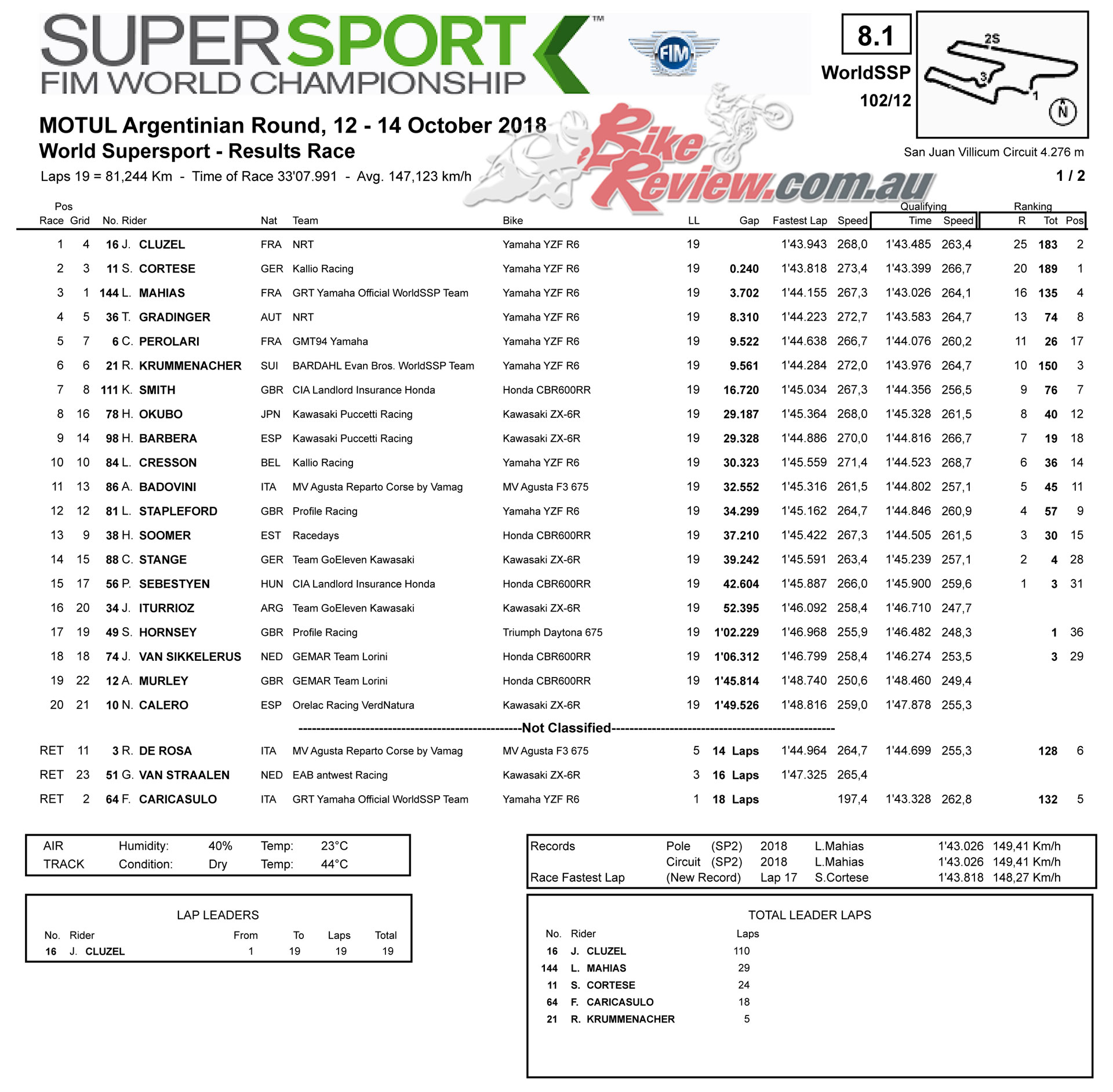