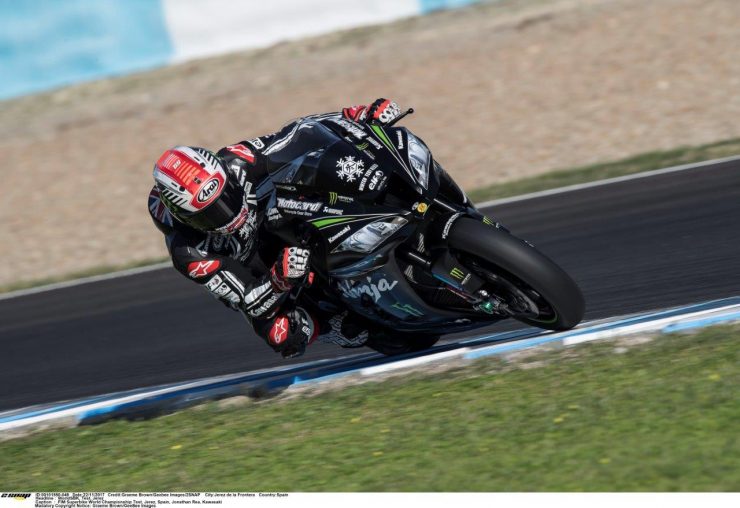 Reigning MOTUL FIM Superbike World Champion Jonathan Rea (Kawasaki Racing Team) continued to impress with his ZX-10RR machine, as he completed the first winter test at the Spanish circuit of Jerez with a lap time over a second faster than the circuit record, as well as beating MotoGP bikes out on track.

Able to work through his full testing regime with the Kawasaki Racing Team, Rea was so delighted with his pace in Andalusia that he finished the day early after setting the time of 1.37.986. 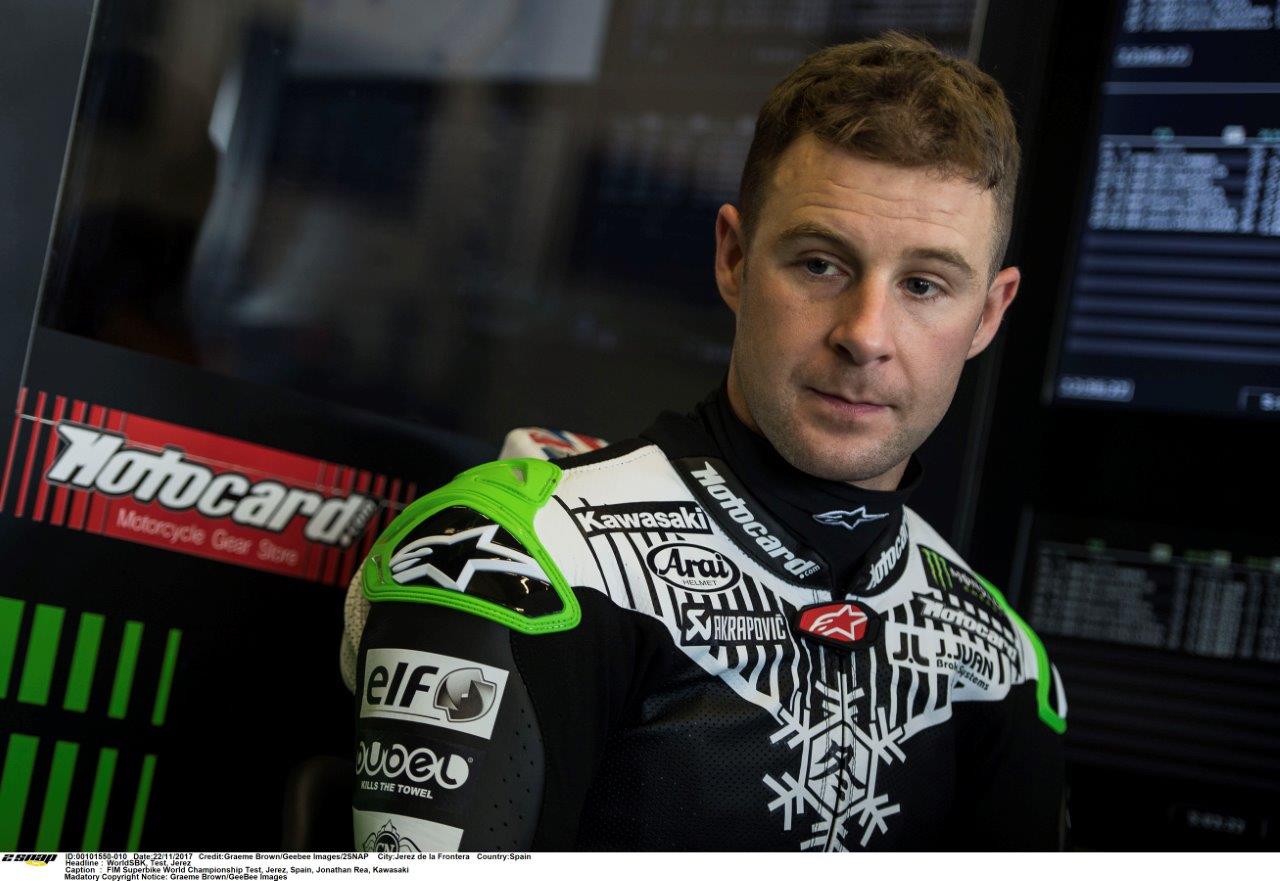 Jonathan Rea (Kawasaki) saying, “This test is really important for us and it is always held at a good time of year. The weather has been consistent so we have been really lucky. There is a lot of rubber down on the track so we were able to evaluate all the components we had to test and we ticked everything in the box. We had to confirm chassis components and a swingarm, and we worked a lot with Showa suspension on Wednesday. When we had everything boxed off we were able to test some new tyres from Pirelli. We also used this test to try out a qualifying tyre and to see our true potential over one lap. I was surprised to be so fast and go into the 1’37s. Good results do not just happen; it has been a lot of hard work. I am very proud of the team as they understood the regulation changes. We were able to hit the ground running when we came here on Monday.” 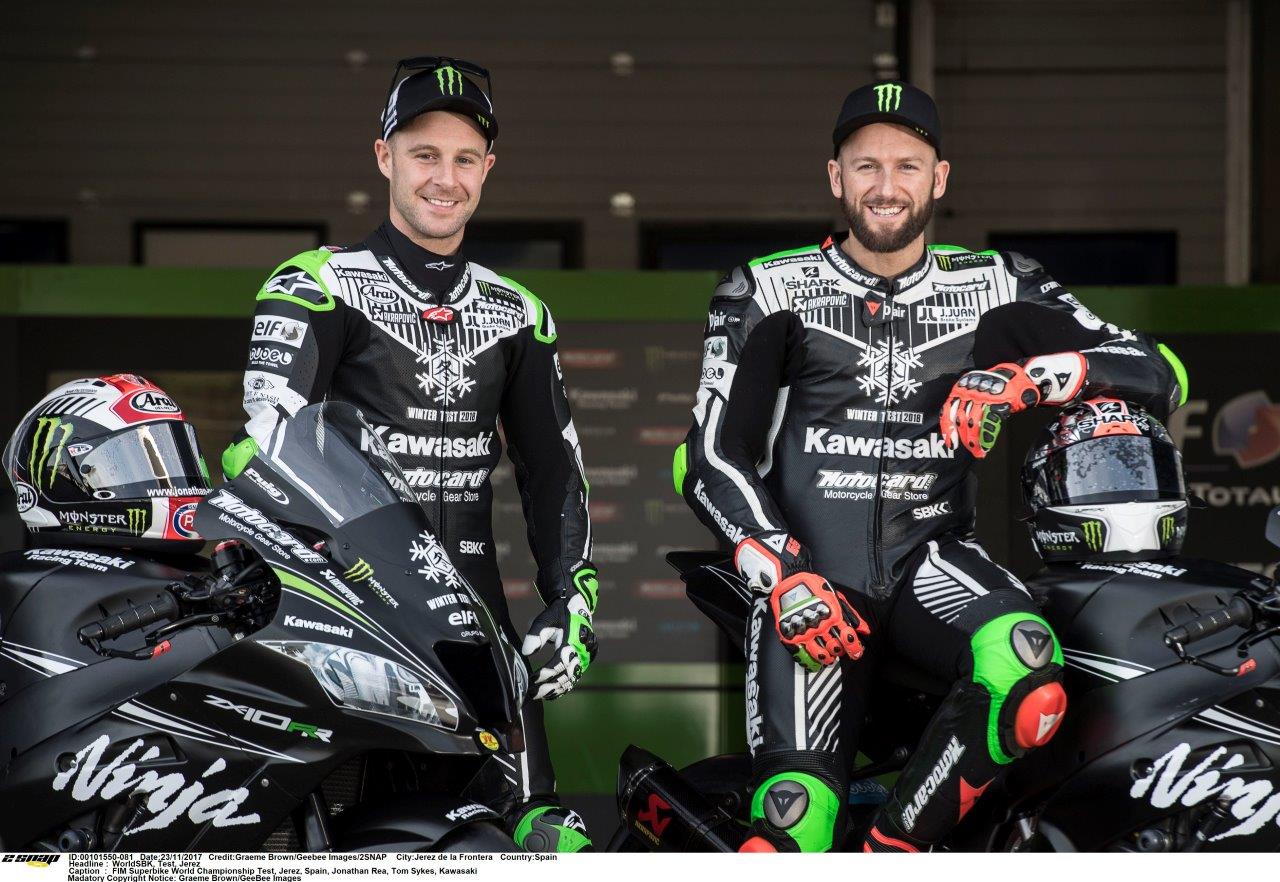 British team-mate Tom Sykes (Kawasaki Racing Team) finished the day second fastest overall, with a lap time of 1.38.326s. Leaving the test with a spring in his step, the Yorkshire-born rider was thrilled with the set-up and pace found on the Ninja ZX-10RR, and with 71 laps put in, the final lap time saw Sykes happy heading into the winter break. 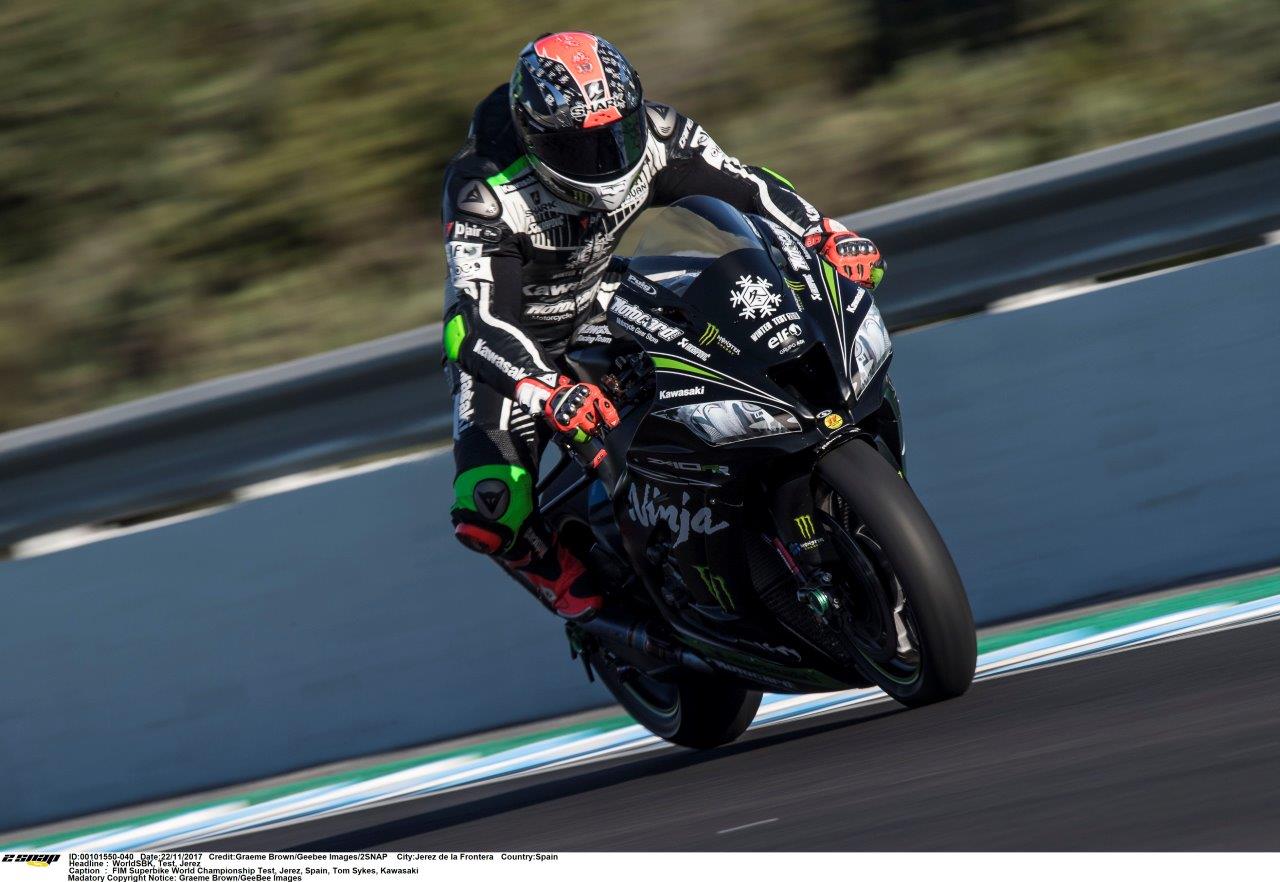 Tom Sykes (Kawasaki) added, “I am really happy with the way the tests have gone. That put a bit of a smile on my face and a spring in my step for the winter. I could honestly not have asked for any more. A big thanks to all the boys, they prepared two top-level bikes which made the testing much more efficient and I have to say I am very pleasantly surprised with my performance on race tyres. We tried a Q tyre, but it was in a bike with a slightly different set-up and chassis package. Since using that Q tyre we have improved the bike again and am very happy about this. It is a good way to go into the winter.” 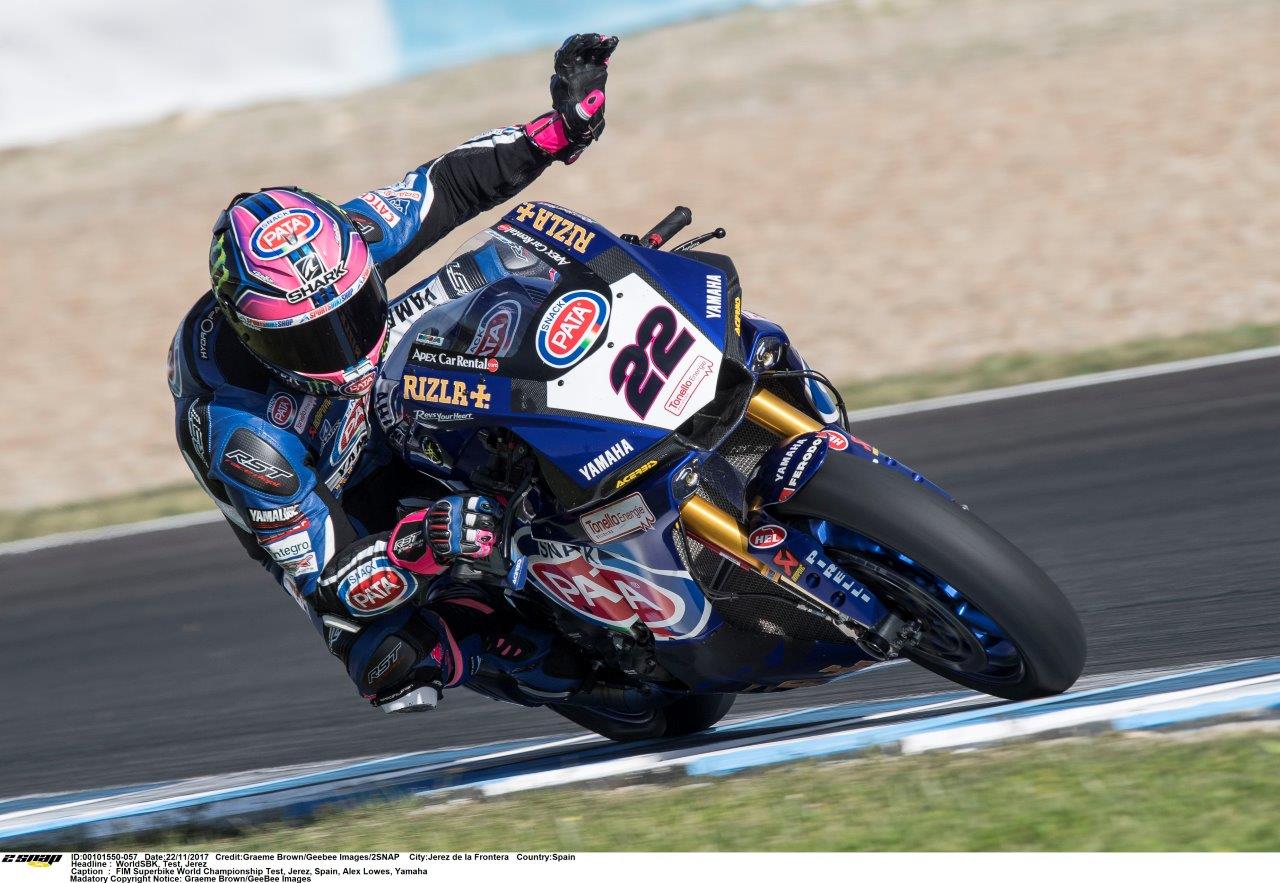 Pata Yamaha Official WorldSBK Team duo of Alex Lowes and Michael van der Mark had a positive week in southern Spain, as the duo began to work according to the 2018 regulations. British rider Lowes was particularly impressive with his lap times, ending the week with a 1.38.622 and running times competitively compared to the MotoGP riders. Van der Mark has been pleased with his testing plan so far, ending in the top seven overall. 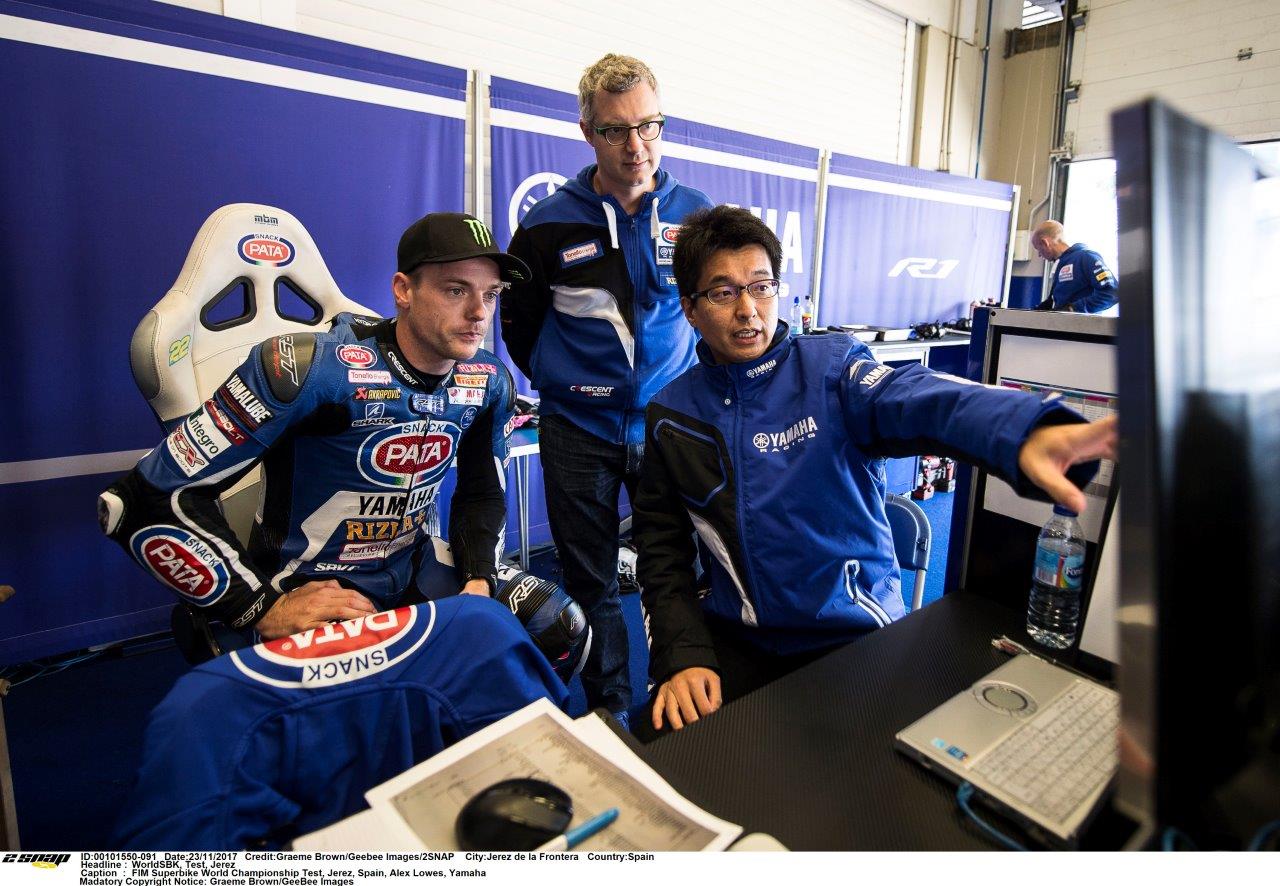 Alex Lowes (Yamaha) explaining, “It’s going quite well, we worked really hard today and tried lots of different things. Obviously this is one of the main points of the test, to collect all the data to improve the bike over the winter. Already we have made a couple of steps forward and it’s going to be an interesting last day tomorrow. One of the biggest areas I am working on personally is corner entry, as this year I was forcing the bike on corner entry, so I’ve been finding a few solutions to help me, but as a team there’s been a lot of new parts but we’ve been working a lot. Today we used the new RPM, in this track there are a few corners where we need to make one extra gear shift up, so I had to get used to that and it will be interesting to see how this in on other circuits.” 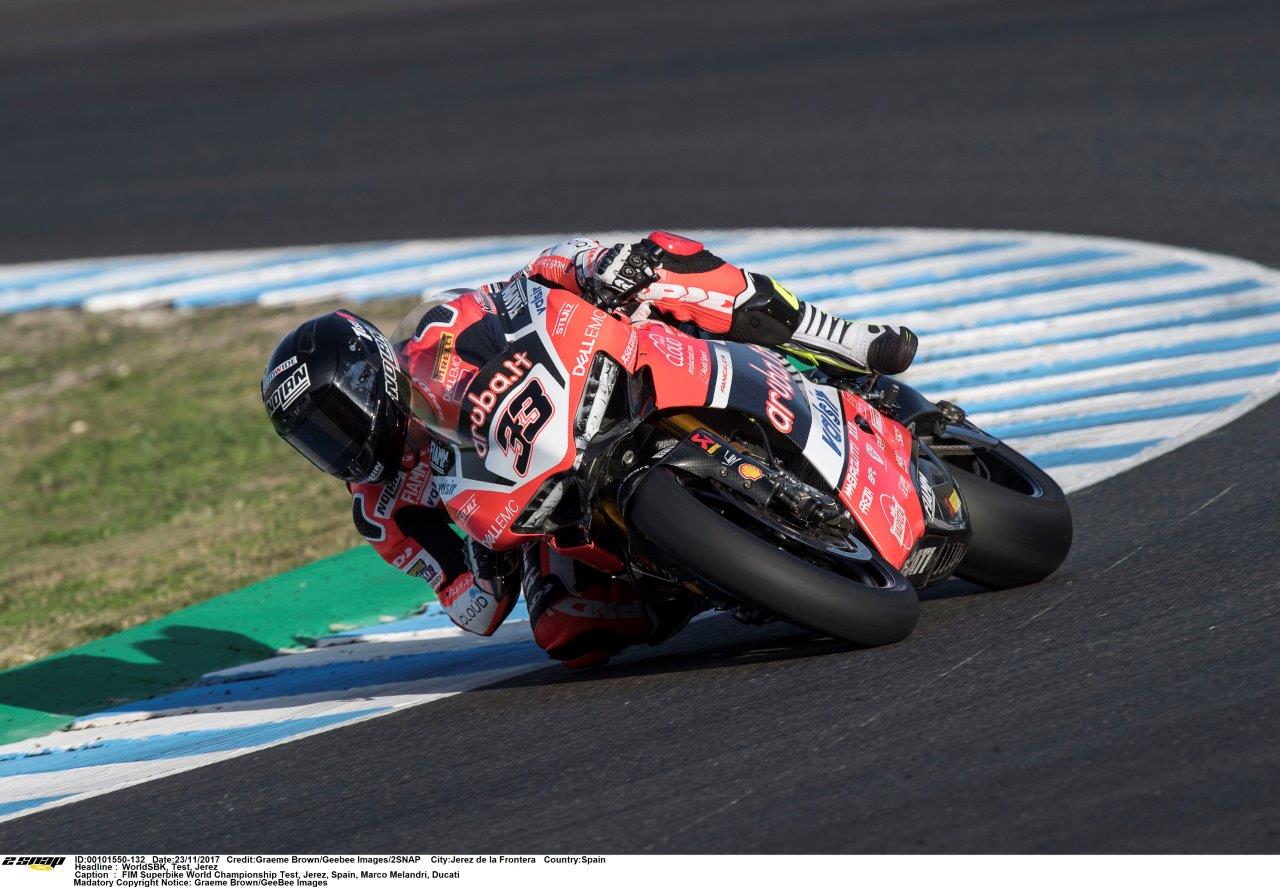 Aruba.it Racing – Ducati rider Marco Melandri was able to work a lot on the new regulations and collected a lot of data for Ducati technicians to work on over the winter. Fastest on day four, he spent a lot of time out on track on the final day and clocked in 76 laps overall. His time of 1.39.577 was enough to put him in the top six, whilst team-mate Chaz Davies was at home recuperating following a big crash on Wednesday. 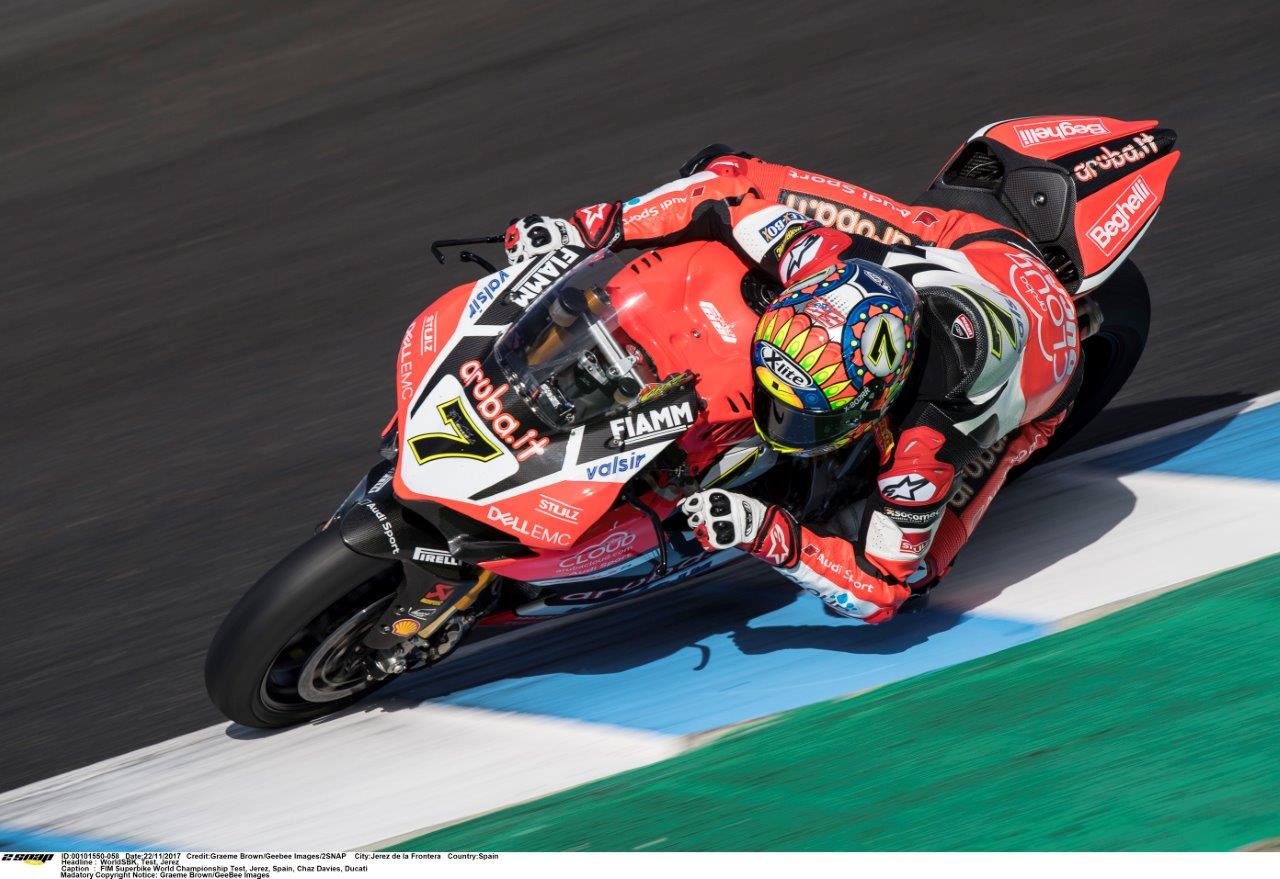 Chaz Davies (Ducati), post crash added, “Unfortunately, a fall on the first day of testing has prevented us from doing most of the planned program. Now I will observe a few days of absolute rest to reduce inflammation, and on Monday I will visit a sports physiotherapist to evaluate a recovery program. It’s the first time I carry a knee injury, we just have patience but I hope and I think I can start training again within a few weeks.” 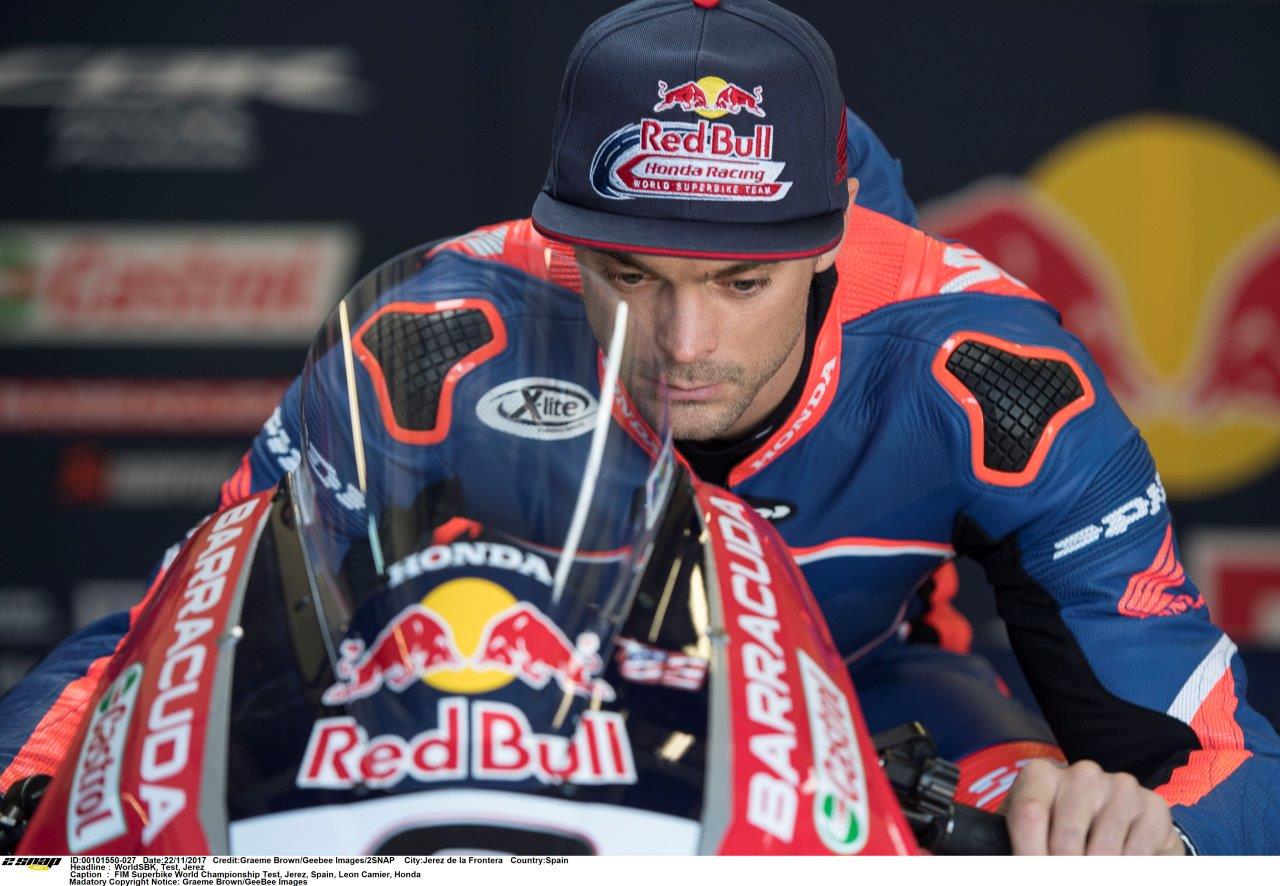 Leon Camier’s (Red Bull Honda World Superbike Team) first appearance on the Fireblade CBR1000RR SP2 was much anticipated, and he was able to deliver with some impressive performances over three days. His final time of 1.39.333 which he set on his final lap of the week boosted him into fourth position overall, leaving Jerez with a strong result into the winter. 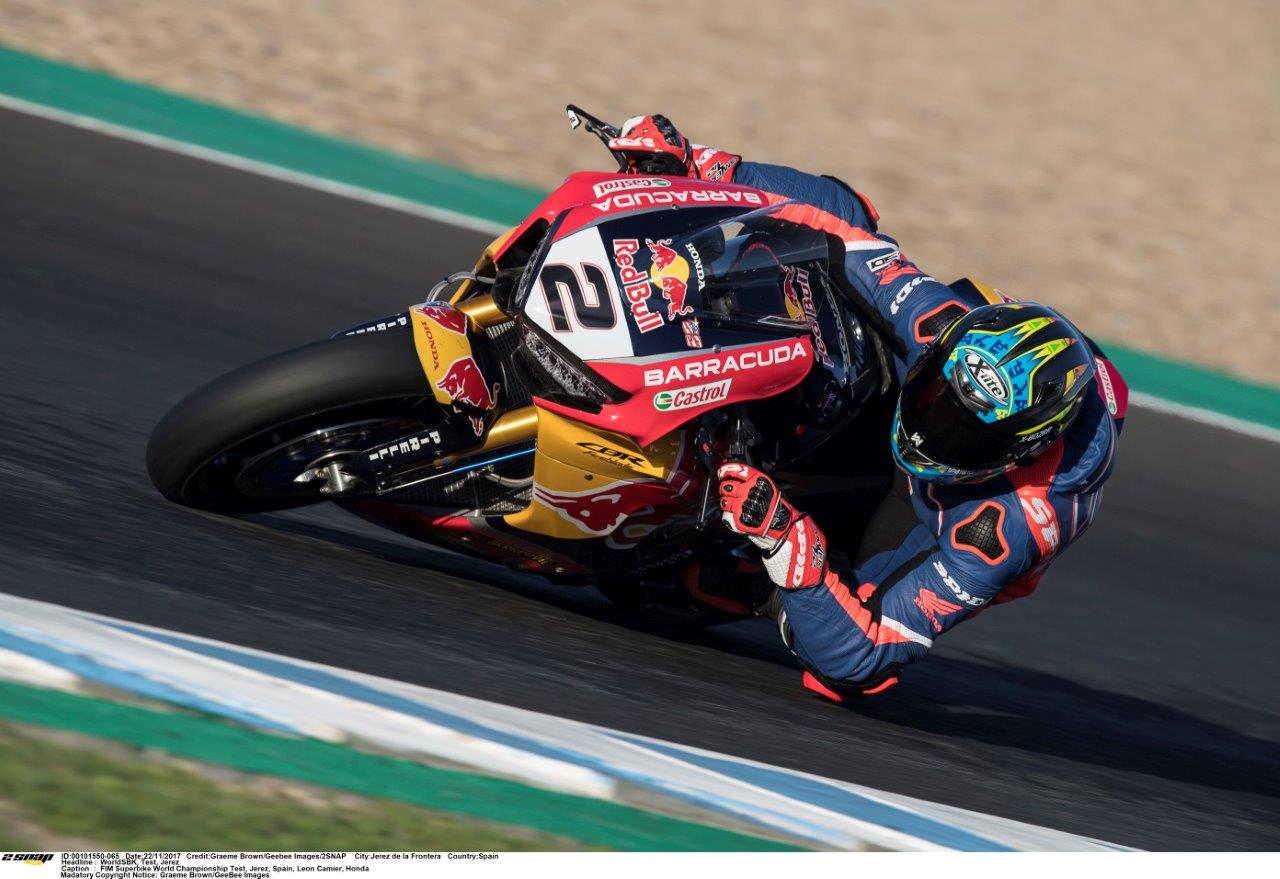 Leon Camier the new recruit to Red Bull Honda) on his new machine for 2018 said, “I was trying to come with an open mind and it was good. My first feeling with the bike was good, the chassis works well, but there are some other things which are obvious that we need to work on. We’ll see, we need to look at the balance and work with the electronics and engine, and see where we end up. We’ve tried a lot of things in a short space of time, so we will keep working to try to find our way. The chassis is working really good, and there’s some strong points to the bike already. It’s a case of me learning how to make the most out of the bike, and how the bike needs to be ridden. We have already made a big step today.” 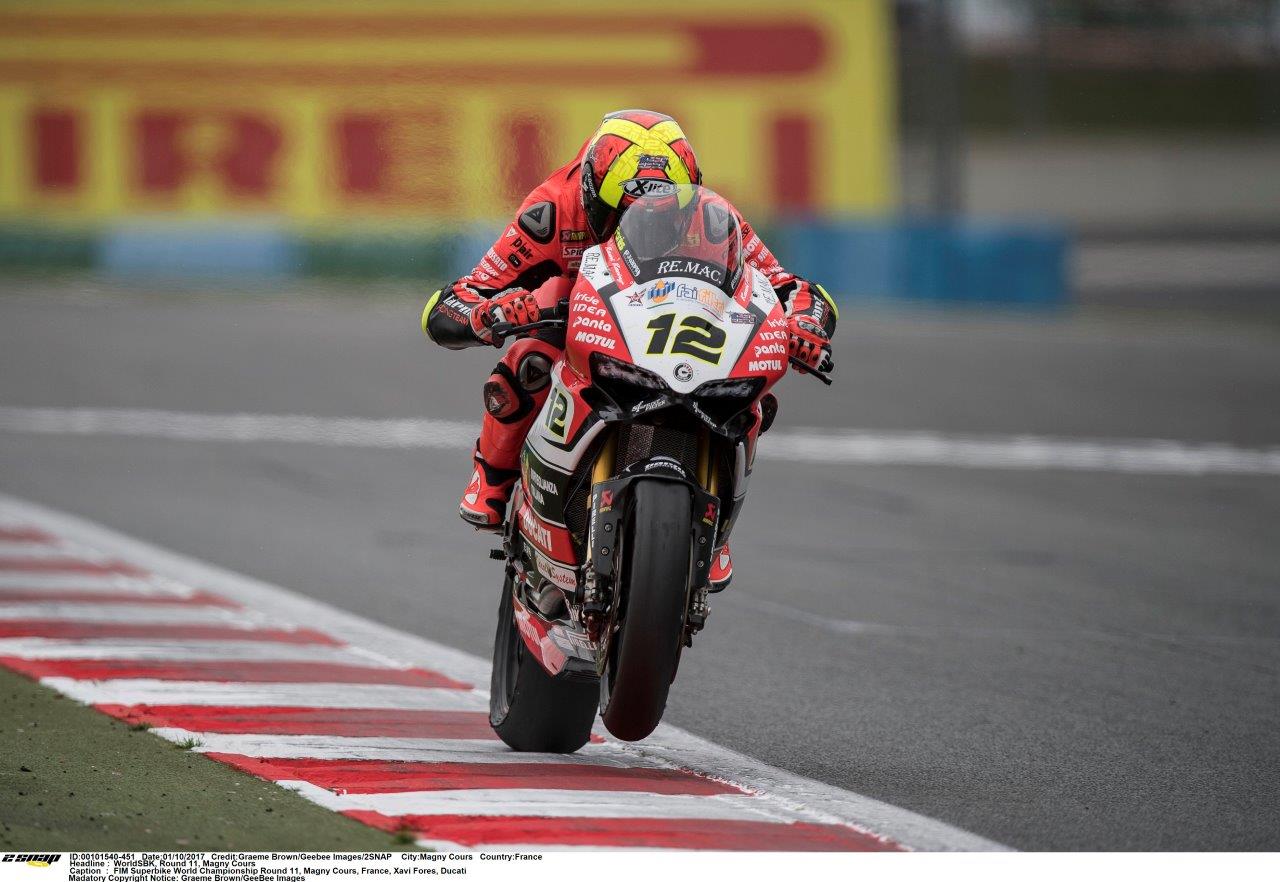 Xavi Fores (BARNI Racing Team) continued to have a strong test as he awaits the 2018 parts for his Panigale, ending the test in fifth position overall, focusing heavily on his swing arm and weight into the rear. After re-signing for the satellite Ducati team, he has begun a strong testing regime and has been working with the new regulations. 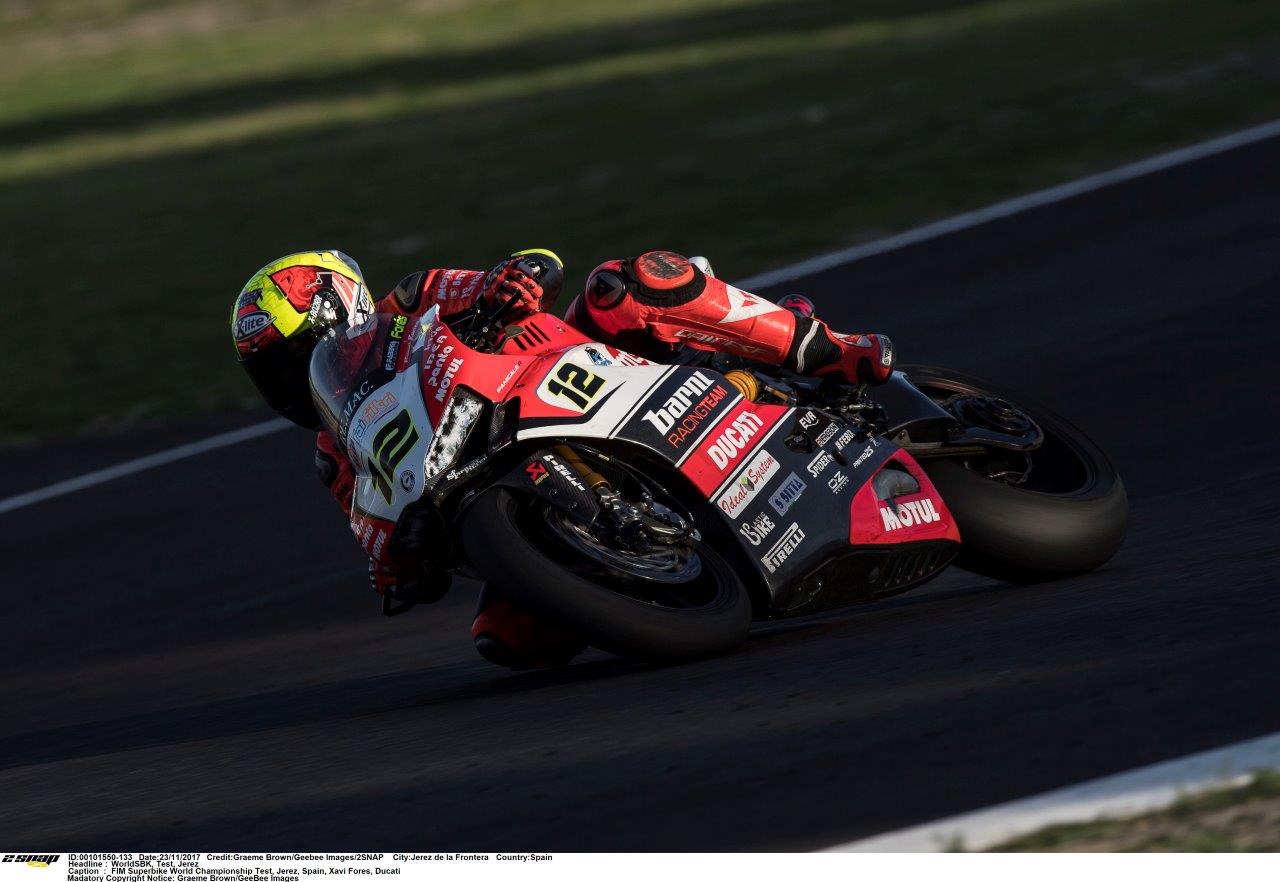 Xavi Fores (Ducati) explained, “Overall today was a good day, we tested something with the rear parts, putting more weight on the rear for it to be easier for us to stop the bike, as this can be a challenge around this kind of circuit. So it was a positive test, I was not able to do a fast lap but my pace throughout the day was constant. We are really happy because we made a big improvement on the race, which means we are working in the right way. We have something to test tomorrow, not something new but to see if we can have some benefits or not, from the material that we have had throughout the season, and especially waiting for the new rules and new parts on the bike in January.”

The next major test for the world superbike contingent will be January 23-24 at Jerez. Then the teams pack up their wares and ship them to Australia’s Phillip Island Grand Prix circuit for the opening of the 2018 season at the Yamaha Finance round from February 23-25, 2018. Tickets available at Ticketek or www.worldsbk.com.au