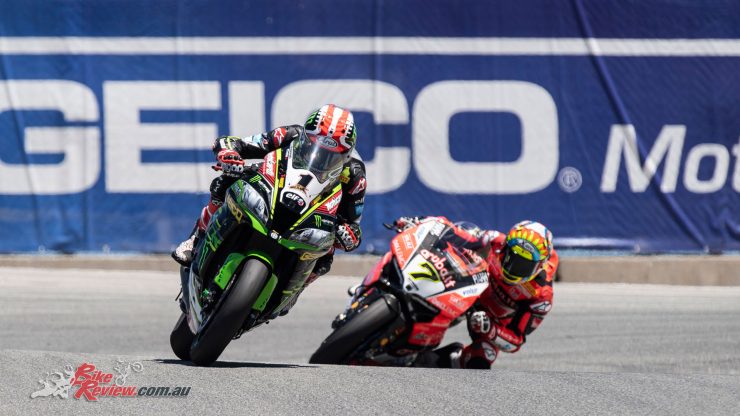 Jonathan Rea (Kawasaki Racing Team WorldSBK) proved that his Friday form was no fluke by taking his seventh win of the campaign in Race 1 at the WeatherTech Raceway Laguna Seca.

The MOTUL FIM Superbike World Championship witnessed a new battle between the defending champion and Chaz Davies (Aruba.it Racing – Ducati), another chapter in the vast collection of showdowns between the pair. This time, it was the Northern Irishman’s time to shine in the blazing Californian heat – his third triumph at Laguna Seca. 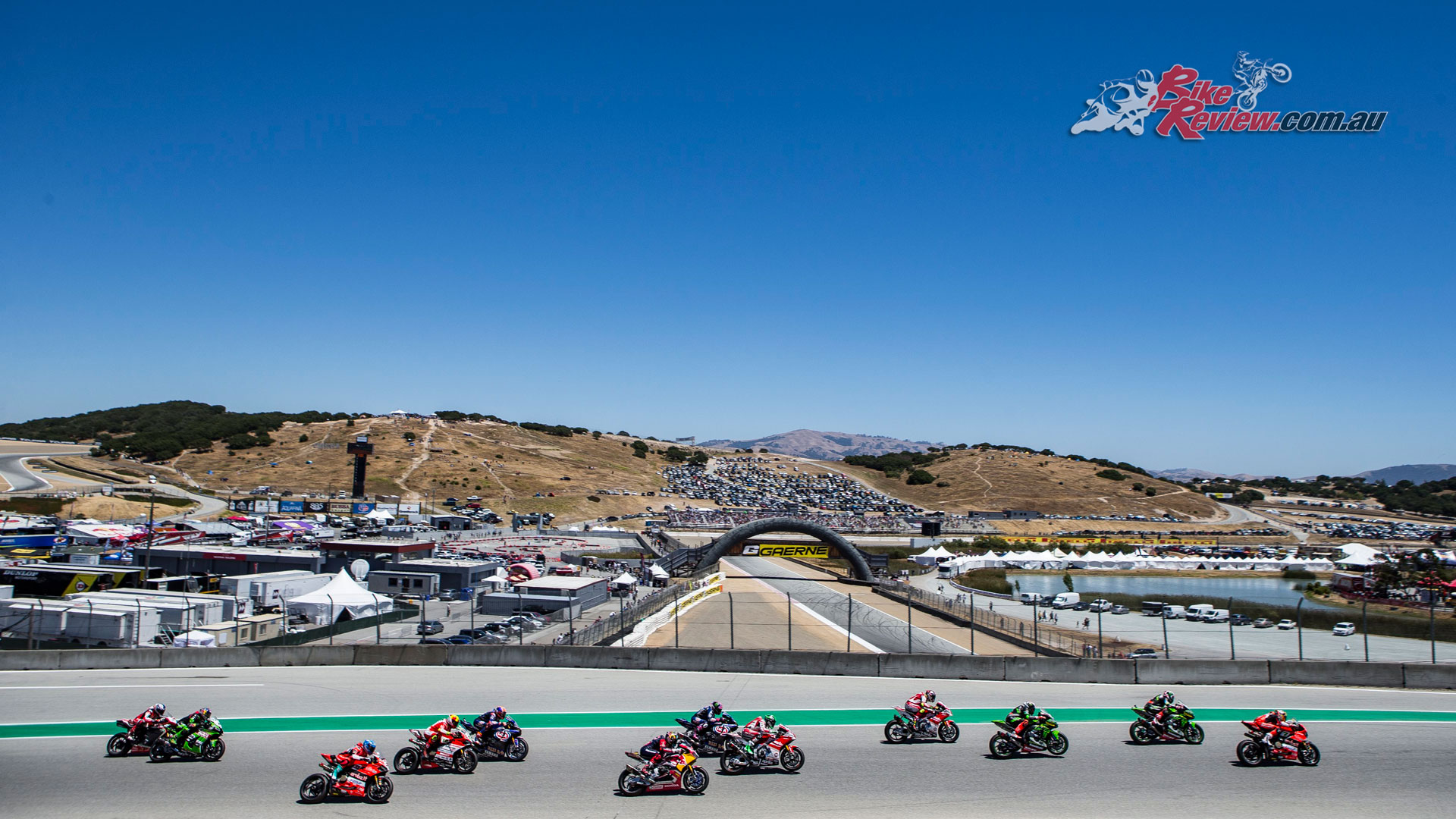 With both men starting on opposite sides of the front row, Race 1 quickly became a two-man affair, after Rea passed Tom Sykes (Kawasaki Racing Team WorldSBK) before Turn 1. A first attack inside that first lap from the defending champion at turn 11 was quickly shrugged off by Davies on the exit, but the warning shot had been fired. Behind, Alex Lowes (Pata Yamaha Official WorldSBK Team) began to pile the pressure on Sykes in third, with Lorenzo Savadori (Milwaukee Aprilia) crashing out after an excellent start from the lights. 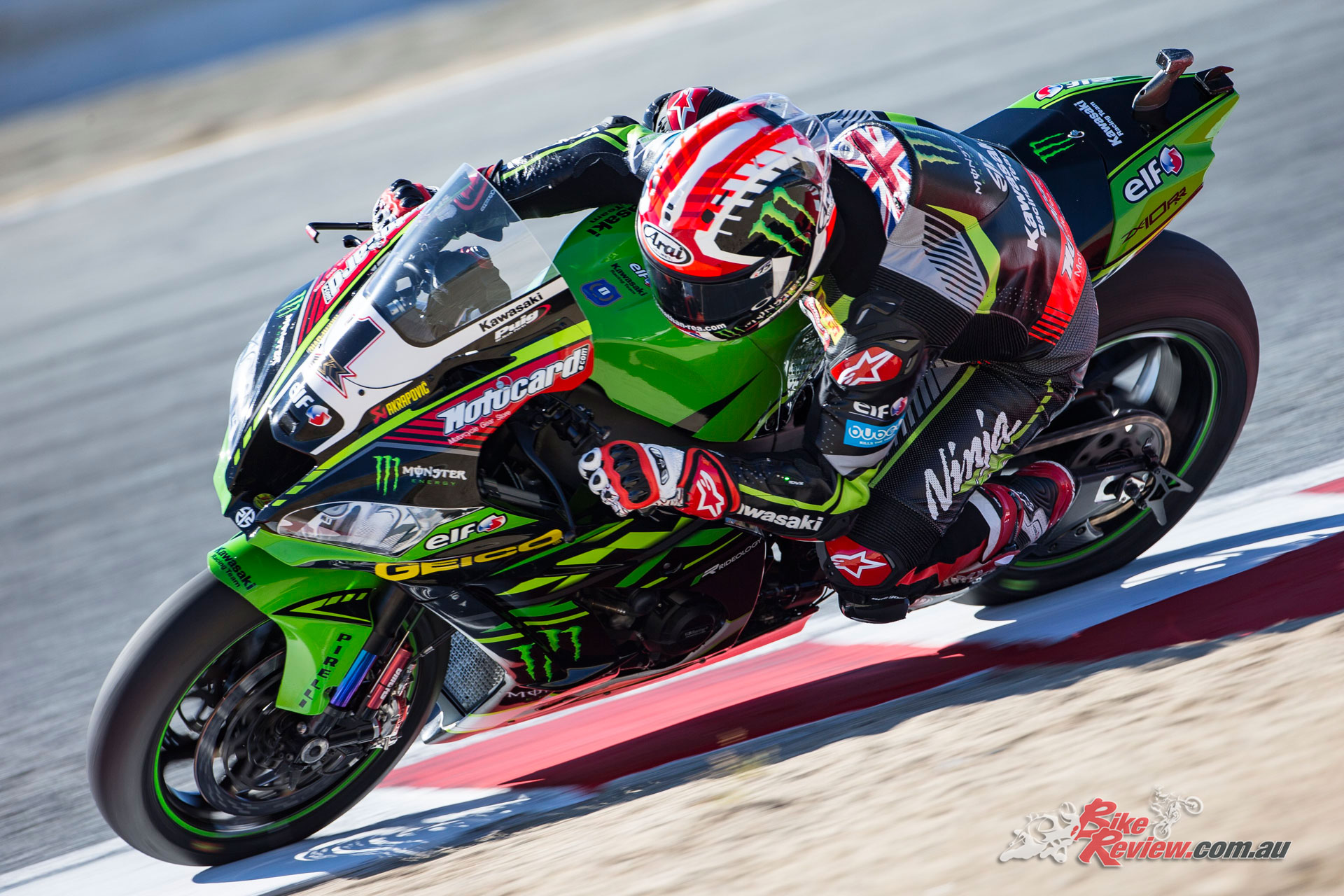 Seven laps passed with no further attacks on the Welshman – and as things turned out, no more were needed. Davies braked a fraction too late on the climb to the Corkscrew, a mistake that Rea was all too eager to take, shooting past the polesitter on the way down the chute.

It’s tough to match the three-time champion at the best of times – with a free track ahead, the task is nigh-on impossible. Rea drowned out any possibility of a comeback, keeping a consistent 1-2 second gap all the way through the latter two thirds of the race. With Davies ending the race in second, the two are now separated by 70 points in the standings, with eleven races remaining on the calendar. 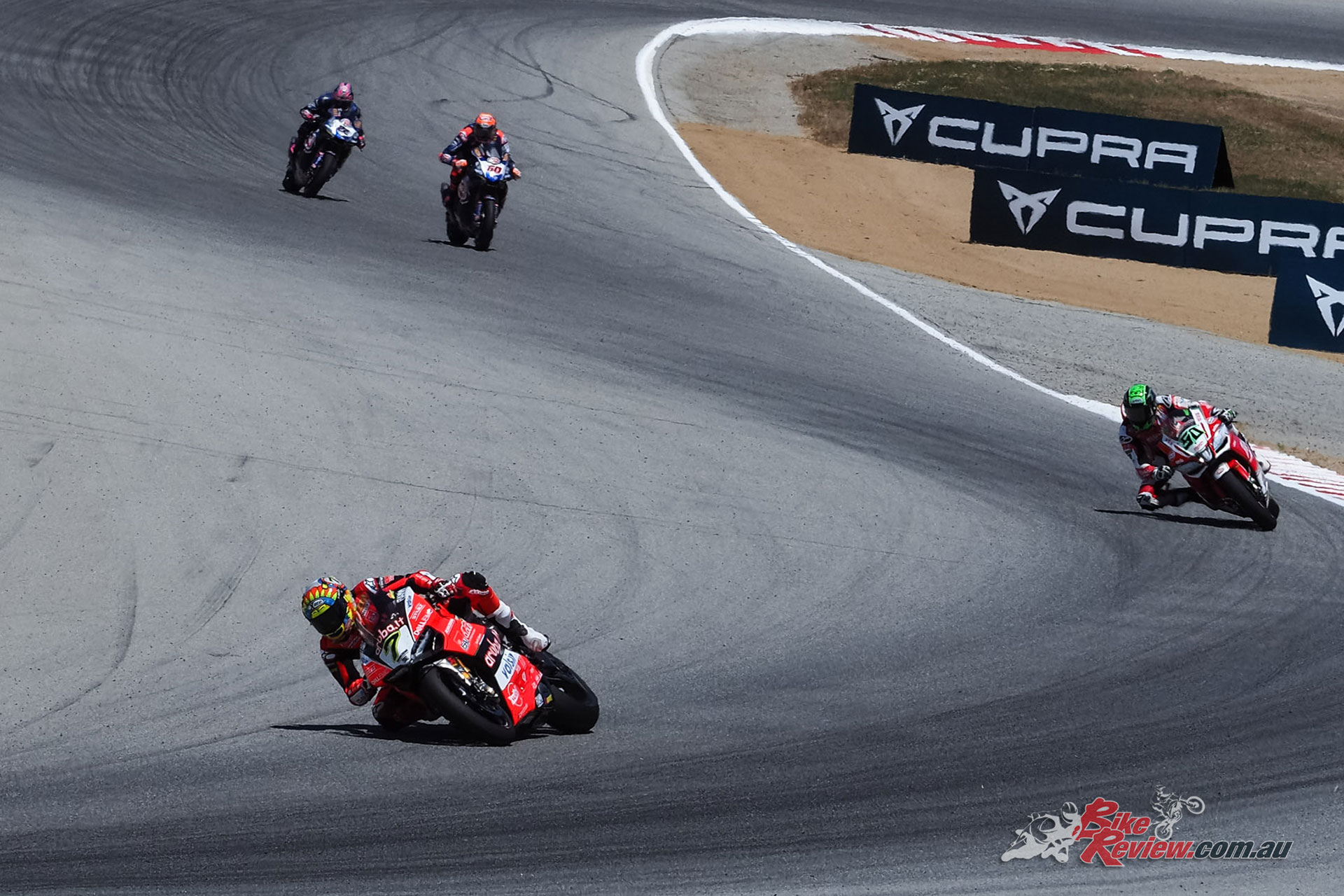 Behind the pair, Alex Lowes found his way quickly past Sykes into third, with the KRT rider falling slowly down the standings. The Lincolnshire rider has shown tremendous pace throughout the last three rounds, and following his maiden WorldSBK win with another podium – his first at Laguna Seca – spells excellent news for the Yamaha man going into tomorrow.

Eugene Laverty (Milwaukee Aprilia) repeated his best performance this season with an excellent fourth, making it four different machines in the top 4 positions, and highlighting how far the RSV4-RF has progressed in recent races. The Irishman will also have the bonus at starting from pole tomorrow, at a track where a front row can be a near-guarantee of success. 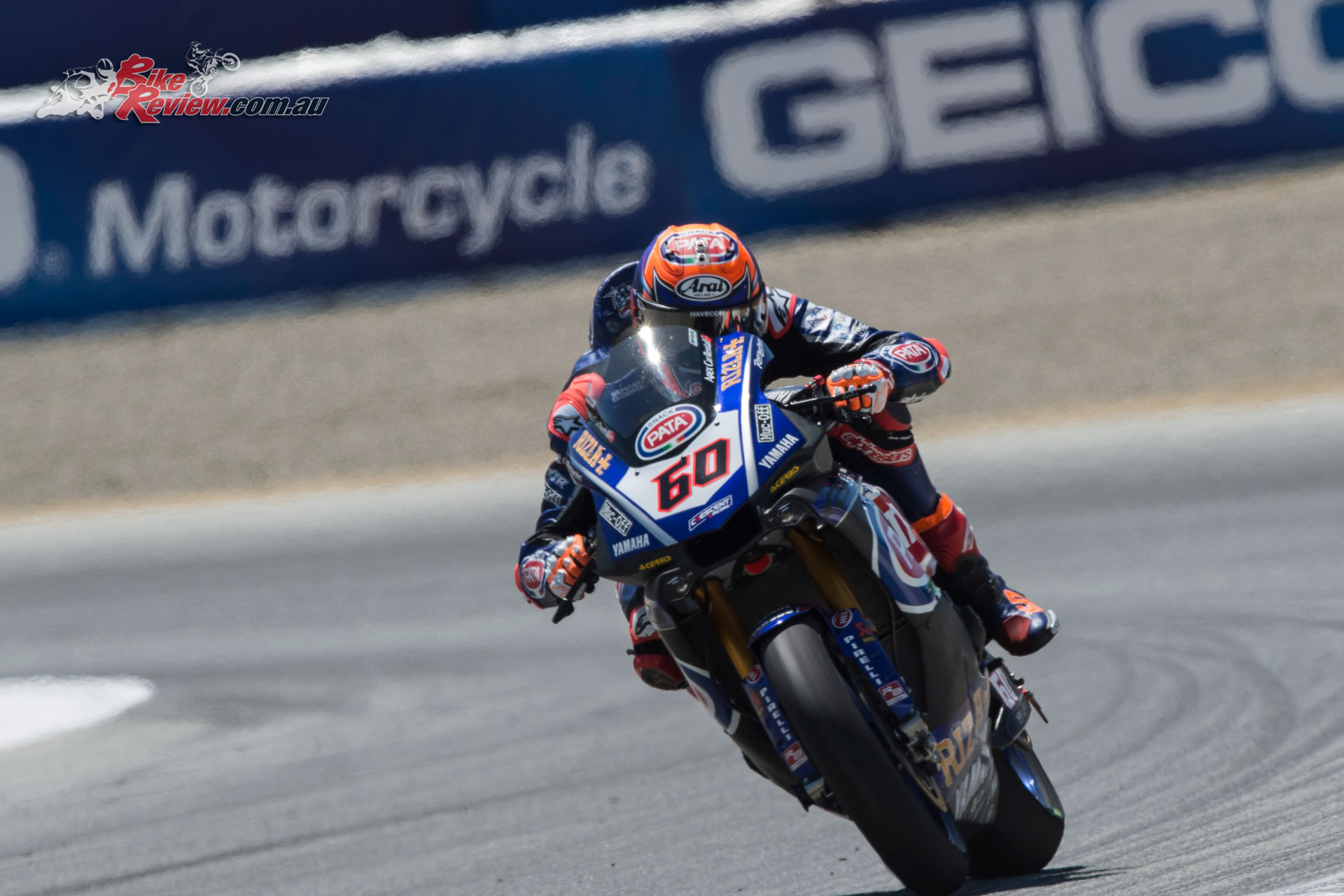 Marco Melandri (Aruba.it Racing – Ducati) bounced back from a disappointing qualifying session with fifth in Race 1, an admirable climb from the fourth row. He passed fellow Panigale R rider Xavi Fores (Barni Racing Team) in the final laps. The Spaniard, top independent rider in California, will nonetheless be pleased with his progressive return to form.

Much less comfortable during the race than through the earlier Superpole session, Tom Sykes ended his race successfully defending seventh place from Michael van der Mark (Pata Yamaha Official WorldSBK Team), who had to be content with eighth, in front of Jordi Torres (MV Agusta Reparto Corse) in ninth. 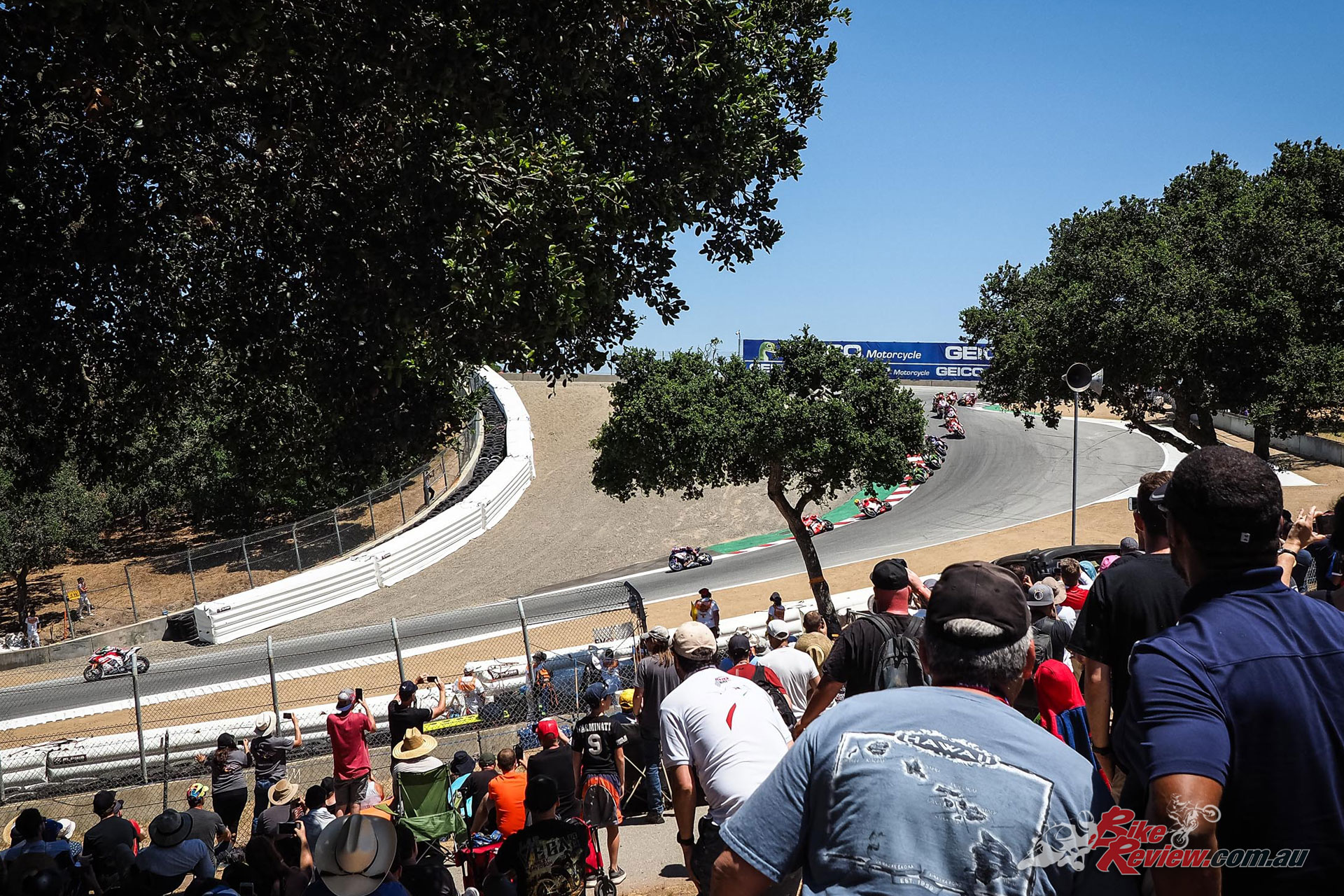 Scoring his best result in WorldSBK, Jake Gagne (Red Bull Honda World Superbike Team) finished his home race in tenth place to the delight of all the American fans at Laguna Seca.

Jonathan Rea (Kawasaki Racing Team) has taken his second win of the weekend at the WeatherTech Raceway Laguna Seca, becoming the most successful rider in MOTUL FIM Superbike World Championship history at the US racetrack in the process. 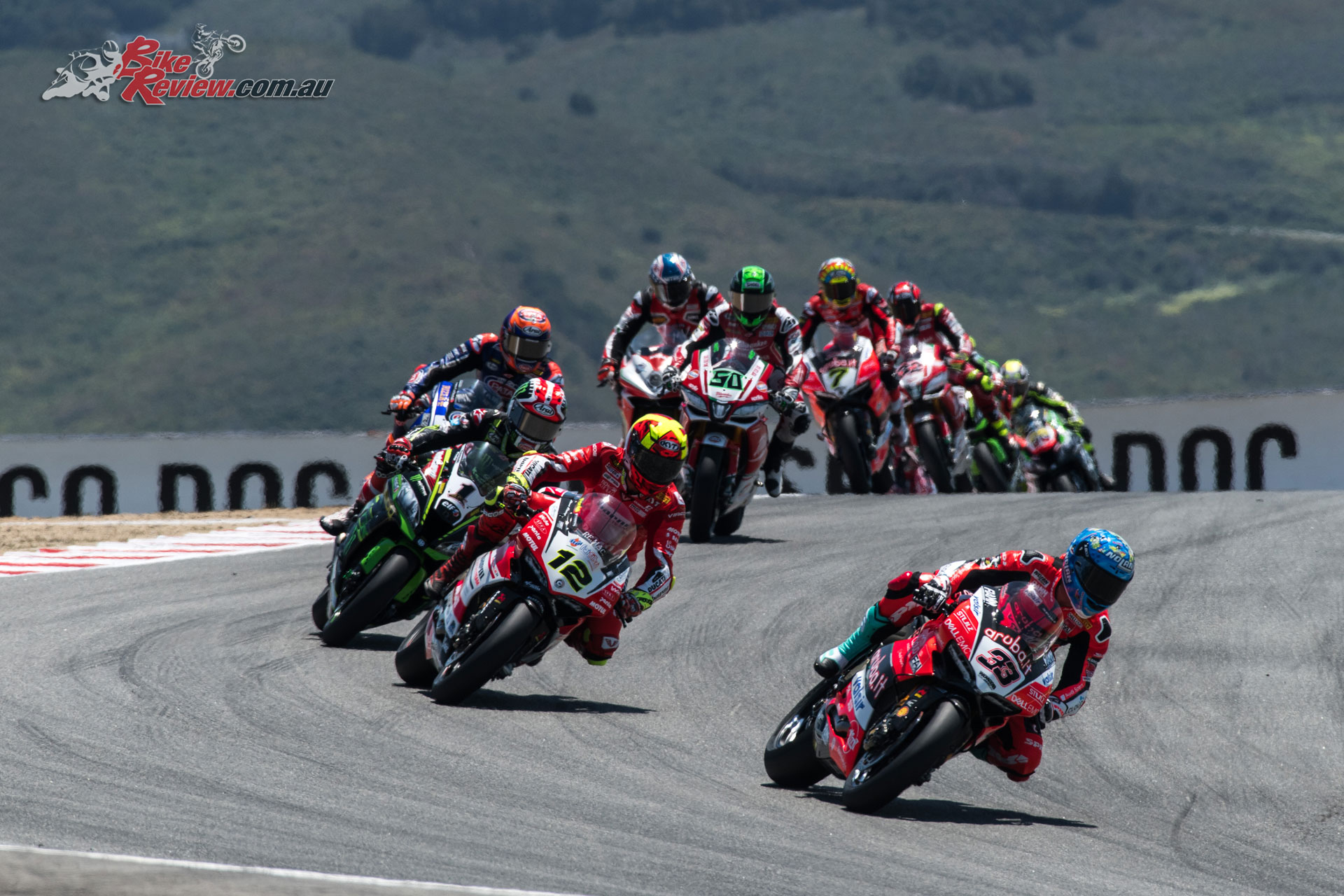 The Northern Irishman was again unstoppable in the GEICO US Round, flying to the lead inside eight laps despite having to start from the back of row three. Second went again to Chaz Davies (Aruba.it Racing – Ducati), with Eugene Laverty (Milwaukee Aprilia) completing the podium in third.

Rea wasted no time at the lights. By the end of lap one he had managed to climb from ninth on the grid to fifth; three spins around Laguna Seca later, he was already up to second and chasing race leader Laverty, at a pace of over one overtake per lap. Meanwhile, behind, Marco Melandri (Aruba.it Racing – Ducati) crashed out, the third time in the last seven races that the Italian has failed to score any points. 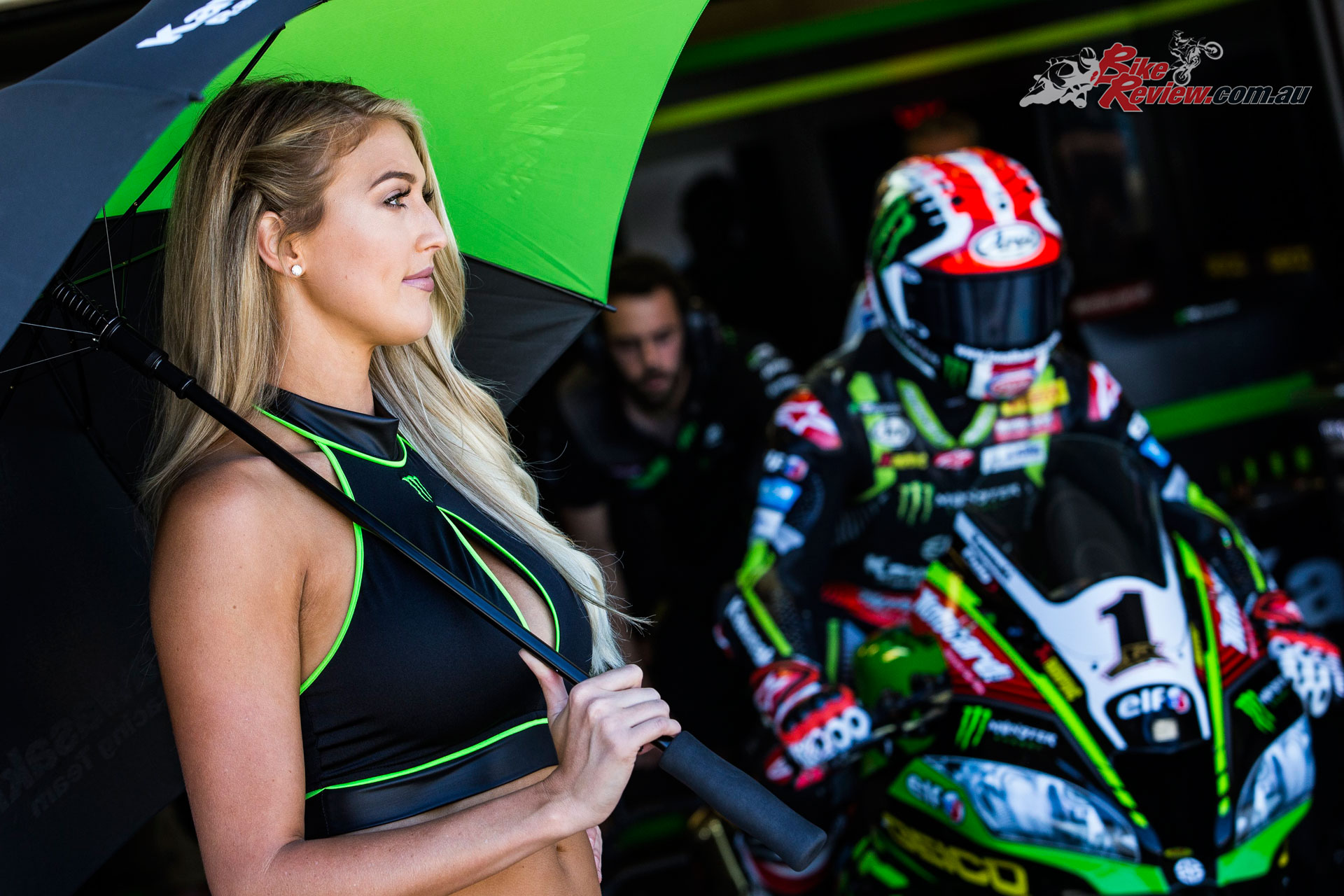 It didn’t take much longer for the Race 1 leader to pass Laverty either, picking off the Aprilia rider with ease through Lap 8. A similar story to yesterday: two thirds of the race left, an open track ahead, and an unbeatable race pace. When Rea finds his groove and is this confident, the three-time champion is second to no one. Even Davies, who performed another brilliant climb up the ranks and passed Laverty into second with eight laps to go, couldn’t close the gap and had to settle for second. 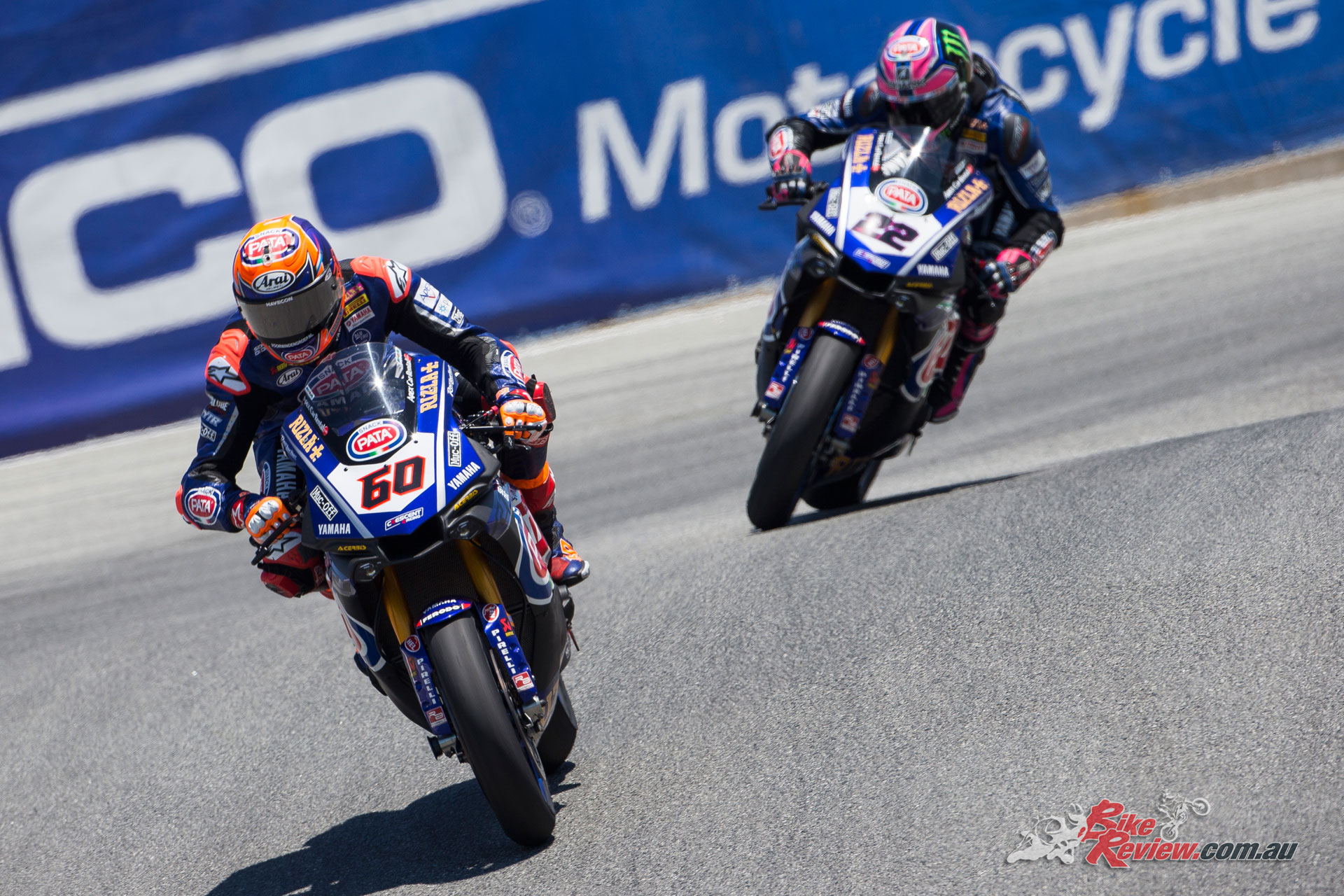 Just as on Saturday, however, there was plenty of action for the remaining rostrum place. Laverty, now in third, was quickly hunted down by the two Pata Yamaha riders. But the pair squabbled amongst themselves just enough laps for the Irishman to keep both a second away and clinch his first podium of the 2018 campaign, also a first since Sepang 2014. It’s been a long and tough journey for Laverty since he returned to the WorldSBK paddock last season, but the hard work is slowly but surely paying off. 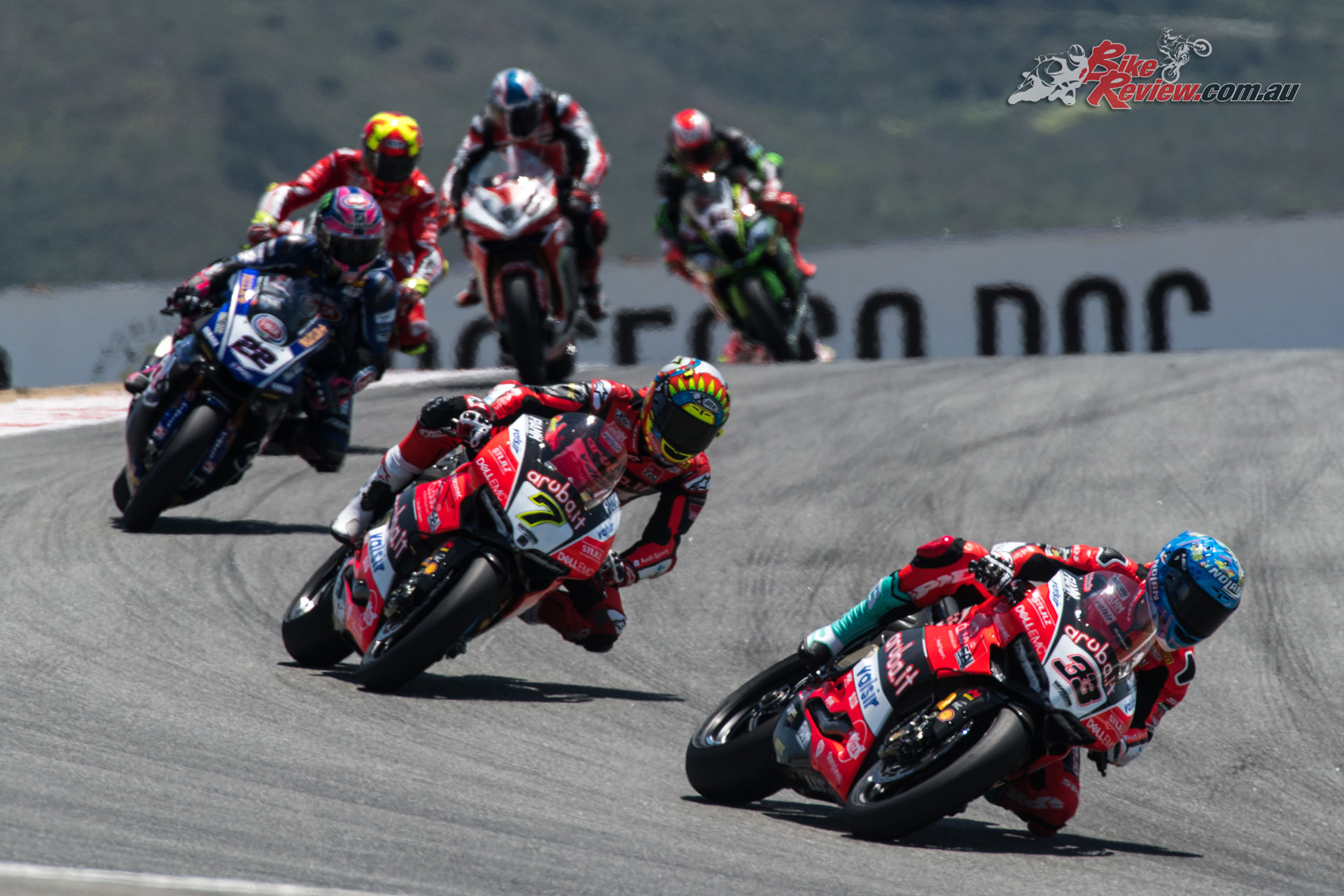 The battle between Round 6 and 7’s race winners, van der Mark and Lowes, saw the Brit finally emerge victorious with two laps to go thanks to a brave pass in the run-up to the Corkscrew. A bit of magic from the Lincolnshire rider to close the gap with his teammate in the standings to just 32 points. Van der Mark meanwhile couldn’t make the best of a fantastic start, which saw the Dutchman rise to second at Turn 1, and crossed the line in fifth. 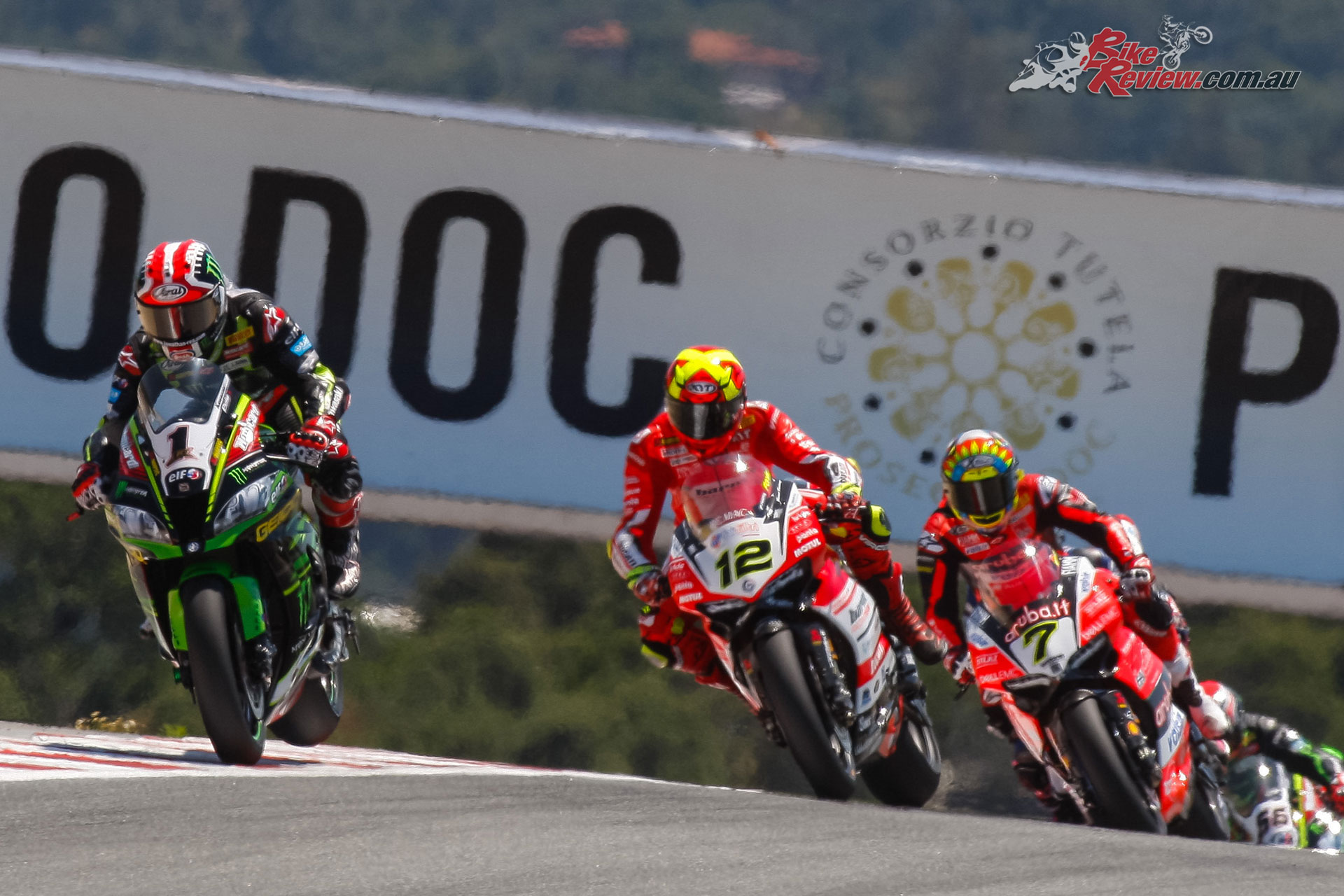 Xavi Fores (Barni Racing Team) repeated his Race 1 performance with sixth at the flag, a sign that the Spaniard is building back his form after two forgettable rounds. Behind him was fellow Spaniard Jordi Torres (MV Agusta Reparto Corse) in seventh, ahead of Tom Sykes (Kawasaki Racing Team WorldSBK) in eighth. Sykes is a three-time winner at Laguna Seca, but on Sunday he found himself collapsing down the ranks from the start and it never quite worked out throughout the 25 laps for the Kawasaki rider, closing a disappointing weekend. 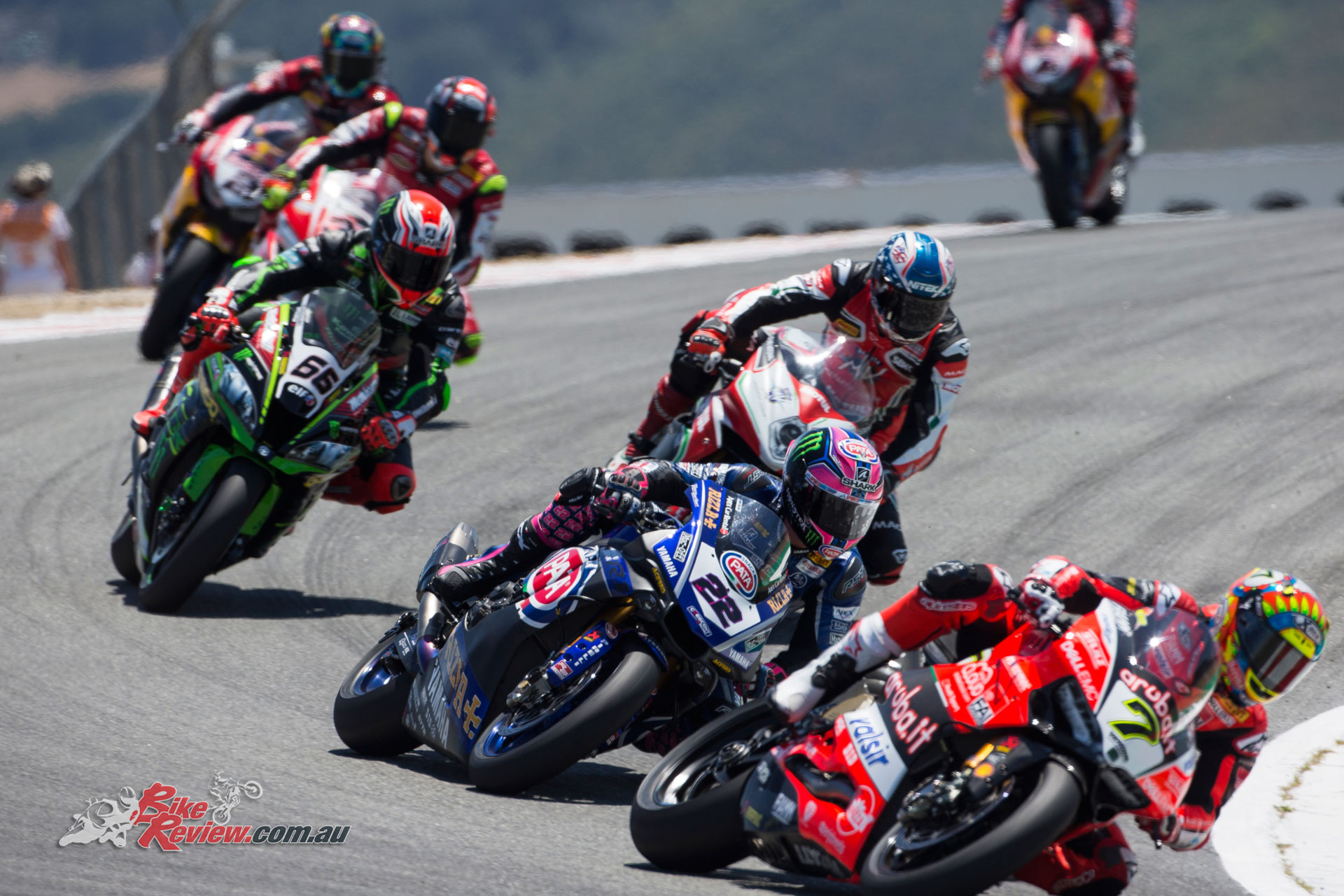 Jake Gagne (Red Bull Honda World Superbike Team) went one better than on Saturday, crossing the line in ninth and taking his personal best result in WorldSBK. A fantastic weekend at home for the Californian, who crossed the line ahead of Loris Baz (GULF Althea BMW Racing Team) in tenth and Leandro Mercado (Orelac Racing VerdNatura).

A special mention for Karel Hanika (Guandalini Racing), who crossed the line in a promising 14th, scoring points in both races at Laguna Seca on his WorldSBK debut.

WorldSBK is back in two weeks at Italy’s Misano (July 6-8) for the last stop before the summer break.

WorldSBK Championship results after Round 8