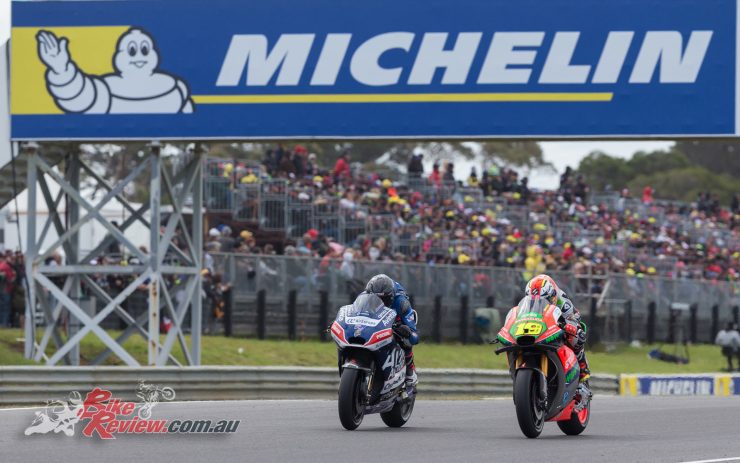 Mike Jones takes his first MotoGP points at the Phillip Island 2016 round.

Moto3 Wild Card Matt Barton has finished what can be described as an unbelievable race finish in his second ever MotoGP, Moto3 ride at the 2016 Michelin Australian Motorcycle Grand Prix.

Barton today got a taste of what the road show was all about, with still 18 laps to go the Moto3 race was red flagged after a multiple person crash at MG corner, with all riders returning to the pits.

Barton who was sitting in 25th position at the time in front of Aron Canet and Binder entered the pits preparing to once again suit up for the second leg of the race, reduced to only 10 laps.

When the race restarted Barton had increased his position on the grid due to the enforcement of a progressive grid. As he launched off the grid for the second leg of the race Barton got a great start.

Staying consistent throughout the remainder of the race and pushing to drive down his times, he bought his machine home crossing the finish line with the wave of the chequered flag on the lead lap.

A vast improvement from last year’s DNF, Barton finished in 20th position after a grueling and much anticipated race.

The race finish marking the end to Barton’s weekend, the young hopeful can walk away smiling battling through engine problems and some horrible conditions in the lead up to today’s events.

Barton shared today that he is proud of his finish and that he found comfort in knowing he had similar corner speed to World Champion Brad Binder through warm up.

“I would like to think that we lost speed to due to just straight line speed, because we found in this morning’s warm up we had the corner speed on them, we were with them when we were with the pack.

“It was pretty comforting to be able to stick to the rear wheel of riders, it gave me good confidence.

“In the re-start it was just the speed in the initial first part of the straight. I managed to catch up to them a little bit in turn one and two, and then along the back straight they pulled to much of a bike length.

“It was a good race and I finished 20th which is always good. I was the second wild card to ever finish on the lead lap. It was a pretty awesome weekend and I am really proud,” he finished. 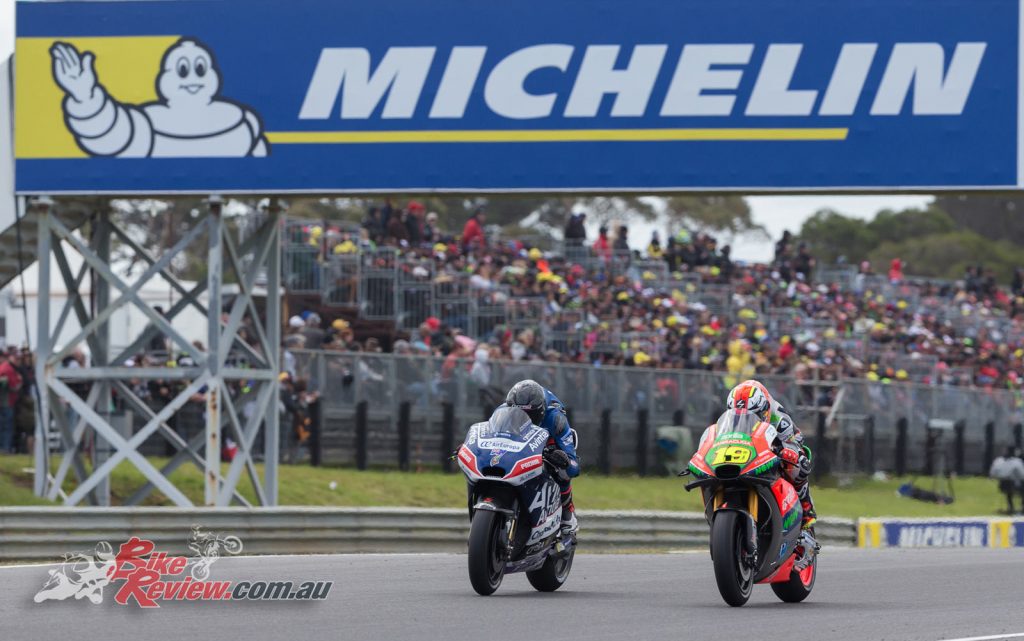 Mike Jones takes his first MotoGP points at the Phillip Island 2016 round.

After Miller cemented fifth on grid in yesterday’s qualifying, and Jones qualifying 18th, this afternoon’s race start was tight and hotly anticipated as crowds lined the fence three rows deep, the Aussie flag waving for both riders.

For Mike Jones, the media grid didn’t help lowering the anticipation mentioning to the interviewer he was ‘extremely nervous’ but as soon as the red light went out he went in to race mode getting a fantastic start off the line.

Cementing a position in front of Miller’s team mate Tito Rabat, Jones rode Phillip Island circuit chasing a tightly packed bunch in front of him. With every lap Jones closed the gap, sitting on the back of the battling three.

Almost ready to make a pass, unfortunately a small mistake saw him lose valuable time slipping behind but not in positions.

As the race played out in front of him Jones kept his head down and rode to a strong race finish to finally bring home his Ducati in 15th position. Jones has now collected his first MotoGP World Championship point for the 2016 season, in what was a huge milestone for the young lad.

For Miller an extensive and drawn out battle began from the moment bikes left the grid to the moment they crossed the finish line, battling with the likes of Scott Redding and Nicky Hayden.

As the race drew to a close and with multiple position changes a move in to Honda saw Miller overtake Hayden, with Hayden crashing out, only to resume in last position to finish the race.

Jones shared immediately after his 120.096-kilometre race that he is amazed that he has gotten a Championship point in both the World Superbike Championship and now MotoGP, expressing his appreciation for joining the team both here and in Japan.

“The guys at Ducati are very pleased with the approach that I’m taking and I’m just grateful that they’ve given me the opportunity to compete in the MotoGP,” he shared.

“It’s quite amazing because I raced in the World Superbikes at the beginning of this year and got a point there and now I got a point in the same year at MotoGP.

“I had the lap timer on the dash and I was running relatively consistent lap times so I’m very happy with that,” Jones finished.

For Australian Moto2 rider Remy Gardner, his day didn’t finish the way he expected after a crash on the first lap saw the rider drop to last position after re-joining the race. Despite re-joining the race after his crash Gardner was forced to retire after only 13 of 25 laps.

After three great races on Australian shores MotoGP regulars Jack Miller and Remy Gardner will now fly to Malaysia to contest the MotoGP while Jones will remain in Australia eager to get his 2017 plans cemented.