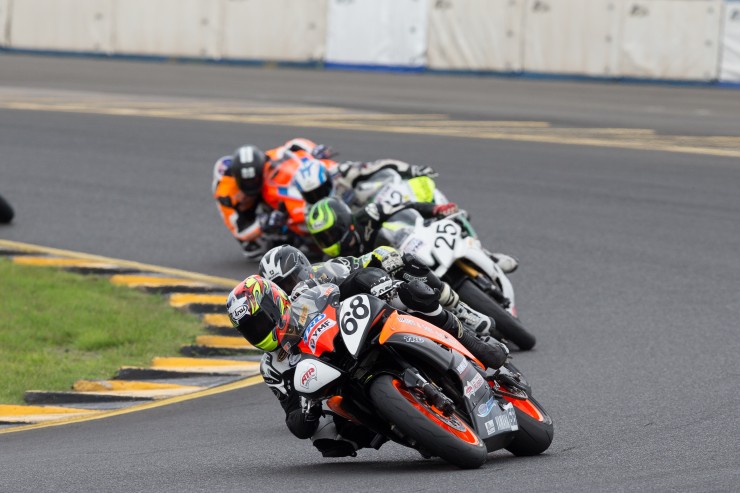 With the stands filling throughout the day at Sydney Motorsport Park, the Motul Supersport class put on a fantastic show for the eager spectators, at Round 3 of the 2016 Yamaha Motor Finance Australia Superbike Championship presented but Motul Pirelli over the weekend.

There was a certain energy in the air as the media grid circulated around the Motul Superport competitors ahead of race one yesterday, and when the class launched off for their sighting lap, pole position holder Cambridge Olivier, crashed out and was unable to start race one.

When bikes eventually left the grid, Graffiti Alley Racing’s Troy Guenther got to an impeccable start, and after a brief challenge by Cube Racing’s Callum Spriggs, Guenther began to lead the pack. However just as racing had got underway, an incident at turn two quickly saw the race red-flagged with three riders involved in a collision. 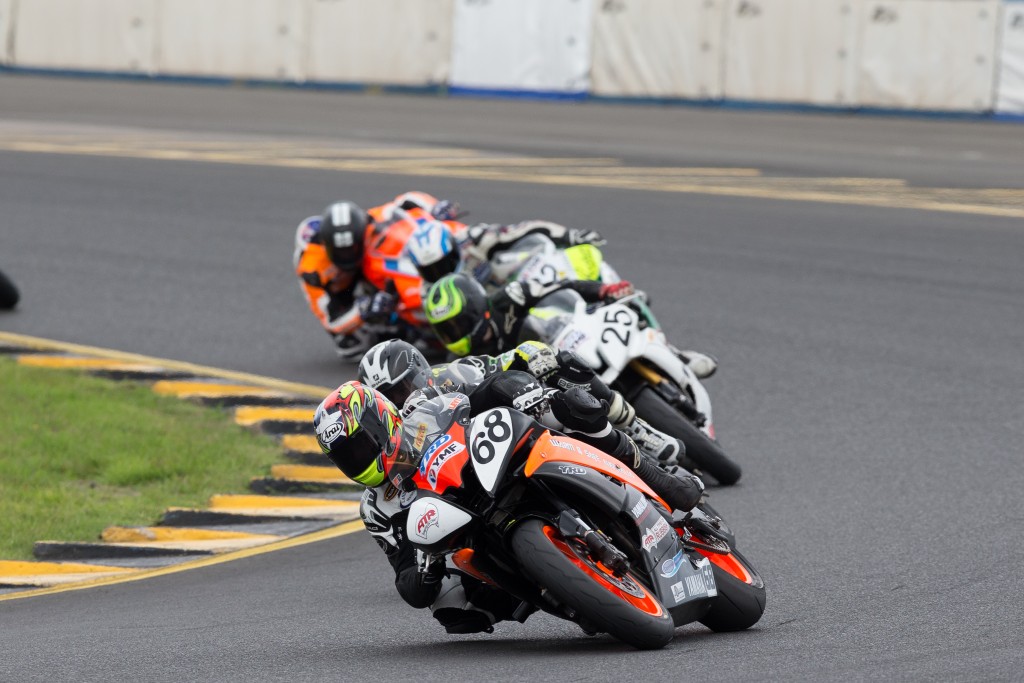 With the race reduced to 10 laps, and pole position vacant, only Guenther and Spriggs started from the front row of the grid. And just as spectators thought the race was starting, rain showers forced the race re-start to be delayed.

When racing finally got underway, it was Guenther who got to another flawless start, and after one lap of the 10-lap journey, it was Geunther who led from JNL Racing’s Luke Mitchell and Clarke.

But it wasn’t long before Clarke who had something to prove, managed to push his Kawasaki machine to the limits, snatching up two positions to take the race lead ahead of Mitchell, Spriggs, and Yamaha mounted Mitch Levy – while Guenther who had made a slight mistake, slipped down to fifth position.

By lap four, Levy was able to move on up to the rear tyre of Spriggs, and snatch away third position as they continued to circulate around the technical track. And by the start of the fifth lap, Mitchell decided it was his turn to take the lead, making the pass on Clarke’s Kawasaki, while Levy also moved past Clarke in to second position, relegating the round two winner to third.

At the half way point in race one Levy was determined to leave no stone unturned, applying the pressure on Mitchell for the top spot and then executing a pass to move in to the race lead.

With the last lap board in the distance, Spriggs also looked to move in to a final podium position, passing Clarke for third place, as the group headed onto the straight for the second last time.

The final dash to the finish line saw more action than anticipated, but it was Levy on his Yamaha machine who crossed the line in first, while Spriggs proved the power of his Cube Racing Kawasaki to wrap up race one in second, while Mitchell concluded race one in third.

Round 2 winner Clarke crossed the finish line fourth, followed by Guenther and Guiseppe Scarcella in fifth and sixth places respectively. Ben Blyth wrapped up race one in seventh, followed by Thomas Bryden, Robbie Menzies and Chris Quinn who all rounded out the top 10 finishing positions.

With rain falling constantly from the lunch break, the second race for the Motul Supersport competitors was declared wet, and with limited testing in similar conditions the tension was high on the Supersport grid.

It was Clarke who put his best foot forward in the wet, getting a perfect jump off the start and making up an incredible five positions, to move straight into the lead, however, with not even one lap in the books there was a repeat of race one events, as the race was red-flagged.

When the race was restarted, Clarke once again launched in to the race lead, and with a reduction to 10 laps for the Motul Supersport class, competitors went bar to bar to get the job done.

After two laps, the running order was Clarke, followed by Suzuki mounted Kane Burns, while Spriggs slotted in to third place. Robbie Menzies, and Mitch Levy had put themselves in to fourth and fifth positions, ahead of Ben Blyth and Luke Mitchell.

At the half way point in the race, Graffiti Alley Racing’s Guenther was missing from the front pack of riders, sitting in 13th position and desperately trying to make passes on his Supersport competitors to claw back positions.

However, in a turn of events that no one could have predicted, Suzuki mounted Burns crashed in turn 10, the race immediately red-flagged. Race two was then declared with positions awarded at the lap six mark.

So with the race declared, Banham WA Racing’s Clarke aboard his Kawasaki claimed the final race win. Second place was awarded to Spriggs, while the final position on the podium was taken by Menzies.

Levy and Quinn rounded out the final Motul Supersport race in fourth and fifth, while sixth place was Blyth. Olivier finished in seventh position followed by Giuseppe Scarcella, Ted Collins, and Troy Guenther.

“I am stoked to have taken out the round win, I am a bit disappointed I couldn’t push more for the lead in the second race, but the conditions were tough, and we didn’t quite have a great wet set up,” Levy stated.

“The pace was definitely fast this weekend, probably the best race weekend of my life really, it was unreal to take the win and battle with all the boys.

“Heading into to the next round I am hoping to do more test days and just build myself and my bike together, and improve to see some great results hopefully at round four,” Levy concluded.

For a full list of results from Round 3 of the Yamaha Motor Finance Australian Superbike Championship presented by Motul Pirelli, head to www.computime.com.au