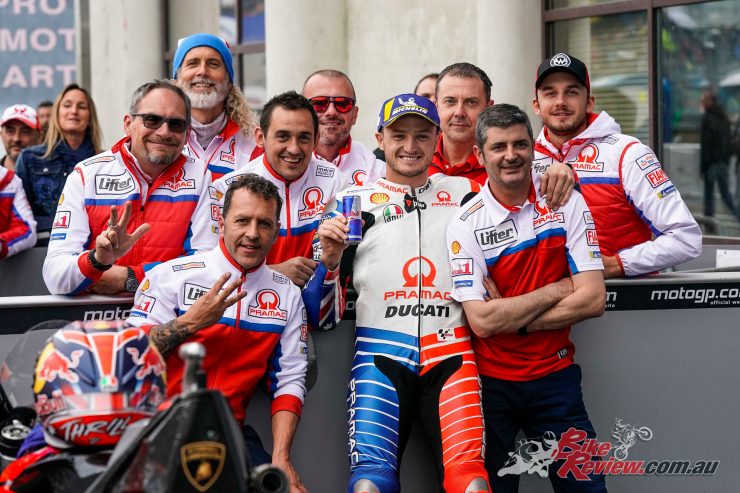 Jack Miller on the front row for 2019 French MotoGP 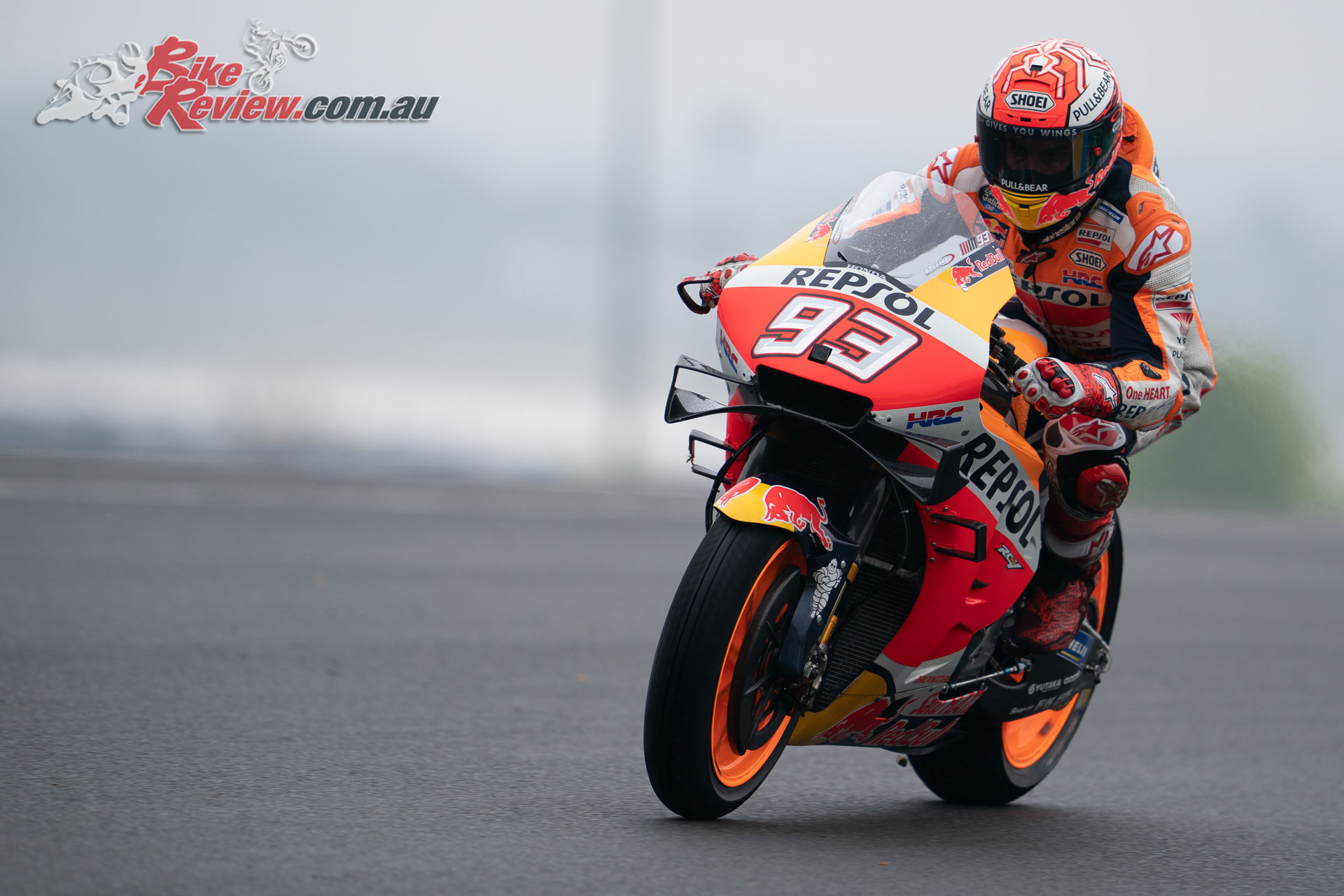 An ecstatic Marc Marquez sharing, “Today was one of those days! The conditions meant you didn’t know if a slick or a wet tyre would be best with the light rain, it was really difficult. In Qualifying we knew we had to push on the first lap when there was the least water on track. Then with more water on track it got more difficult. I’m happy with this pole because it was a day where you could easily start from the back if you weren’t careful. Now we see what the weather does tomorrow!” 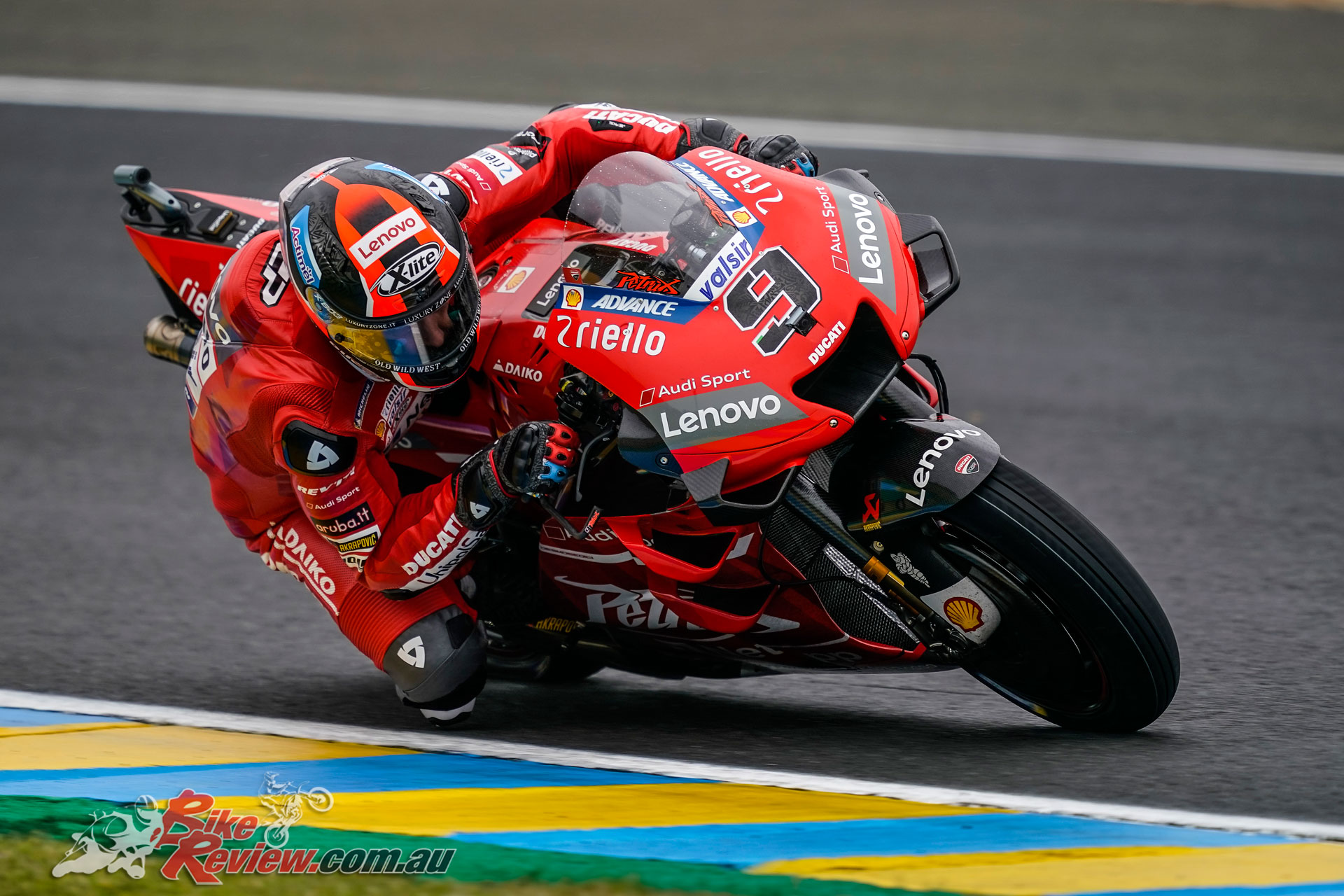 Danilo Petrucci saying, “I’m very happy because we finally managed to show our potential also in qualifying and tomorrow we’ll start from a good position on the grid. Together with my team, we adopted what turned out to be a good strategy, pushing hard early on in the session with a medium rear tyre, since track conditions became progressively worse as the time passed. At any rate, it wasn’t easy to do a quick lap time: the rain wasn’t intense enough for the tyres to work perfectly, so it was particularly difficult to find the limit in terms of grip, as the many crashes seem to show. Today we did a good job, but the race is tomorrow so we need to stay 100 percent focused.” 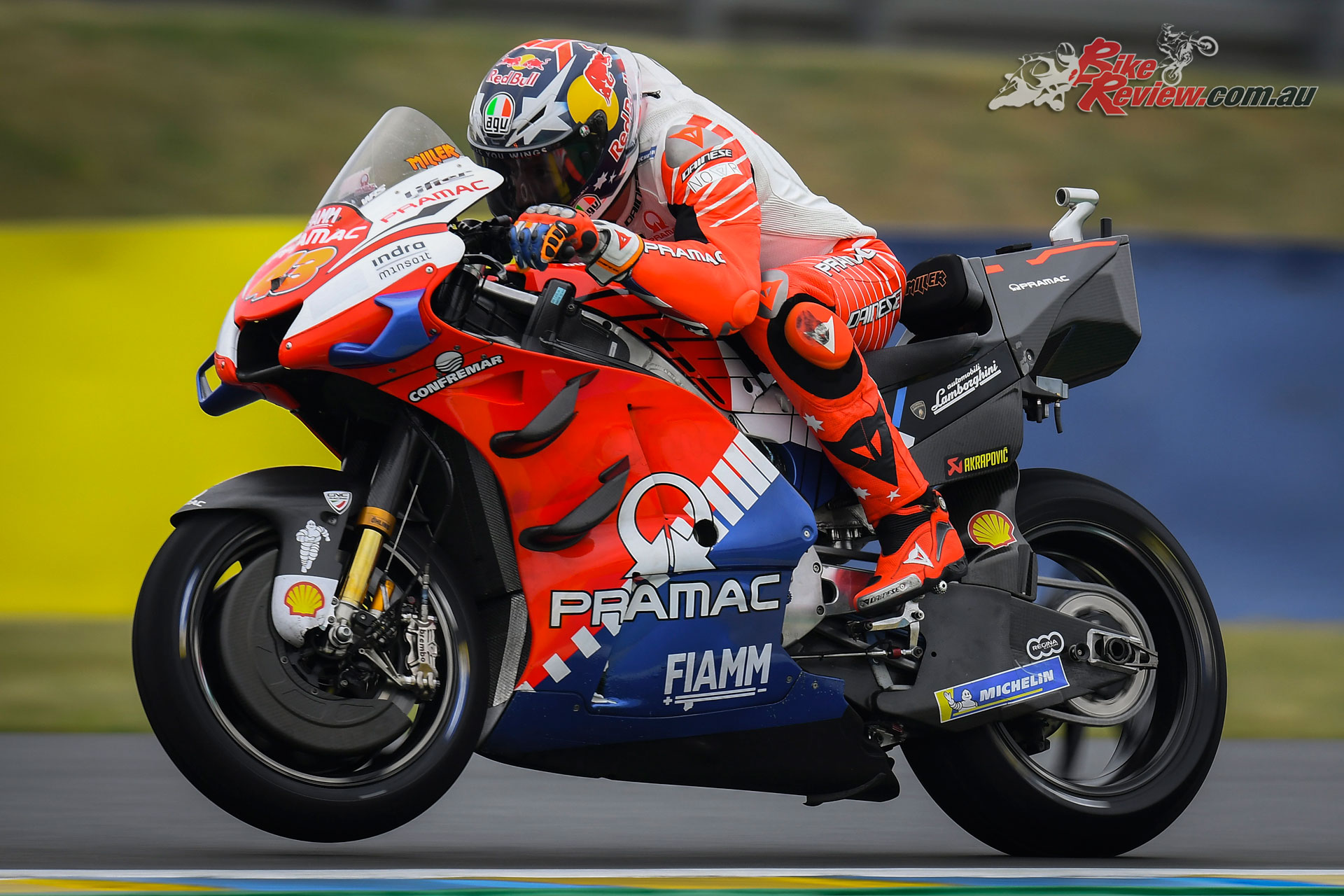 Jack Miller adding, “I’m happy with the way things went today. The feeling with the bike is very good and we are doing a great job. I’m just sorry with the team about the crash in Q2 but I was pushing hard. We are fast and I am sure I am competitive in all conditions”.

Question marks over which tyres to go with were obvious ahead of the green light and as the riders ventured out, only three riders gambled on slick tyres: Valentino Rossi, teammate Maverick Viñales and fellow Yamaha man Fabio Quartararo. But it didn’t pay off as the rain started to fall slightly heavier at Le Mans, so the M1 trio came straight back into pitlane to switch bikes.

Meanwhile, the riders who had gone for wets were busy getting their first laptimes on the board, and it was Marquez who went to the top of the standings after Petrucci and Miller had taken turns to go P1. The Spaniard’s advantage was nearly 0.4 seconds as he set off on another hot lap but at Turn 6 it came to an abrupt halt as the Repsol Honda rider slid out, trying his best to save it but it wasn’t to be this time around. Miller would also later crash, as would a fair more more. 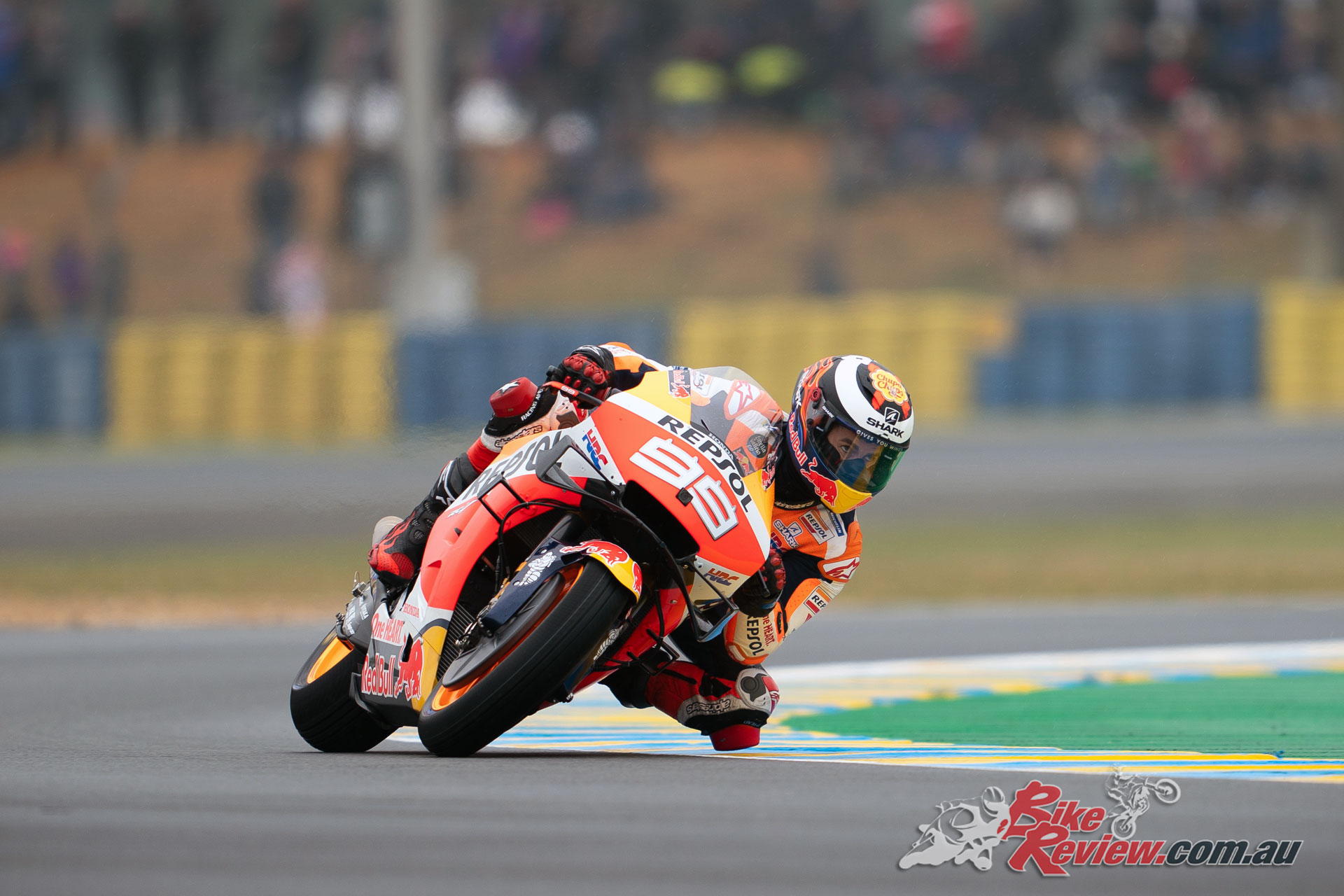 Conditions were getting ever so slightly worse as the rain continued to fall, and Q1 graduate Rossi was now out on wet tyres, gradually climbing his way up the timing screens as the field struggled to improve on their personal best laps. Marquez stayed out after his crash but the Championship leader wasn’t able to find any more time, with Rossi one of the only riders to find some; the 40-year-old jumping up to fifth on his final flying lap and set to line up alongside Dovizioso.

Closing out the second row is Franco Morbidelli, who was the last rider within a second of Marquez, ahead of Takaaki Nakagami, who heads row three despite suffering his first crash of the season. He has Jorge Lorenzo alongside him as the number 99 had his best qualifying yet on the Honda. The six-time Le Mans winner was one who, like Rossi, was able to improve despite the worsening conditions. Aleix Espargaro was next up in P9 and that was another notable result; the Noale factory’s best of the season so far. 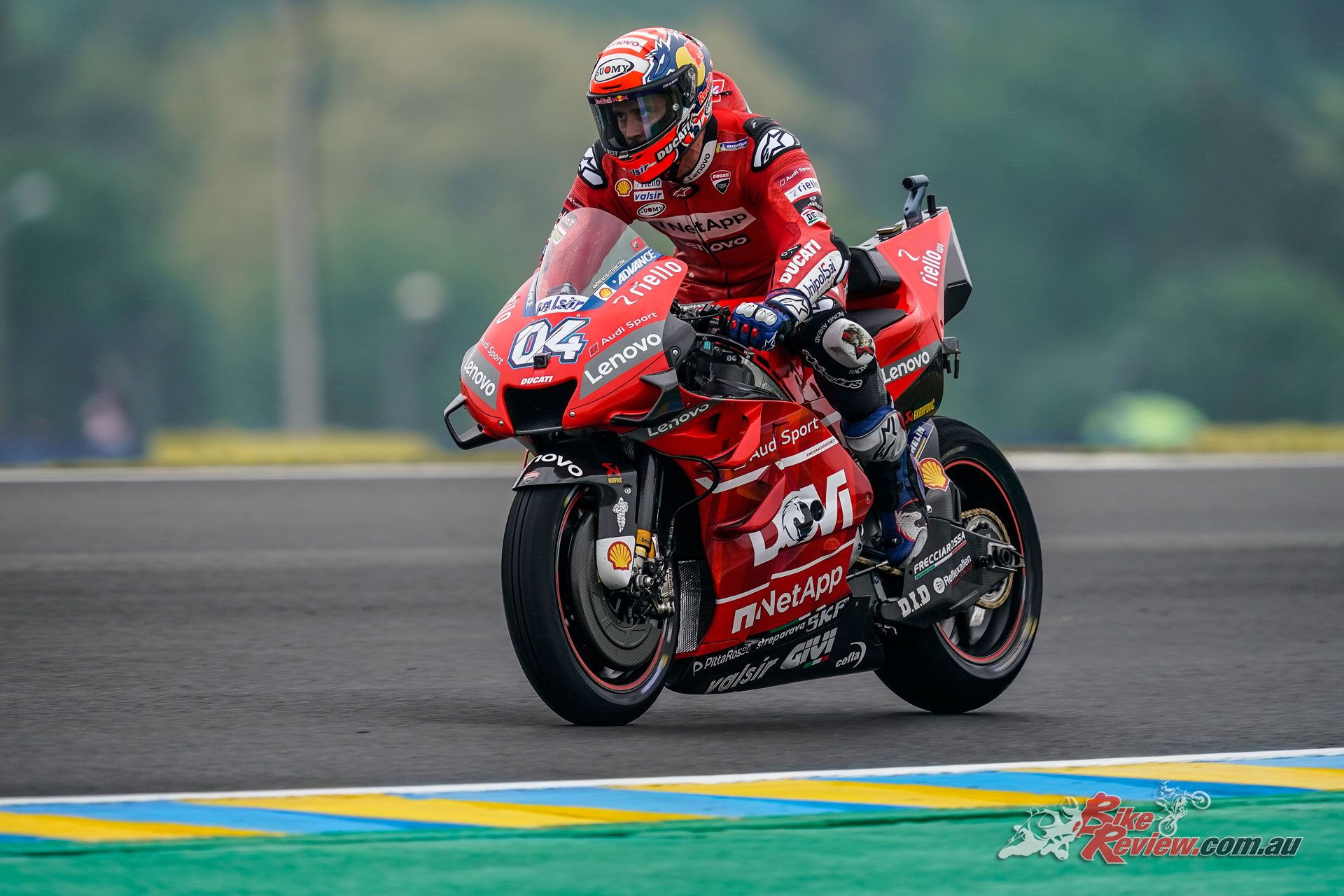 Home hero Fabio Quartararo, meanwhile, looked disappointed with P10, but it’s a impressive result for the rookie as he had to get very quickly accustomed to a MotoGP machine in the wet. The Frenchman will start ahead of Viñales too after a disaster for the Spaniard, who had looked immensely strong in all conditions throughout the weekend. Pol Espargaro’s crash means he’ll start 12th on the KTM after failing to set a time, although it’s a step up from last season for the Austrian marque.

A notable name missing from the list? Alex Rins (Team Suzuki Ecstar). Despite good speed in a wet FP4, the Spaniard struggled in qualifying and will start the French GP down in P19. Can he pull his usual race day pace out the bag and slice back to the front? All eyes will be pointing to the skies tomorrow to see what the weather will bring but whatever the conditions, it looks set to be a French phenomenon in Le Mans. Don’t miss the premier class race at 14:00 local time (GMT+2). 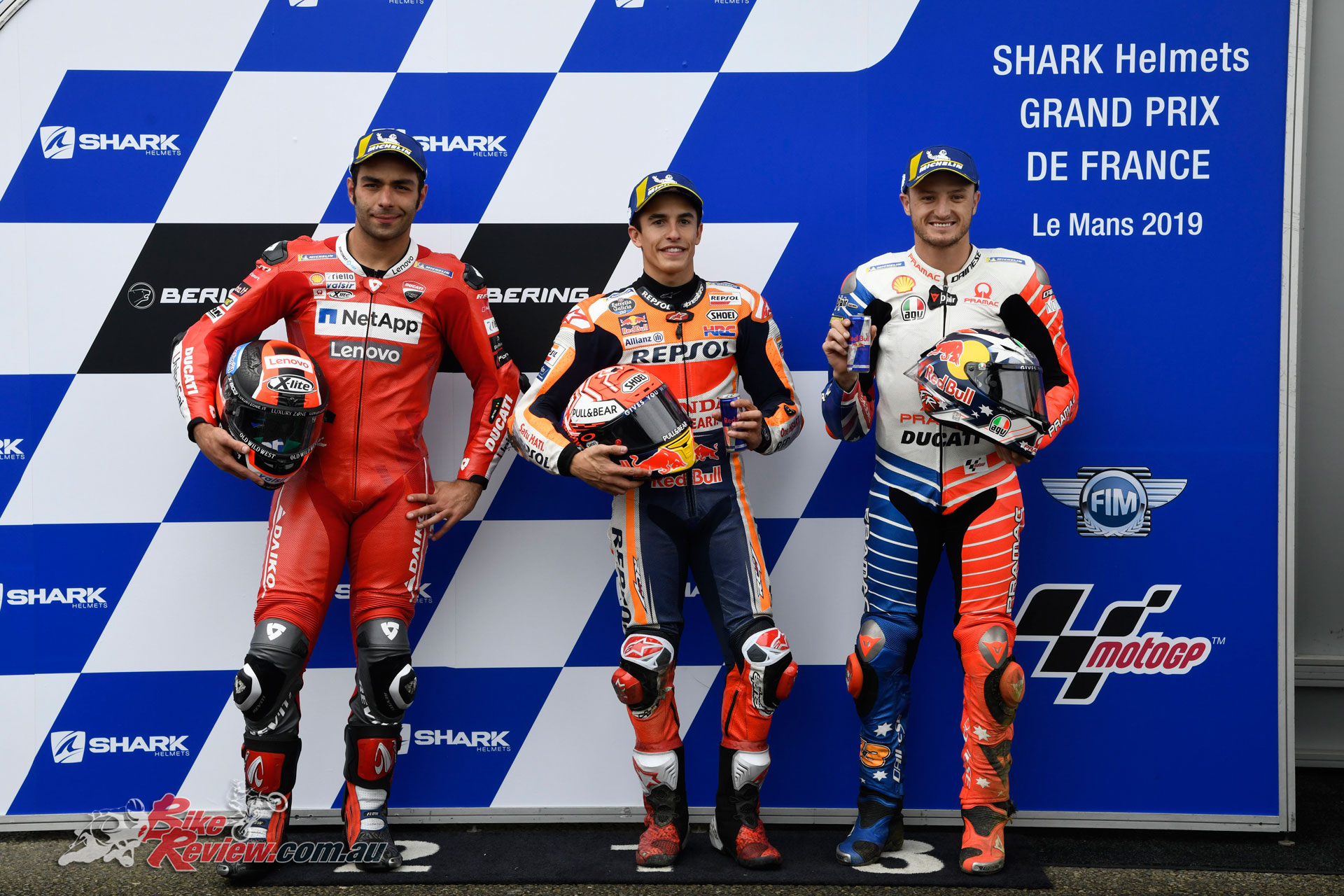 Moto2: Navarro beats Lüthi to pole after both go from Q1 to front row

After edging through Q1 by just 0.012, Jorge Navarro has taken his second consecutive pole position of the season to head fellow Q1 graduate Tom Lüthi at the Shark Helmets Grand Prix de France, with Alex Marquez joining the duo on the front row in third. Like in Moto3, the top two made a little history. 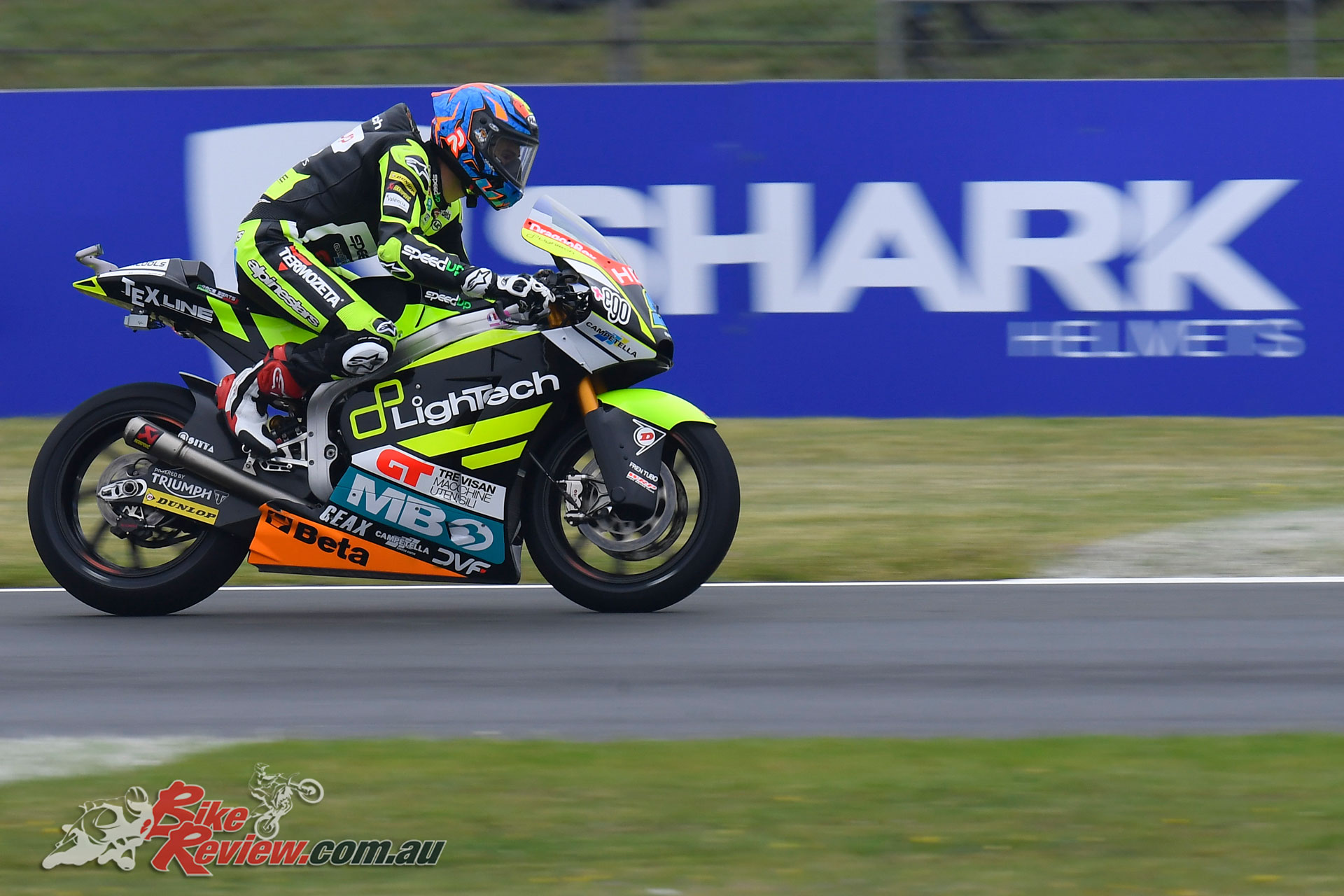 Damp and tricky conditions greeted the field in Q2 and it was Lüthi who set the pace in the early stages; the Swiss rider dialled in from a 15-minute Q1 session. Navarro was also up there alongside another rider who progressed from Q1 – Brit Jake Dixon, with Marquez going well in the early stages too.

However, it was far from a smooth ride for the top two in qualifying as both then crashed. Lüthi hit the deck at the notoriously difficult Turn 3, while Navarro went down just after fourth-place Mattia Pasini had gone down in front of him at Turn 8. All three riders were ok and in the end, none ended up threatened as they watched the rest of the field push on from the sidelines. Only Marquez was within a little over half a second, and he remained third, with Pasini also not overtaken despite his crash and the impressive Italian taking P4.

Xavi Vierge will launch from fifth for the French GP after a solid Q2, with Andrea Locatelli continuing his good weekend to earn his best qualifying position since starting seventh at last season’s Dutch GP. Championship leader Lorenzo Baldassarri spearheads the third row of the grid in seventh after improving his time in the latter stages, with Brad Binder and Q1 graduate Lukas Tulovic also improving their times on their final flying laps to earn third row starts. This is Tulovic’s first top 20 start in the premier class; an impressive showing in the wet from the German rookie.

Marcel Schrötter completes the top ten in qualifying as the latter stages bumped Dixon down to P11 although the rookie’s Q1 time, if replicated, would have been enough to put the 23-year-old on the front row. Nevertheless, a great personal best qualifying and a top-notch return to action for the number 96 rider after missing the Americas and Spanish GPs through injury. 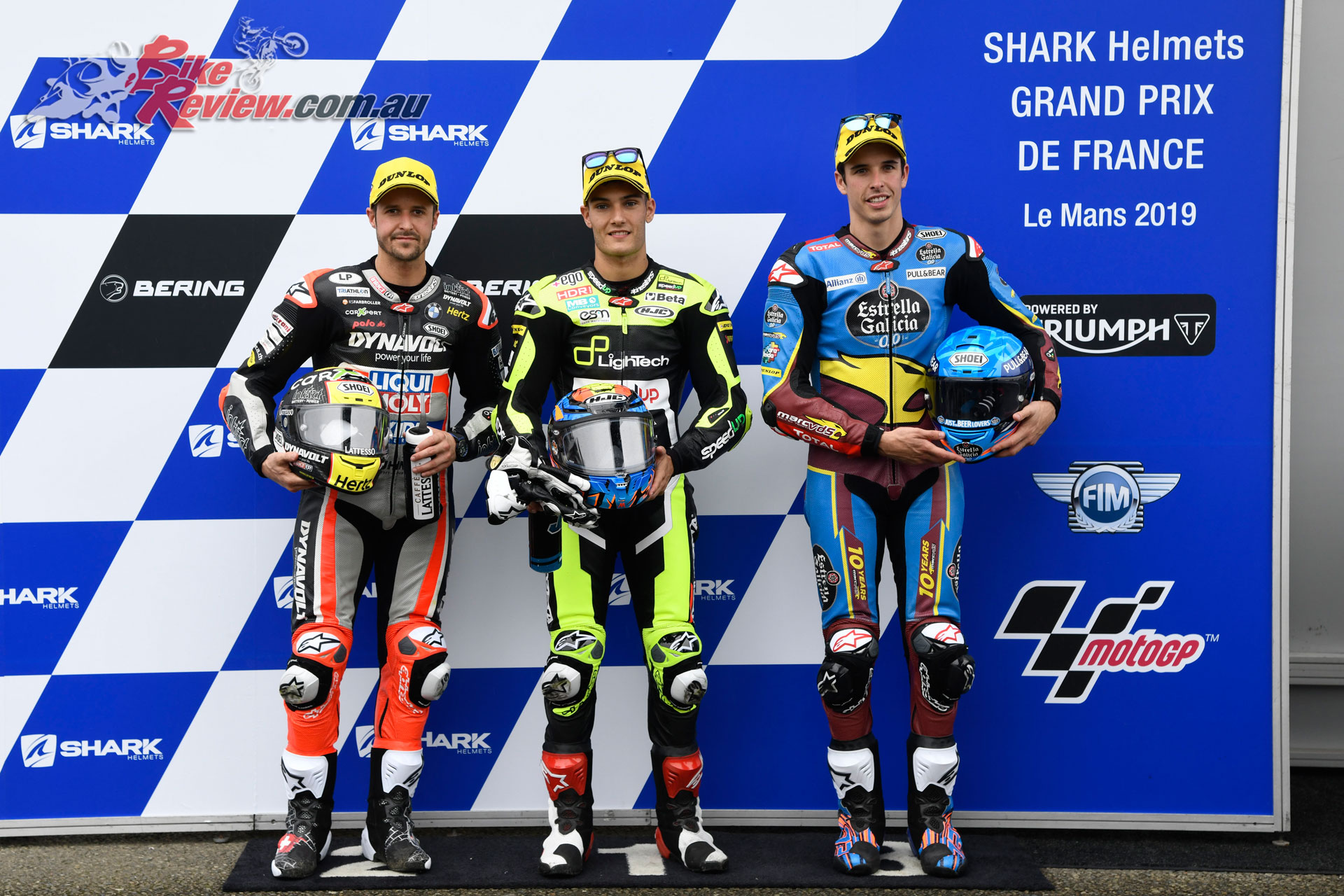 Since the introduction of the format, it hadn’t been done until a stellar day for the Scotsman at Le Mans
Petronas Sprinta Racing’s John McPhee made a little history at the Shark Helmets Grand Prix de France, becoming the first rider to progress from Q1 to then go on to take pole position in Moto3. It’s his first pole position since Argentina 2017 – although he started from the front at Mugello the same year – and he’s joined on the front row by Tony Arbolino and Friday’s fastest man, impressive rookie Ai Ogura. 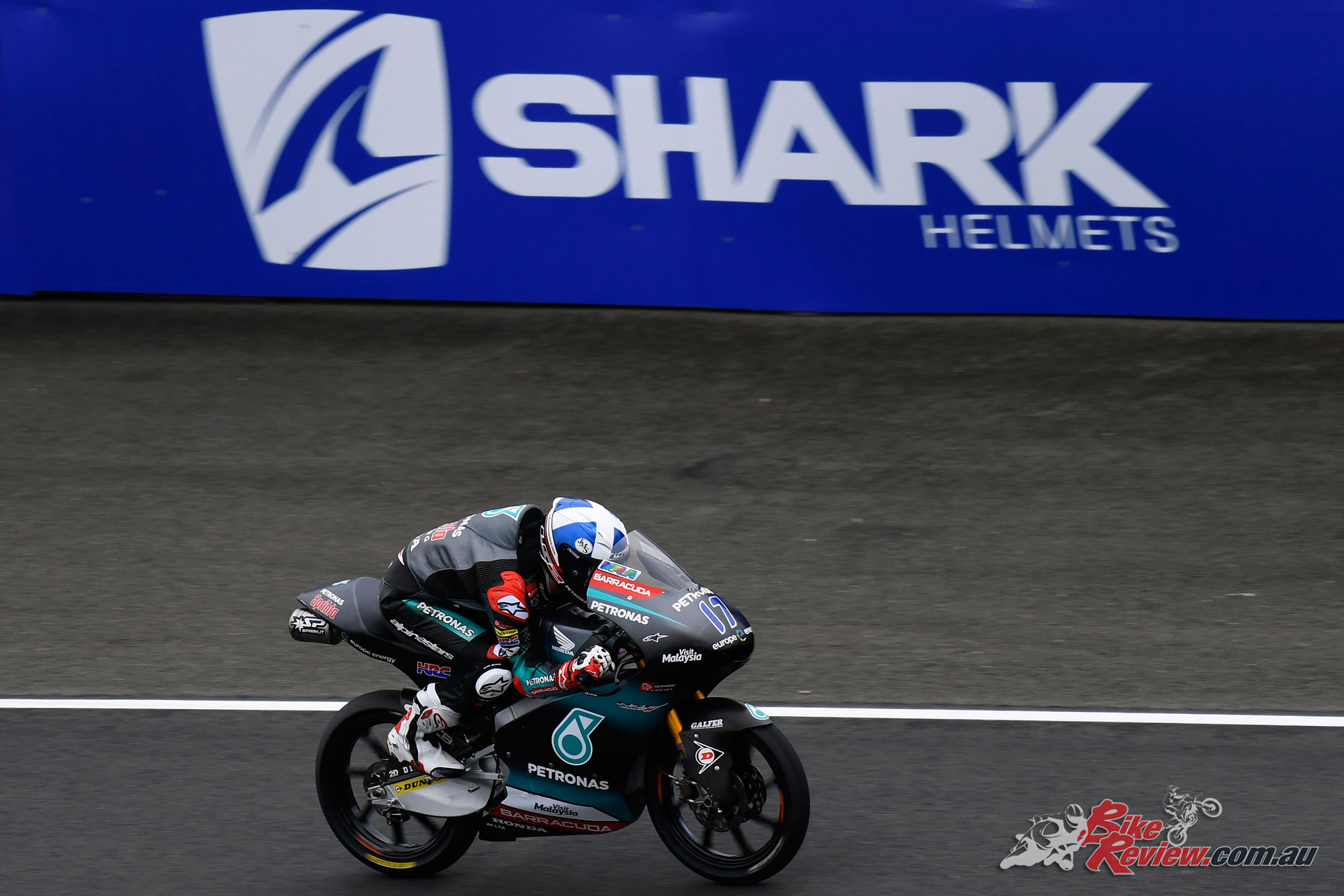 McPhee moved through from Q1 ahead of Marcos Ramirez, Makar Yurchenko and Sergio Garcia, with Argentina winner Jaume Masia surprisingly one to lose out. Once in Q2, McPhee set a 1:42.277 on slick tyres, with the track having dried from this morning’s wet FP3 session, and that was enough to earn him pole.

For Ogura, it’s his career best qualifying and therefore evidently his first front row. The Japanese rider beat compatriot Tatsuki Suzuki to the honour by just over half a tenth, so Jerez podium finisher Suzuki starts fourth at the head of row two. Kömmerling Gresini Moto3’s Gabriel Rodrigo was fifth quickest, ahead of Q1 graduate Ramirez as the Spaniard completes the second row.

Despite a third crash of the weekend, and a second at Turn 3, SIC58 Squadra Corse’s Niccolo Antonelli responded by setting a lap that will see him front row three of the grid in P7. The Italian is aiming to become the first double race winner of the 2019 season, as is Honda Team Asia’s Kaito Toba, who joins Antonelli on row three after going ninth quickest.

The man between the two, Raul Fernandez, won’t be starting eighth due to a 12-place grid penalty, however – so Toba will start P8, and he’ll be joined by Andrea Migno on row three as the Italian also gains a place due to the penalty. Sergio Garcia, after moving through Q1, also drops 12 places on the grid despite having gone tenth quickest.

That means Makar Yurchenko starts 10th, Romano Fenati 11th – the Italian still feeling some effects of his Friday highside – and Aron Canet 12th, with a good few names looking to slice back through the order on Sunday. 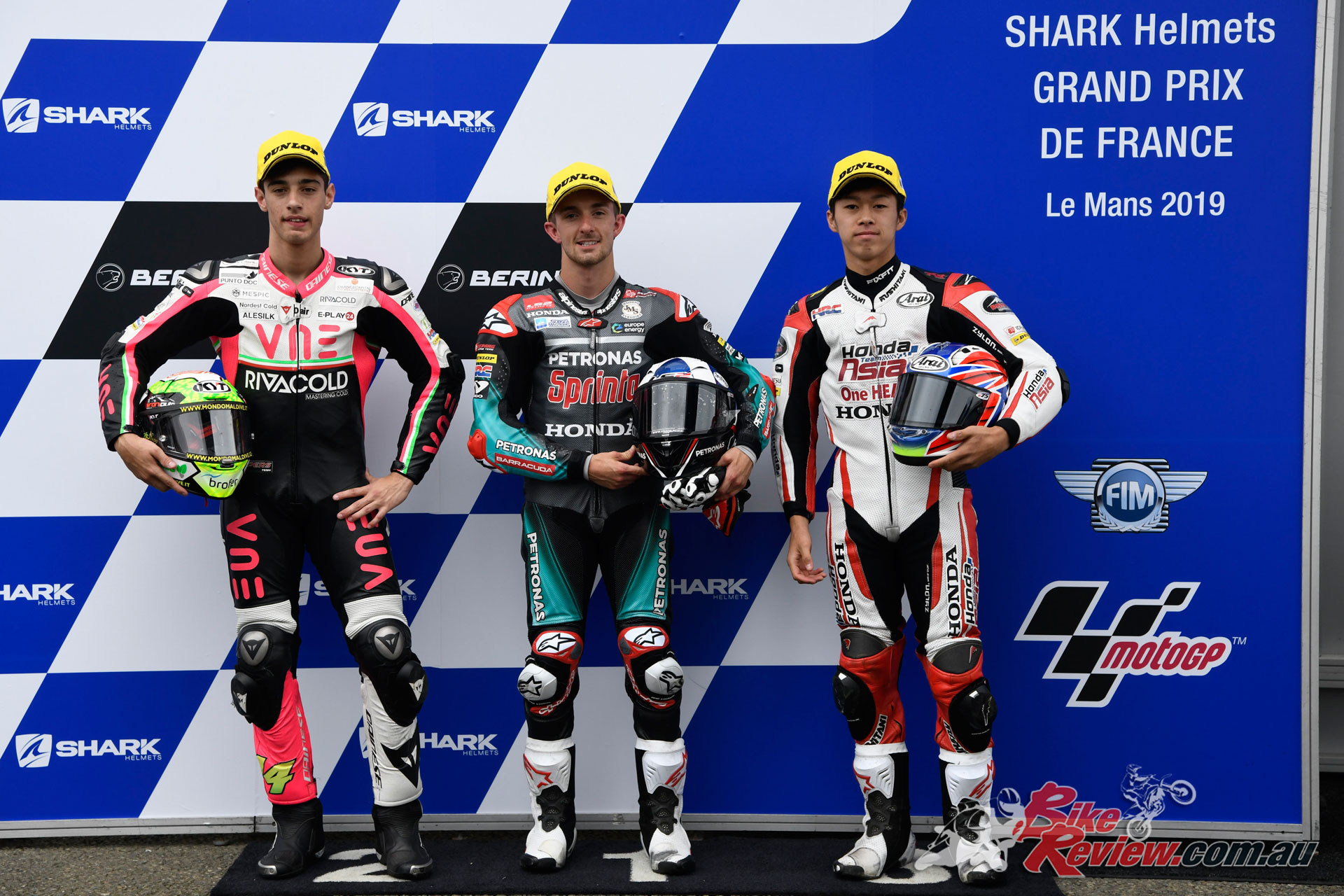