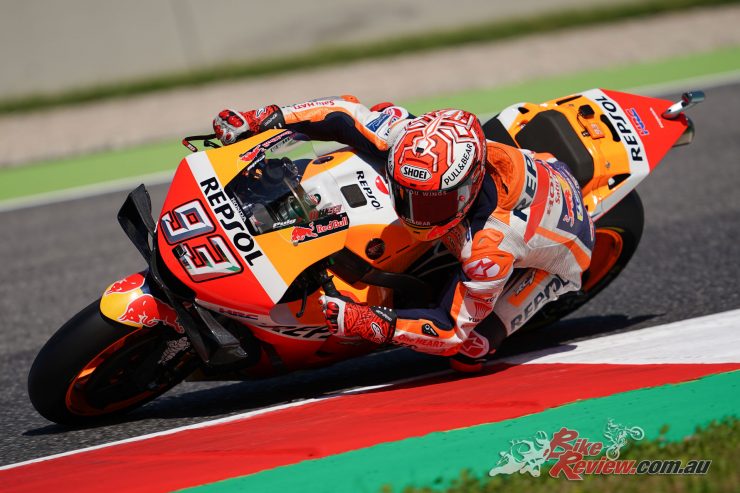 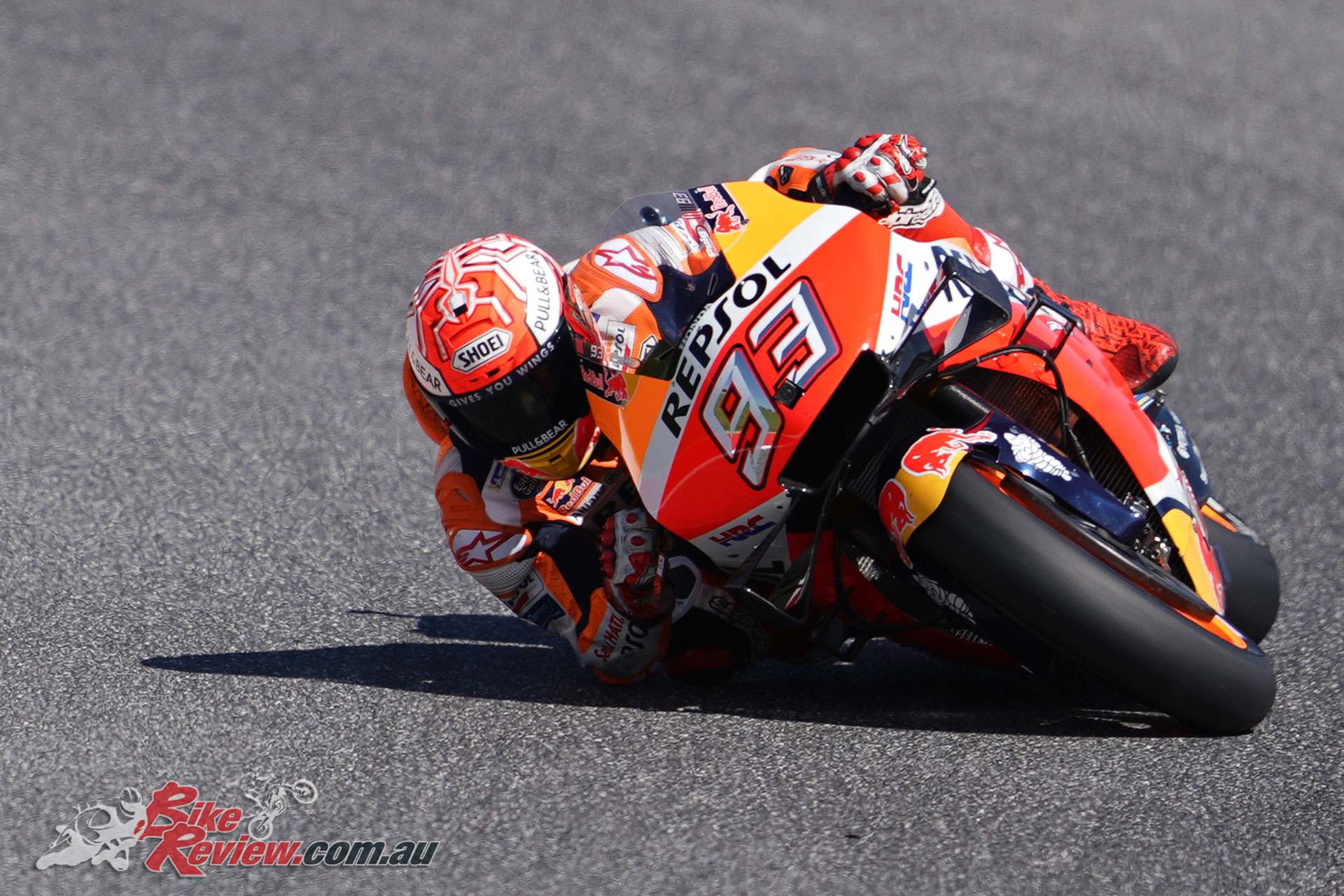 Marc Marquez saying, “It was a difficult Qualifying because it was different to other races and a bit hard to find space. With the first tyre I was ready to attack straight away but then Dovi slowed down so I overtook him and I lost some time there. Pirro was also trying to follow me for the slipstream so tactics were needed. With the second tyre we just followed our strategy and I found a good space with slipstream and I calculated the space to Dovi perfectly. The pole position is important but the most important part is being on the front row. There are a lot of opponents for tomorrow’s race!”

Nevertheless, Frenchman Quartararo will start his first premier class race at Mugello from second as both top Yamaha and top Independent Team rider, with Danilo Petrucci (Mission Winnow Ducati) completing the front row and flying the tricolore after a difficult day for a couple of his compatriots on home turf. 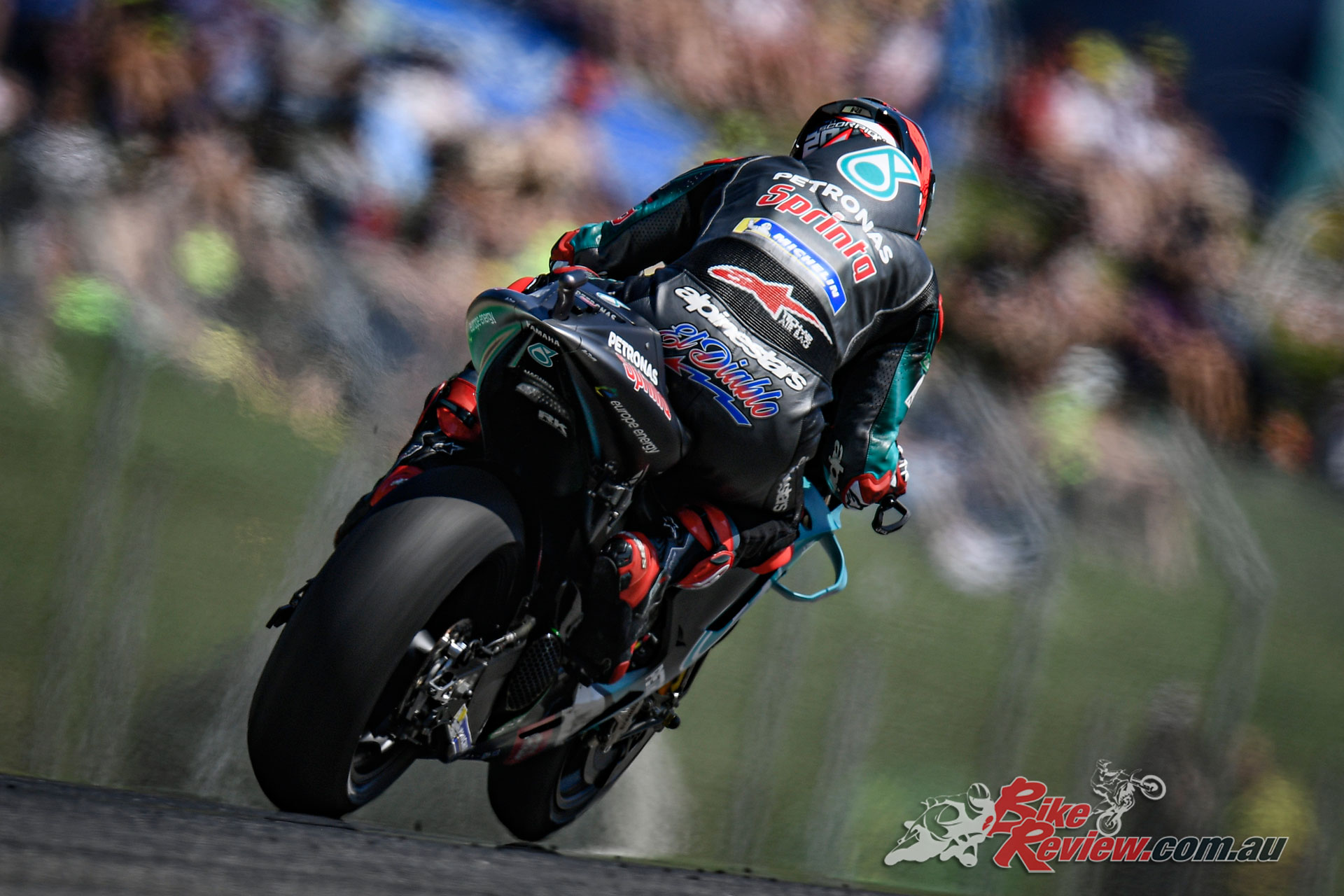 Fabio Quartararo sharing, “It was an incredible qualifying session! When I set a 1:45, I thought it was a very fast lap, but then I was able to repeat it. On my last lap I tried everything but I made some small mistakes. Nevertheless, we managed to finish on the front row. We feel really good with the bike, I’m very happy and our race pace is great. Tyre choice will be critical tomorrow. I love this circuit and I enjoy it a lot on a MotoGP bike. The bike corners very well and I feel very strong. I can’t wait.” 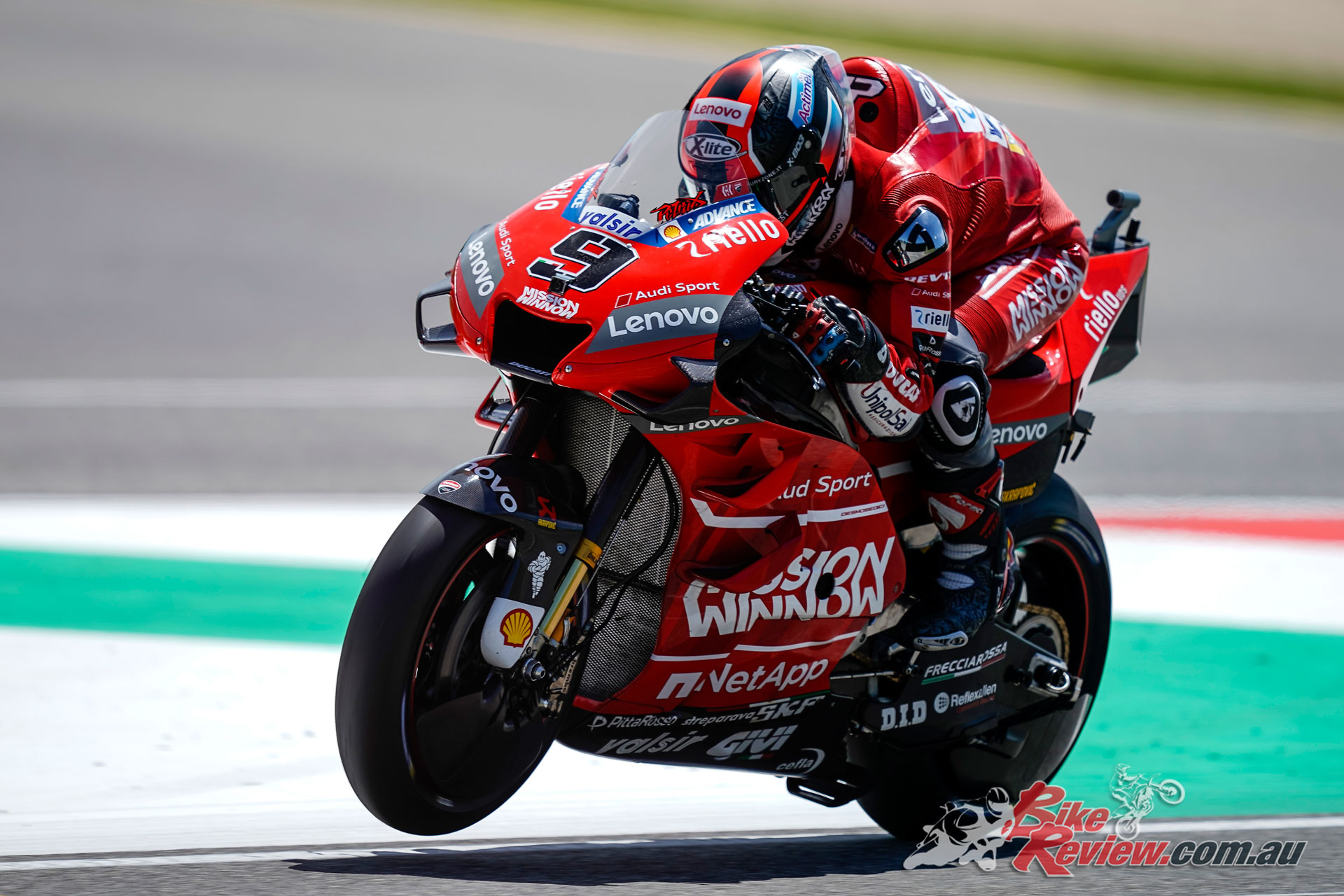 Danilo Petrucci saying, “I’m very happy for this first row, because it was really important for us to make the most of our potential even during qualifying after posting the provisional new best lap in the morning. Before going out on track for Q2, my goal was to do a 1:45.8 and take first row, which is what actually happened, even though someone was able to do slightly better. I expect a tough race tomorrow, because I’m still not 100 percent fit due to a cold. After some laps I feel fatigued, but our pace seems competitive and the support of all the ducatisti in the grandstands will surely give me extra energy. It’ll be crucial to have a good start, then we’ll try to play our cards wisely.” 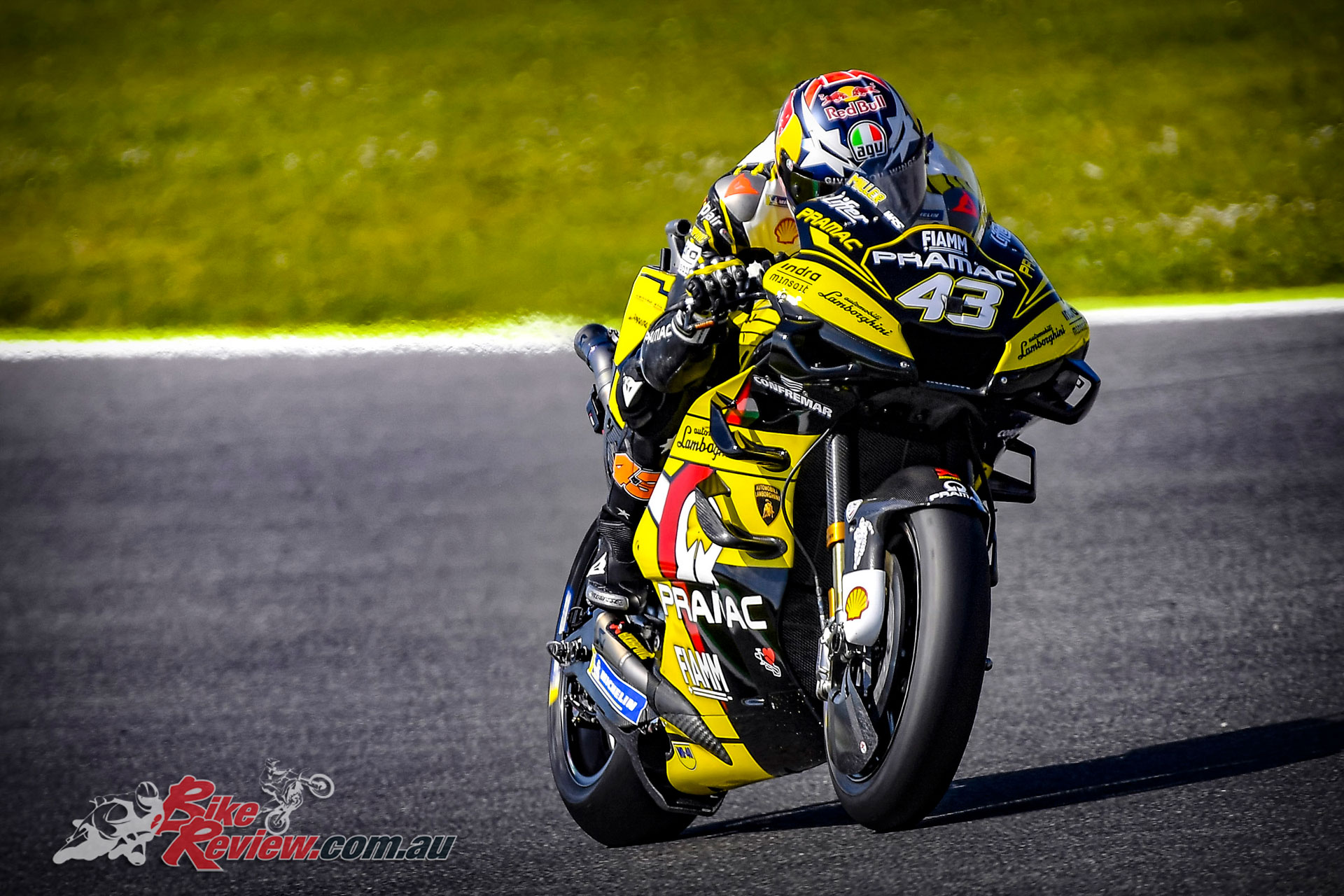 Jack Miller saying after a P5 on the grid result, “I am quite satisfied also because the race pace is positive. We have also worked hard on the tyres and we have taken important data in view of tomorrow’s choice. In qualifying I was expecting a bit more but the second row is not bad.”

It was a star-studded Q1 to begin deciding the grid, with Valentino Rossi (Monster Energy Yamaha MotoGP), Andrea Dovizioso (Mission Winnow Ducati) and Jorge Lorenzo (Repsol Honda Team) all fighting it out to move through, and it was a nail-biter of a finale – for Dovizioso at least.

On his final flying lap it was all or nothing for the 2017 Mugello winner, but he made it count to top wildcard and teammate Michele Pirro by just thousandths – knocking out Alex Rins (Team Suzuki Ecstar), who therefore starts 13th. But that’s better reading than it is for Lorenzo and Rossi, who line up in P17 and P18 respectively after not making it out of Q1 – 13 premier class wins at Mugello on Row 6.

In Q2 then, Dovizioso had another shot – but it was Marquez who was back in the driving seat. After getting followed by Pirro the reigning Champion decided to turn the tables on Ducati in the latter half of the session and actually followed key rival Dovizioso on what would turn out to be his record-breaking pole lap – getting a good tow from the Borgo Panigale machine as the flag came out and able to depose Quartararo. The Frenchman topped FP4 but couldn’t quite eke out those final two tenths, and he didn’t get a tow to the line… 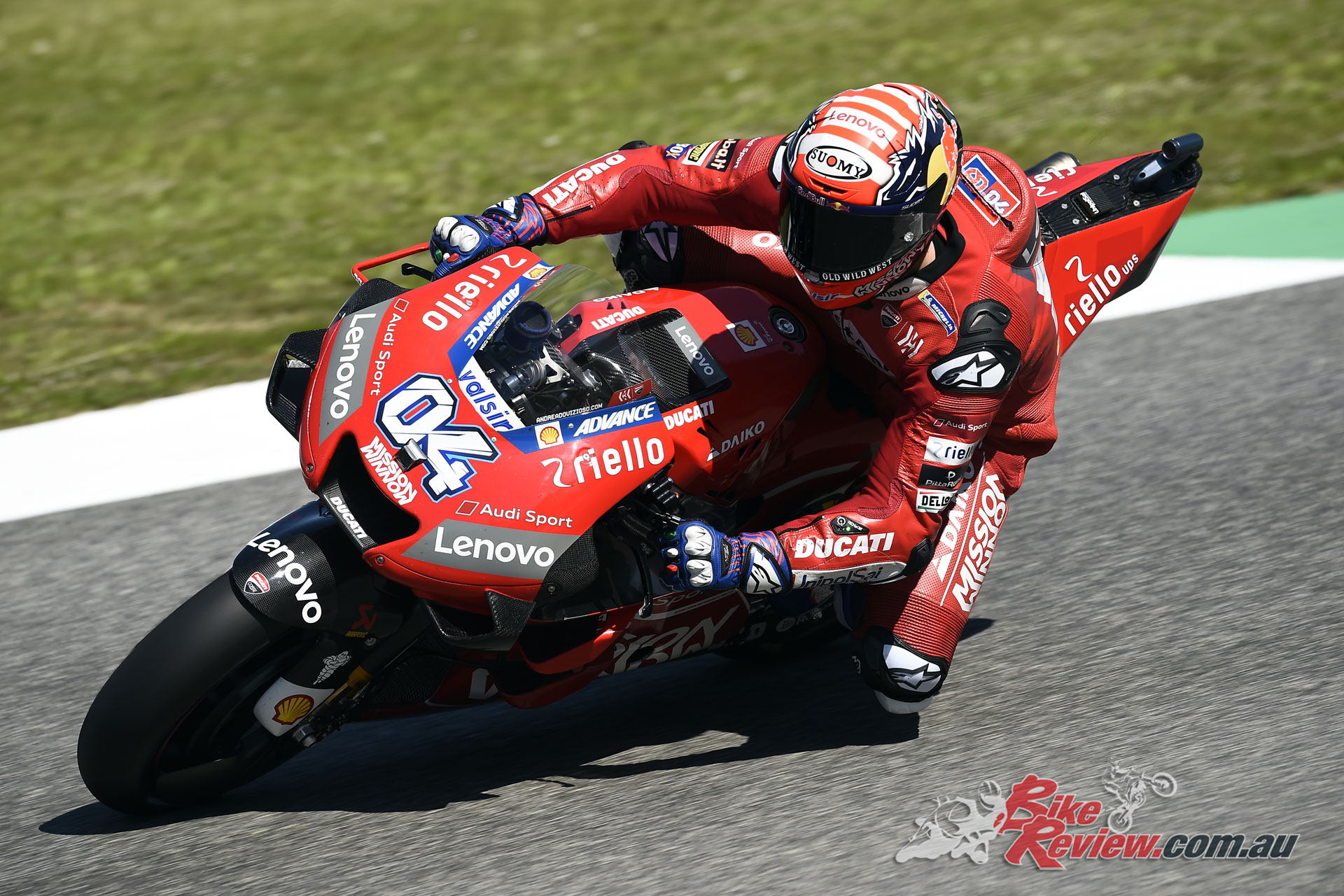 Petrucci then is the sole home hero on the front row, and he’s had some serious pace all weekend. Searching for his first win and with previous podium experience at the venue, he could be one to watch and will be joining Quartararo on the mission to overtake Marquez off the line and convert pace into podium.

Franco Morbidelli (Petronas Yamaha SRT) heads an all-Independent Team Row 2 ahead of Jack Miller (Pramac Racing) and Cal Crutchlow (LCR Honda Castrol), with Maverick Viñales (Monster Energy Yamaha MotoGP) in P7 and Friday’s fastest, rookie Francesco Bagnaia (Pramac Racing), having a solid qualifying in P8 – just ahead of Dovizioso, who enjoyed a less solid day at the office. ‘DesmoDovi’ will need quite a start to try and get in the fight at the front from the off on Sunday – and it’s his 300th Grand Prix.

Takaaki Nakagami (LCR Honda Idemitsu) locks out the top ten, ahead of Pol Espargaro (Red Bull KTM Factory Racing) after another automatic graduation to Q2 for the impressive Spaniard. Pirro slots into 12th as he starts his 100th GP, just ahead of the aforementioned Rins – one of many big names looking to launch forward quick style when the lights go out.

Mugello is always an incredible event, but with such a tantalising grid and a mix of searing ambition and veteran experience on every row, 2019 will surely be something special. Don’t miss the premier class race at 14:00 local time (GMT+2). 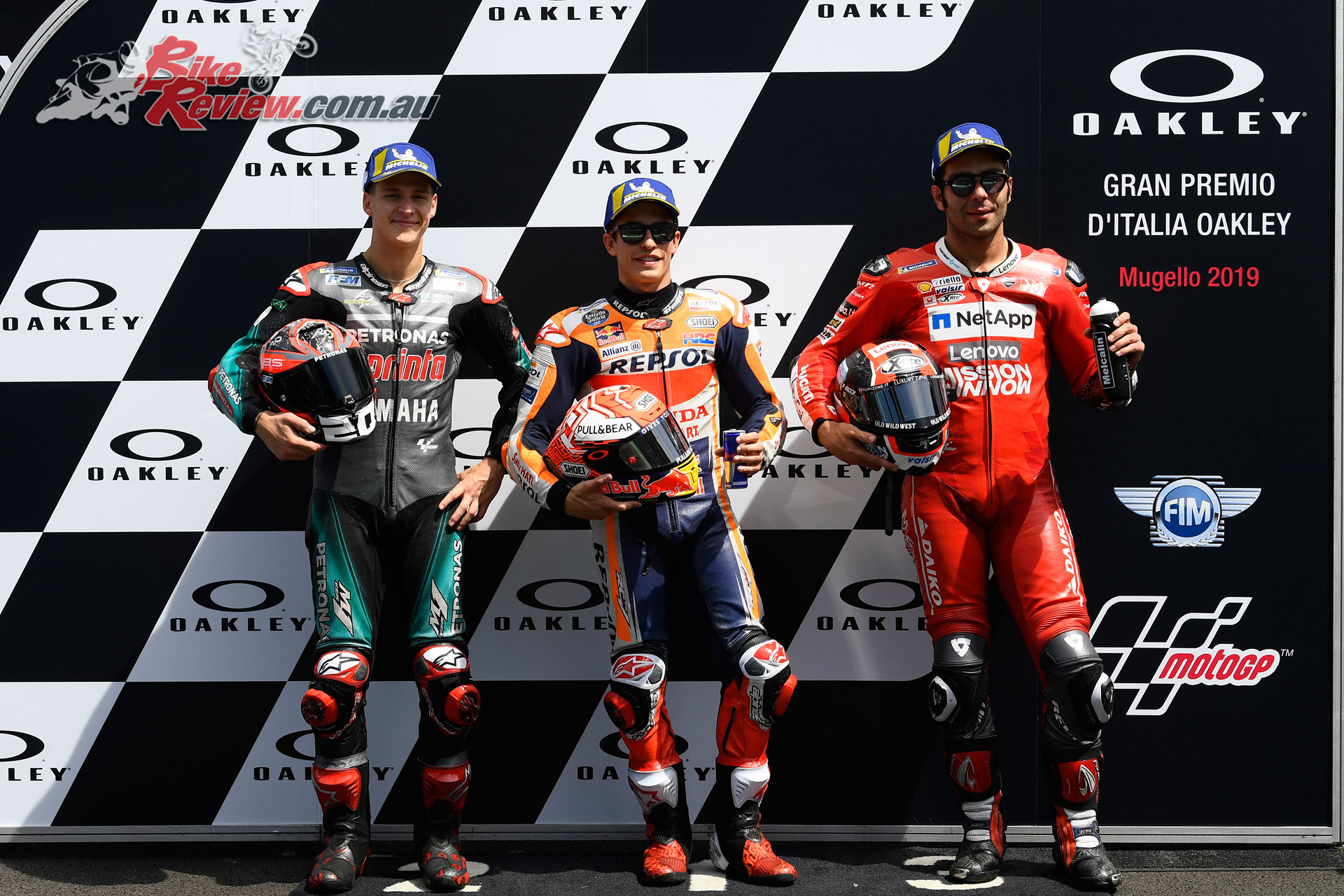 Marcel Schrötter (Dynavolt Intact GP) heads up the Moto2 grid at the Gran Premio d’Italia Oakley after another record-breaking day, with the German taking his third career pole position by an infinitesimal 0.040 ahead of teammate Tom Lüthi.

Alex Marquez (EG 0,0 Marc VDS) completes the front row, qualifying in the same P3 from which he took his first win of the year last time out and the third man of six to break the previous lap record. Championship leader Lorenzo Baldassarri (Flexbox HP 40), meanwhile, had a difficult day at the office and will start his home Grand Prix from P15.

Baldassarri was also one of four riders who moved through from Q1, with the Italian graduating just behind rookie Jorge Martin (Red Bull Ajo KTM) and Xavi Vierge (EG 0,0 Marc VDS) but marginally ahead of compatriot Nicolo Bulega (Sky Racing Team VR46) as a few famous faces had initially failed to make the cut in the morning.

Bulega would go on to play a big role in the final grid, however, and he heads up Row 2 after his best qualifying in the class. He’s the top home rider and ahead of man of the moment Jorge Navarro (MB Conveyors Speed Up), with Friday’s fastest man, Luca Marini, making it both Sky Racing Team VR46 bikes on the second row as he ended the session in P6.

Tetsuta Nagashima (ONEXOX TKKR SAG Team) got the better of Sam Lowes (Federal Oil Gresini Moto2) to take P7, with the Brit down in eighth after a crash in FP3. Augusto Fernandez (Flexbox HP 40) is in ninth after he topped FP3 but failed to repeat the feat in the afternoon, with Remy Gardner (ONEXOX TKKR SAG Team) completing the top ten despite still recovering from a broken collarbone.

Baldassarri down in P15 will be one to watch on race day as he pushes to come back through the back, as will Mattia Pasini (Petronas Sprinta Racing) down in P18 – can the Championship leader and the 2017 Mugello winner strike back on Sunday? Don’t miss the intermediate class in action 12:20 local time (GMT+2). 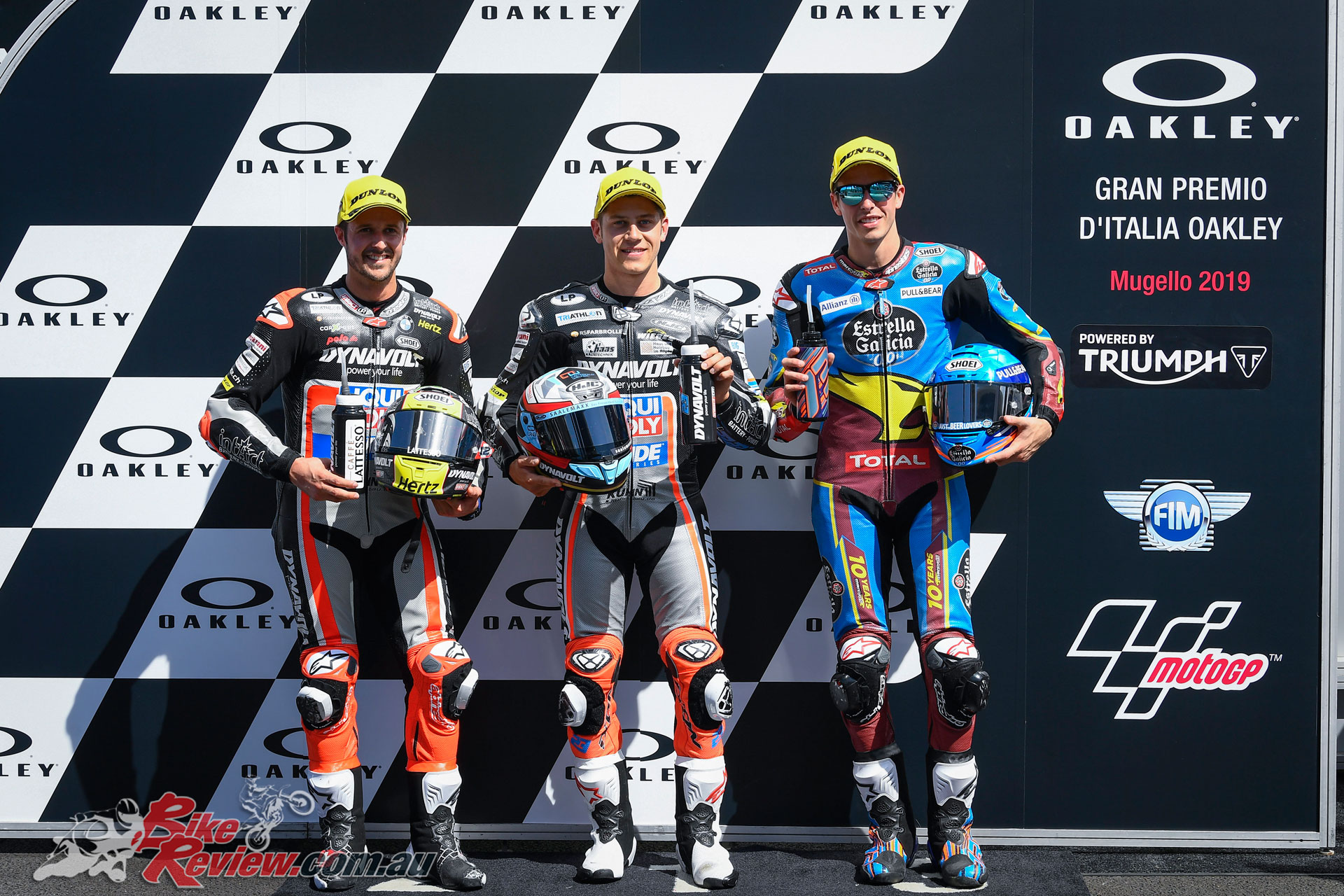 Home hero Tony Arbolino (VNE Snipers) will start his home Gran Premio d’Italia Oakley from his third career pole at Mugello, setting a stunning new lap record in qualifying to end Saturday nearly seven tenths clear of the competition. That competition is led by Gabriel Rodrigo (Kömmerling Gresini Moto3), 0.673 down in second, with Lorenzo Dalla Porta (Leopard Racing) the last man within a second of pole to lock out the front row. 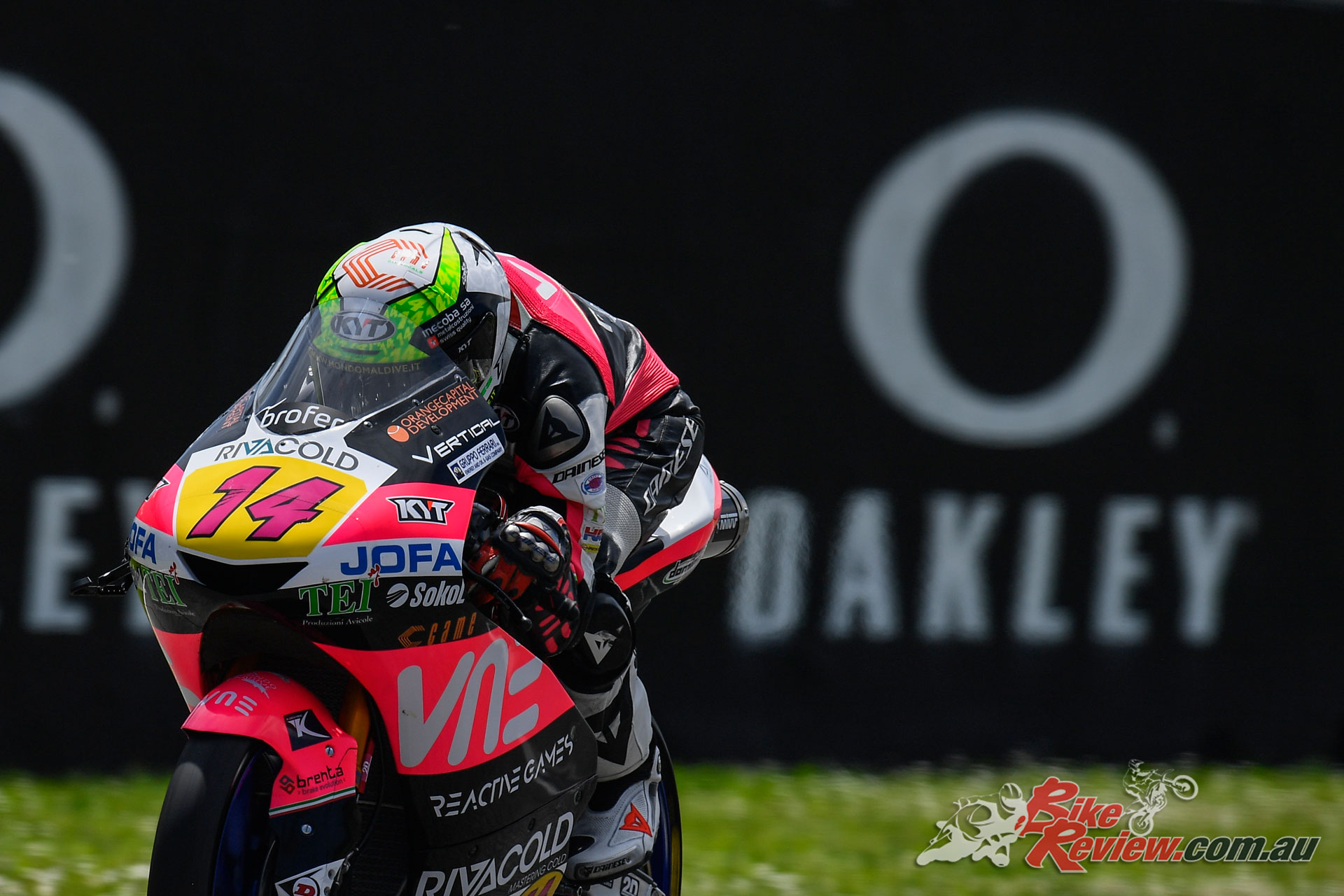 After a frantic Q1 that saw rookie Raul Fernandez (Sama Qatar Angel Nieto Team) lead the way ahead of Marcos Ramirez (Leopard Racing), Darryn Binder (CIP – Green Power) and Andrea Migno (Bester Capital Dubai), the stage was set for a showdown in Q2 and, as always in Moto3™, there was plenty of action packed in.

After the first run it was Friday’s fastest man Tatsuki Suzuki (SIC58 Squadra Corse) who led the way and Arbolino hadn’t even set a time, but there was drama for both Suzuki and teammate Antonelli as they’d left left pitlane before the lights went green – something that would later affect their grid positions immensely.

Rodrigo was the first to move the goal posts and take over at the top at that point though, and the Argentine lowered his laptime again next time around. But then came Arbolino and the new lap record on his final lap of the session, with the Italian celebrating even before popping out from behind the bubble.

Rodrigo was therefore forced to settle for second, with Dalla Porta the man who’ll start alongside him in third after having moved up into the mix in the final few minutes. Andrea Migno was another late improver, the 2017 winner taking P4 at the flag to head the second row – an impressive feat after coming through Q1.

Suzuki and teammate Niccolo Antonelli were fifth and sixth fastest at the flag, but their first laptimes were then cancelled after they were deemed to have gained an unfair advantage due to their earlier infraction – so it’s 2014 Mugello winner Romano Fenati (VNE Snipers) who starts fifth, with Qatar GP winner Kaito Toba (Honda Team Asia) set to start alongside him in P6. After ending Day 1 outside the top twenty, the turnaround from the Japanese rider is an impressive one.

Will qualifying prove to matter that much at Mugello, where the slipstream rules all? The likes of Celestino Vietti (Sky Racing Team VR46) – 16th – and Le Mans winner John McPhee (Petronas Sprinta Racing) – 17th – will join Antonelli, down in 18th, in hoping it doesn’t and that race day shuffles the pack once again. 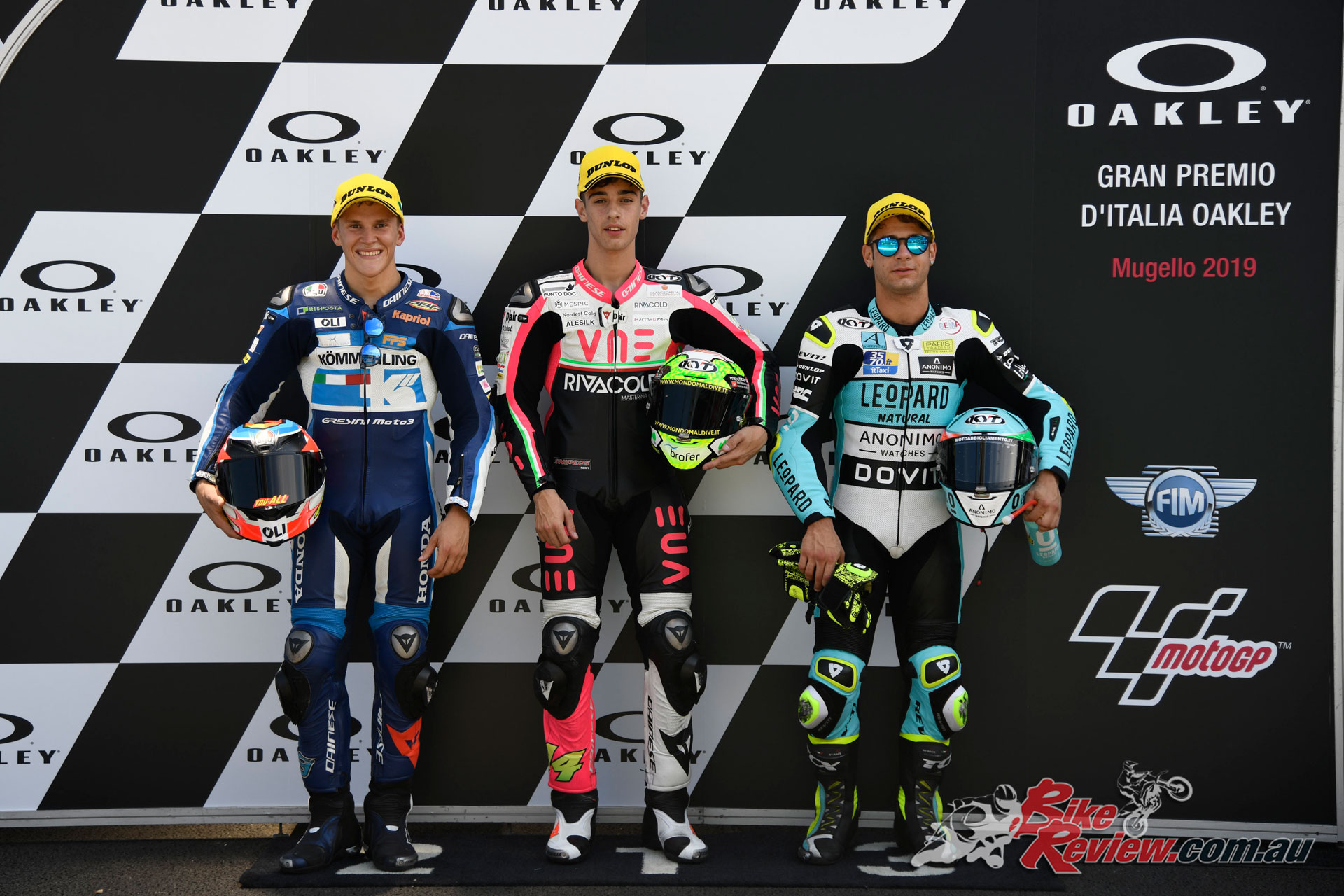