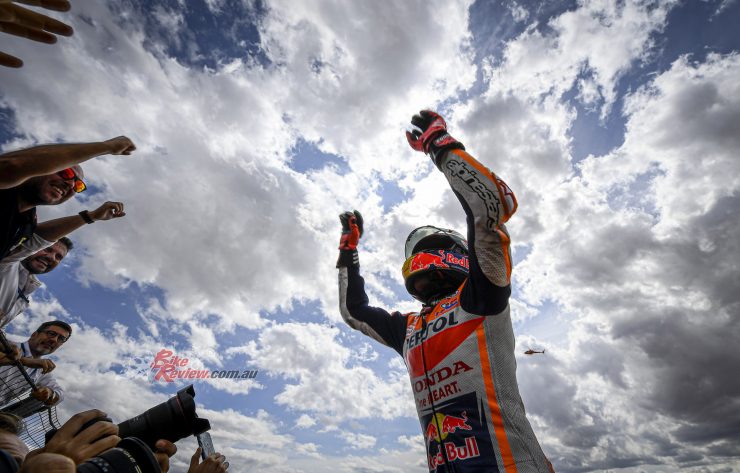 Marquez reigns MotorLand ahead of Dovizioso and Miller

Marc Marquez (Repsol Honda Team) has looked unstoppable for much of the weekend at MotorLand Aragon, and that was no different come race day. In his 200th Grand Prix, the reigning Champion couldn’t be caught, escaping the pack early and managing the gap to give himself a 98-point lead heading into Thailand. In other words, Championship point… 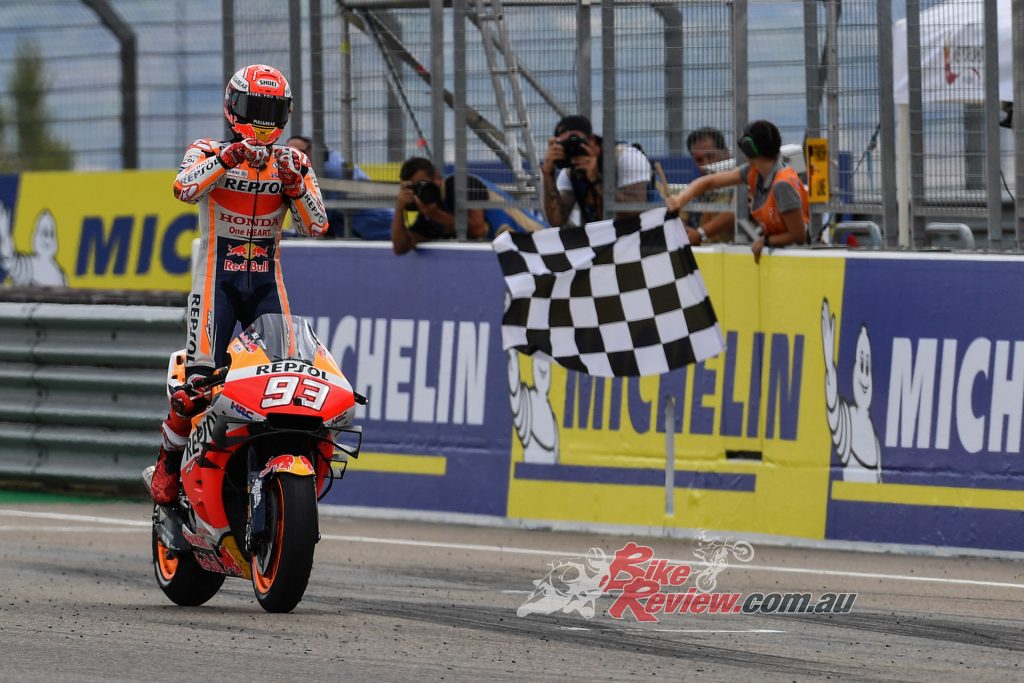 That was despite an impressive comeback from Andrea Dovizioso (Ducati Team), with the Italian starting tenth and made to work for it as he made his way through the pack to come home second. Jack Miller (Pramac Racing) completed the podium, the Australian playing his cards to perfection for a late lunge on Maverick Viñales (Monster Energy Yamaha MotoGP) in the fight for third. 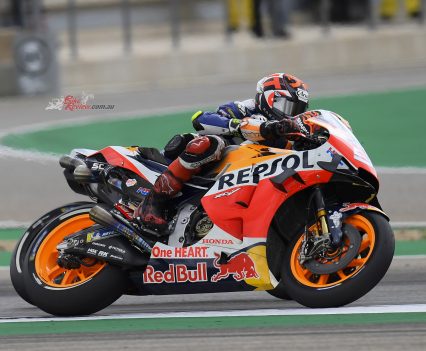 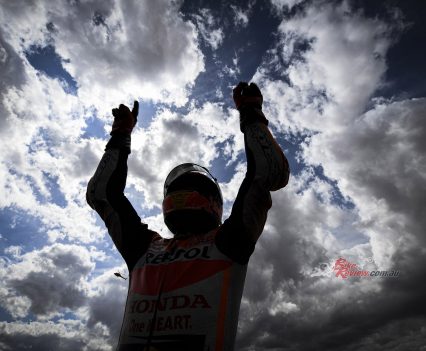 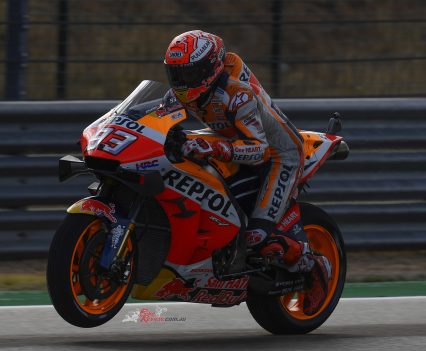 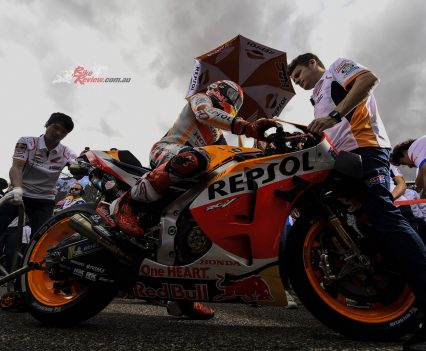 It was Marquez who got the holeshot from pole, Plan A executed to perfection as a lightning start saw the number 93 beat Fabio Quartararo (Petronas Yamaha SRT) into Turn 1, with Miller getting a good launch from P4 on the grid to take P3. Viñales slipped to P4 with Quartararo giving chase to Marquez on the opening lap, but by the time they crossed the line, the reigning Champion was a second down the road.

Meanwhile, there was drama early on for the fast-starting Alex Rins (Team Suzuki Ecstar), the Spaniard overcooking a move at Turn 12 and barrelling into Franco Morbidelli (Petronas Yamaha SRT). The latter crashed out, with Rins dropping to P17 as up the road, Marquez was powering clear. Miller was now the man leading the chase but the gap was quickly up to 1.8 seconds by Lap 4, with the race rapidly becoming a battle for the remaining podium places. 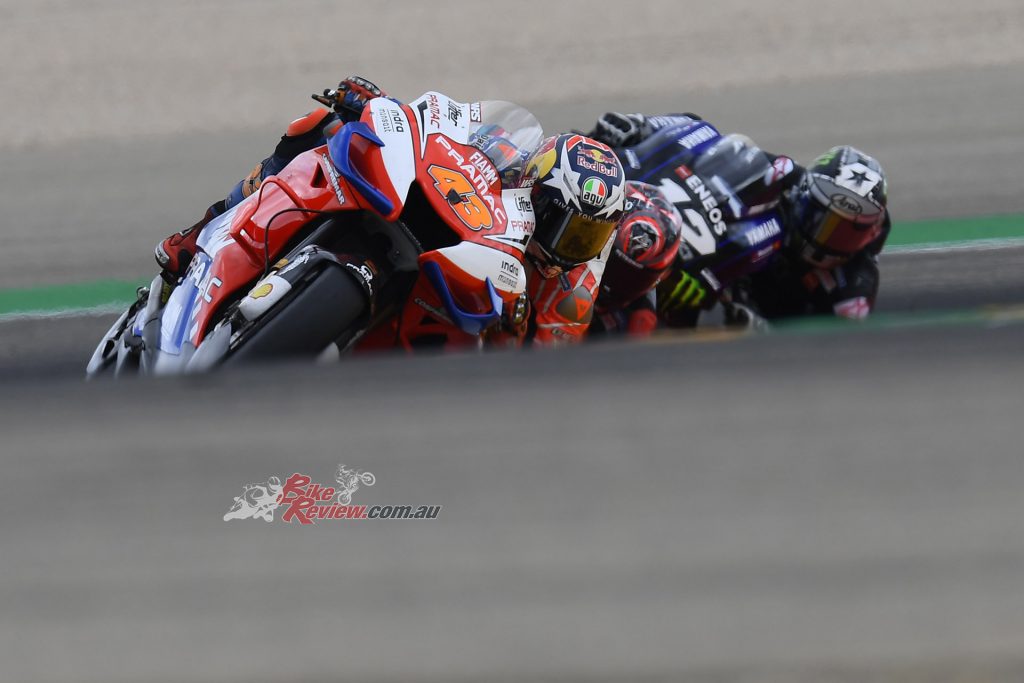 In that fight, Miller was holding off the Yamahas of Viñales and Quartararo, but it wasn’t too long until Viñales got the better of the Frenchman and then immediately started to reel in Miller’s half-second advantage. He passed the Australian on Lap 8 as the riders inside the top seven bunched up, with Dovizioso up behind Quartararo and Aleix Espargaro (Aprilia Racing Team Gresini) holding off Cal Crutchlow (LCR Honda Castrol) in sixth and seventh. 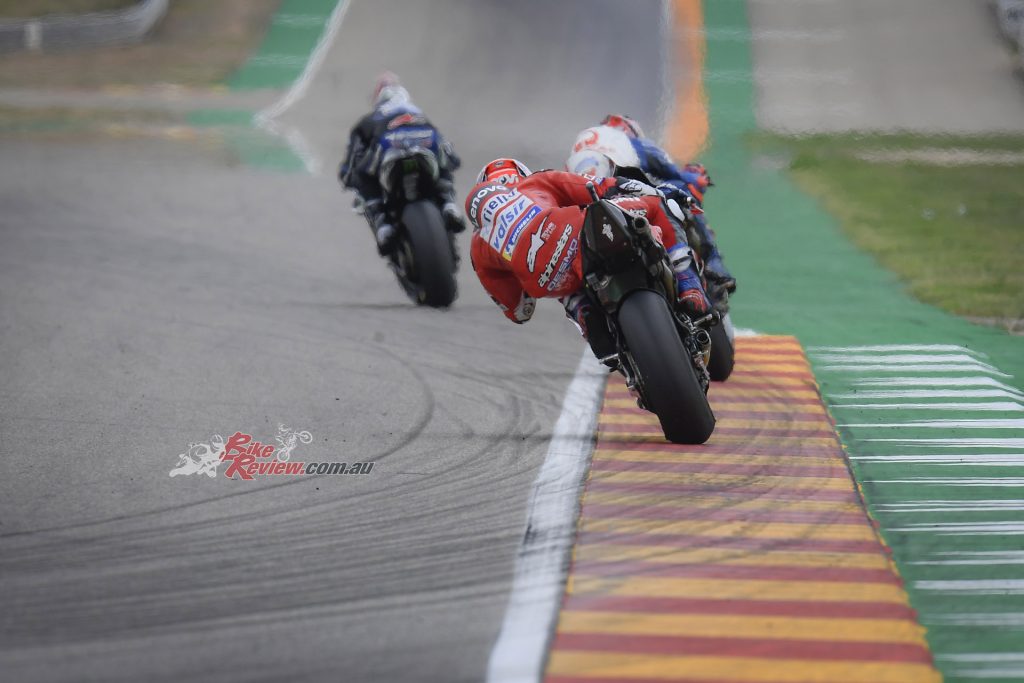 Lap 9 saw Dovi pounce on Quartararo’s Yamaha and the Italian locked his radar onto the back of fellow GP19 rider Miller, with Viñales the man up next. Soon after, Dovi made his move on Miller at Turn 1, but the Pramac rider wasn’t going to cave in easy as and the duo then started to haul in Viñales. The three were split by just a second heading into the last handful of laps and as Viñales started to fade, he was under increasing pressure.

Three to go and Viñales was still holding onto P2, but Dovizioso used the Ducati power to grab P2 down the back straight, leaving Miller to try and pounce on the Yamaha next. The Australian waited until Turn 1 on the last lap, just about getting it stopped and keeping it together for the rest of the lap for an impressive third podium of the season. Dovi had second wrapped up and coming onto the back straight for the final time, there was nothing more Viñales could do. 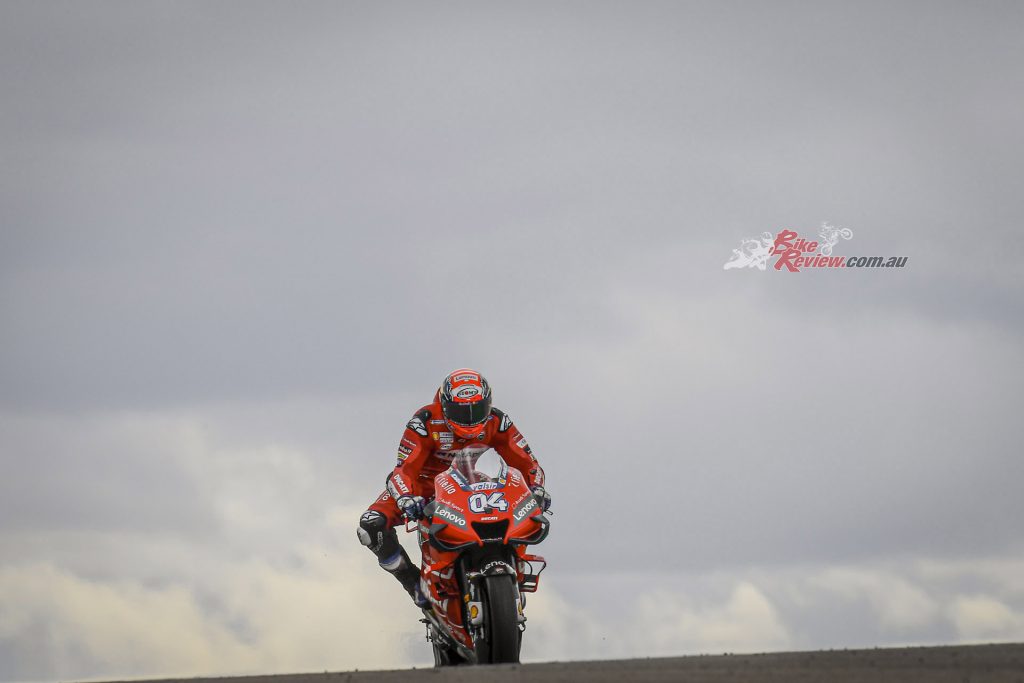 And so Marquez crossed the line for his fourth straight win at MotorLand on his 200th Grand Prix start to extend his lead to 98 points. Dovizioso’s recovery from P10 was completed in an ever-intelligent ride to second, with Miller impressing to complete the podium and take top Independent Team rider honours.

Viñales was left disappointed with fourth but it was a valiant effort nonetheless, with Quartararo coming home just behind the Spaniard to complete the top five and take another good haul of points after a mature ride on the limit. Crutchlow produced a solid showing to finish P6 for the third time in four races, the British rider just edging out Aleix Espargaro. The sterling effort from the Aprilia rider secured his best result of the season, and the best for the Noale factory so far in 2019. 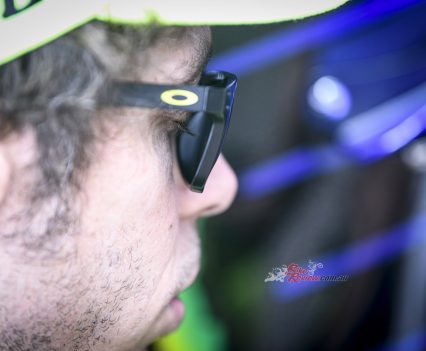 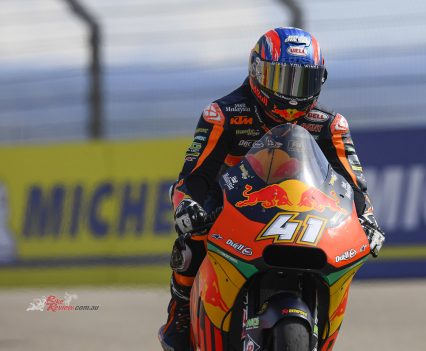 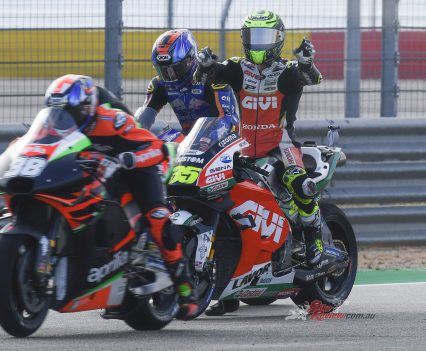 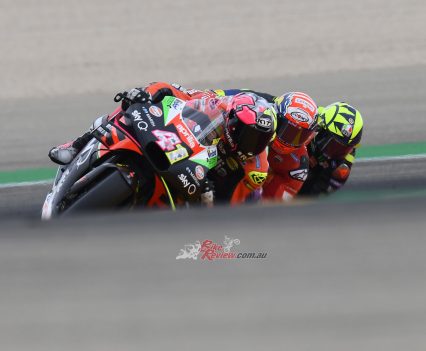 Valentino Rossi (Monster Energy Yamaha MotoGP) was in the battle for the top five in the early stages before the nine-time World Champion dropped back to P8, with Rins fighting back to P9 after his opening lap incident and a subsequent Long Lap penalty. LCR Honda Idemitsu’s Takaaki Nakagami won an intense battle for the top 10 which saw him take on Andrea Iannone (Aprilia Racing Team Gresini), Ducati Team’s Danilo Petrucci, Miguel Oliveira (Red Bull KTM Tech 3) and Joan Mir (Team Suzuki Ecstar), with the group all finishing within two seconds of each other in that order. Tito Rabat (Reale Avinita Racing) took the final point in P15. 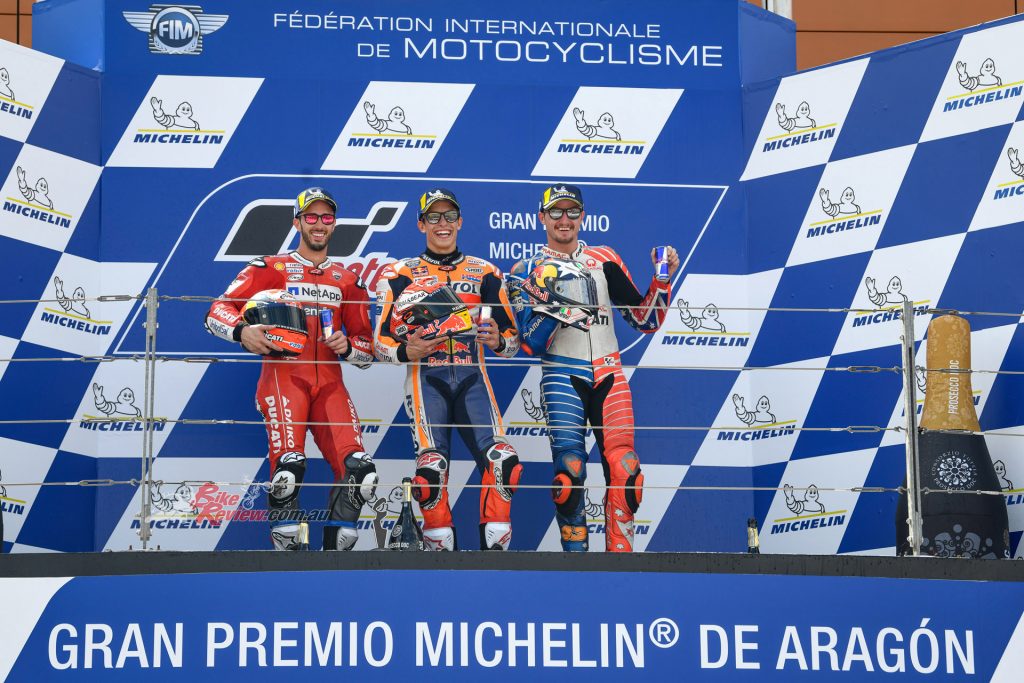 Marc Marquez: “It was the perfect weekend, we did an amazing job all weekend, from the beginning we started in a good way to understand how it was, we raced the setup we started with in FP1, something for the first time all year. But apart from this, the strategy of the race was clever, I was clear about my strategy and I pushed a lot in the first three laps then tried to manage the distance I’m happy, because it was a good 25 points but this guy here never gives up! He’s still pushing, but in Thailand we have the first match point and I’ll do my best.”