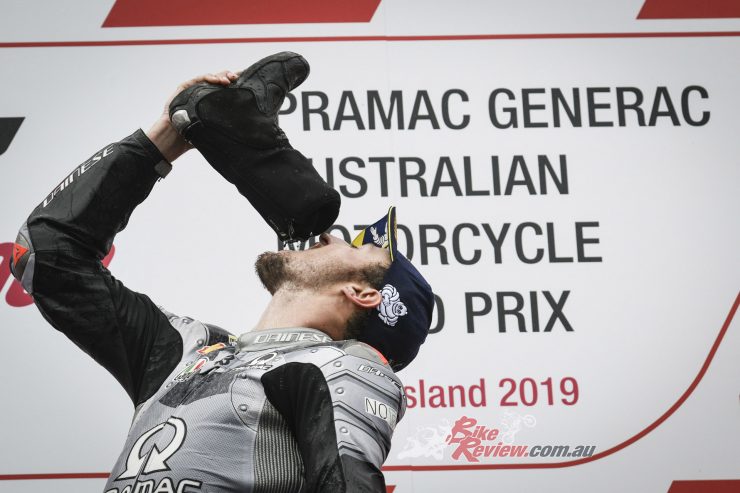 Marc Marquez (Repsol Honda Team) and Maverick Viñales (Monster Energy Yamaha MotoGP) played high speed chess at the Pramac Generac Australian Motorcycle Grand Prix, with the two locked in a tense duel for supremacy throughout. It wasn’t a duel fought in overtakes and swapped paint, it was a duel in pure speed – with the two perfectly matched the point they made a break for it right down to the final lap. 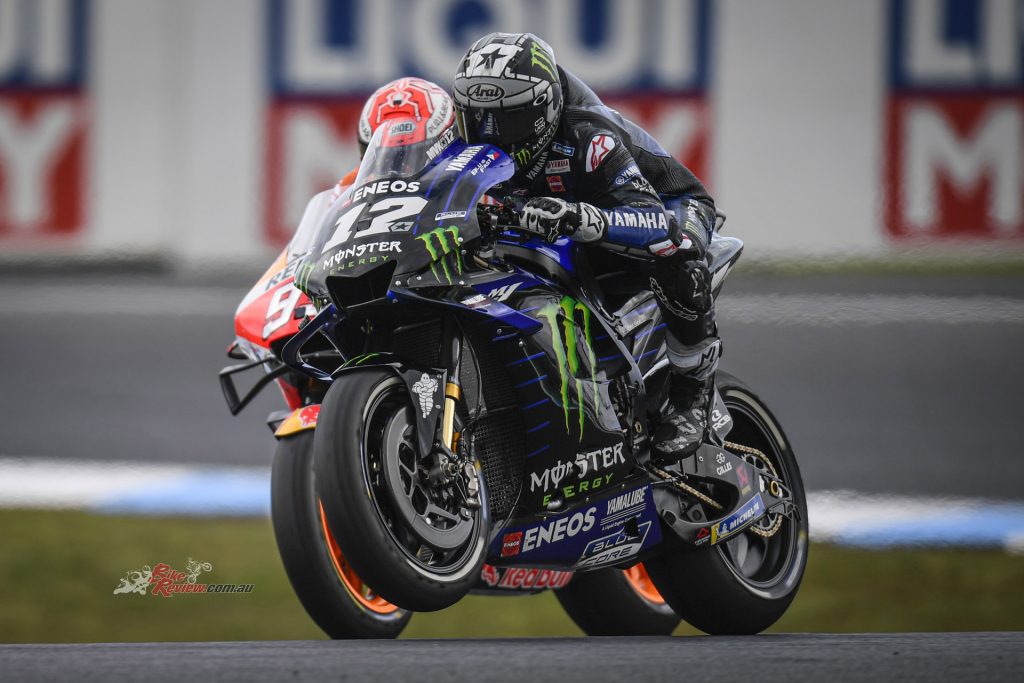 Vinales was dominant until the last lap crash.

That final lap was a dramatic one as Marquez struck early and Viñales dug deep to fight back – and then suffered a dramatic crash that decided the first time the two men have really gone head to head. With that, Cal Crutchlow’s (LCR Honda Castrol) impressive ride became one to second place and his best finish of the season, with Jack Miller (Pramac Racing) completing the podium to the delight of the home fans – the first Aussie to stand on the rostrum on home soil in the premier class since MotoGP™ Legend Casey Stoner won the 2012 event at Phillip Island. 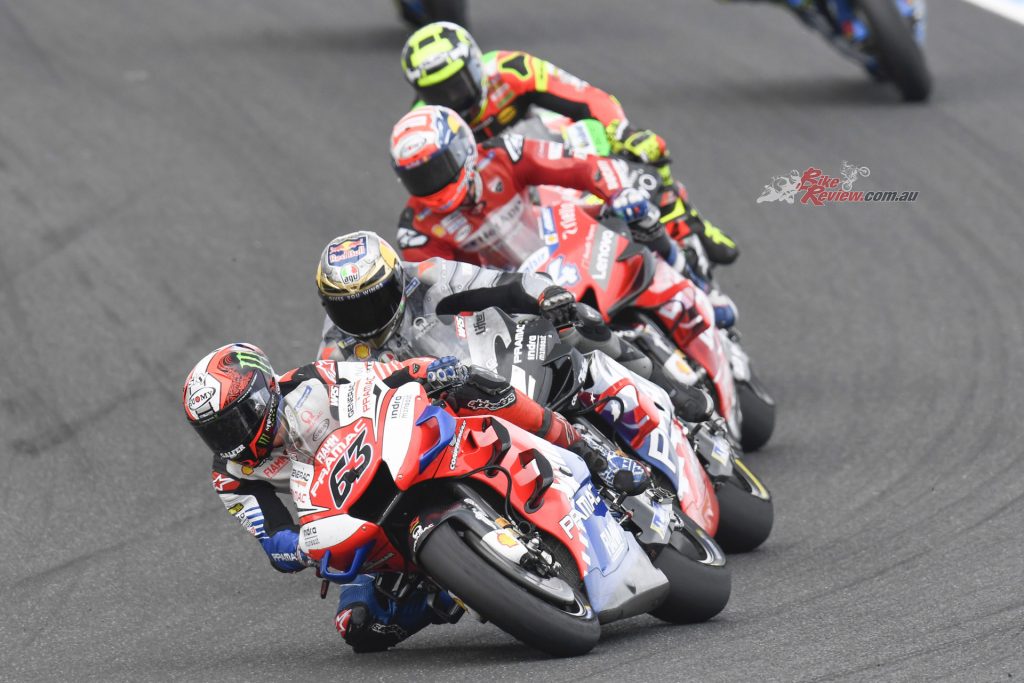 At times it was more like a Moto3 race than the big guns.

From the off, the race was a classic – and dramatic. From P4 on the grid, Valentino Rossi (Monster Energy Yamaha MotoGP) got a great launch to get the holeshot into Doohan Corner, with Viñales slipping to P6 from pole. Then, at Turn 2, two heavyweights were out of the race: Danilo Petrucci (Ducati Team) was pushed slightly wide by Marquez as the packed shuffled into the left-hander, and the Italian was a little too eager on the gas, highsiding and dramatically launched into Fabio Quartararo (Petronas Yamaha SRT). The Frenchman was already wide and almost on the grass, therefore sadly also right in the path of the oncoming Italian. Riders ok, but out of a pivotal race. 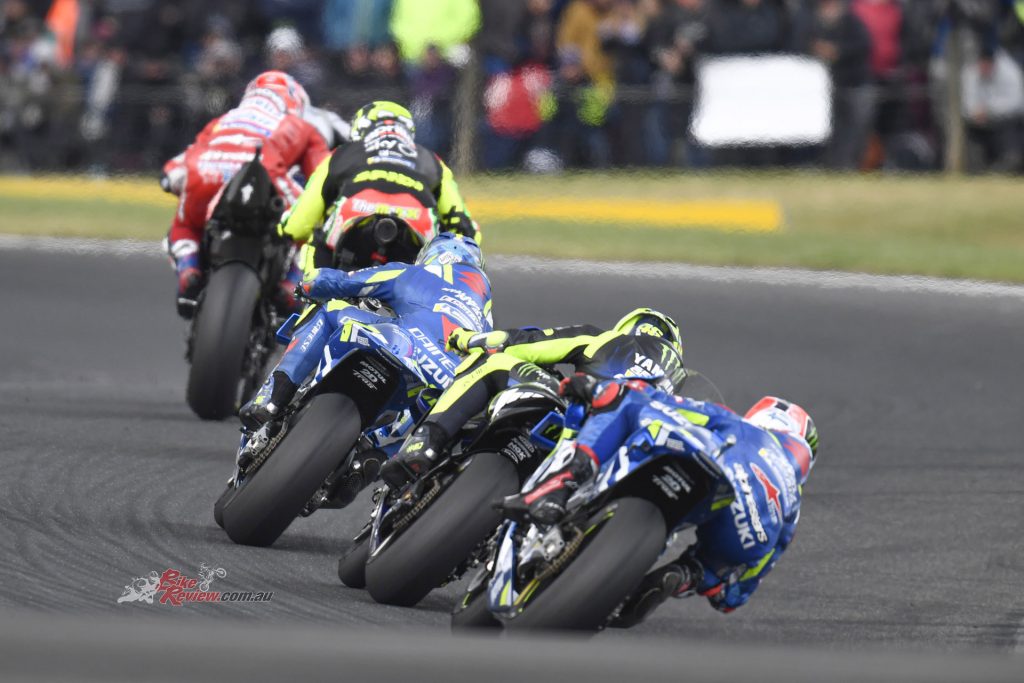 The Suzukis and Aprilias were strong early on.

Back at the front, ‘The Doctor’ was still leading the way on his 400th Grand Prix start, with Crutchlow and Aprilia Racing Team Gresini’s Andrea Iannone slotting in behind the Italian as a freight train of nine riders formed at the front in the opening handful of laps. Rossi held P1 until Lap 4 when Crutchlow powered past the Yamaha into Turn 1, before Iannone then spectacularly led the race for Aprilia as Crutchlow, Iannone, Rossi, Marquez, Viñales, Aleix Espargaro (Aprilia Racing Team Gresini), Andrea Dovizioso (Ducati Team), Miller and Alex Rins (Team Suzuki Ecstar) all battled one another in a scintillating start to the 2019 Australian GP. 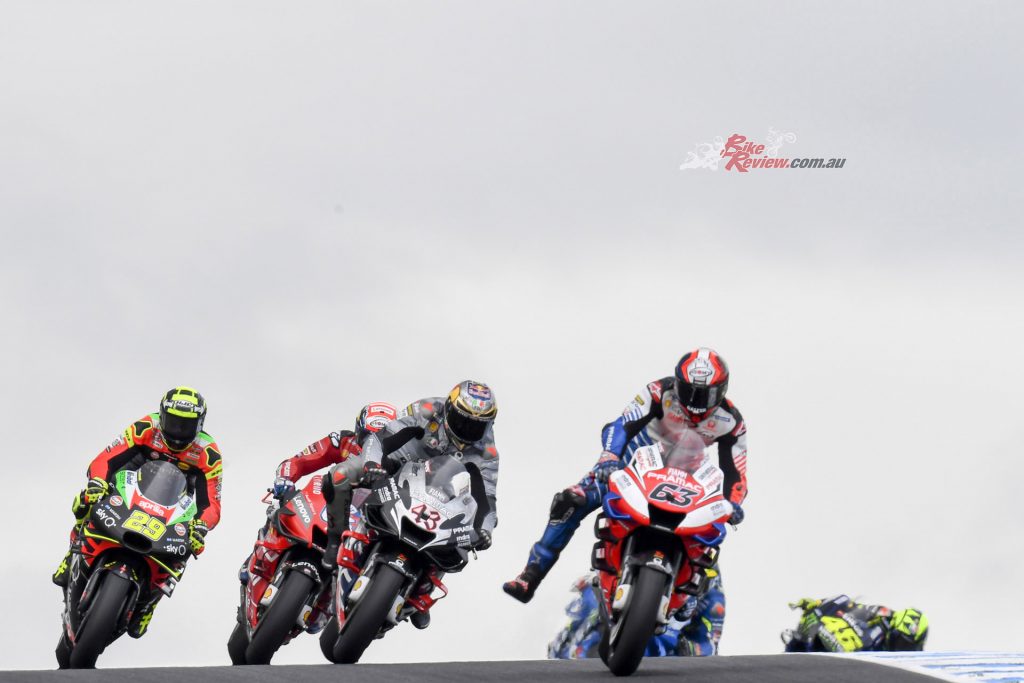 The man with the pace for most of the weekend was slowly picking his way through the pack though. Viñales was up to third on Lap 8, second on Lap 9 and the lead on Lap 10. Knowing the polesitter had the pace to make a break, third place Marquez was then in a hurry to get past Crutchlow as he shoved the Brit wide at the top of Lukey Heights. That dropped the number 35 down to P4 behind Iannone, and Viñales and Marquez immediately seemed to pull the pin. Crutchlow passed the Aprilia of Iannone into Turn 1 and attempted to go with the leading duo as all three set mid 1:29s and escaped the monster battle for P4. 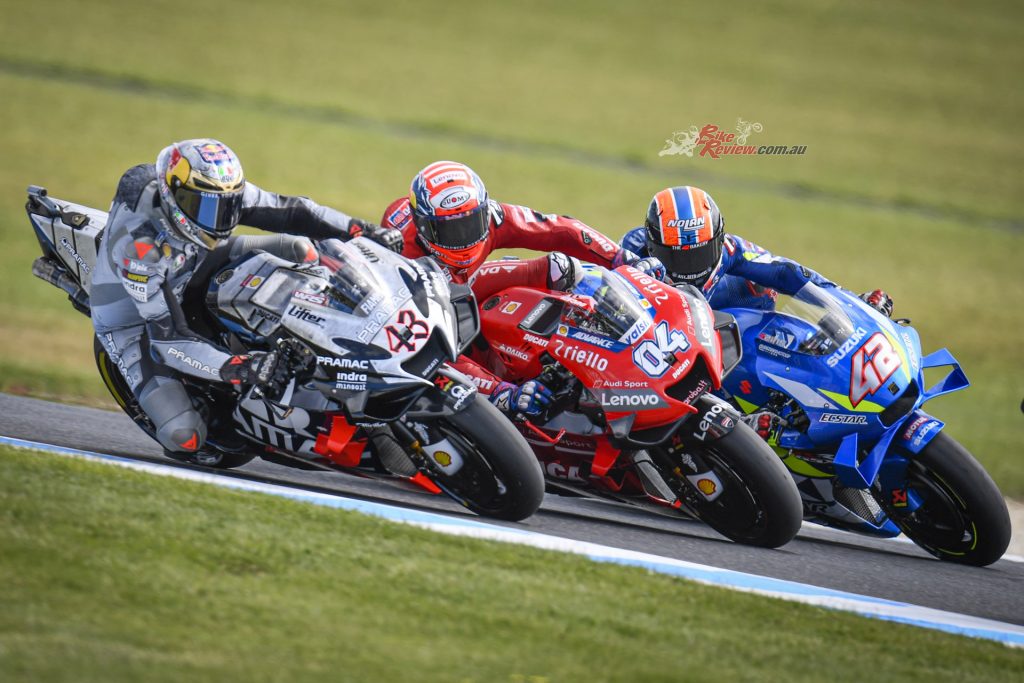 Miller up the inside of Dovi and Rins at the Honda Hairpin.

The LCR Honda Castrol man couldn’t hold the pace of Viñales and Marquez, however, as the two Spaniards were relentless in the lead to pull away. But Crutchlow was far clear of the scrap behind as three Ducatis, two Suzukis, two Aprilias and a Yamaha fought tooth and nail. Rookies Francesco Bagnaia (Pramac Racing) and Joan Mir (Team Suzuki Ecstar) were two impressive performers as they got up in the mix. 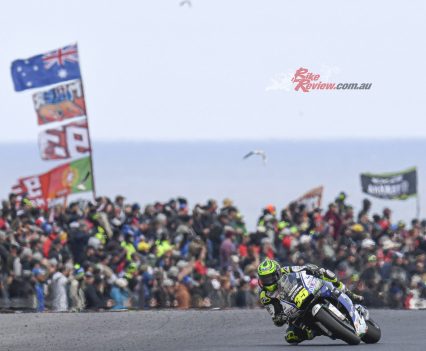 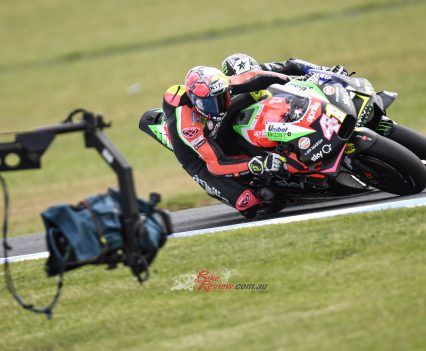 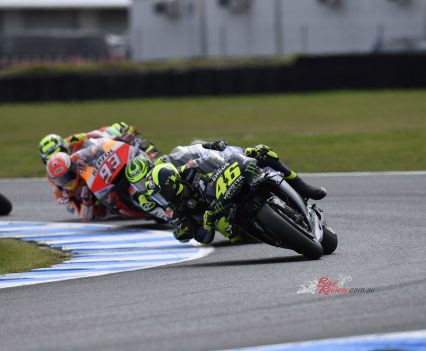 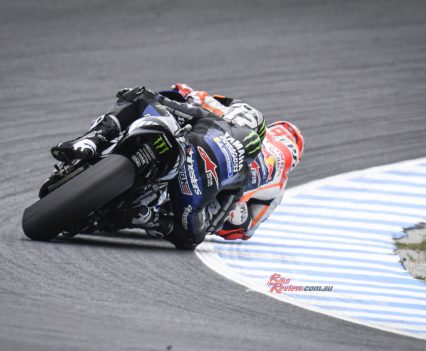 With a handful of laps to go, Marquez was threatening to lead into Turn 1 – and sitting up. As the race rolled on, Marquez kept shying away from a pass, shadowing Viñales around the rest of the lap and waiting for the last. When that came around, there was nothing between the two over the line and the Honda suddenly struck. Viñales was quick around the outside in the hope of gaining the inside line for the Southern Loop, but Marquez shut the door. Next came Honda Corner and no way through, leaving Turn 10 as the likely major overtaking opportunity. And the race would be settled on the drop into 10, but now how we imagined. 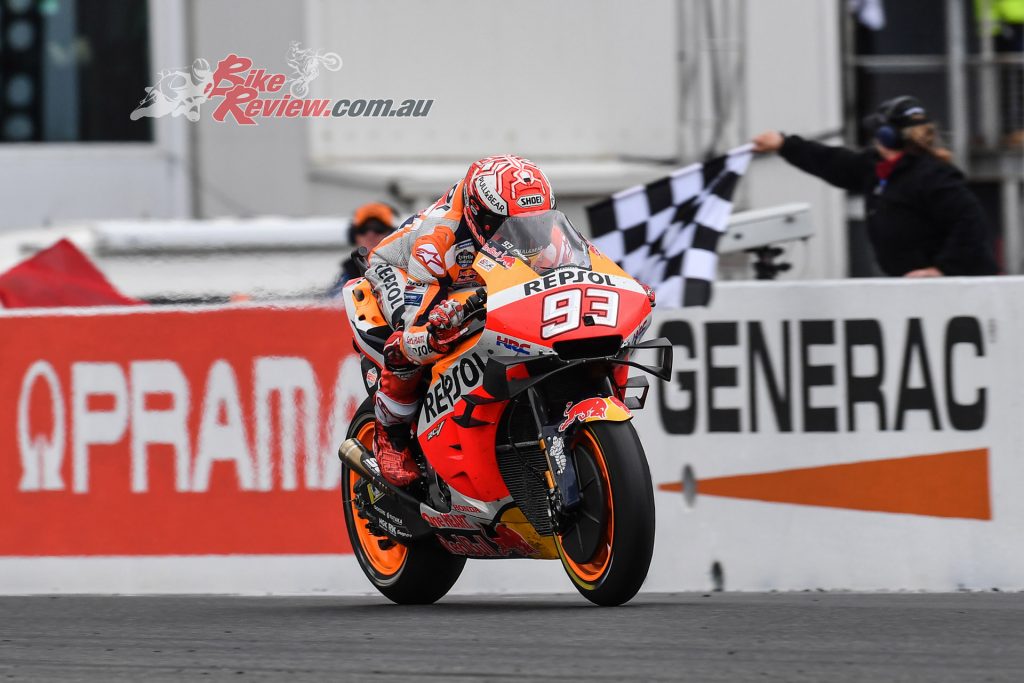 Viñales had already pulled off some sublime moves there, and this time he was equally apid over the crest of Lukey Heights, right on the back of Marquez. But then, drama suddenly struck as it proved too much to ask of the Yamaha and Viñales cascaded out the race and onto the grass, leaving Marquez uncotested to the line.

For the reigning Champion it was victory number 55 of his MotoGP™ career, becoming the most successful Honda rider in the premier class and overtaking Mick Doohan’s record on the MotoGP™ Legend’s home circuit. Viñales’ crash bumped 2016 Australian GP winner Crutchlow into P2, a sensational result for the number 35 after last year’s near-career ending crash at Phillip Island. Meanwhile…

Miller fought himself to the fore of the group battle for P4, which had now become a fight for the podium. On the run to the line, he had to fend off teammate Bagnaia to return an Aussie to the rostrum, apparently with a little inspiration from Ned Kelly. ‘Pecco’ pocketed his best MotoGP™ result in P4,  from P15 on the grid no less, topping off a great weekend for the Pramac team at Pramac Generac-sponsored GP. Fellow rookie Mir also claimed his best premier class result in P5, the Suzuki man holding off the super impressive Iannone as ‘The Maniac’ took his best Aprilia finish and equalled the Noale factory’s best. 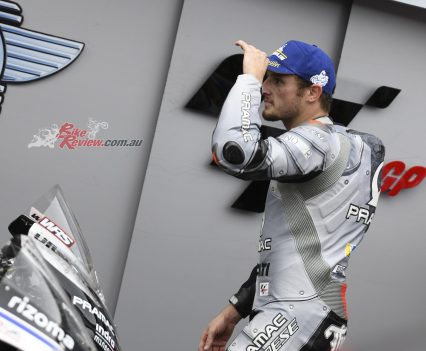 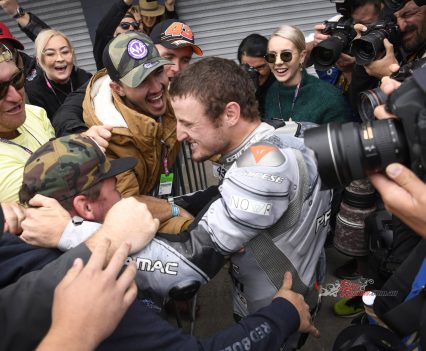 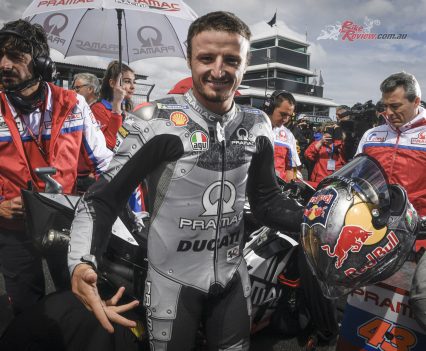 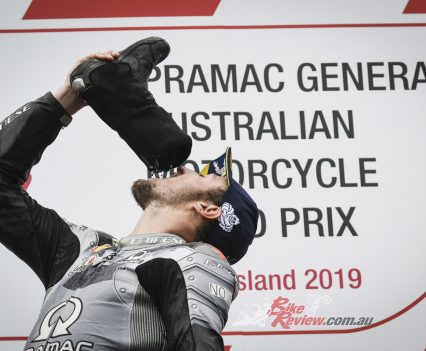 Dovizioso crossed the line in P7 just a whisker behind Iannone, meaning the Team Championship between the Ducati Team and Repsol Honda Team now sits at just one point. Rossi slipped back to eighth in the closing stages, holding off the challenge from Rins and Aleix Espargaro, who completed the top ten. 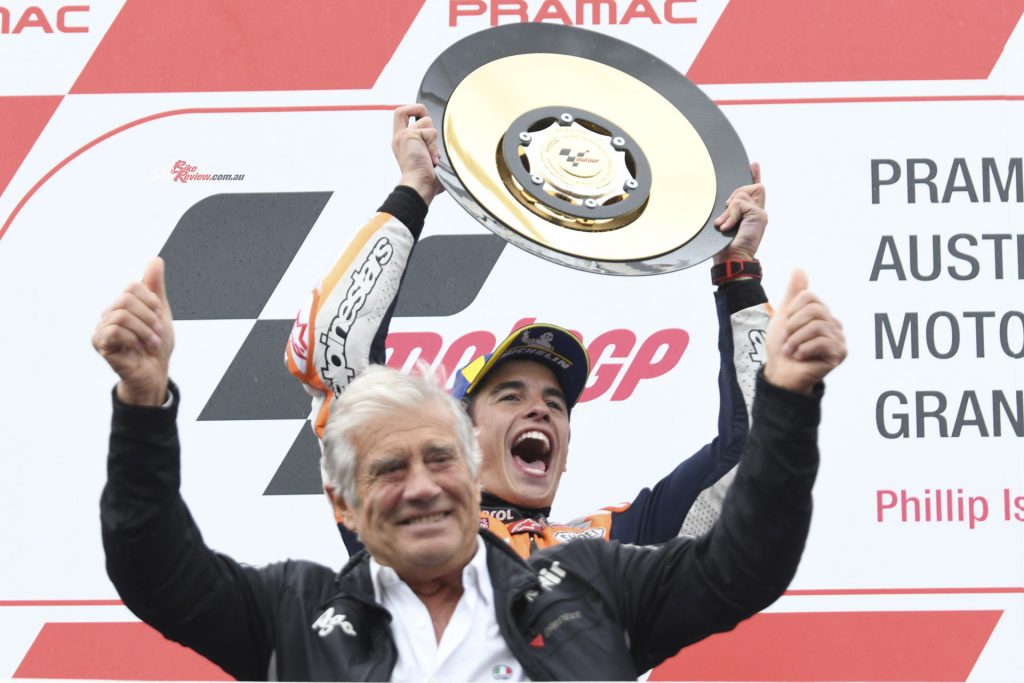 Agostini presented the winning trophy to Marc Marquez at the Island.

Marc Marquez: “Incredible, incredible win because today we weren’t the fastest on the racetrack, Maverick was faster but I was waiting for him. I knew he was the target, I knew he was coming and didn’t start so well so I was waiting for him and when he overtook I tried to follow him and be there. I knew he’d push once he overtook Cal and that’s what he did. It was a strong move when I took Cal but I had to make it because I knew if Maverick had a gap of more than half a second or a little bit more, it would be impossible. So I was using his slipstream, he was so fast in T2 and T3, I was fastest in the last sector and the straight, where we could use our engine. 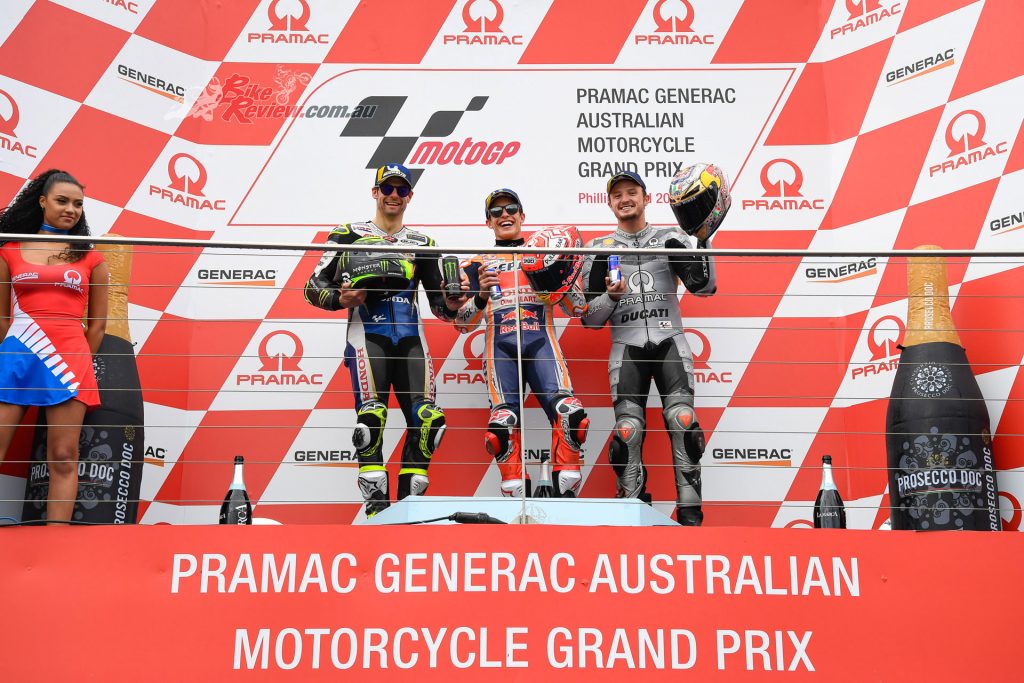 “On the last lap it was my plan to overtake on the straight and then close the door, then I saw it started to rain, especially at Turn 3 and Turn 6, and I thought, ‘what’s going on?!’ but I just tried to brake late. At Turn 10 he’d already overtaken me twice and I knew he would come. I went in so deep, braking hard. I didn’t know he crashed but I think I would have had a second chance. I think I could have overtaken him before the finish line too.

“It was a slow-cooked victory that, we tried to work on the details, all the Repsol Honda Team, and I equalled Mick Doohan in Motegi. Now, I’m the rider with more victories for Honda, which is something incredible. I’m happy, enjoying dreaming this dream. Just enjoy it because you don’t know the future.”