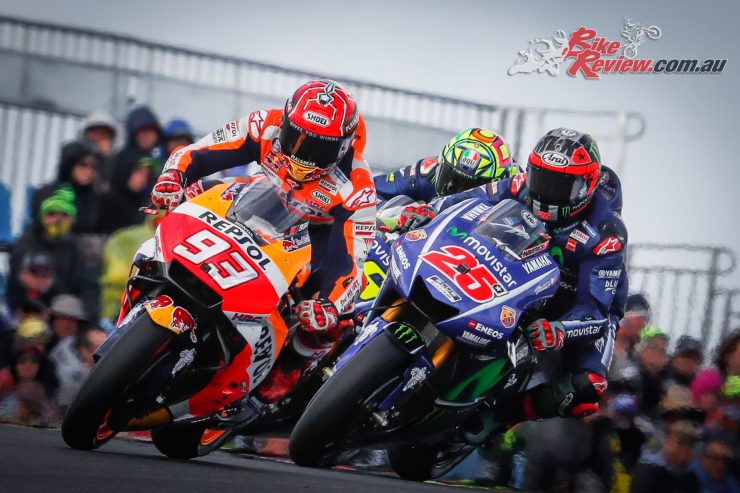 Marc Marquez (Repsol Honda Team) took his sixth win of the year in a scintillating Phillip Island showdown, breaking away from an eight-rider fight for the win in the latter stages to take to the top step.

After a tough race for title rival Andrea Dovizioso (Ducati Team) as the Italian suffered an early run off and was only able to fight back to 13th, it leaves the rider from Cervera now 33 points clear in the standings. Valentino Rossi (Movistar Yamaha MotoGP) took second as he came out on top of a three-way fight for the podium, with teammate Maverick Viñales taking third. Viñales is now out of the Championship fight, 50 points back with two rounds to go. 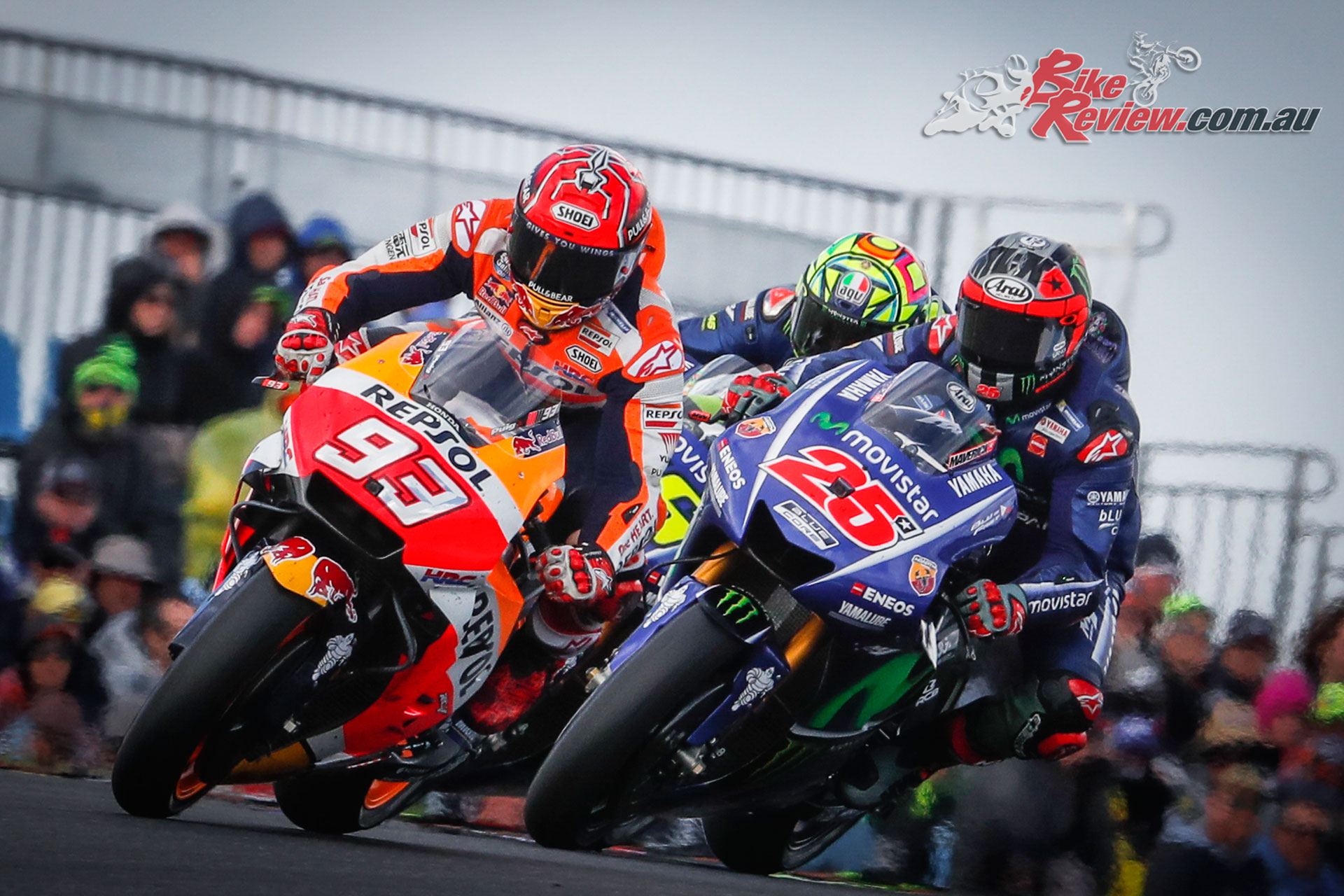 It was Marquez who got the holeshot but he couldn’t hold it into Turn 2 as a stunner from Jack Miller (EG 0,0 Marc VDS) saw the Queenslander slice through into the lead – and then start pulling away. Viñales was the man in third on the chase, as an incredible first lap then took another twist next time round into Turn 1, when Dovizioso went wide and dropped down to P20.

Then the race was on for the Italian, as a seven-rider train at the front closed in on Miller in the lead. Rossi and Viñales were the first to get through, and a lead group of Marquez, Viñales, Rossi, Andrea Iannone (Team Suzuki Ecstar) and Zarco began to fight it out. 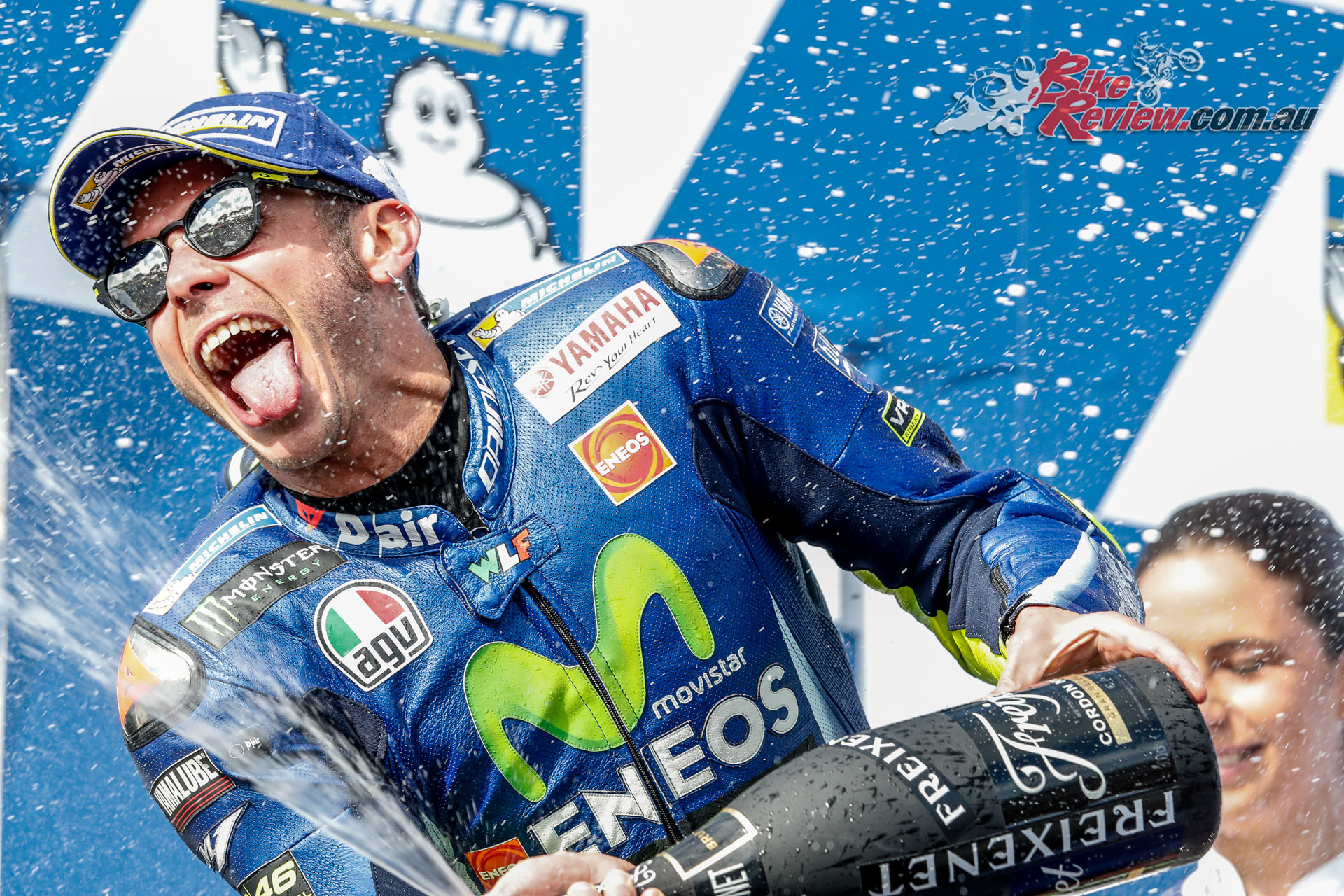 Marquez vs Rossi, Zarco vs Rossi, Viñales vs Marquez, Iannone vs Zarco…in one of the most aggressive and hard-fought battles of the season, decade or more, the passes came thick and fast – including a move for Zarco around the outside of Doohan corner – as rubber was left on the road; a little on opponents’ leathers and a little paint was swapped in one of the most incredible fights in history.

Once Marquez was ahead, however, the reigning Champion was able to begin pulling a gap with five laps to go. Pulling the pin as the battle raged on behind him, the number 93 began to sprint away – and the fight to complete the podium was down to three by the final laps: Rossi vs Viñales vs Zarco. 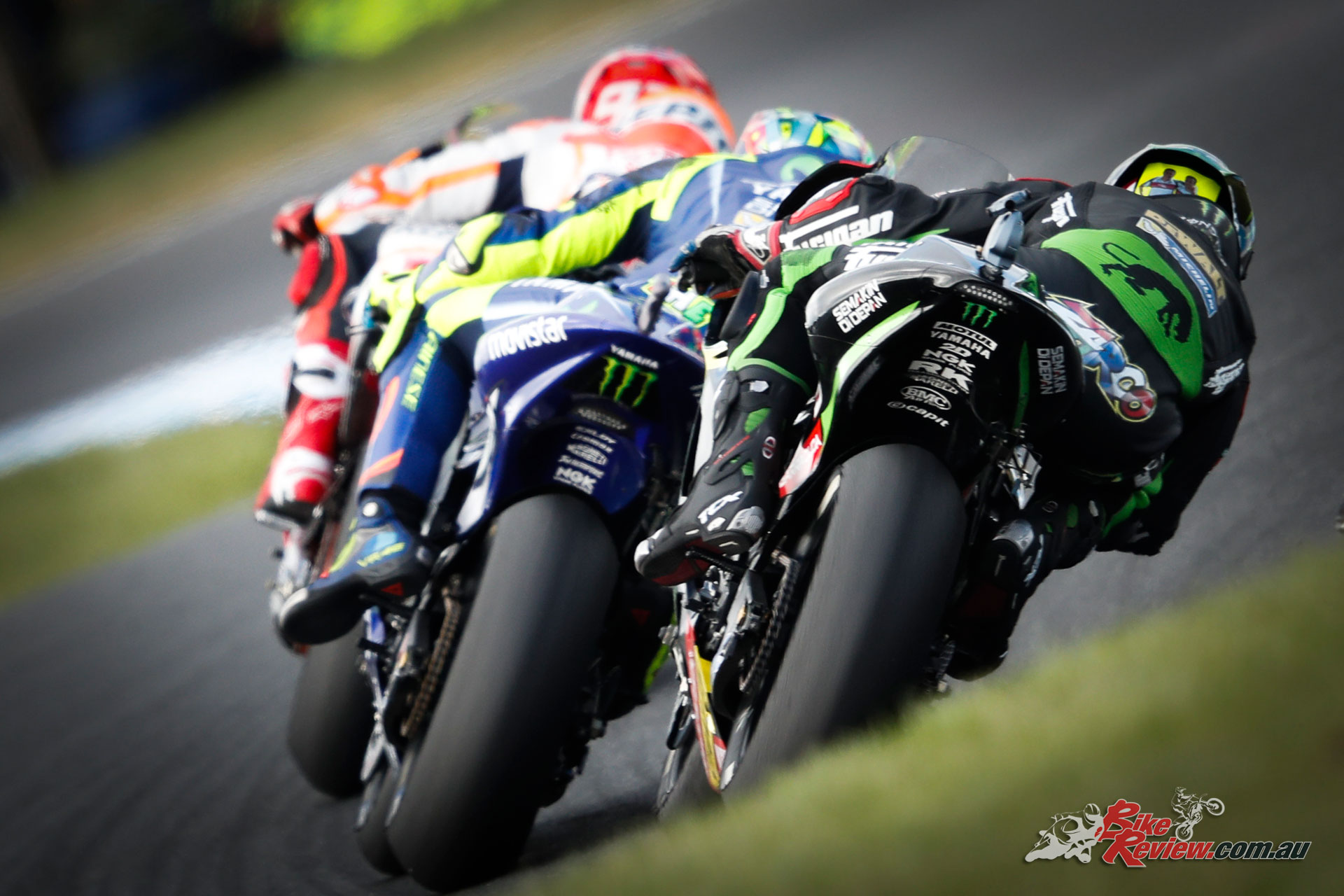 With some of the tightest lines ever ridden around the Island at times on that final lap, Rossi was able to take it – but all three were almost neck and neck over the line. And over that line behind the nine-time World Champion, it was Viñales just edging ahead of the Tech 3 of the Frenchman – taking third for a return to the rostrum but a definite end to his chance at the title. Zarco’s fourth, however, confirmed him as Rookie of the Year. 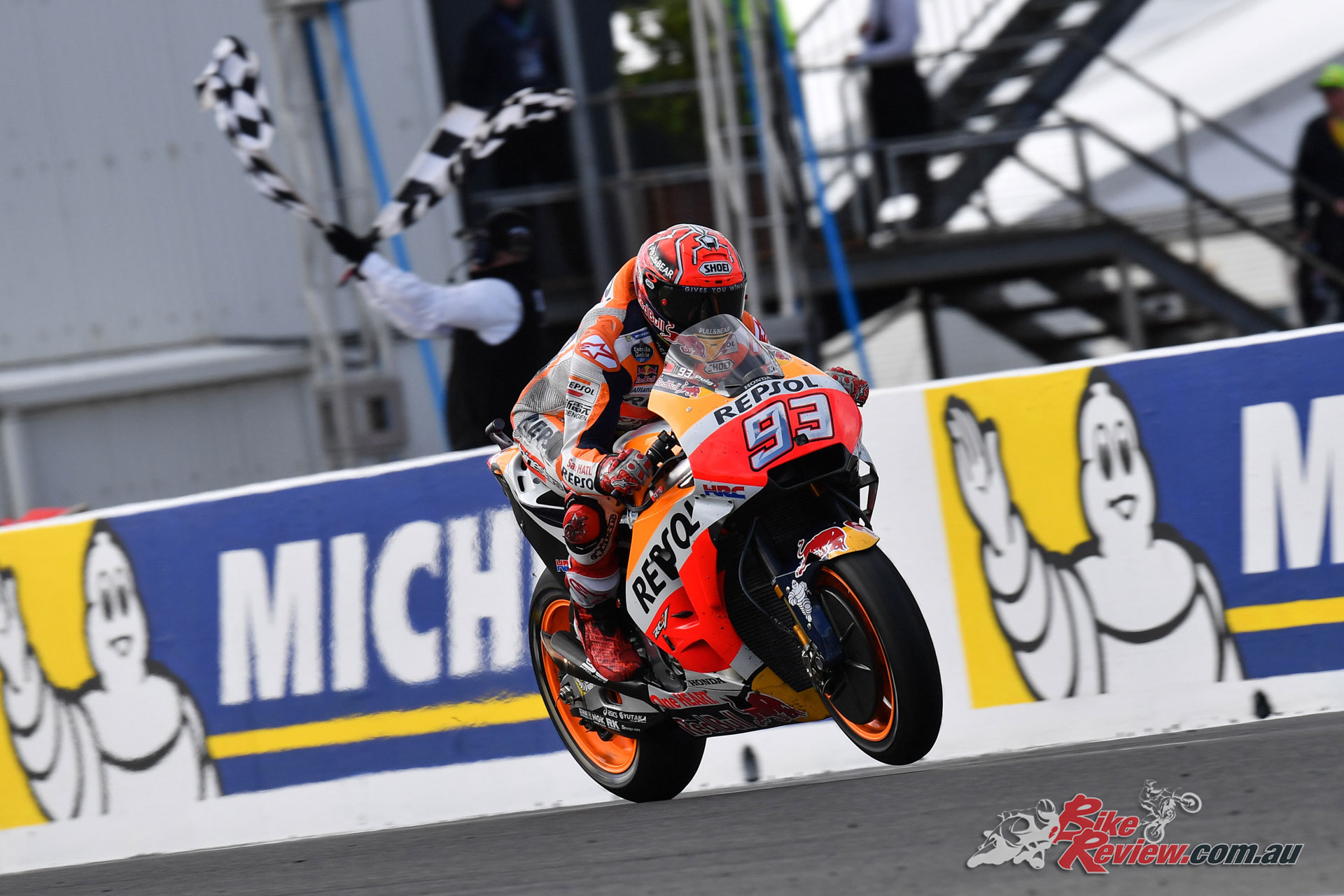 Sepang is now ready for business, with the next round soon on the horizon and 33 points swinging the pendulum in Marquez’ favour. But not everything goes to script, as Dovizioso found out at the Island – and the Italian won at Sepang last season. It’s time for a final stand.

Moto2: Oliveira bolted at the front

Stunning first win for the Austrian factory, and a first win for Portugal in the intermediate class
Miguel Oliveira (Red Bull KTM Ajo) was in a class of his own in the Australian GP, taking victory by three seconds – the gap having been as high as six – and crossing the line to take KTM’s first win in Moto2. 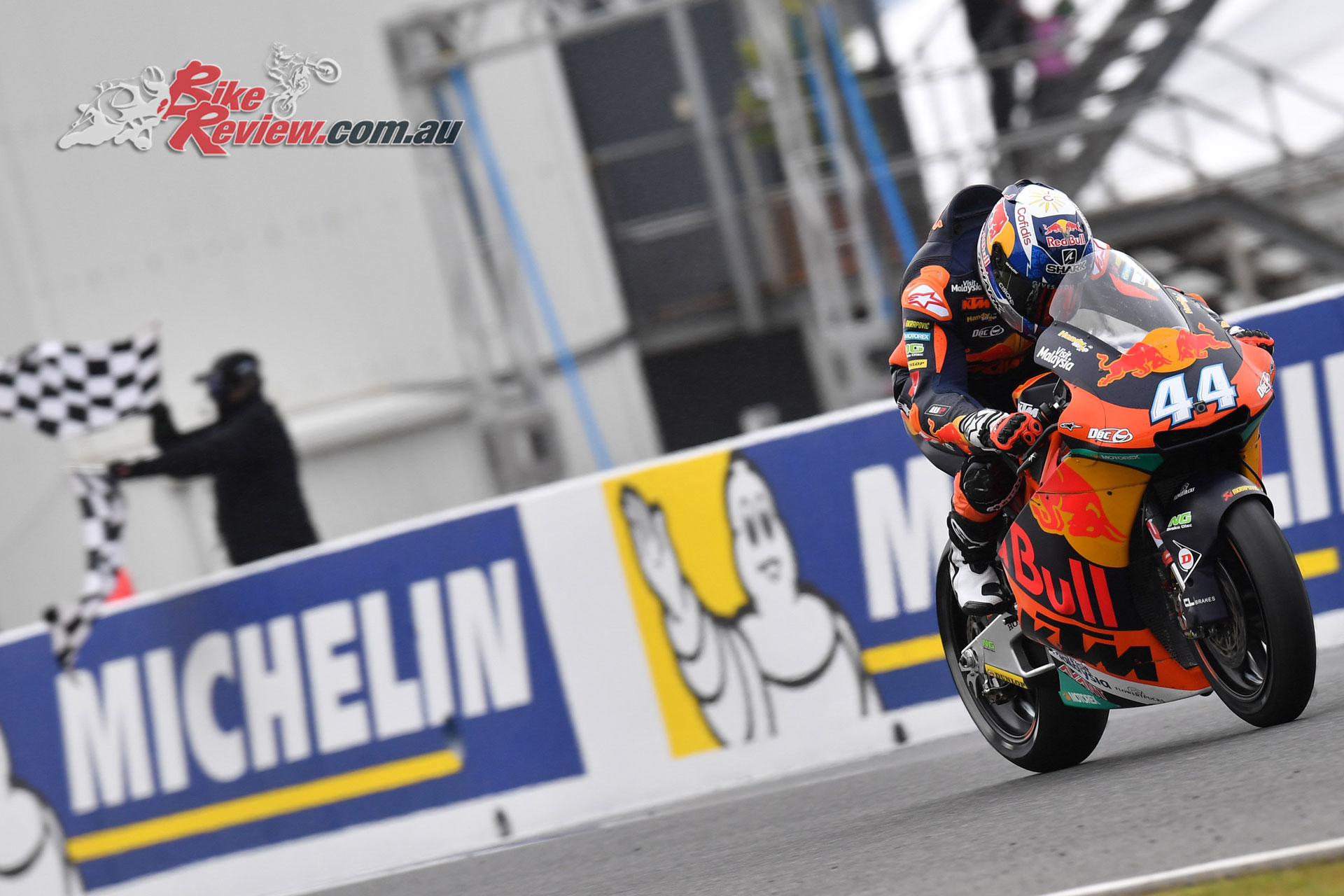 The history making continued in second, as teammate Brad Binder took his first ever podium in the intermediate class as his rookie year gains traction following a tough, injury-hit start to the season. Franco Morbidelli (EG 0,0 Marc VDS) took third and protected his title hopes, making good gains in the standings on key rival Tom Lüthi (CarXpert Interwetten), who had a tough day to come home tenth.

Off the line it was Oliveira who took the holeshot, with polesitter Mattia Pasini (Italtrans Racing Team) losing out and Binder moving up into second. Morbidelli slotted into third, with Dominique Aegerter (Kiefer Racing) moving into fourth. Lüthi got a good start and shot up into sixth, moving around the outside as he attempted to get in the fight at the front.

The pack then started to shuffle, and a crash for Marcel Schrötter (Dynavolt Intact GP) collected Pasini and sent Aegerter wide – as Oliveira started pulling away at the front. Alex Marquez (EG 0,0 Marc VDS) suffered a big moment, and Lüthi began to struggle – as the top trio of Oliveira, Binder and Morbidelli found themselves in clear air. Oliveira had an advantage of six seconds with seven laps to go.

Takaaki Nakagami (Idemitsu Honda Team Asia) was the rider on the charge mid-race, moving up and then into podium contention before passing both Binder and Morbidelli. The South African and the Italian exchanged some tough passes and spectacular moves, before then the rain flag came out near the end of the race and Nakagami slid out ahead of the duo. Oliveira crossed the line almost three seconds clear, with Binder setting the fastest lap on the penultimate lap to take second and Morbidelli a safe third.

Jesko Raffin (Garage Plus Interwetten) put in an impressive performance for fourth, ahead of another top ride from Motegi podium finisher Xavi Vierge (Tech 3 Racing). Alex Marquez recovered from his moment early in the race to pull clear of a number of riders and take sixth, ahead of Simone Corsi (Speed Up Racing), Aegerter, a solid ride from Sandro Cortese (Dynavolt Intact GP) and Lüthi.

The advantage is now 29 points for Morbidelli at the top, giving him his first shot at the title at Sepang International Circuit, which is up next. 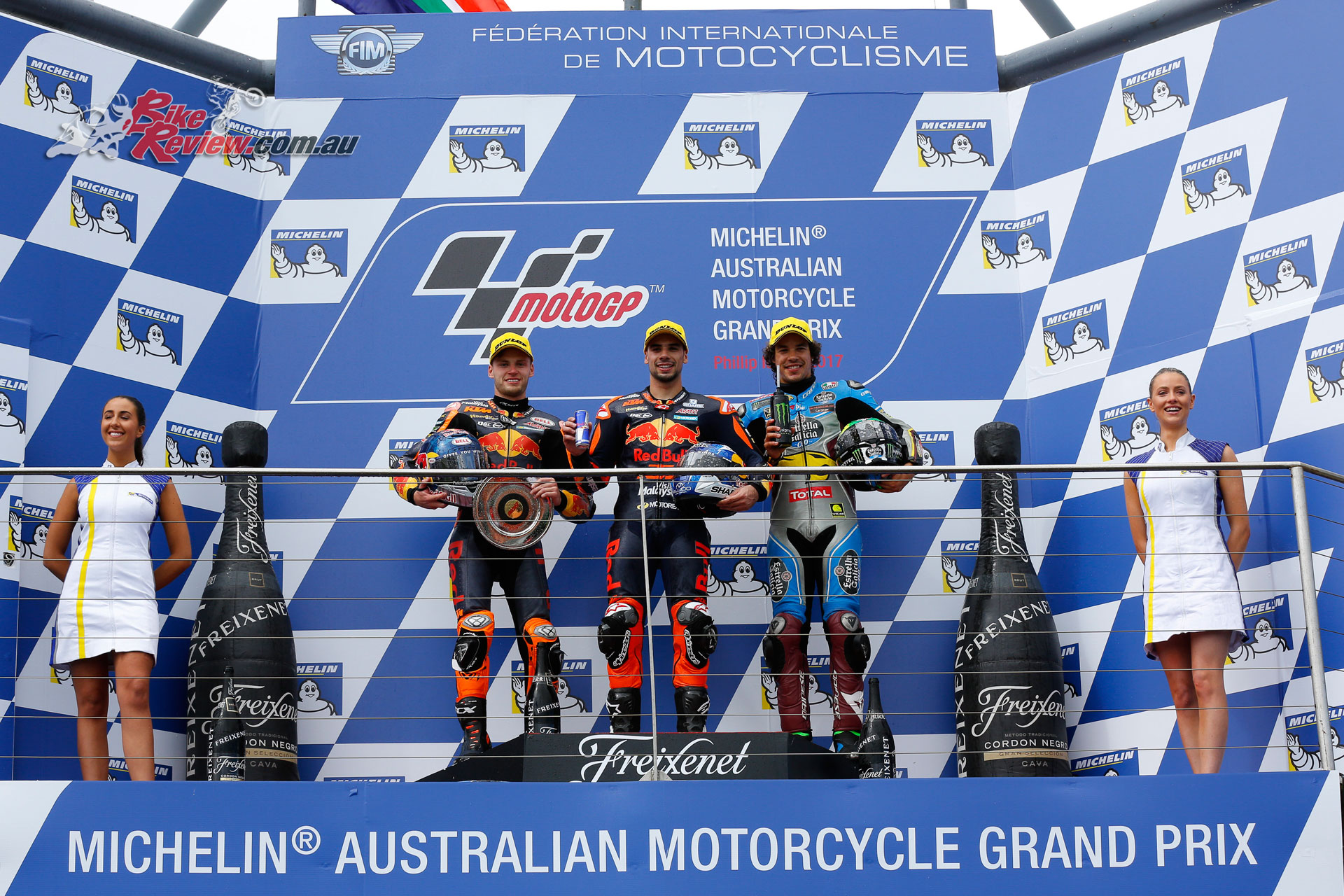 Joan Mir (Leopard Racing) is the 2017 Moto3 World Champion after winning his ninth race of the season in the Australian GP, equaling another record on the way to taking the crown in a closely fought race that was Red Flagged as the weather came in. Teammate Livio Loi followed him over the line in second as he took an impressive podium on the comeback from injury, with polesitter Jorge Martin (Del Conca Gresini Moto3) completing the top three. 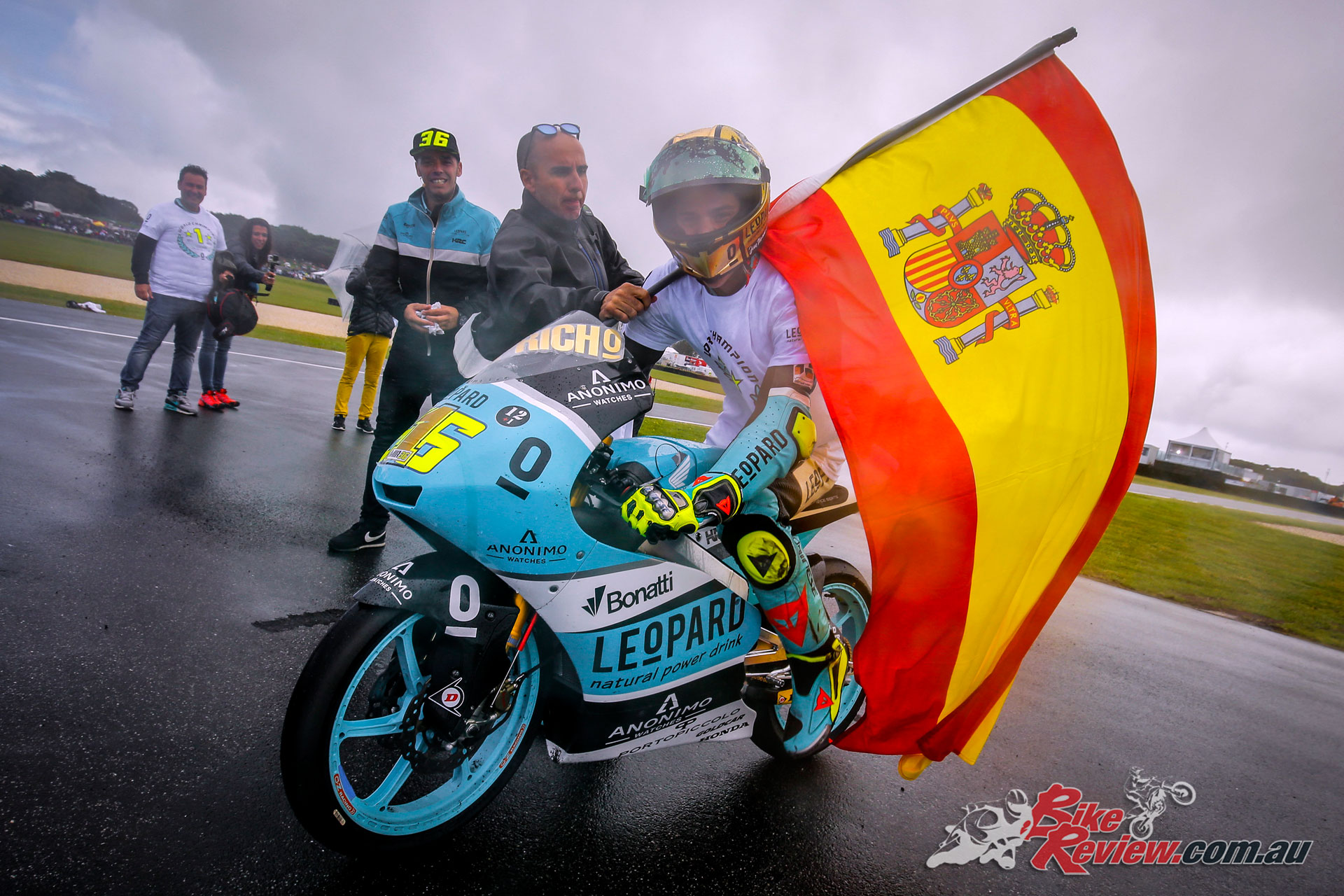 Off the line it was Gabriel Rodrigo (RBA BOE Racing Team) who got through Turn 1 first, before Jorge Martin fought back – and the battle began. With a long freight train at the front, the racing was hard but fair, and the slipstream down the Gardner Straight created some spectacular side-by-side action into Turn 1.

Fenati – fighting to keep his title hopes alive – took his turn at the front for a number of laps, before key rival Mir began to make his move. Shuffling into Turn 1 then saw another name fall from the fight at the front, with Martin and Ramirez getting a little too close for comfort and the Platinum Bay Real Estate rider forced wide – and then going down.

Back at the front, Mir was pushing on. Making it to the front and then pushing to try and break free of the slipstream, the Majorcan was able to keep just ahead of the game for a number of laps – until some spots of rain started to appear. Suddenly, the heavens opened – and with 2/3 race distance done, the Red Flag that came out marked the end of the race.

The result was counted back to the last full lap completed by the entirety of the field – and across the line, it was the Championship leader who had been in first. Initially unaware as the grid slowed and the Majorcan looked to the screens around the track for confirmation, Mir then realised he’d gone from World Champion elect to 2017 Moto3™ World Champion in taking the tenth win of his career and once more becoming the Moto3™ rider with the most wins – equal with Fenati.

The good news didn’t stop there for Leopard Racing, as the new World Champion’s teammate Livio Loi crossed the line in second for his second ever rostrum finish – and from outside the top twenty on the grid, with Martin completing the podium. Gabriel Rodrigo equaled his best ever result in P4, ahead of Enea Bastianini and Romano Fenati.

Two races remain for Mir to break more records before he moves up to Moto2 for 2018 – with the next stop Malaysia. 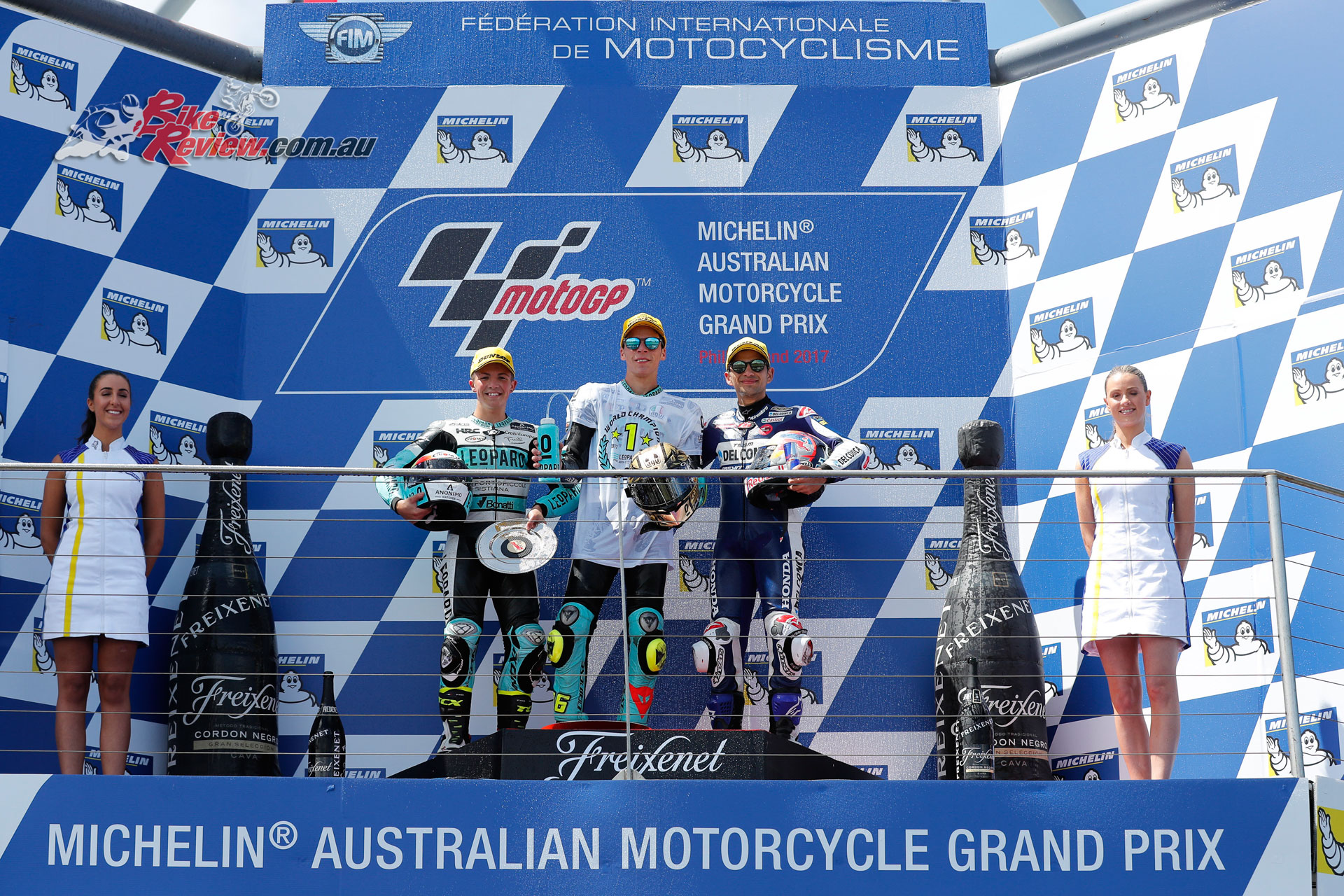