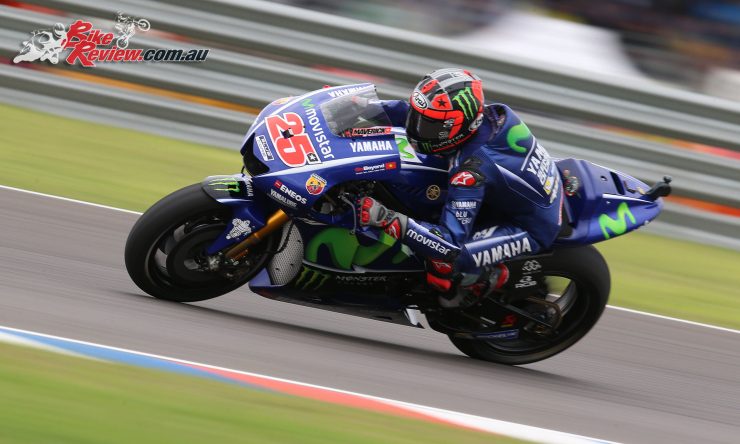 MotoGP has a tendency to keep making history of late, and the Gran Premio Motul de la Republica Argentina was no different as Maverick Viñales (Movistar Yamaha MotoGP) became the first Yamaha rider since Wayne Rainey in 1990 to win the first two races of the year, taking a stunning victory as drama hit the grid behind. 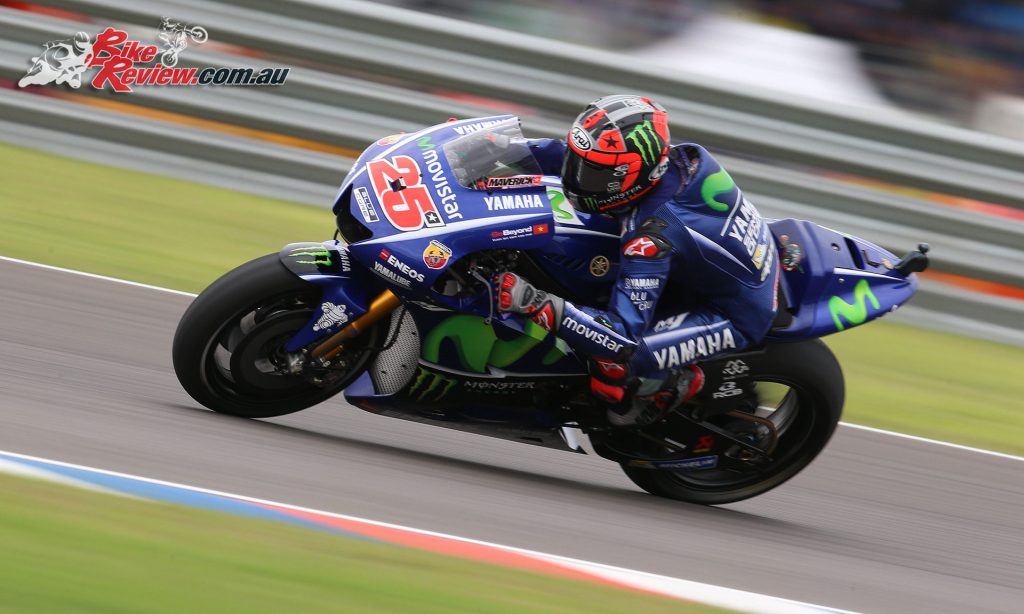 It was reigning Champion Marc Marquez (Repsol Honda Team) who leapt into the lead from pole, with Rossi another electric starter from seventh on the grid. In the rush for Turn 1, Marquez led Crutchlow as the pack shuffled behind, with the reigning Champion then making a stunning break for it as the Brit backed up the chasing Movistar Yamaha MotoGP pairing of Viñales and Rossi. 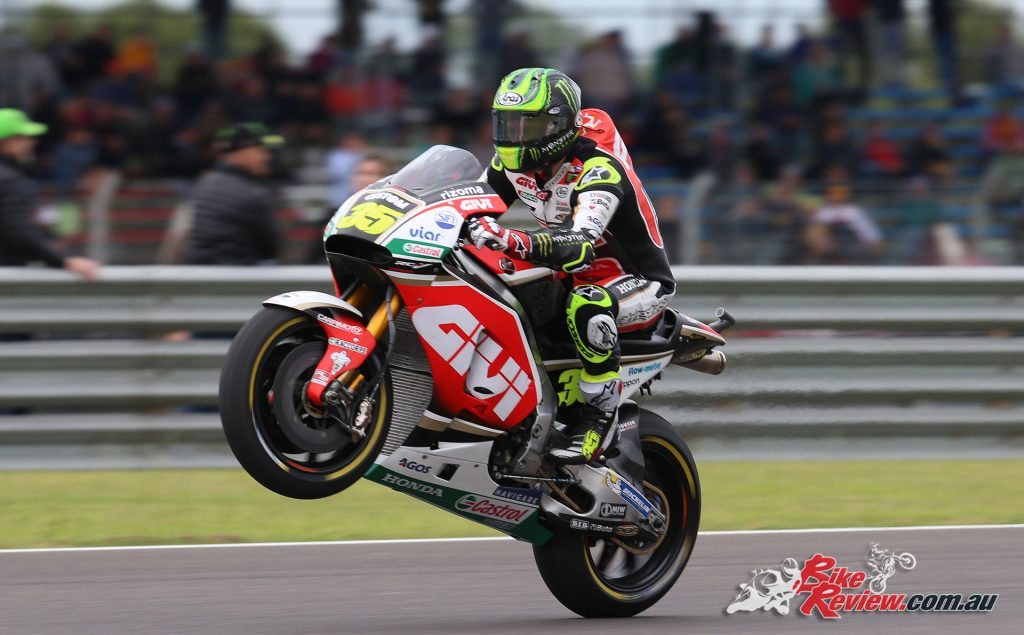 Viñales soon attacked Crutchlow to take P2, before the first of the high drama hit up ahead and Marquez suddenly hit the floor at Turn 2 – having been almost two seconds clear.

That left Viñales in the lead with Crutchlow and Rossi on the chase, the gap holding steady just above half a second – before the man of the moment began to pull away. The ‘Doctor’ was left to hunt down Crutchlow, with the two holding station until Rossi struck with 7 laps to go, getting past the Brit in style at Turn 5 and pulling away for a second consecutive podium in his 350th World Championship start. 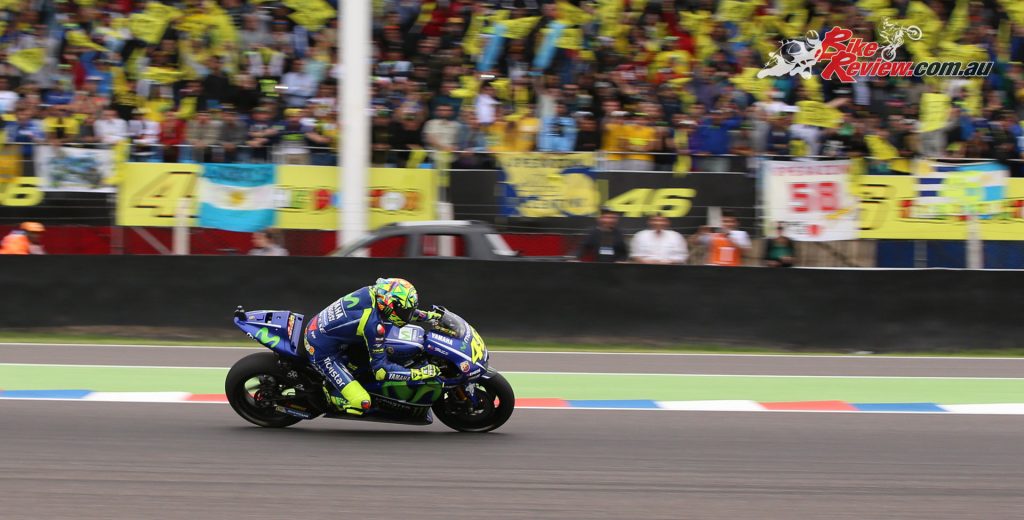 After a short and spectacular duel between Pedrosa and Zarco, the Spaniard broke free to set the fastest lap – before disaster struck for the ‘Baby Samurai’ as he crashed out of the race in the same place as teammate Marquez had done a handful of laps earlier.

Even then, the drama wasn’t done as ‘DesmoDovi’ went wide at Turn 5 soon after, with Aleix Espargaro (Aprilia Racing Team Gresini) taking the inside line and then losing the front – sliding helplessly into the Italian and both out the race.

Behind Crutchlow, it was another fantastic day for the Independent Teams as the dust settled, with Bautista taking fourth and Monster Yamaha Tech 3 rookies Zarco and Jonas Folger taking fifth and sixth. Petrucci, after running out of rear grip, crossed the line in a solid P7 – ahead of a good fight back from his teammate Scott Redding at the head of the next group. 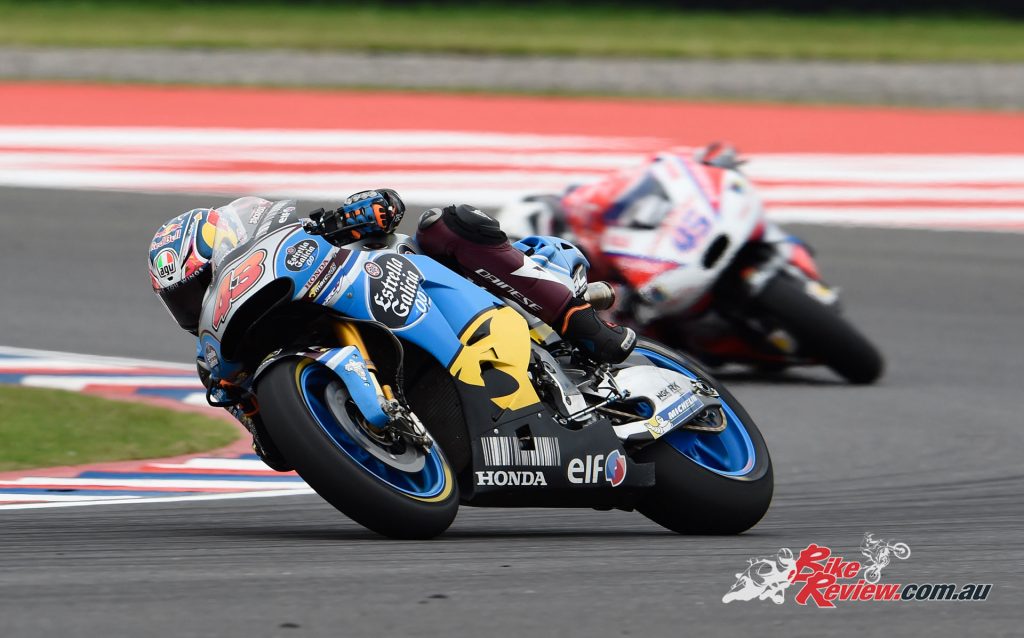 Tito Rabat (EG 0,0 Marc VDS) was P12 in front of Hector Barbera (Reale Avintia Racing), with Red Bull KTM Factory Racing pairing Pol Espargaro and Bradley Smith incredibly close to the two men ahead in P14 and P15 respectively. The Austrian manufacturer is now a points scorer with both riders, opening their account early in only round two.

After a great start from a difficult grid position, it was disaster for Ducati Team’s Jorge Lorenzo on the first lap as the five-time World Champion crashed out early after contact with old nemesis Andrea Iannone (Team Suzuki Ecstar) – the ‘Spartan’ thankfully escaping unhurt, and Iannone continuing.

The ‘Maniac’ was also given a ride through penalty soon after for a jump start, dropping him down the order and out of contention to cross the line as the final finisher.

Austin, Texas now awaits – a chance for Marquez to strike back at a venue he has always ruled, and a chance for Viñales to change that statistic as we head into round three. 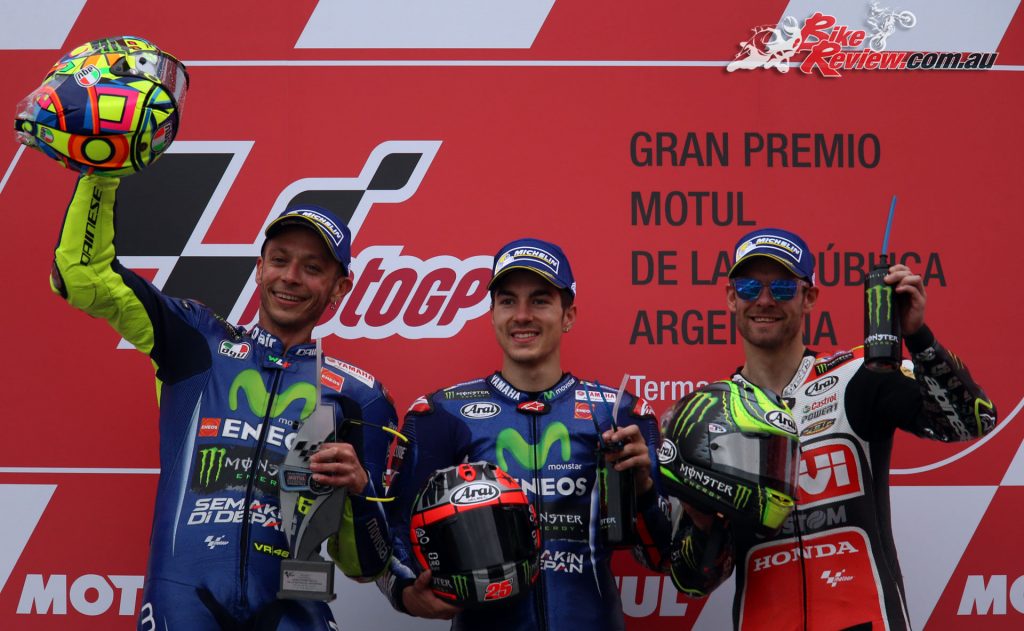 It was an EG 0,0 Marc VDS duel at the front in Argentina won under intense pressure by Franco Morbidelli, as teammate Alex Marquez crashed in final lap drama as he pushed to catch the Championship leader. Polesitter Miguel Oliveira (Red Bull KTM Ajo) took an impressive first podium for the new intermediate class KTM chassis as he crossed the line in second after Marquez’ crash, with Qatar podium finisher Tom Lüthi (CarXpert Interwetten) taking third after another signature solid ride. 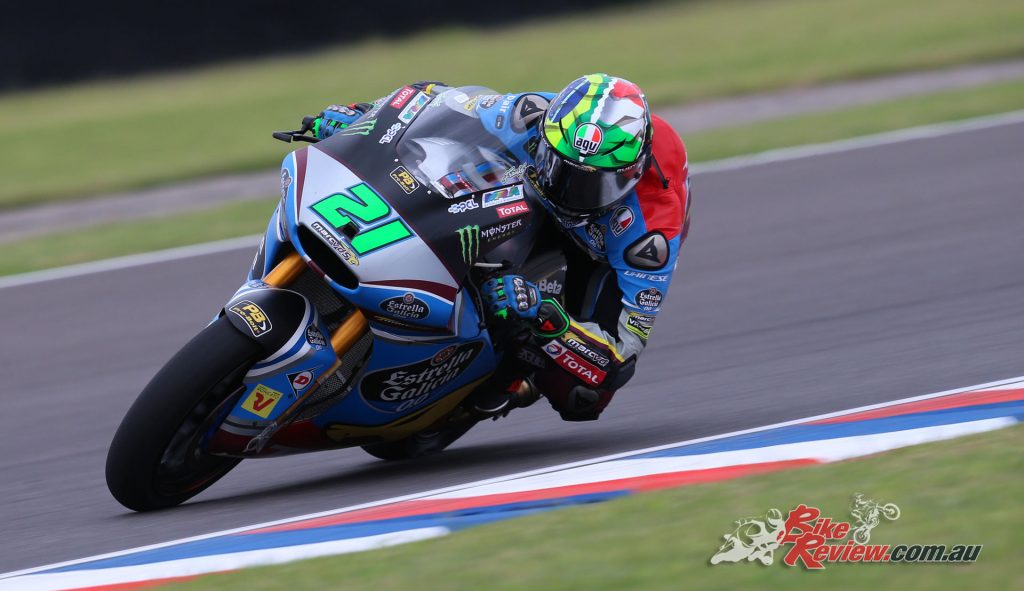 It was Morbidelli who got the holeshot, with the front row shuffling for position until the two Estrella Galicia 0,0 Marc VDS riders began to pull away and Morbidelli stoked up a lead. Marquez stayed on the chase, however, closing in steadily until dueling it out with a handful of laps to go.

Fended off and settling back into second, the rider from Cervera put in the work to close in on the final lap once again – before dramatically high-siding out behind his teammate. Marquez picked himself up and made it to the line, finally finishing the race outside the points.

Oliveira avoided the incident to take an impressive first podium in Moto2 for the Portuguese rider and first ever for the KTM chassis, with Lüthi the man to gain big from the drama up ahead as he took his second podium of the year in P3. Another expected key title contender, Takaaki Nakagami (Idemitsu Honda Team Asia) suffered opposite fortunes, as the Japanese rider crashed out early on.

Behind the drama up front, fourth was a solid ride from Forward Racing Team’s Lorenzo Baldassarri, with Tech 3 Racing’s Xavi Vierge impressing to complete the top five just ahead of Italian veteran Simone Corsi (Speed Up Racing).

Francesco Bagnaia (Sky Racing Team VR46) was top rookie in P7 in a tight midfield, just beating Dynavolt Intact GP rider Sandro Cortese to the line. There was another incredible rookie performance in ninth as reigning Moto3™ World Champion Brad Binder put in a stunner, still suffering with an arm injury and making it up from outside the top 20 on the grid.

The intermediate class now head for Austin, Texas, for the third round of the year. 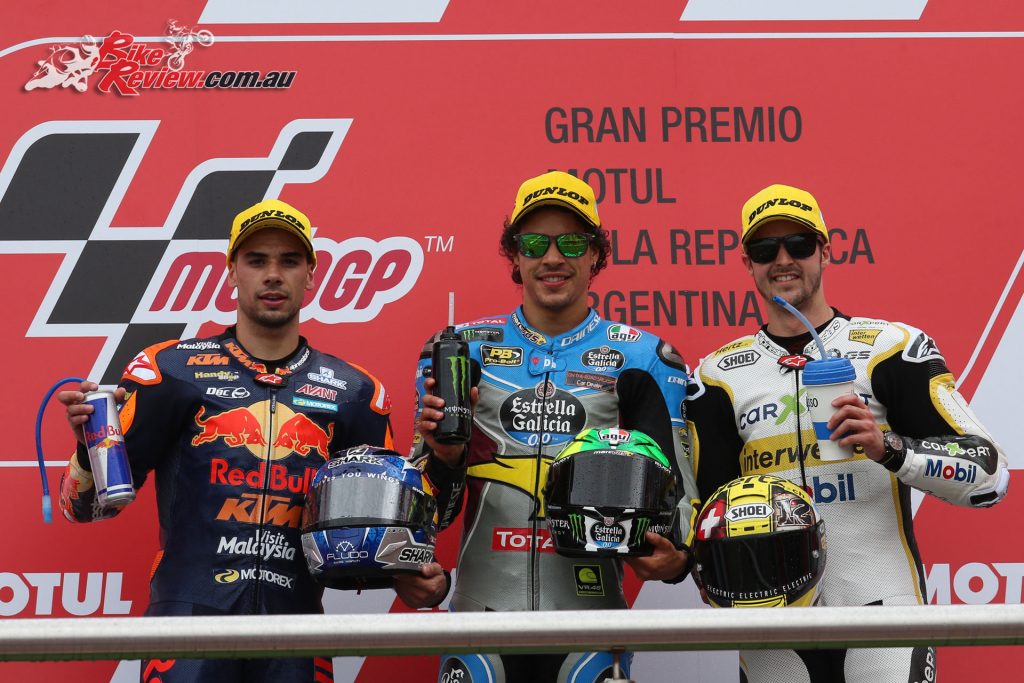 Joan Mir (Leopard Racing) has taken victory in the Gran Premio Motul de la Republica Argentina for his second race win in a row, staging a stunning comeback from P16 to survive a last lap attack from British Talent Team rider John McPhee – with Jorge Martin (Del Conca Gresini Moto3) completing the podium as the three rostrum finishers in Qatar proved a cut above in another classic Moto3 battle. 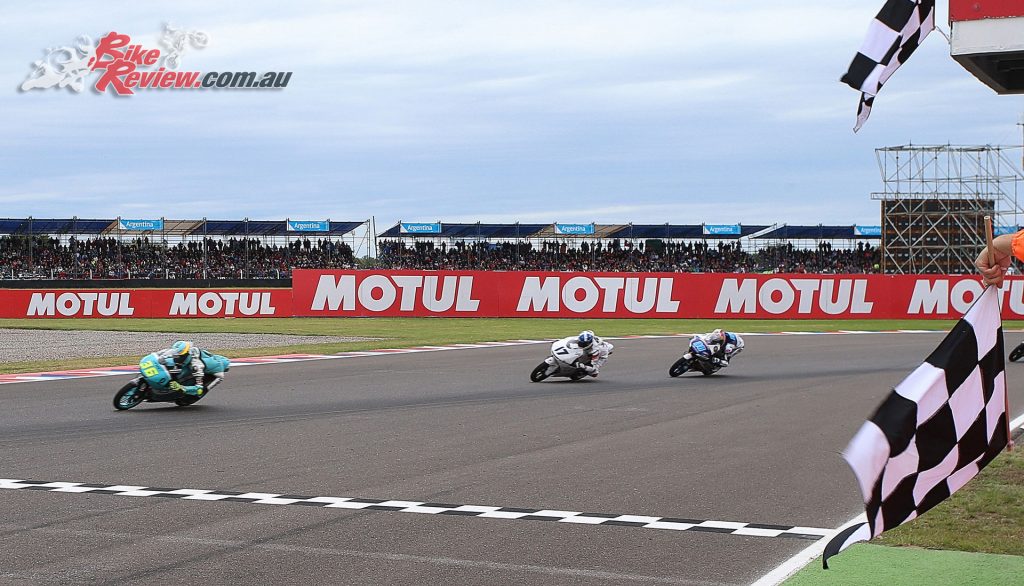 It was Martin who took the lead off the line from polesitter McPhee, as the two men capitalized the best on their grid positions and Nicolo Bulega (Sky Racing Team VR46) got a little bogged down off the line.

Romano Fenati (Marinelli Rivacold Snipers) was a big loser as the lights went out, then making contact with compatriot Niccolo Antonelli on the fight back – with the Red Bull KTM Ajo rider retiring as a result and Fenati left with a mountain to climb.

Already climbing his own mountain was Mir, as the Leopard rider made serious progress up from his P16 starting position to get into the front group. That group soon settled into the classic Moto3 freight train, with lead positions changing between Martin and teammate Fabio Di Giannantonio, McPhee, Aron Canet (Estrella Galicia 0,0), Philipp Oettl (Südmetall Schedl GP Racing) and Bulega as Qatar GP winner Mir arrived on the scene.

As the pack shuffled, the lead group of five began to pull away, with Mir leading McPhee, Martin, Oettl and Andrea Migno (Sky Racing Team VR46); soon clear at the front and ready for a final showdown.

In the end, it all came down to Turns 13 and 14 on the final lap, as Mir tried to create a gap and was reeled in once again by McPhee – with the Brit just unable to find his way past in the final corners. Martin completed the podium after proving just a little too far back for a final attack, with Oettl beating Migno to P4.

Livio Loi (Leopard Racing), a comeback from Fenati, an incredible ride from Tatsuki Suzuki (SIC58 Squadra Corse) and a solid result for Juanfran Guevara (RBA BOE Racing) fought it out to take P6 to P9 respectively, ahead of a stunner from rookie and former Asia Talent Cup Champion Kaito Toba (Honda Team Asia) to complete the top ten.

Home hero Gabriel Rodrigo (RBA BOE Racing) put in a stunning effort to fight in the lead group before a crash, coming back from a collarbone break in FP1 in Qatar. Also falling out of contention soon after were Di Giannantonio – tagged by Bulega – and 2016 Championship runner up Enea Bastianini (Estrella Galicia 0,0), both riders ok and ‘Bestia’ able to pick it up and continue.

Next up is Texas and the Circuit of the Americas in two weeks – with the top of the title standings as you were and Mir staking a serious early claim on the crown. 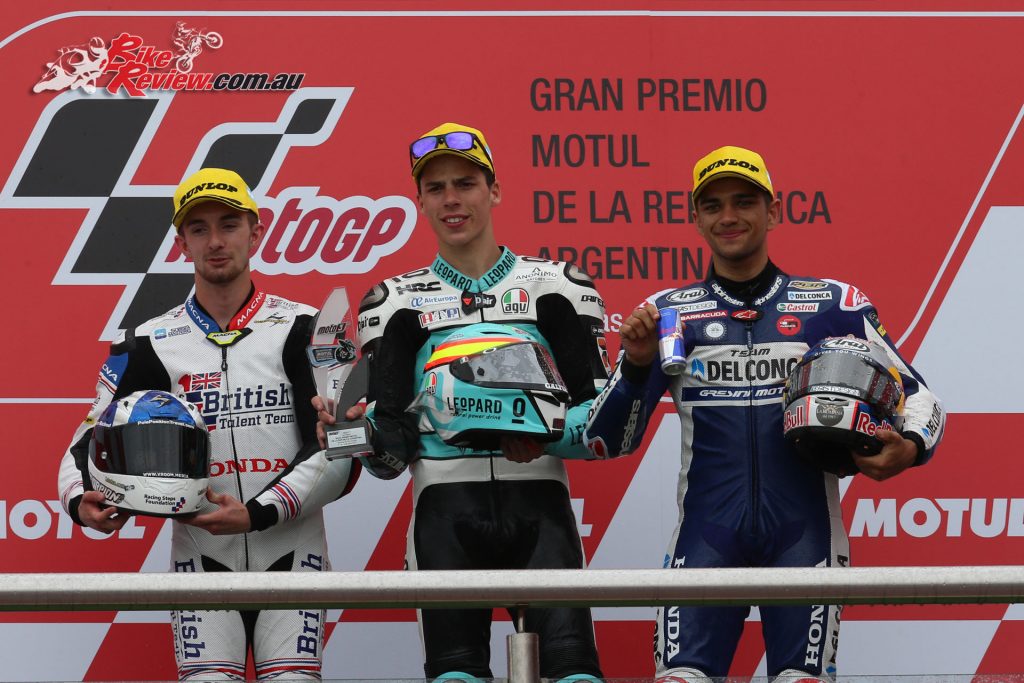