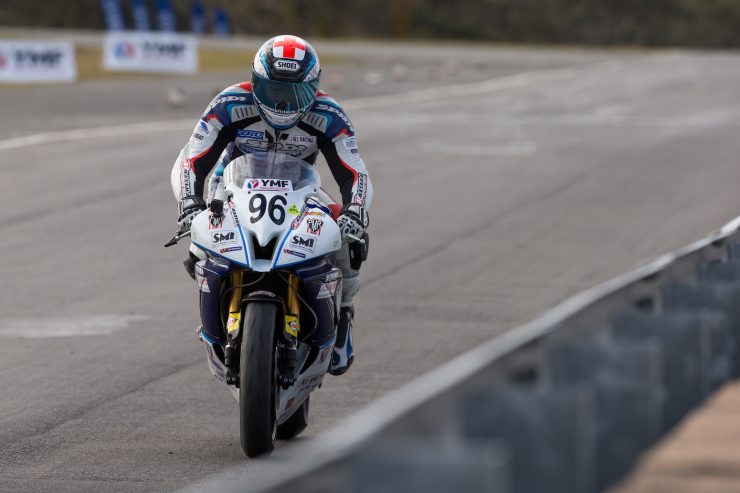 Luke Mitchell has raced his JNL Racing Yamaha machine to an overall victory, at Round 5 of the 2016 Yamaha Motor Finance Australian Superbike Championship presented by Motul Pirelli at Morgan Park Raceway in Queensland today.

The Motul Supersport class were treated to a full house of spectators when racing commenced in the sunshine today, and with JNL Racing Yamaha’s Mitchell and Banham WA Racing’s Sam Clarke proving yesterday that they were the men to beat, the action on track did not disappoint.

When bikes left the grid for race one, Mitchell’s start from pole position after qualifying fastest served him well, moving in to the early race lead as bikes headed in to turn one, but just over Mitchell’s right shoulder Clarke’s Kawasaki was hot on his tail, and by the time the field headed in to lap two, Clarke was the new race leader.

With Clarke out in front, the next fight on track was between Graffiti Alley Racing’s Troy Guenther and Cube Racing’s Callum Spriggs, who were going head to head for third position, and by lap five Spriggs had made the pass, slotting up into third position behind Mitchell.

By lap six, the front three riders began to bunch up, Clarke, Mitchell, and Spriggs all keeping tons of spectators on the edge of their seats.

With five laps remaining, the running order saw Clarke continuing to lead from Mitchell, while Guenther returned to third position due to Spriggs suffering a crash in turn ten forcing him to DNF.

Unfortunately for Guenther, third place was only a position he occupied for a short time, with Coopers Pale Ale Yamaha’s Chris Quinn taking advantage of a late charge, and moving up into third place with only a few laps remaining. 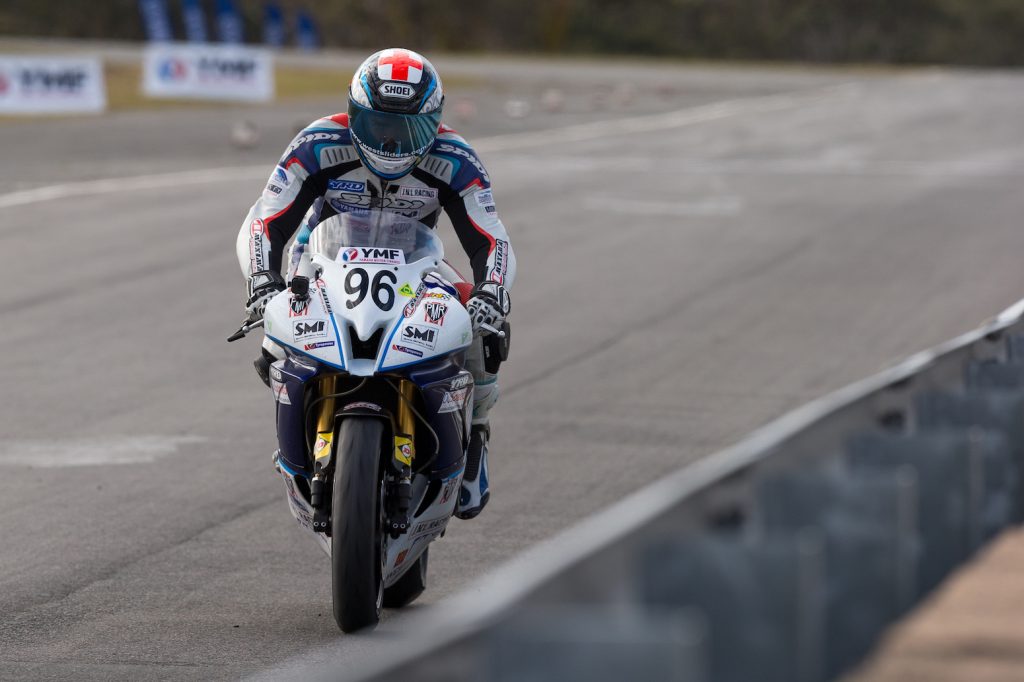 But it was on the final lap that all of the action played out. With only a short time to get the job done, Mitchell made one final attempt for the race lead, one which paid off. And as riders came on to the straight for the final time, it was Mitchell who crossed the line as the Motul Supersport race one winner, followed by Clarke in second, and Quinn in third.

With vital championship points up for grabs, when the Motul Supersport competitors lined up again for race two, spectators watched on, hoping that they would see Mitchell and Clarke go head to head once again.

And when bikes screamed off the line for the final time, fans were in for a treat with Mitchell and Clarke close to neck and neck as the pair approached the first turn.

But after only one lap, race two was red flagged, with Quinn going down in turn one, forcing the final race of the day to be restarted.

With the race reduced to 14 laps, when bikes took off once again, it was a mad dash to turn one, but this time it was Guenther who picked up the race lead, followed by Epis, Mitchell and Clarke.

After only two laps, Mitchell began to make his move to the front – his first victim being Epis, who he passed in the back section of the circuit to move up in to second position.

In what was somewhat of a shock to spectators, championship points leader Clarke remained back in fourth position at the five lap mark, a whole 2.6 seconds behind race leader Guenther.

By the halfway mark in the final Motul Supersport race of the day Guenther continued to look comfortable out in front with the race lead, followed by Epis who had fought back to reclaim second, and Mitchell in third. Clarke remained in fourth position ahead of Ted Collins in fifth.

As race two reached its closing stages, Clarke found some late form, managing to get by race one winner Mitchell and move into third position. But Clarke was not finished, only a couple of laps later the Kawasaki rider also made the pass on Epis for second and began to eye off Guenther’s rear wheel.

Race one winner Mitchell wrapped up the last Motul Supersport race in fourth position followed by Ted Collins in fifth.

With the points from two races combined it was JNL Racing’s Luke Mitchell whose 1,4 results saw him awarded with the Round 5 victory, while Guenther’s consistency saw him take second position on the Motul Supersport podium. Third place today was collected by Banhams WA Racing’s Clarke who continues to lead the championship into the final round by eight points.

Luke Mitchell – JNL Racing Yamaha – Motul Supersport Round 5 Winnner said, “I am feeling pretty good to be able to take home the round win here today.”

“It is a good boost for me. First pole, first win and first overall in the ASBK series, so it’s been a weekend of firsts that’s for sure.

“The second race wasn’t what we were hoping for, but we got through it. I hate making excuses but that was the worst pain I have ever ridden in, especially those last five laps.

“It’s good to take the overall win here. Moving on to Winton we are third in the championship now, so I am really happy with that and will just keep working forward from here,” he concluded.

Motul Supersport Championship Standings, after Round 5:

The sixth and final round of the 2016 Yamaha Motor Finance Australian Superbike Championship presented by Motul Pirelli (ASBK)will be held at Winton in Victoria on September 30, to October 2, 2016.

For more information on the ASBK, head to www.asbk.com.au, or for a full list of results from today, head to www.computime.com.au