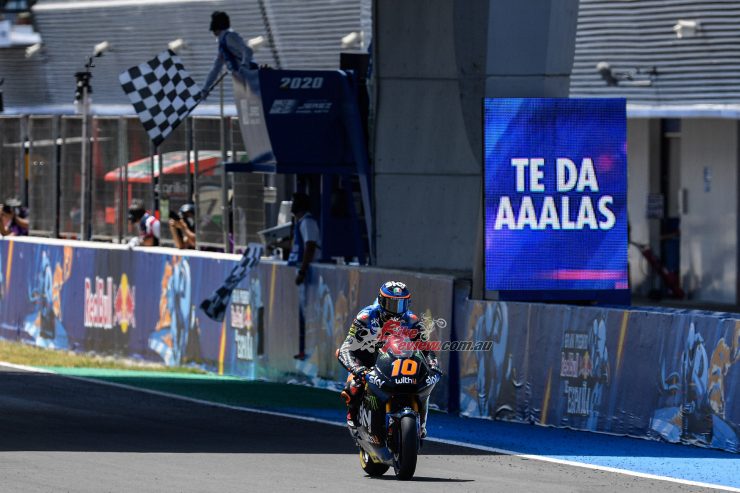 Sky Racing Team VR46’s Luca Marini clinched an impressive victory at the Gran Premio Red Bull de España after holding off a charging Tetsuta Nagashima (Red Bull KTM Ajo) in the final half of the race, the Italian taking the chequered flag for a fourth career Moto2™ win and his third in seven races. Nagashima was on the podium once more after his Qatar GP win, joined this time by teammate Jorge Martin (Red Bull KTM Ajo).

Poleman Martin took the holeshot, with impressive rookie Aron Canet (Inde Aspar Team Moto2) moving into second from Row 2 of the grid. However, it was a nightmare start for HDR Heidrun Speed Up’s Jorge Navarro as the Spaniard crashed out on the exit of Turn 1 after a firm touch from Marco Bezzecchi (Sky Racing Team VR46), and further down the field, there were some elbows from Sam Lowes (EG 0,0 Marc VDS) and Marcel Schrotter (Liqui Moly Intact GP) down the start-finish straight, in fourth and fifth by the end of Lap 1. 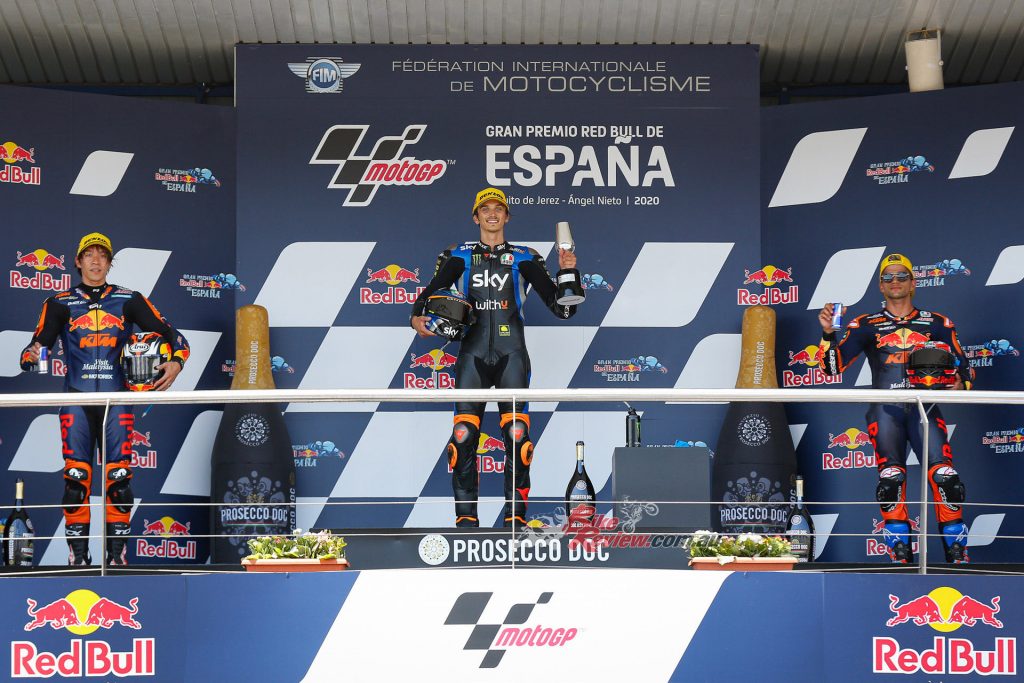 At the end of Lap 2, Marini started to make his way to the front, first moving past Canet for second place. But World Championship leader Nagashima was keen to not let the Italian get the jump on him and he quickly followed him through, with Marini then hitting the front with 20 laps to go thanks to an extremely smooth move through Turn 8. Once again though, it didn’t take long for Nagashima to stay on the leader’s tail by diving past Martin at the final corner on the very same lap.

Now in the lead, Marini seemed to decide it was time to pull the pin and see if anyone could match his pace, immediately pulling out a half a second advantage in just one lap as the lead group began to stretch. Teammate Bezzecchi went down out of third place just moments after squeezing in front of Martin at Turn 8, too, before Schrötter crashed out one lap later, this time out fifth place at Turn 11. It was beginning to turn into a race of attrition in the baking hot, tricky conditions at the Circuito de Jerez-Angel Nieto. 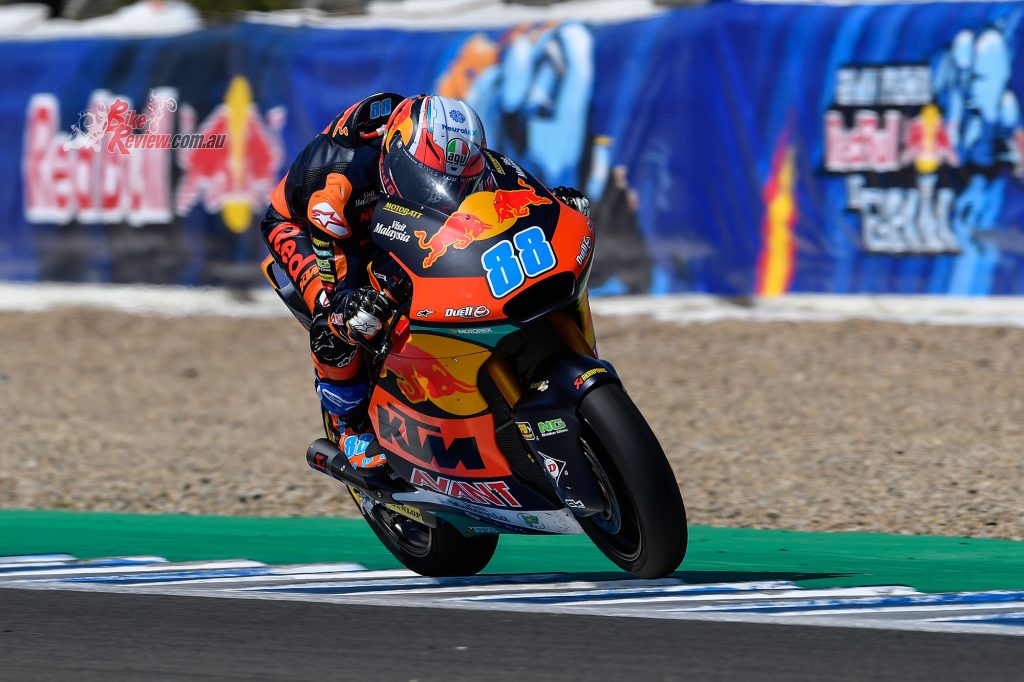 With 13 laps remaining, were we starting to see a repeat of Qatar as Nagashima set a new fastest lap of the race? Not this time, as the laps ticked by with Nagashima only managing to close in by half a tenth and Marini holding firm. The battle for the podium was getting closer than ever though, with Martin coming under all sorts of pressure from Lowes, with the Brit cutting the gap down to less than a second in the fight for the final podium place.

Suddenly though, Nagashima reeled Marini in by 0.439 seconds with only five laps to go and Sky Racing Team VR46 held their breath. It wasn’t to be though, and Marini kept cool under the pressure to take his first win of the year; Nagashima forced to settle for second.

Martin took the final place on the podium, with Lowes in fourth and Canet ending up in fifth in only his second intermediate class race. He was five seconds clear of teammate Hafizh Syahrin, with the Malaysian enjoying his best performance since returning to the class from MotoGP™ as he took sixth. 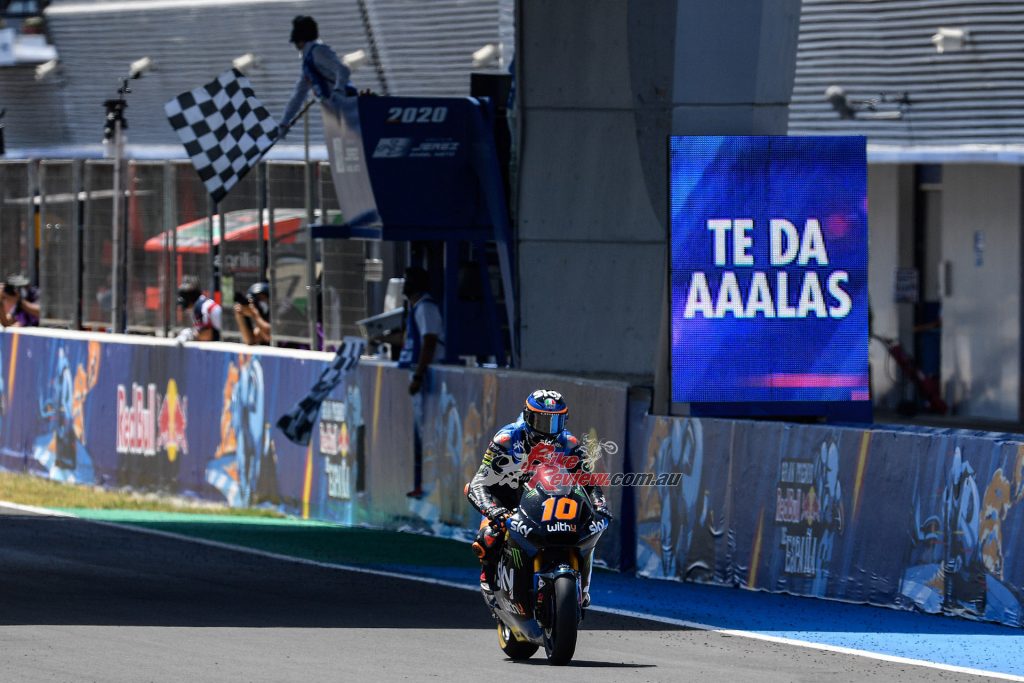 Luca Marini: “It was a very good race, I think in Qatar it could have been the same if we didn’t have the problem with the front, like Jorge and Tetsu were also so strong in Qatar. I think we had to really work a lot on race pace and we started well from Friday. I need to improve a bit in qualifying, but the second row was quite good for the race. It was very hot, although not like for MotoGP!”