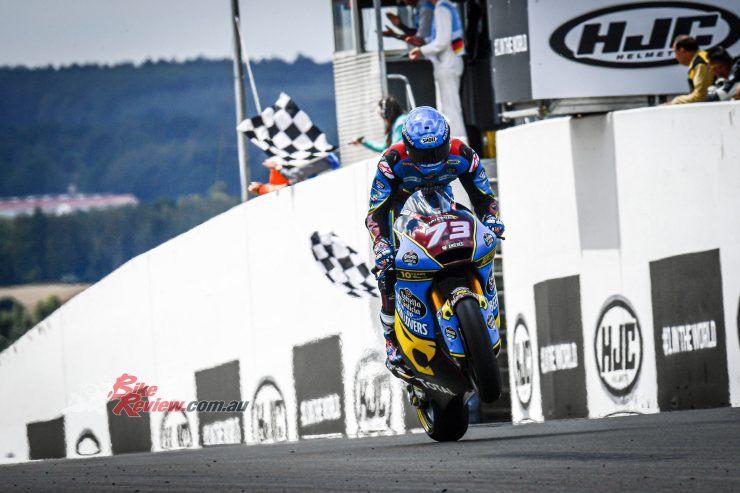 Alex Marquez (EG 0,0 Marc VDS) took another authoritative win in the HJC Helmets Motorrad Grand Prix Deutschland, able to make his way through to the front and pull the pin to stamp some authority back on the standings after getting crashed out of the lead at Assen. The number 73 now leads Tom Lüthi by eight points into the summer break, and his pace will give many a rival something to think about before Brno. Brad Binder (Red Bull KTM Ajo) took an impressive P2 from 17th on the grid, with home hero Marcel Schrötter (Dynavolt Intact GP) completing the podium in front of a partisan crowd. 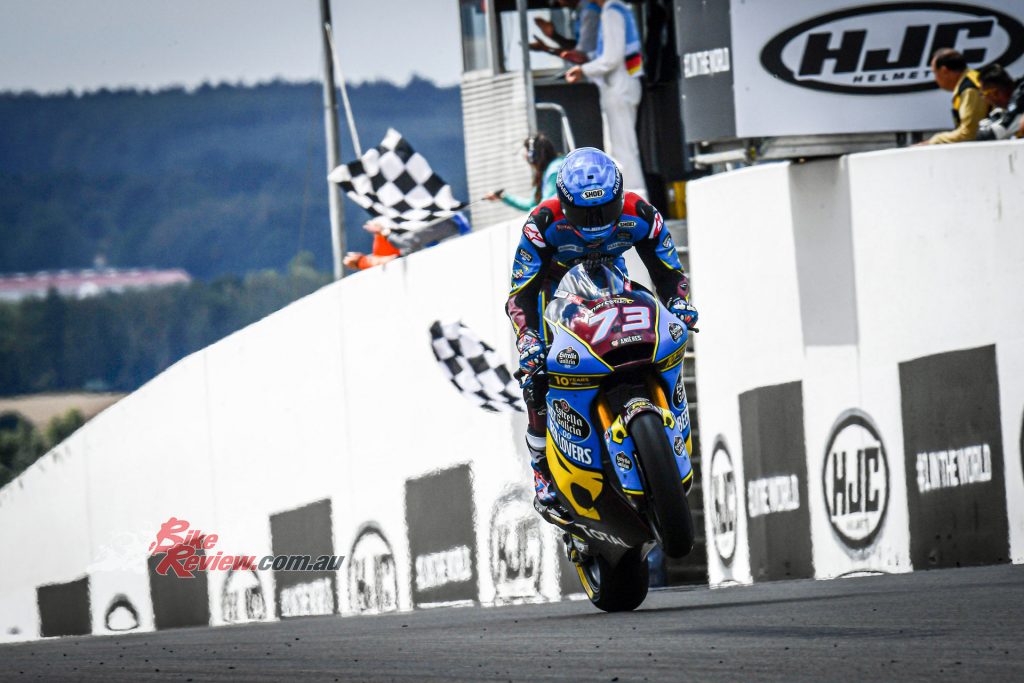 Luca Marini (Sky Racing Team VR46) took the holeshot from second on the grid, with polesitter Marquez getting a sluggish launch off the line before then getting pushed wide by American Racing KTM’s Iker Lecuona at the first corner, ending up down in fifth. At the front Marini’s run didn’t last long as Marcel Schrötter barged through into the final corner, but then the German made a mistake through Ralf Waldmann Curve and that allowed a charging Lecuona to hit the front.

Marquez, though, was back on it. Battling his way back through to second place before then asserting his revenge on Lecuona by squeezing past into the first corner, the Spaniard hit the front but later Lecuona was able to squeeze his way back into the lead after a mistake from Marquez at Turn 3. The number 73 struck back quickly, however, and the race was on to stop him.

Behind the leading duo, Brad Binder was on a real charge. The South African had sliced through from P17 to join the fight for the podium, getting to the head of the battle as the leading duo’s scrap then allowed him to move further into contention.  A move on Lecuona into Turn 1 then put him into second, but moments later he ran wide at Turn 3 and Lecuona pounced to retake the place.

The battle between those two raged as Marquez managed to edge half a second clear, then a second, and from there he never looked back. Crossing the line with an advantage of 1.2 seconds, it’s his fourth win of the season and takes him eight points clear at the top of the Championship. 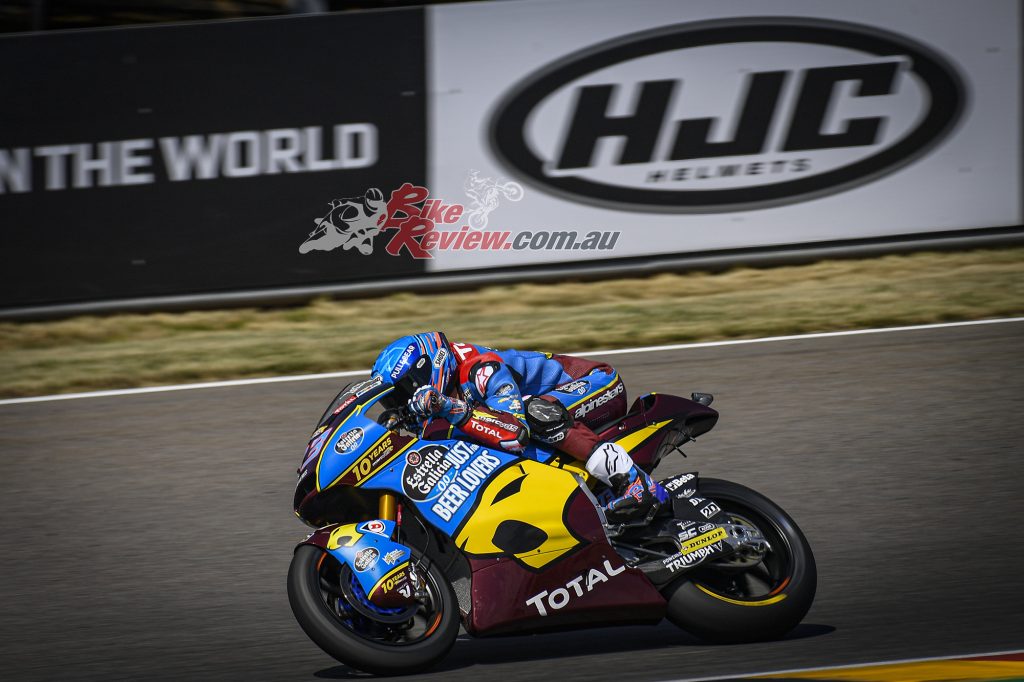 Behind him, Schrötter had seen Marquez escape and was back on the duo chasing him, soon through to second place as Binder seemingly started to struggle following his monster effort to fight through from the sixth row of the grid. But the South African managed to keep it together to take second as Schrötter and Lecuona fought it out for the podium just behind.

Then, heartbreak struck for the Spaniard. On the final lap Lecuona suddenly slid out and Schrötter was unthreatened in third, taking another podium and this on home turf after a tougher run of recent races.

Fabio Di Giannantonio (MB Conveyors) took a stunning fourth place from fourth on the grid and his best rookie finish, just ahead of former Championship leader Tom Lüthi (Dynavolt Intact GP). The Swiss rider was moving through the field well until a harsh move on Vierge saw the Spaniard crash out and the number 12 was handed a Long Lap Penalty. 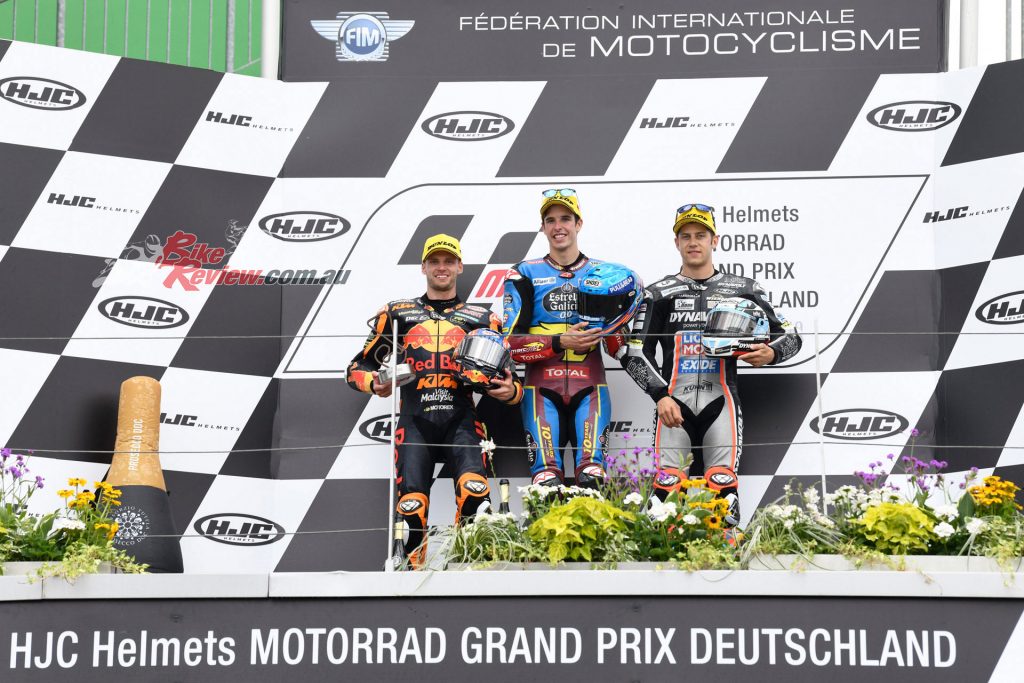 Alex Marquez: “I still can’t believe it to be honest, it was a really good race. I didn’t expect to make a gap, I expected to be with the front guys but yesterday we didn’t have the best rhythm. Today Warm Up was wet so we couldn’t try anything either, so I said ok we’ll go into the race and just try to be focused and be there. I knew yesterday during Q2 we had good pace after the fast lap, and today I was trying to manage that, the rear tyre and the front, because here it was a bit on the limit, especially in the last ten laps. But before then I already had a gap I was trying to manage it. It’s really good, I’m really happy and it really gave me the confidence I needed at this track because in the past I used to hate it! But now I’ve started to love it a little bit. So that’s good and I go into the break with a good feeling.”