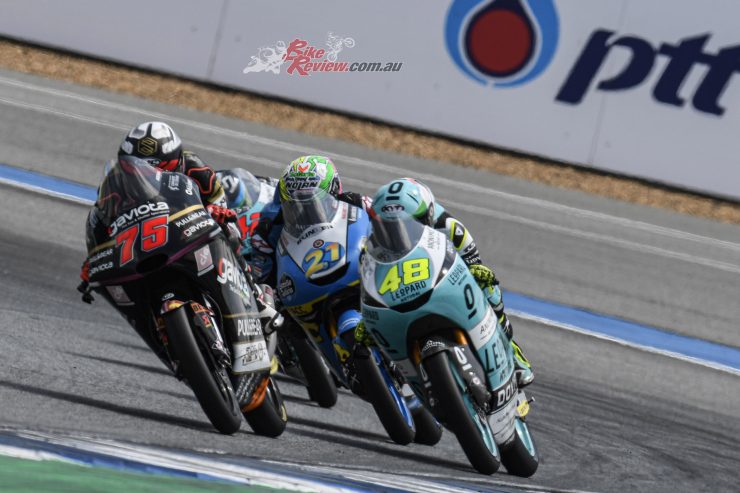 Albert Arenas (Gaviota Angel Nieto Team) took his first victory of the season in the PTT Thailand Grand Prix, becoming a record-breaking 11th different winner in 2019 after coming out on top in a battle of attrition at Buriram. The Spaniard fought at the front throughout and held off Championship leader Lorenzo Dalla Porta (Leopard Racing) at the final corner, although the Italian’s second place seriously increased his lead in the standings after key rival Aron Canet (Sterilgarda Max Racing Team) suffered a DNF. Alonso Lopez (Estrella Galicia 0,0) completed the podium, taking his first ever rostrum finish. 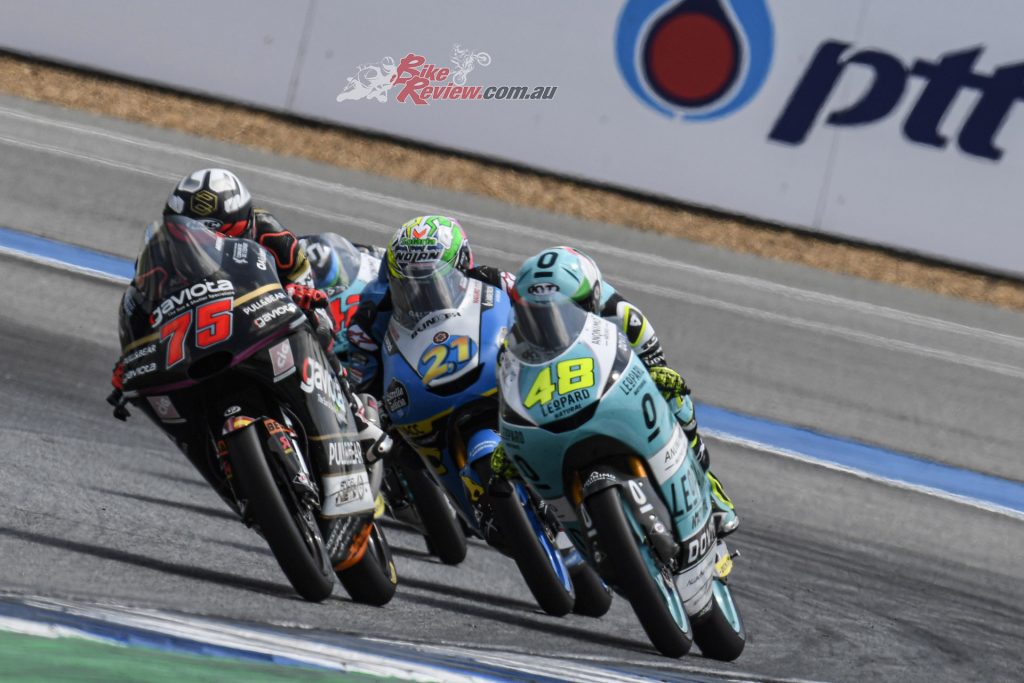 Marcos Ramirez (Leopard Racing) took the holeshot from second on the grid, the Spaniard getting the jump on polesitter Celestino Vietti (Sky Racing Team VR46) as the Italian lost a few positions off the line. Arenas initially took over in second, although Lopez was threatening behind and Tony Arbolino (VNE Snipers) another to soon make his presence felt. But it remained, of course, a huge freight train at the front.

Lorenzo Dalla Porta and Tatsuki Suzuki (SIC58 Squadra Corse) were making waves at the front of the pack before long too, and the contest was a classic Moto3(tm) squabble of changing positions, swapping paint and slipstreaming. And it seemed that was the challenge for Dalla Porta and closest title rival Canet: navigating calmly through the storm despite so much on the line for both.

Calm, however, it would not prove to be – for Canet, at least. Mid-race, the Spaniard suffered contact in a multi-rider crash instigated by Darryn Binder (CIP – Green Power), down at the final corner along with John McPhee (Petronas Sprinta Racing) and Tatsuki Suzuki (SIC58 Squadra Corse). The South African was given a ride through penalty for the move, but the Championship damage was done for Canet as Dalla Porta was left with an open goal. Would he capitalise?

Heading into the final laps, a smaller group of seven was fighting it out for the podium, with Arbolino out of it and well down the order after suffering a problem and adjusting his glove, Andrea Migno (Mugen Race) skittling Ai Ogura (Honda Team Asia) and Ayumu Sasaki (Petronas Sprinta Racing) sliding out. Bit by bit, however, it became five, as Dalla Porta, Arenas, Lopez, Ramirez and Vietti all vied for victory.

At Buriram, the final corner always creates last minute drama and this last lap was no different. Arenas was ahead into the braking area but Dalla Porta, despite everything on the line, decided to lunge for it – and the Italian made it through. Arenas was ready though, and the Spaniard cut back across to gun it to the line and took the flag a couple of tenths clear; his first win of the year. 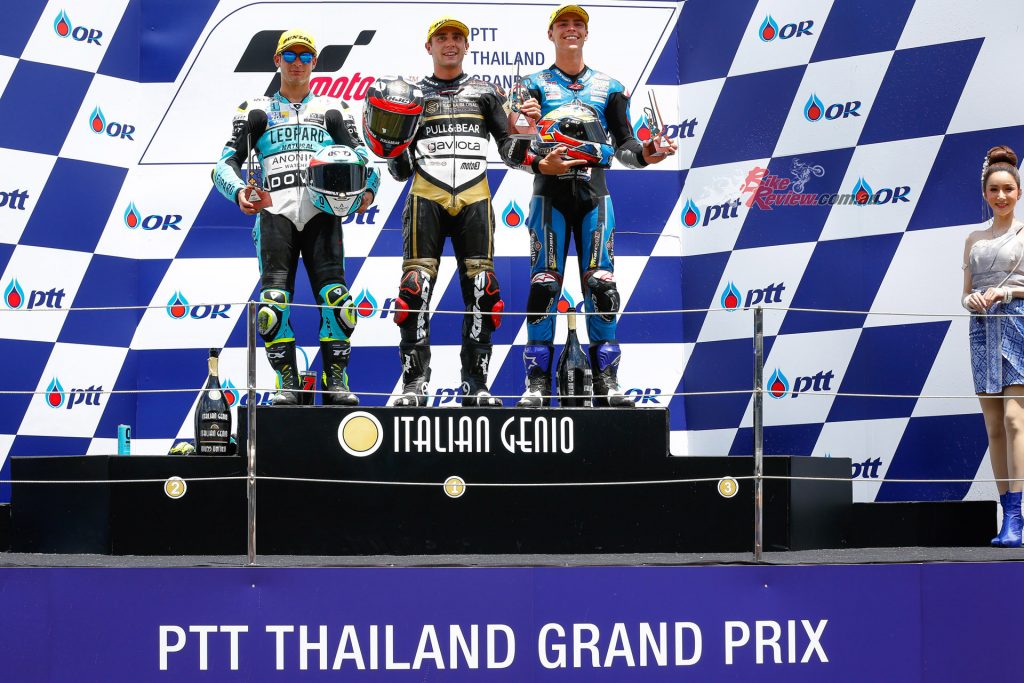 Dalla Porta was able to just hold off an awesome performance from Alonso Lopez, with the Championship leader taking a valuable 20 points for second. Lopez’ third, meanwhile, saw him visit the rostrum for the first time in his Grand Prix career, another boost to his impressive form of late.

Ramirez completed the podium after a solid race running at or near the front, just losing out over the last couple of laps – and getting a brief punt at the final corner with a few laps to go, too. Dennis Foggia (Sky Racing Team VR46), who took his first podium in Thailand last year, ultimately just got the better of rookie polesitter teammate Vietti as the two took fifth and sixth respectively, just ahead of Kaito Toba (Honda Team Asia), who was the last man in the front group.

Next up was a best yet for Stefano Nepa (Reale Avintia Arizona 77) by some stretch, the Italian taking an impressive P8 and crossing the line somewhat lonely. Rookie Raul Fernandez (Gaviota Angel Nieto Team) was the next man up the road, a few seconds back, as he took ninth.

Arbolino, after his issue during the race, gritted his teeth to be able to come back from as low as 18th and complete the top ten, with Filip Salač (Redox PrüstelGP) and teammate Jakub Kornfeil taking 11th and 12th, the three all within half a second of Fernandez. Riccardo Rossi (Kömmerling Gresini Moto3), Sergio Garcia (Estrella Galicia 0,0) and Makar Yurchenko (BOE Skull Rider Mugen Race) completed the points.

Albert Arenas : “”It was a really good race for me, I was fighting all the time, I knew I had to stay in top positions all the time because in the first and second sectors I suffered a bit more and then I could rest a bit in third and fourth sectors. That’s what I did every lap. The bike was really good through the corners, I felt really confident with the bike…and I won!”