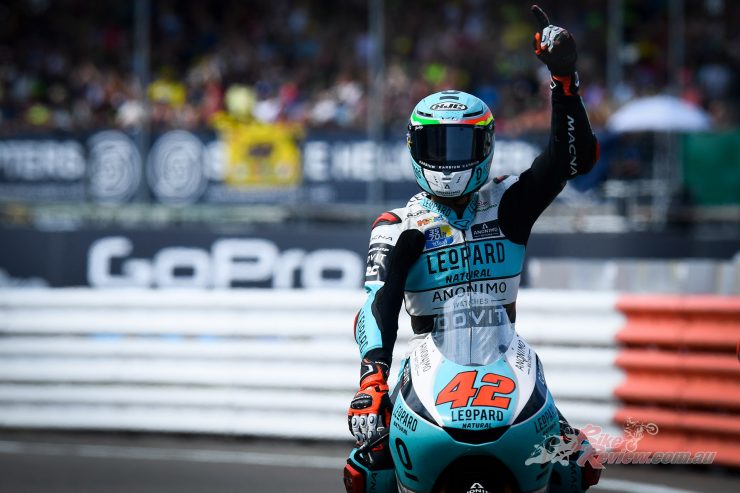 Marcos Ramirez (Leopard Racing) timed his attack to perfection to take victory in the GoPro British Grand Prix, snatching the lead on the final lap and putting in a faultless ride to the line thereafter. The battle to decide the podium went down to polesitter Tony Arbolino (VNE Snipers) vs Championship leader Lorenzo Dalla Porta (Leopard Racing), with Arbolino just coming out on top. 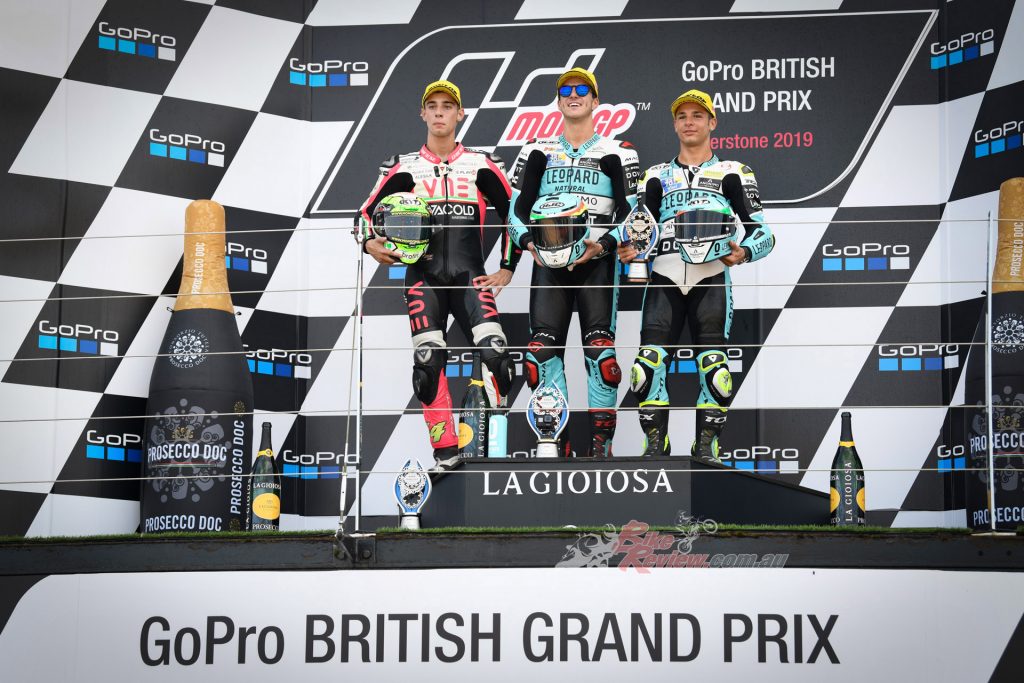 Dalla Porta’s podium, however, puts him well ahead in the standings after a tough day for Aron Canet (Sterilgarda Max Racing Team).

Arbolino got the holeshot from pole with a stunning start to streak away at the front of the field, with Dalla Porta intially losing second but wasting no time in taking it back. John McPhee (Petronas Sprinta Racing) was up into third past his teammate Ayumu Sasaki, but it remained a tight freight train at the front in classic lightweight class style.

Dalla Porta was into the lead before the end of Lap 1 though, and in the perfect position as key rival Aron Canet languished somewhat in P13 in the early stages. And as the Dalla Porta-Arbolino-McPhee fight rolled on at the front, disaster than struck for Canet as he was taken down by Albert Arenas (Sama Qatar Angel Nieto Team), able to rejoin but dead last with 15 laps to go. 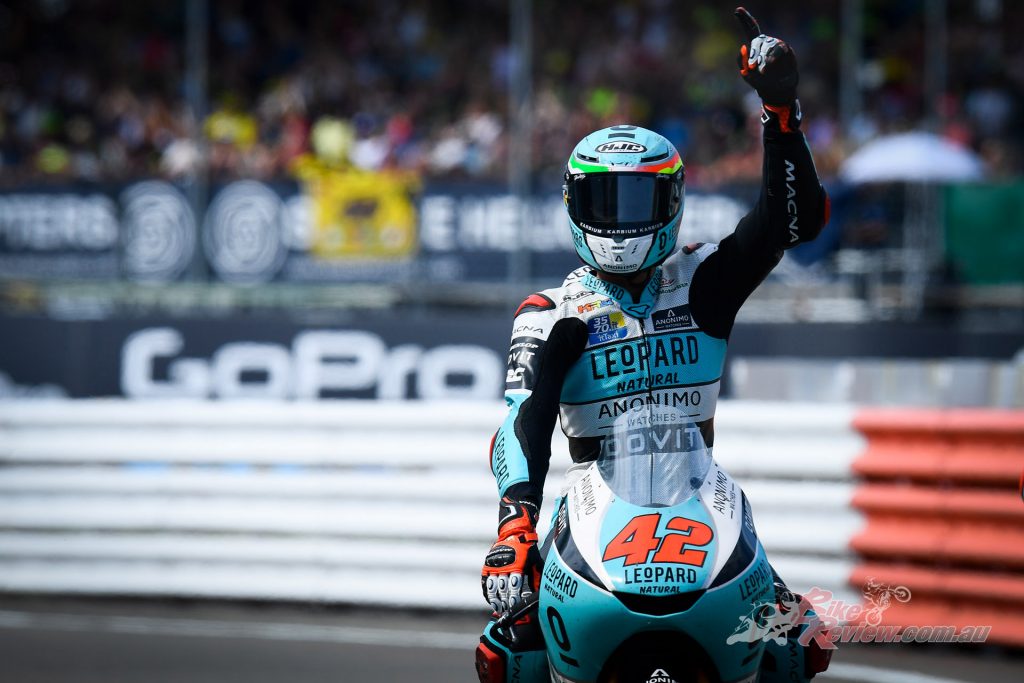 As Canet set about trying to tag back onto the field, those chasing the front trio made sure it became a huge group squabble once again. Ai Ogura (Honda Team Asia) was making moves into the top three, Niccolo Antonelli (SIC58 Squadra Corse) lurked in fifth and Ramirez was well in the mix by then. 12 riders remained line astern at Silverstone, with the ante upped and upped as the laps ticked down.

Dalla Porta, Arbolino and Ramirez were the men consistently leading the pack, and as we headed onto the last lap they remained there, with Antonelli for close company in fourth. Down the Hangar Straight Ramirez struck to take over from Arbolino in second, with a collective breath held down at Leopard as their two machines were then poised to fight it out for the win. But Dalla Porta then headed slightly wide and Ramirez pounced past…ultimately, the move that would give him his second Grand Prix win.

Nailing the rest of the lap, the Spaniard couldn’t be caught from there on out, with Dalla vs Arbolino then the key battle for the podium. It was the polesitter who ultimately came out on top, with Dalla Porta forced to settle for third but nevertheless extending his Championship lead by what could prove a pivotal margin.

Antonelli took fourth ahead of teammate Tatsuki Suzuki, with Ayumu Sasaki crossing the line sixth to pip teammate and home hero John McPhee. Dennis Foggia (Sky Racing Team VR46) took P8 and was just 0.025 ahead of rookie teammate Celestino Vietti after the latter put in some work to tag back onto and then move through the group, with Ai Ogura also within half a tenth as he took another solid finish.

Jaume Masia (Bester Capital Dubai) took eleventh after a run off late on that cost him his earlier place fighting in the freight train, with Darryn Binder (CIP – Green Power) taking a lonelier P12.

The huge group fighting for the final points-paying positions staged some of the most stunning action of the race, with Canet having fought from the very back to tag onto the train and then make his way through it. By the end of the race the Spaniard made it to P13 to take two valuable points, just ahead of replacement rider Jeremy Alcoba (Kömmerling Gresini Moto3) and Alonso Lopez (Estrella Galicia 0,0). The battle, though, stretched right back to Makar Yurchenko (BOE Skull Rider Mugen Race) in P23.

Marcos Ramirez: “Today was incredible. I started from ninth, and I knew that I had the potential to fight at the front so when I started the race…there was some contact, a lot of riders fighting and it was hard the first part, but in the second half I changed it up, I started to overtake round the outside to get to the front and in the last four laps all three of us were fighting for the podium and I was thinking I could finish on the podium. Then on the last lap I took second and saw Lorenzo go wide and I thought that was my opportunity, I pushed at 100% to the final corner…and that was it. I finished first, thanks to my team and family who’ve always supported me.”