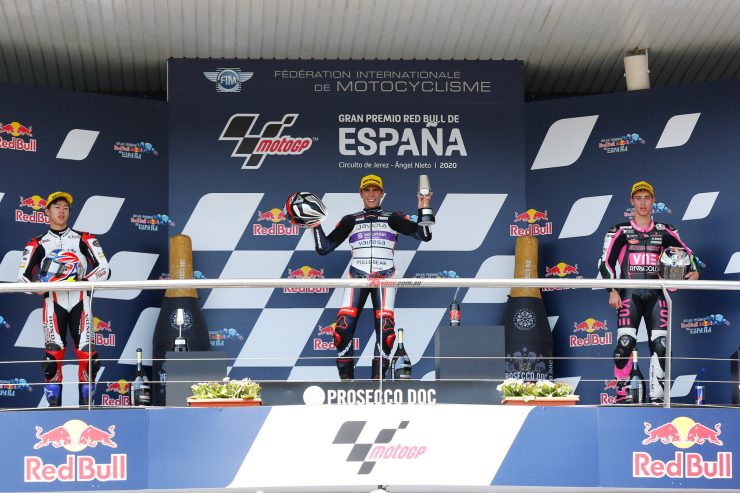 On the last lap, title challenger John McPhee (Petronas Sprinta Racing) crashed on the exit of Jorge Lorenzo corner on the final lap, with Ai Ogura (Honda Team Asia) and Tony Arbolino (Rivacold Snipers Team) slicing through to stand on the Jerez rostrum. 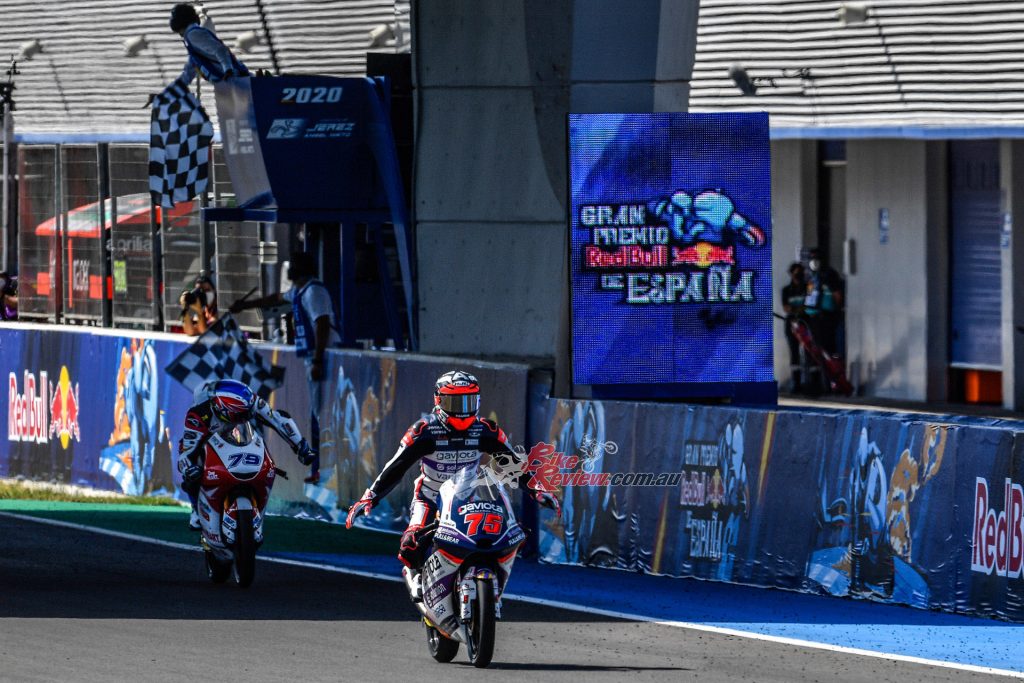 Off the line, polesitter Tatsuki Suzuki (SIC58 Squadra Corse) got the perfect launch, as did second-place Andrea Migno (Sky Racing Team VR46), but it wasn’t the same story for McPhee as the Petronas Sprinta Racing rider got swamped and ended up in P8 on the opening lap from the front row of the grid. Turn 1 saw two fallers as Dennis Foggia (Leopard Racing) and Carlos Tatay (Reale Avintia Moto3) tangled, thankfully unhurt, as Suzuki started to push at the front. A three-tenth gap would soon get swallowed up by the classic Moto3™ freight train though.

The riders were line astern but coming down the back straight, it was almost disaster for Arbolino. The Italian was in the slipstream and went to the inside, caught the grass and the bike spat him out the seat. A scary, scary moment that could have ended more than just Arbolino’s race, but thankfully it was a lucky escape. In the early stages though eyes were on Sergio Garcia (Estrella Galicia 0,0) as the Spaniard proved a man on a mission – going from the back of the grid to P10 on the opening three laps.

Arbolino was the fastest man on circuit though as he slotted himself into P2, undeterred by his moment and splitting the Sky Racing Team VR46 bikes of leader Celestino Vietti and Andrea Migno. With the top 17 riders split by two seconds – Moto3™ was well and truly back. Vietti was the man who held the lightweight class baton for a number of laps, with Arbolino and Arenas looking feisty behind the number 13 sophomore as the positions inside the top 10 continued to change corner by corner. 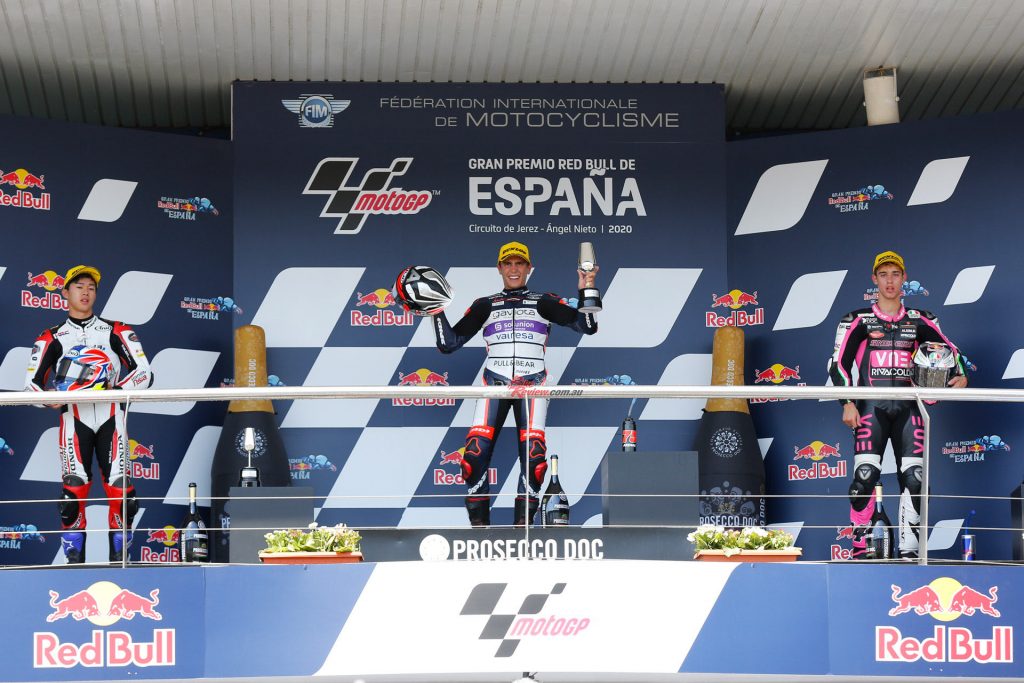 With 12 to go, Arbolino led for the first time but soon, reigning Junior World Champion Jeremy Alcoba (Kömmerling Gresini Moto3) and Championship leader Arenas were at the front, with CIP Green Power’s Darryn Binder now second from 21st on the grid – something we’re very used to seeing from the South African as he made some incredible trademark progress. And after a sluggish start, McPhee was now second behind Arenas – the top two from Qatar – as the riders approached the final 10 laps.

As Garcia was handed a long lap penalty for exceeding track limits though, his dream of the fairytale, 2016-echoing-victory-from-the-back seemed to fade, and the fight went on without him.

With eight laps remaining it really was anyone’s to win, with the top 12 joined at the hip in a classic Moto3™ encounter, but Red Bull KTM Tech3 duo Ayumu Sasaki and Deniz Öncü seemed to be closing in on the leading group – as was Romano Fenati (Sterilgarda Max Racing Team), joining them in reeling in the freight train.

With four to go, McPhee made his move. An aggressive pass on Arenas at Turn 11 was followed by a two for one purchase at Turn 13 on Arbolino and Binder. With two to go, McPhee led but now Arbolino and Arenas were getting impatient. Arbolino struck for the lead as disaster struck for Binder, who slid out so close to the end.

On the final lap, McPhee was back in the lead as the number 17 dived up the inside of Arbolino, but down the back straight the Italian was tucked back into the slipstream and hit back at Pedrosa corner. Arenas then got past McPhee at Turn 9, and finally Jorge Lorenzo corner – the last corner – awaited. And drama followed.

McPhee dived up the inside but ran slightly wide, with Vietti then touching Arbolino on the exit, who in turn made contact with McPhee – who crashed with the finish line in sight. There was no such drama for Arenas, who crossed the line after a perfectly-judged final corner for his second win of the season and to increase his Championship lead. 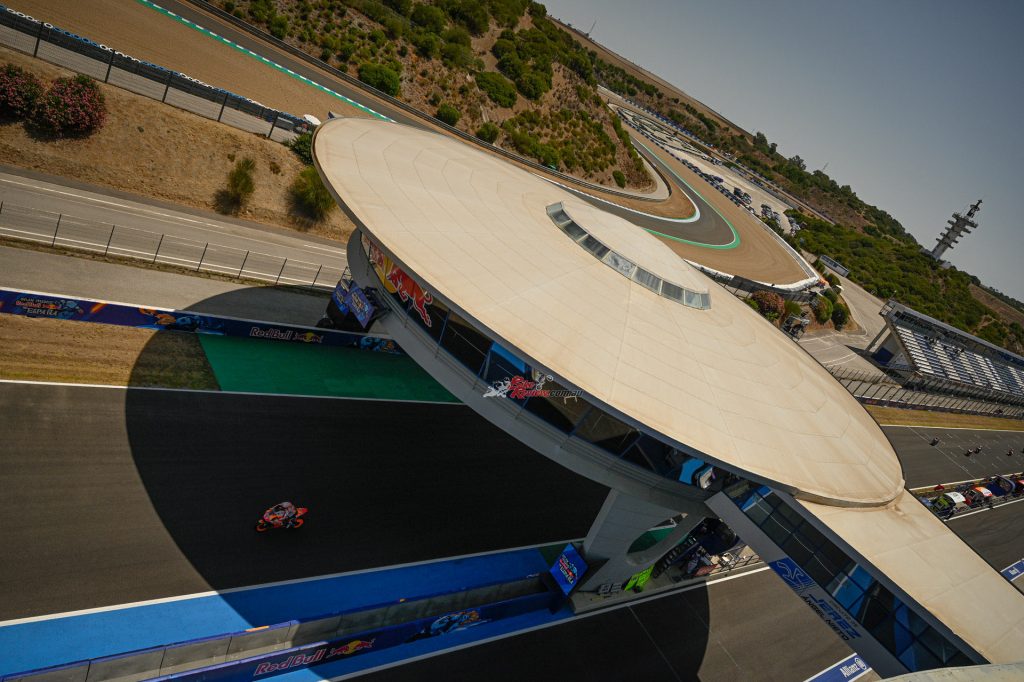 Ogura had a wonderful final handful of laps to finish second for his second podium of the season, with Arbolino forced to settle for P3 after going into the last corner first. Migno claimed P4 as he picked up his first points of 2020, as teammate Vietti finished P5 to also earn his maiden points haul of the season. Raul Fernandez (Red Bull KTM Ajo) was a protagonist in the lead group for the entirety as the Spaniard collected P6 after finishing P10 in Qatar, with Suzuki and SIC58 teammate Niccolo Antonelli finishing 8th and 9th despite coming across the line less than a second behind the winner – that’s how close it was again in Moto3™. Jaume Masia (Leopard Racing) completed the top 10.

Albert Arenas: “Incredible. This race was amazing, really hard, because of the heat and the tyre, the rear soft was so slippery at the end but I knew I had a good feeling when the tyre came down and I could stay fast in the corners despite the spin. But I’m so happy for the team, we made a last minute change before the race, I had a different strategy in Warm Up, I went out the pits and alone, I think I was 24th, bit backwards but I was working for the race. We refined that and… incredible. The last lap I said ok the podium is a good result, but I knew that if I did the right things at the right moment the victory was possible. Tony closed the door really well but I had made an outside overtake in thef final corner so I knew it was possible, then I saw McPhee was too fast and I waited… incredible, man. Thanks everyone, I’m really happy.”