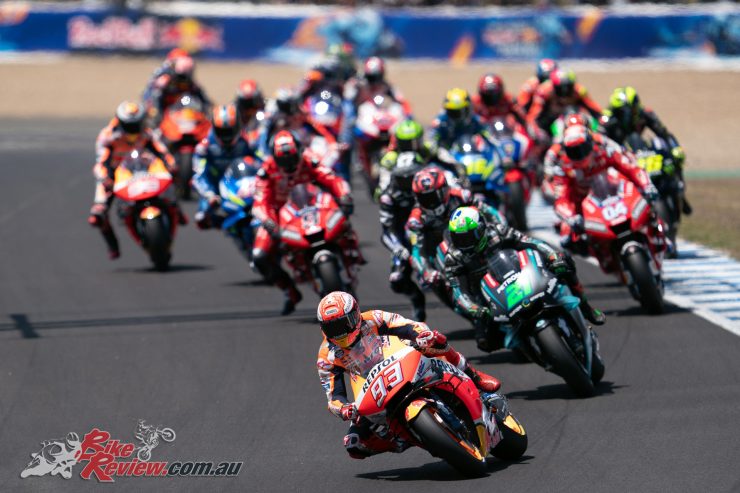 Ahead of track action on Friday, the pre-event Press Conference for the Shark Helmets Grand Prix de France got the event in gear as home heroes Fabio Quartararo and Johann Zarco were joined by reigning Champion Marc Marquez, COTA winner Alex Rins, third in the Championship Andrea Dovizioso and Maverick Viñales, who was back on the podium in Spain for the first time this season. 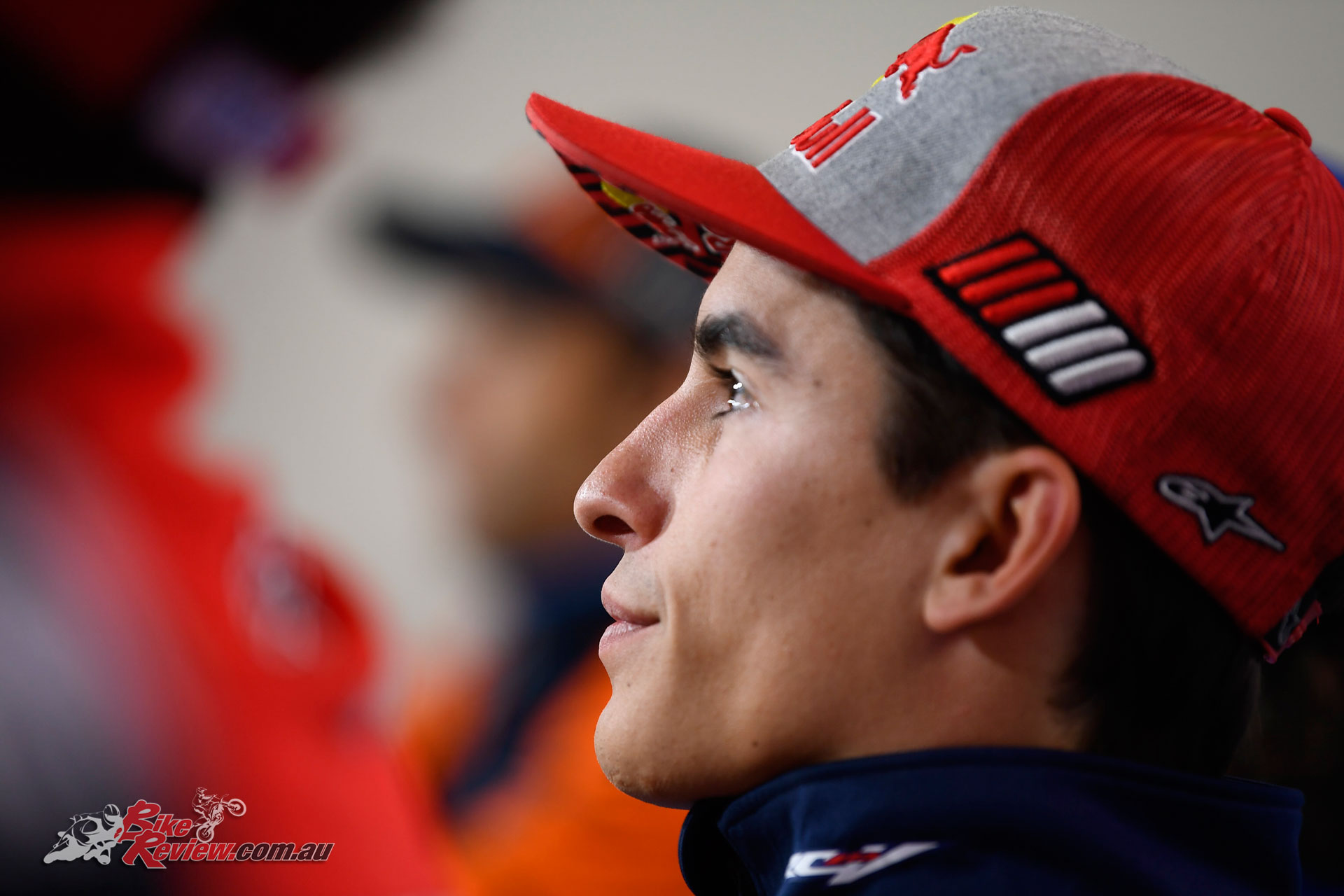 Talk centred on the season so far, home pressure and, of course, the race ahead at the classic Le Mans circuit. Marquez, as the Championship leader, spoke first. “Jerez was important but it was another race, another GP and the main thing is we took the 25 points, this was the key and what we are here looking for. Also in the test on Monday we were competitive, fast and consistent; what we were looking for. Now we arrive in Le Mans, which is a completely different track, more stop and go, last year was a good weekend so we start with a good mentality and optimistic, then we will see during the weekend where we are…opponents, tyres, weather…try to find the way to be fighting for the podium on Sunday. 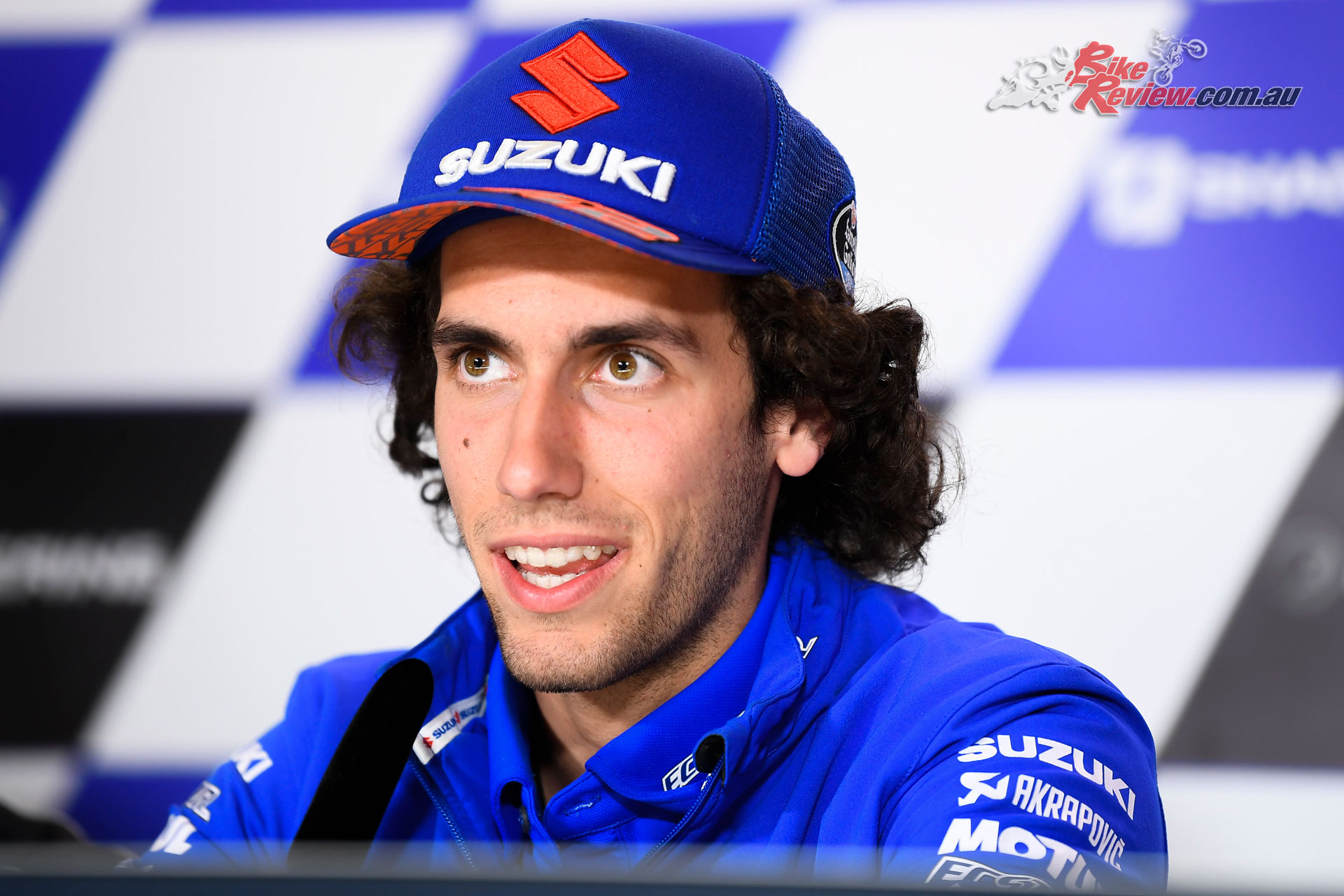 Next up was Rins, who took his first win at COTA and kept it rolling with a podium at Jerez. After a positive test the day after as well – and only a point off Marquez in the standings – it could be a crucial weekend, “It’s been a good initial part of the season with good results – a victory in Austin and second place in Jerez. So, after the race in Jerez we try a lot of things. We try a different swingarm, the new ‘spoon’; it was very positive the test. We found good things, not for this race, but for the middle of the season so it was quite nice.

So does testing get better with age? Apparently it does! Especially when you’re only a point off the Championship leader, “Maybe in my first year in MotoGP I go to the test and it was boring. but when you are there, when you are fighting for the top positions, when you are motivated it’s not a problem to ride the next day!” 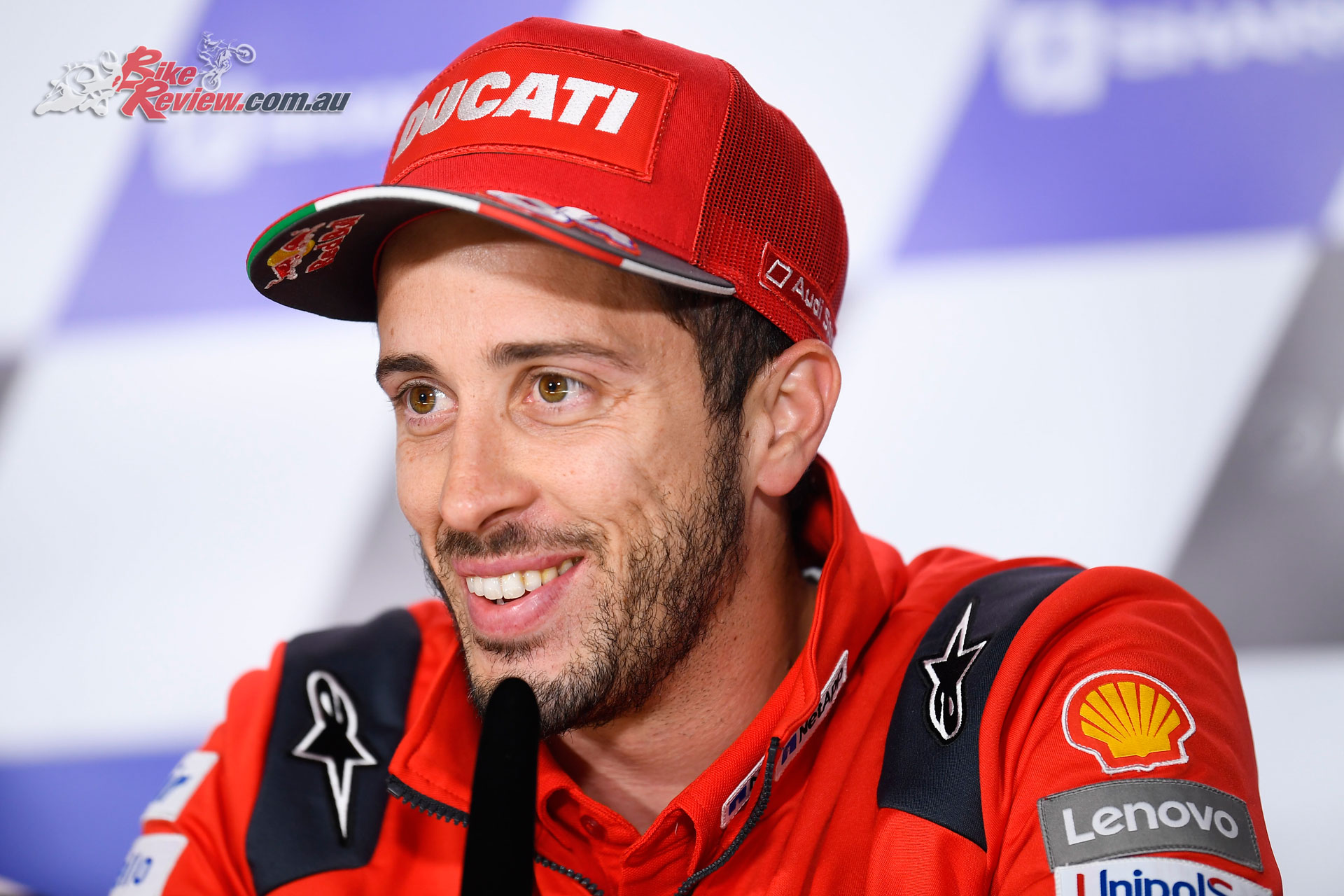 Dovizioso was the next man to speak, and he started off talking about the Championship – he led into Jerez but then just missed the podium – but he says being so close to the top is key, and that he expects bigger things from France. “This situation in the Championship is good and completely open. Like I already explained, there are more of us fighting for the championship. Yes were are at the beginning and anything can happen but I expect more people fighting for it.

“I’m happy to be here, Le Mans is a good track for me, a good weekend, last year our speed was good so I expect to be fast. Faster than Jerez, but you know this season the competitors are a bit different. The speed is different, especially in the practice, I think more riders will be at the top so it’s important to be there. And especially with the weather, Le Mans is always like this and it looks like the weather will be unstable sp anything can happen so we need to be ready. Overall I’m happy to be here and I think we can fight for the podium and victory.” 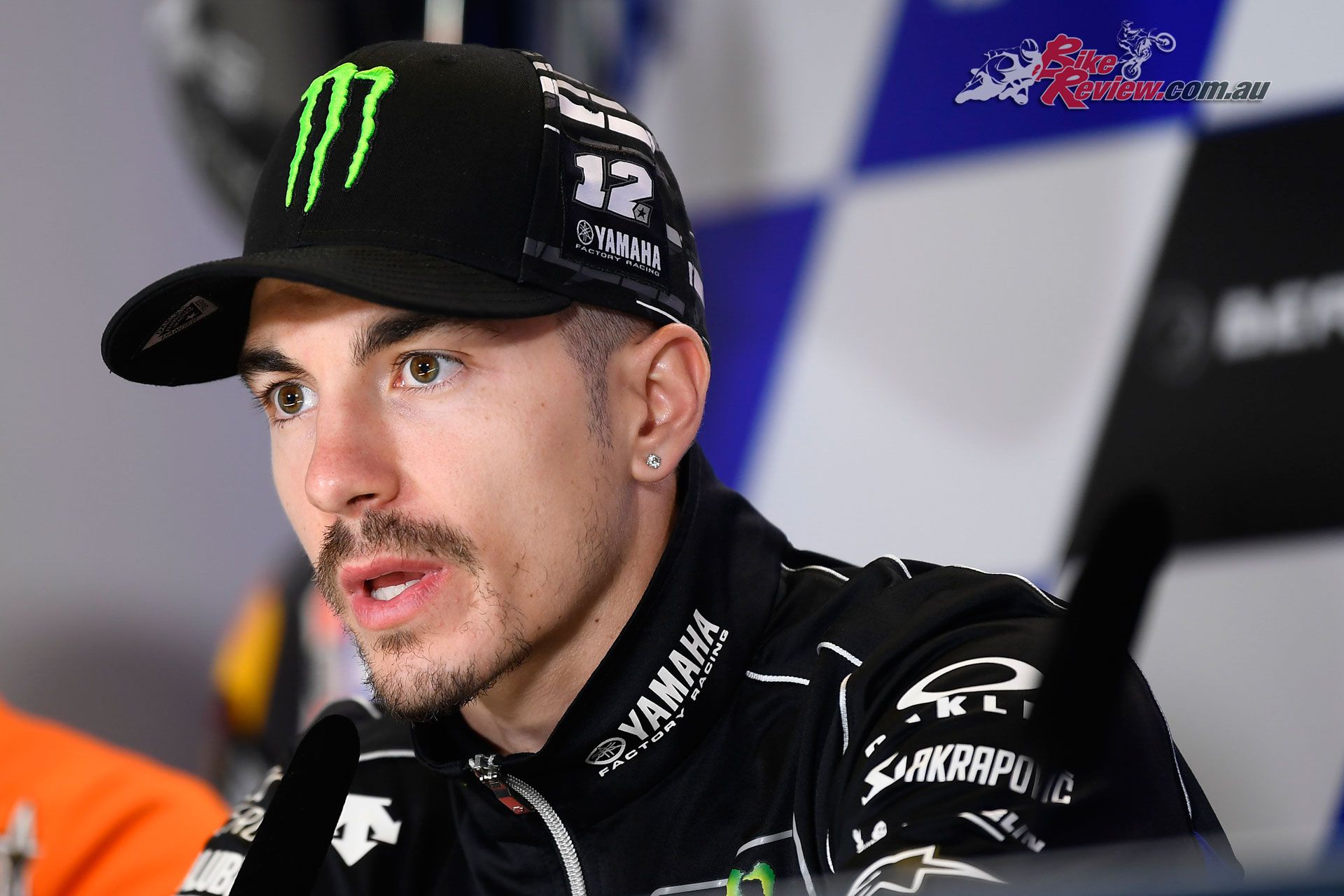 2017 Le Mans winner Viñales is another positive rider expecting better and better results. He just beat ‘DesmoDovi’ to P3 in Spain for his first premier class podium on home turf and now he’s ironed out some early race problems it’s game on. “Honestly for us it was really important to go into Jerez and make the most of our potential. Especially the first laps, going well that was the most important for us because we lose many seconds in Qatar, Austin and Argentina so we couldn’t show our potential. So, I think, for sure, the result in Jerez was very important. We brought a lot of confidence into the team and that’s what we needed.

“We need to keep working, we need to try understand the way to go. We improve quite a lot on the test, so I’m really pleased. Let’s see here in Le Mans – a track I really like. We can give our best and be, at least, on the podium. In think the main objective is to be on the podium and fighting for the top places. We need try to be on the front row as I think in Jerez that was really important because the other two Yamahas were really fast on Saturday.” 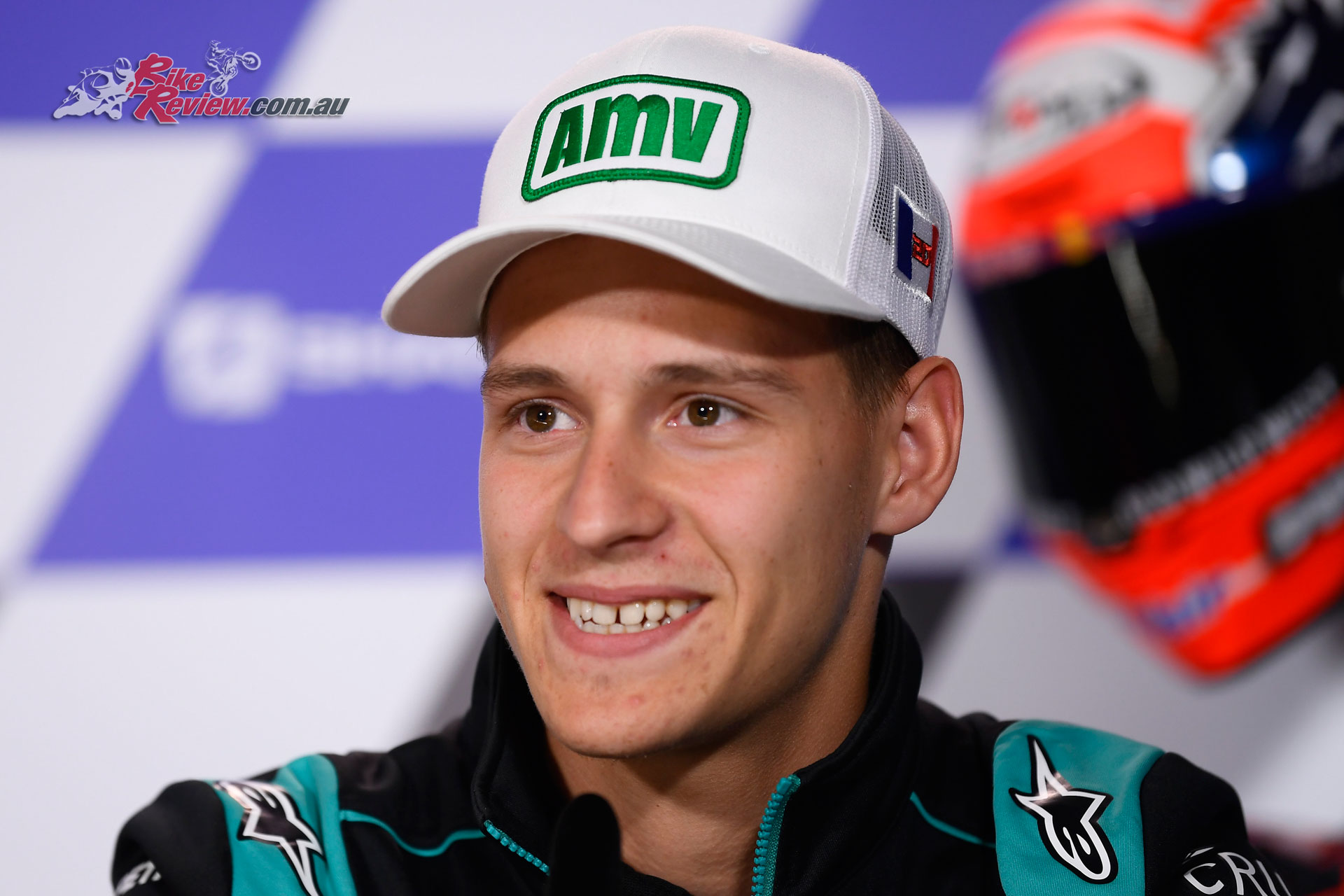 Then it was time to hear from the man of the moment in many ways: Quartararo. Now the youngest ever polesitter in MotoGP, he saw his first podium slip through his grasp in Jerez after a mechanical problem but the Jerez test saw him shave another stunning half second off the new lap record he’d set on Saturday. After that rollercoaster, how’s he feeling ahead of the French GP? He kept it short but sweet.

“For sure as you know, Jerez has been really good for us. We didn’t expect, first of all, to get pole, and the race was really good, it’s really difficult to overtake on the MotoGP bike in Jerez so it was good to get pole. In the race the first lap I really struggled to follow Franco and Marc but in the end I found two tenths from free practice and I was really good on the bike. Yeah what happened, happened but its really positive to have seen lots of things from Marc during the race…

“After what happened in Jerez, the fans are a little bit crazier. For sure we need to be focused on energy and of course, enjoy the home GP!” 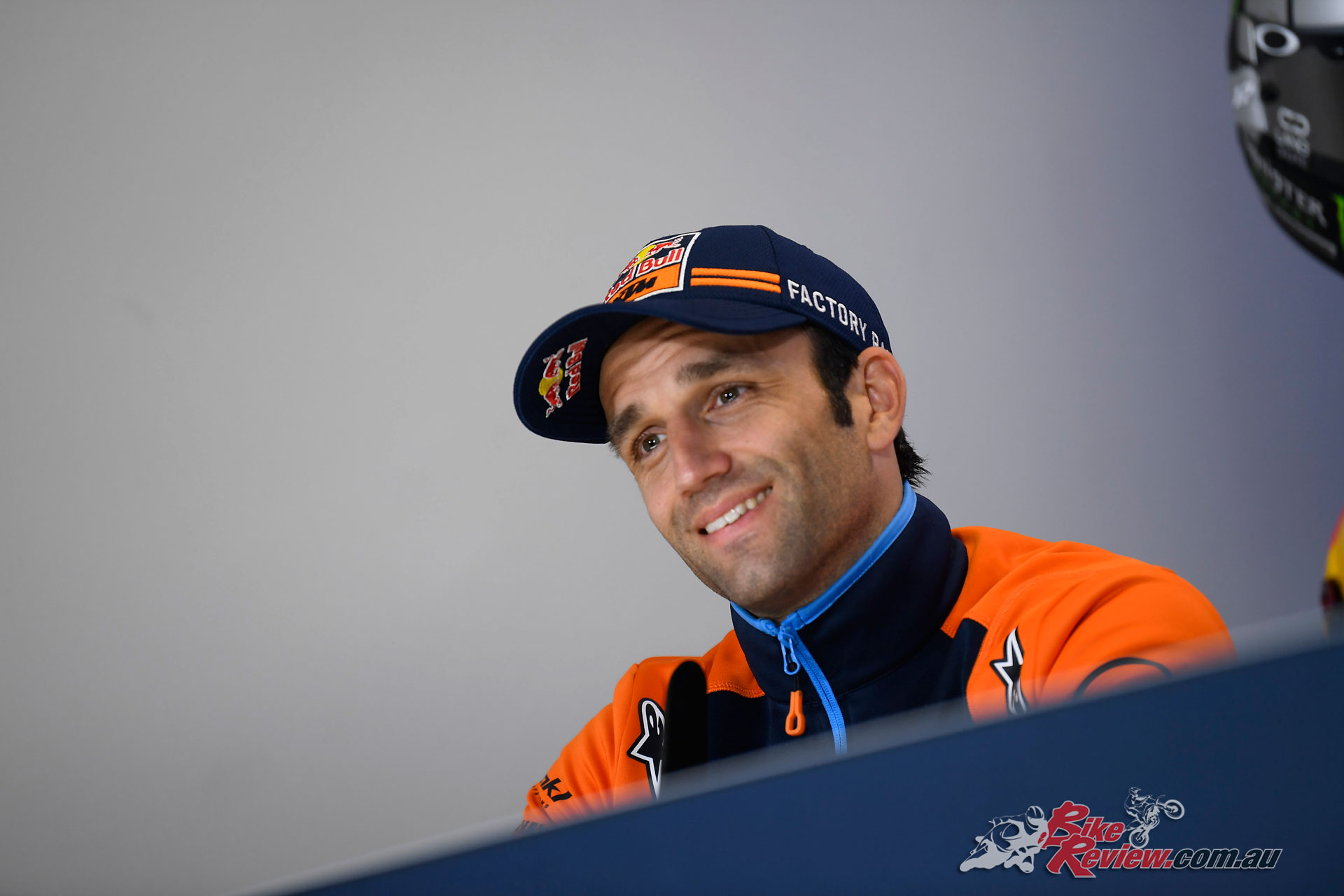 Finally, Zarco took to the mic. First up the Frenchman debriefed the pre-event – where he impressed the dancers of the Moulin Rouge with a back flip – before looking ahead to the race after a tougher start to the season.

“It was a great evening at the Moulin Rouge. An amazing show, really nice girls for sure. Nice outfits, nice decoration, everything was nice,” he laughs. Then, it was back to racing talk. “The energy from the fans, even if I’ve had a hard beginning to the season, I feel a very positive energy from them here. They really support me and say, ‘you can do it and we trust in you’ and that gives me energy. After Jerez we had two days of tests. Testing is interesting because you can keep working on the rider and you have time to try a lot of things on the bike. The job of test rider is kind of difficult, you can try 20 things, but it could only be only one working. And if you have only one thing working you must be happy. That’s what we did and now I’m ready to go. As all the riders say we must see the weather conditions. I think, I cannot say an advantage, but we’ll have less disadvantage because I tested here before. I had two days here before Jerez so it will help me to be quicker and maybe closer to the top guys. From that, I hope to build a good weekend and have a good weekend for me and all the team.”

Will the home heroes steal the show? Can the reigning Champion keep his grip on the top? Or will someone else take the throne this weekend in France…find out when the lights go out for the MotoGP race at 14:00 local time (GMT +2) on Sunday.