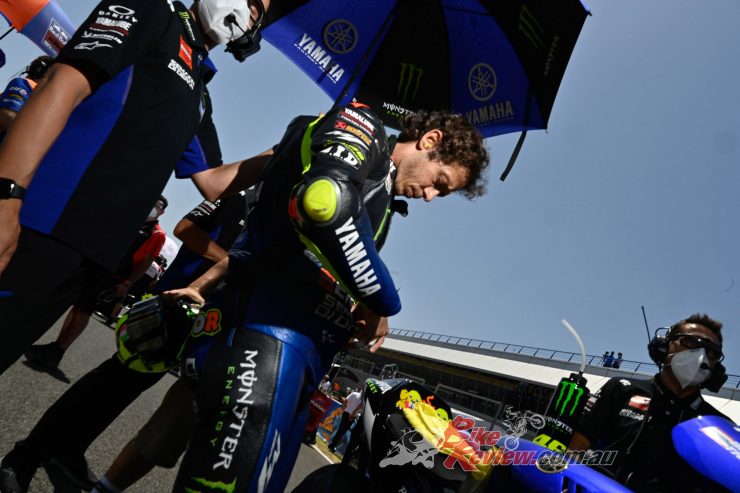 MotoGP Aragon: Rossi out with COVID-19, the battle continues 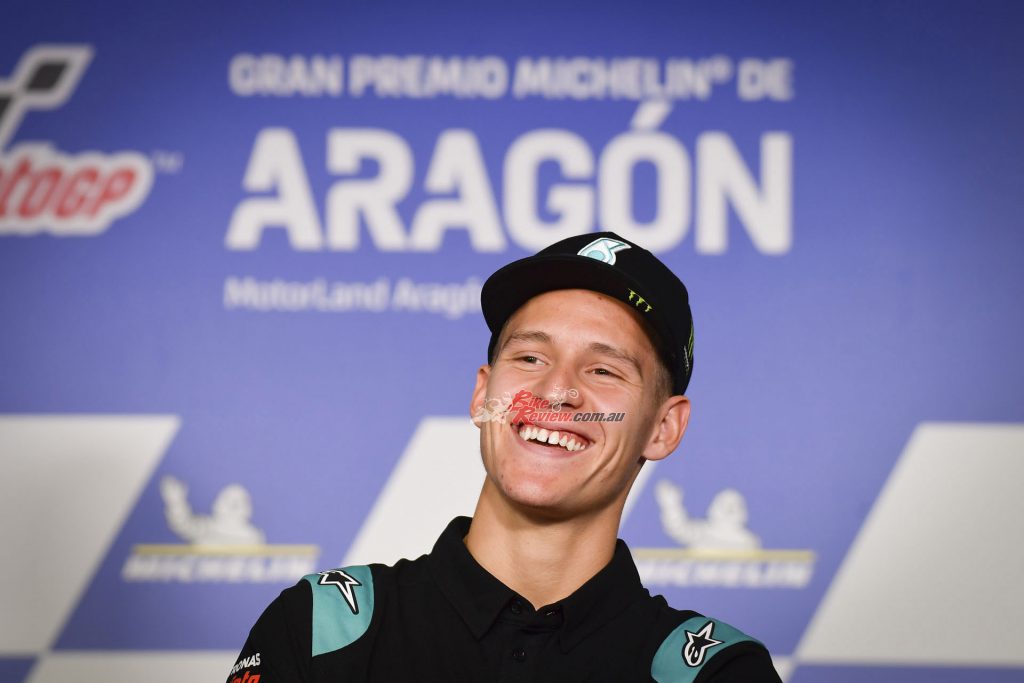 FABIO QUARTARARO: “The Saturday was really good because we had great pace in FP3 and FP4, even in qualifying we went one second quicker than in FP3 but unfortunately it started raining just before the start. I was a little nervous because in FP1 I didn’t feel great with the bike, we went on track with a totally different bike than in FP1 without trying any settings. So we kind of made a bet, it was great. We struggled to warm up the rear tyre to have great confidence but in general we didn’t have a bad race in these conditions. For our first race we learned a lot, the team and me, to where we can improve on the bike. I’m quite happy about the race, of course I wanted the dry conditions but in the end in a Championship, you have these kind of conditions so I can be happy about my race. 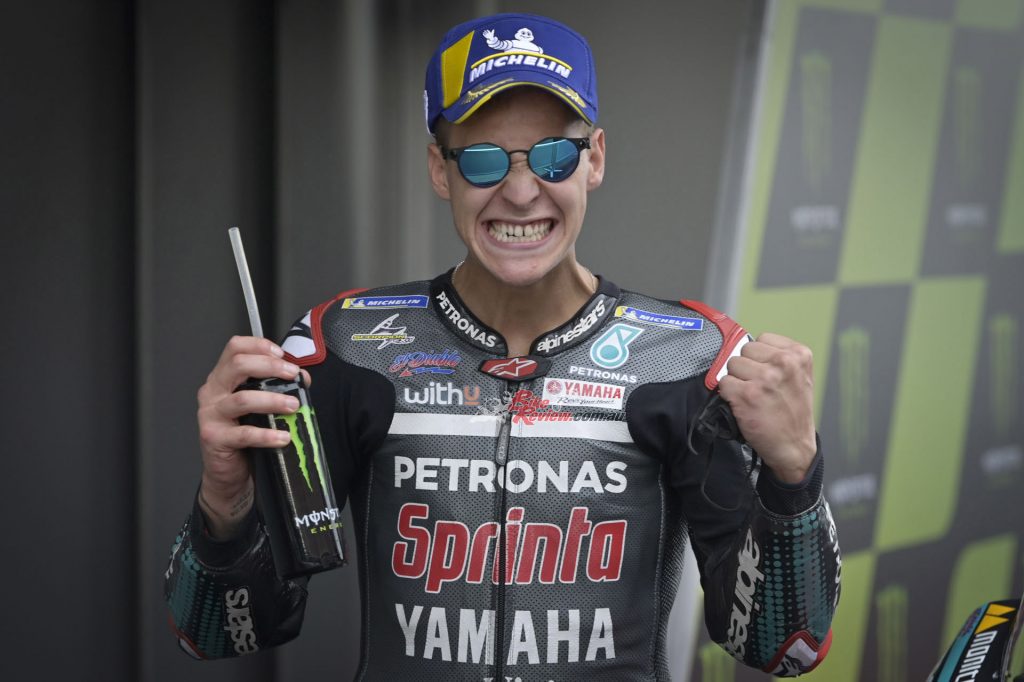 “I expect better here than last year because I think we have great potential. In this crazy year, anything can happen. I feel confident, I’m feeling great on the bike, feeling strong so I will do the best I can to be as fast as possible to make the best results in these two weekends at Aragon.” 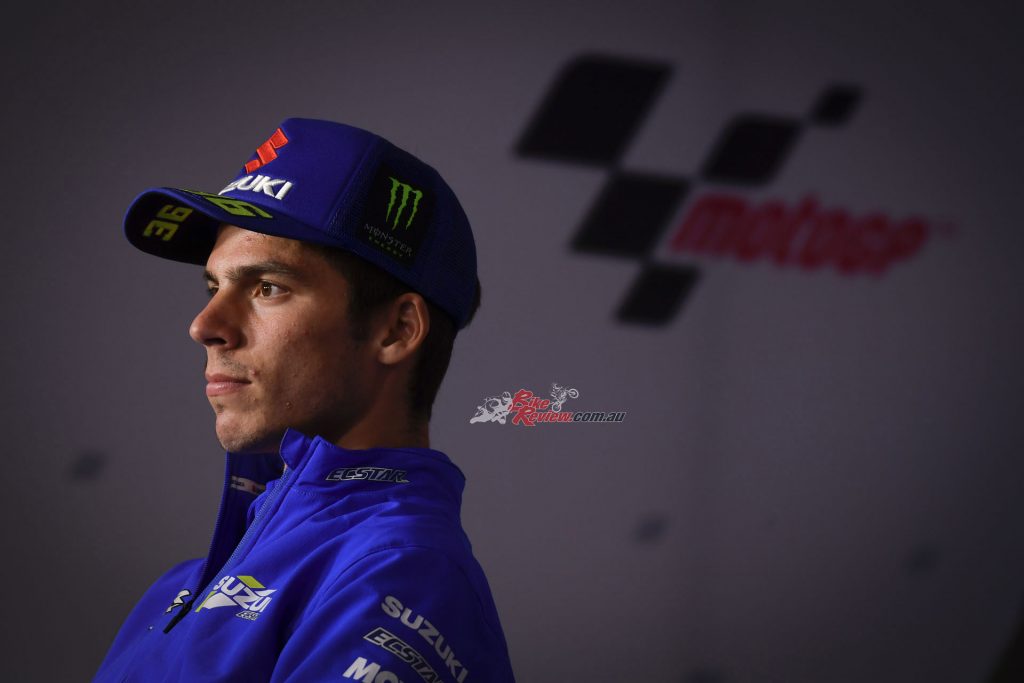 JOAN MIR: “It was not the best weekend that we could have hoped for but in the end, it wasn’t so bad. Honestly, during the weekend I never had a good feeling with the bike. I was never competitive enough. Then on Sunday the first laps I was not able to steer the bike, it was really difficult, but then I got a good pace and was able to catch many riders in front and it was the first lesson in wet conditions so I think we passed the test because of the pace, but the position was not the best one. It was funny to be fighting on the last laps with Fabio and Maverick, but you know, it was a GP we can forget. We passed Le Mans and now we start again. 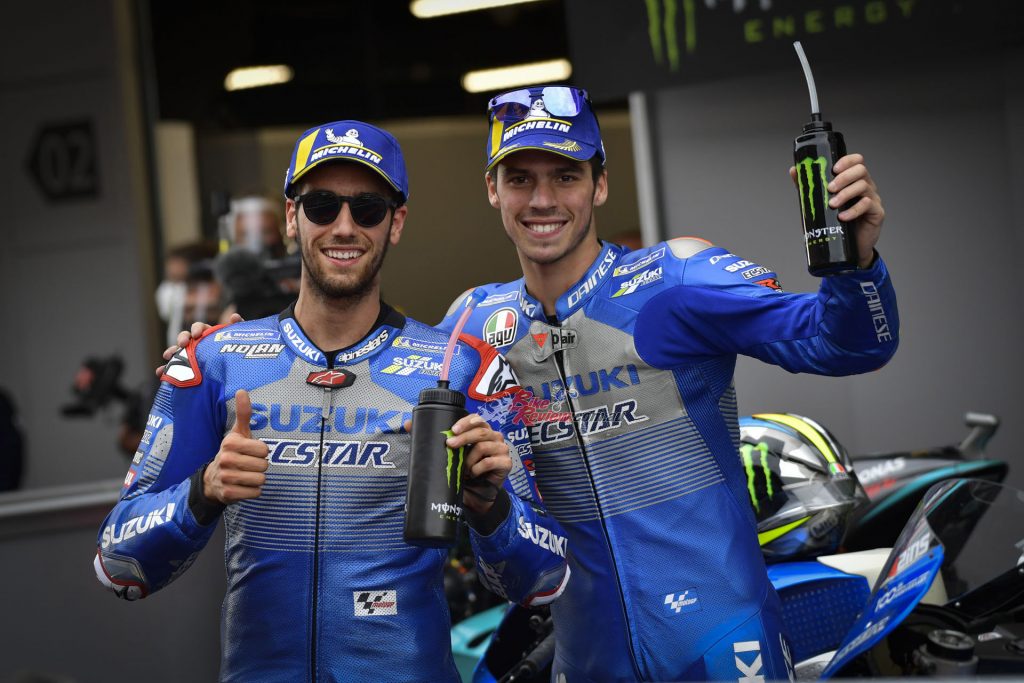 “I think that it can be a good weekend for us here. This track, I remember last year we were quite competitive during the weekend, we just missed the first laps of the race we had some problems, but I feel great and this could be a good track for us also, let’s see. This year you never know till the first day, but I feel it can be a great weekend.” 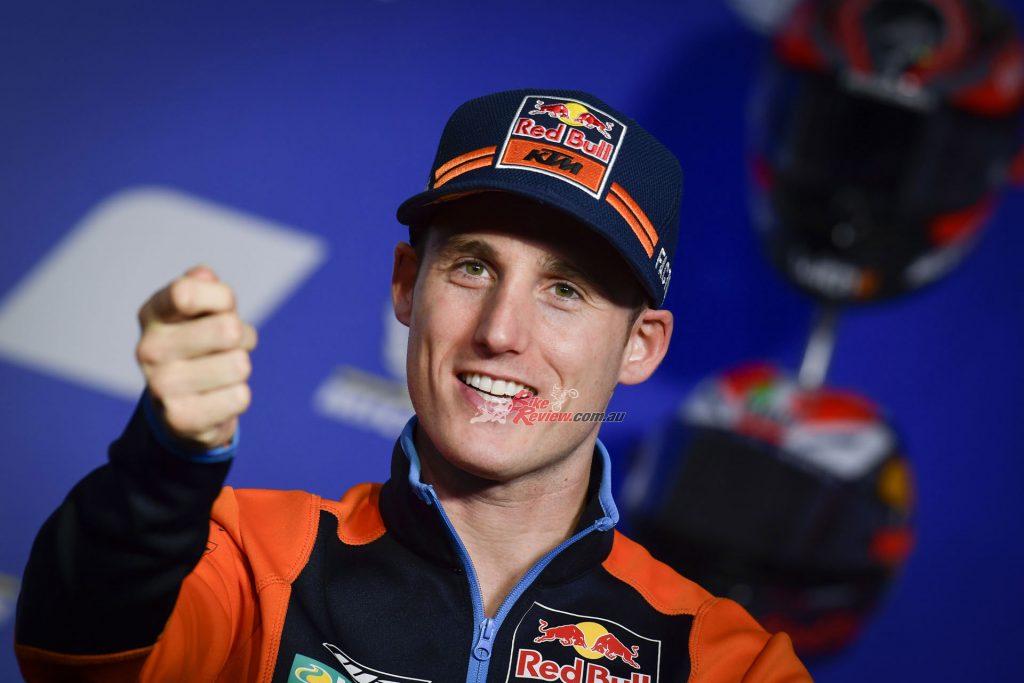 POL ESPARGARO: “It’s been a good weekend last weekend, Le Mans always brings good results to me in the lower categories and in MotoGP in past years so it was pretty crazy, but we took precious points from that race. We come to Aragon where in the past I have also been quite good, I performed well in 125 and won in Moto2 as well and in MotoGP, also not so bad. But in the last two years I suffered injuries here and I could race. But it’s a racetrack that I like to race, especially when the grandstands are full when they come to support the Spanish riders. I really enjoy riding here, I’m looking forward to jumping back on the bike after the results Le Mans. As the weather changes so much with the cold temperatures and the wind is quite strong, let’s see how we can adapt with the tyres first and then see our performance during the weekend. 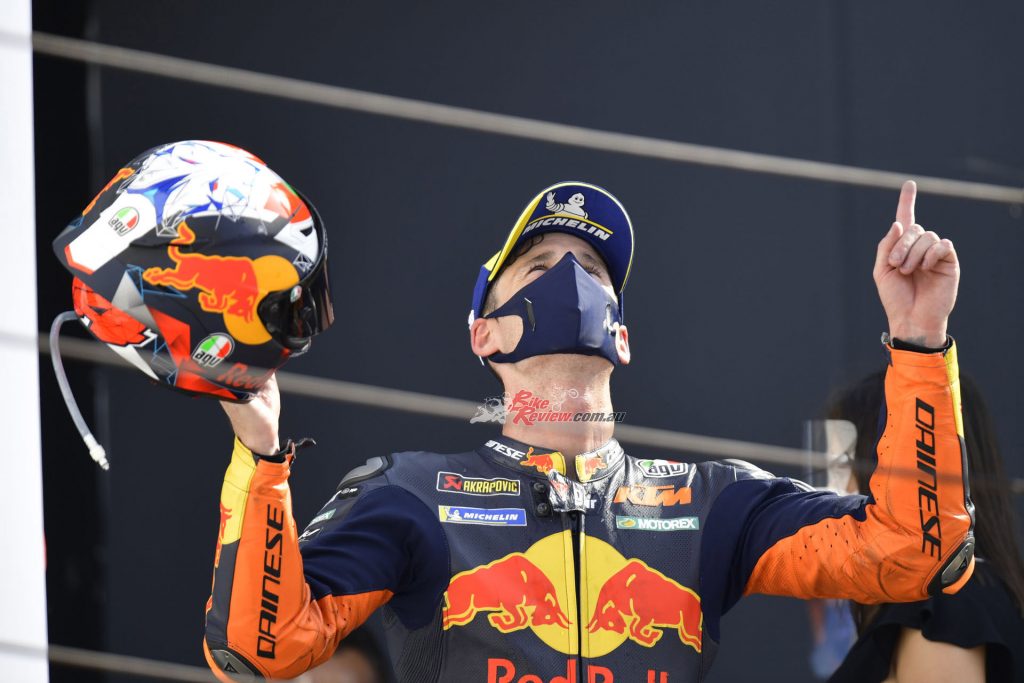 “This year has been unpredictable for all of us, but KTM even more. Our previous years were not as good as this year for sure and we are ding results that we don’t expect. We understand why they’re coming but not 100% because this year the tyres are changing a lot and also the conditions of the track. So, we are trying to manage where the level of our bike is because it’s performing much better than what we expect. Hopefully this weekend will be one of the weekends where we fight for something great, but we need to wait, especially with the front tyre performance. With the cold conditions, I think we can play with the medium tyre which is amazing for us and we can take profit but if we need to play with the soft one, maybe we will miss some performance on the front and not take full profit from our bike. Let’s see how the weekend starts, I really hope for a good weekend, if we do a good result here and in the second Aragon then why not fight for something interesting at the end of the year.” 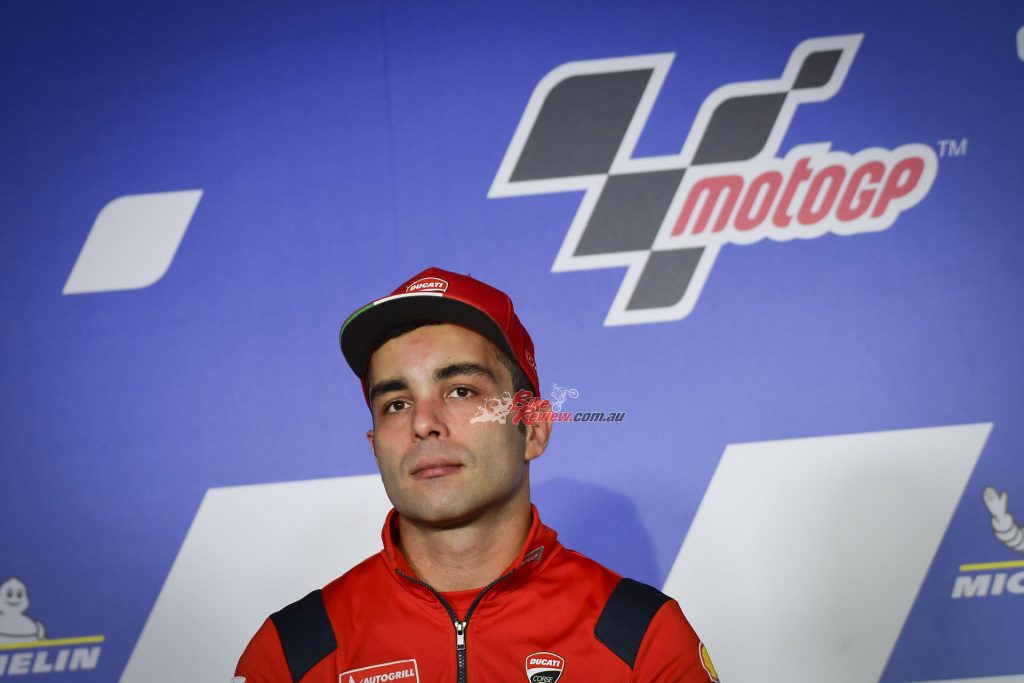 DANILO PETRUCCI: “Last Sunday’s result was a big relief for me. After one year without finishing in the Top 5 it was very nice to win again especially at a track that I like. I always like Le Mans but this year I started to feel better in Barcelona with the bike. The only test we did in Misano, we tried some different things with the bike and some things worked and we were able to improve our set up. For sure I was not happy when I saw the rain on the grid because I could fight for the podium in dry conditions because I felt really good but I said ok it is the same for everyone and then for sure the track was very different, but I think the experience I have in MotoGP made a big difference. Yeah, I can just continue like this with this good feeling and get another good result before the end of my adventure with Ducati but yeah really nice to get this feeling again. 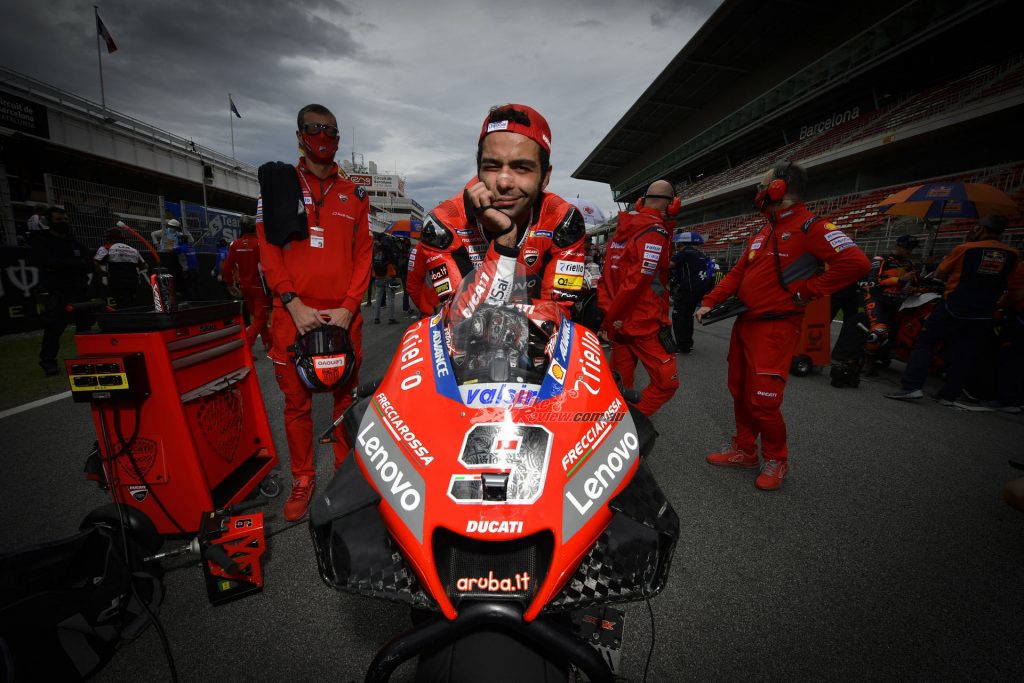 “We found a good balance on the bike and I think it will work here too, but first we have to understand the conditions of the track and especially if the tyres are well good for us or we have to understand which is the best tyre for us because Aragon has always been tricky with the weather conditions because it can be very cold in the morning and hot in the afternoon but I think this year we will see a lot of cold. Hopefully the weather will stop tomorrow because we always suffer a bit with the wind, but I think the important thing is to have a good approach and finally I have the good feeling coming into races and riding the bike and for sure I’m feeling happier than before.” 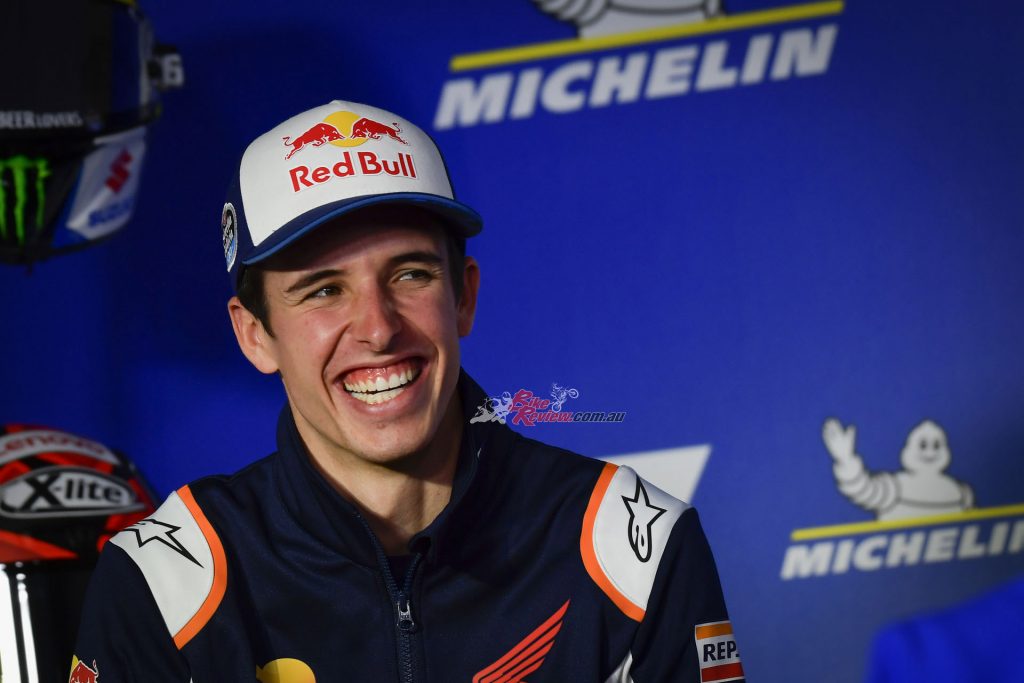 ALEX MARQUEZ: “In the end it’s a good result for us, really important for sure. In the end it’s wet ok but it’s difficult for everyone and you need to adapt. I felt great on the bike so I took the opportunity and I did my best during all the laps because it wasn’t easy but in the end it’s a wet podium, so it doesn’t mean nothing important for me. It’s true that from Misano 2 we have a better feeling, so this podium gives more motivation to keep working and it’s so important for the team. But you know, we are coming in a better way and also in the warm up I was quite fast and consistent so I was happy for that. this gives us more motivation to keep working and keep improving day by day. This is a track that the Honda has gone well at in the past, it’s a track that I like so I will try to make two GPs in a good way and improve day by day. 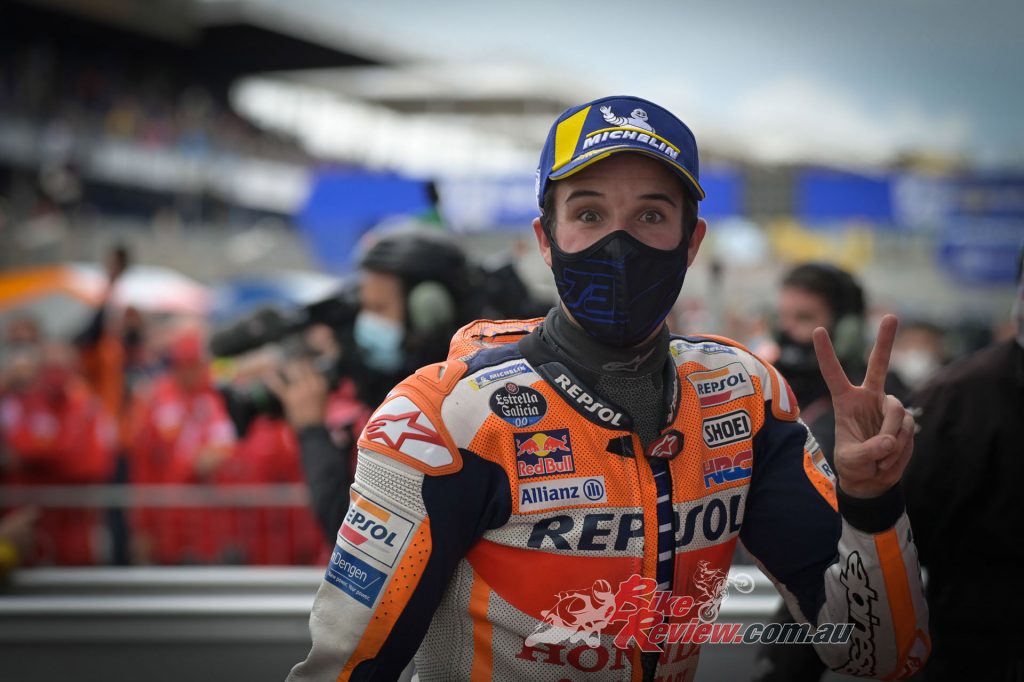 “Qualifying we are still struggling quite a lot. I think it’s the key because on Sunday the pace isn’t bad, but we are losing a lot of time in the first laps compared to the leader. We need to keep improving and keep working, in Le Mans it’s true that in quali I did a step but then I missed the second run because I wasn’t able to improve. But we are coming, we are in a good way to keep working and improving from now until the end of the season. 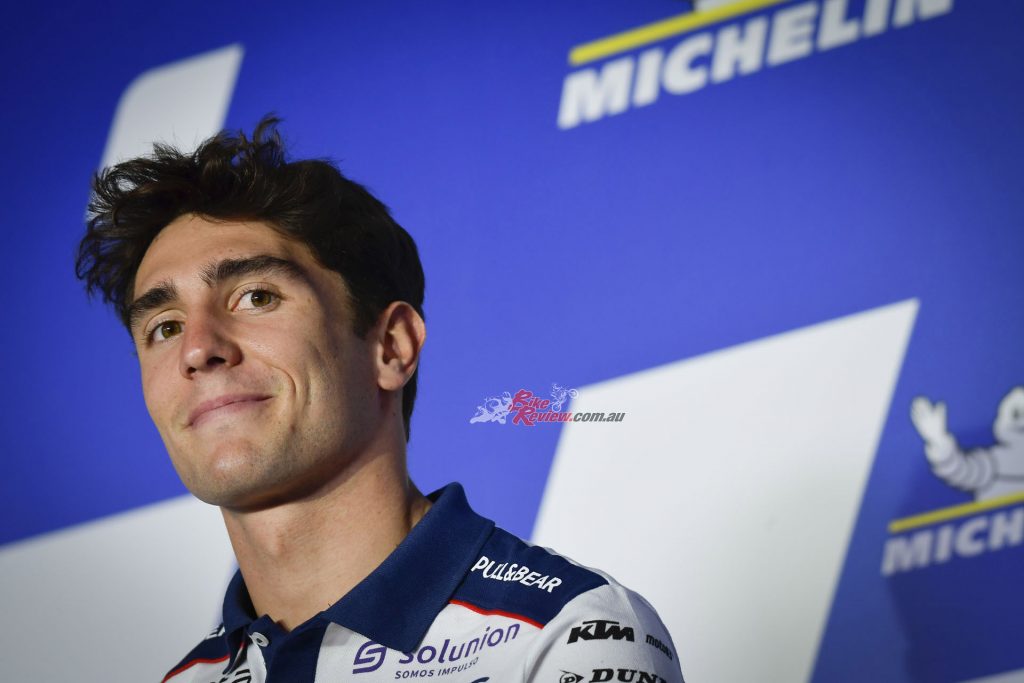 ALBERT ARENAS: “After some difficult races after some bad luck and mistakes, I could be competitive again and get some points in France just before three races in a row was really good and now, we are so motivated. The feeling was good all weekend, wet and dry, we came here with a lot of power and motivation.

“I’m really happy to finally move on to Moto2, I think it came at the best moment, I feel ready, I was eager to jump to Moto2 because I spent many years in Moto3 but now the time has arrived, and I feel 100% ready. To continue with the Aspar team really good for me, I know them, they know me, it’s amazing. Now I can focus 100% on the Championship as one objective is done and now, we are going for the second one…

The nine-time World Champion tested negative on Tuesday but then felt unwell on Thursday morning. He was confirmed as positive for Covid-19 thereafter, on Thursday afternoon. Rossi is at home in Italy and has not been in contact with anyone present at MotorLand Aragon. 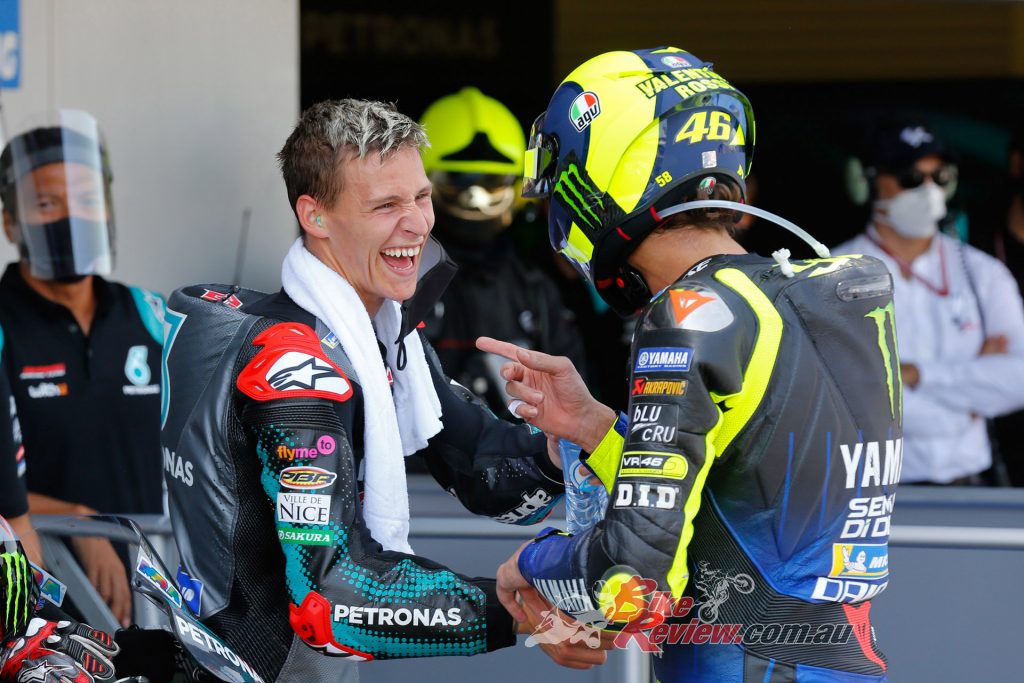 Valentino Rossi: “Unfortunately, this morning I woke up and I was not feeling good. My bones were sore and I had a slight fever, so I immediately called the doctor who tested me twice. The ’quick PCR test‘ result was negative, just like the test I underwent on Tuesday. But the second one, of which the result was sent to me at 16:00 this afternoon, was unfortunately positive. I am so disappointed that I will have to miss the race at Aragon. I’d like to be optimistic and confident, but I expect the second round in Aragon to be a ’no go‘ for me as well… I am sad and angry because I did my best to respect the protocol and although the test I had on Tuesday was negative, I self-isolated since my arrival from Le Mans. Anyway, this is the way it is, and I can’t do anything to change the situation. I will now follow the medical advice, and I just hope I will be feeling well soon.”