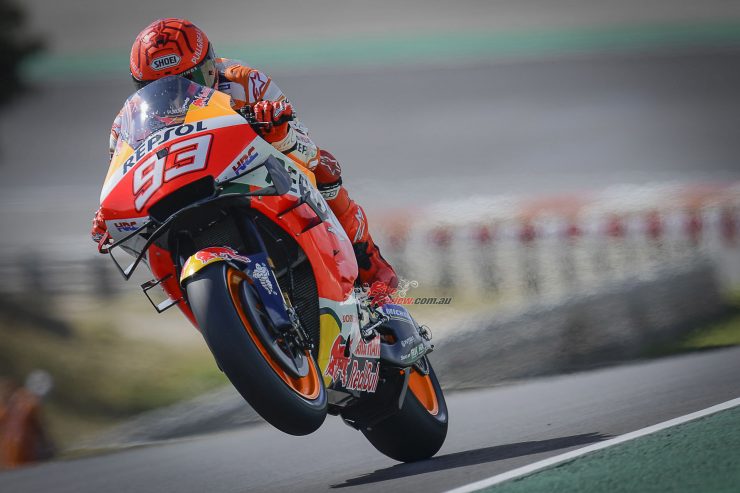 Day 1 at the Grande Premio 888 de Portugal belongs to Francesco Bagnaia as the Italian put together a pretty imperious performance to end the day fastest on the combined timesheets while Marc Marquez finished an incredible sixth fastest after nine months away! 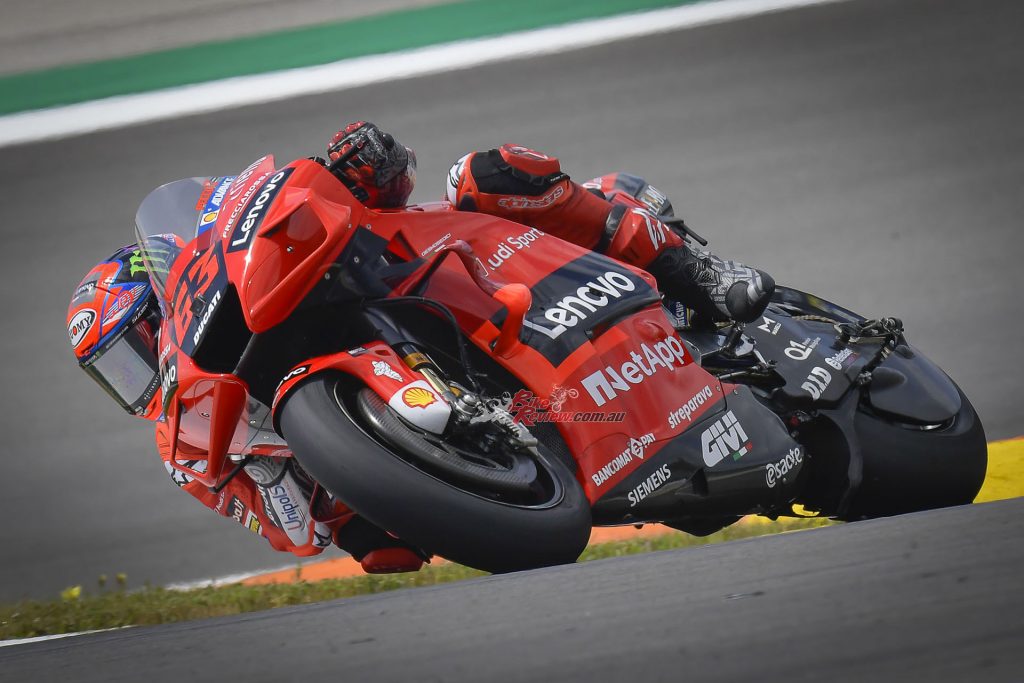 From wet patches in FP1 to a fully dry FP2, the Italian was a force to be reckoned with most of the time he was on track, with red sectors aplenty. He ends Friday three and a half tenths clear of Fabio Quartararo (Monster Energy Yamaha MotoGP), with reigning Champion Joan Mir (Team Suzuki Ecstar) taking third overall. The headlines were stolen a little, however, by the return of eight-time World Champion Marc Marquez (Repsol Honda Team)… and it was quite a return. 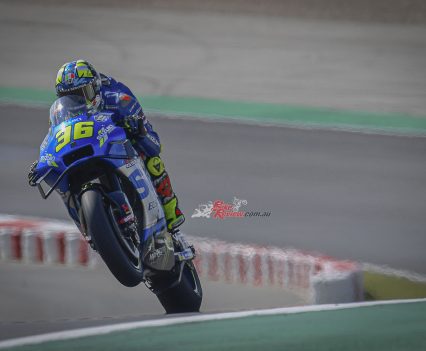 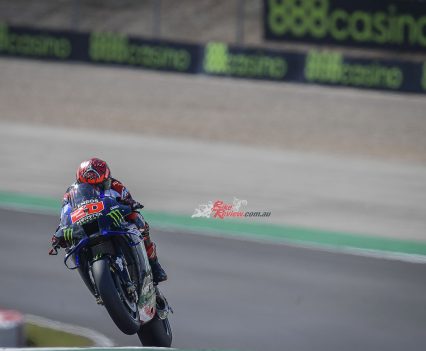 Listening to the number 93 in his pre-event Press Conferences, it seems he had just as many questions as everyone else regarding his return from injury nine months after his crash in Jerez. And Friday gave us a few answers. In FP1 Marquez was third overall and only lost out on the top spot after two very late lunges from Alex Rins (Team Suzuki Ecstar) and Maverick Viñales (Monster Energy Yamaha MotoGP), and by the end of play the Repsol Honda rider was sixth. Happy, fast, and with a few questions remaining about his stamina as could be expected… but as exciting to watch as ever. 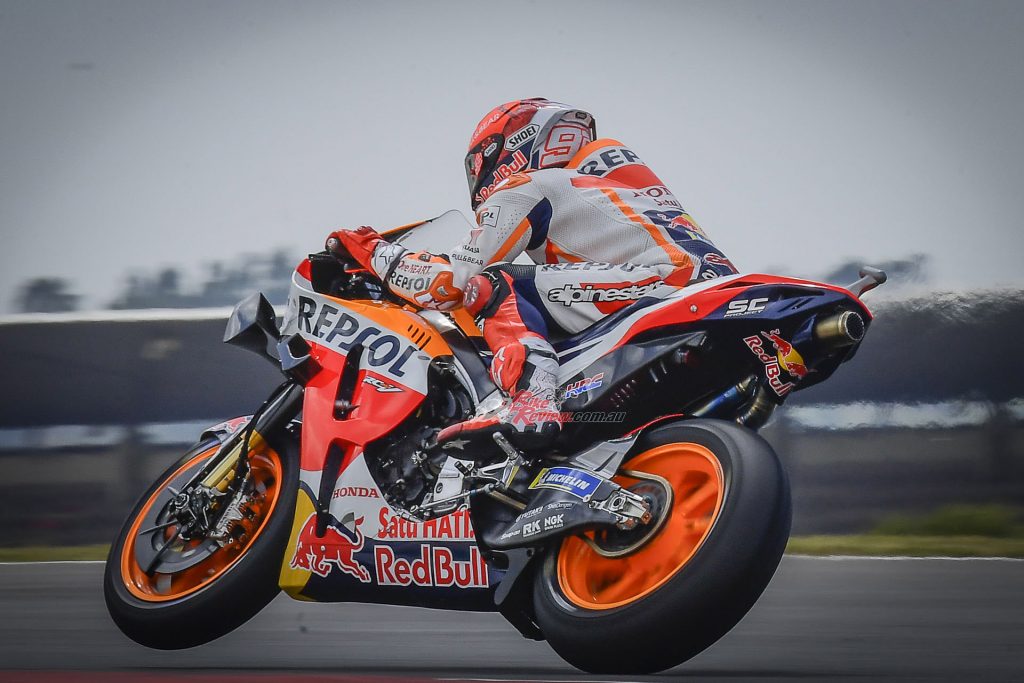 The first lap was a steady one, before the number 93 started to reel in those ahead of him as Bagnaia trolled those taking it steady with some consistent attacks on the top. With the damp patches still very much playing a part it wasn’t ideal for anyone least of all a rider coming back after nine months on the sidelines, but as the final few flashes of pace emerged in the last few minutes, Marquez most definitely had speed. Cranking it up to take over at the top with only moments remaining, it seemed like the fairy tale initial headline could be about to come true. But no, Rins first and next Viñales did enough to deny the eight-time World Champion by a couple of tenths.

FP2 similarly bubbled to a fast lap mad dash, although with the weather expected to remain pretty fair for the rest of the weekend – and conditions not changing as much as Qatar – there was a little less fervour than what we saw a couple of weeks ago. Nevertheless, there were some solid time attacks and Marquez was back amongst it. He ran off at Turn 1 and had a couple of twitches on his way to sixth, but a threat at the front he seems to remain… Jaws music, anyone? 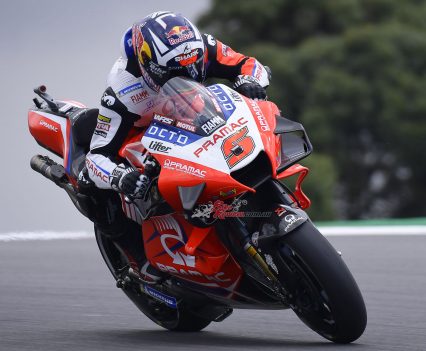 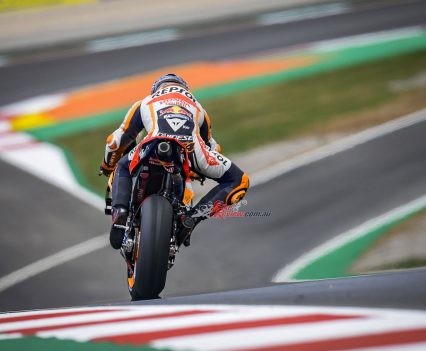 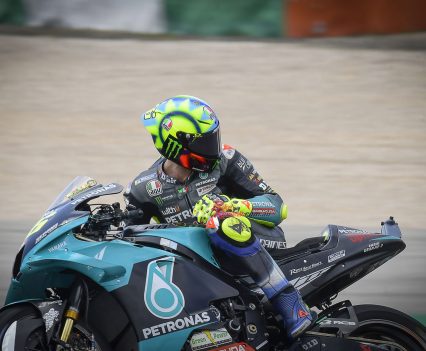 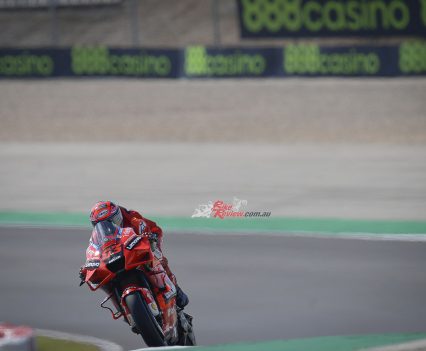 Between Mir in third and Marquez in sixth, Rins slots into fourth as both Team Suzuki Ecstar machines enjoyed a good start to the weekend, looking to make amends for a difficult GP on the Algarve last year. Jack Miller (Ducati Lenovo Team), despite arm pump surgery ahead of the weekend, was fifth on Friday as he returns to the venue of his most recent podium, and the Aussie was only 0.008 off Rins ahead of him. Marc Marquez’ sixth, meanwhile, was decided by just 0.003 as Miller pipped him by the smallest of margins. 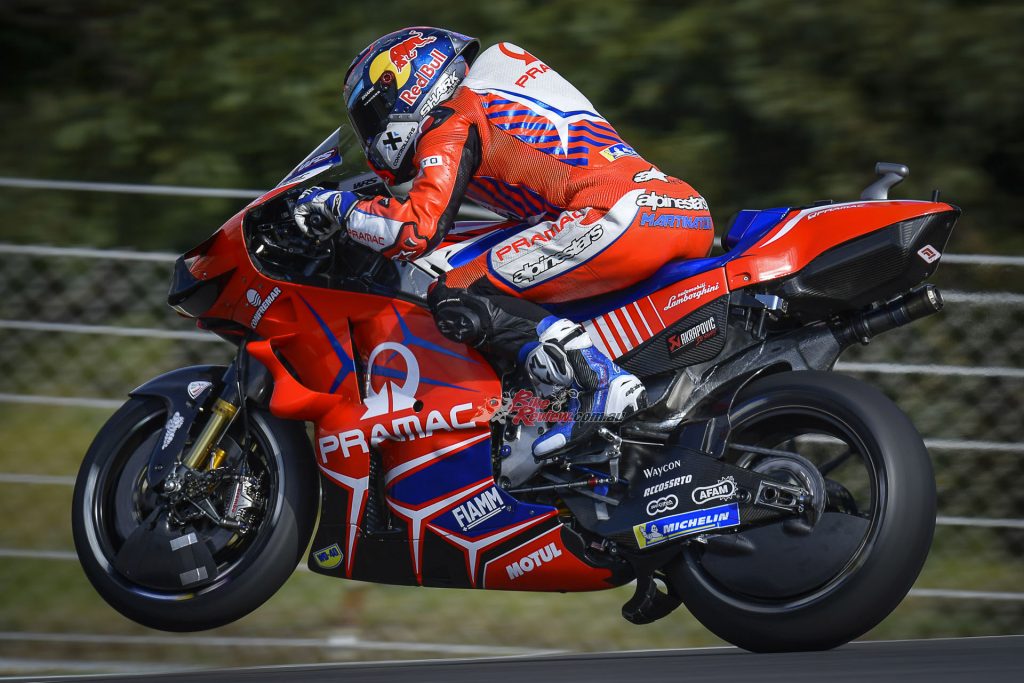 Viñales, after topping FP1, was seventh and 0.560 off the top, ahead of top Independent Team rider Johann Zarco (Pramac Racing) by just 0.064. Championship leader Zarco had an interesting end to the day as he suffered a mechanical problem on a practice start and pulled off the track as his bike began to smoke slightly, luckily finding himself in range of a Miller Taxi service as he picked him up and let the Frenchman ride pillion back to the pits. 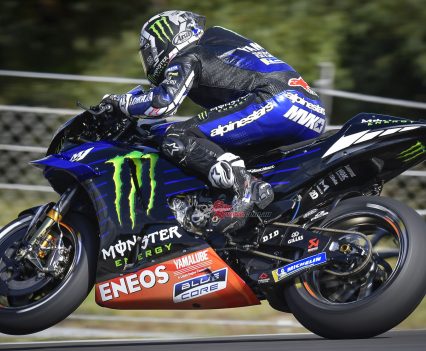 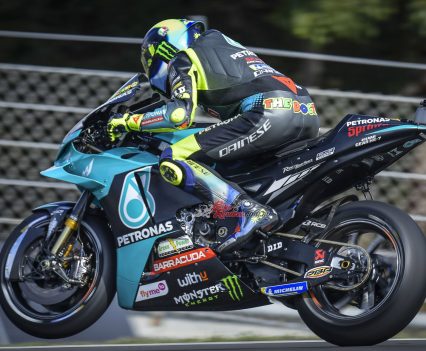 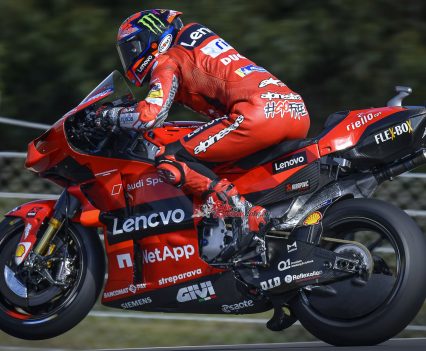 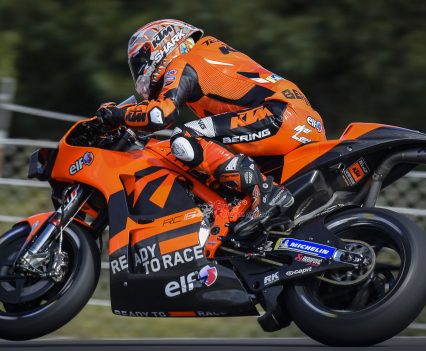 Home hero now and last year as he destroyed the field on his way to the win from pole, Miguel Oliveira (Red Bull KTM Factory Racing) begins the 2021 edition in P9, and within provisional reach of Q2. The last rider currently on to join him is Takaaki Nakagami (LCR Honda Idemitsu), the Japanese rider sneaking in late on despite a monumental crash earlier in FP2. Coming off on the way into Turn 1, the number 30 slid across the run off at speed and is feeling a little sore but was back out later in the session. 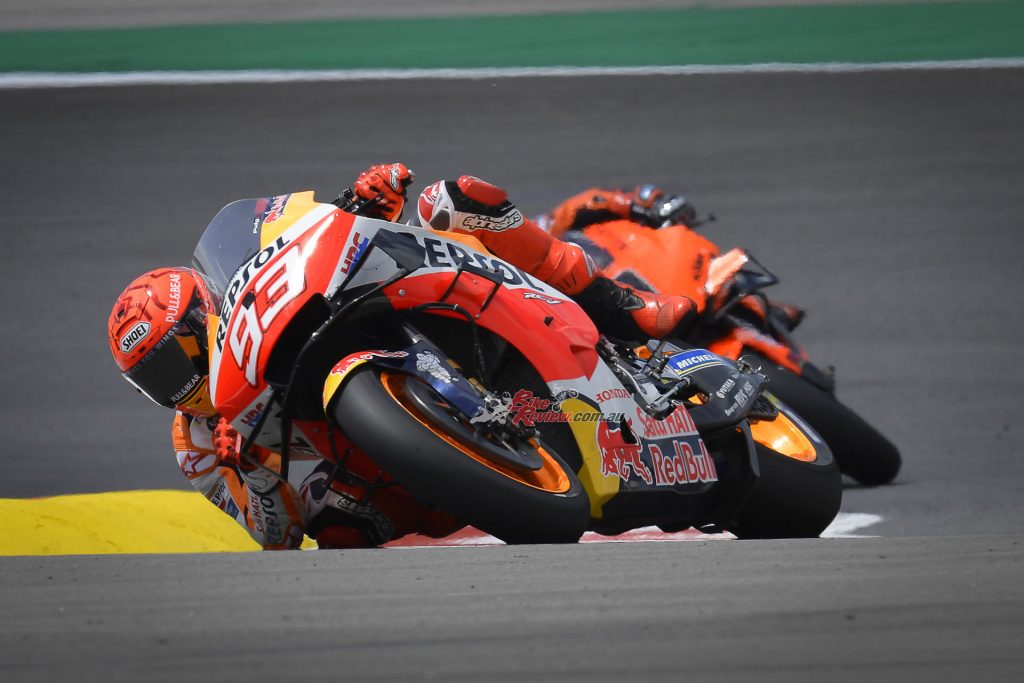 Alex Marquez (Repsol Honda Team) was the rider just denied by his teammate’s last push for the top ten as he ends the day in P11, with Pol Espargaro (Repsol Honda Team) shuffled down to P12 by just 0.011 despite having shown a stronger start to the day, only four thousandths off teammate Marquez in FP1. The top rookie was Luca Marini (Sky VR46 Avintia) as the Italian moved into a provisional top ten and then got shuffled down a few places to a nevertheless still impressive P13, just 0.013 off Pol Espargaro. Aleix Espargaro (Aprilia Racing Team Gresini), meanwhile, was 14th and a tenth and a half further back, with Valentino Rossi completing the fastest fifteen on Friday after a tougher day for the Italian and his teammate Franco Morbidelli, who was P19.

Moto2 Day 1
Joe Roberts (Italtrans Racing Team) was back on top on Friday at the Grande Premio 888 de Portugal, the American fastest in both sessions and pretty comfortably. His 1:43.144 put him 0.317 clear of rookie on the chase Raul Fernandez (Red Bull KTM Ajo), last year’s dominant force at the track in Moto3™, with Aron Canet (Solunion Aspar Team) in third heading up a close and high-profile remainder of the top ten.

With a few damp patches in the morning but Moto2™ getting the best conditions enjoyed by any class, Roberts started how he meant to go on and went fastest in FP1, although he did have some close company as Remy Gardner (Red Bull KTM Ajo) was just 0.041 off. By the afternoon and in full sun though, it was Roberts on top again and the American pulled the pin. He ended the day three tenths ahead of a different Red Bull KTM Ajo as Fernandez leaped into second, with the two enjoying some clear space ahead of the chasing pack. 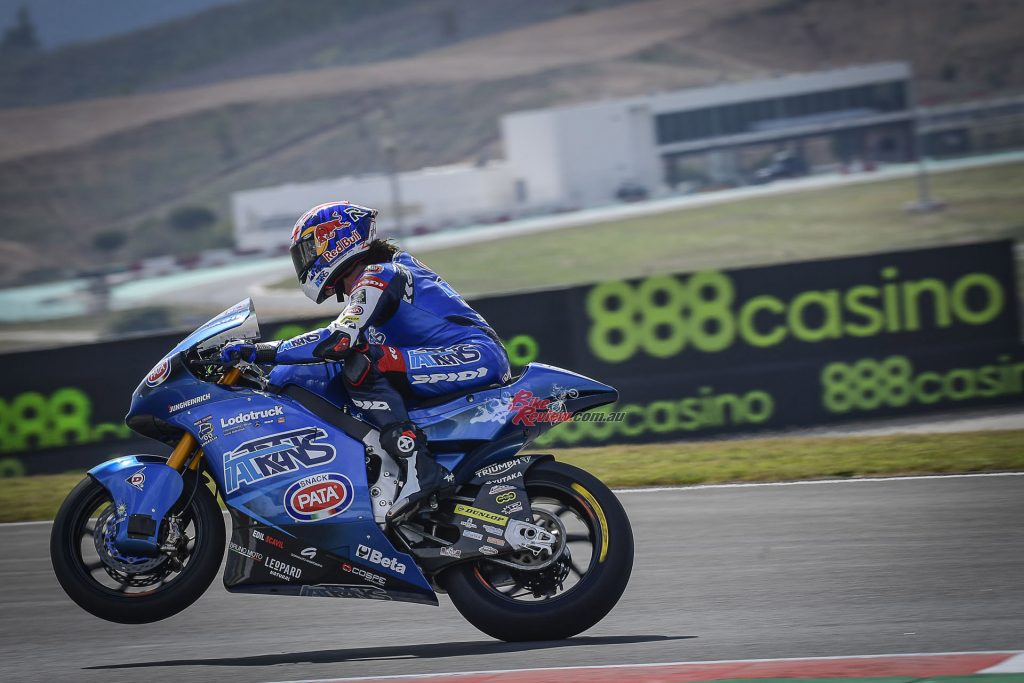 Canet leads that chasing pack, but the gaps make for intense reading. Gardner is fourth just 0.009 back, with Marco Bezzecchi (Sky Racing Team VR46) 0.048 off the Aussie. Hector Garzo (Flexbox HP 40) was back to the form he’d started to show towards the end of 2020 and takes sixth with a deficit of 0.023, and it’s exactly the same gap back to Sam Lowes (Elf Marc VDS Racing Team) in seventh as the Championship leader had a quieter first day on the timesheets. Reigning Moto3™ Champion Albert Arenas (Solunion Aspar Team) had his best day in the intermediate class yet as he took P8 and was just 0.011 off Lowes. Marcel Schrötter (Dynavolt Intact GP) takes ninth 0.028 further back, with Xavi Vierge (Petronas Sprinta Racing) completing the top ten, just ahead of teammate Jake Dixon.

Yari Montella (Lightech Speed Up) had an impressive Friday. The reigning Moto2™ European Champion struggled somewhat in Qatar but has been much quicker out the blocks in Portugal, ending Day 1 in P12 and after some periods much further up the timesheets too at a track at which he has both good experience and good memories. Augusto Fernandez (Elf Marc VDS Racing Team) and Somkiat Chantra (Idemitsu Honda Team Asia) are currently the last two set to move through to Q2, but it can still shuffle on Saturday morning!

Moto3 Day 1
Gabriel Rodrigo (Indonesian Racing Gresini Moto3) laid down a marker on Day 1 of the Grande Premio 888 de Portugal, pulling out 0.476 on closest rival Andrea Migno (Rivacold Snipers Team) to go fastest on Friday by some margin. Jaume Masia (Red Bull KTM Ajo), the all-time lap record holder in Moto3™ at the Autodromo Internacional do Algarve, completes the top three nearly exactly half a second off the top.

The morning saw the grid greeted with a good few damp patches, with action therefore understandably a little slow to start. It did gradually dry out but not wholly, so all riders improved in a fully dry FP2. Fully dry for the most part at least, with rain starting to spit in the final ten minutes or so – and no one after that able to depose Rodrigo as the Argentinean remained top, although his best was around two seconds or so off Masia’s all-time lap record set in 2020. 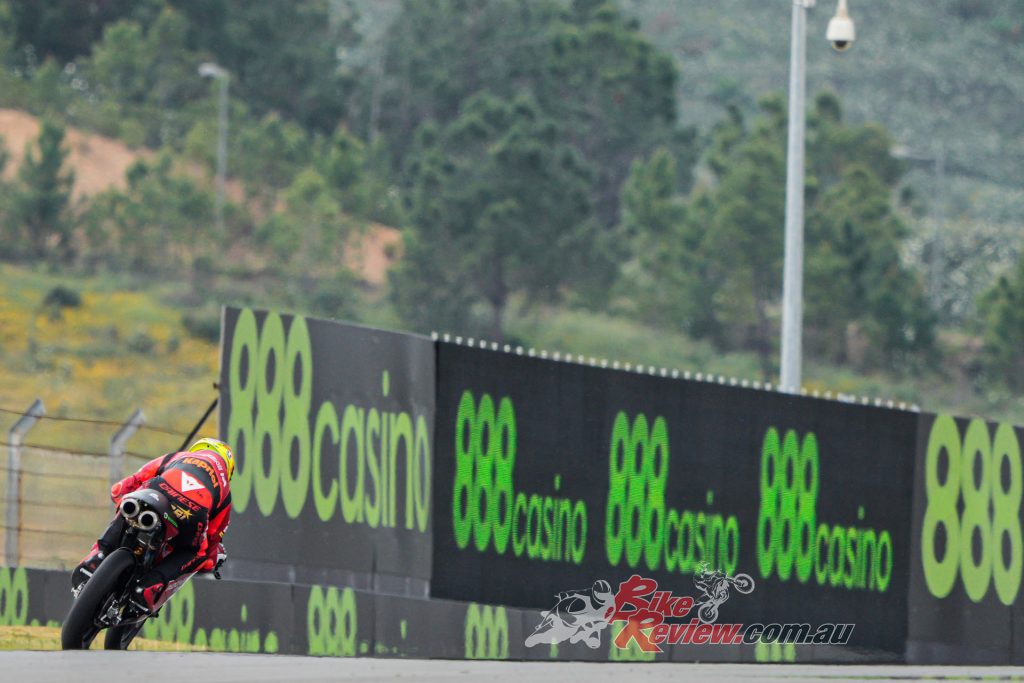 Migno had more of his solid 2021 speed to just pip the aforementioned Red Bull KTM Ajo of Masia, with only 0.028 between the two to compare to Rodrigo’s 0.476 advantage in P1. Sergio Garcia (GASGAS Valresa Aspar Team) slots into fourth another tenth back, with Romano Fenati (Sterilgarda Max Racing Team) in fifth as the veteran’s speed remains despite him having the same experience of the track as most, rather than a chunk more.

Championship leader, rookie and man of the moment Pedro Acosta (Red Bull KTM Ajo) is sixth after Day 1 as he tastes the Autodromo Internacional do Algarve for the first time in the Grand Prix paddock, but he has already won here in the FIM Moto3™ Junior World Championship, which is joyous news for his rivals as he’s once again quick straight out the box. His deficit to Fenati was less than half a tenth, and his gap back to Tatsuki Suzuki (SIC58 Squadra Corse) in seventh a more sizeable 0.114.

Jason Dupasquier (CarXpert PrüstelGP) showed his step forward in 2021 was no flash in the Qatar pan as he was eighth, within a tenth of Suzuki and just ahead of last year’s Portuguese GP podium finisher Dennis Foggia (Leopard Racing) as the Italian took P9. Niccolo Antonelli (Avintia Esponsorama Moto3) completes the top ten fresh from his first podium since 2019 last time out, more fully fit than at any race in 2020.

The weather looks like it may improve for qualifying, but will the lightweight class face another damp patch lottery for FP3? If they do, it’ll be second in the standings Darryn Binder (Petronas Sprinta Racing), Deniz Öncü (Red Bull KTM Tech 3), rookie Izan Guevara (GASGAS Valresa Aspar Team) and veteran John McPhee (Petronas Sprinta Racing) heading through to Q2 directly as they complete the fastest 14 on Friday in that order. In a small twist of fate, McPhee denied Jeremy Alcoba (Indonesian Racing Gresini Moto3) by just 0.029 ahead of their pitlane starts following their spat in Qatar. The Scotsman was also the sole crasher on Friday, rider ok and remounting to head back to the pits.