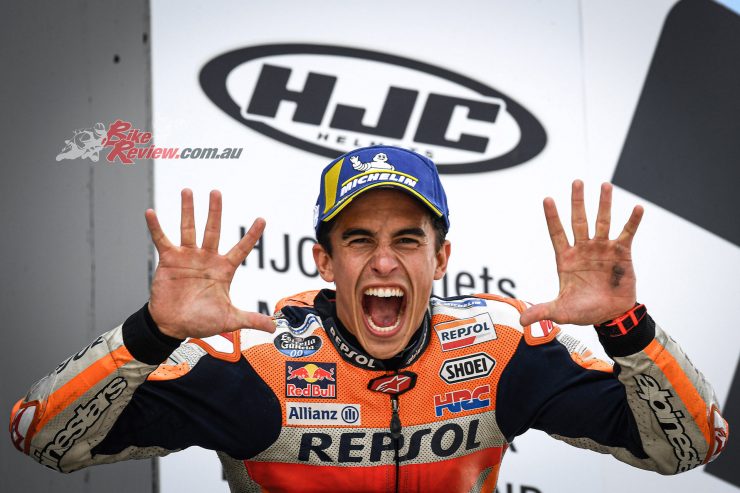 Marc Marquez (Repsol Honda Team) completed a decade of dominance at the Sachsenring in style in the HJC Helmets Motorrad Grand Prix Deutschland, attacking early to take the lead into Turn 1 and not looking back. That makes it ten wins in a row in Germany for the reigning Champion, all from pole, with Maverick Viñales (Monster Energy Yamaha MotoGP) and Cal Crutchlow (LCR Honda Castrol) completing the podium. Marquez’ win for the seventh successive time in the premier class at the Sachsenring also equals Valentino Rossi’s record of premier class wins in a row at one venue, set in Mugello from 2002-2008. 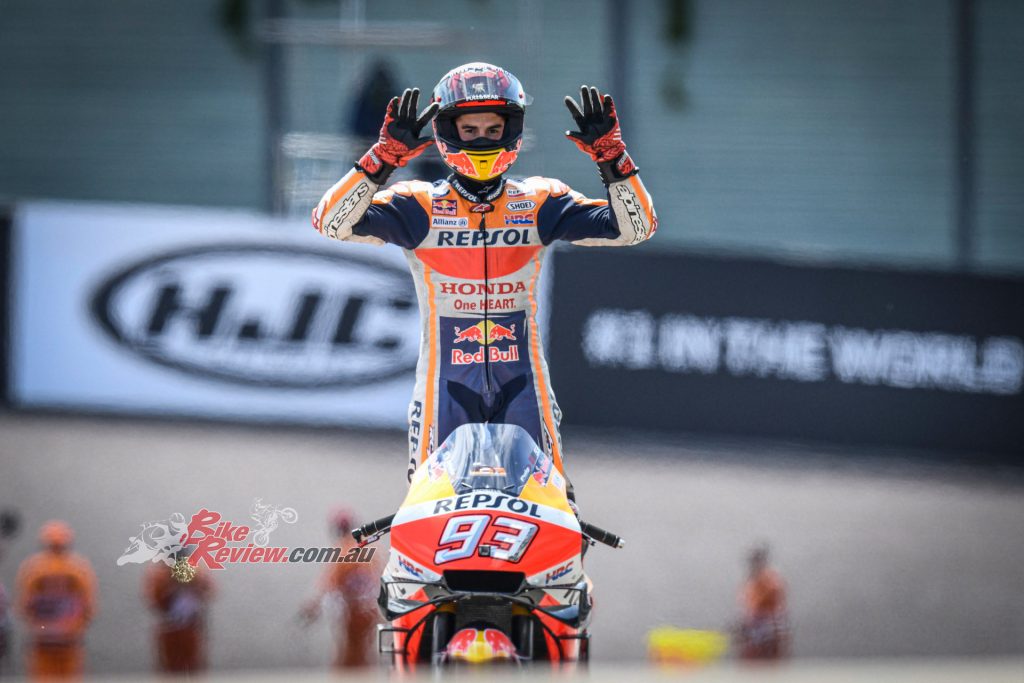 Despite a bad start Marquez kept it pinned into Turn 1, the last of the late brakers able to emerge in the lead as Fabio Quartararo (Petronas Yamaha SRT) slipped back from second to sixth at the start; Viñales, Jack Miller (Pramac Racing), Alex Rins (Team Suzuki Ecstar) and Crutchlow all getting past the Frenchman. The first shot of drama would come from the Frenchman too as Quartararo’s race suddenly ended at Turn 3 on Lap 2,  the rookie going to get back past Ducati Team’s Danilo Petrucci but the front washing away in his first ever premier class crash out of a race.

The battle at the front at that point was more a freight train, with Marquez conducting the pace from Viñales as Crutchlow and Rins demoted Miller down to fifth. The top four started to edge clear of the rest, but edging clear of everyone was King of the Ring Marquez as a 1:21.228 – a new lap record – on Lap 5 saw his lead creep up to just under a second. The man in second was Rins, and he was also stretching his advantage over Viñales and Crutchlow to the same distance, but Marquez was in the groove. 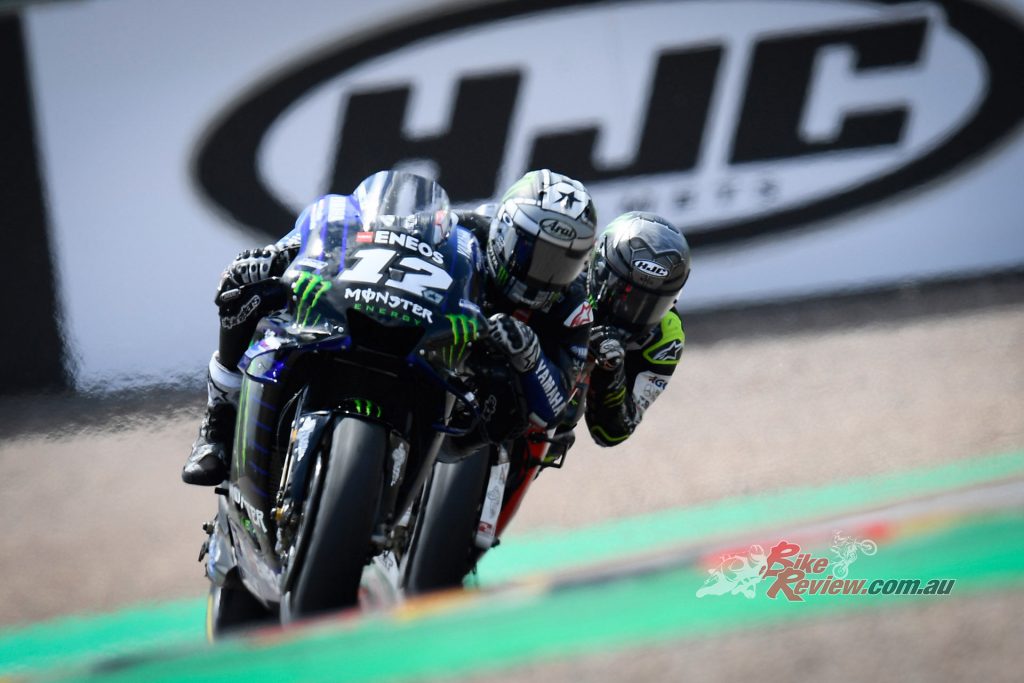 The seven-time Champion showed exactly why the Sachsenring is his playground, not powering away at a rapid rate but instead eking out a tenth here and there, his lead gradually increasing until he suddenly put the hammer down. Lap 10 saw Marquez go 0.4 faster than Rins as the gap rose above the two-second barrier. From then on, there was no stopping the now ten-time Sachsenring winner.

The battle for the second and third steps on the podium was heating up, however. Crutchlow was shadowing Viñales, who in turn was sitting a second back from Rins, with the gap remaining constant between the trio as we passed the mid-stage of the race. And the battle for fifth place was very much on as Ducati Team’s Andrea Dovizioso and Petrucci were going head-to-head with fellow GP19 rider Miller, Joan Mir (Team Suzuki Ecstar), Valentino Rossi (Monster Energy Yamaha MotoGP) and Aprilia Racing Team Gresini’s Aleix Espargaro in a close fight for big points. 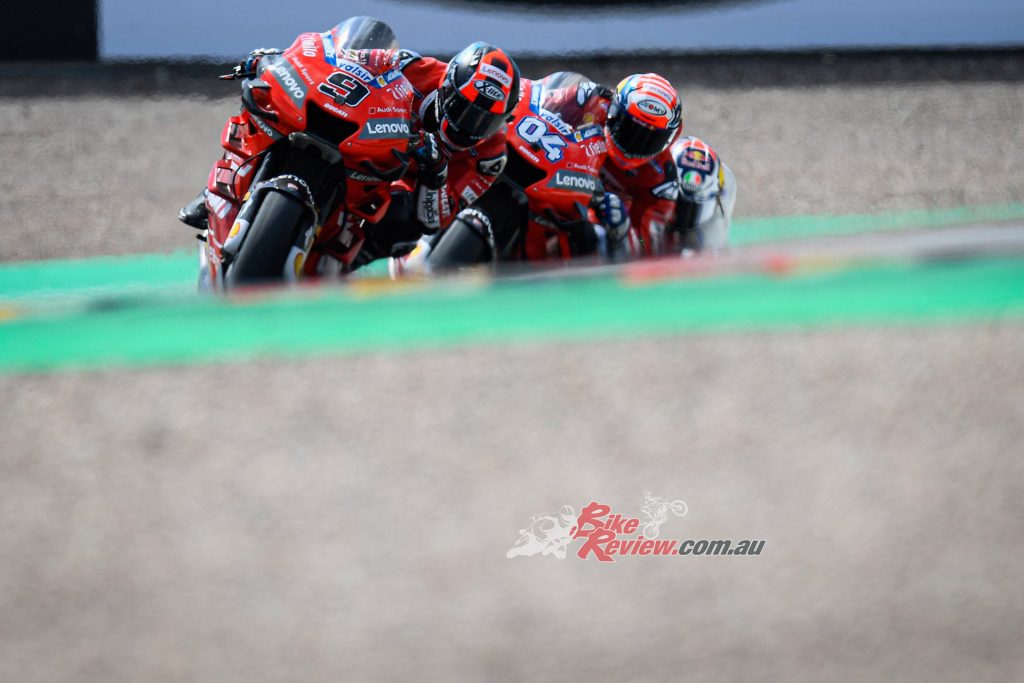 Nearer the front though, disaster then struck at the top of ‘The Waterfall’ for Rins. 0.9 clear of Viñales and Crutchlow, the Suzuki man suddenly skitted out at Ralf Waldmann corner for his second consecutive DNF. With the man on the chase down and out, it left Marquez with an unassailable 4.9 lead.

The last ten laps were just about controlling the gap for Marquez as he saw a 10th Sachsenring win appear ever closer, but who would finish second? Crutchlow had been attached to Viñales’ back wheel for some time to put the Spaniard under pressure and with two laps to go, the duo were separated by nothing. But the number 35 then had a scare at Turn 10; a warning sign that saw Crutchlow running wide and subsequently keeping it calmer to give up the chase. Just ahead, Marquez crossed the line to win his fifth race of 2019, the seventh consecutive year he’s won five or more races in a premier class season – a record that sees him surpass MotoGP™ Legend Giacomo Agostini and nine-time Champion Rossi, both of whom managed to do it for six straight years. 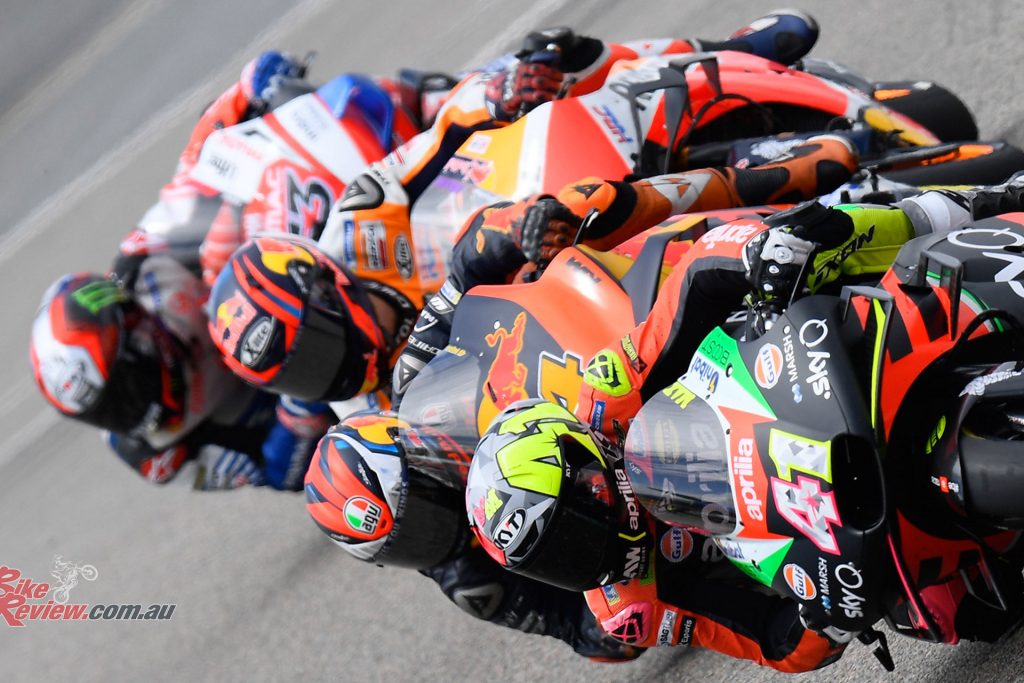 Viñales crossed the line to take his second straight podium, with Crutchlow getting his equal best result of the year in third and his first rostrum since Qatar GP. The Brit’s ride was even more impressive as he battled a torn anterior cruciate ligament and a small fracture to the top of his tibia this weekend following a cycling mishap. Behind the top trio, meanwhile, there were important points in the Championship to be decided just down the road.

Rossi had lost touch on the battle for fourth in the latter stages, and it was Mir vs the three Ducatis. With Marquez out in front, second in the Championship Dovizioso needed to limit the damage as much as possible but Petrucci wasn’t going to let his teammate have it all his own way. The Italians exchanged P4 at the bottom of ‘The Waterfall’ before Dovi went to get back past Petrucci into Turn 1 with three to go and they both ran wide; Miller diving up the inside of both. Dovizioso was aggressive though and attacked the Australian as the battle between the Ducatis went down to the wire, Petrucci leading them onto the last lap. The Mugello winner would ultimately hold fourth as the chequered flag came out, a terrific performance after his big crash in Q2, with Dovizioso producing another fine fight back to take P5 from P13 on the grid. Miller was forced to settle for a solid sixth. 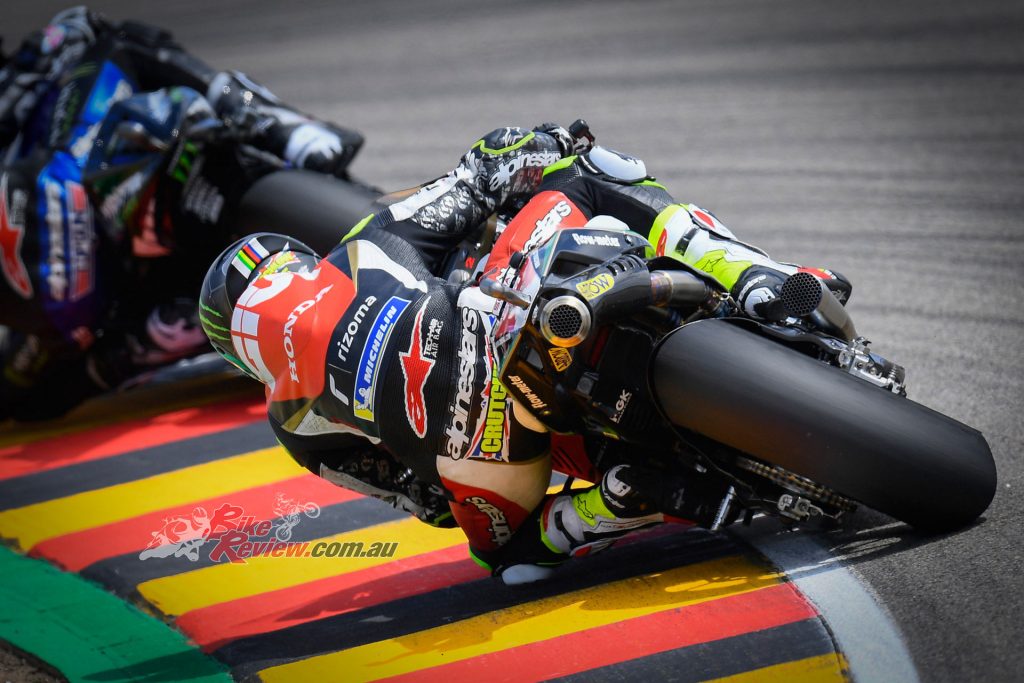 Mir picked up his third consecutive top ten in seventh, a great ride from the rookie, with Rossi ending his run of three-straight DNFs with a P8 at the Sachsenring. Franco Morbidelli (Petronas Yamaha SRT) finished ninth in Germany, the first time he’d raced in the premier class at the track after missing out last year, with Jorge Lorenzo’s replacement Stefan Bradl (Repsol Honda Team) grabbing his second top ten of the season in front of his home fans. 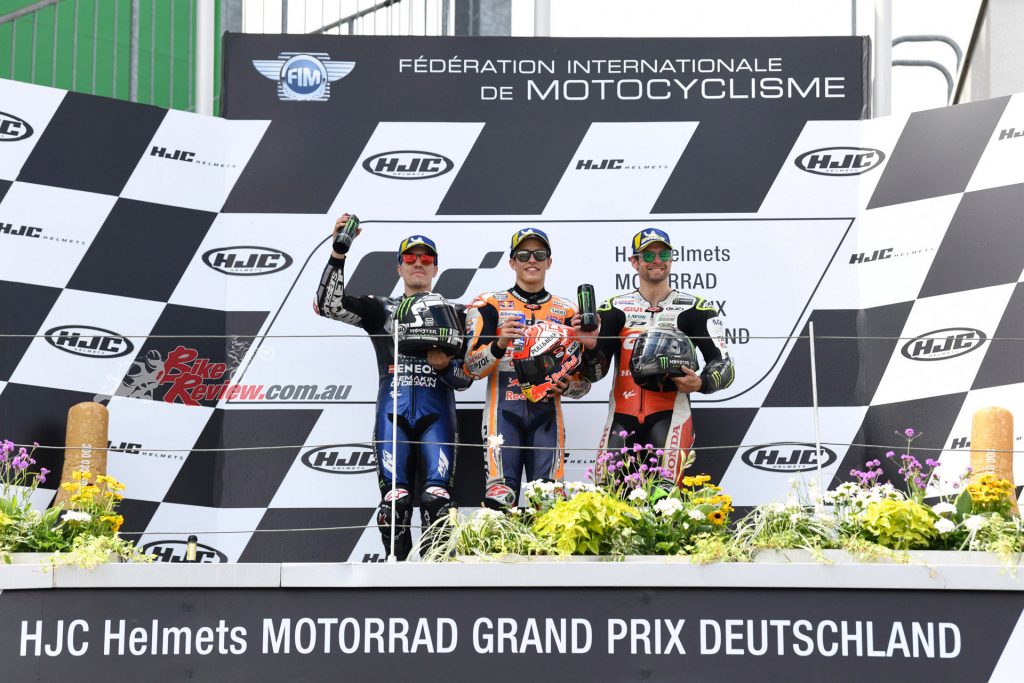 Next up is Brno and it’s a good venues for some key rivals…as well as a few weeks away, giving the likes of Quartararo time to come back swinging. Will the reign continue? The Monster Energy Grand Prix České republiky will decide…

Marc Marquez: “My plan was try to lead from the beginning to the end, that was my mentality. For that reason the start wasn’t perfect but I took a lot of risk in the first corner, I braked so late and I was able to be in there and then the first two laps I was just cruising and trying to understand the limit of the track after the rain. Then when I saw the tyres were ready, I was ready and the bike was ready, then I started to attack. I started to do low 1:21s, that was my rhythm in the first ten laps, and apart from that, when I saw Rins was three seconds behind me, then I started to save the tyre and finish the race.”