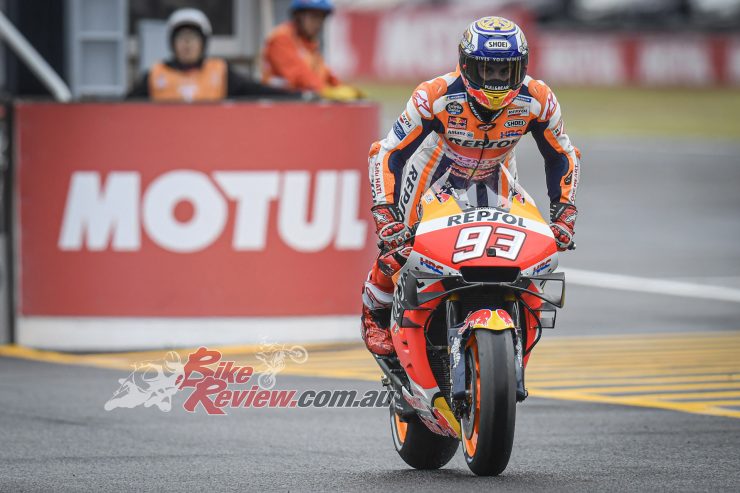 There are few things Marc Marquez (Repsol Honda Team) has not yet achieved, but one of them was a premier class pole position at the Twin Ring Motegi. After achieving the feat in the Motul Grand Prix of Japan, the number 93 ticks another box and has now been on pole in MotoGP™ at every track on the current calendar. That’s every track he’s raced at in the premier class with one exception: Laguna Seca, as now-Honda test rider Stefan Bradl stole the honours in Marquez’ rookie year of 2013. No one was going to do the same at Motegi this season, although Franco Morbidelli (Petronas Yamaha SRT) and teammate Fabio Quartararo came closest, cutting a huge deficit to less than two tenths to complete the front row. 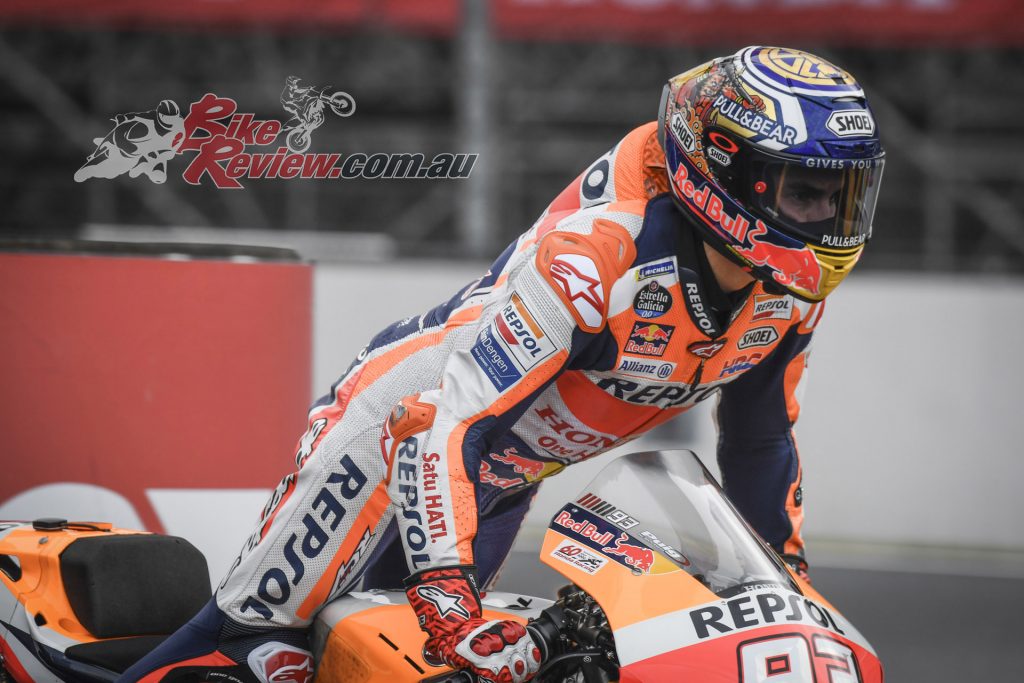 As expected, Saturday dawned wet at the Twin Ring Motegi and that meant direct entry to Q2 was already set, leaving the likes of Morbidelli and Quartararo to the task of getting in some wet track time in FP3. By the time Q1 came around later in the day, however, the track was dry enough for slicks and the fight was on. In the end, Cal Crutchlow (LCR Honda Castrol) and Alex Rins (Team Suzuki Ecstar) headed through, with home hero Takaaki Nakagami (LCR Honda Idemitsu) the man to lose out by just hundredths. 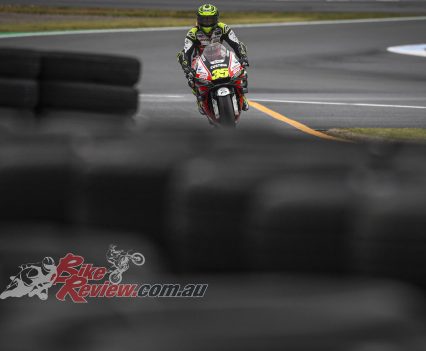 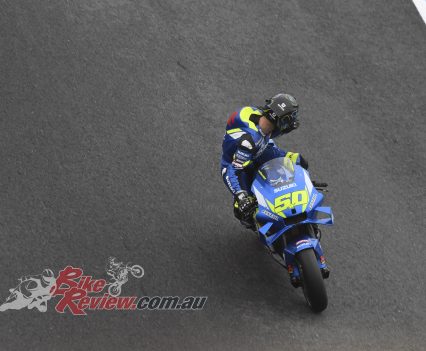 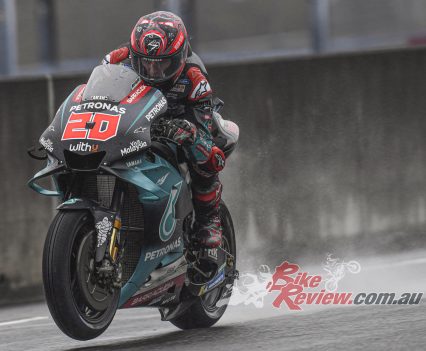 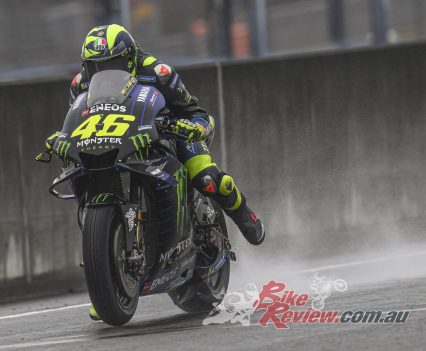 Once Q2 was underway, Marquez set about creating the goalposts and then moving them. On his third lap around the reigning Champion was a second clear of the field before Quartararo just got inside that bracket; initially the only man to do so. Jack Miller (Pramac Racing) then managed to get within half a second and Morbidelli within seven tenths, however, the latter making a clear statement of intent before the majority pulled in to the pits.

On their seconds runs, Quartararo came out guns blazing to get within three tenths before Maverick Viñales (Monster Energy Yamaha MotoGP) took the baton to attack and inched closer, but Marquez seemed unstoppable and about to tick another box in his record book. On his final lap, the number 93 shaved another few hundredths off his laptime too, and ultimately it would prove enough. Morbidelli then shot up to second on his last lap; Quartararo up to third – pushing Viñales back down to P4. That’s three Yamahas in the top four, however. 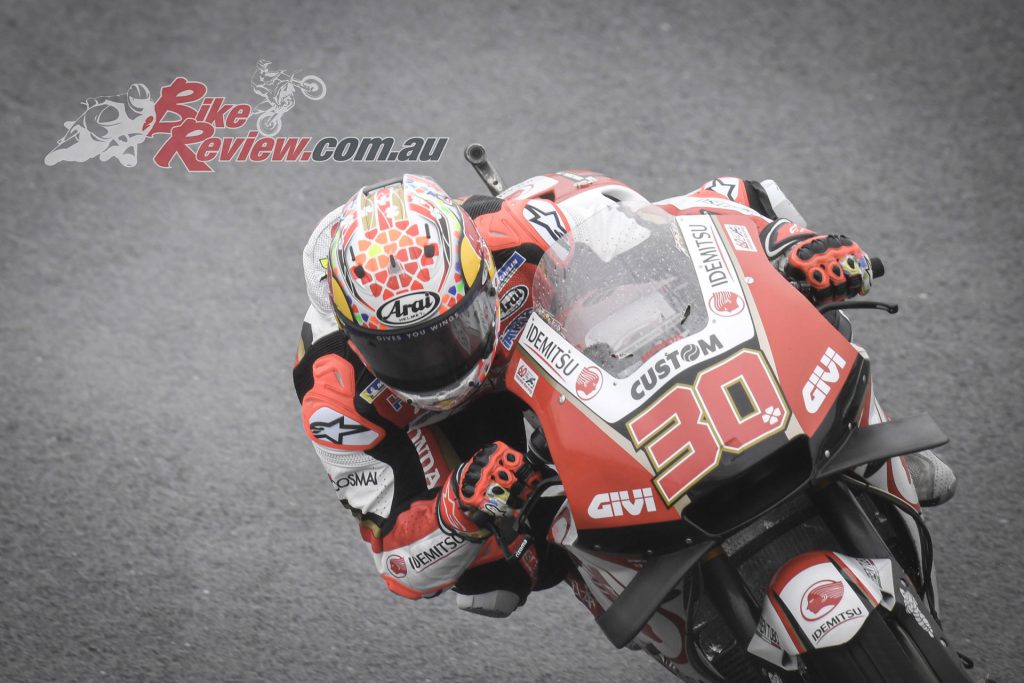 Cal Crutchlow, meanwhile, moved from Q1 to P5 to make it two Hondas in the top five after a last dash improvement, with Jack Miller (Pramac Racing) completing the second row in sixth and top Ducati. The next Borgo Panigale machine was the Ducati Team’s Andrea Dovizioso in seventh as he heads up Row 3 – with ‘DesmoDovi’ only having qualified worse at Motegi twice before: 2017 and his rookie season in the class. But in 2017, from ninth on the grid, he did go on to win…so all is far from lost. Danilo Petrucci (Ducati Team) lines up alongside his teammate, just 0.017 in arrears. 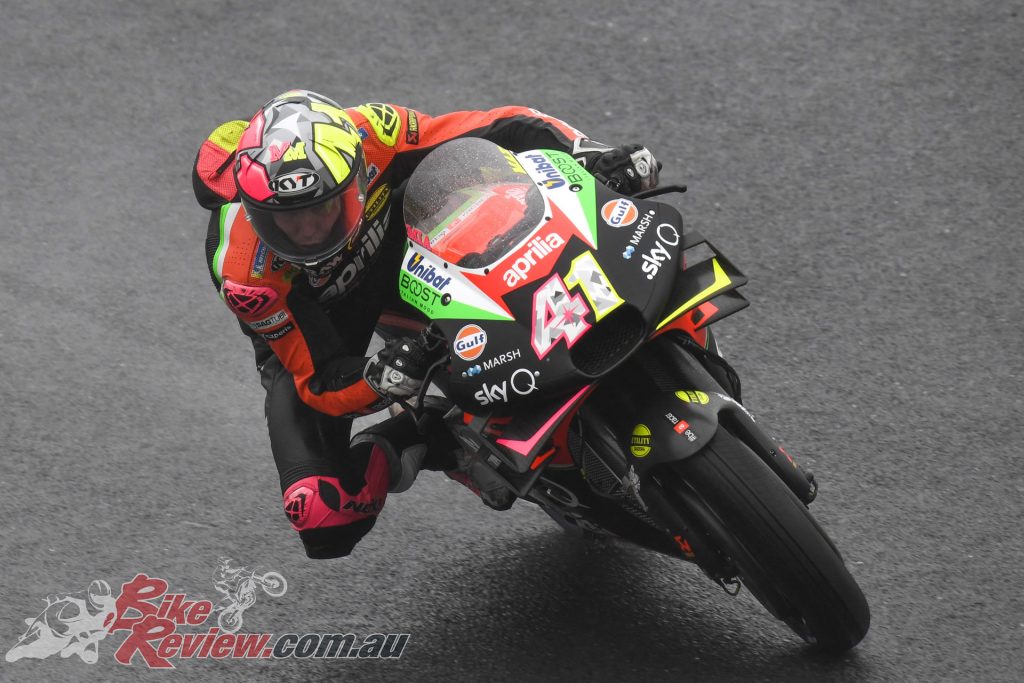 Aleix Espargaro (Aprilia Racing Team Gresini) pulled off a stunner for Noale factory Aprilia in ninth, and he set exactly the same fastest lap as nine-time World Champion Valentino Rossi (Monster Energy Yamaha MotoGP), who found it tougher going than his fellow M1 riders. Rossi is tenth and it’s only the third time on his 20 visits to the track in the premier class he has failed to qualify on the first three rows. 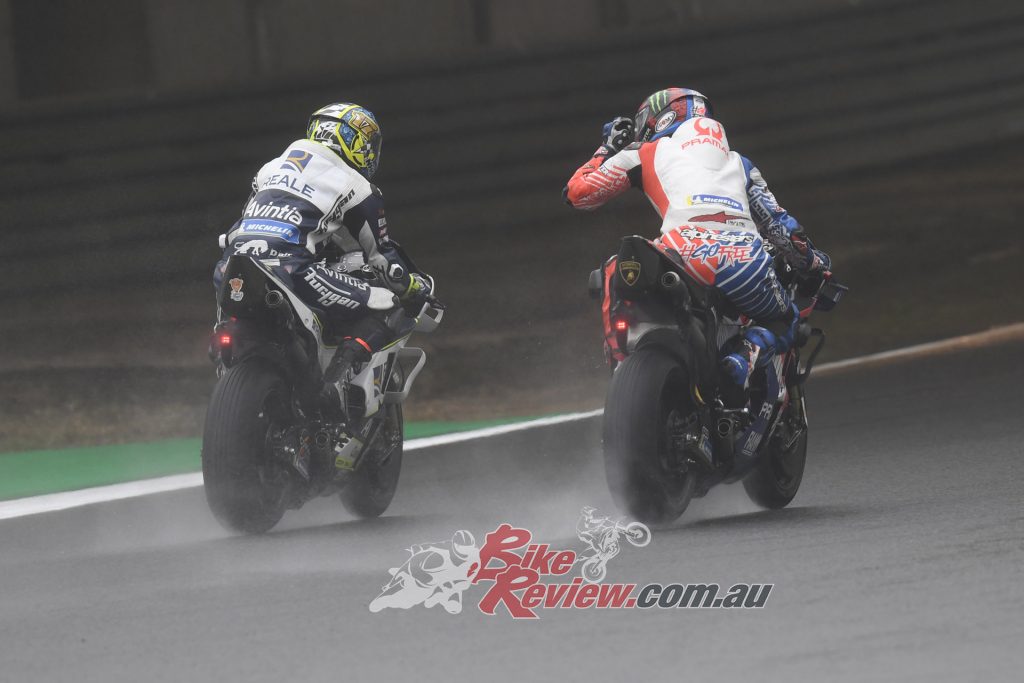 Alex Rins (Team Suzuki Ecstar) was 11th and just 0.042 behind the ‘Doctor’, although the Spaniard did get the better of rookie teammate Joan Mir…by 0.016, the second smallest margin in the top ten. That should make for an interesting battle on Sunday, although the whole grid looks set to assure that – especially as better weather is expect at the Twin Ring Motegi. 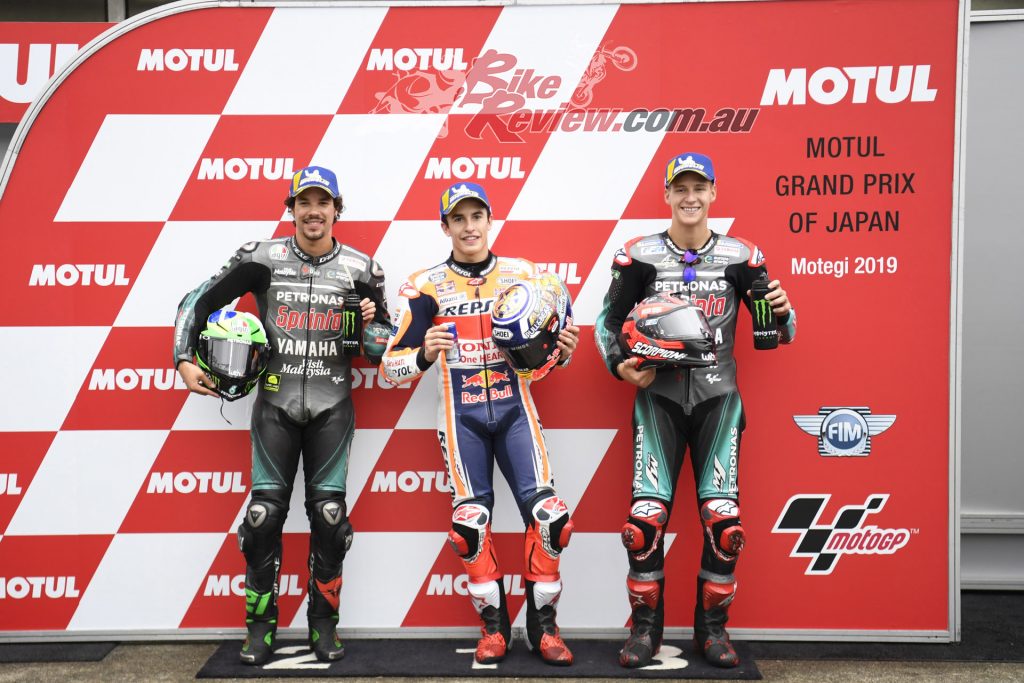 Moto2
Luca Marini (Sky Racing Team VR46) secured his first pole position of the season in sensational style after going over a second faster than anyone else in Moto2™ Q2 at the Motul Grand Prix of Japan; untouchable to head the two FlexBox HP 40 machines of Augusto Fernandez and Lorenzo Baldassarri on the front row. Championship leader Alex Marquez (EG 0,0 Marc VDS) took fourth, but key challenger Brad Binder (Red Bull KTM Ajo) had a tough day at the office as he ended up P18. 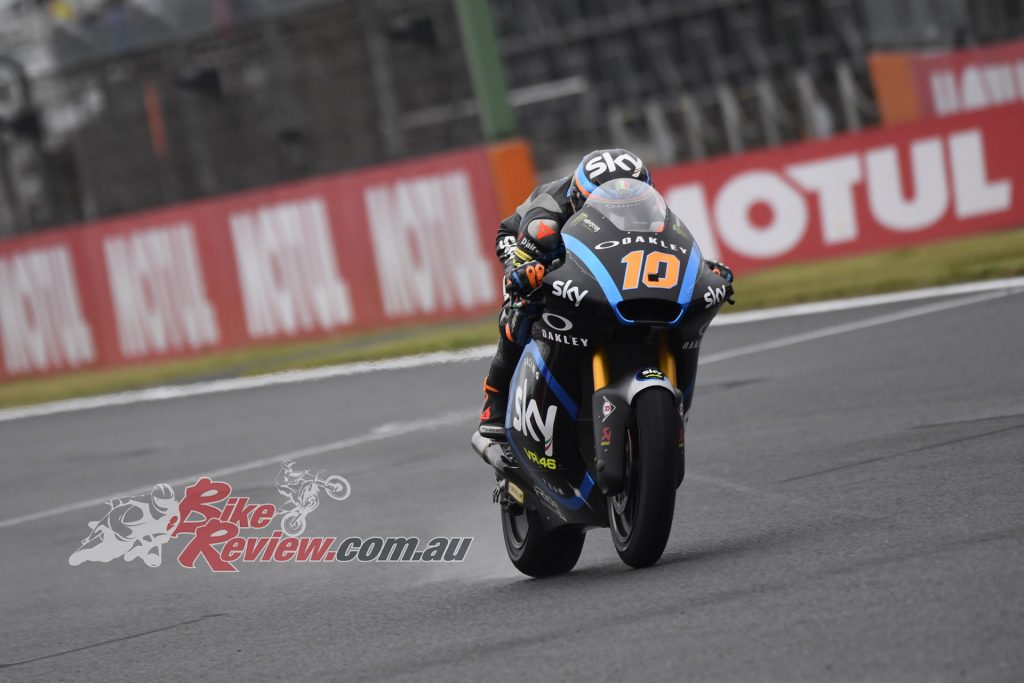 After a morning of rain, rain and more rain – and a jaw-dropping save from Alex Marquez in FP3 – Friday’s combined timesheets remained the decider in Q2 entry, leaving a few key names with some work to do. By the time qualifying came around, however, the rain itself had at least stopped, although wet tyres remained the name of the game. In Q1 it was Remy Gardner (ONEXOX TKKR SAG Team) who set the pace, the Australian going through alongside Jorge Navarro (Beta Tools Speed Up), Marco Bezzecchi (Red Bull KTM Tech 3) and Somkiat Chantra (Honda Team Asia) to take part in the fight for pole.

In that battle, Marini was an immediate presence to be felt, with compatriot Baldassarri initially within a tenth before Fernandez split the two. Marini soon struck back, however, putting himself half a second clear as the likes of Gardner and Binder pitted for slicks. The Italian’s choice to push on proved right though, with his next lap putting him another four tenths further ahead. 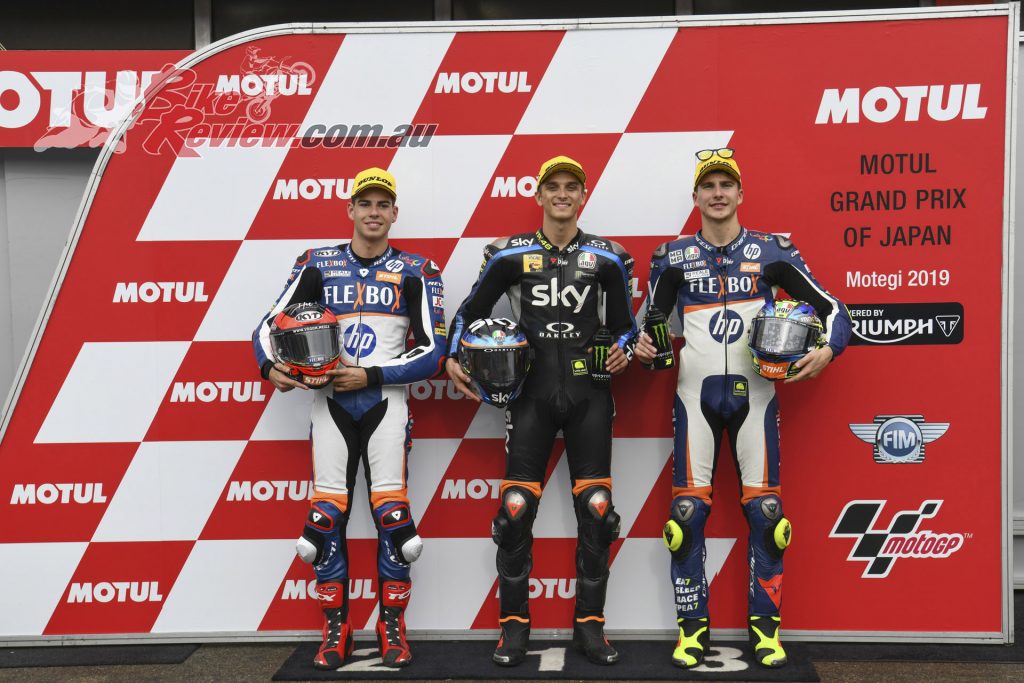 Marquez moved up to take his P4 late on, and he’ll be joined on the second row by Q1 graduates Navarro and Chantra as heading through the first session once again seemed to be no hindrance in the wet. Chantra also took his second best result of the season despite a crash. Tom Lüthi (Dynavolt Intact GP) qualified P7 at a track that’s seen him take two previous wins; the Swiss rider just ahead of Marco Bezzecchi (Red Bull KTM Tech 3) who put in a late personal best lap for his second best qualifying performance of the season despite having encountered an issue with his machine halfway through Q2.

Home hero Tetsuta Nagashima (ONEXOX TKKR SAG Team) starts 16th on home turf, and Binder’s even further back in P18 after a tough day for both. Nagashima will want some home glory on hopefully better weather on Sunday, and Binder will itching to move forward as he fights for the Championship. If there’s one thing we’ve seen the South African do before, however, it’s win from the back.

Moto3
Niccolo Antonelli (SIC58 Squadra Corse) returns from injury this weekend, and what better way to celebrate than taking pole? In a rain-soaked qualifying for Moto3™, the Italian played the perfect game of risk vs reward to come out on top and take his eighth pole position, all after coming through Q1. He’s joined on the front row by Alonso Lopez (Estrella Galicia 0,0), who took his first podium last time out, with home hero Tatsuki Suzuki (SIC58 Squadra Corse) completing the front row. 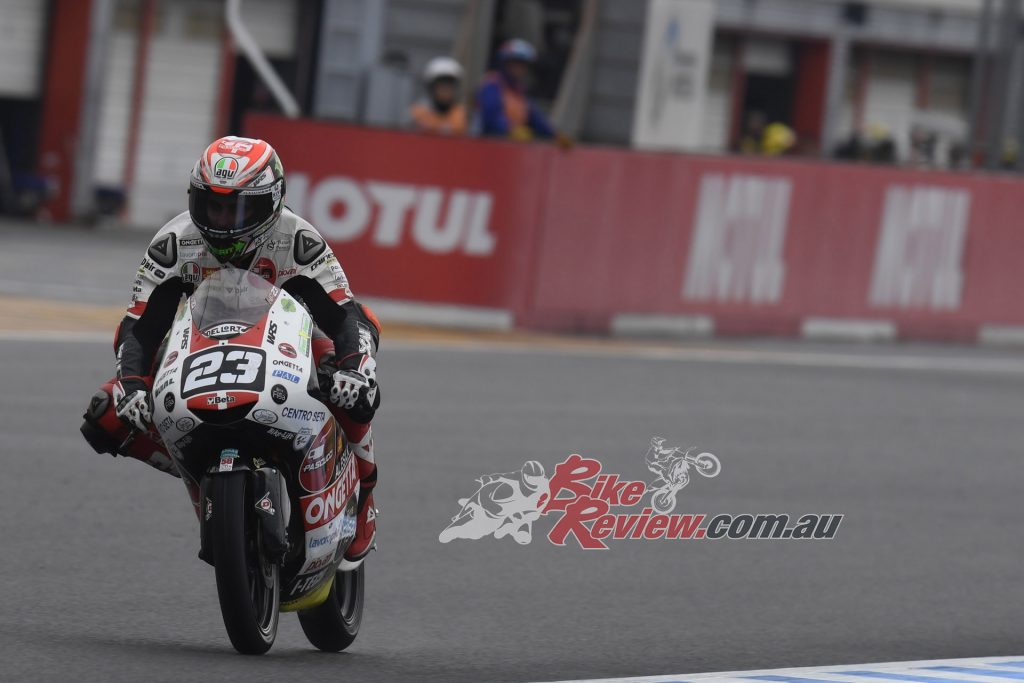 After a morning of rain, there was no chance of a dry out before Q1 began and for some it almost seemed to prove an advantage being in the first session – chance to test the conditions. Heading through were Lopez quickest and Antonelli second, joined by Sergio Garcia (Estrella Galicia 0,0) and Makar Yurchenko (BOE Skull Rider Mugen Race) in the fight for pole.

Once Q2 began, Lopez and Garcia were immediately up at the top again – with both already having been out on track and gained some experience of the conditions. In the end though, it was Antonelli who struck back late, the Italian able to pull out just under a tenth on Lopez and no one else in the same three-tenth postcode. The number 23 couldn’t improve on his final effort, but he’d already done enough to deny Lopez and P2 remains the Spaniard’s best qualifying so far. 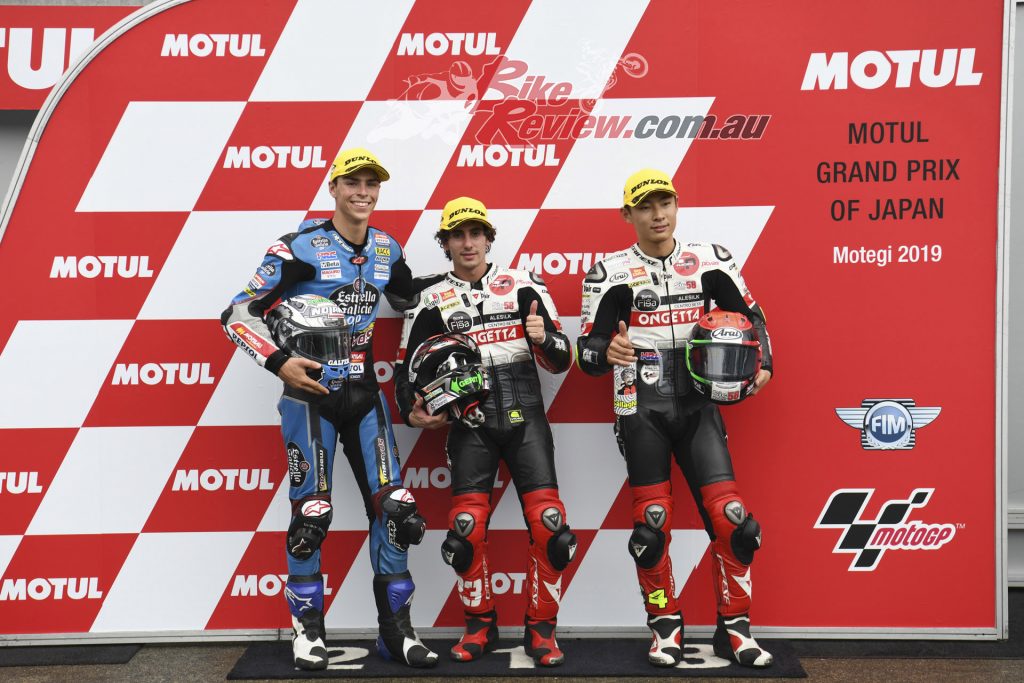 Behind Suzuki, who took the first front row for a Japanese rider in the lightweight category at Motegi since Tomoyoshi Koyama in 2007, Yurchenko and Garcia took P4 and P5 respectively, making it all Q1 graduates within the top five as they both put in their best qualifying performances to date. Championship leader Lorenzo Dalla Porta (Leopard Racing) had a slightly less bumpy Saturday to take P6 and complete the front row, a couple of places ahead of key rival Aron Canet (Sterilgarda Max Racing Team), who was eighth as veteran campaigner Jakub Kornfeil (Redox PrüstelGP) split the two contenders.