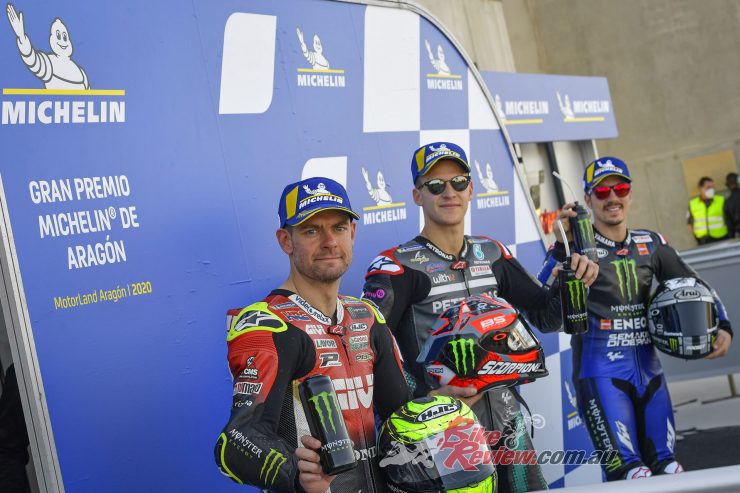 MotoGP News: Quartararo snatches pole from Viñales by half a tenth despite FP3 crash

Q1 started with enough drama already; not a single Ducati having made it through automatically by virtue of combined practice times. So it was going to be tight, and Ducati Team’s Andrea Dovizioso and Danilo Petrucci were running in tandem – Dovizioso ahead –for much of the session. Petrucci took to the top first and last, with Jack Miller (Pramac Racing) then ruining the Ducati Team party as the Aussie moved up to second. And that was it – Dovizioso was out, 13th on the grid and exceedingly unhappy. 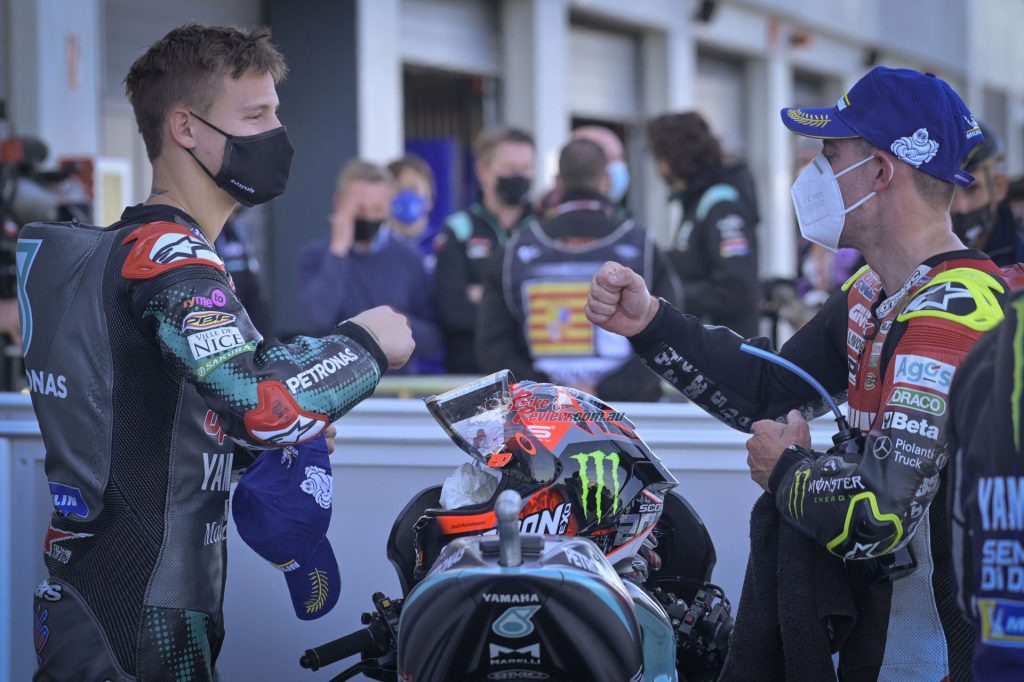 As Q2 got underway, Franco Morbidelli (Petronas Yamaha SRT) was the first to set a laptime but that was immediately beaten by Miller, a 1:47.657 coming in from the Australian to go top of the pile in the early stages. Quartararo slotted into P2 early doors before Morbidelli then snatched P2 back – and almost went top. Just 0.002 separated the number 21 from Miller, but there were plenty of red sectors lighting up the timing screens. Quartararo was one cause, shooting up to provisional pole, and following the Yamaha on track, Miller also improved. He stayed P2.

Morbidelli then made it a Petronas 1-2 again, and again with less than a tenth in it, as Viñales slotted into P4 after the first set of flying laps. Crutchlow was in fifth, with Aleix Espargaro (Aprilia Racing Team Gresini) sitting on the outside of the provisional second row. But that was all going to change as the riders slotted in fresh rubber, ready for their second runs… 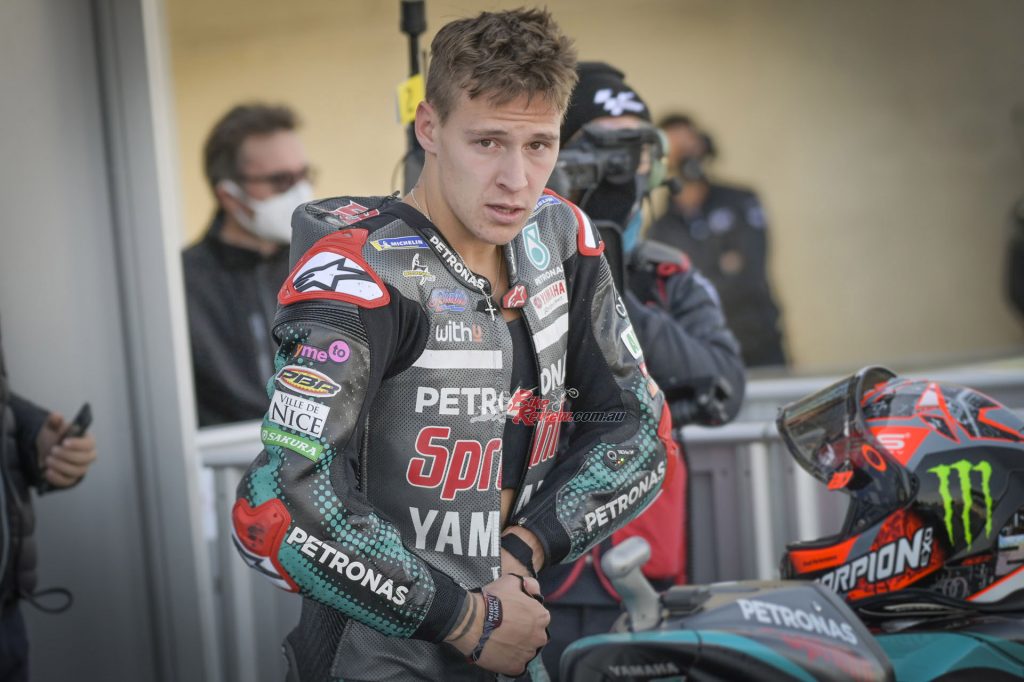 First up was Viñales, lapping alone, and he was 0.021 under Quartararo’s time in Sector 3. It only got better from there as he then leapfrogged his fellow Yamaha to take provisional pole by 0.171, taking over at the top. Crutchlow then crossed the line and moved up to P3 to shove Morbidelli down to head the second row, but the Italian was on a great lap and only 0.020 off in Sector 3. However, he then lost time down the back straight and despite setting a personal best time, the number 21 stayed P4. Viñales was then setting an almost identical lap time to his current P1 best, and the number 12 came across the line to go every so slightly quicker – but it was ultimately just 0.003 gained. 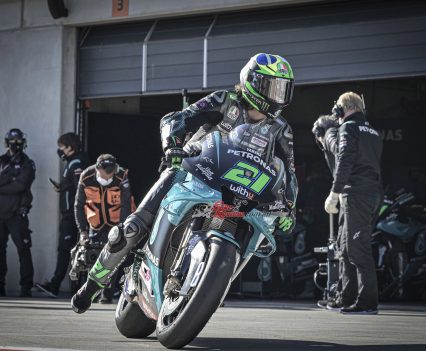 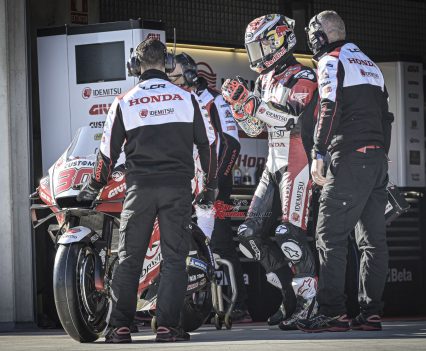 However, Quartararo had one more lap. The Frenchman was just through his first sector and up, and he kept it as he headed through Sector 2 0.073 faster than Viñales. Could he hold onto it? It was the latter half of the lap where Quartararo really gained time. Heading onto the almost 1km long back straight, the title chase leader was over a tenth and a half under Viñales’ best and despite losing over a tenth in the final split, the number 20 just kept it together to take pole by 0.046 seconds after yet another phenomenal final flying lap.

In terms of the front two rows, that was all she wrote so it’s a Yamaha 1-2 as Quartararo digs deep to claim Saturday honours, but Viñales has every chance of fighting for victory from second. Crutchlow makes a welcome return to the front row as the British rider finds form despite still nursing his arm injury, the LCR Honda man finishing 0.229 adrift of pole. Morbidelli was just 0.012 shy of the front row but it was a good day for the Italian and Yamaha on a circuit that hasn’t necessarily suited the YZR-M1’s characteristics in the past… 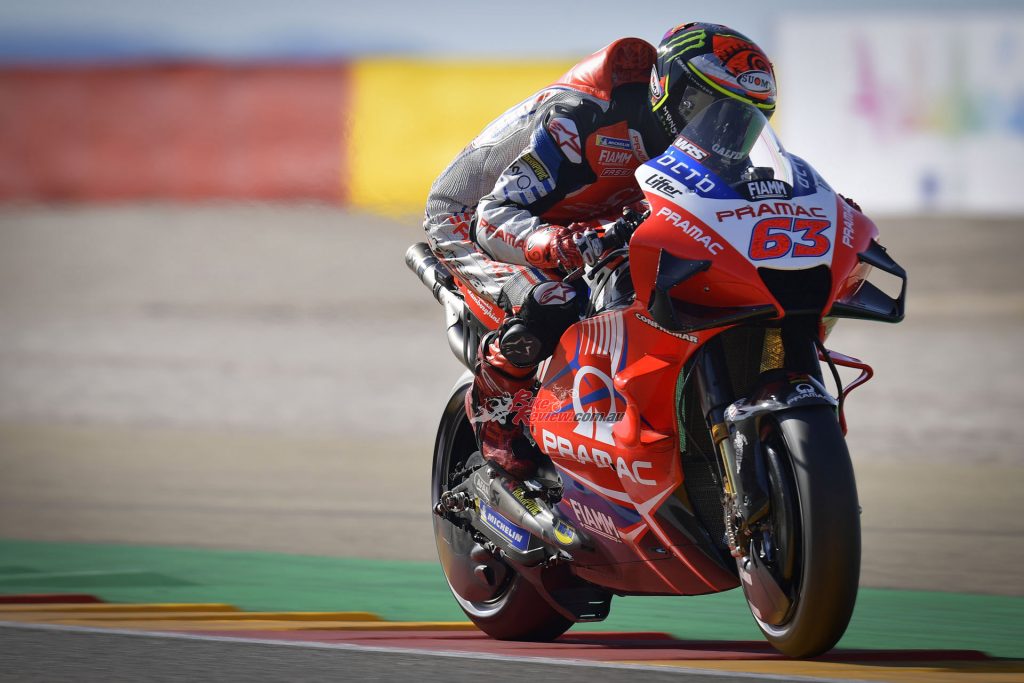 After graduating from Q1, Miller claims a solid P5 to fly the Ducati flag in Aragon, the Australian fuming after his FP3 time – that was good enough for the top 10 – got chalked off due to Yellow Flag infringements, but amends made in the afternoon. Championship contender Joan Mir (Team Suzuki Ecstar), meanwhile, will line-up in his best grid position since the Styrian GP. Suzuki’s strength doesn’t usually show on a Saturday afternoon compared to race day, so the signs are good for Mir and the Mayorcan should be one to watch on Sunday. 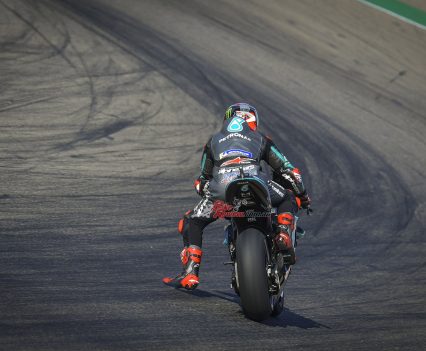 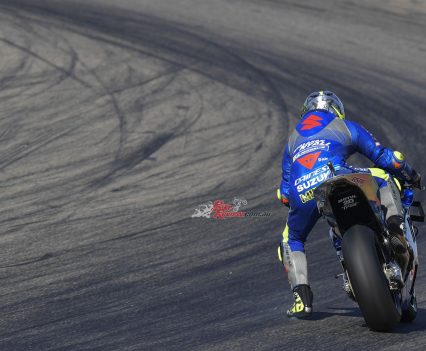 Takaaki Nakagami (LCR Honda Idemitsu) set his personal best time on his final flying lap, and the Japanese rider ended up less than a tenth off Mir’s time to spearhead Petrucci and Aleix Espargaro on Row 3. The latter, younger brother Pol Espargaro and Repsol Honda Team’s Alex Marquez had a bit of an incident in Q2 as the Aprilia, Honda and KTM all ended up sandwiched together at the final corner. 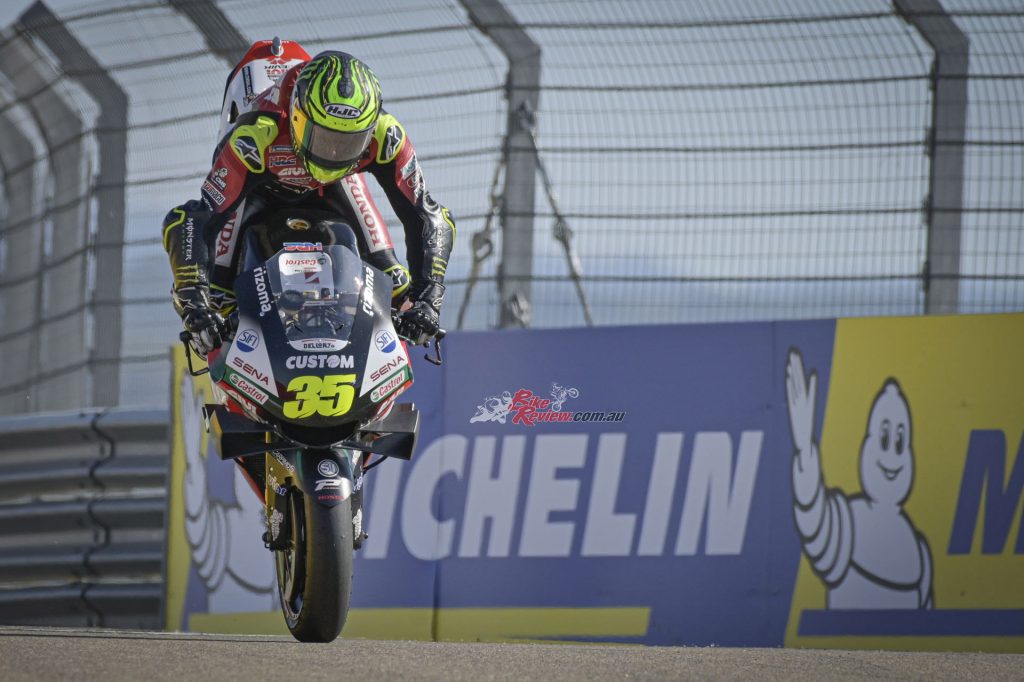 Team Suzuki Ecstar’s Alex Rins completes the top 10 on home turf, with Alex Marquez cementing his best MotoGP™ qualifying result in P11, and after heading through to Q2 for the first time. After the incident earlier in the session and a little damage to his KTM, Pol Espargaro had to settle for P12.

In Q1 it was Red Bull KTM Ajo’s Jorge Martin and Tetsuta Nagashima heading through on top, joined by Simone Corsi (MV Agusta Forward Racing) and Tom Lüthi (Liqui Moly Intact GP) as the four got ready to fight it out again for the top 18 positions on the grid, leaving behind a few surprises such as Marcel Schrötter (Liqui Moly Intact GP) and Xavi Vierge (Petronas Sprinta Racing). But the clock was reset, and it was go-time for Q2. 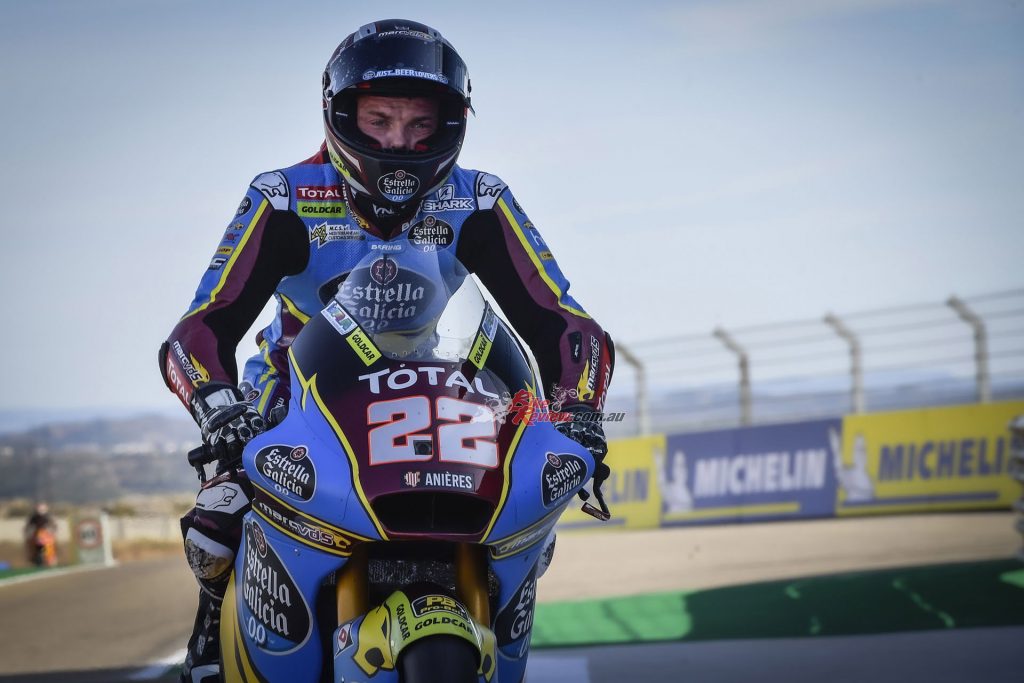 It was Di Giannantonio who came out the blocks fastest in the second part of qualifying. A 1:52.364 was a decent banker lap time but it was soon beaten by Championship leader Marini, with rookie Marcos Ramirez (Tennor American Racing) then taking over at the top as he sat just behind Marini on track. Fortunes then favoured Jake Dixon (Petronas Sprinta Racing) as the British rider became the first ever Moto2™ rider to set a sub-1:52 at MotorLand Aragon, although the stunning lap was soon bettered by Diggia as the Italian took back to the top.

Out of nowhere, Bezzecchi then produced a sterling final sector to take provisional pole, making it an Italian 1-2 at the summit and Lowes lurking down in P10 with just three minutes to go. The number 22 was soon #OnIt though and at the third checkpoint, the Brit was a whopping four tenths quicker than Bezzecchi. Surely pole position was his with just the back straight and final two corners to navigate? Lowes flew across the line to do exactly that, but he did lose three tenths in the last split. Not that it matters though, the number 22 snatching P1 by 0.148.

No one else could challenge in the closing stages so Lowes will start from his first pole position since the 2016 Aragon GP – a race he went on to win. Bezzecchi will also be looking to close down the points gap from second, with Diggia completing the front row – his first since the 2019 San Marino GP. Dixon’s 1:51.999 was a firecracker of a time and yet, he’s not on the front row. Nevertheless, it’s a Moto2™ best qualifying for the sophomore who continues to show fine form. Lining up next to Dixon in P5 is another rider who claimed a career-best Moto2™ qualifying result – Ramirez. The Spaniard has been on form all weekend and will be hoping – at least – a top 10 challenge is on the cards. 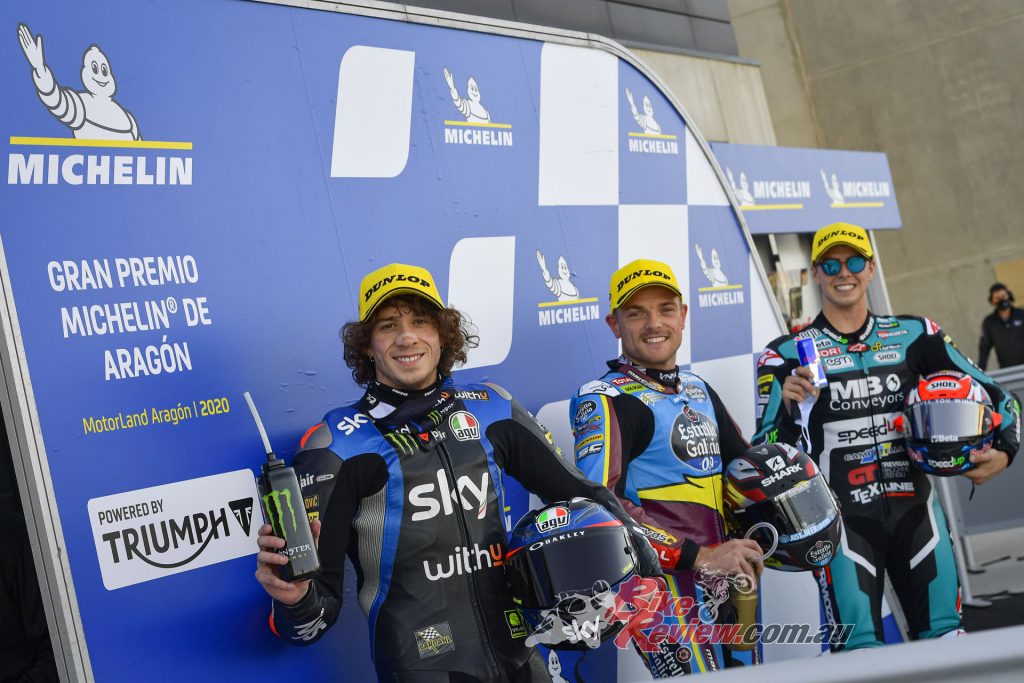 Jorge Navarro (MB Conveyors Speed Up) was also under the former lap record, but has to settle for P6. Spearheading Row 3 is Marini who gets bumped back after Lowes’ late lap, far from a disaster for the Italian but it looks like he has plenty of work on his hands to try and stop Lowes or Bezzecchi closing his Championship gap further. Q1 graduate Jorge Martin salvages a P8 starting slot after finishing Free Practice in P19, the Spaniard ahead of compatriot Augusto Fernandez (EG 0,0 Marc VDS) and Remy Gardner (Onexox TKKR SAG Team) as the duo round out the top 10. Enea Bastiaini (Italtrans Racing Team) – the man second in the Championship – starts from his second-worst qualifying place of the season in P12, just behind 11th place Joe Roberts (Tennor American Racing).

Moto3
Raul Fernandez (Red Bull KTM Ajo) backed up going fastest on Friday by taking a fourth pole position of the season at MotorLand Aragon, the Spaniard coming out on top in a duel with Le Mans winner Celestino Vietti (Sky Racing Team VR46) by just 0.059.

In Q1 there were a few key names looking to move through, including John McPhee (Petronas Sprinta Racing) and Gabriel Rodrigo (Kömmerling Gresini Moto3) as the two had laps cancelled late on in FP3 after Yellow Flags invalidated them- The two moved through behind Carlos Tatay (Reale Avintia Moto3) at the top of the session and Ayumu Sasaki (Red Bull KTM Tech 3) in second, with the clock was then reset and the four joining the rest fighting it out for the top 18 places on the grid. 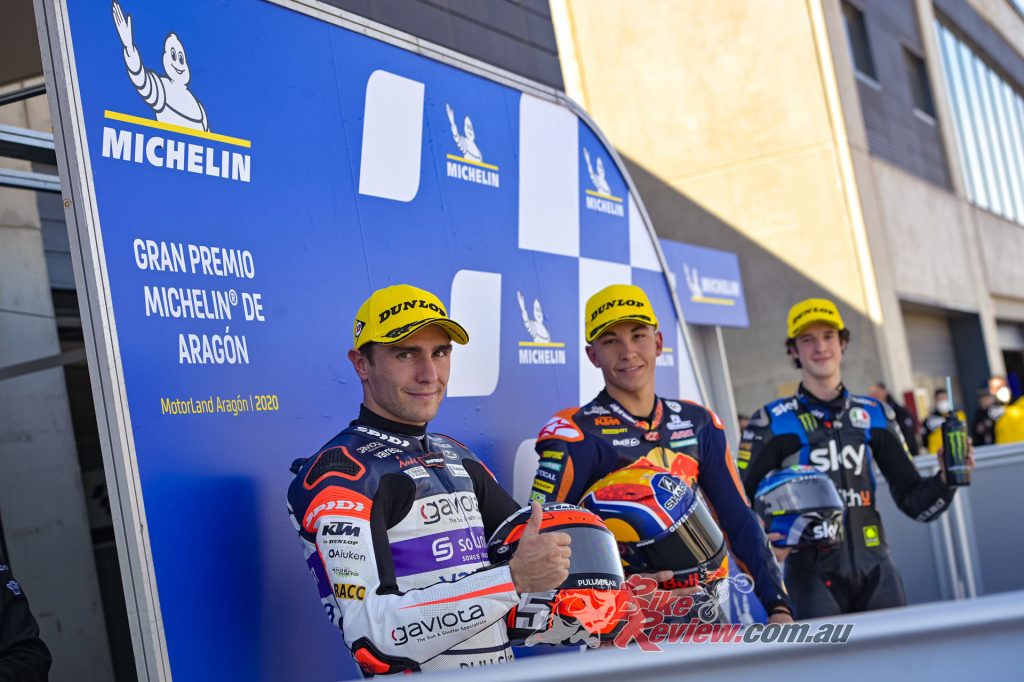 CIP – Green Power’s Darryn Binder was the first man to top the timesheets early on in Q2, before John McPhee hit back to take over and immediately depose the South African. And then came Fernandez: the Spaniard hit the top soon after, then later going even faster to bang in a 1:57.681.

Only 11 riders had set a lap mid-session, however, so would the tables turn? With a couple of minutes left, Vietti managed to leapfrog the two Sterilgarda Max Racing Team riders, Alonso Lopez and Romano Fenati, who had been in P2 and P3 respectively, to become the closest challenger to Fernanez’ impressive lap. Vietti was now within a couple of tenths and on another solid lap, and in even better news for the VR46 Academy rider, he was setting his laps on his own too… something that most definitely bodes well for race day.

It all came down to the final push for the number 13, and he got even closer as he stayed in touch with Fernandez’ time throughout the lap. Could he do it? Ultimately no, but it was incredibly close as the Italian crossed the line just 0.059 off Fernandez, with no one else able to challenge the number 25. 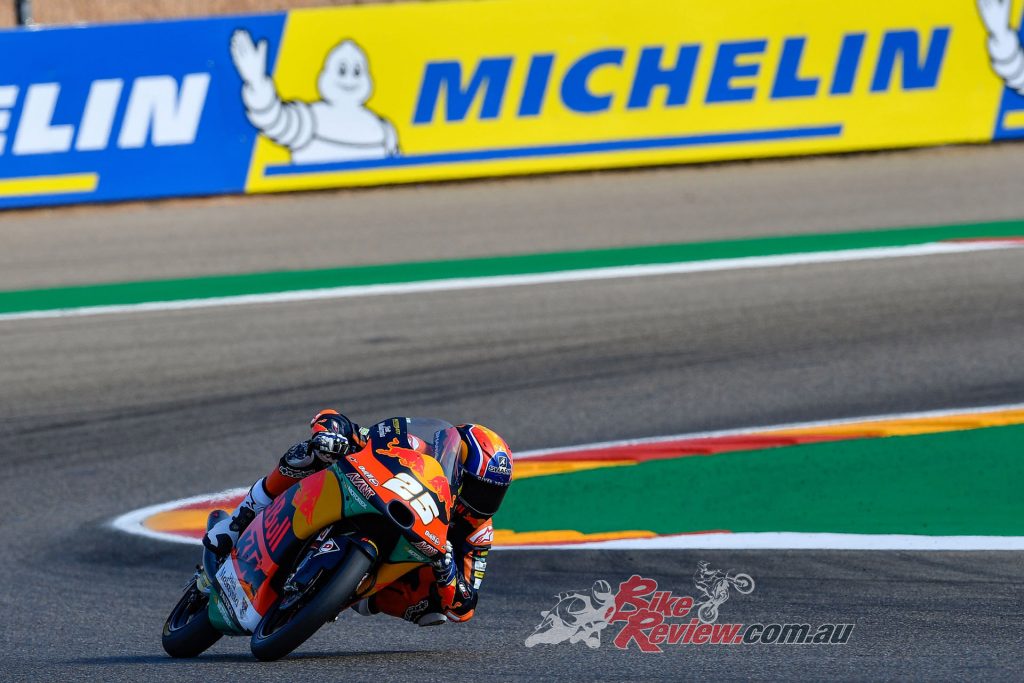 Arenas moved up on his final lap to take the final place on the front row, with Alonso Lopez shuffled down to fourth but nevertheless putting in an impressive session as he keeps his recent pace rolling. The number 21 will, however, have to take a Long Lap Penalty in the race that he was given following his collision with teammate Fenati last time out. Tatsuki Suzuki  (SIC58 Squadra Corse) denied that same Fenati fifth on the grid as the Japanese rider pipped the Italian by just 0.004, pushing the number 55 down to P6.

Tatay went from Q1 to seventh, joined on the third row by Championship challenger Ai Ogura (Honda Team Asia) and another Q1 graduate: Rodrigo. McPhee completes the top ten, missing out to Rodrigo by just 0.001 but beating Darryn Binder by 0.012 as the South African starts just outside the top ten.